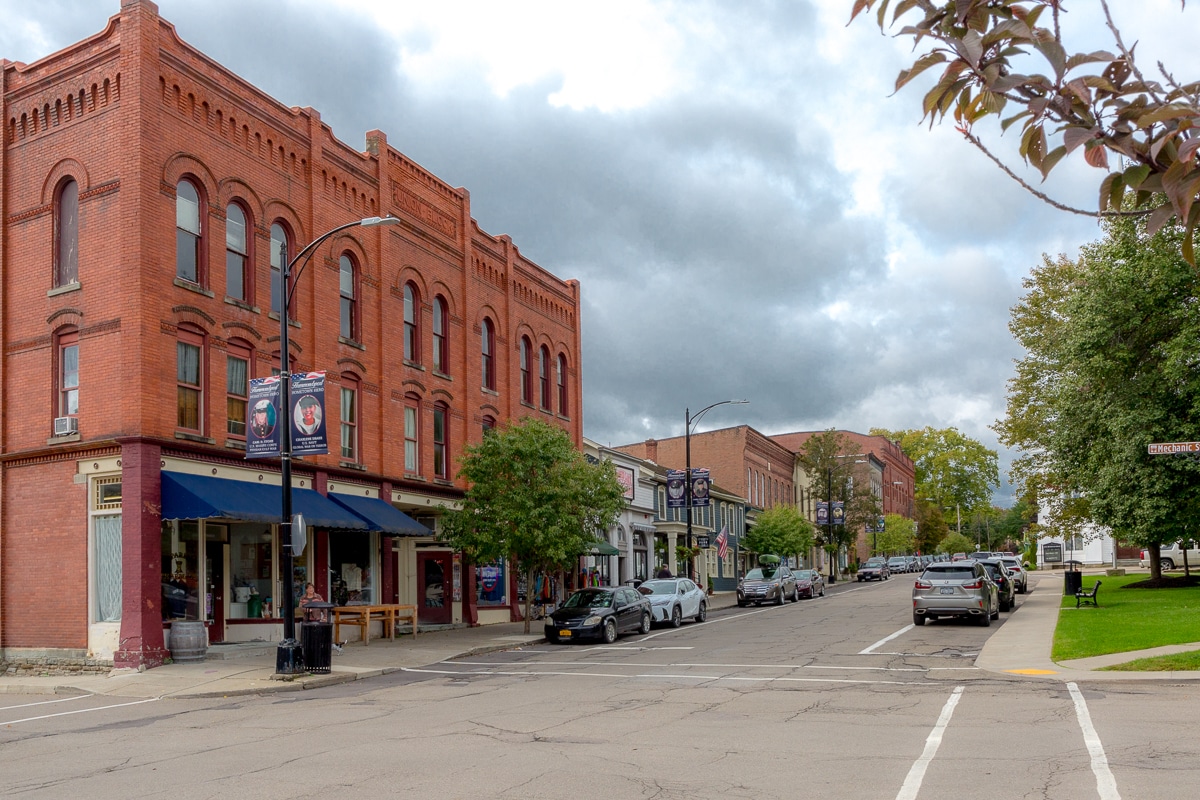 Hammondsport, New York, situated at the southern end of Keuka Lake, is a quiet town with a population of fewer than 1,000 residents. It has been a popular destination since the mid-1800s, mostly due to proximity of all kinds of outdoor activities. Keuka Lake, the most distinct of all the Finger Lakes, has an unusual Y-shape, and is surrounded by steep vineyard-covered slopes. It was dubbed “Crooked Lake” by early settlers. 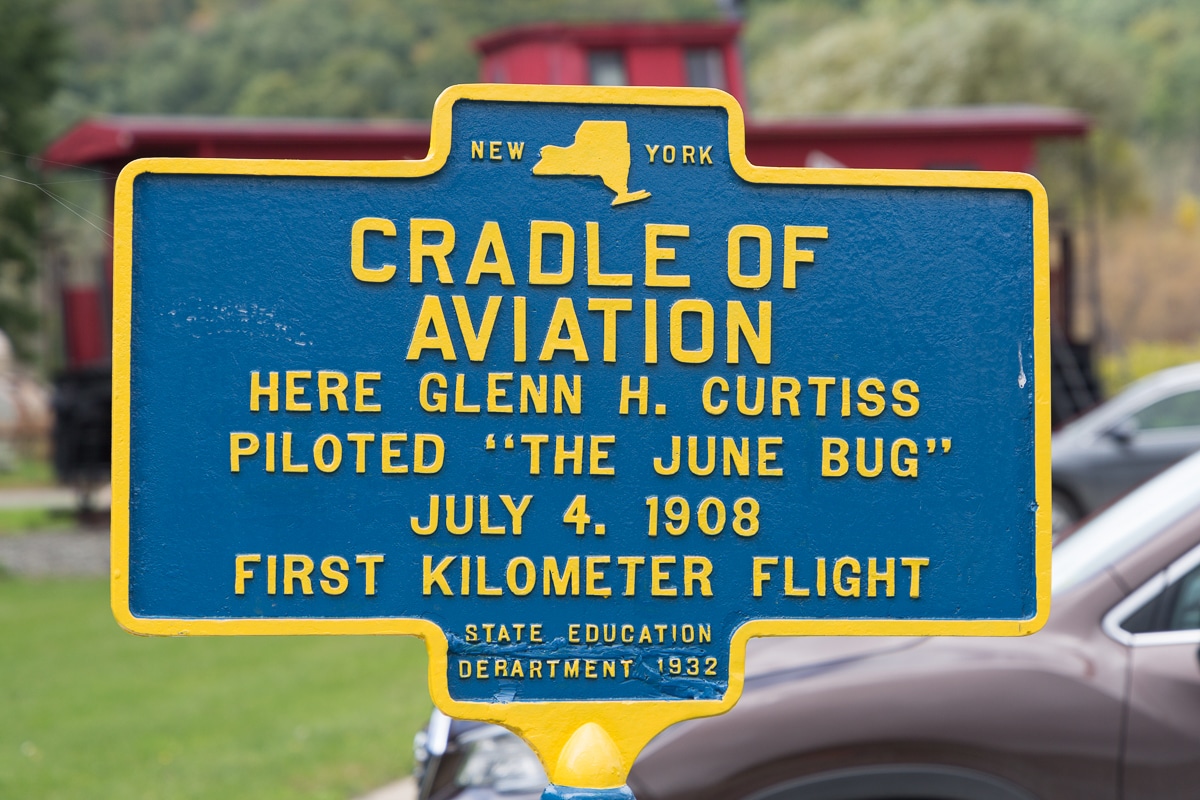 I had read about The Glenn H. Curtiss Museum in Hammondsport, often called one of the hidden gems of aviation history, but really didn’t know much about Glenn H. Curtiss. As it turns out, Curtiss was a rather significant pioneer in American aviation. 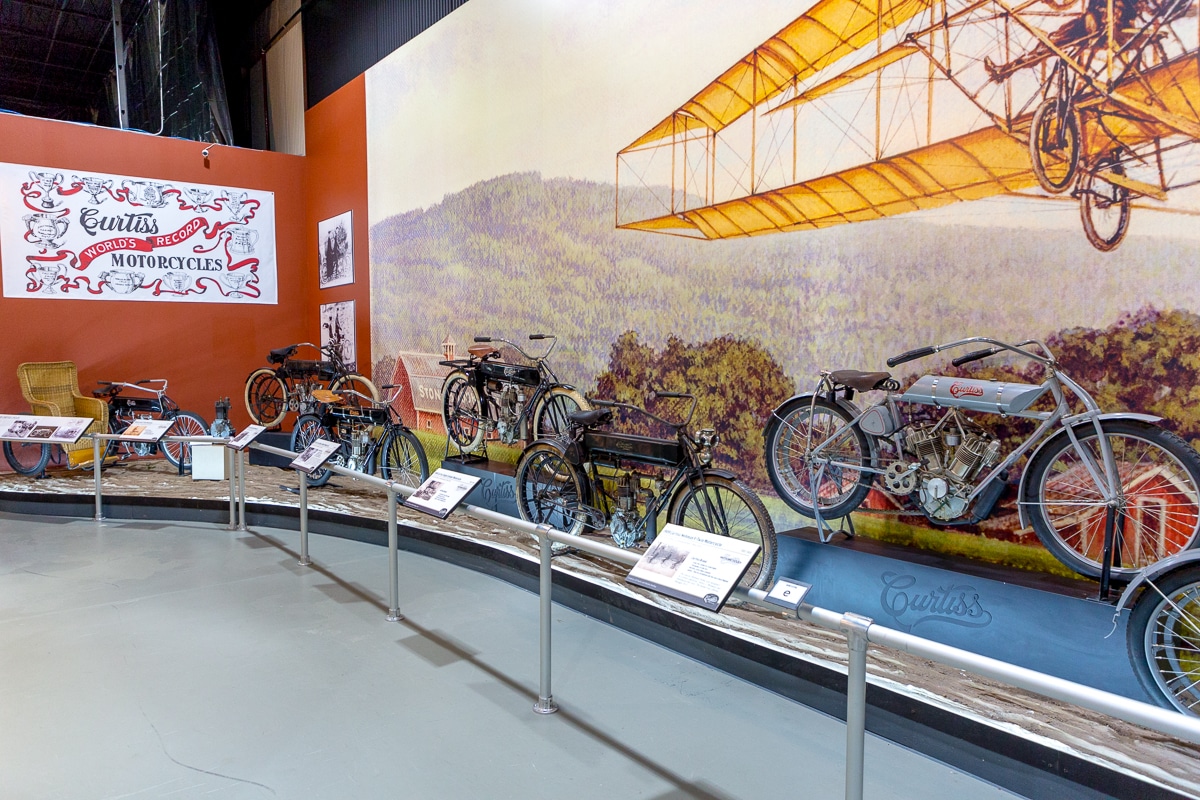 Glenn H. Curtiss, like the Wright brothers, began by building and racing bicycles. Moving on to motorcycles, he set a world land speed record in 1907 at Daytona, Florida. Then on July 4, 1908, Curtiss won the Scientific American Trophy with a straight-line flight of one kilometer flying his “June Bug” (the Wright’s first flight was December 17, 1903). Later, his model JN-4 or “Jenny” would be America’s most famous World War One airplane. He is not as well-known as the Wright Brothers, but perhaps he should be. 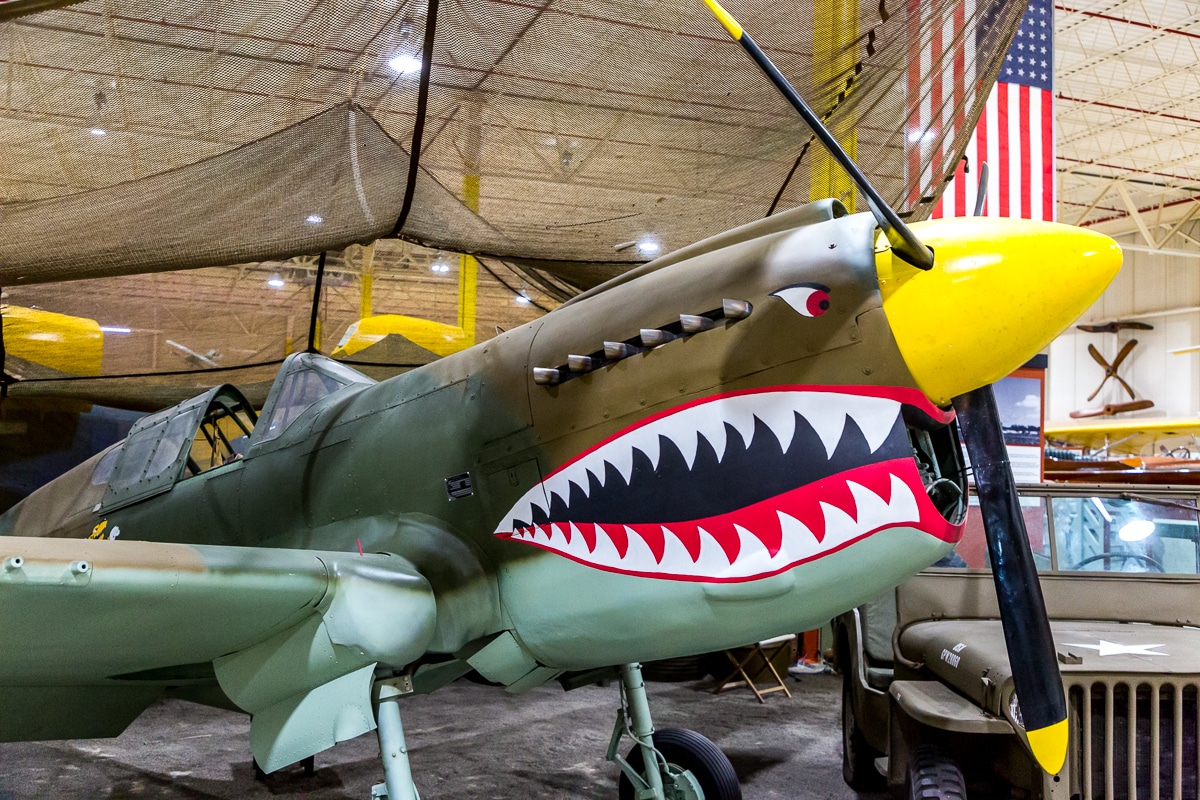 The Curtiss Museum was a fascinating exibition that mapped the development of technologies at the end of the 19th and the start of the 20th Centuries that led from bicycles to motorcycles to flight. The exhibits are well presented and easy to understand for non-technical types and was well worth the drive to visit Hammondsport and the Glenn H. Curtiss Museum. 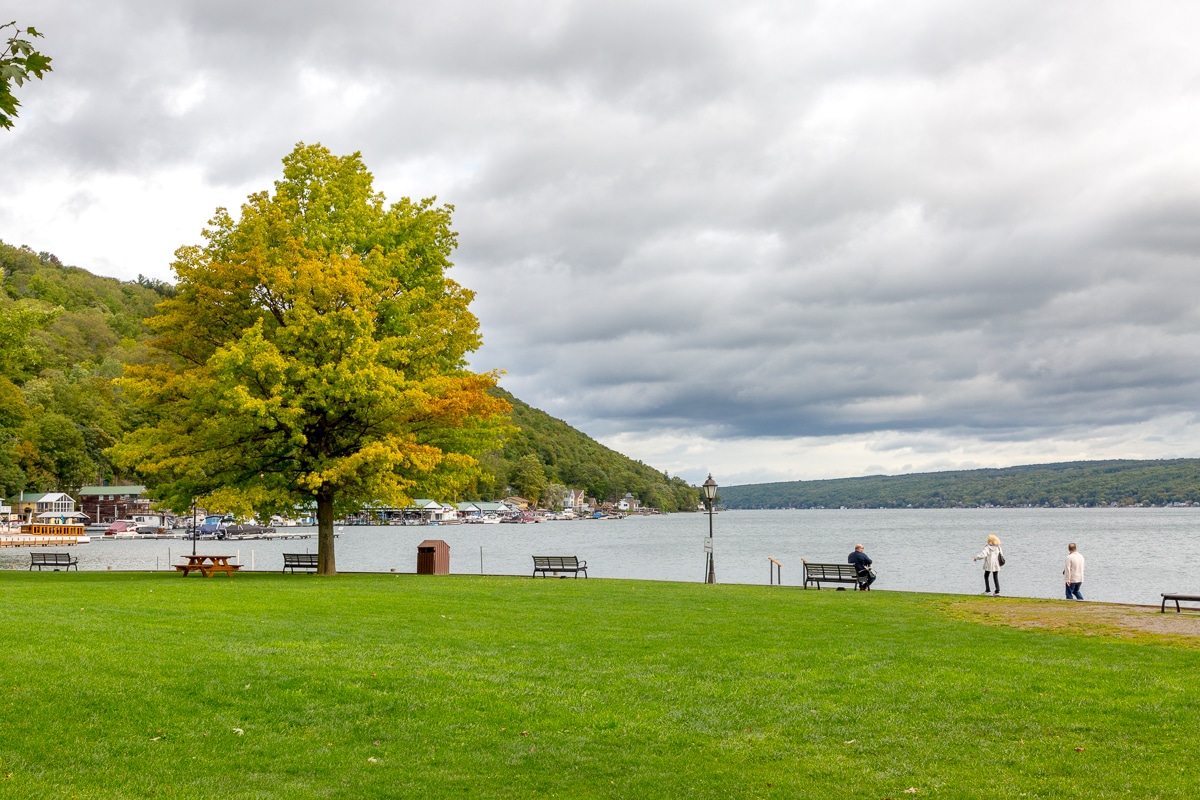 After departing the museum, we had a picnic along the shore of Keuka Lake in Hammondsport. Though it was a little cool, with a slight breeze the location was beautiful.

Driving north along the western side of Keuka Lake, the hills sweep down to the water punctuated by wooded gorges that separate the vineyards. The region is considered one of the great wine regions of the world and we hadn’t yet stopped for a wine tasting. 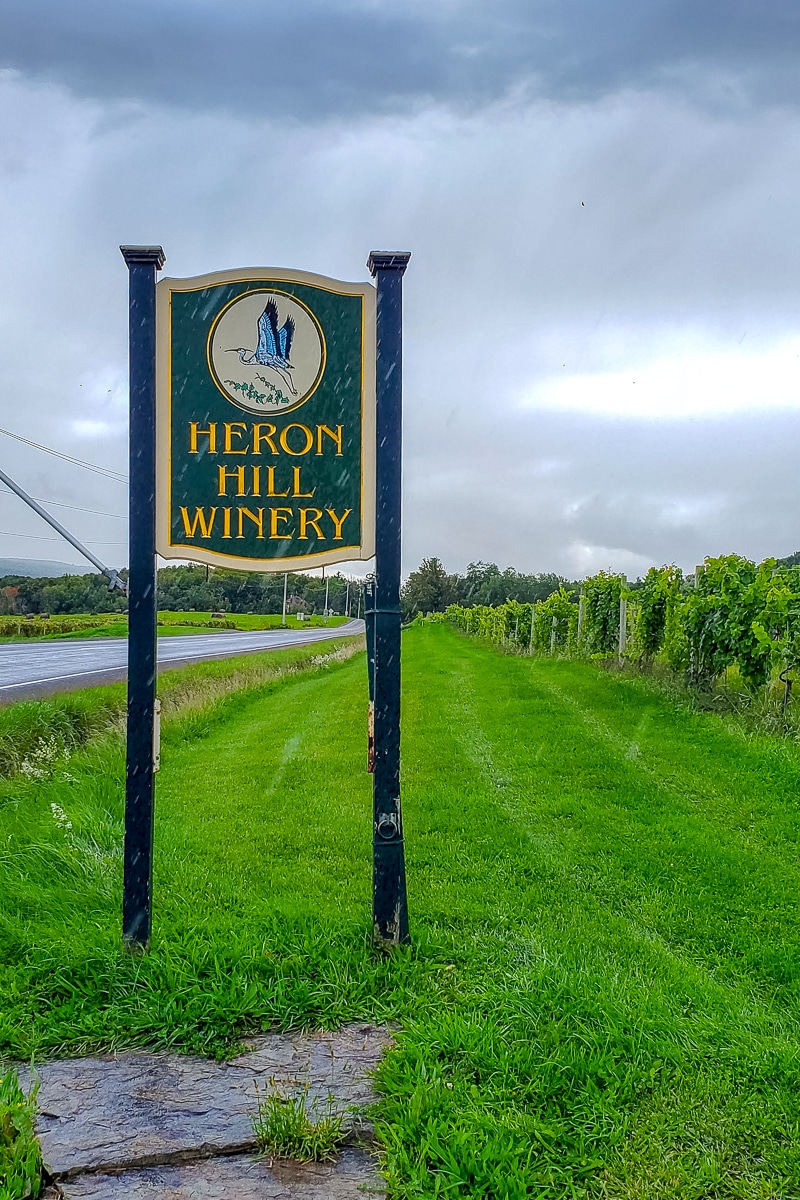 Luckily, Heron Hill Winery, one of the (many) wineries that had been highly recommended, was on our route and possessed one of the best scenic Keuka Lake views!

Settling in at a table near the massive windows that overlook some of the vineyards and, beyond, the lake. The cost of the tasting was reasonable, and we could each choose five wines to taste. The pours were generous such that we could each have a good taste of 10 different wines, … and we did. 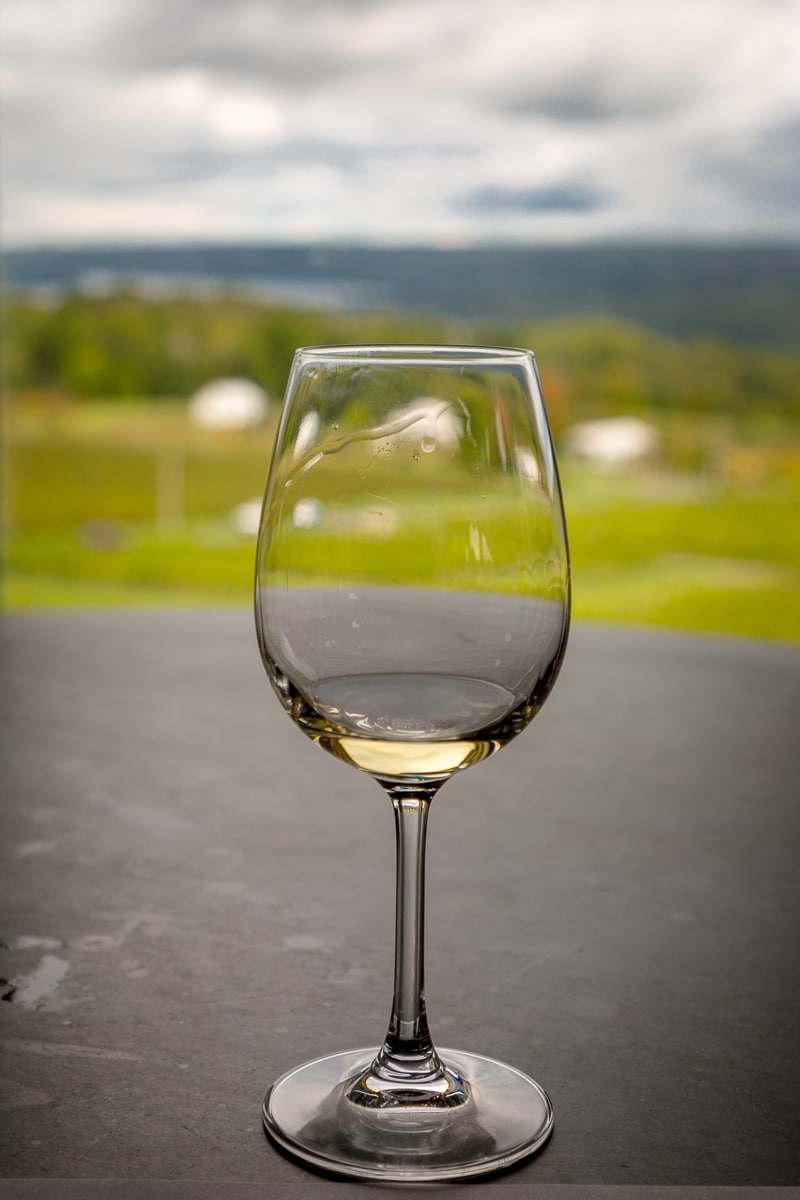 The wines we tasted ranged from delicious to forgettable, keeping in mind that we tend to prefer wines different from the regional styles grown here. Still, we had a wonderful time, learned a lot, and picked up a tasty Chardonnay for later.

As we were leaving the winery, we asked the two young ladies at the reception desk for a scenic spot they would recommend for our drive home. “It’s a little out of the way, but not far,” she said, and she was right, and the side trip was well worth it. The route took us down the aptly named Skyline Drive, which traverses the spine of Keuka’s bluff, an expansive seven-mile promontory that divides the lake’s two arms of the Y-shaped lake. Our destination was near the end of that road. 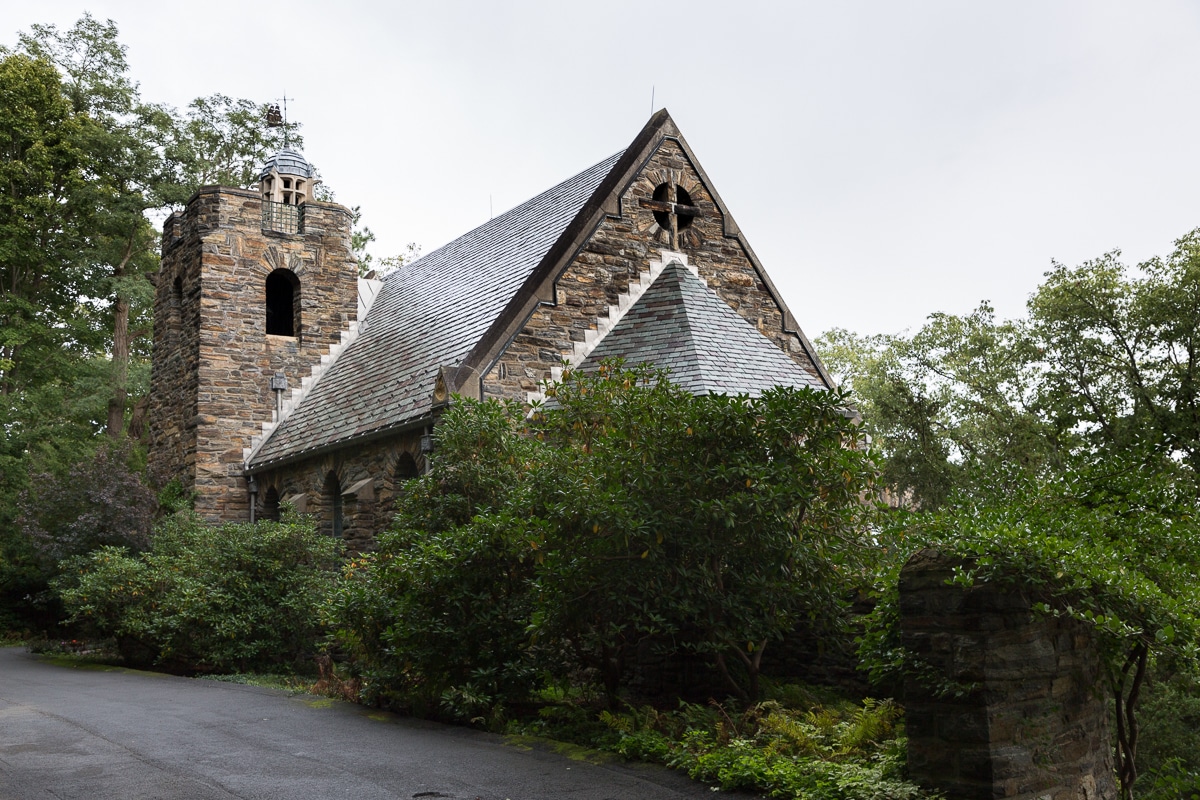 She had directed us to the Garrett Memorial Chapel that sits on land that was once producing grapes from 1902 until 1940. Garrett and Company was among the largest wine producers in the world, with much of the grapes grown here on approximately 4000 acres of land. Today, the Chapel is the last remnant of this one-time empire. The chapel was erected in memory of the Garrett’s son Charles, who died of tuberculosis in 1929.