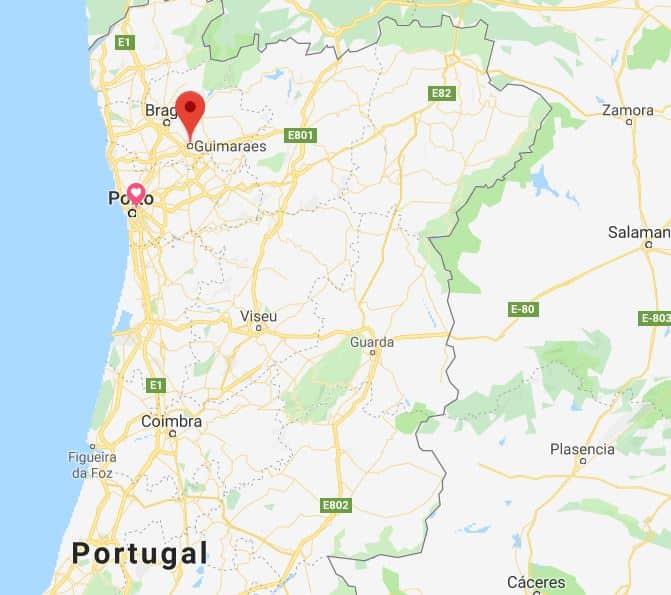 Guimarães (him-are-esh) has wonderfully preserved its past. The old city center is a labyrinth of narrow lanes and charming plazas framed by medieval edifices and was recognized by UNESCO in 2001 as a World Heritage Site. But its history and significance is believed to extend back more than 7000 years.

It is estimated that permanent settlements existed in the area since the late Neolithic/ Chalcolithic era. There is also evidence of Roman occupation, and a stone dedicated to the Roman emperor Trajan suggests that this was already a spa town in Roman times. 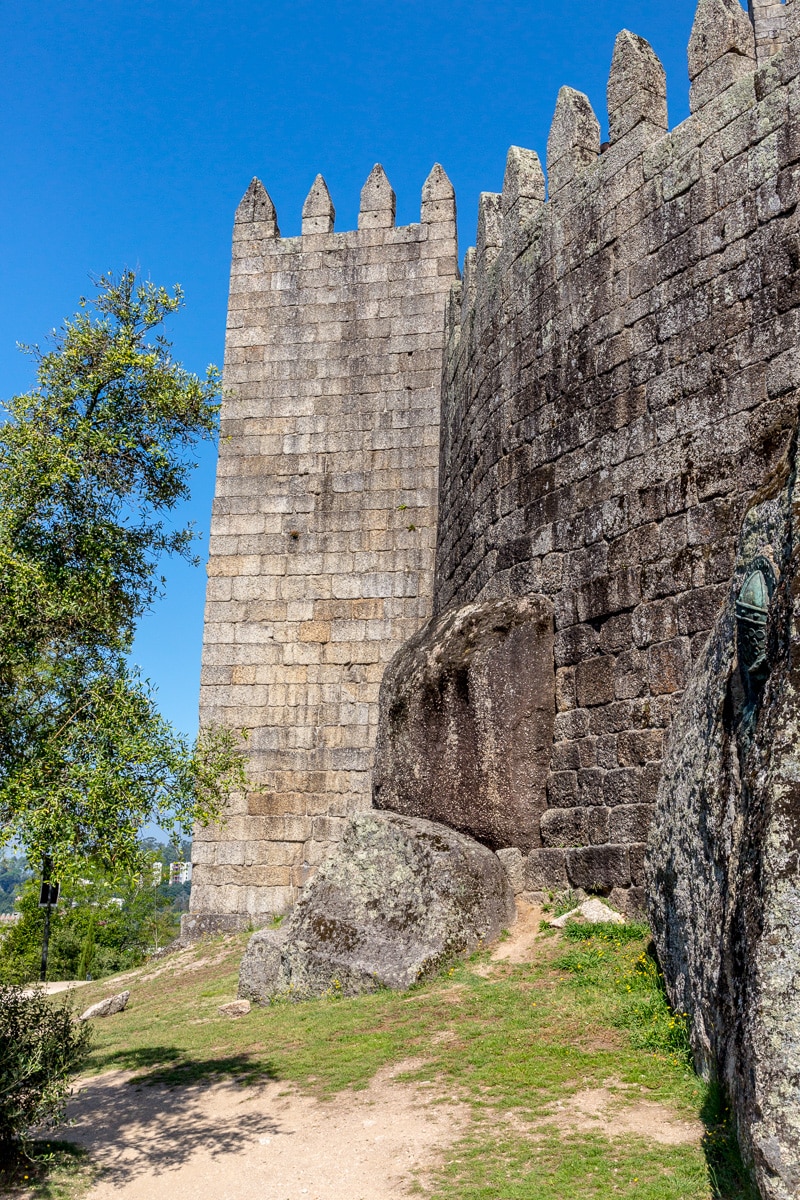 In the 10th century the Castelo de Guimarães, constructed on the foundations of a much older Roman structure, was built to protect the monks and the rest of the Christian community that lived nearby from attacks by Moors and Vikings. The first independent king of Portugal, Afonso Henriques (Afonso I), was born here sometime between 1106-1111, marking the beginnings of the Portuguese nation.

Afonso I later used the city to launch the main Portuguese campaign of the Reconquista, a series of crusades by Christian states to recapture territory from the Moors, who occupied most of the Iberian Peninsula in the early 8th century. These victories afforded him the nicknames of the Conqueror (O Conquistador), the Founder (O Fundador) or the Great (O Grande) by the Portuguese. 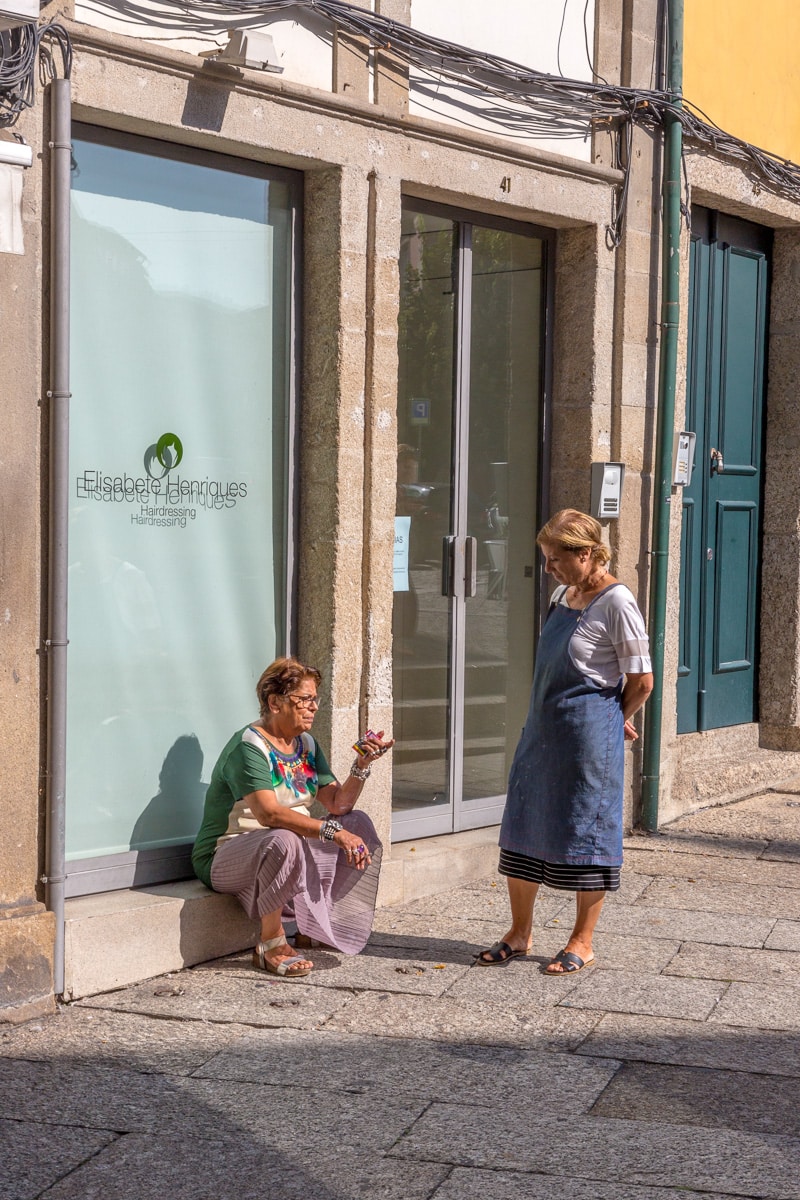 We began our journey to Guimarães by taking the 8:25 train from Porto. The trip could have been shorter, but our train was one of the “local” trains that tend to stop at every small town along the way. Still, it was only a bit longer than an hour.

The town was just getting active when we arrived, and we had some time to wander. But it wasn’t too long before the bus-tour groups, following their leaders with their identifying umbrellas or flags, began to fill the plazas and streets. This was our signal to head away from the city center.

Locating the Tourist Information office, we armed ourselves with a map and some suggestions. First would be to visit the Castelo de Guimarães and then make the 20 min walk to take the 1700m (~1 mile) ride in a cable car to the 617m (2024ft) summit of Serra da Penha, the highest point near Guimarães. 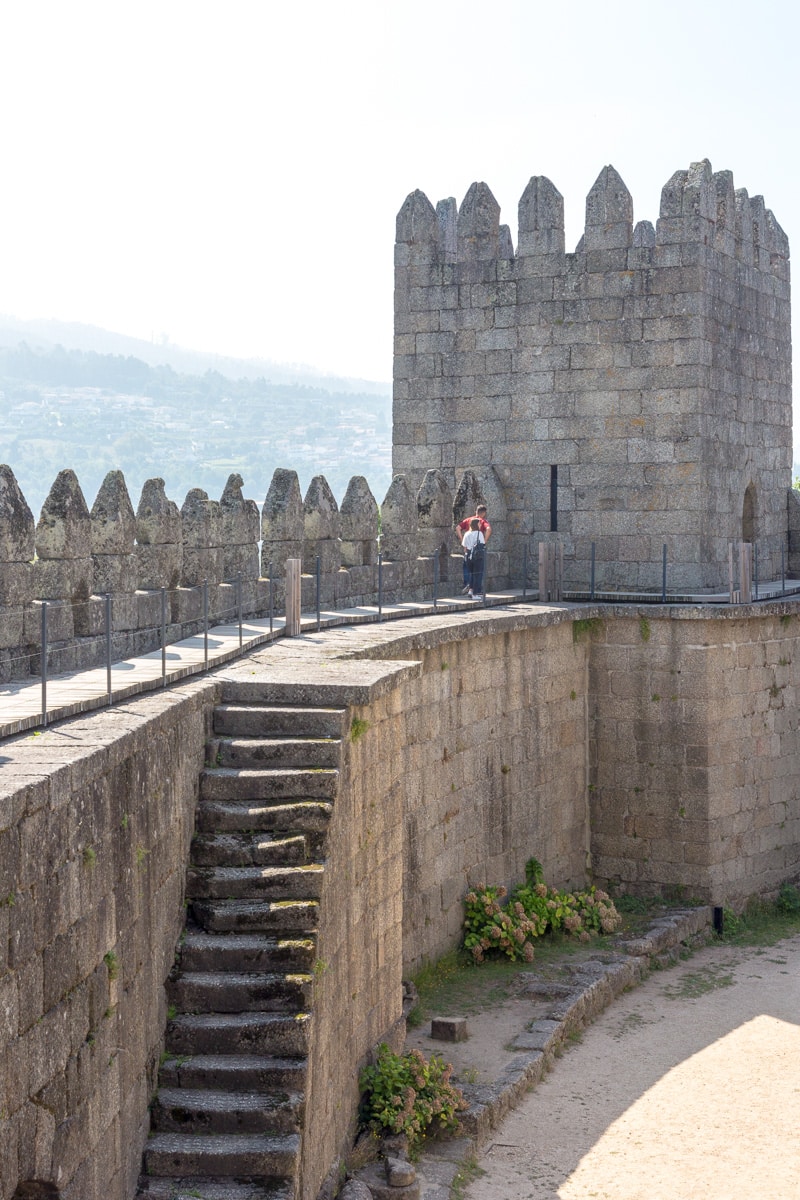 The castle was rather small, but interesting. We walked the battlements on the walls, within the square keep of the castle and around its central tower and eight rectangular towers. The visit didn’t take too long and soon we were off to the mountain.

The cable cars were making their way up and down the mountain when we arrived, and on paying the modest fee, we hopped into the almost spherical car for the 10-minute ride to the top.

The first stop after leaving the cable car was a brief visit to the Santuário de Nossa Senhora do Carmo da Penha – Shrine of Our Lady of Carmo da Penha, designed by the famous Portuguese architect Marques da Silva. Work began on the Modernist-style shrine in 1930, but it wasn’t inaugurated until 1947. 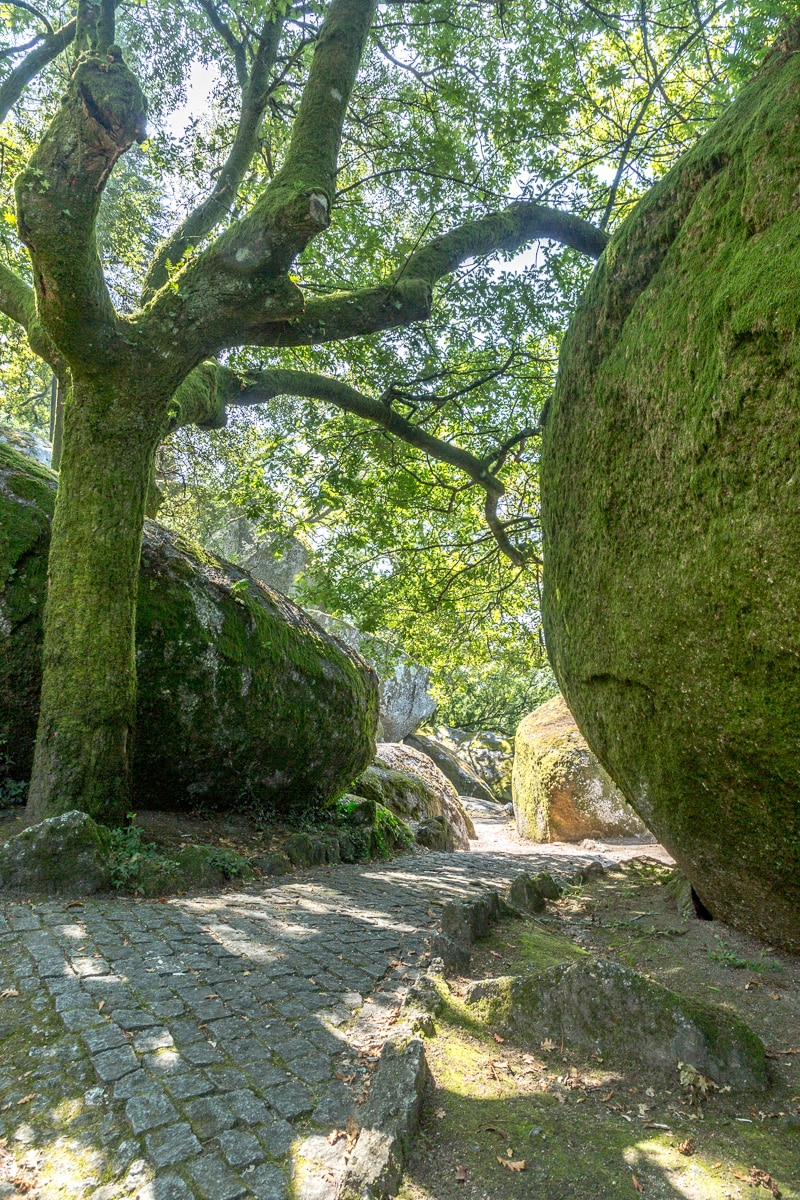 However it was the park and woodlands surrounding the shrine that interested us. The mountaintop is littered with massive boulders, many cut with steps, or forming secret grottoes. The woods make it a cool, wonderful escape from the city and its summer heat.

After a bit of roaming, we were beginning to get hungry and it was just past noon, so making our way to the services area on one side of the park we found a number of cafes and mass-produced food options, but nothing that appealed to us. However, walking further, we saw a small sign and menu that pointed down and around toward Adega do Ermitão. 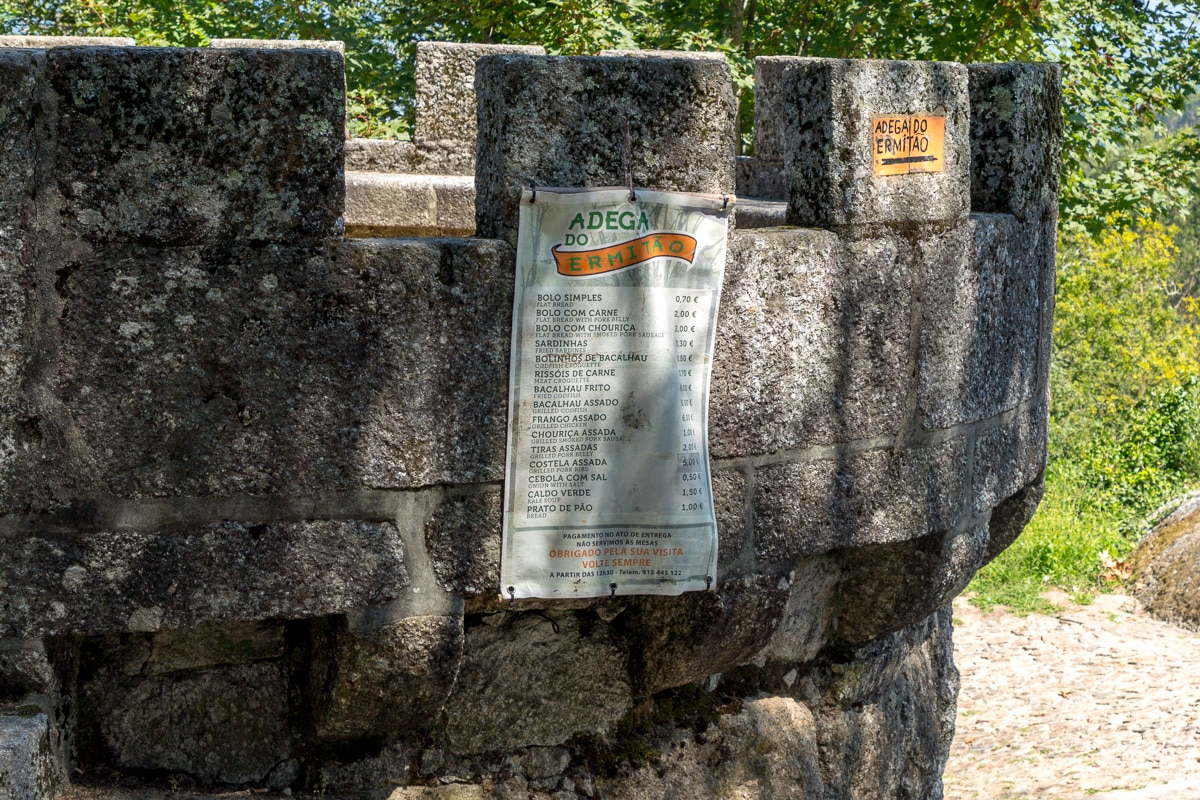 Looking over the stone wall, down below was a rustic, simple outdoor place, where one waited in line to order and then eat at picnic tables scattered beneath the trees and amongst giant boulders. There were no trays or plates, as the food was wrapped up in bakery paper for carrying. Operating under a corrugated steel roof and tarps the open-sided kitchen has, for over 40 years, gained fame for its unique location and local gastronomic offerings: grilled meats and fish, sardines, codfish balls, wood-fired oven baked flatbreads, and homemade vegetable soup fresh from the kettle. It was quite an experience, delicious, fun, and very inexpensive. 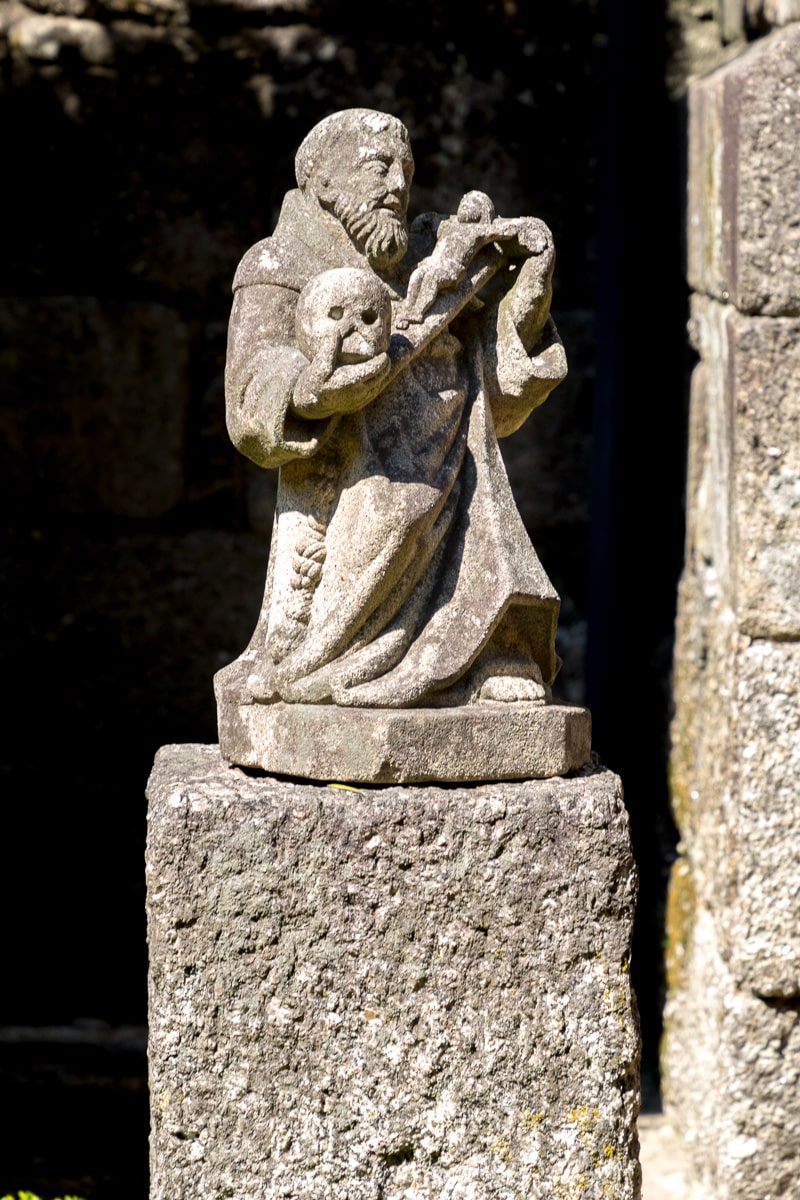 After a little more roaming around the boulders, we took the cable car back down for some more roaming. By this time the tour groups were hiding from the heat, but the intense sun made any attempts at photography almost impossible due to the high contrast light. So we opted to take in the Museu de Alberto Sampaio.

Built around the Romanesque cloister of Igreja de Nossa Senhora da Oliveira, this museum has an interesting collection of ecclesiastical art and religious regalia. One interesting item was the tunic reputedly worn by King João I at the Battle of Aljubarrota in the 14th century. 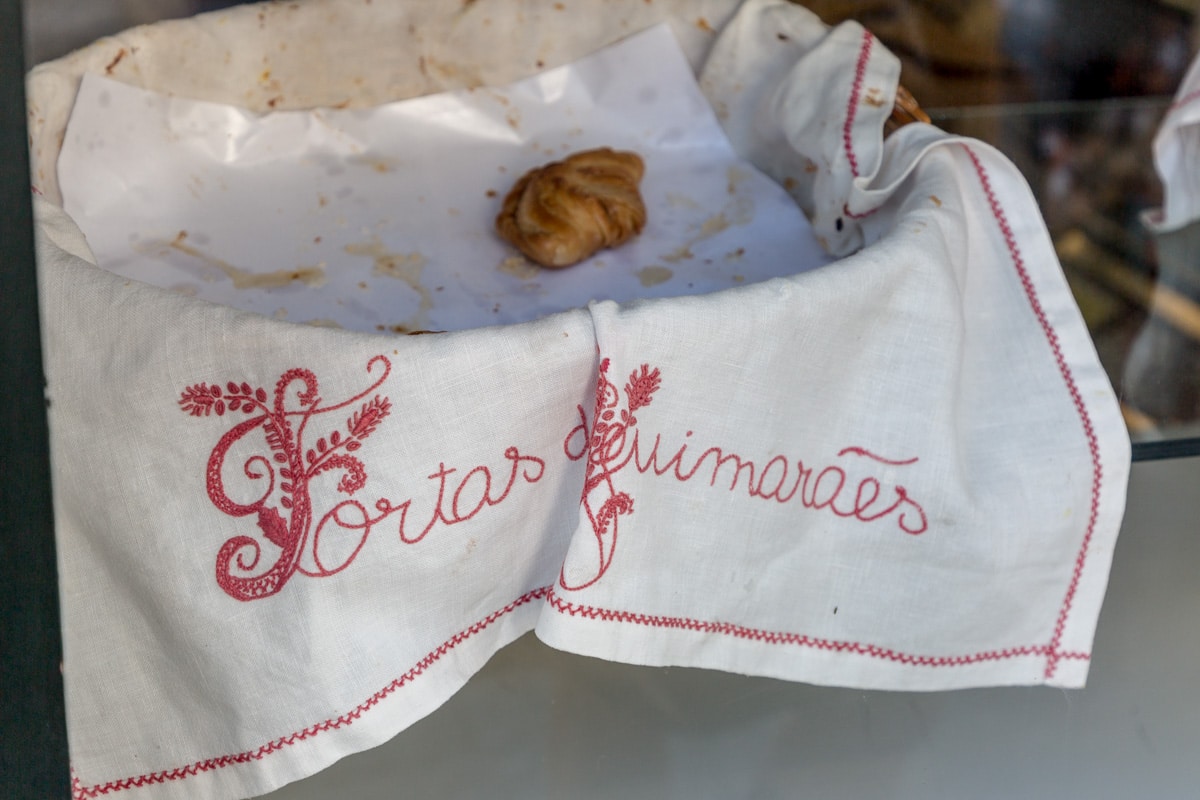 As we left the museum, we asked where to get a Tortas de Guimaraes. The traditional, crescent-shaped pastries, invented in Guimarães, and were originally prepared by nuns from the convent of Santa Clara. They consist of thin, flaky dough filled with a sweet combination of sugar, egg yolks, ground almonds, and chila squash. 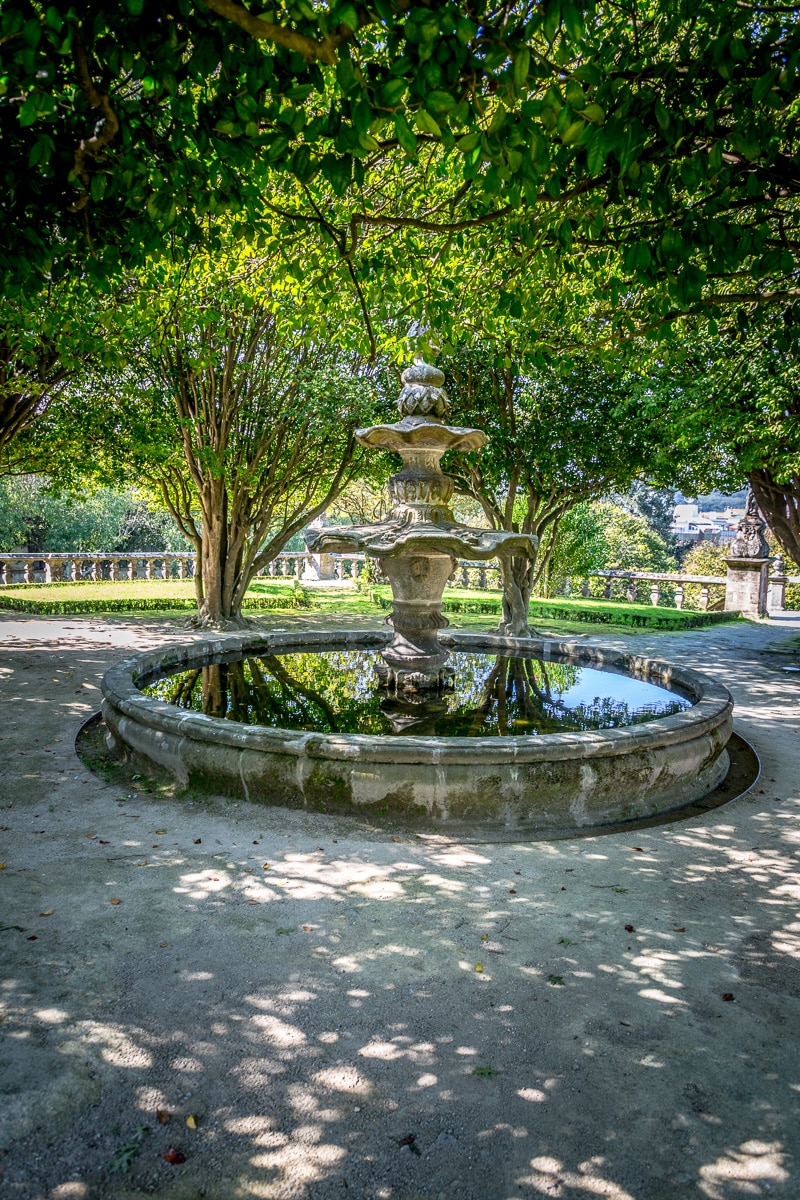 The corner café just a few steps down from the museum was recommended so off we went. Sitting under the large umbrellas, we ordered our pastries, coffee, and some cold water as we watched people coming and going.

By now we were tired. So we slowly made our way toward the train station, stopping briefly at the formal gardens at the city hall. We were still a little early for the 17h15 train but enjoyed another cold drink out of the sun at a table in the station.

The train arrived on time; we arrived in Porto on time, with just enough energy to eat a light dinner before turning in to dream of ancient kingdoms, castles, and giant boulders on mountaintops.