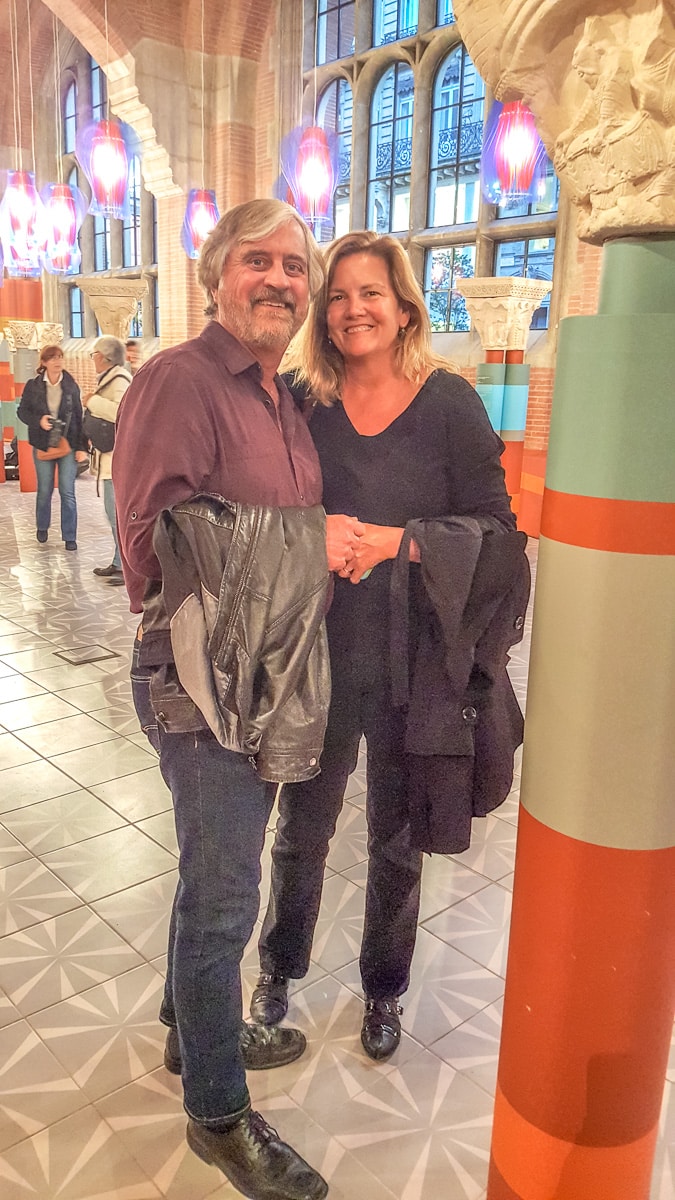 Serendipity does and will strike again … someday, somewhere.

It’s wonderful how good people can pop back into your life and you pick up right where you left off. It was in late 2014 when we met Kate & David in Montpellier. We had promised that we would get together again, and over time we had kept loosely in touch. In fact, Kate visited us in Lyon in 2015. But when it turned out that they would be in Montpellier while we were in Toulouse this year, they kindly decided to drive the 250km (155mi) for a visit since they had never been to this city.

After checking into their lodgings, they came to our apartment for a drink of bubbly, and then it was simply talk, talk, talk. We wandered about Toulouse, along the river and through some of the old town, and then later had a delightful dinner at Le Genty Magret where the conversation flowed even more freely than the wine. 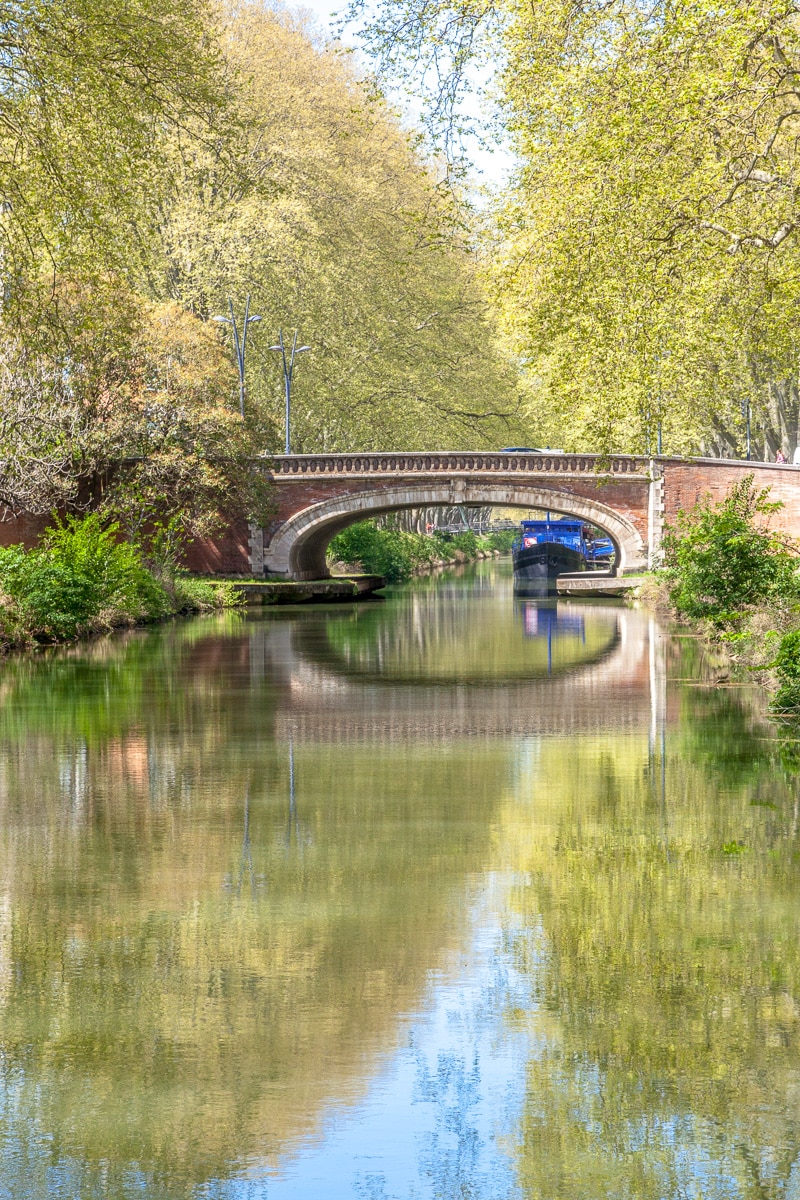 We met the next morning and picked up the tour and conversation again. We stopped by our local market for ingredients for a picnic, and then later spread a blanket along the Brienne canal to enjoy our lunch. Further into the evening, after a pizza dinner, we visited one of the local museums. It was “European Night of Museums”, and all museums were free and open until very late. Nearly 3,300 museums participate in the event in about 40 European countries! So we took advantage to stroll through the nearby Musée des Augustins.

By then it was getting late and after a day-and-a-half of walking, sightseeing, talking, and eating, we were all tired. We said our good-byes as they would be getting on the road early the next morning, but of course we promised to get together again … someday, somewhere.

And yet, stories of friends certainly doesn’t end there … 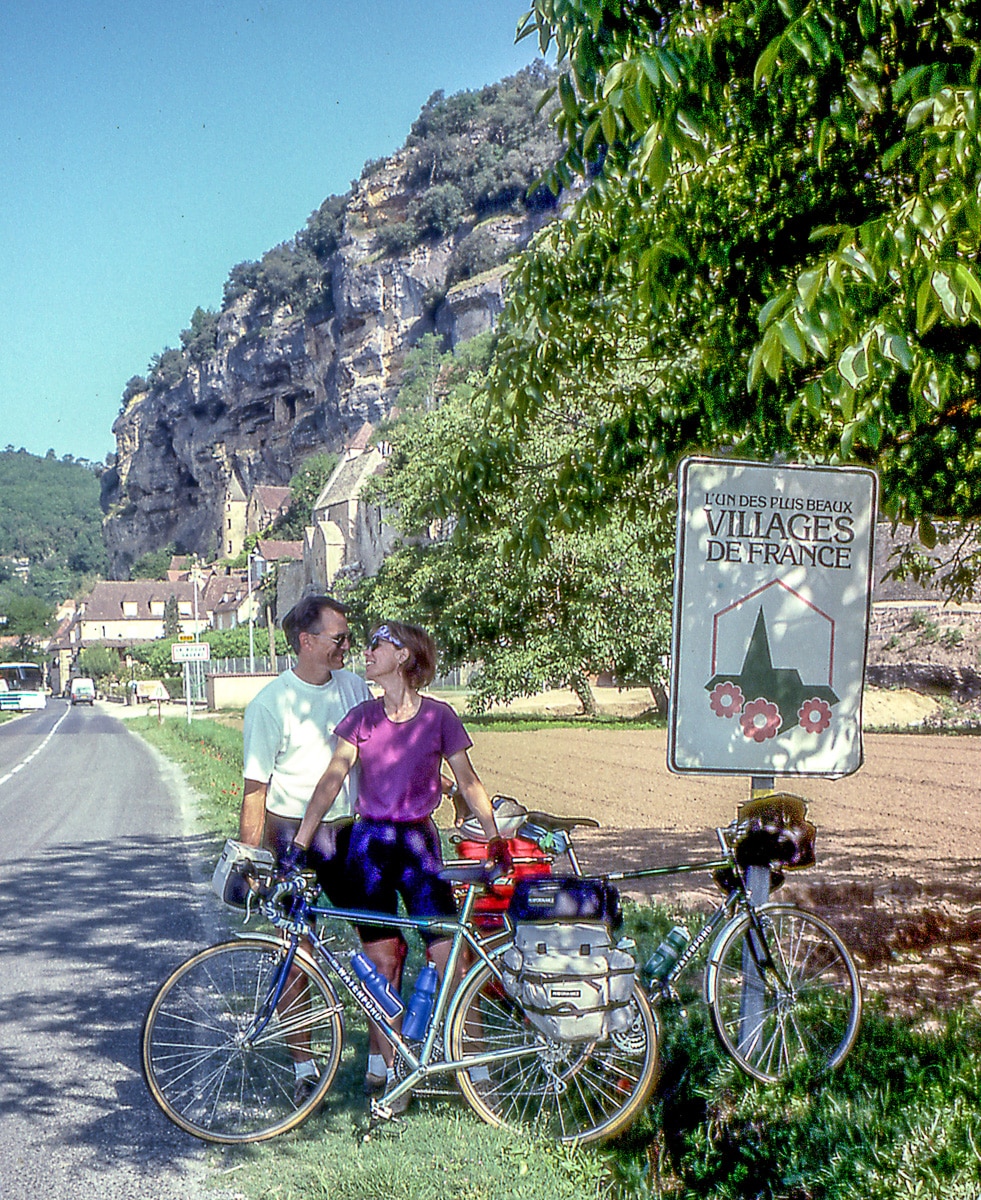 It was in May twenty years ago when we traveled to France to bicycle the Dordogne and Lot River valleys with our friends, Brian and Nicole. It was quite an adventure as we each carried all of our own gear on the bikes, and through very hilly terrain that was quite different from Florida. So it was only fitting that, at some point during our stay in this region, we should return to some of the places that had initially seduced us with their charm. Among the many towns and villages we visited was Sarlat. 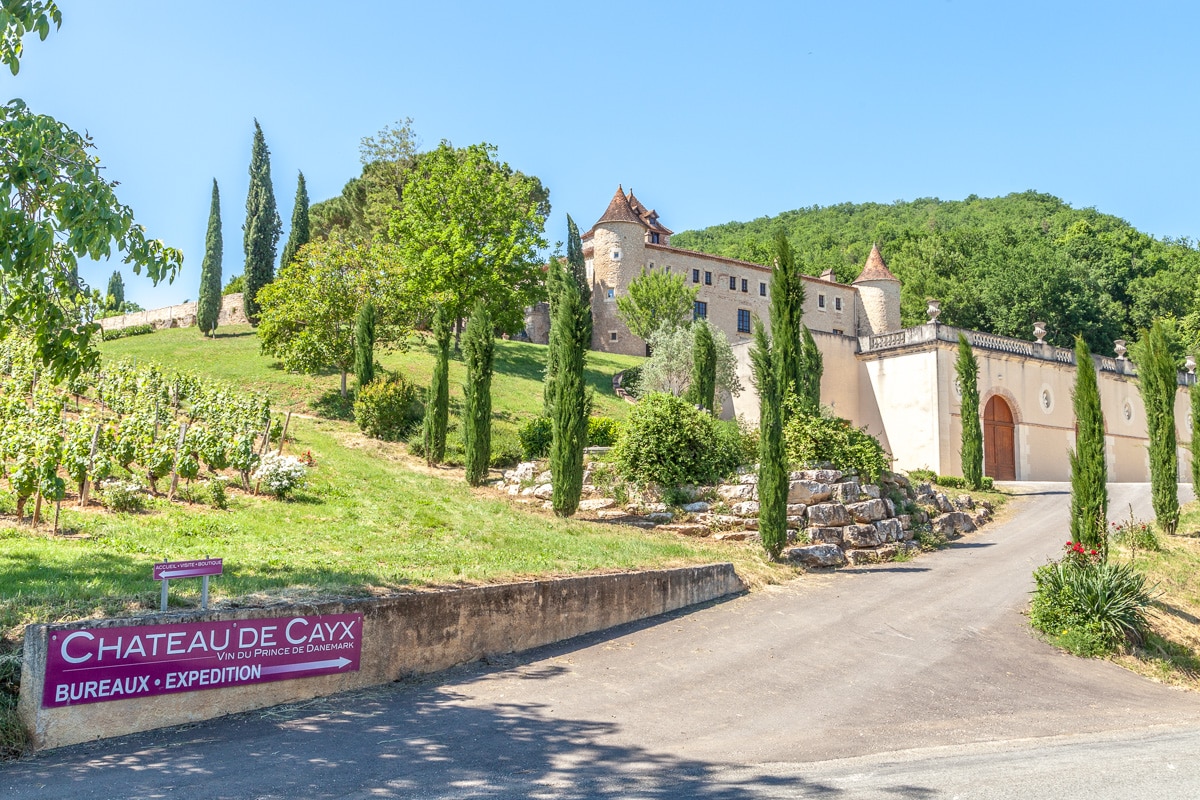 As it turned out, our Danish friends Niels and Jette, were driving to visit Toulouse and us. They had planned to go first to Cahors to visit the nearby Château de Cayx, a winery owned by Henrik, Prince Consort of Denmark who is of French origin, and then to Sarlat for a couple of nights before heading to Toulouse.

At the same time, other friends from Florida  Pat and Gary were on a Rick Steves tour and would be in Sarlat at the same time for a couple of days. AND, some Canadian friends, Sharon and Fae, two charming friends we had met on a tour in China in 2013, would also be in Sarlat after having completed walking over 300km on the Camino de Santiago.

This was serendipity of epic proportions, and somehow it all came together. 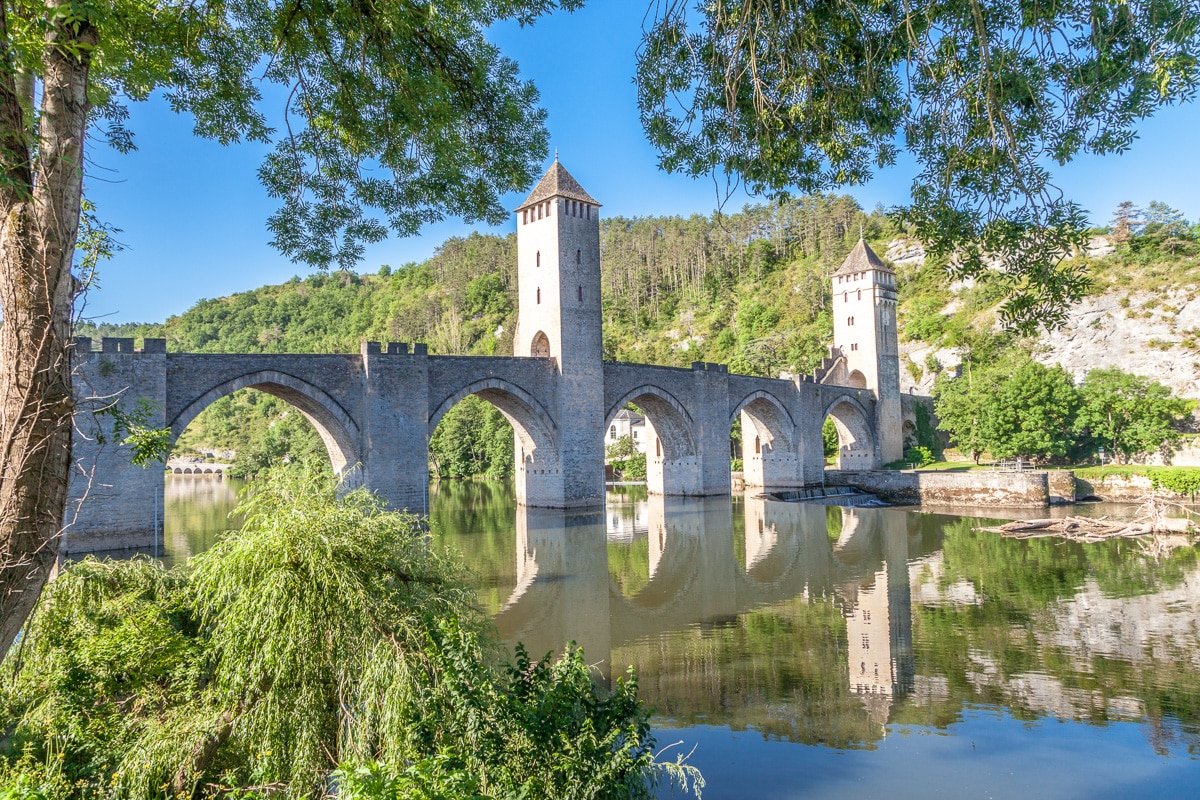 Before we had begun making any plans, we had been checking the routes and options to Sarlat, but there were no direct trains and renting a car would mean that Niels and Jetta would be in a separate vehicle from us later on the return from Sarlat back to Toulouse.

But there was a morning train that could take us to Cahors, where later in the afternoon Niels and Jette would arrive from Lyon. That plan worked out and we met in Cahors, got in their car and all went to the Château de Cayx near Luzech – another cycling memory. Then we rode together to Sarlat along some of the 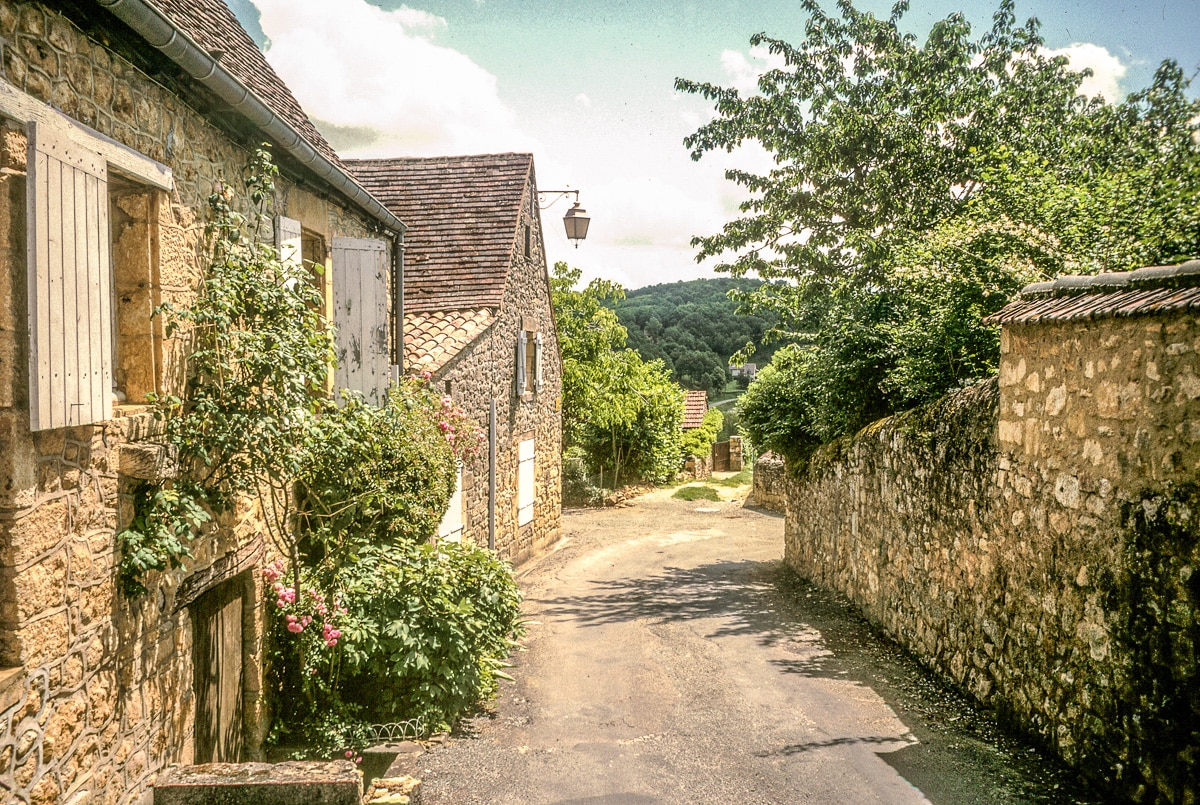 same roads and through some of the same villages that we had cycled through 20 years before. It was much more comfortable to ride up some of the steep roads in a car than it was to pedal up, but back then we were much younger and stronger.

Looking back was somewhat bittersweet however, as some of the small quiet villages we remembered were now rather crowded with cars and tourists. The village of Domme was one such place, and I was saddened to see it being “loved to death”. Yet the views from high above the Dordogne River valley were every bit as beautiful as they were so many years before. 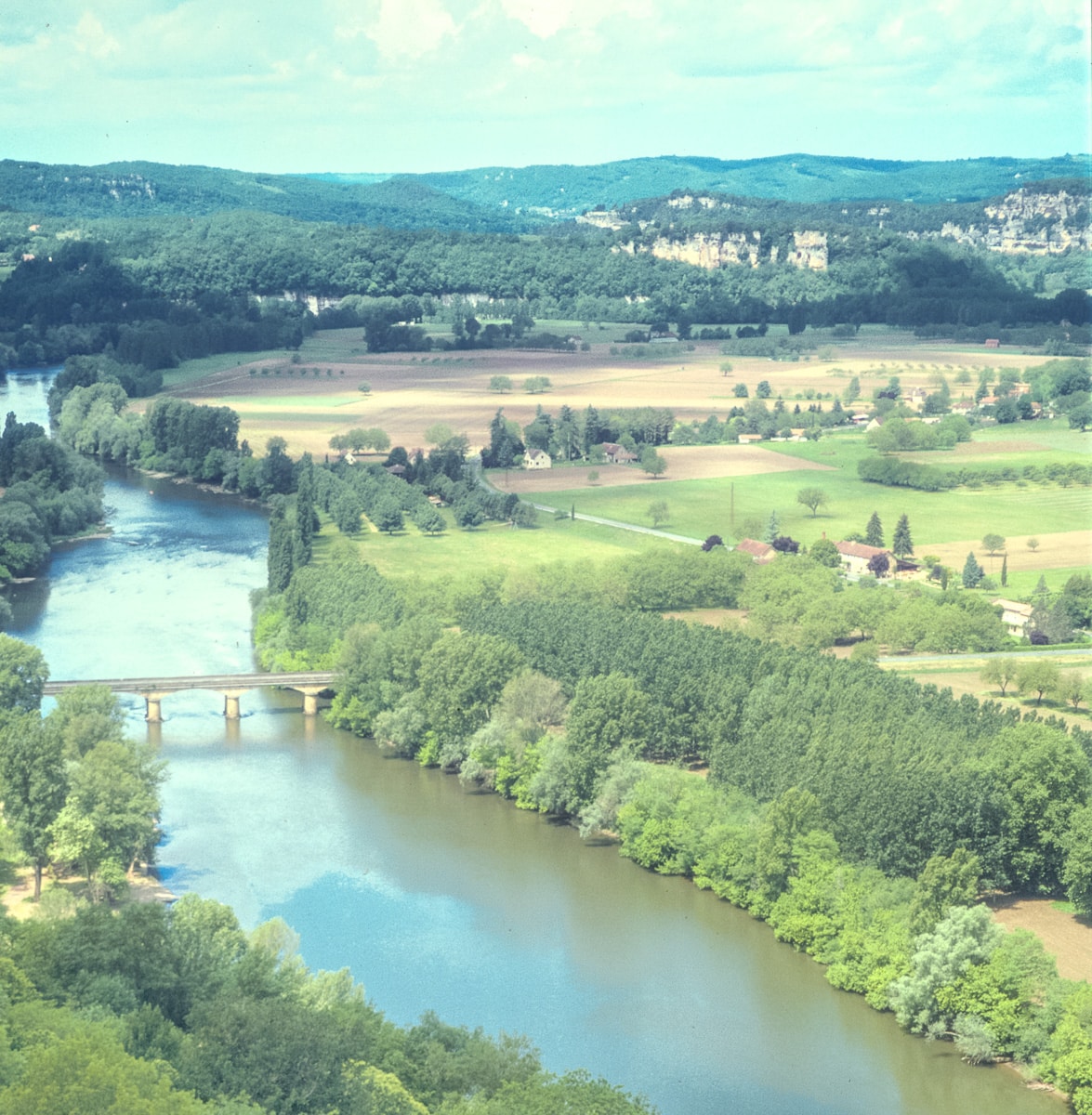 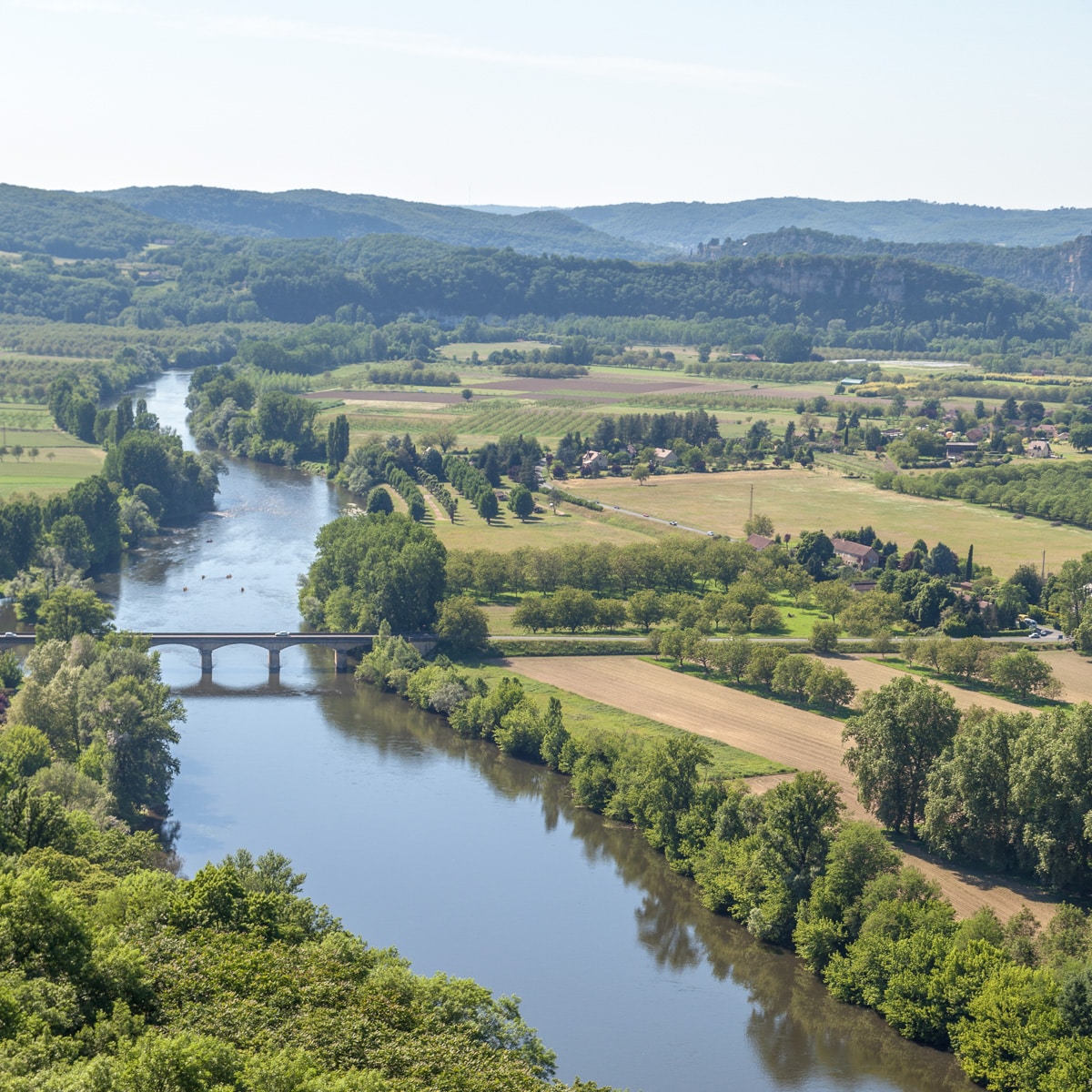 As we drove on into Sarlat, we were excited that six of us, Gary and Pat, and Niels and Jette, would be having dinner together. So Niels and Jette dropped us off near our hotel with our backpacks, and we checked in as they drove the short distance to their lodgings.

Our hotel, La Villa des Consuls, was right in the heart of the medieval city, and we hurriedly unpacked so we could explore some of the town before meeting the others at 19h30.

We had made brief contact with Sharon and Fae by e-mail when they were still in Spain, but sketchy communications issues made getting together with them questionable. E-mail is not instantaneous, and a couple of messages had taken almost 20 minutes to arrive. So we were circling the area where we had last agreed to meet when we saw two smiling faces and arms in the air waving! 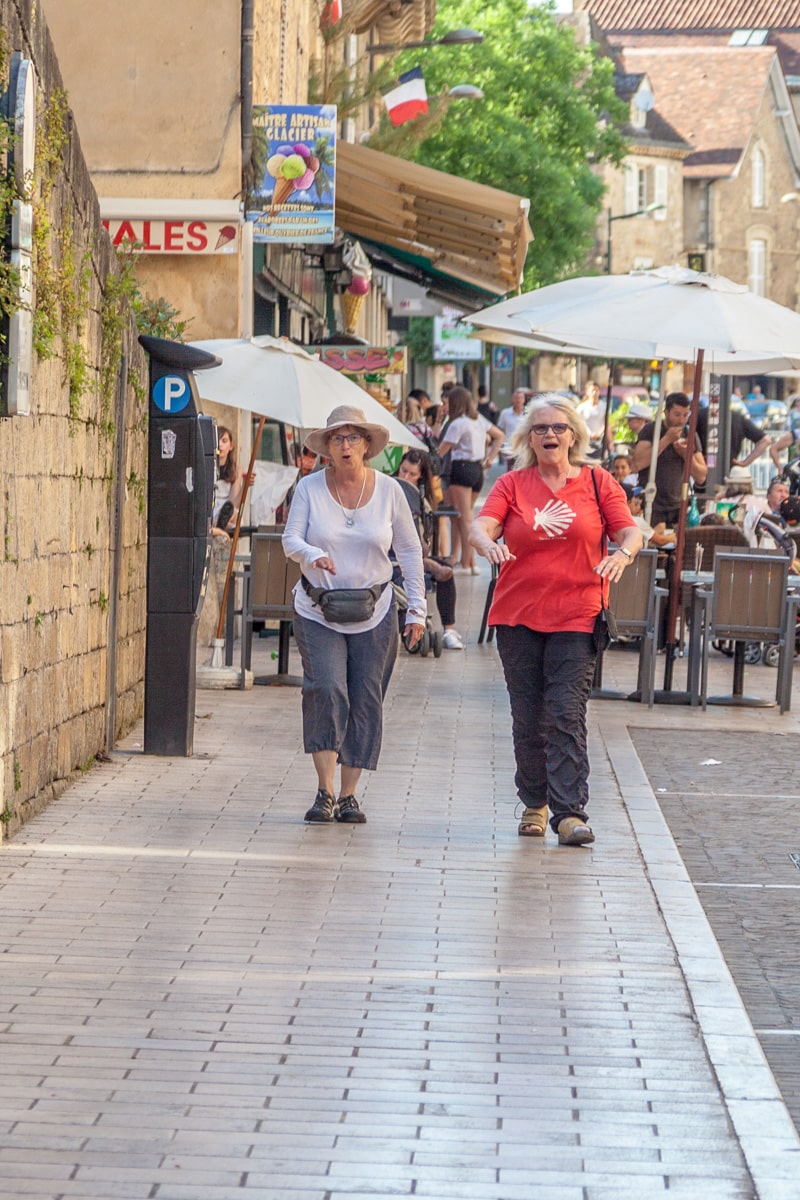 Our visit would necessarily be short, but we had time to sit at a local cafe to share a cold bottle of rosé wine, and the conversation flowed as well.

It was exciting to hear of their hiking the Camino de Santiago and the comradery of the pilgrims as they travel the same routes taken by others since the beginning of the 9th century (year 814). We marveled at stories of Sharon’s persistence in spite of very significant blisters, and one day’s finish 25 km of mountains, sand beach, and hot walking through magnificent country side. They finished over 300km (190mi) in over 2-weeks. Two delightful women with many adventures to share, but regretfully the afternoon wore on and we all had to go our separate ways, departing with promises to meet again … someday, somewhere. 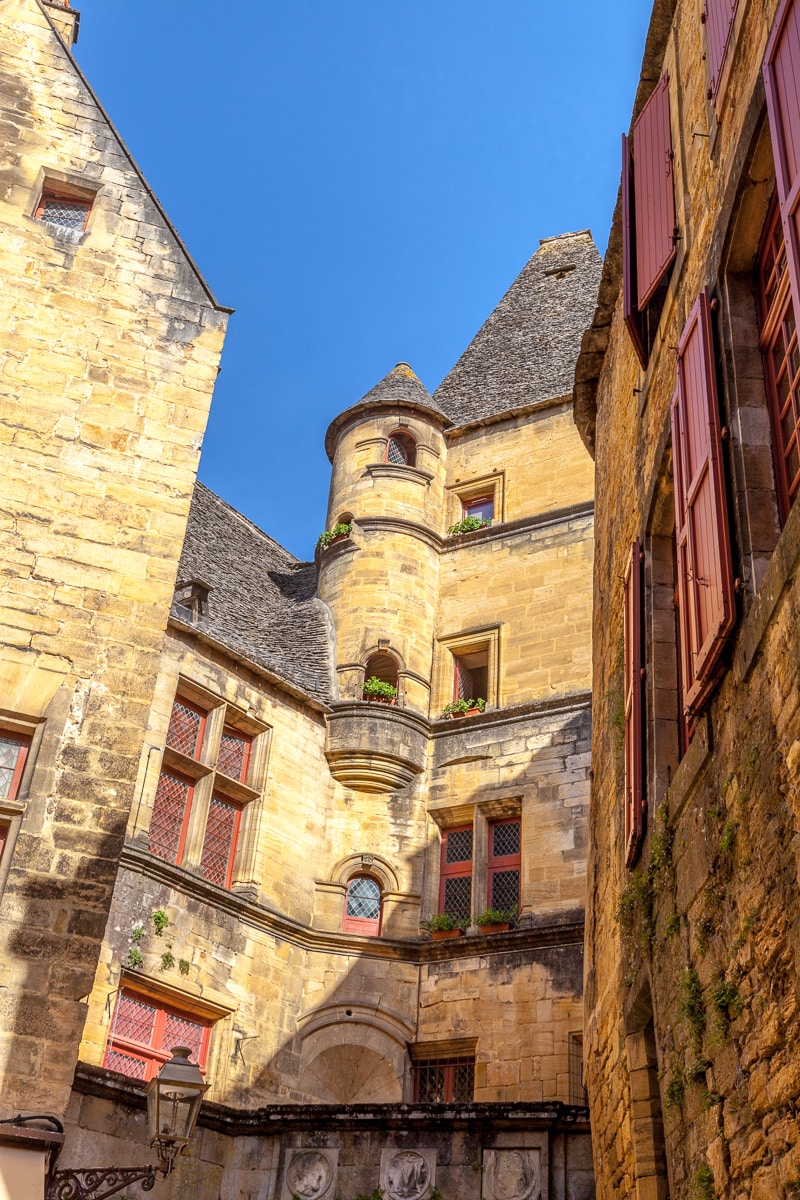 Having a bit more time before dinner, Jeannie and I recalled memories from long ago as we wandered, and yet we also discovered many new places that were unobserved the first time we were here.

Later we met Niels and Jette and Gary and Pat in front of the Restaurant le Régent and had a wonderful meal out on the terrace, enjoying the beautiful clear sky and comfortable temperatures. 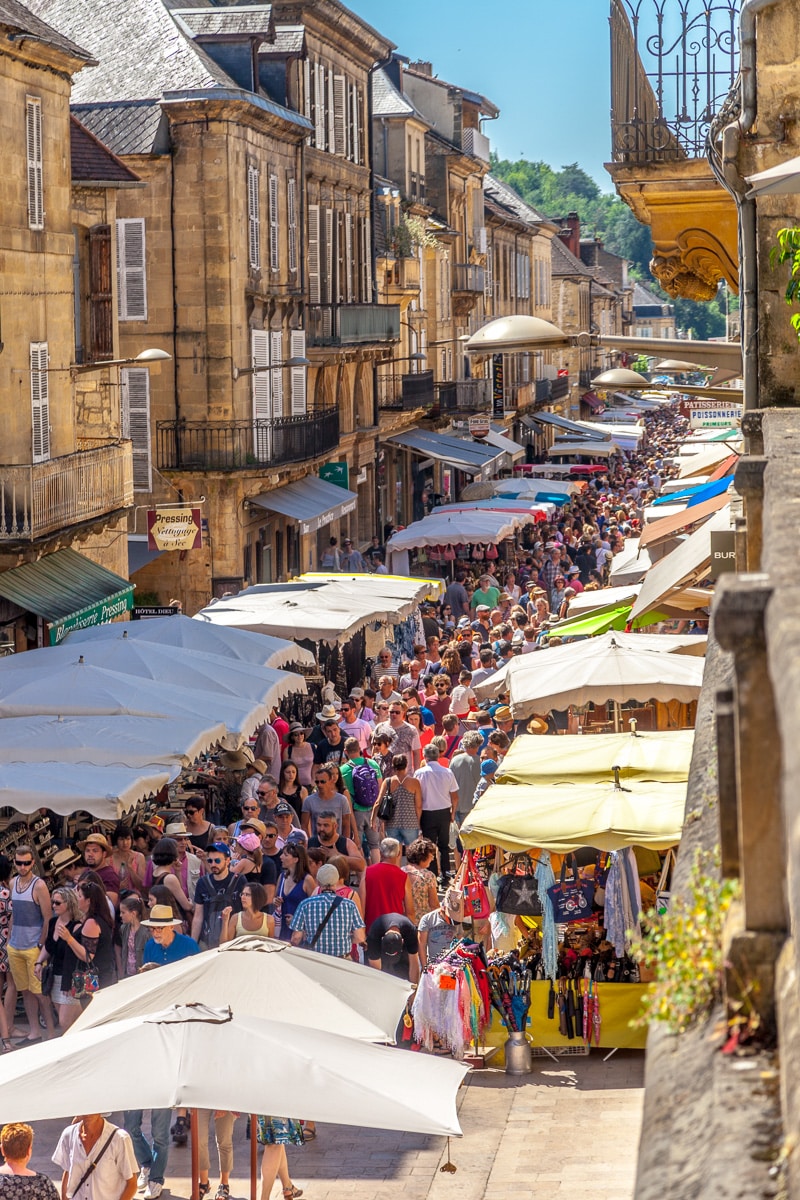 The next day was not only market day, but was also a national holiday so the streets were filled with even more vendors, locals and tourists than normal. The constricted walking areas were filled with people shoulder-to-shoulder and it was generally impossible to stop much less reverse direction. But we and Niels and Jette were able to pick up a variety of foods and a bottle of rosé for a picnic on the terrace of our hotel, happy to be out of the crowds.

That evening the six of us met again for dinner at a different restaurant, Le Présidial, and dined in the beautiful garden of a 16th century, former royal court. Afterwards, we bid Gary and Pat “bon voyage’ as they would be departing early the next morning for Carcassonne 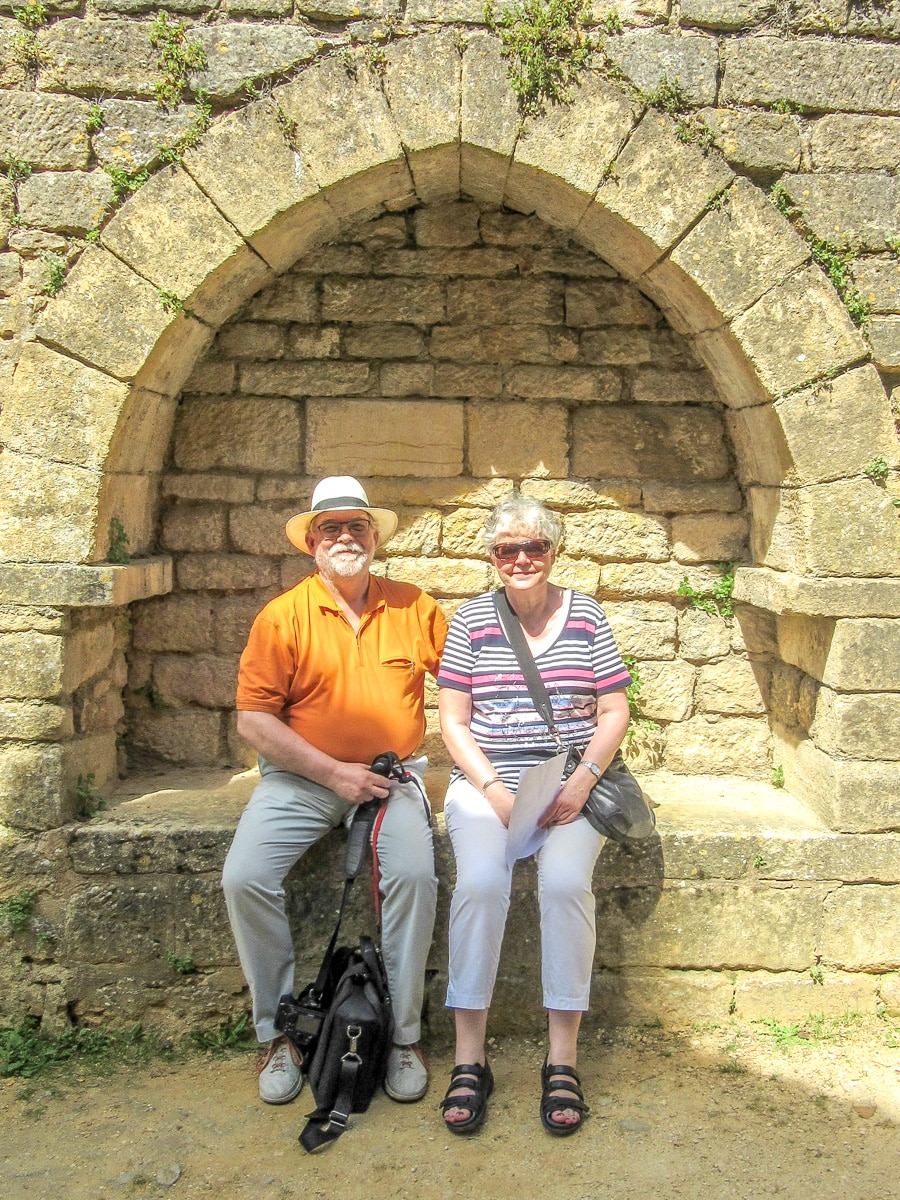 with their tour, we and Niels and Jette would be driving to Toulouse.

We had a few fun days in Toulouse with our friends visiting some of the highlights together, having drinks at Place Wilson, dinner one night at a crêperie on Place Saint-Georges, and a wonderful dinner the following evening at our favorite restaurant in Toulouse La Popote. Their last day in Toulouse, the weather turned chilly and damp. The rain held off long enough to go shopping at the Victor Hugo market where we got ingredients to prepare a delicious dinner in our apartment. After the meal we once again said bon voyage to our dear Danish friends, and of course with promises to meet again … someday, somewhere.