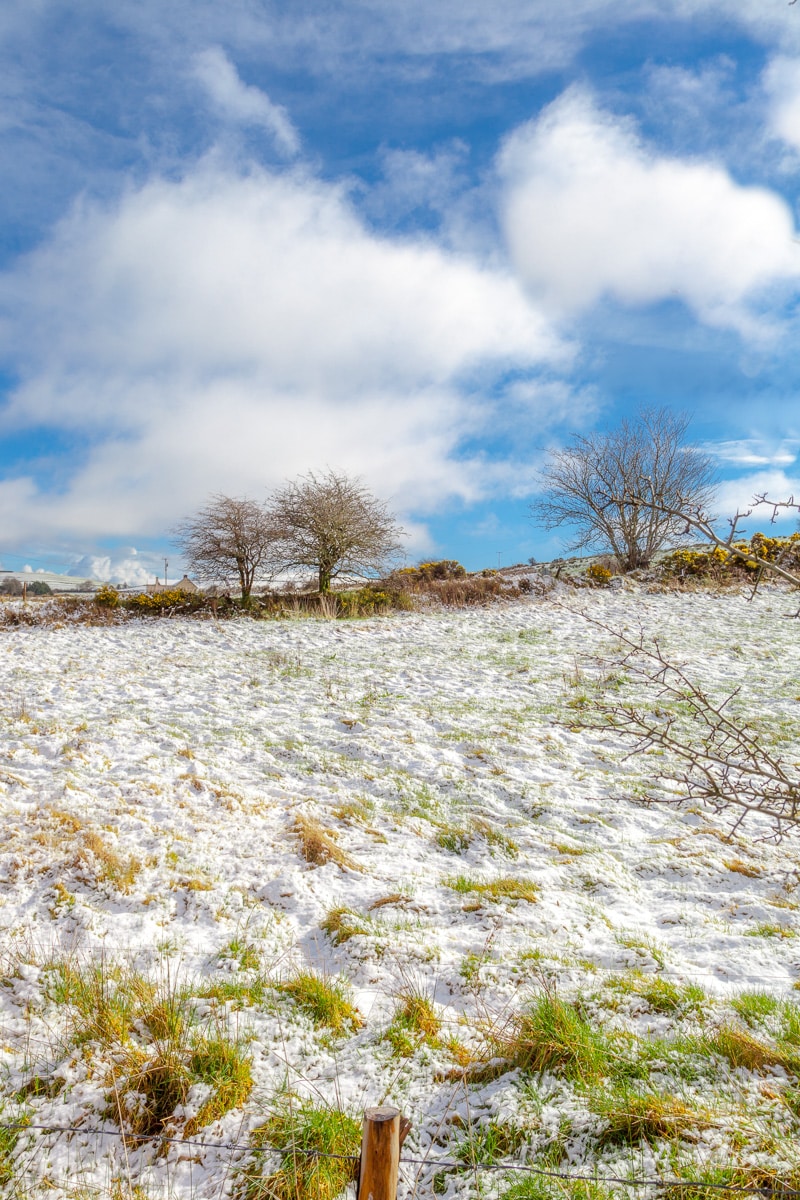 The morning was quite cold as we loaded the car and prepared to leave Killarney. There had been snow forecast overnight, and while there was none around us the mountains in the distance obviously had a fresh dusting on the tops.

The roads were practically empty as we made our way through the countryside and onto the more major roadways. Before too long we noticed that the large hills in front of us appeared to have been covered with a liberal layer of snow, and the closer we got, the fields, rooftops and cars were also sporting thick white tops. 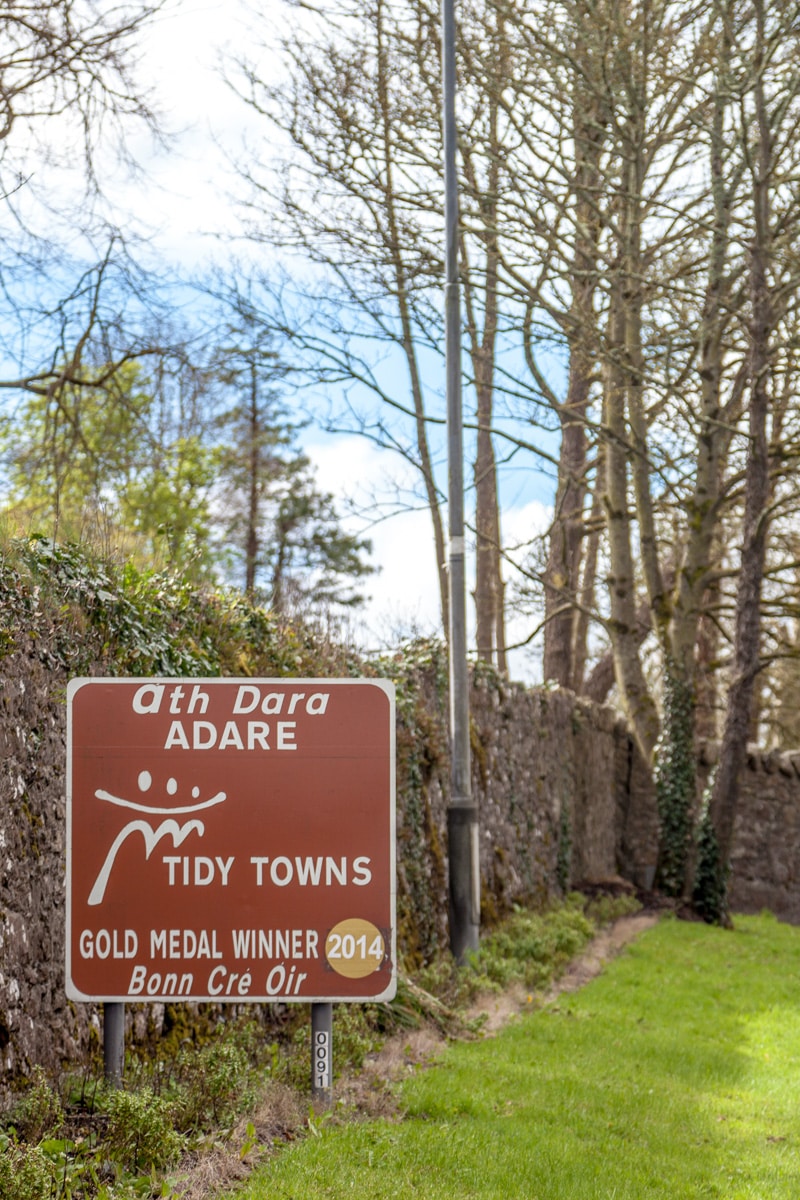 It was still partly cloudy as we approached Adare where we decided to stop on the way to Doolin. Situated on a strategic ford on the River Maigue, the Desmond castle was built on the site. It was a market town in the Middle Ages, and boasted three monasteries.

After visiting the tourist information center, we devised a walking route to visit the ruins of the Franciscan Abbey located inside the Adare Manor Golf Club. We passed the Trinitarian Monastery, now the local Catholic parish church and a cluster of old thatched-roof houses, some of which had burned in the past year. 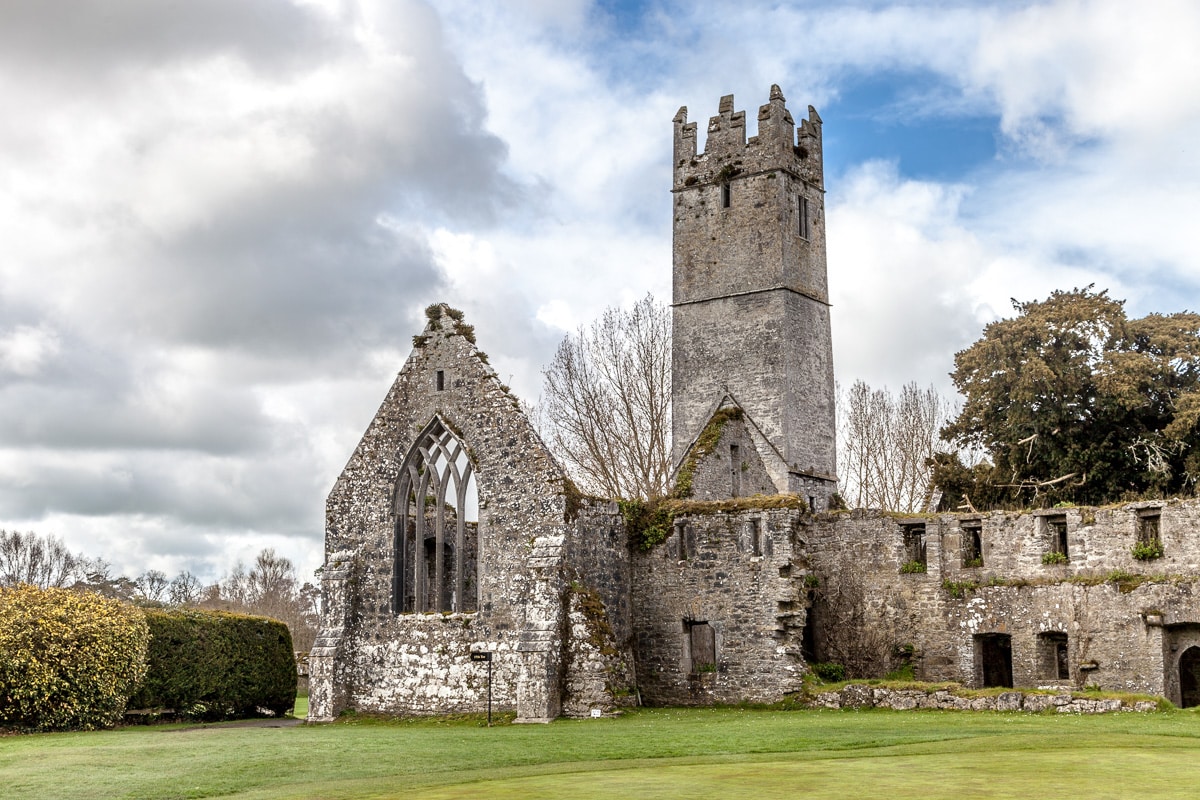 As we entered the golf club, we checked in at the office to ask permission to walk to the abbey ruins. We were appropriately warned that there were quite a numbers of golfers on the links and we were undertaking the walk at our own risk.

Negotiating the fairways and greens, we arrived at the ruins at the 14th green unscathed. On entering the remains, we felt relatively safe from the possibility of errant golf balls, and explored the 15th Century structure. 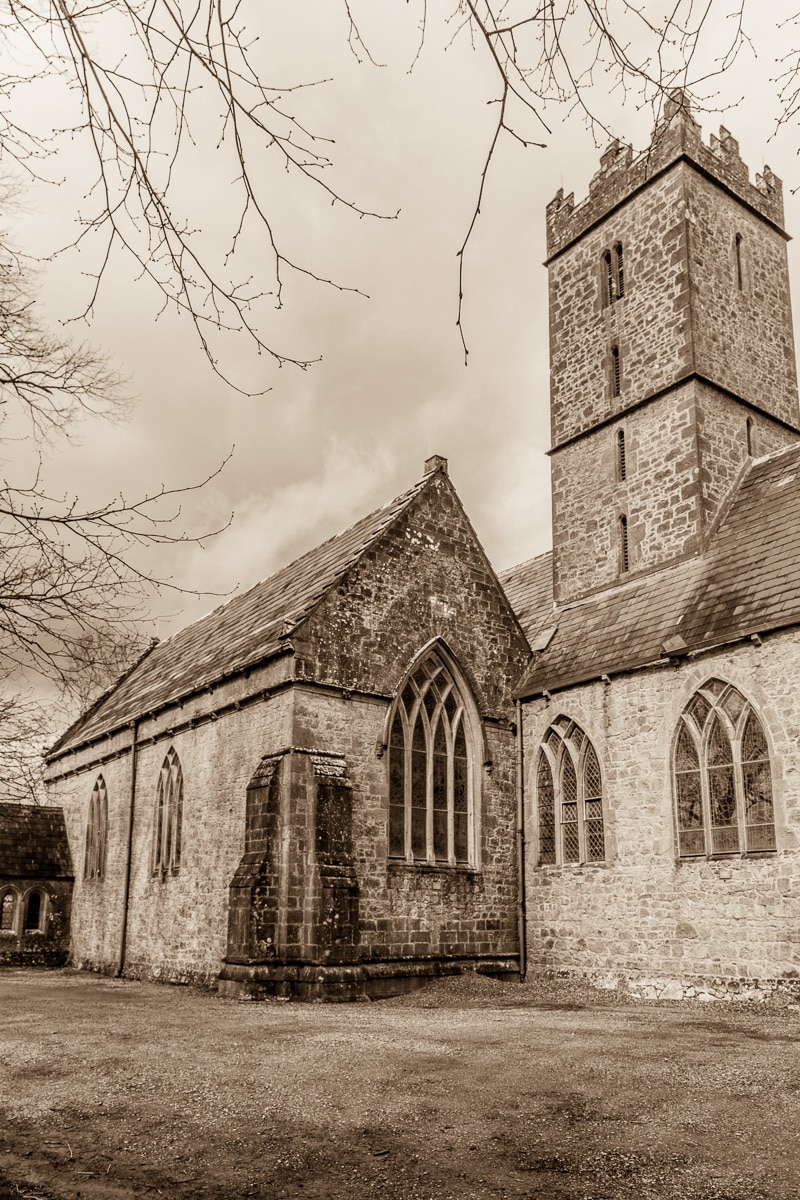 The skies were beginning to thicken, and we returned by way of the third abbey, an Augustinian Priory, that was restored in the early 1800’s as the local Church of Ireland parish church.

Our route back to the car followed the river for a while, but the weather had changed and not far along, the soft raindrops changed to sleet. Fortunately, it didn’t last long, the skies were cleared, and we arrived at the car to resume the drive towards Doolin.

After skirting the city of Limerick, it was now quite sunny. We continued on and entered a small town where we saw the first signs pointing towards the Cliffs of Moher. 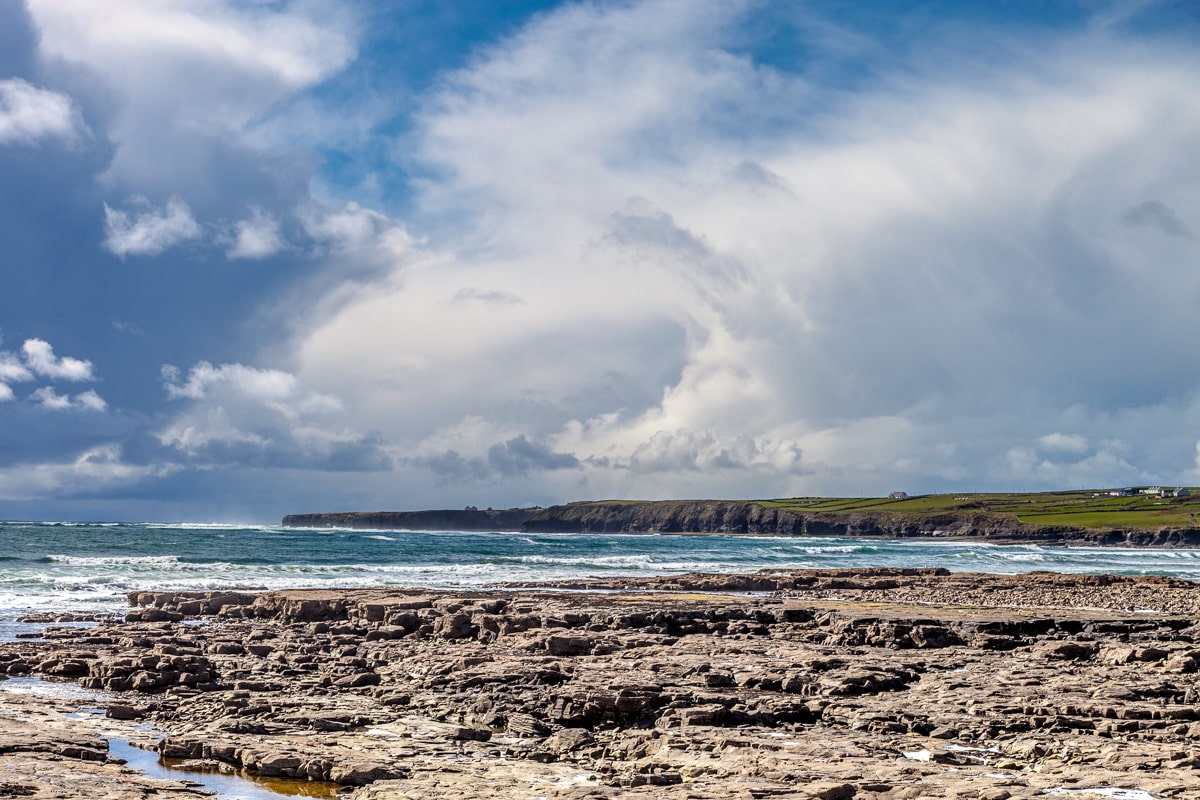 We ignored the turn, thinking that we should carry on to our B&B, then after no more than a mile or so, I pulled off and executed a U-turn and headed back.

Our experience has been to embrace good weather when you can, because it will change, and the light was nice and getting better.

As we reached the coast the sun was brightly shining between the large, white, puffy clouds. The land was gently rolling, but at times along the winding, narrow road, we caught glimpses of the Northern Atlantic, and the cliffs were dramatic. We arrived at the Cliffs of Moher Visitor Center where we parked and joined the crowds making their way to the magnificent view.

The light was almost perfect for capturing images of this place, yet it is so immense it is difficult capture its visual impact. The Cliffs of Moher stretch for five miles along the coast and reach their maximum height of 214m | 702ft just north of O’Brien’s Tower. If you look carefully at some of the images you can see the three story observation tower and people around it at the top of the cliffs.

The cliffs consist mainly of beds of shale and sandstone, and rocks at the base are estimated to be more than 320 million years old. Being almost vertical, their sheer drop into the Atlantic Ocean is a haven for sea birds. Over 40,000 birds live and nest in the rocks, including Atlantic Puffins, Razorbills, Choughs and Common Gulls.

There wasn’t enough time in the day to explore much, I would have loved to have watched the sun descend into the Atlantic, but we needed to get the last 7-8km | 5mi to Doolin. By the time we left the visitors center, the crowds were thinning. The tour buses were gone and the parking lot was almost empty. We had truly made the right decision to come here today.

We reached the Sea View House B&B late in the afternoon, and were warmly welcomed by Darra who showed us to our room and provided a fine suggestion for dinner at McGanns pub, a pleasant walk down the road. After a fine meal, we returned to our room, and prepared to go out later to Gus O’Connors Pub just across the street to listen to some incredible traditional music. But there will be more on that in a future blog; that and a whole lot more.