“One of the great things about travel is that you find out how many good, kind people there are.” ~ Edith Wharton 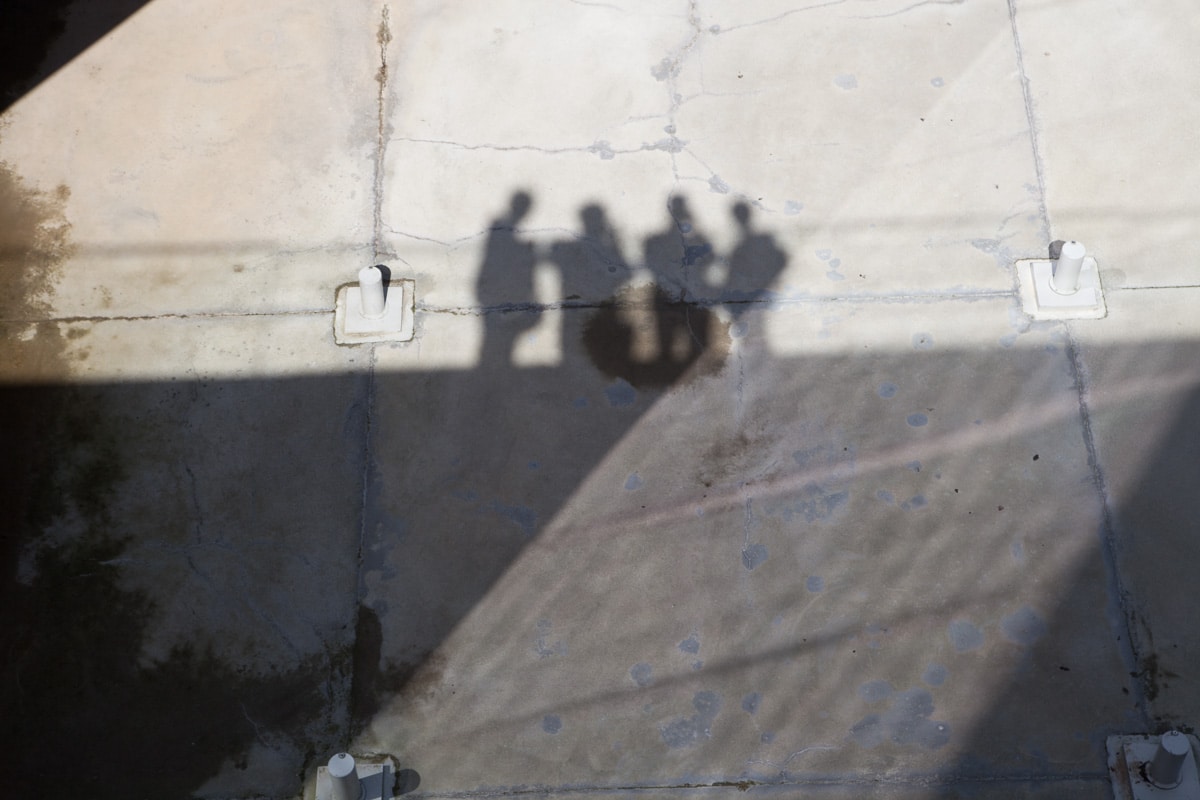 Of all the things we experience as we travel, food, architecture, landscapes or climate, what really impacts our lives are the people we meet along the way.

Now that we are in the fourth year of our nomadic adventure, we realize how much richer we are because of the lives that have touched us along the way. And during our return to France and England this year, we are happy to know that we will see some of those friends once again. 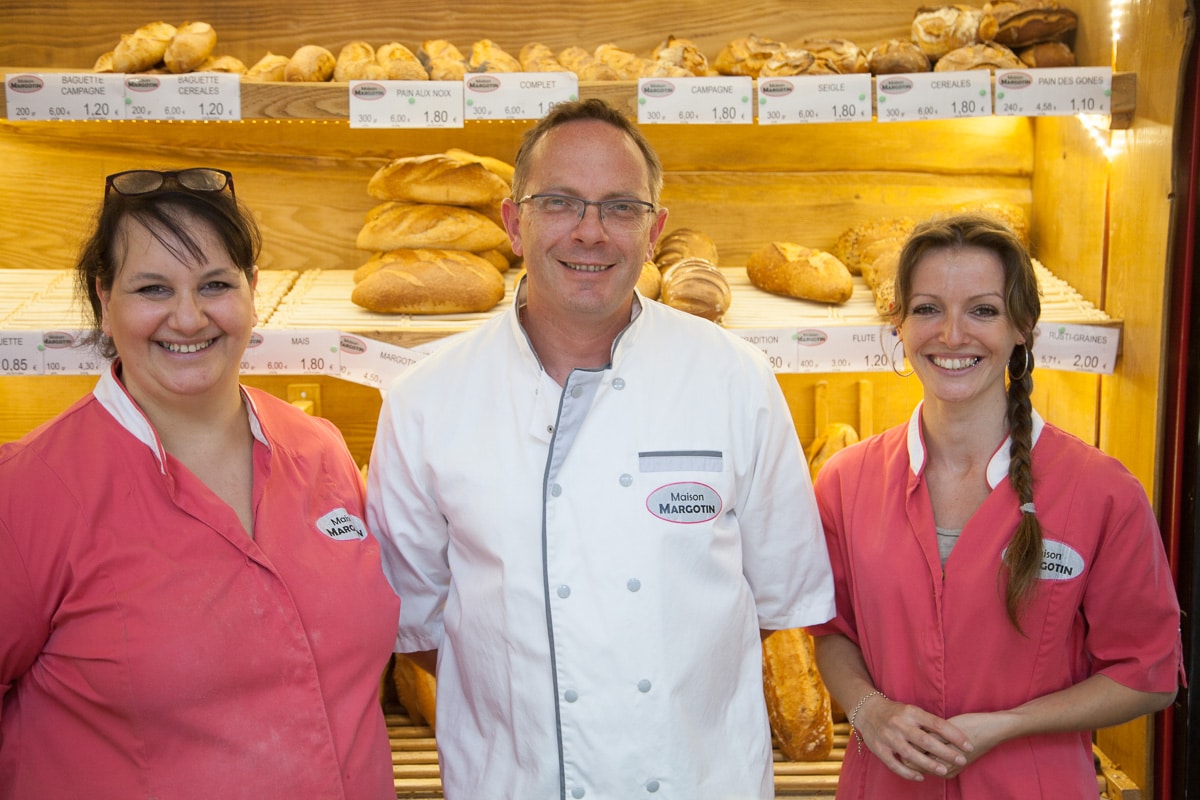 The friendships that one makes while traveling come in many forms. Some are small encounters that result in an exchange of smiles and understanding that may last for just moments, yet will be remembered for far, far longer. Like the young woman who always cheerily welcomed us into the Boulangerie in Montchat, and who, while riding her bicycle saw us strolling down the sidewalk, smiled a big smile, waved and greeted us with a happy “bonjour!”

Some friendships are grand, and the threads that pulled us together will connect us the rest of our lives.

Here are a few images of friends that we have made during our travels over the last few years, though most of the time we don’t get photos – we are too busy talking to think about the camera. Their smiles in the moments of our time together is at the heart of why we continue to travel.

One of our first new friends along the way was the owner of the apartment we booked for our “practice” visit to Montpellier, France in winter 2014. Barbara, originally from California and now living in New Zealand, had a beautiful flat for rent on one of the lovely squares in the city. We spoke to her during the booking process, and after looking at the pictures of the cute French décor, knew that this would be a welcoming environment for our first short stay. We were delighted that one year later we would meet her in person, in Madrid. We have learned to stay in touch and look for opportunities to reconnect with new friends, and it’s always a joy! 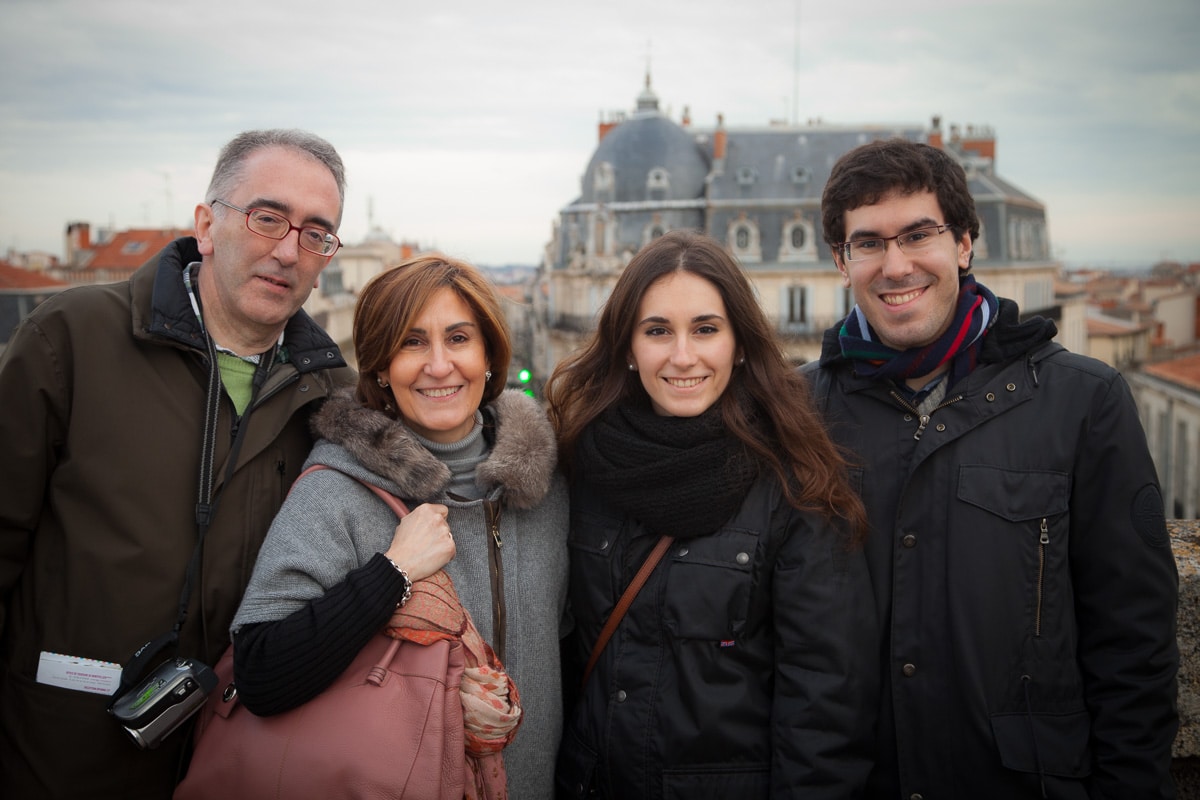 Later, while on a walking food tour in Montpellier, we met a family from Barcelona Spain – Joseph, Montserrat and their grown children. We exchanged emails and one year later after renewed contact, we spent a lovely day with them in Barcelona. Had we remained longer in this delightful city, we would have continued our friendship, and will certainly be in touch even if we don’t return to Barcelona. 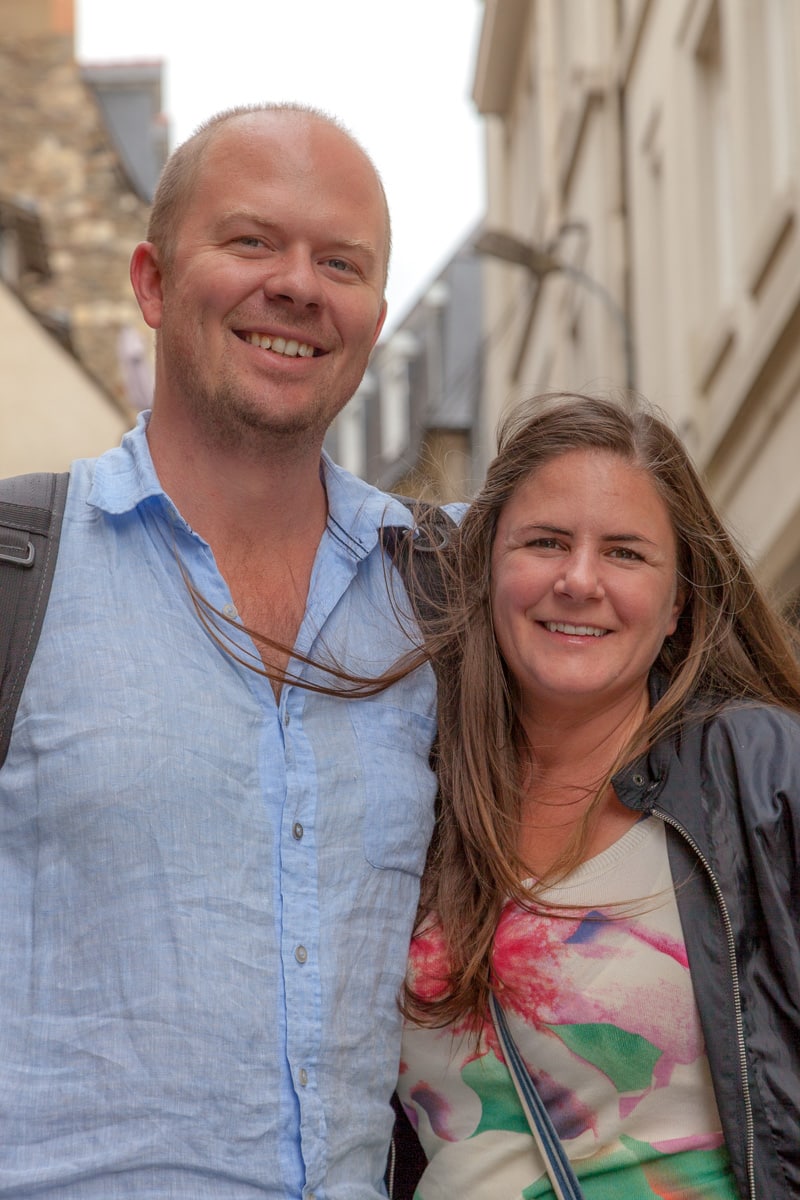 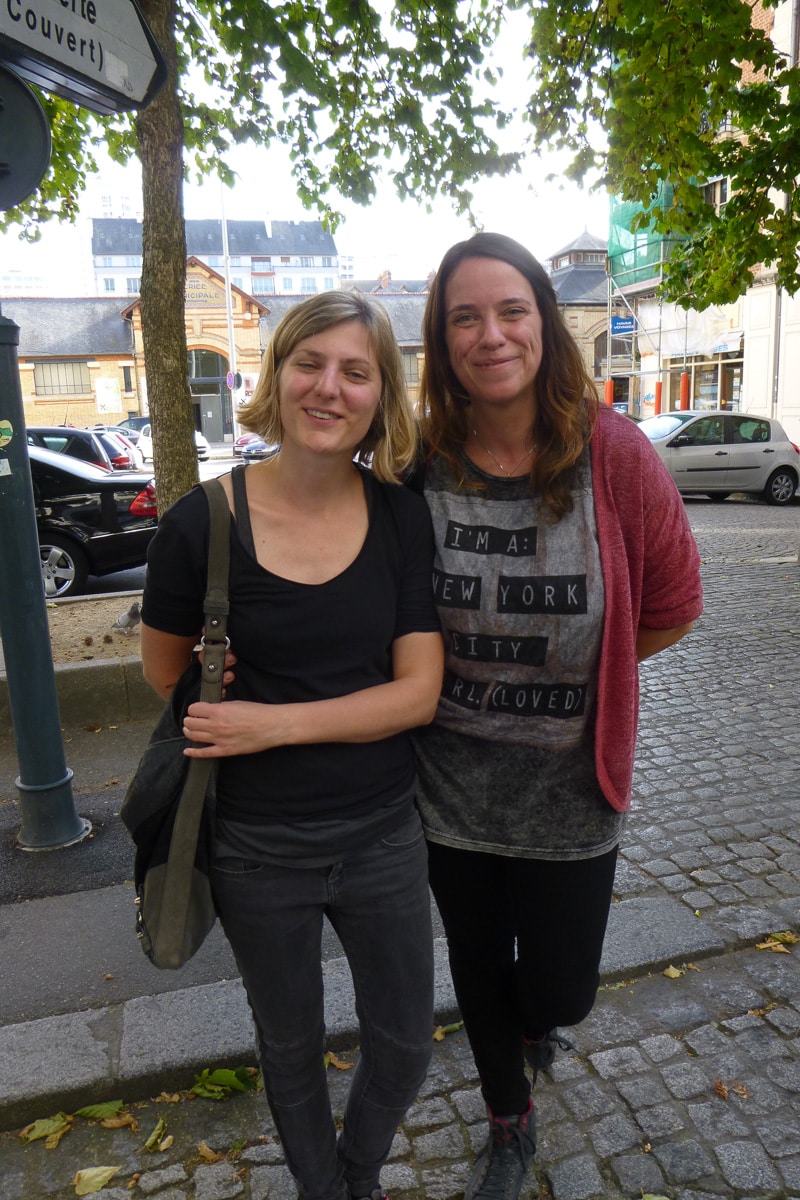 At times our travels reconnected us with friends from the USA, and this was the case with our young friends Bridgit and Matt. We met up with them at an outdoor café in Rennes, France, where they introduced us to several of their local friends, especially Aurélia and Catherine who later invited us to dinner, and recommended other places to explore in their lovely city.  These two lovely ladies helped us arrange a visit to a local Osteopath to help with the mending of Jeannie’s broken wrist. They accompanied her, provided translation assistance, and moral support; what great friends! 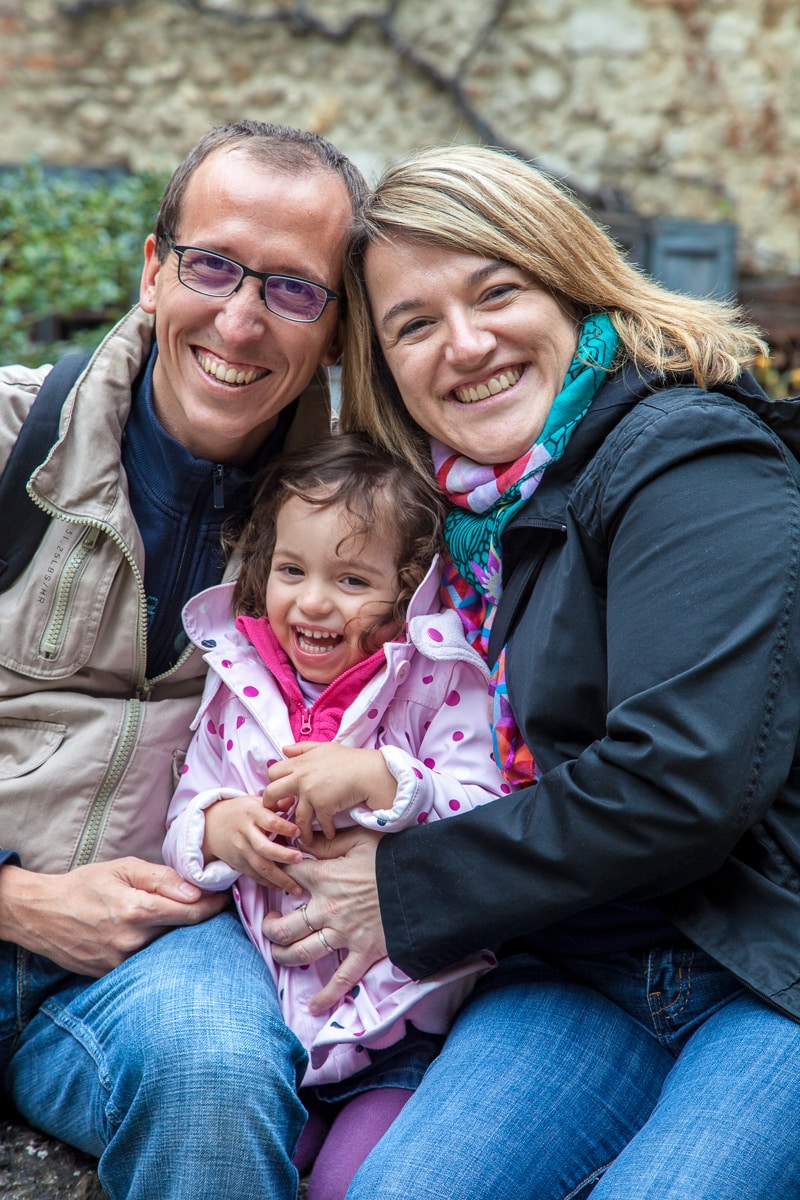 Our French connections continued with a chance encounter at a small café in Saint Malo while we were living in Rennes. We met Nicolas, Lucie and Noemie when he initiated a conversation with us, and Chris’ brother and his wife who were visiting. This chance meeting triggered our decision to spend several weeks in Lyon later that year. 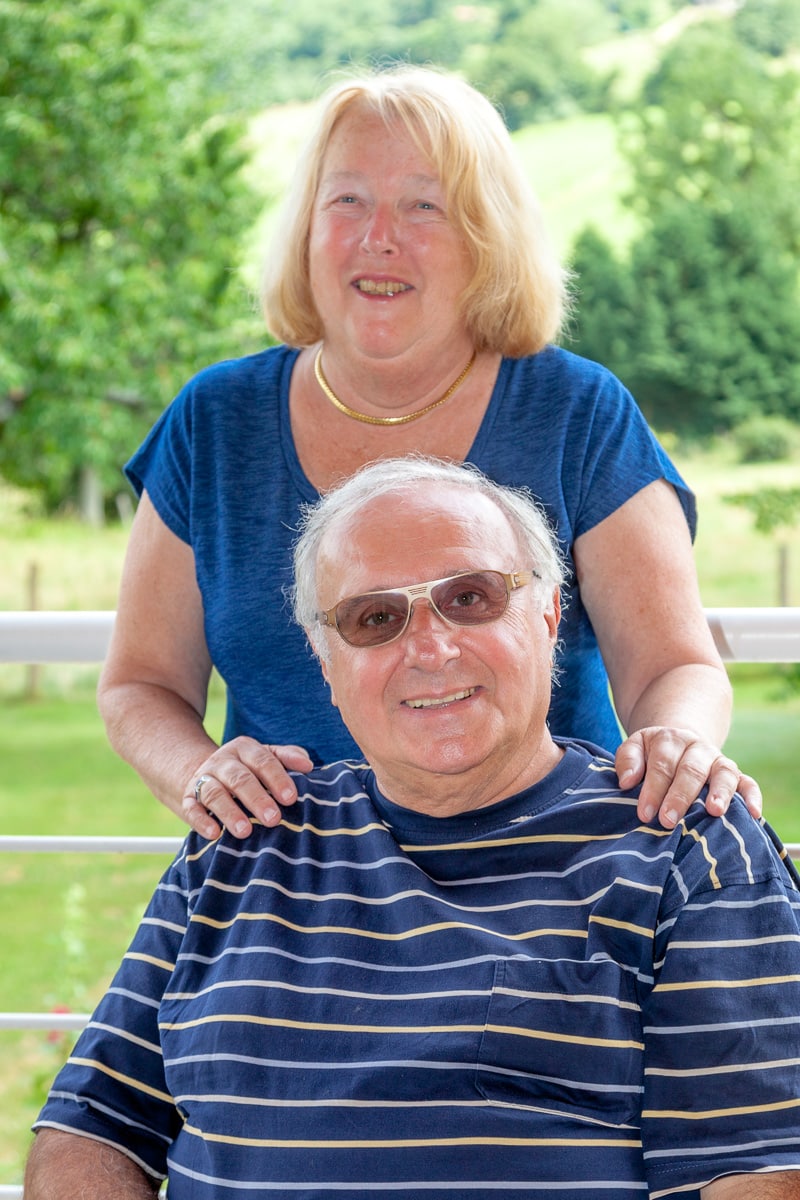 Later, they joined us for the Fête des Lumières on a cold December day and evening, being our personal city guides as our friendship evolved. When we moved to Lyon in April 2015 for three months, they shared their busy lives with us and we became close friends. They welcomed us to their family celebration of their daughter’s 3rd birthday party, where we met their parents, other family members, and friends. Being in Lyon for several months allowed us to meet-up several times in the city, and Lucie’s parents Michel & Francoise, even invited us to their home in the country for a weekend. What a delightful time we had! When it was time to leave Lyon, we promised to stay in touch and look for another opportunity to see each other. While that was not able to happen later in 2015 or 2016, we will  visit them during our time in Toulouse this year. 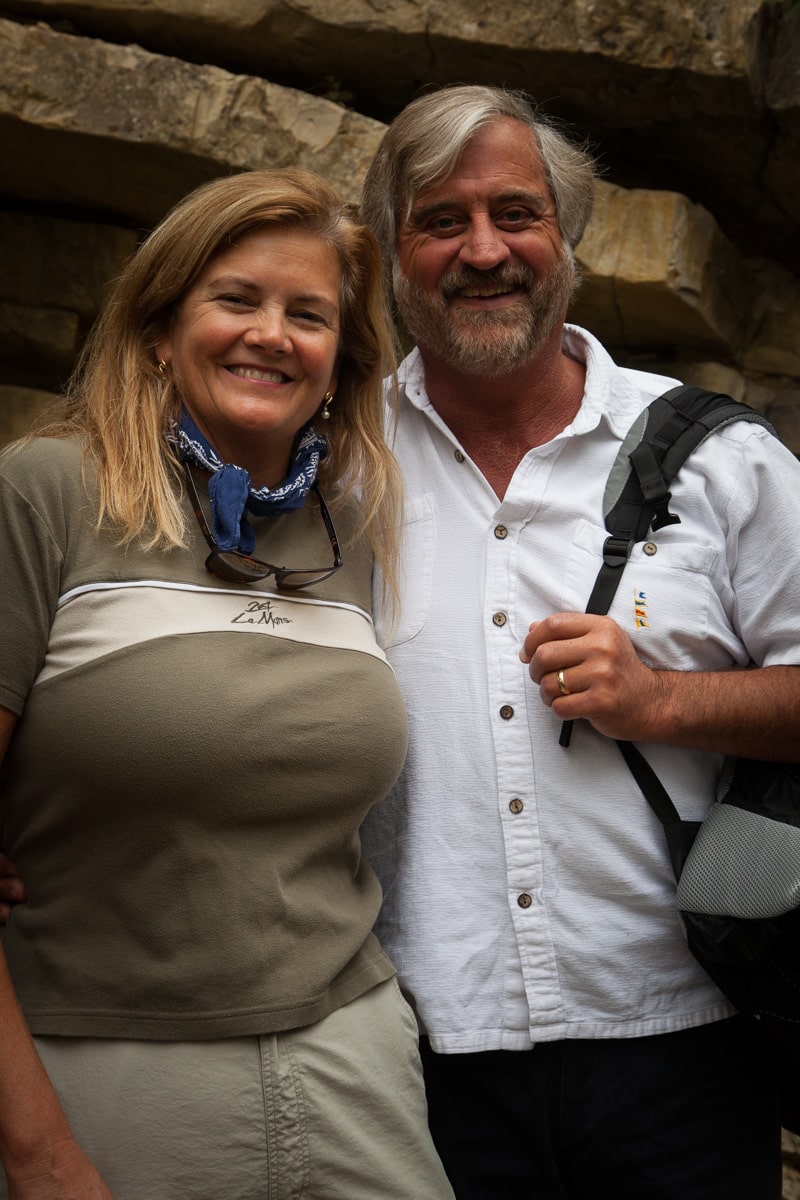 The way we have met people is as varied as the places we travel. In Montpellier during our six-week stay, we frequented the Halles Castellane, the city’s main covered market. At one of the boulangeries we spoke to Sophie who worked behind the counter, attempting to buy baguettes with our limited French. During one exchange where understanding was not completely achieved, we gave her one of our contact cards. Several days later we received an email from Kate and David. Sophie had been trying to ask if we knew the other American couple who often came to the market, so she passed our card on to them and our introduction was complete. We met Kate and David several times while we lived there, including a trip outside the city for a hike. Washington state residents, they had purchased a lovely apartment for their frequent visits to France. The next year, Kate visited us in Lyon and we were able to share a few highlights on her first trip to this city. Our stay in Toulouse this year will overlap with their time in Montpellier, and they are planning to come visit us. 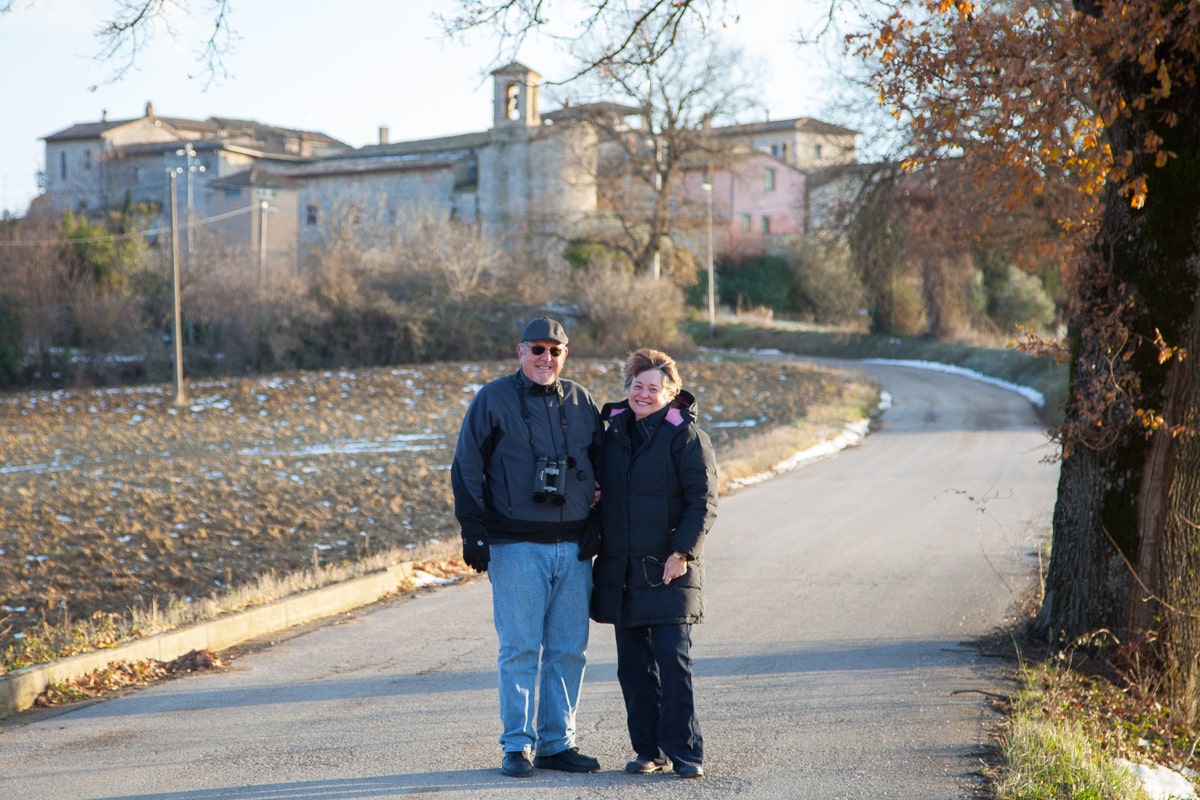 When we left France in late 2014, we went to Italy to visit our Florida friends Jeanie & Herb who own a cottage in Umbria. They introduced us to an American couple, Claudia and Gary, who now live permanently in Italy. The six of us shared a fabulous New Years eve and day, feasting & celebrating life in Italy. Though Jeanie & Herb had to return to Florida, Claudia & Gary helped Jeannie celebrate her birthday at a fabulous restaurant in Cortona.  When we plan another visit to Italy, we will most certainly find an opportunity to see Claudia & Gary again. 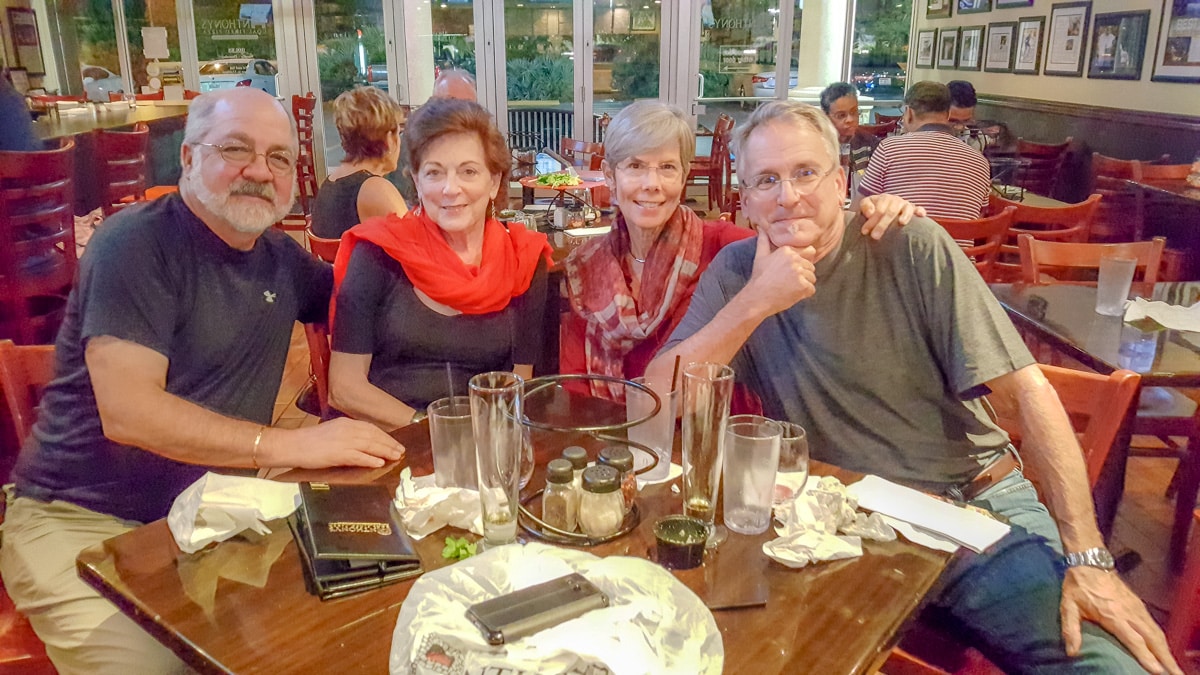 We have made other new friendships with Americans through locals trying to connect travelers within their city. We met Joan & Mel through our apartment manager Benoit. Unfortunately our introduction occurred at the end of their stay in Lyon, where we shared an afternoon beverage at an outdoor café. We weren’t able to meet again in France but did share a day in Florida when they came to Orlando in late 2016. A picnic in the state park, followed by dinner in a local restaurant was a great way to continue this friendship and we hope to see them again, somewhere. 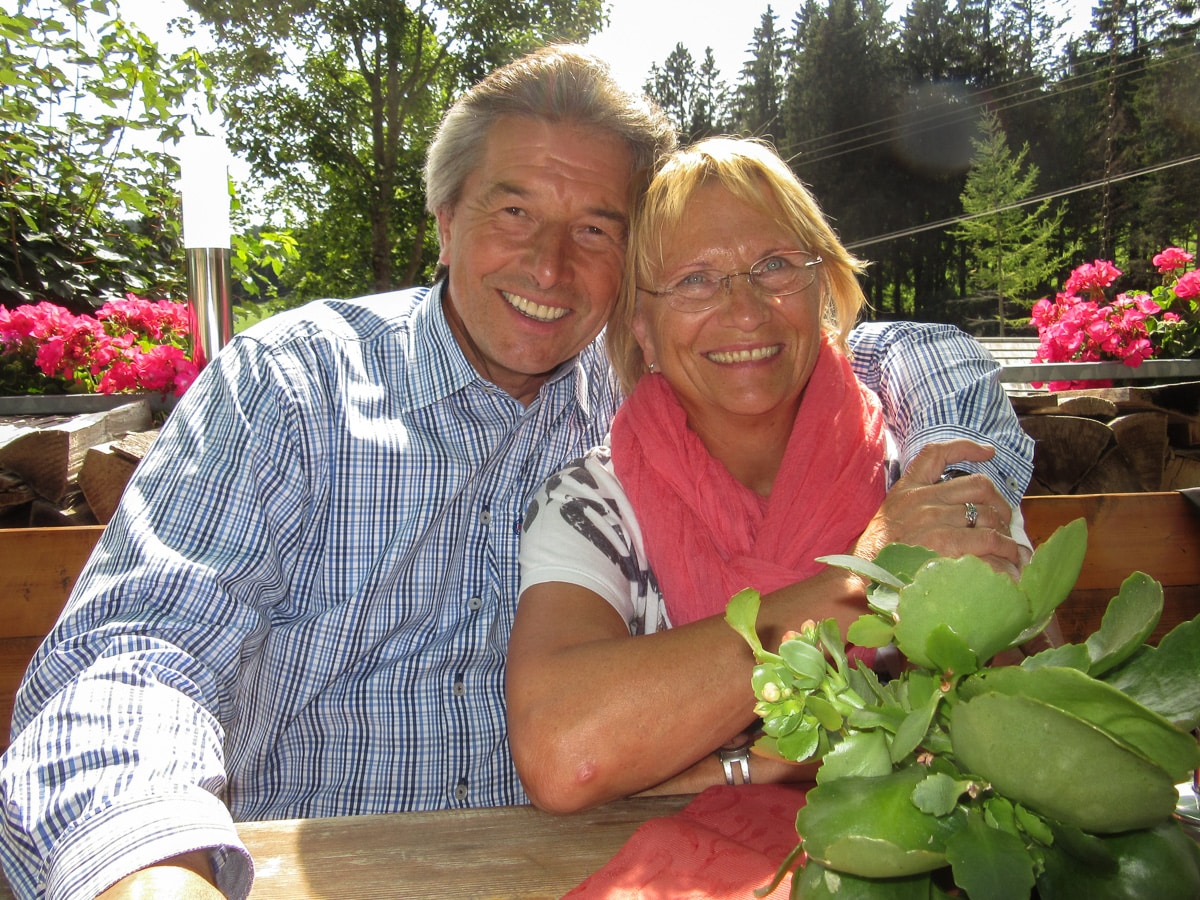 After Lyon, we lived in Strasbourg, and as we realized how close we were to Germany, we began to consider how to take a trip over the border. A friend of mine Linda, has cousins in the Black Forest area so I contacted her to see if we could get an introduction. Soon we had train tickets to meet Karl & Ingrid, and spend a day with them. They arranged a wonderful itinerary, driving us to several of the highlights of the region, which included a slice of the famous Black Forest cake.

We have since stayed in touch, and when they came to Florida to visit Linda late last year, we all spent a great evening together, including a German dinner at Hollerbach’s Willow Tree Café. If we don’t travel again to Germany soon, we hope to see Karl and Ingrid again in the future when they return to Florida. 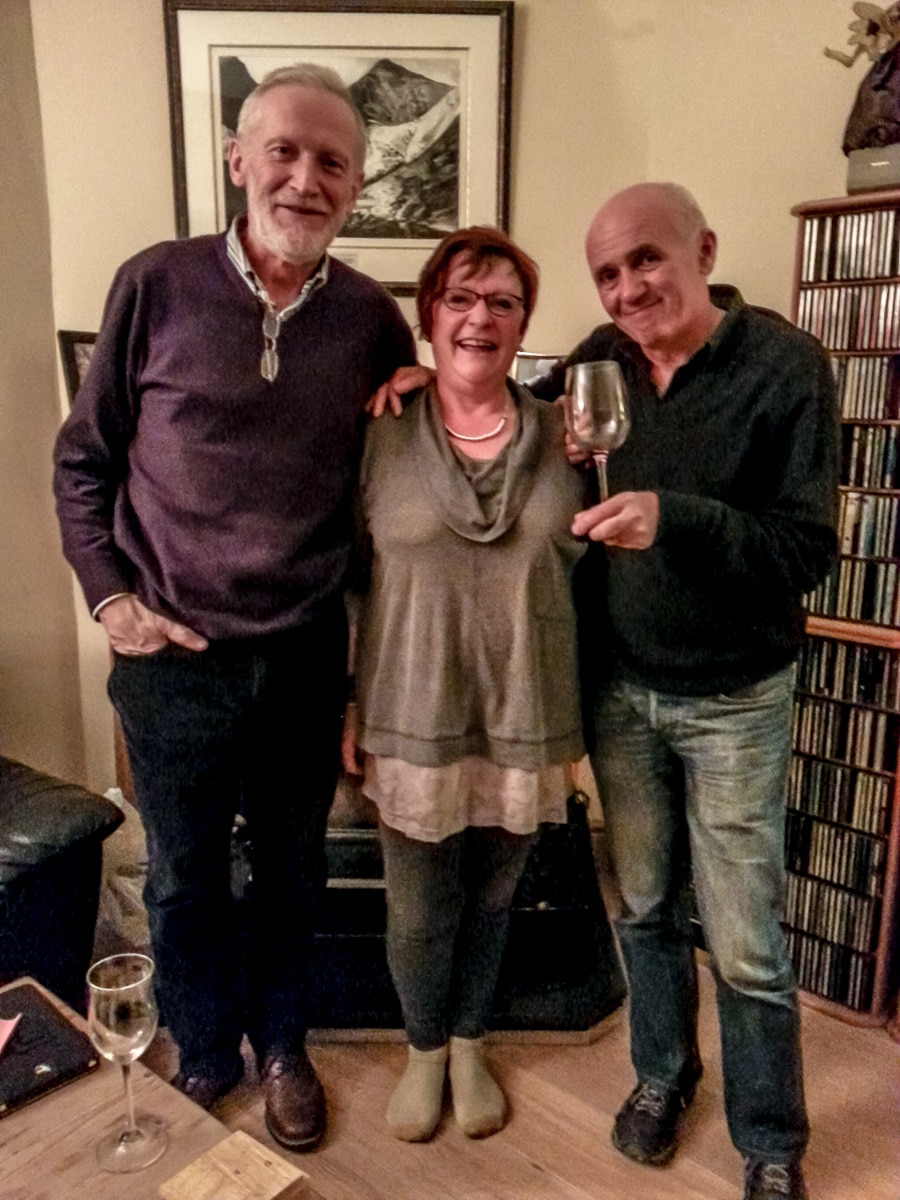 Often a friendship begins from a chance encounter and casual comment, and such was the case with Miriam. On one of our walks through Killarney National Park, we paused at the edge of the woods. Miriam said hello and asked if we had seen the local red deer near the path. From that initial comment, we soon found ourselves invited to dinner at her home. We spent a great evening with Miriam & her husband Mick, and her brother; we sipped wine and enjoyed a delicious pasta dinner, followed by homemade rhubarb pie. This was a wonderful way to celebrate our 42nd anniversary! Just before we left Killarney, we met Miriam for a coffee, and have since connected on FaceBook. We’ve just learned that they will spend several days in Bordeaux during our final weeks in Toulouse, and maybe we’ll have a chance to meet again! 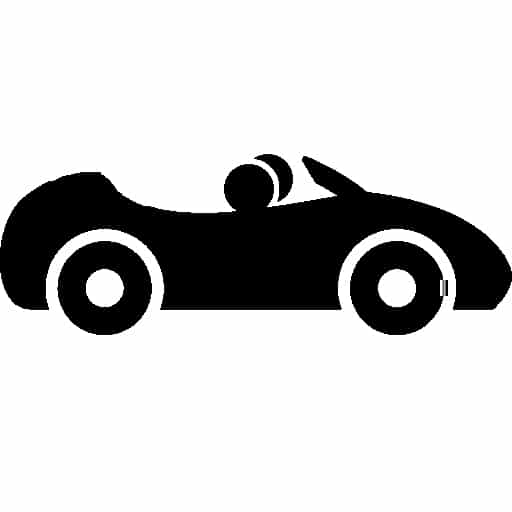 On a sunny day in the village of Downham England, we met Mike & Angela. After a great walk, Chris and I stopped at the local tea shop for ice cream. It was a beautiful warm sunny day, and we were relaxing at a table outside when a convertible with the top down rolled slowly by. We watched their heads turn as they saw us enjoying a cool treat, and they quickly found a parking place and then settled at the table next to us. Of course conversation began, our story shared and we soon had new friends following our blog.  With our plans to return to the UK, we’ve discovered there may be an opportunity to meet up with Mike & Angela later this year, perhaps at another ice cream shop?!

During our month in Bergen Norway, we took a number of fjord trips to enjoy the scenery of this beautiful country. And when you are on a tour, it makes it pretty easy to strike up a conversation with other tourists/travelers. Along the way, we met a French family, Jean Marie, Maria, and their two grown children. We were excited about having additional French friends, however, they are from Reunion Island, a French department in the Indian Ocean. They speak very fluent English, so conversation was easy in spite of our limited rusty French. When we discovered that our apartments were a short walk away, we met several other times to enjoy drinks and conversation. It is not likely that we will travel to Reunion, but we hope to stay in touch and possibly connect if we travel to the same location.

There are so very many other wonderful people we have met along the way, far too many to mention in this blog post. But simply put, our lives are enriched by everyone we have met on this journey, and as William Butler Yeats once said, “There are no strangers here; Only friends you haven’t yet met.”