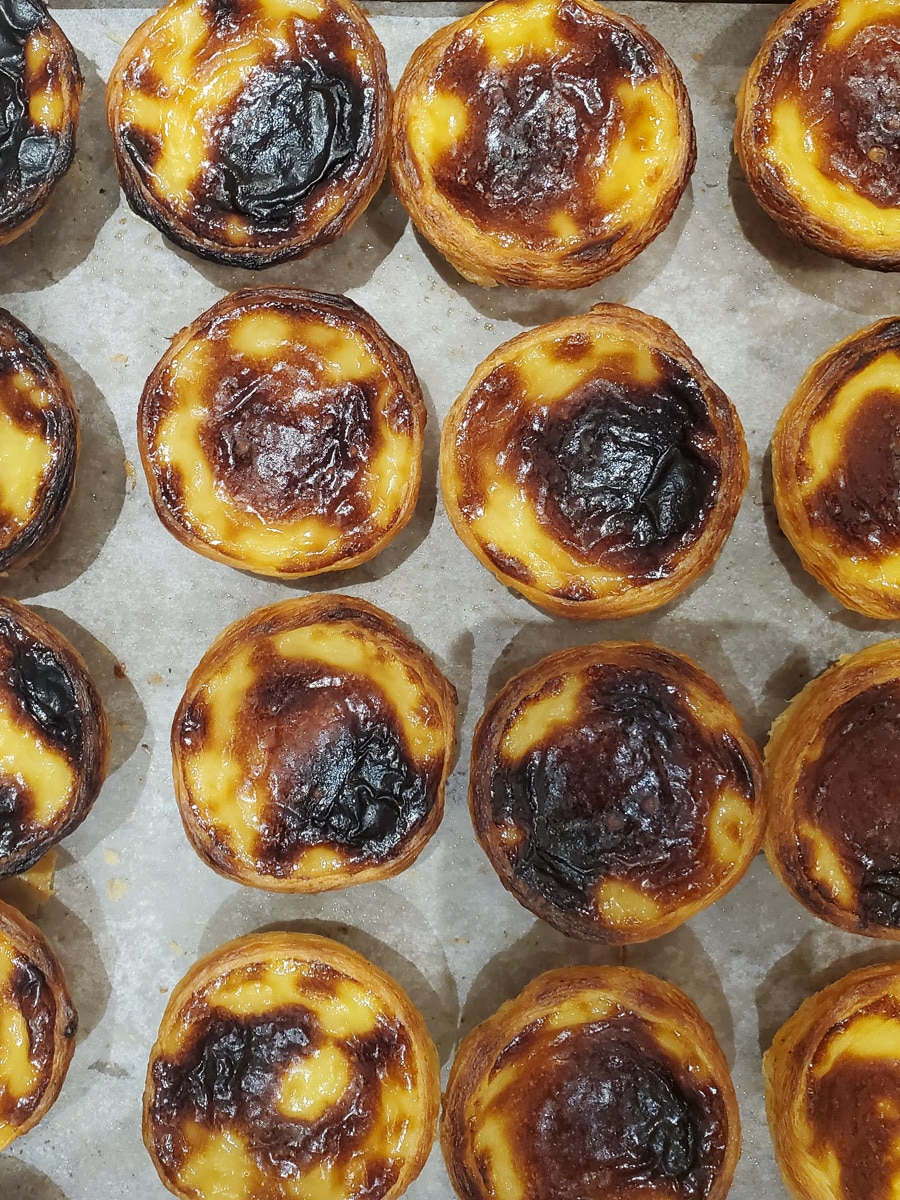 August – October 2019 – Food, Glorious Food! We’ve often been asked, what do you like best about travel? There is never a simple answer. Our initial reply is “the people”, but I have to say that food (and wine) is a close second. We’ve been to quite a variety of countries, each with their own, distinct cuisine, and we’ve never gone hungry. Far from it. Sometimes it is difficult to not bring back a few pounds, even after all the walking we do.

Before we left the US, there was only one Portuguese food item we were marginally familiar with, the pasteis de nata, or Portuguese custard tart. So, the rest of their cuisine was going to be a surprise, and it was, as it turned out, a tasty one! 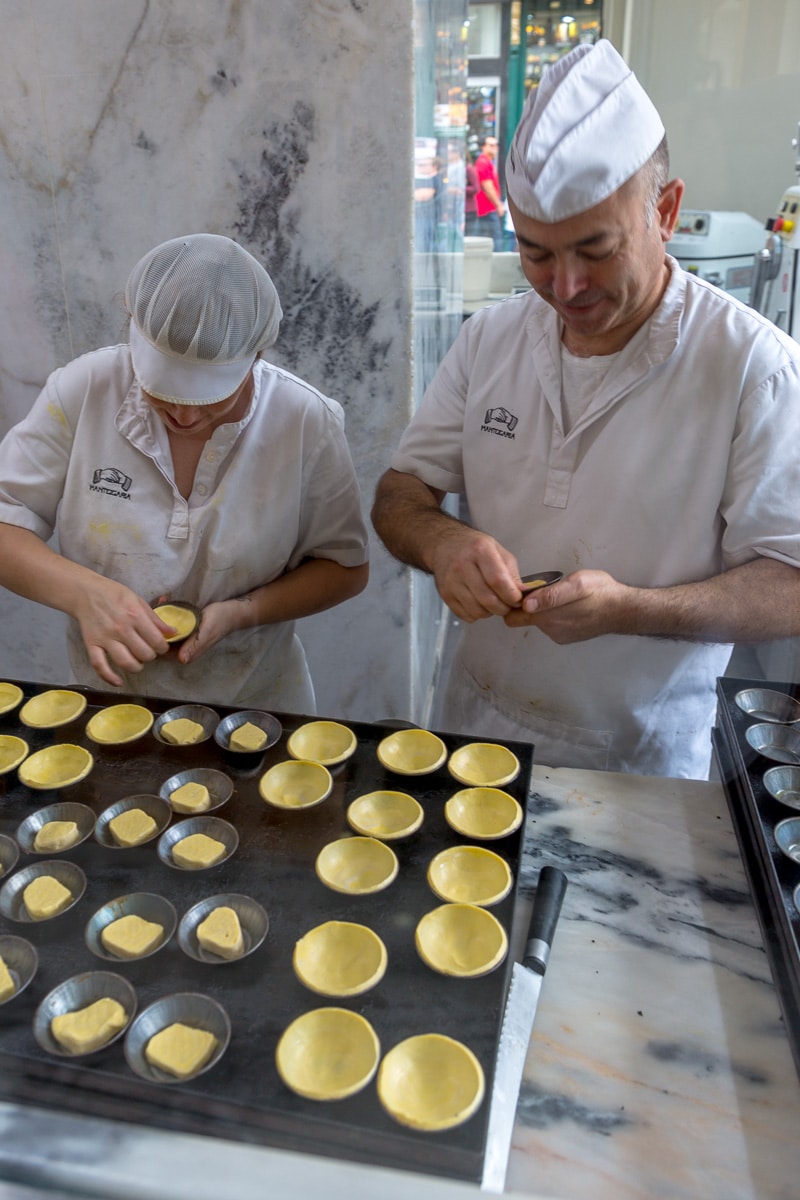 The pastéis de nata were created before the 18th century by Catholic nuns. In the day, convents and monasteries used large quantities of egg-whites for starching clothes, such as friars and nuns’ religious habits. It was quite common for monasteries and convents to use the leftover egg yolks to make cakes and pastries, resulting in the abundance of sweet pastry recipes throughout the country. These tasty items were frequently a quick breakfast option, with a cup of coffee (espresso) or more often a pingo, i.e. a café or espresso with a splash of milk. Sometimes we chose the simpler of toast with butter, torrada con manteiga, but usually started our day with breakfast at home. 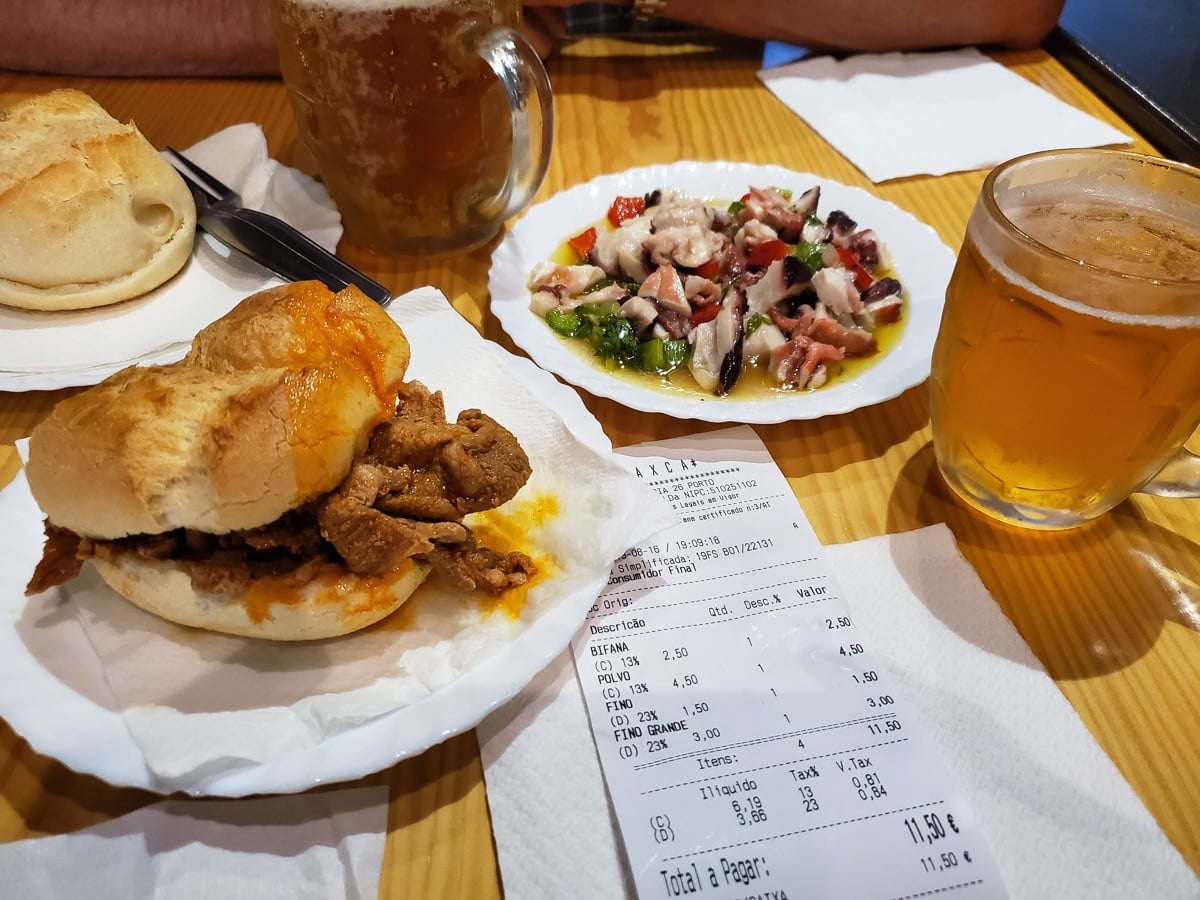 Lunch presented many options, often beginning with soup. Caldo verde being the national creamy, potato-based soup with shredded kale and pieces of chourizo. We enjoyed a number of their traditional sandwiches, from the simple pernil (roasted pork with or without queijo da serra, a cheese made with sheep’s milk, thistle flower, and salt) at Lareira, or the bifana, the traditional Portuguese pork sandwich at the always busy Casa Guedes.

These traditional Portuguese sandwiches are made of succulent marinated pork served in crunchy white bread.  The marinade is made with spices including paprika, garlic, and white wine. The bread has a delightfully crunchy crust on the outside while being oh so soft on the inside. OK, sometimes we don’t get enough whole grains or veggies, but we feel a necessity to eat like the locals most of the time! Quite delicious! 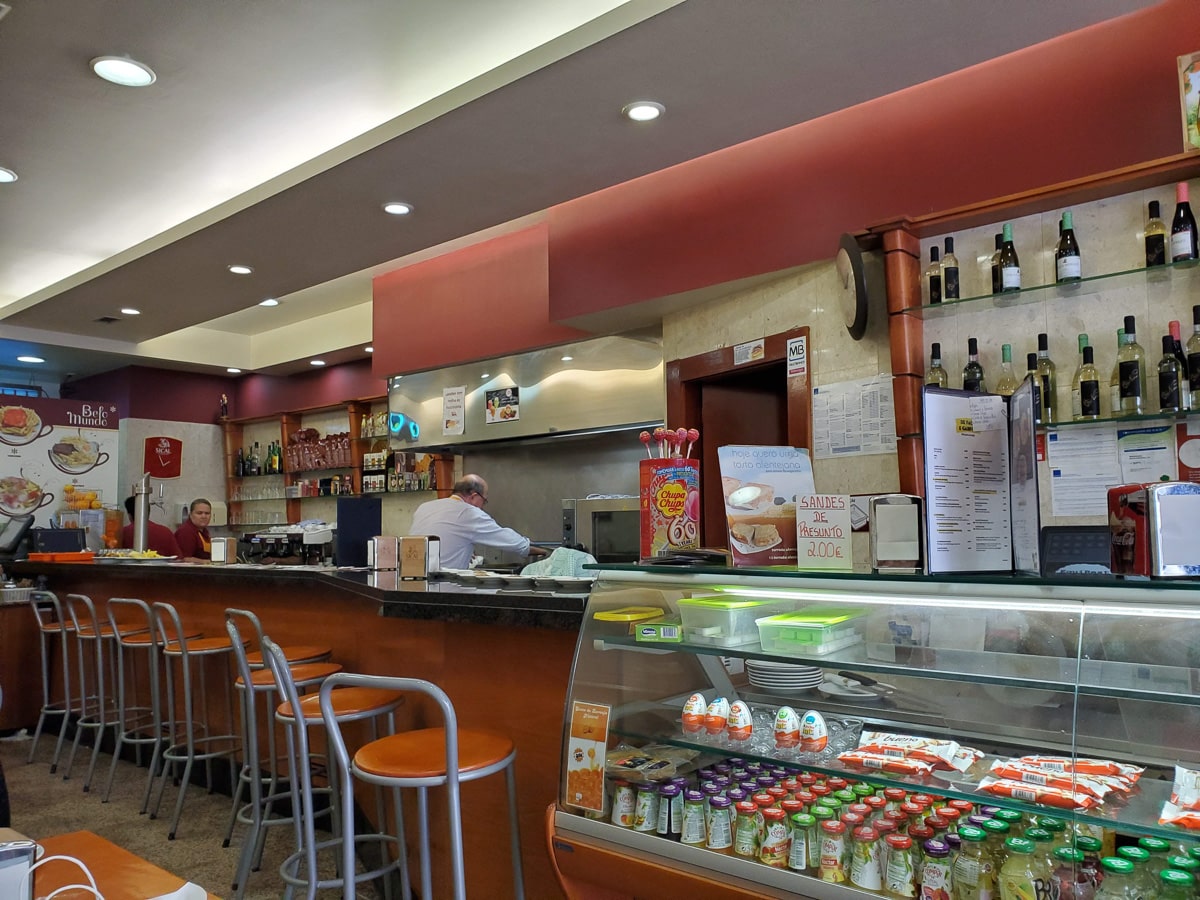 The local Confeitaria Belo Mundo was a short walk from our apartment, and we ate there often during out stay. There was nothing fancy about this place, but they served good, honest food at a great price, and they seemed to appreciate or were at least amused by our attempts at speaking Portuguese. It was one of those places where it seemed the patrons were all locals.

Another local food spot we frequented, just down the street from our apartment, was Aquele Tasco. They served excellent wines, the food was really good, value was excellent and the service was both friendly and efficient. We ate there several times. 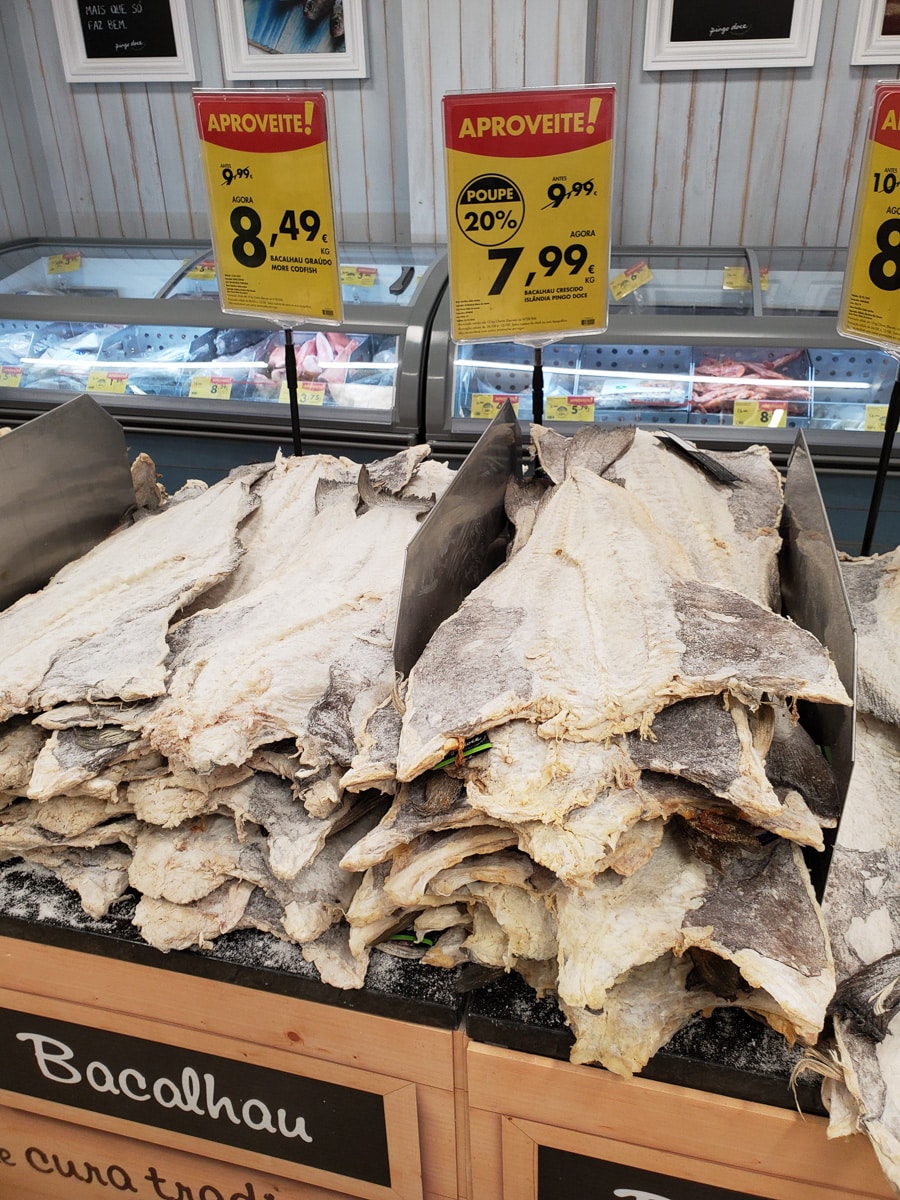 Without question, the one staple food that permeates Portuguese cuisine is Bacalhau (salted cod), the national dish of Portugal. It is on every menu in one form or another and stacked like lumber in supermarkets. There are hundreds of recipes for bacalhau and people here eat more of it than anywhere else in the world. We had it prepared several ways grilled, baked, stewed,  and deep-fried as fritters or cakes. I can’t say it was our favorite seafood. We reserve that honor for … sardines! 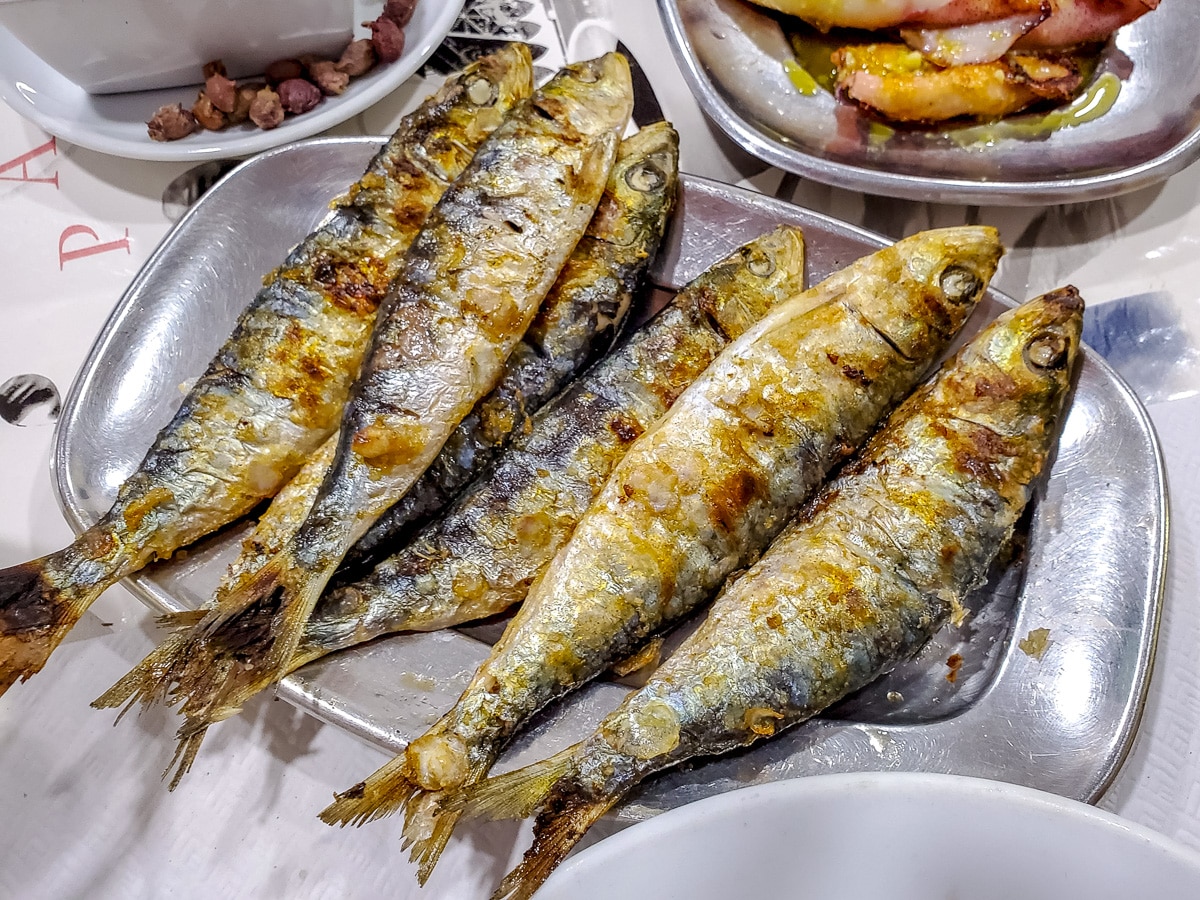 Neither Chris nor I had never eaten sardines and were only barely familiar with it as a fish-product purchased in tins. However, while wandering the town of Matosinhos after a visit to the market, we came upon a simple, handwritten sign advertising a small local restaurant, Pires Restaurante that featured sardinhas grelhada (grilled sardines).  Sardinhas grelhada  are the summertime food of choice in Portugal, and in some coastal towns, the smell of grilling sardines can permeate the streets for weeks. Served hot off the grill, accompanied by boiled potatoes, sliced tomatoes drizzled with olive oil and sprinkled with sliced onion, this was definitely the way to experience this fish for the first time! And the first time we enjoyed this meal, we also ordered grilled squid. It was a struggle to finish so much good food, but it was such an delicious experience, we returned again two weeks later (but only ordered the sardines). Oh, and you always order a bottle of vinho verde (the local fresh young wine) to complete the feast. 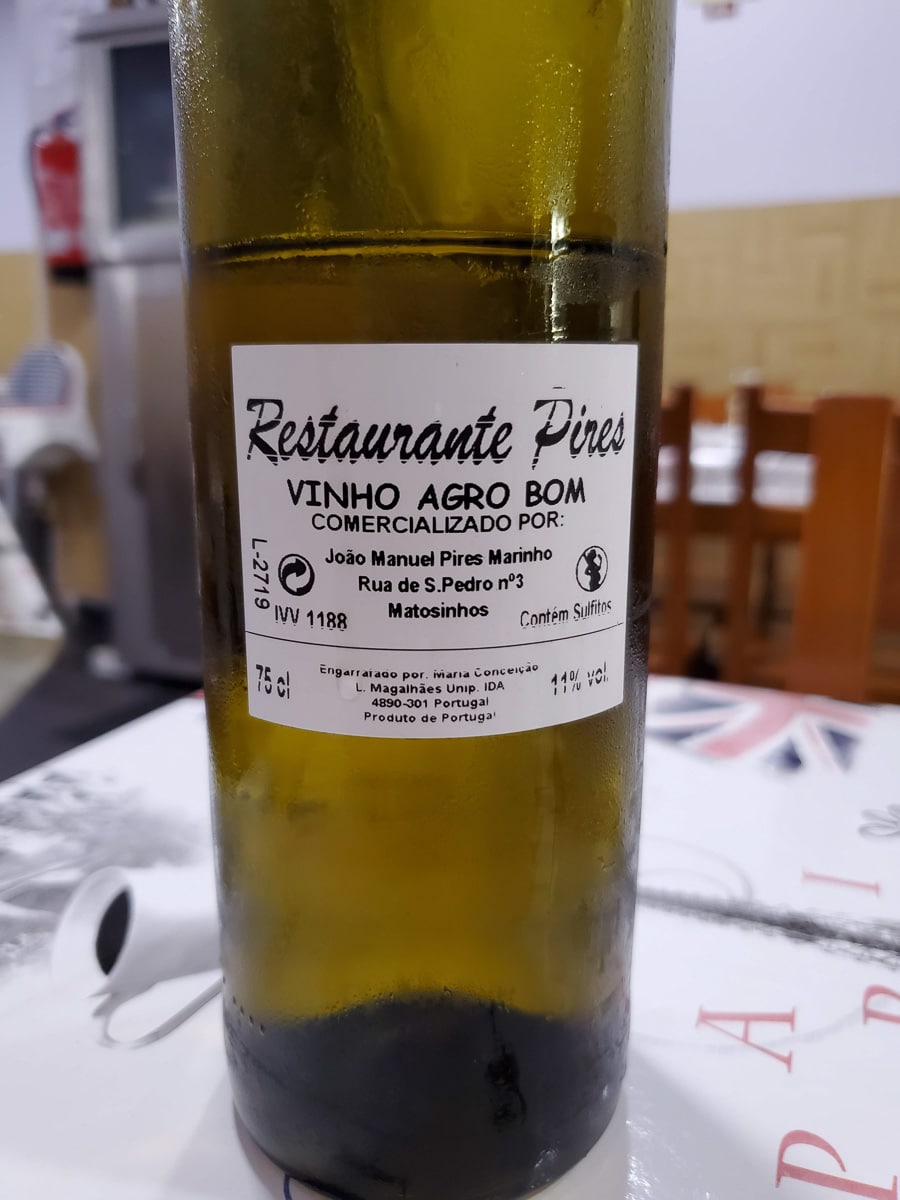 Vinho verde (literally ‘green wine’).  A better translation would be “young wine” as it is usually released within 3-6 months after the grapes are harvested. These wines may be red (tinto), white (branca), or rosé, and are best consumed soon after bottling. They are usually served cold and have a light and refreshing effervescence that takes place naturally in the bottle.

We had read that a visit to Porto is never complete without tasting one of its most iconic dishes, the king of sandwiches, the Francesinha. This literally means “little French girl” and it is said to have been brought to Porto by an immigrant returning from France as an adaptation of the French toasted sandwich, croque-monsieur. Usually, a francesinha is made with bread (the thicker the better), wet-cured ham, linguiça (a Portuguese sausage), steak or roast beef, then everything is covered with melted cheese and a special tomato and beer sauce. Most times it’s served with a fried egg on top and lots of batatas fritas (french fries) that you can dip in the sauce.

Some places like to innovate by adding extra ingredients, but what really makes the difference in the francesinha universe is the sauce. Of course, Chris had to experience this popular item but I think he only ate one in the three months we spent in Portugal. I’ll admit that I took a bite but it really was too heavy for me, and I don’t seek foods covered in sauce. So I crossed this item off my must-eat list after we’d been in Porto for about a month. 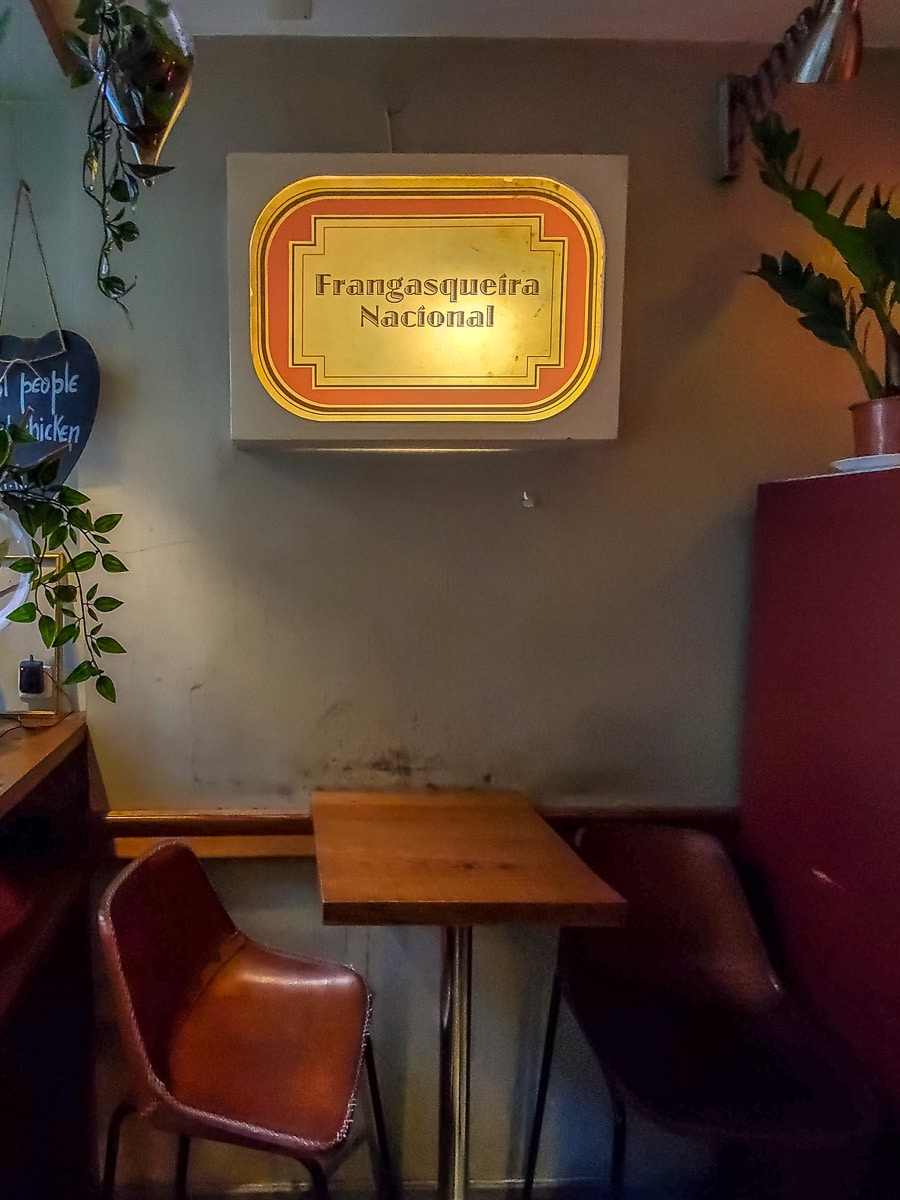 If we wanted an easy take-away dinner for home, frango assado con batata frita (roast chicken and French fries) from Pedro dos Frangos was an inexpensive option near our Porto apartment, and in Lisbon we became regular customers at Frangasqueira Nacional, ordering the grilled chicken, or ribs, and sometimes grilled sausages. A variety of simple side dishes completed an incredibly delicious dinner, and at a very low price. The ambiance alone was enough to return several times to this tiny but popular take-away, but the food … Ummmm.

In all of Portugal, pork is the primary meat you’ll find on the menu, whether porco preto, secreto, or presunto. We discovered a local restaurant Beher that specialized in quality Iberian ham. Considered a tapas, wine bar/restaurant, it was only two blocks from our apartment in Porto, with a modern simple design, and quickly became our go-to dinner spot for a casual, tasty and economical meal. 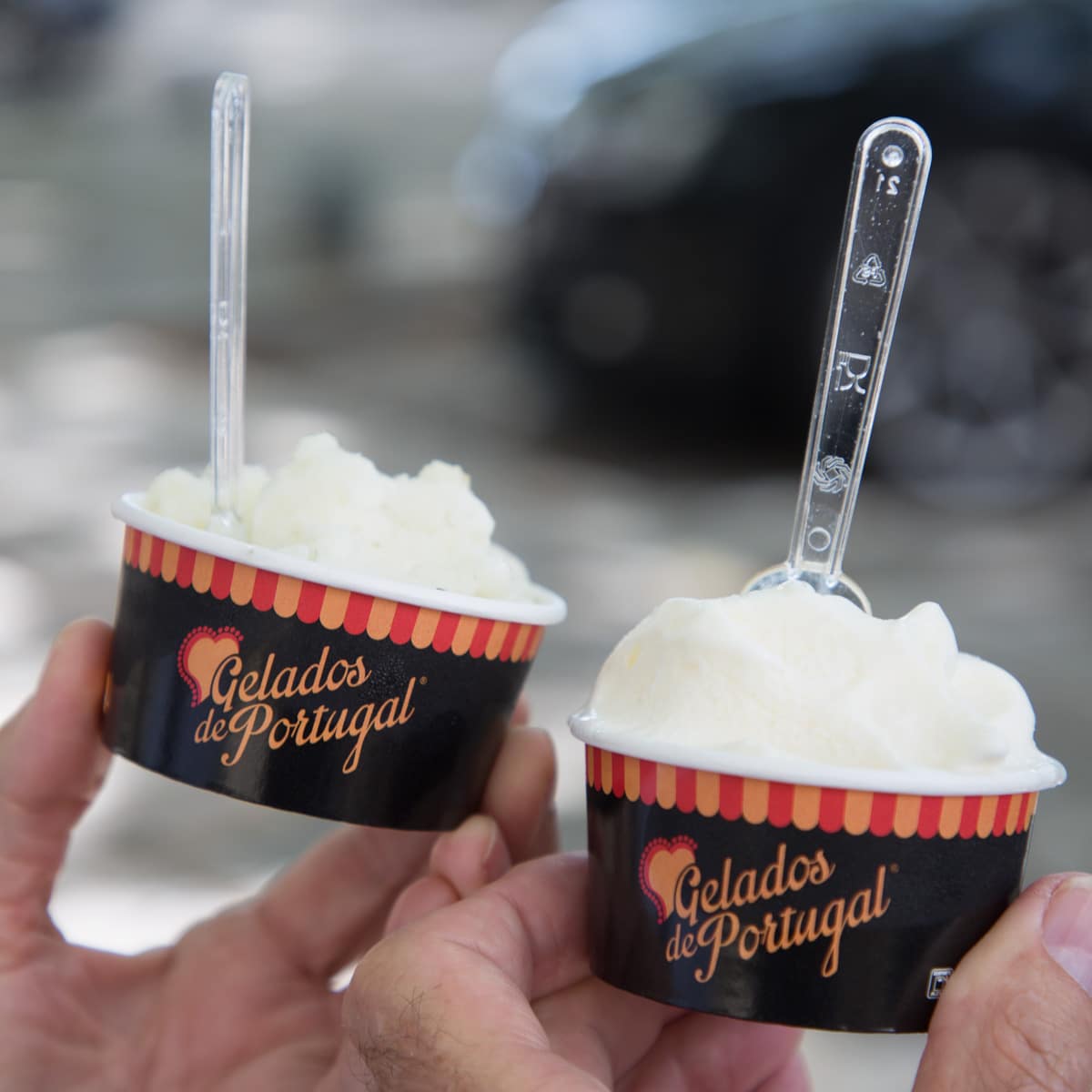 Travel is not complete without sampling a local burger and we had several great ones in both Porto and Lisbon. It was good to read the menus and find an option to have it served with a salad instead of a bun. It never hurts to shave a few calories off a meal!

We had so many good meals we can’t list them but, simply put, the flavors of Portugal were hearty, unpretentious and delicious.