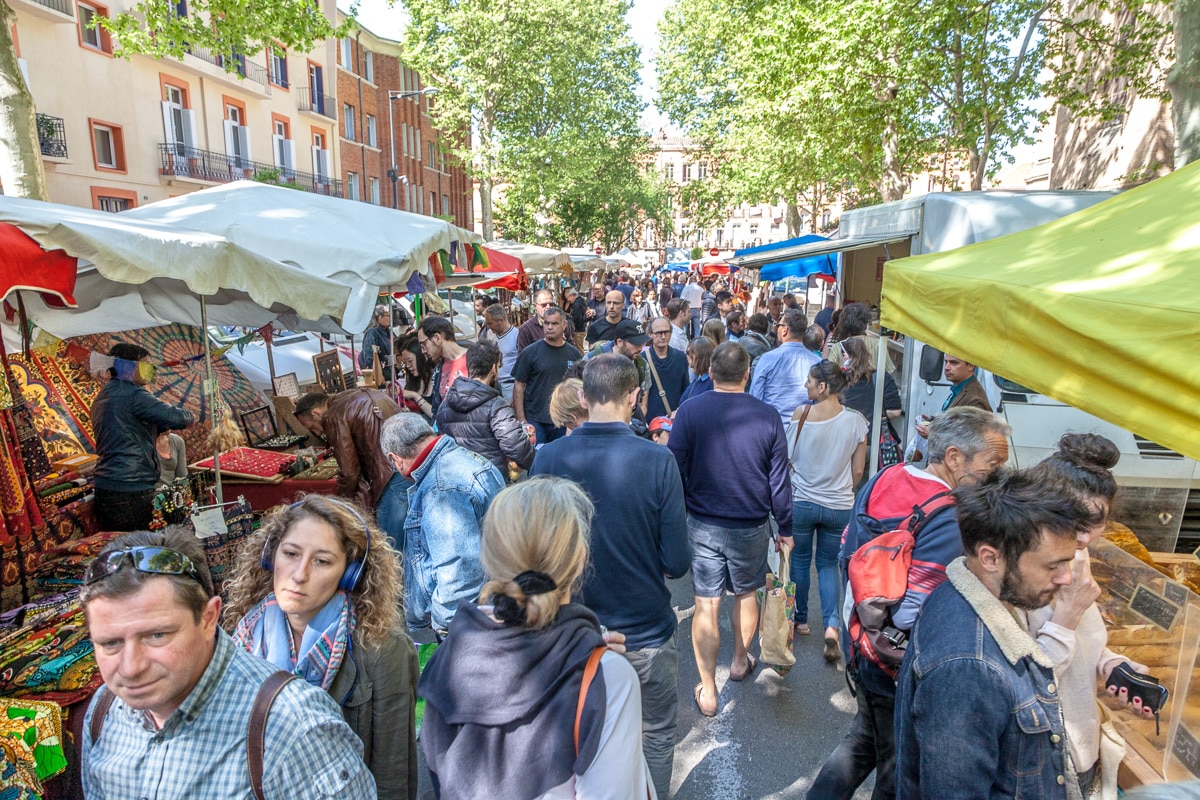 The question has come up before. How do you spend your days?

More often than not, some portion of our days are spent shopping, and though Jeannie is frequently distracted by windows filled with clothes, shoes, jewelry, and other shiny things, our shopping is for food.

It doesn’t occupy all of the day, but a portion of almost every day involves going to the market. Not just THE market, but one of two large, daily, covered markets (marché couvert), or the various small to large street markets that are held according to mystical schedules – some are daily-ish, some only on other, specific days of the week. However, they all close somewhere between noon and 2:00-ish, and by then the goods have usually dwindled. 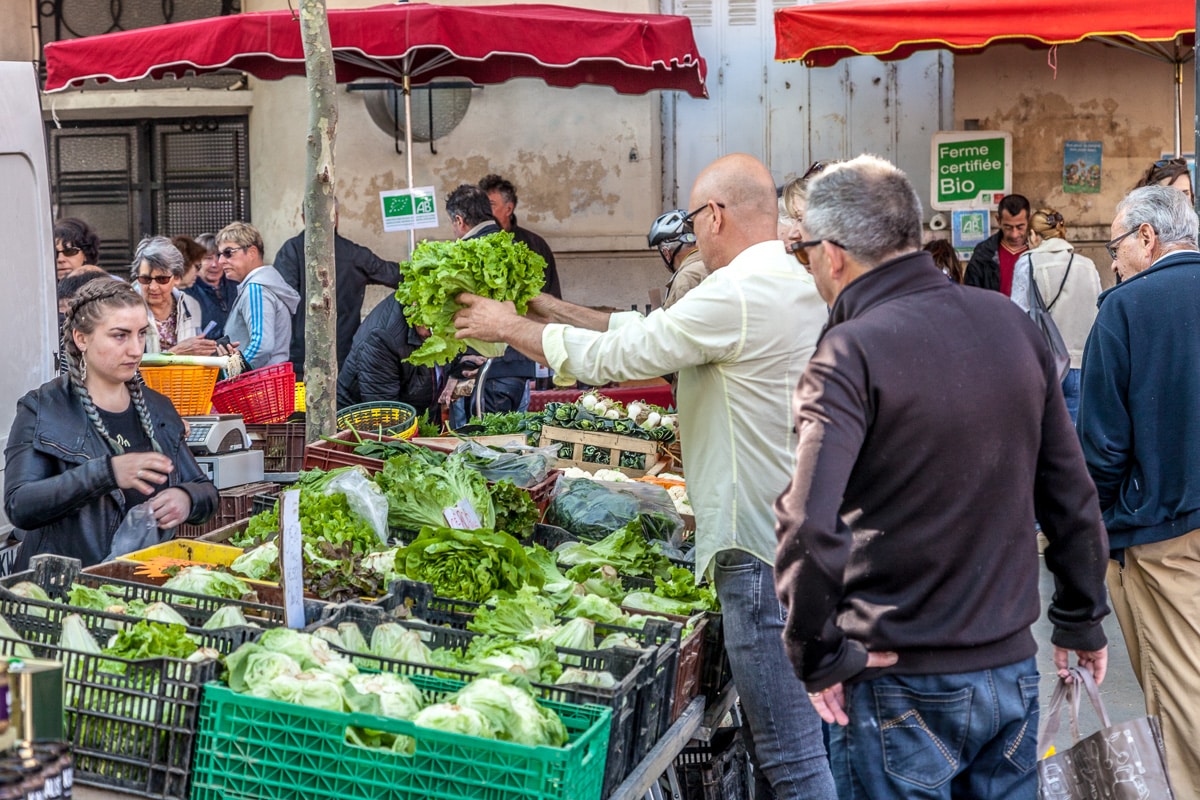 Since we don’t have much pantry space and the refrigerator is small, we don’t stock much more than the bare essentials, and so, to market we go. Lunch and dinner are the primary goals of these shopping adventures, and each trip involves stops at 3-5 stalls.

The fresh fruit and vegetable sellers have a delightful variety of, mostly locally grown produce, and is offered according to the natural cycle of Spring, Fall, Summer and Winter. 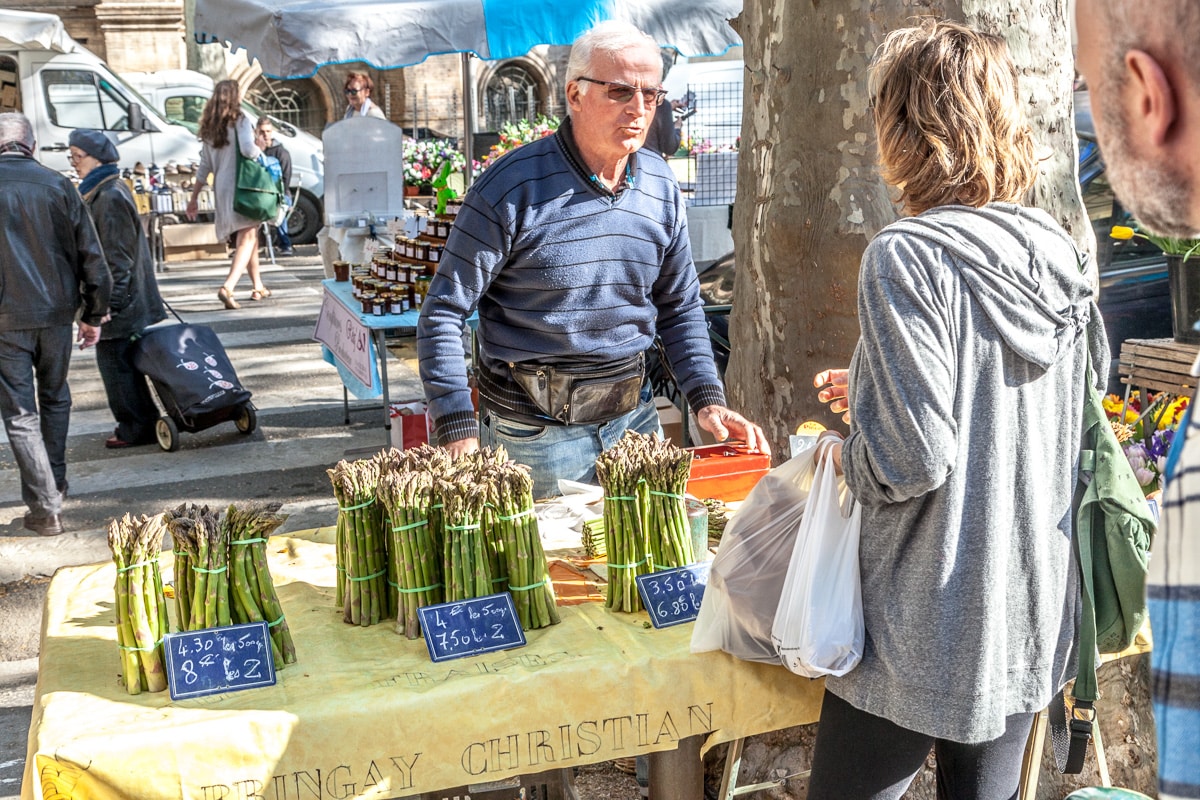 Some vendors are also local market-gardeners, selling their own produce obviously recently harvested from a small garden, while others offer products imported from further afield.

It is wonderful to be here long enough to have access to the parade of seasonal specialties that, when the season is over, mostly won’t be available until next year. Here in the south, April brings us artichokes, asparagus, chard, fennel, onions and scallions, spinach, radishes, lettuces, carrots, celery, cabbage, endive, and strawberries. It is also fun trying figure how to best use the different vegetables given our limited cooking facilities. 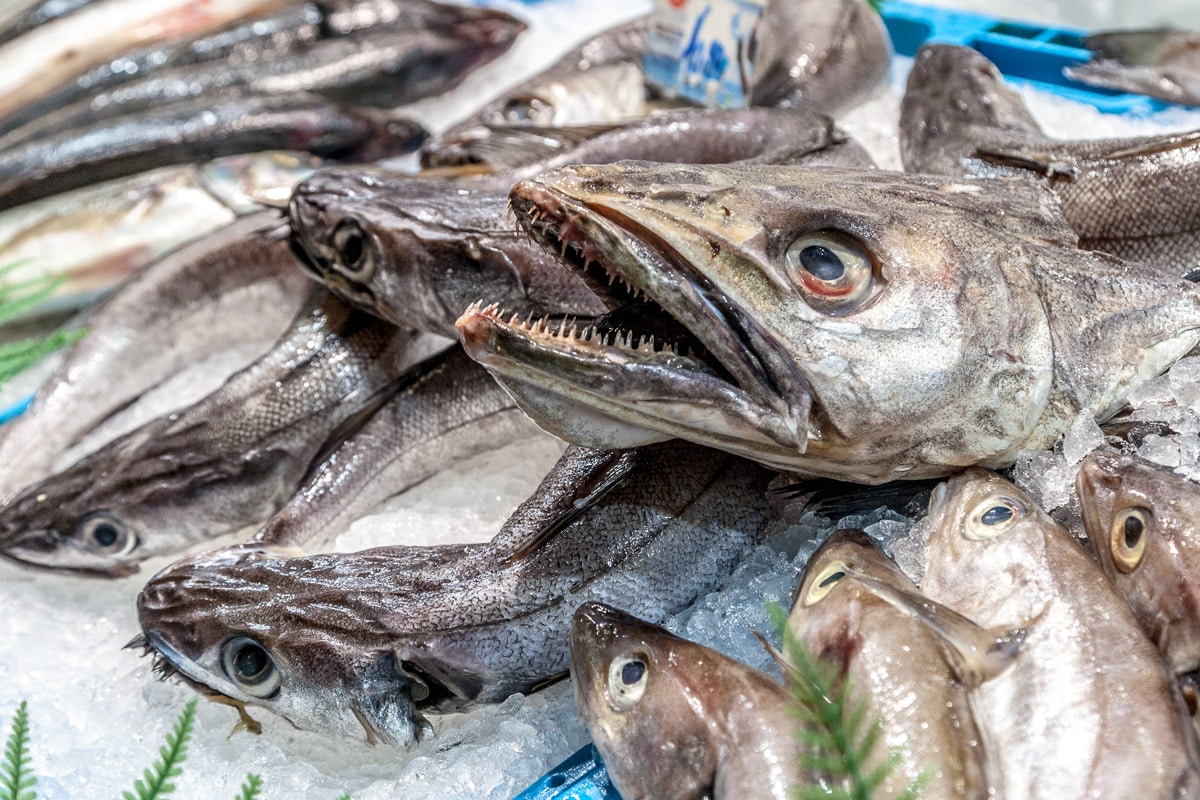 There are different vendors for different meats; some specialize in beef, some in pork, some in chicken, duck, goose, turkey, pigeon, etc. Then there is the poissonnière or fish monger, each with an amazing array of delicacies from the sea, and of course if the fish you want is whole they will clean and filet it for you. 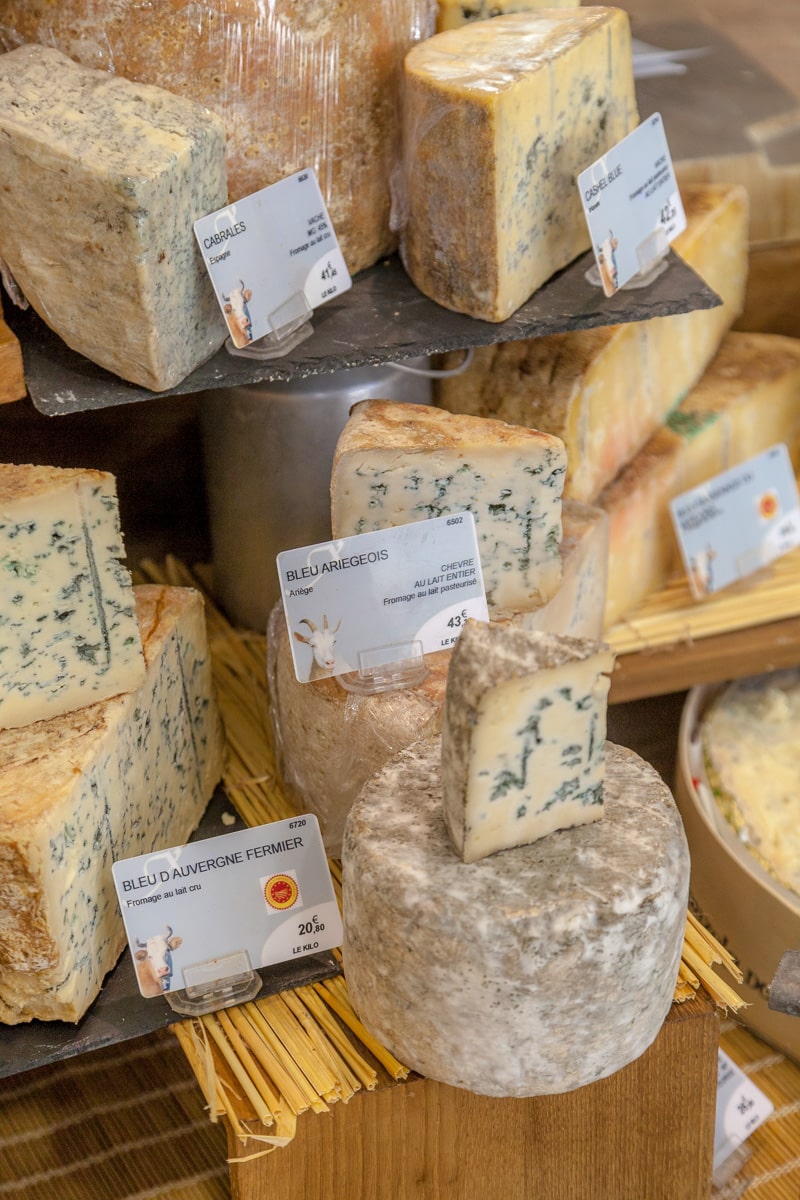 A visit to the fromager or cheese dealer is always on the list, but it is so difficult to make a decision. Of the hundred or so kinds of cheese available at any one stall to choose from there are a vast number of options. Do you want cow’s milk, sheep, or goat? Do you want it firm, hard, soft, creamy? Strong or mild? Every choice is an adventure.

Of course, in the world of cheese, there is a descriptor that one cannot fail to mention – fragrance. Yes some cheeses are, for lack of a better term, stinky. But most, if you can get them past your nose, are delicious and their flavor bears no resemblance to the fragrance. I have heard an appropriate saying that “some cheeses have the fragrance of the feet of angels.” 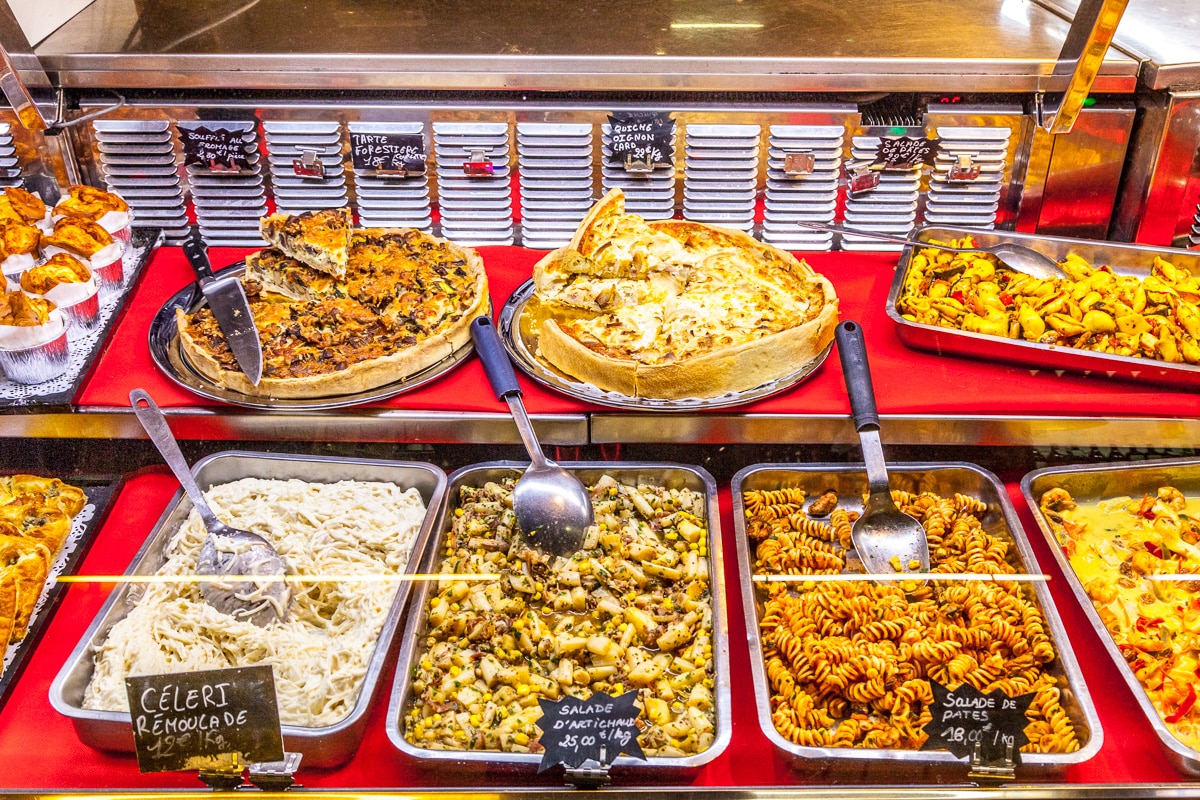 Another category of vendor likely to be found in the marché is the traiteur. Loosely defined as a delicatessen, the word derives from the verb traiter – to treat, literally referring to the action of “treating” someone to something, i.e. a meal. Traiteurs were the precursors of restaurants before the 18th century.

For our purposes though, the traiteurs are where we go to find prepared dishes that merely need reheating. Generally made from fresh ingredients from the vendors in the marché, the dishes are often regional and/or too difficult for us to attempt in our basic kitchen, they are generally delicious, easy, and can be comparable to what we might find in a good restaurant. 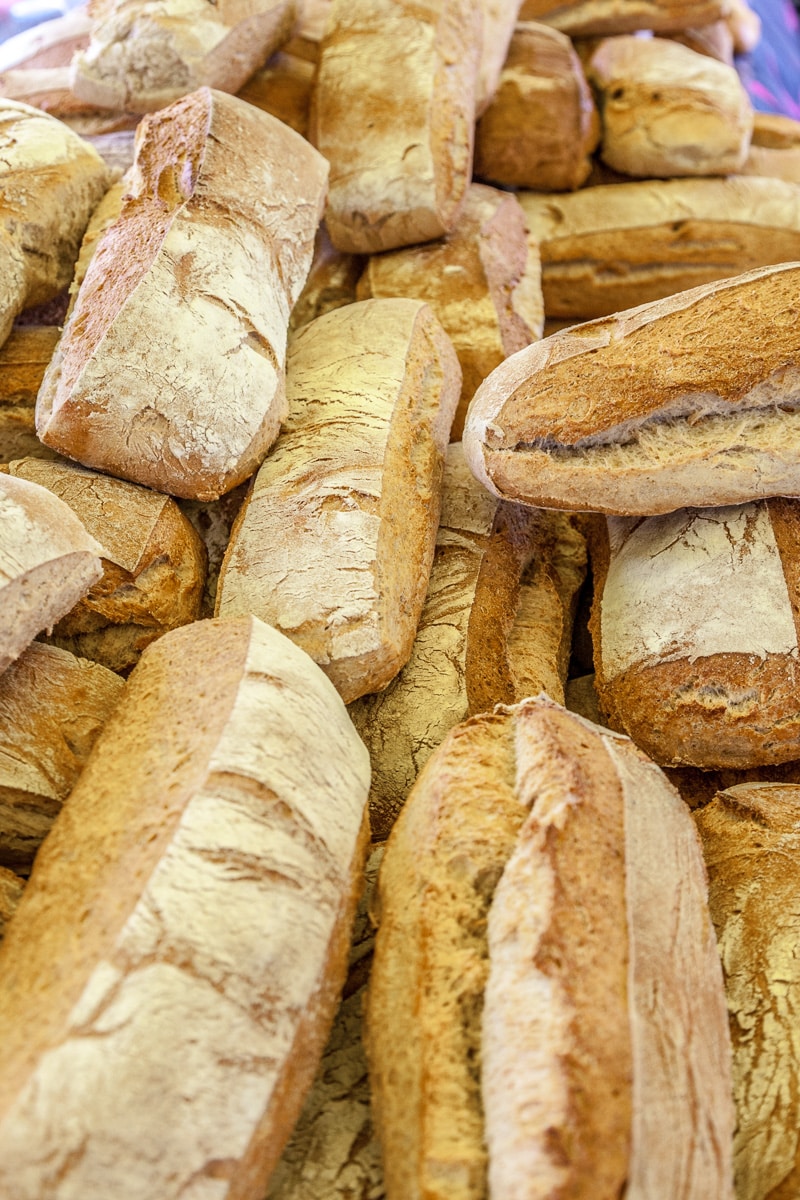 No discussion of French food would be complete without mentioning bread or pain (pronounced pan). Simply put, of all the places we have ever traveled, nowhere compares with France when it comes to bread.

Upon entering French boulangerie or bakery the first thing you notice is the delectable fragrance of fresh baked bread. Next is the incredible variety of breads beautifully displayed and stacked everywhere. Sticks of bread or baguettes, short, long, thin or thick; giant plank-like loaves, boules or round loaves, whole meal breads (pain complet or pain aux céréales), rye breads (pain de seigle), and sourdough breads (pain au levain) to name but a few. 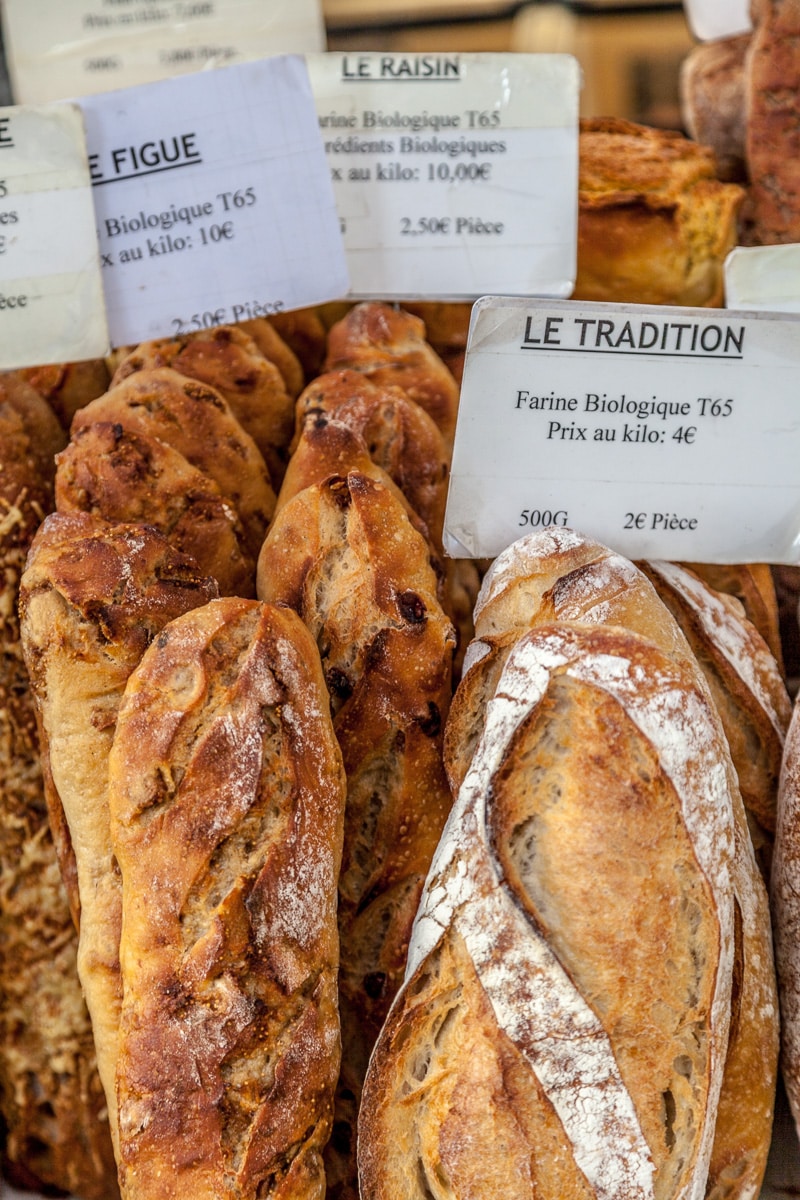 La baguette ordinaire – the ordinary baguette – by law, can only have four ingredients: flour, yeast, water, and salt, and must weigh 250g. The law was made to ensure that everyone had access to a baguette for a low price. Though better than most baguettes found in the US, it is still our last choice for bread when shopping.

Our go-to baguette is the baguette tradition, baguette à l’ancienne, or baguette de campagne that rarely costs more than €1.30.  In the better boulangeries the breads are often made and baked on the premises. A good baguette, when you cut into it, has large, irregular holes, it’s soft on the inside with a decidedly crunchy crust.  Regardless of the quality of the baguette, lacking preservatives they’re only good for 6-8 hours or so. 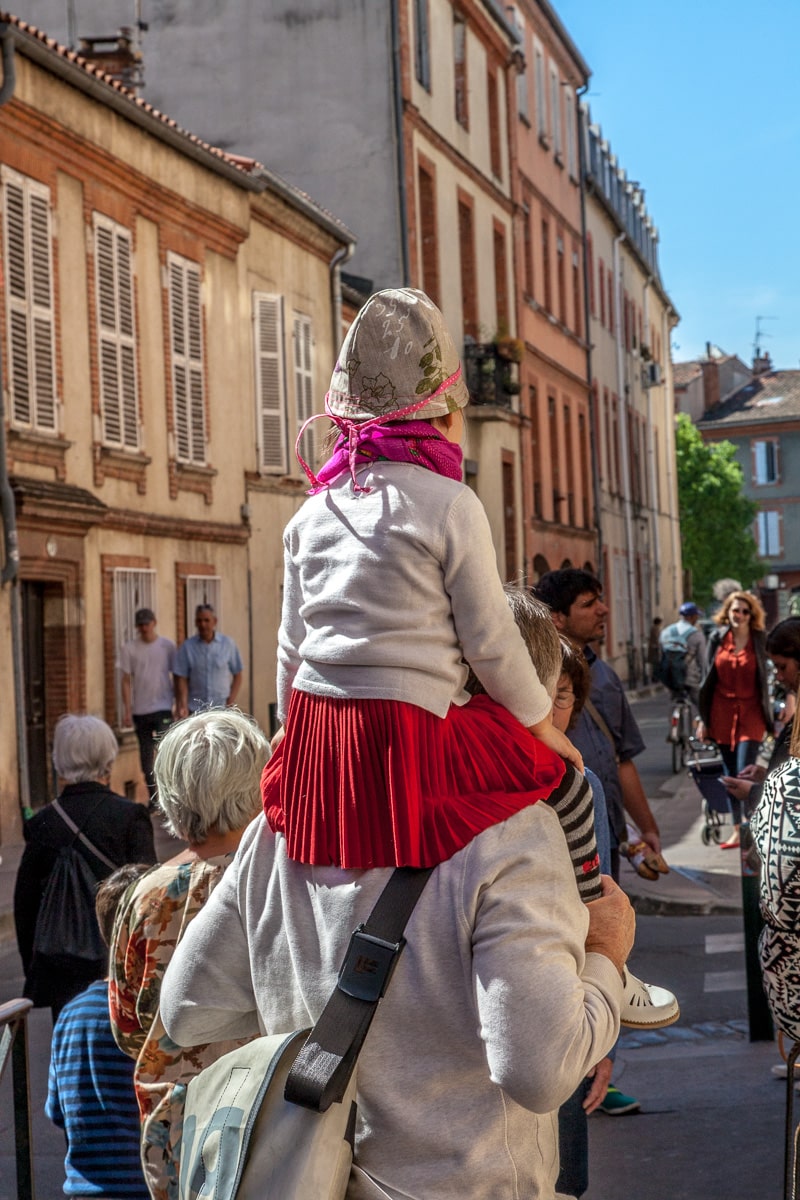 Do what you may, they might be usable as toast the next morning, but will likely be good for driving nails.

Whenever you see the French walking down the street on their way home from the boulangerie with a baguette sticking out of their shopping bag or carrying it in their hand, it will invariably have a bit of the end missing. It seems that everyone nibbles the end as soon as they leave the shop. We, following the local custom, do the same.

Wine is subject in itself, and will have to wait for another blog. We’ll keep sampling a lot in order to properly write an informative post. But for now enjoy the images and Bon appétit!