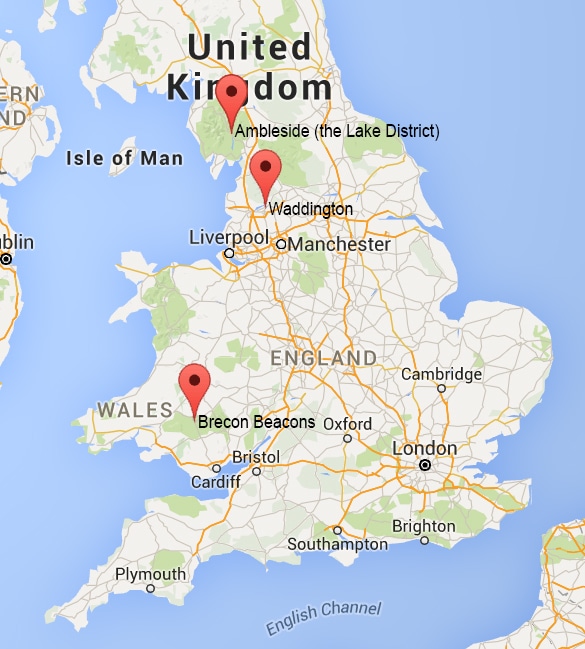 It was about 31 years ago when we made our first journey to England. We rented a car in London that, even then, involved navigating crazy traffic just to get out of the city. If I recall, over the first couple of days we planned to visit Stonehenge first then up through Wales on our way to the Lake District.

In those days, the English Tourist Information offices had a scheme called BABA, or Book-A-Bed-Ahead. You could go into the local TI wherever you were, let them know where you were going, and they would locate a Bed & Breakfast in or near the town of your destination and make all the necessary phone calls and arrangements. Brilliant!

We had heard about the region of the Brecon Beacons of Wales somewhere, and for this particular night we had arranged a B&B in a home out in the middle of the Brecon Beacons National Park. Arriving earlier in the evening than expected, we were greeted at the door by the owner, a small elderly woman, who informed us that she was teaching a tatting class at the moment, but wouldn’t be much longer, so would we mind just waiting in her large kitchen. 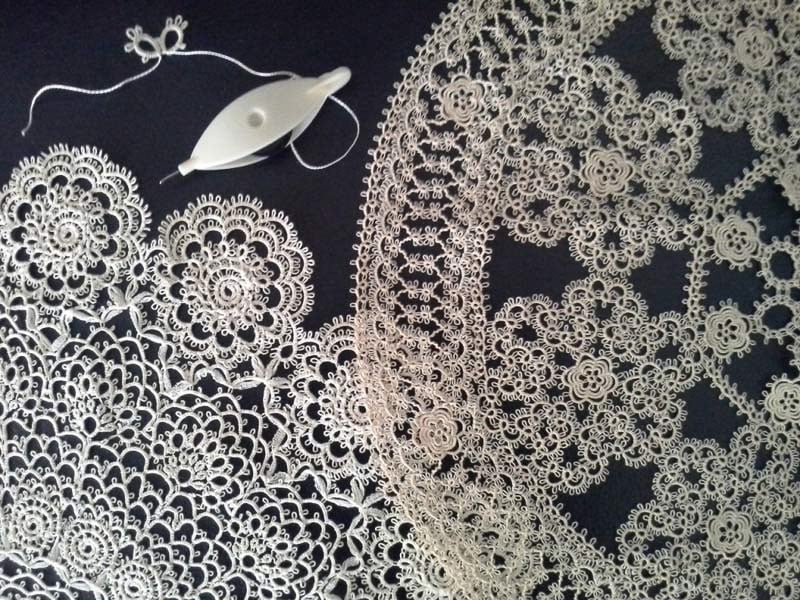 Sitting at the large, old oak table, it was obvious that this was a working kitchen. A large gas stove, pots and pans hanging on pegs on the walls, and all the implements one would expect in a country kitchen.

As the conversation in the living room indicated that the class was breaking up, the “students” began to exit through the kitchen, and we were greeted by each as they made their way out. I recall about a half-dozen ladies of all ages carrying their baskets and bags of threads and fabrics.

Once the class had departed, save for one neighbor who had remained for tea and conversation, the four of us sat around the big kitchen table discussing our travels, both where we had been, and where we were going.

When we explained that our most distant destination was to be the English Lake District, our hostess’ eyes brightened, a small smile came across her face, and she asked, “Why would you want to go to the Lake District? Wales has everything the Lake District has except for the lakes.”

Well, she and her friend helped us re-plan our trip, staying in Wales, and never making it to the Lake District. It was the first of many times that we have taken suggestions and advice to alter our plans, and they have always turned out to be good or better than we could imagine.

But we never made it to the Lake District, until now. 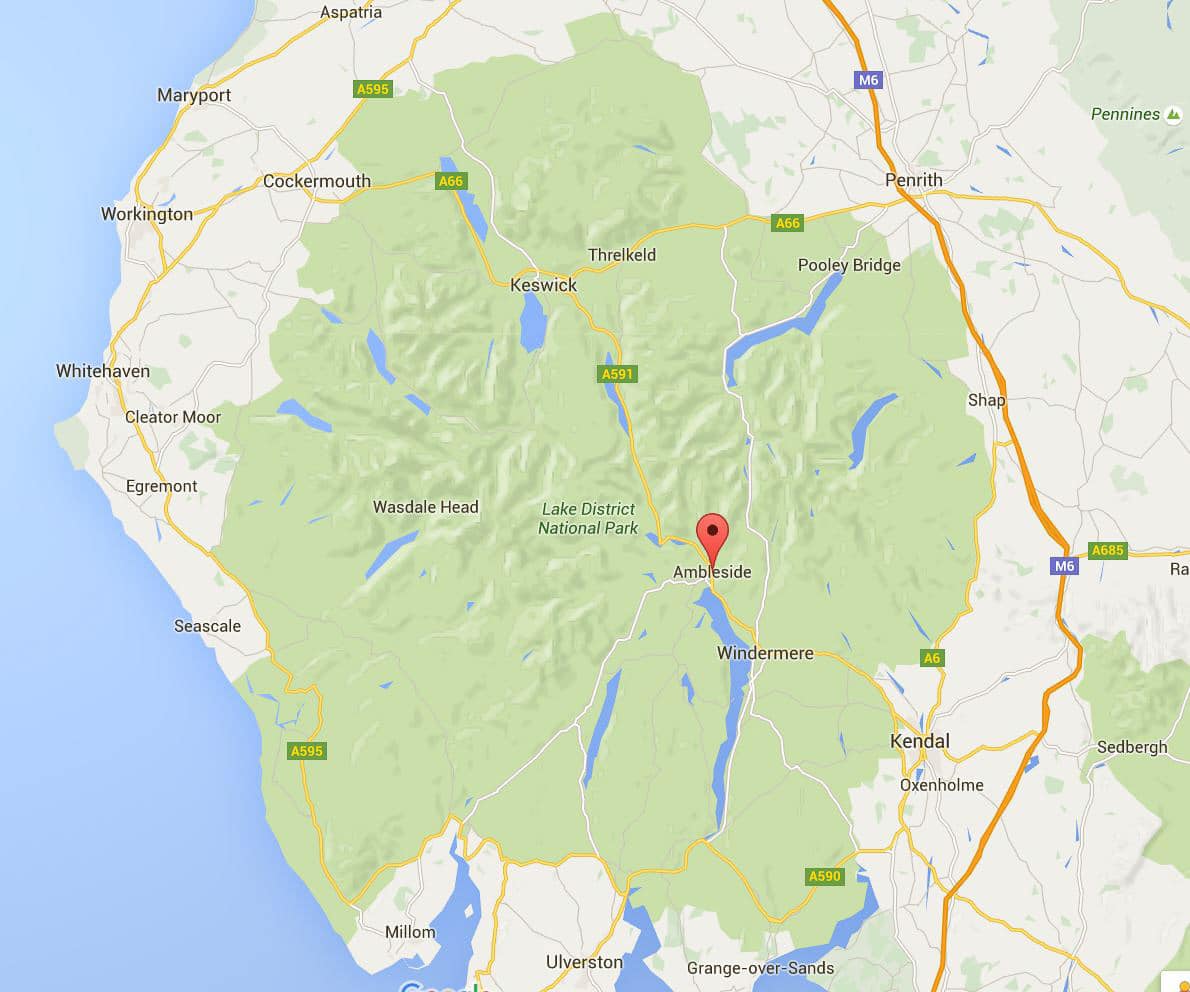 Located in Lake District National Park (created in 1951) in Northwestern England, this area is famous for its lakes, forests and mountains (or fells). All of the lakes are long, deep, glacially carved bodies of water, and curiously only one is actually called a “lake”, all of the others are meres, tarns and waters.

Windermere is the largest natural lake in England. It is 18.08 km (11.23 mi) long and up to a maximum of 1.49 km (0.93 mi) wide. There is only one town or village directly on the lakeshore, it is Bowness-on-Windermere, and the village of Windermere does not directly touch the lake. However, we stayed in the town of Ambleside, just north of the lake.

In the 18th and 19th centuries, William Wordsworth, Samuel Taylor Coleridge, Percy Bysshe Shelley, Sir Walter Scott, Nathaniel Hawthorne, and many others associated with English literature found inspiration in the hills, woodlands, and lakes of the area. Even Peter Rabbit had his origins here, when Beatrix Potter was in residence at Hill Top Farm in the Lake District. 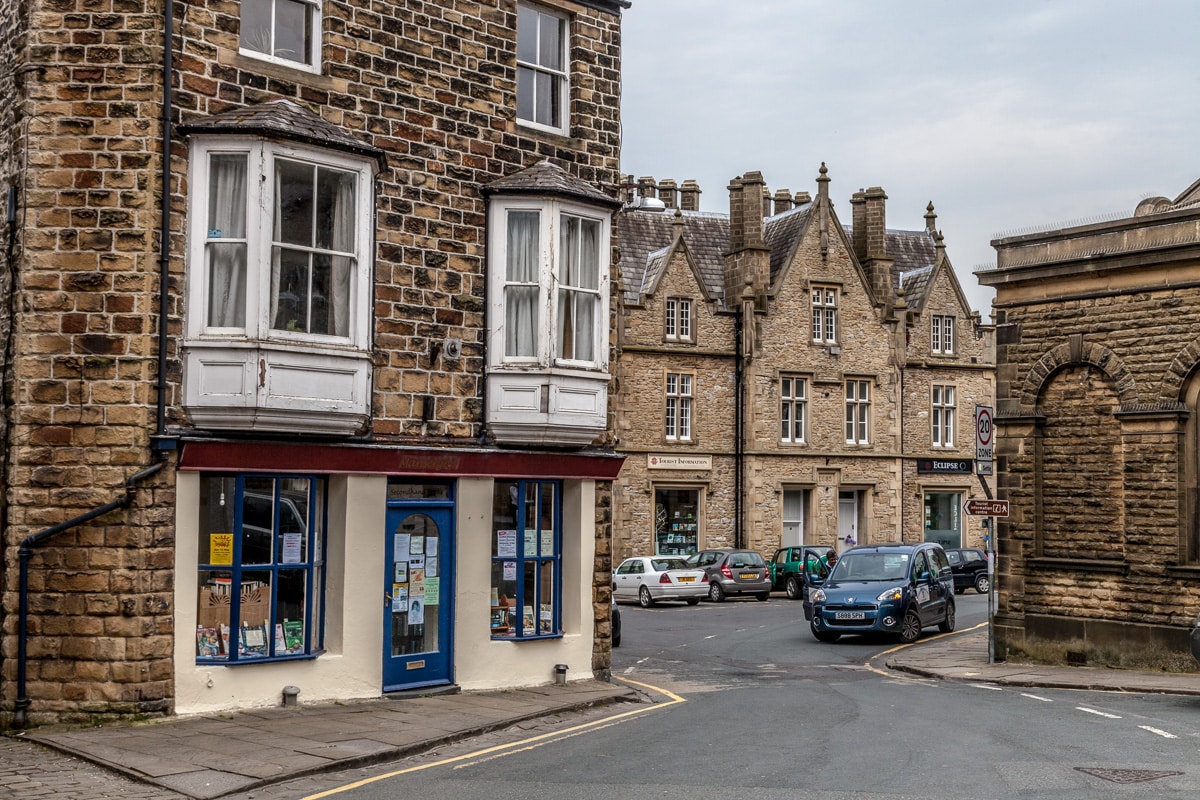 The route we had chosen took us up through Yorkshire, and on the way, we made a brief stop in Settle, a small market and art town, where hiking, road cycling and mountain biking seem to be the major activities. With the diverse landscape it wasn’t hard to see why. Also in the neighborhood we passed through two villages whose names brought smiles to our faces: Giggleswick and Wigglesworth.

The drive continued through some beautiful rural areas and we even located an Andy Goldsworthy sculpture near Ingleton in North Yorkshire. 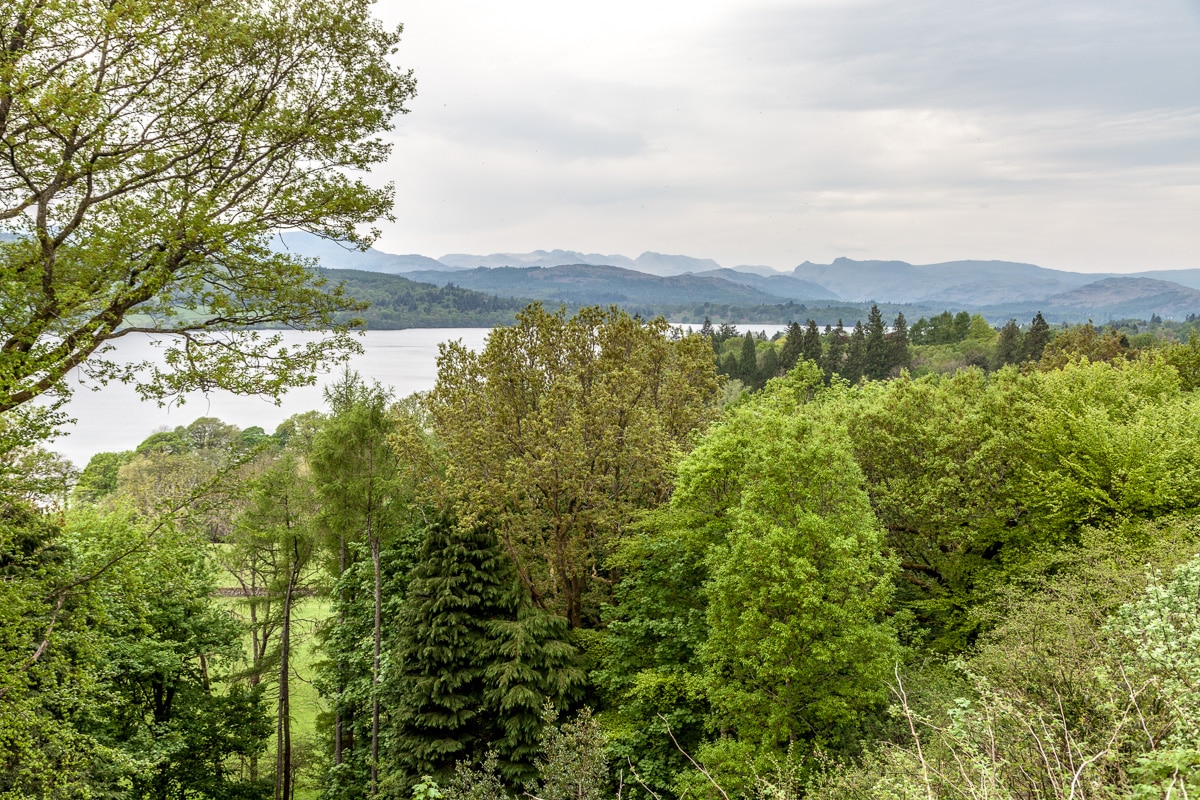 After entering the Lake District, our route took us near Bowness-on-Windermere, and we drove through, stopping for a picnic overlooking the mere (lake). After settling into the Hillsdale Bed and Breakfast in Ambleside located near the center of this small town, we took a walk and came to some Roman ruins near the shores of Windermere.

After exploring the ruins and the northern shore of Windermere, we returned to our room and had a delightful Thai dinner in town before turning in for the evening.

The following day we had planned to take the “Coffin trail” from Ambleside to Grasmere. The five-mile path is so called because in the days before the road was built, it was used to carry coffins on their final journey to St Oswald’s Church in Grasmere. 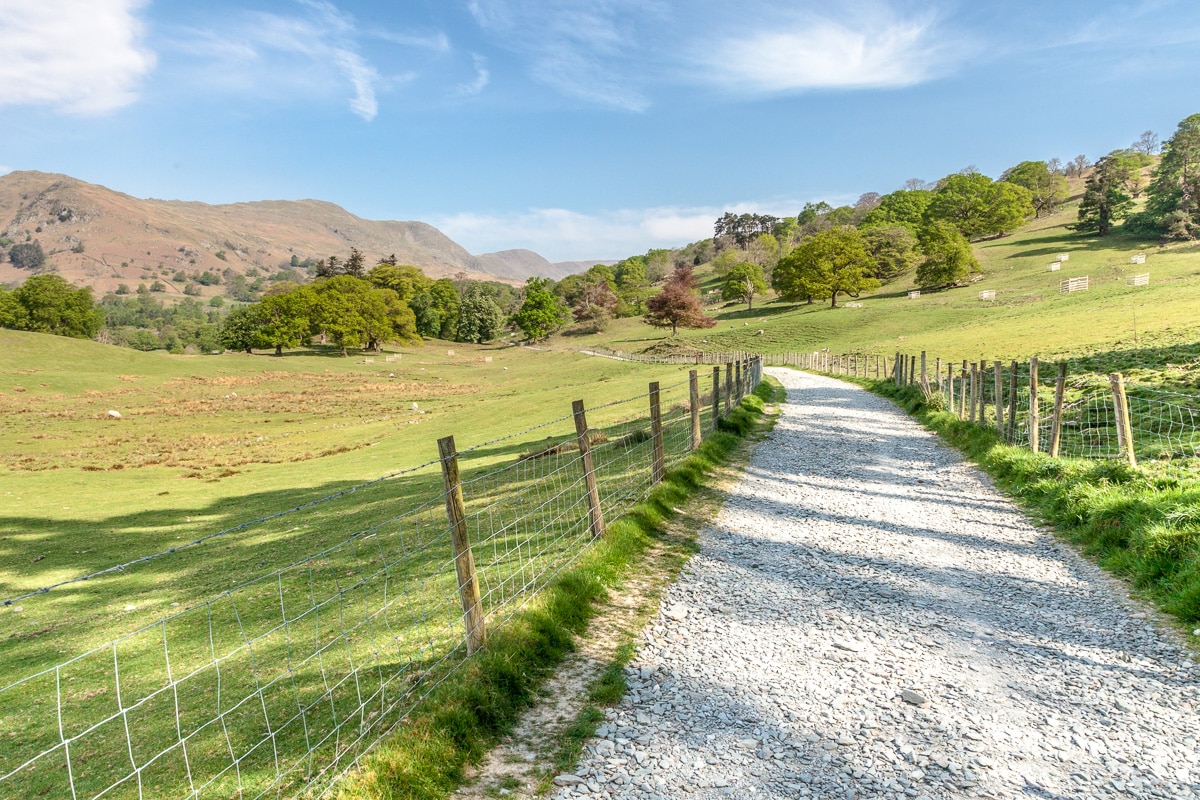 The route was a wonderful combination of pastures, woods, a side trip through the grand estate of Rydal Hall and its gardens, and we even passed by William Wordsworth’s Lake District home, Dove Cottage, where he wrote some of his most nature-inspired works. We were rarely out of sight of a lake or one of the fells. Wildflowers, singing birds, and sheep entertained us along our way as we walked the fairly easy, well-worn path.

Arriving in Grasmere we took some time to explore the village, including St Oswalds Church where Wordsworth and his family are buried. As it was about lunchtime, we stopped at a small sandwich shop and ordered sandwiches for a picnic on the green. Fortunately, our bus stop was nearby for us to catch the bus to Bowness-on-Windermere to take a boat back to the lake port near Ambleside. 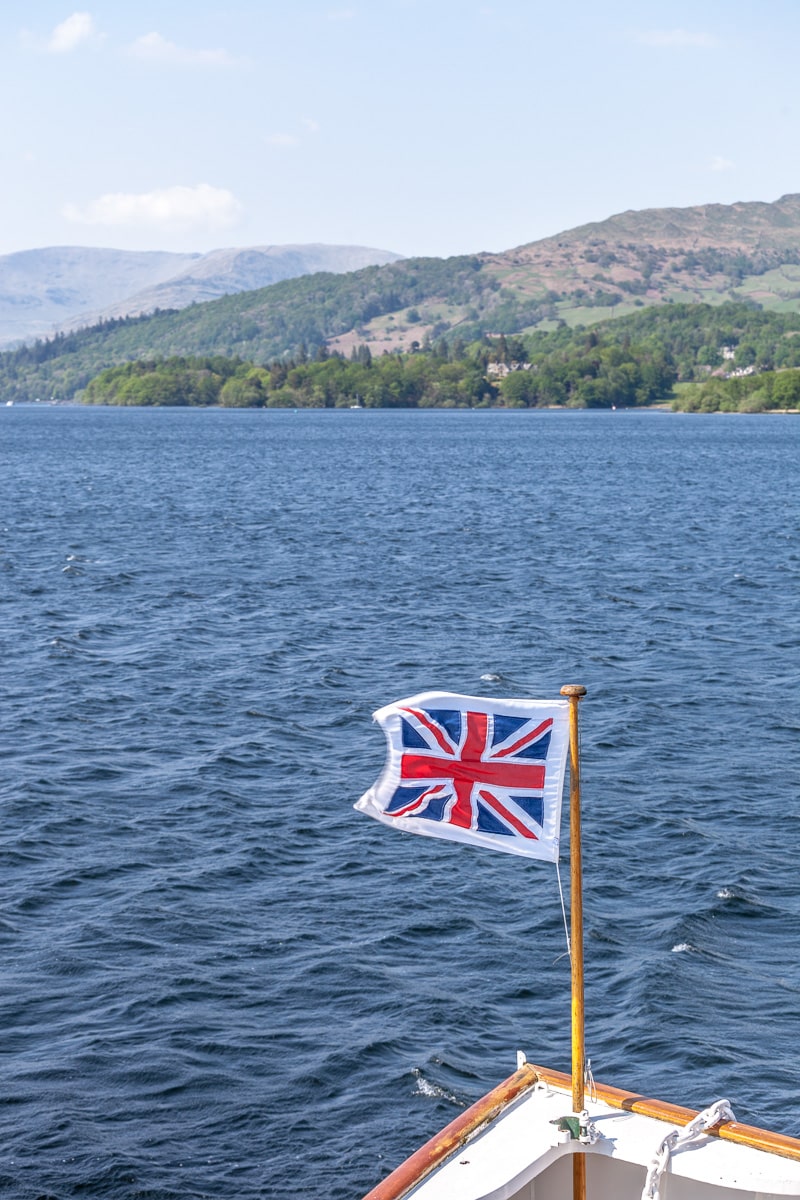 After arriving at Waterhead Pier, near Ambleside, we were just a 20 minute walk back to our B&B. Since it was still a bit early for dinner, we strolled about the town, stopped into a pub for a beer and a wine before going to dinner.

Not waking with the sunrise, since it was bright by 4:30, we waited until breakfast was served to get moving. The proper English breakfast would hold us for the better part of the day, and we planned our next walk to the Stockghyll Force (waterfalls) in the Blue Hill Wood. It was a local walk, and not too far though mostly uphill. The weather cooperated and the sun painted its flecks all over the water, rocks and bright green, spring growth.

The plan was to check out of the B&B before the walk, and to head out on our Egg Hunt on our way back home in Waddington. 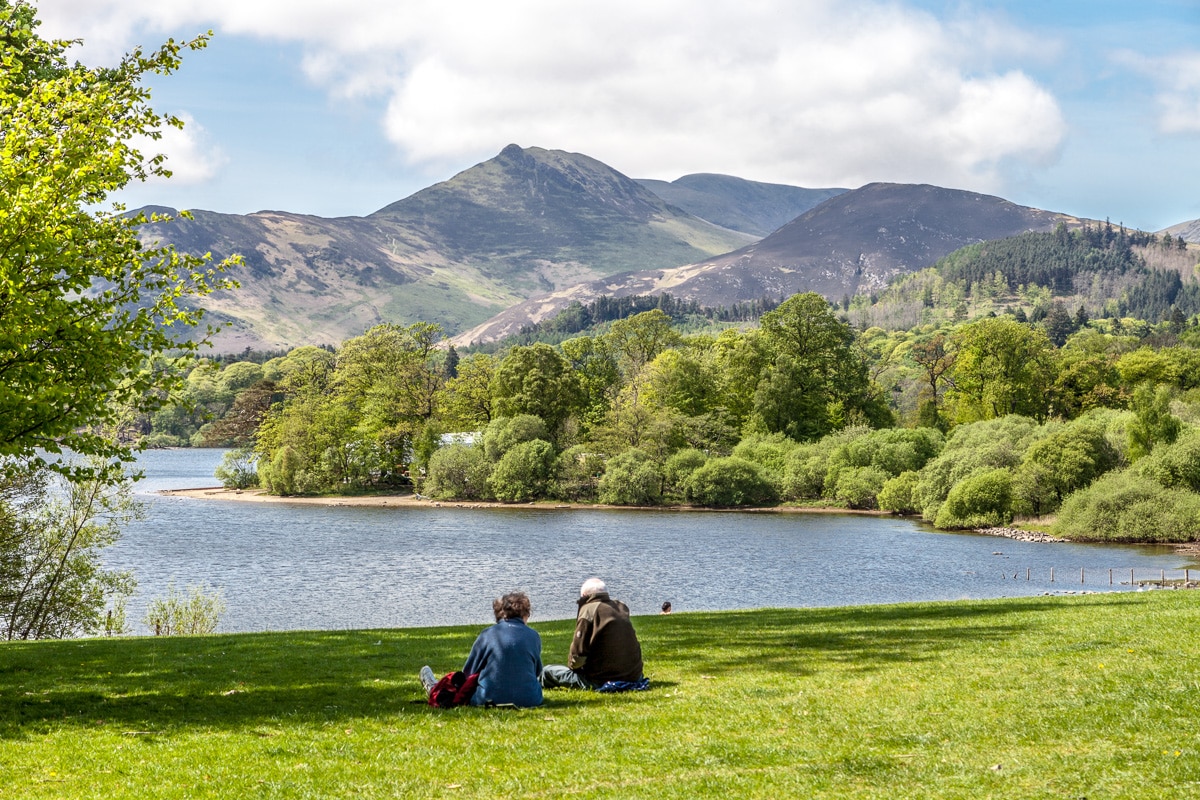 First heading north to Keswick, we took a break to wander this charming village. The annual jazz festival was going on and there were people everywhere. We strolled for a while but needed to be on our way. However, there was another special place we wanted to see nearby, the Castlerigg stone circle. 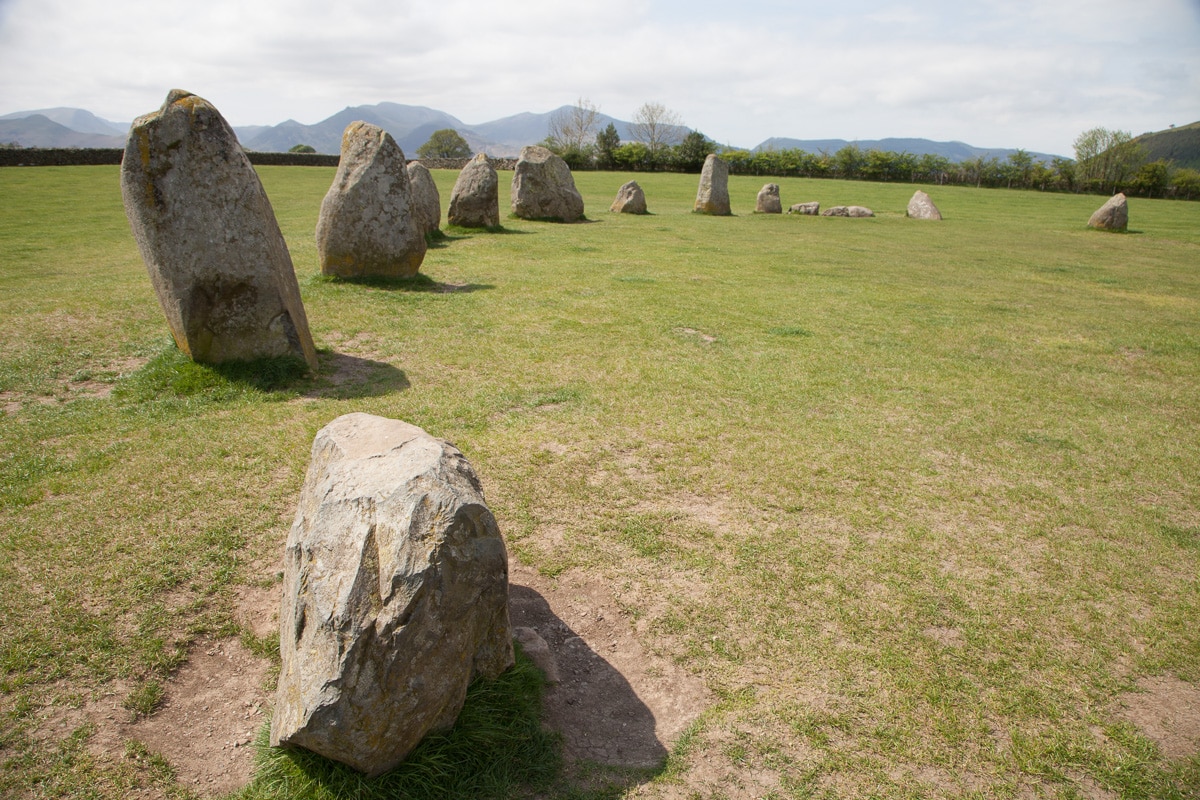 Erected in about 3000 BC during the Neolithic period, Castlerigg circle is set in a most dramatic setting with panoramic views and mountains as a backdrop. Castlerigg is about 30 m (97 1/2 ft) in  diameter, and formerly comprised forty-two stones; there are now only thirty-eight stones, which vary in height from 1 m (3 1/4 ft) to 2.3 m (7 1/2 ft). When we first arrived, there was only one other person there and we had time to appreciate the place, though as we began to leave, several vehicles began to arrive. 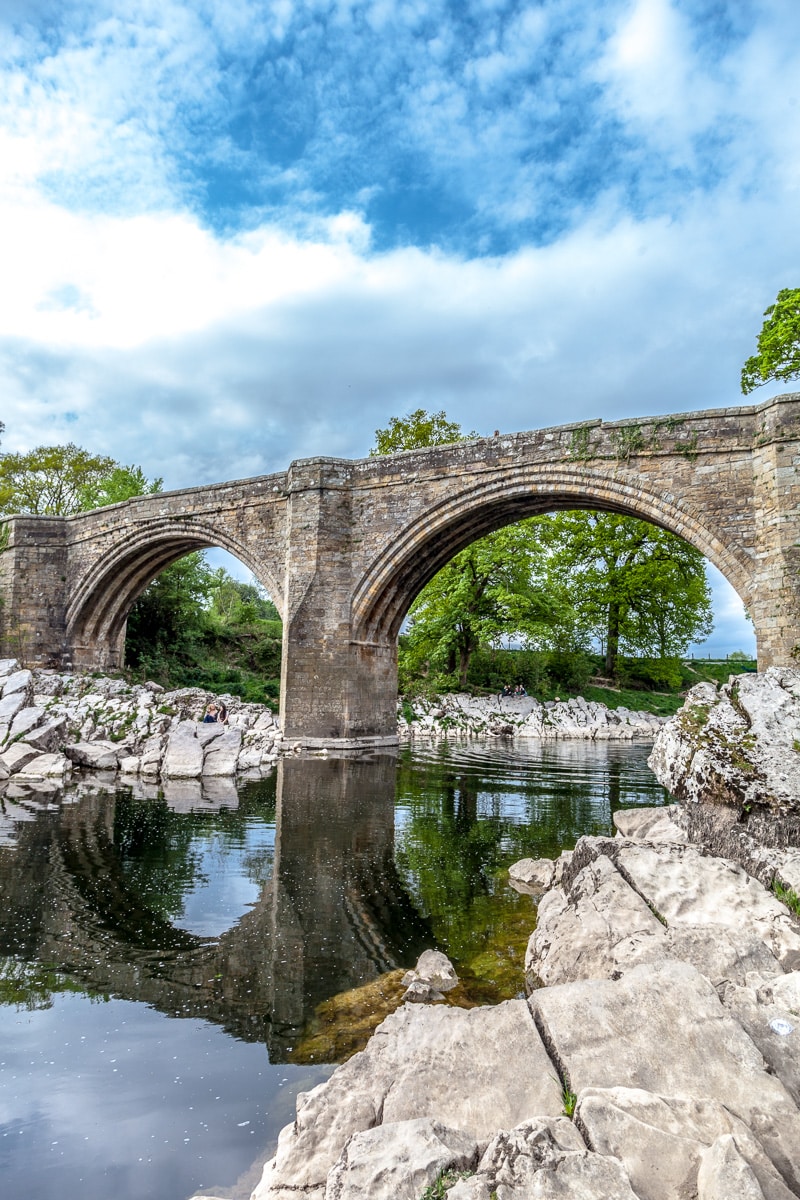 After finding our final Goldsworthy of the trip, we made our way through the center of the Yorkshire Dales National park on narrow country roads with hardly any other cars in either direction. The countryside was stunning as the low afternoon sun bathed the rolling hills and pastures with a beautiful light.

Our final stop was to see the Devil’s Bridge near Kirkby Lonsdale, an ancient structure that dates from around 1370. It was probably built by the monks of St Mary’s Abbey, York. We took our time wandering about before resuming our journey home.

It was good when we finally arrived at our little apartment. The village was quiet, the two pubs we could see, had several patrons sitting out enjoying the early evening, … we were glad to be home.