Together with our new French friends Nicolas and Lucie, we returned to the Fête des Lumières. Though many of the images are repeats, they show different parts of the sequences that we saw. Keep in mind that the images that are projected on the buildings are filled with motion and constantly change during each performance. Some use the architecture as part of the imagery and some merely use it as a screen on which to project. The music and sounds that accompany each performance truly adds to the beauty and magic.

For us this specific evening, something else was equally impressive, … the crowds! I have never seen so many people. From young children, teenagers, college students, parents, and grandparents everyone was in the spirit of the season and the event. It is said that the Fête des Lumières is one of the largest festivals in the world. Third only to Carnival in Rio, Brazil and Oktoberfest in Munich, it draws over 3 million into the city during the 4 nights. Every street was filled with people moving between the 70 venues.

The crowds were thick as we all made our way to each of the venues throughout the city (there were 70). We only made it to a few, mostly being swept along by the throngs of people, though never feeling anxious. 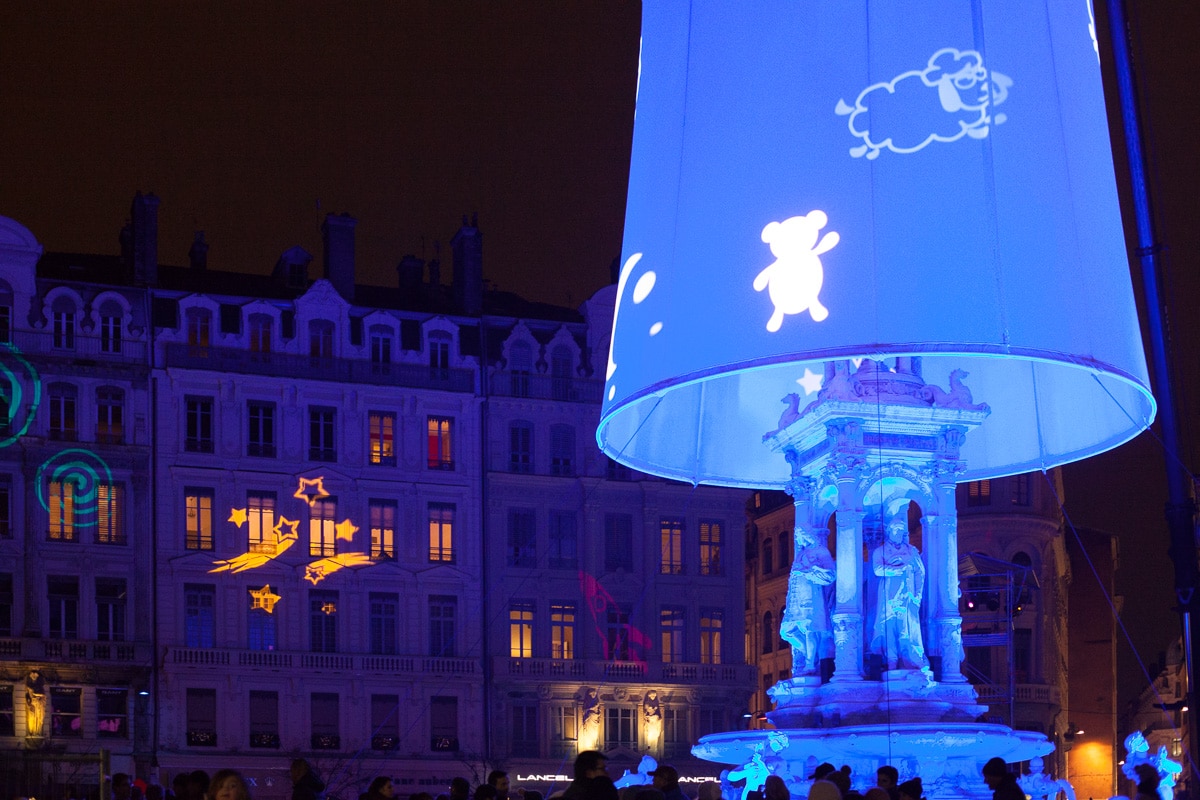 In one big square, the large fountain in the center had been outfitted with what looked like a giant lampshade, and the lights projected onto the buildings surrounding the square were of teddy bears, stars, and other motifs of a child’s bedroom. Standing there with Nicolas and Lucie and thousands of others, the soft blue light playing on the buildings and the gigantic lamp. The entire scene  was accompanied with the sounds of an infant giggling and cooing, along with the music of traditional French lullabies.

It was then that I realized that, as I looked around and listened, almost the entire crowd, children, teens, parents, and grandparents were all singing along quietly to one of the lullabies. It was a magical moment. One that will remain magical long after this adventure ends.

We met again with our new friends and their lovely daughter at their home before we left, but our plans are to return to Lyon in the spring and stay for three months. We are very excited about being back in this wonderful city, especially with friends and such wonderful memories to pave the way.