“We aren’t leaving a place so much as we are going someplace new.” 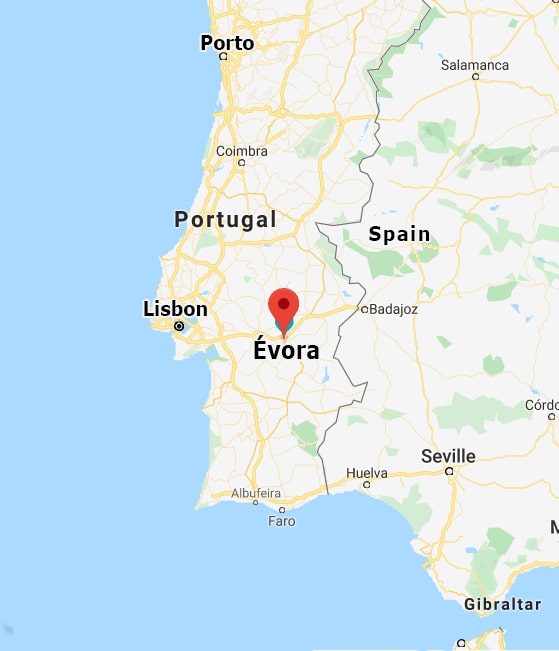 25-30 September 2019 – After seven weeks, it was time to move on from Porto and go to Lisbon. But first, we wanted to get out into the countryside now that it wasn’t so hot. We chose one of Portugal’s best-preserved medieval towns, because of its extensive history and proximity to several Neolithic monuments.

The small town of Évora (pop. ~57,000), situated amid the cork groves of Portugal’s Alentejo region, was once one of the most important provinces of the Roman Empire. It is quickly developing as a popular destination for wine, food, and history lovers. 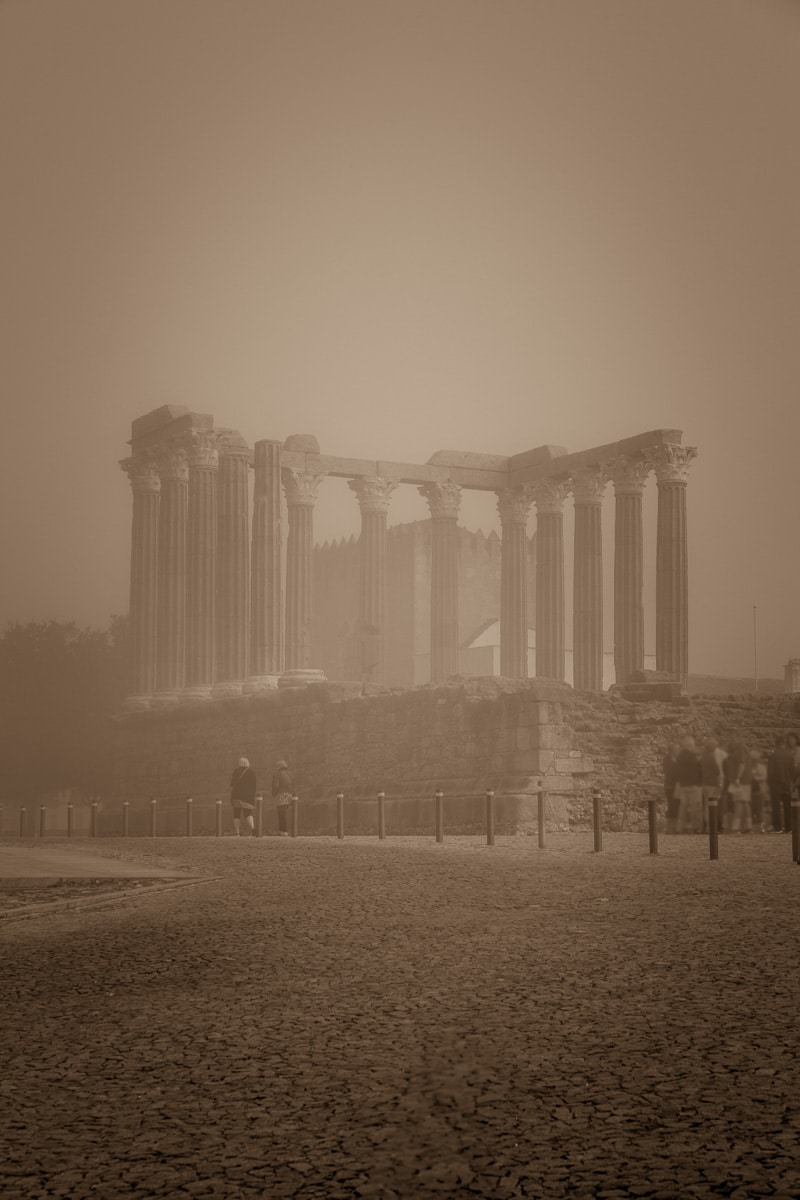 The Romans settled here from the second century BCE to the fourth century CE. The region was a significant source of wheat, a fundamental cereal for the Empire, other Roman staples, and wine. The area was also rich in gold, silver, and copper, and was a very important Roman province in terms of mineral ores. It was so important that Evora was elevated to municipium early in the Roman Pax Romana era. Emperor Julius Caesar himself named it Ebora Liberalitas Julia. Though only remnants of the walls, baths, and beautiful temple remain, the Romans certainly left their mark.

From the eighth to the 12th century, the Moors ruled most of the Iberian Peninsula, including Évora. The square that initially served as the town’s market during the Moorish period, the Praça do Giraldo is named after a Portuguese Christian knight, Giraldo Sem Pavor, who aided the first King of Portugal, Alfonso Henriques, to expel the Moors from the Alentejo. As thanks, Giraldo was made governor of the town and the symbol of the city. The Praça do Giraldo remains to this day a center of commerce and hospitality lined with shops, cafes, and restaurants filled with locals and tourists alike. 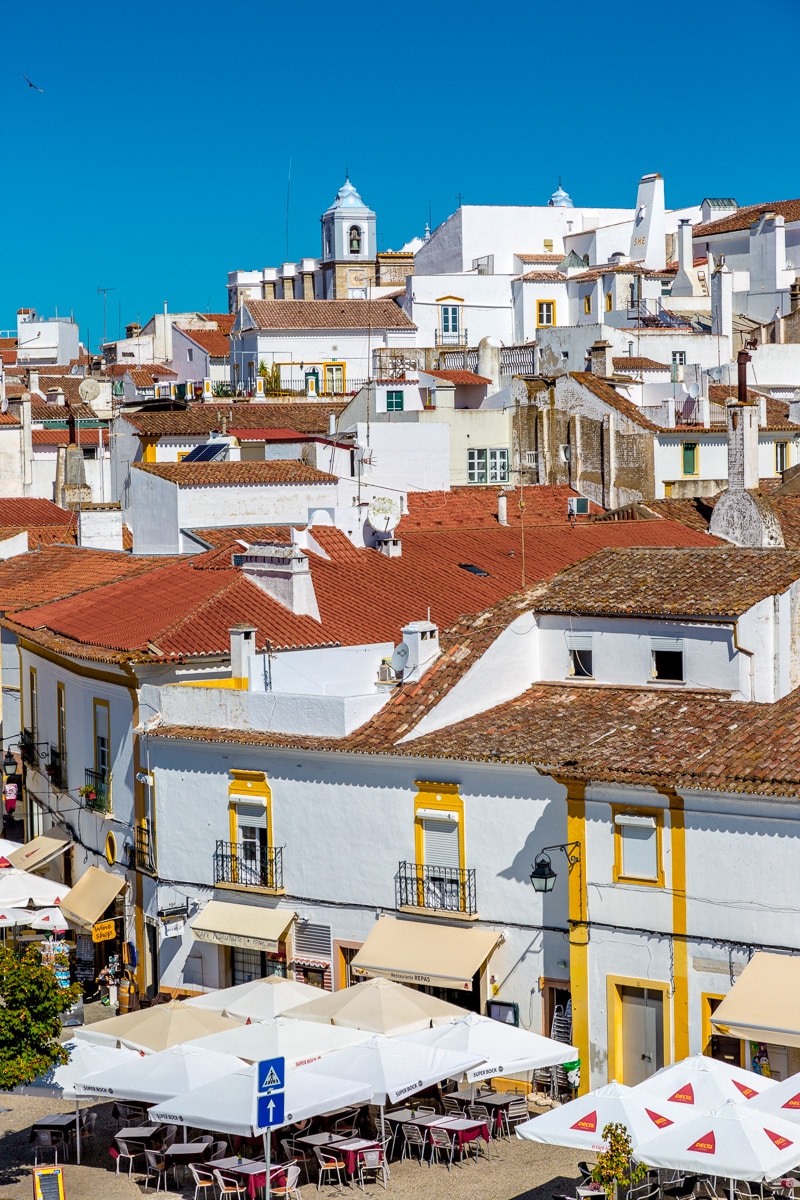 Later, during its Renaissance glory years, Évora became a major trading and religious center, and the city’s golden age came in the 1400s when Portuguese kings chose it for their home.

Évora became a focal point for the infamous 16th century Inquisitions, which condemned tens of thousands of people over a 200 year period. The trials and executions were conducted in public, and the Praça do Giraldo was the location of many rather gruesome episodes.

Inside its 14th-century walls, Évora’s narrow medieval lanes are a treat in themselves. Ideal for wandering, the architecture and cobbled-street layout is preserved by law and lined with whitewashed houses trimmed with yellow (believed to repel evil spirits), and red tile roofs. Many of the houses date from between the 16th and 18th centuries. 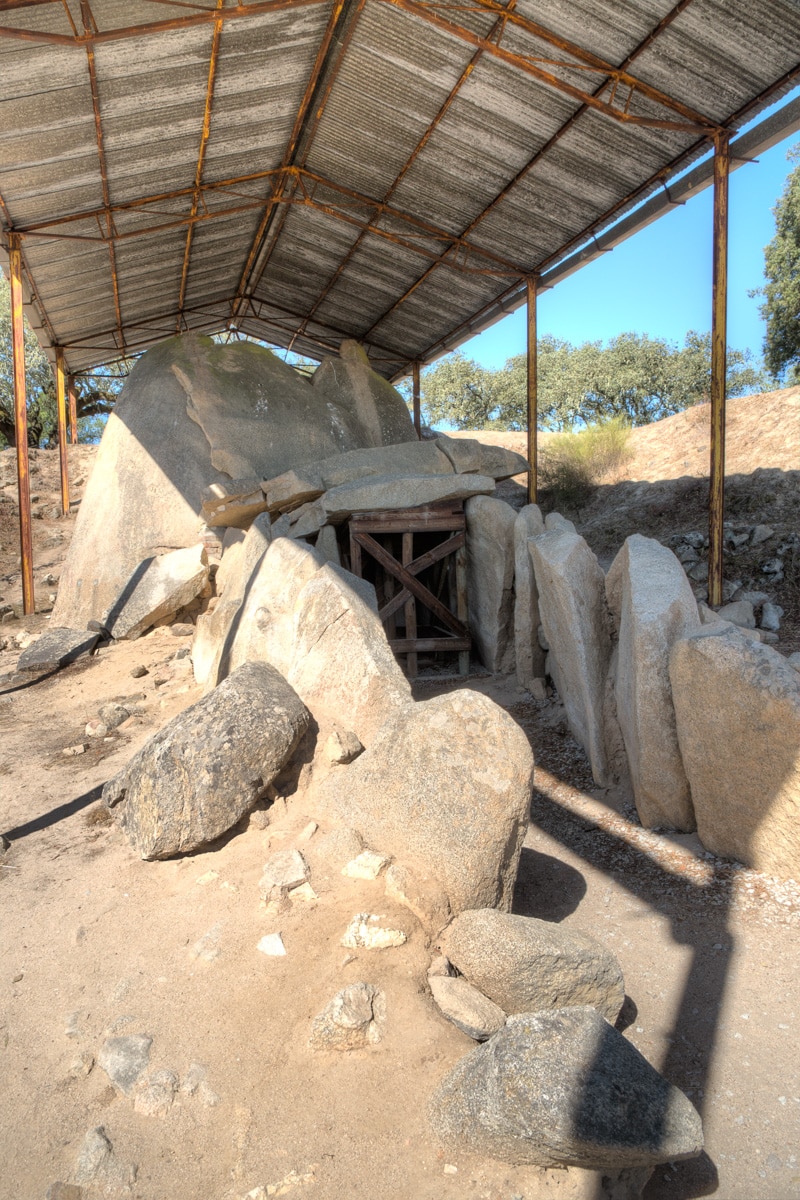 Out in the Alentejan countryside, the remarkable Neolithic monuments at Almendres and Zambujeir show that there existed some form of civilization in the area long before the Romans. Today, however, Évora has a modern, lively and youthful side with a large student population that attends the second oldest university in the country.

Experiencing the monuments and sights of Évora was one thing, but we also tried our best to savor the region’s distinct wines and their simple, but hearty fare. Alentejan cuisine built on plumas de porco preto (pork cutlets) or secretos (pork shoulder) or slices of presunto (jamon or prosciutto) with fresh-baked bread, olives, wild mushrooms, and olive oil, and liberally seasoned with garlic, coriander, and other herbs. We tried excellent cheeses, and pastries, and did I mention the exceptional wines?

Some of Évora’s main sights we were able to visit during our stay: 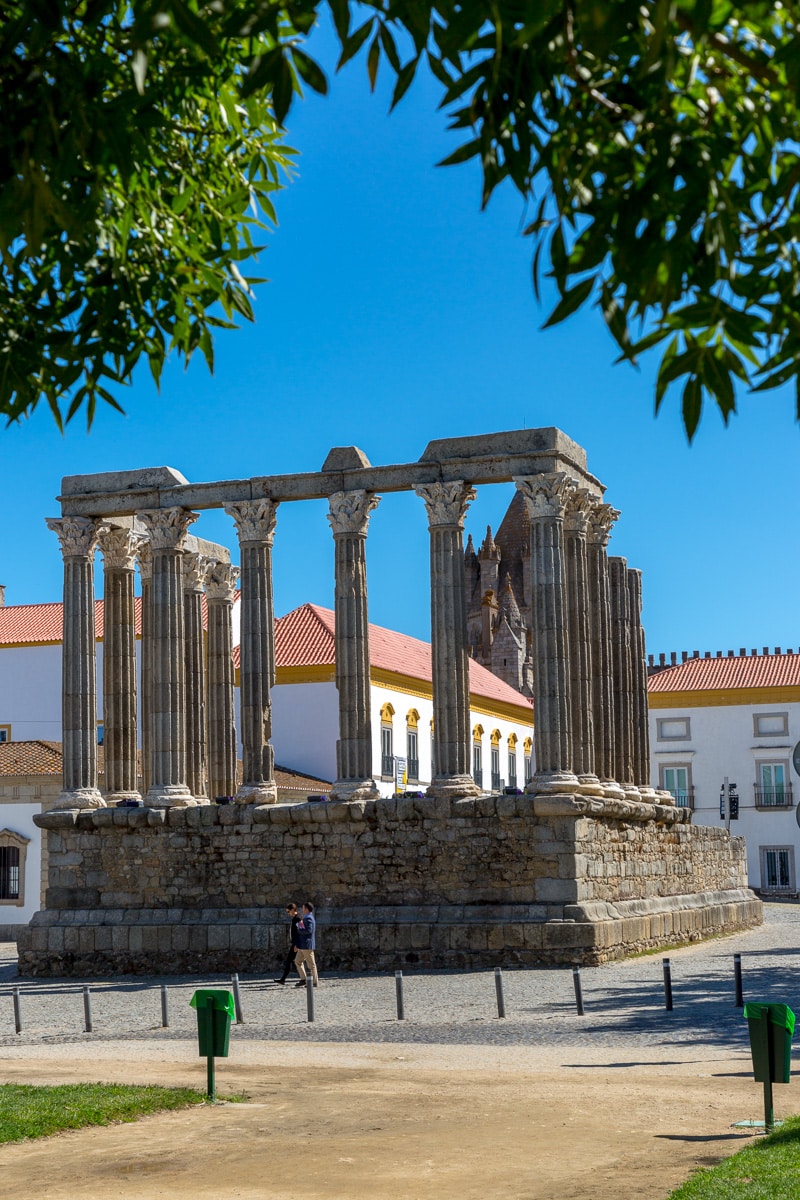 Templo Romano Évora – A Roman temple built in the 1st century and thought to be dedicated to Diana, though no supporting archeological evidence has been found to support that belief. 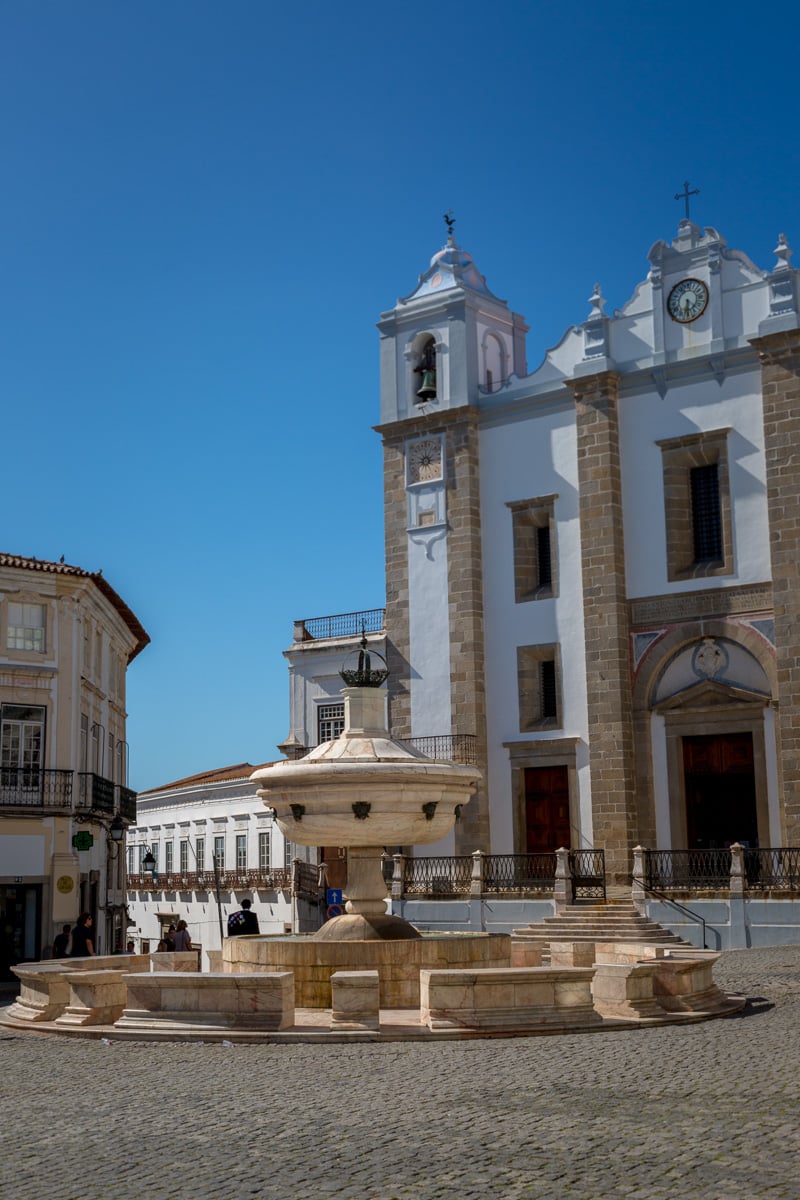 Praça do Giraldo – Within its walls the city is compact. The main square, Praça do Giraldo, lies pretty much at the center, and all of the main sights cluster within a five-minute walk. The square has been a center of commerce since the 12th century, except when it was the scene of the region’s most violent historical events – the Spanish Inquisition court IN THE 1500S. Here also is the Chafariz da Praça do Giraldo, a 16th-century Baroque marble fountain.

Igreja de S. Antão – Church of Saint Anthony was built on the Praça do Giraldo in the 16th century in the Manueline-style in accordance with the designs of the royal architects. 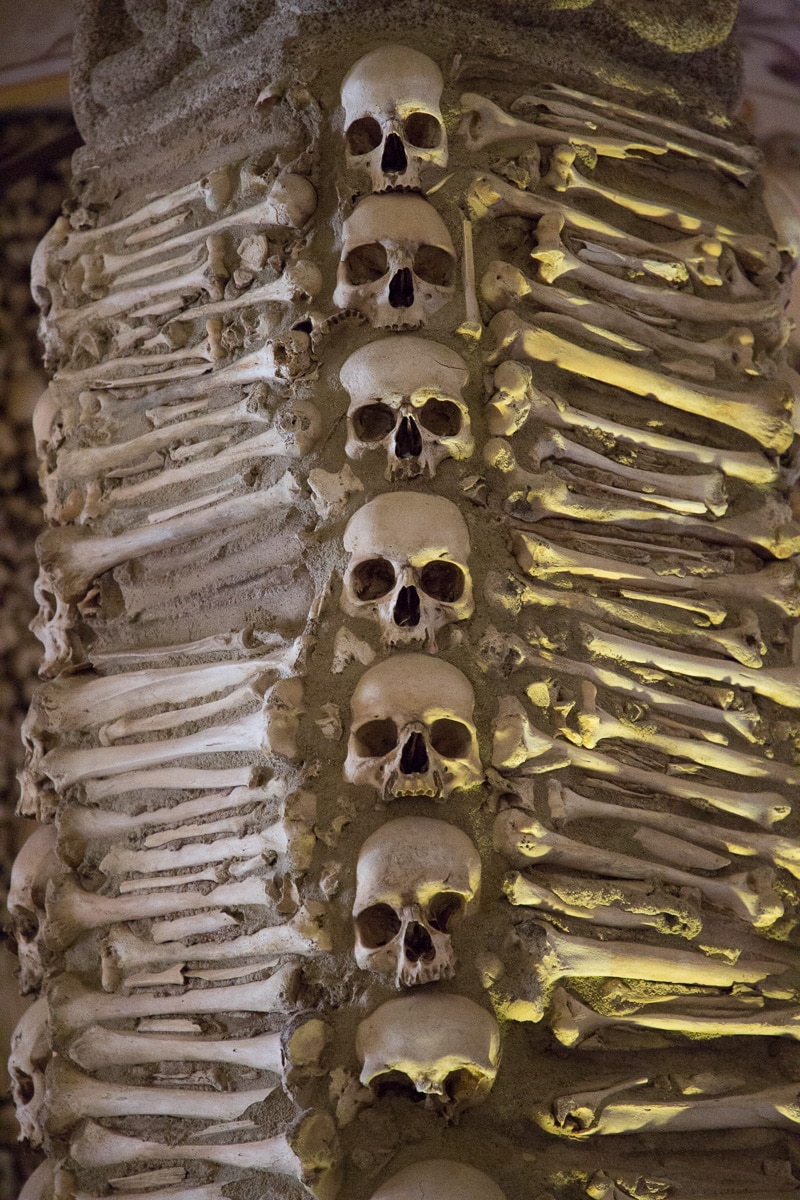 Igreja de São Francisco – Not far away, Church of Saint Francis was built in the Manueline style as a place of worship for royalty in the first decades of the 1500s, and is the largest church interior of this kind in Portugal. Attached to the Igreja de São Francisco is the macabre Capela dos Ossos or Chapel of the Bones, a chapel lined with bones and skulls of several thousand monks, retrieved from crypts and cemeteries in the 16th century. The labor of three monks concerned about society’s values, they thought the chapel would provide a place to think about the impermanence of material things in the unquestionable presence of death. The message above the chapel door reads, “We bones, that are here, for yours await” 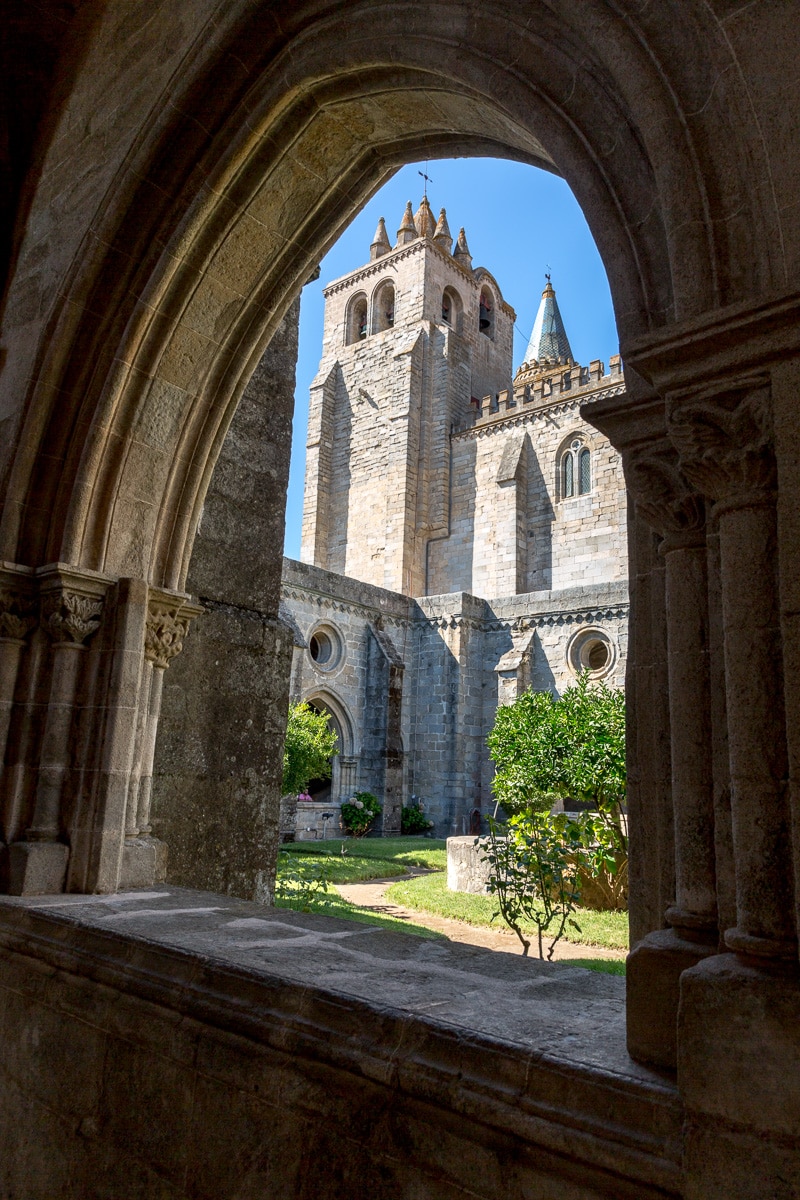 Catedral de Évora – is the largest cathedral in Portugal, dating from the beginning of the 13th century. it has a mixture of architectural styles: from the Romanesque to its huge Gothic nave, Manueline choir and vaulting, with Renaissance and Baroque additions introduced later.

A fortified church, Évora Cathedral is the largest cathedral in Portugal and was initiated in 1186 and completed in 1250. With many additions and changes over the years, it is a monument that showcases the transition from the Romanesque to the Gothic style, and later to the Renaissance and Baroque. 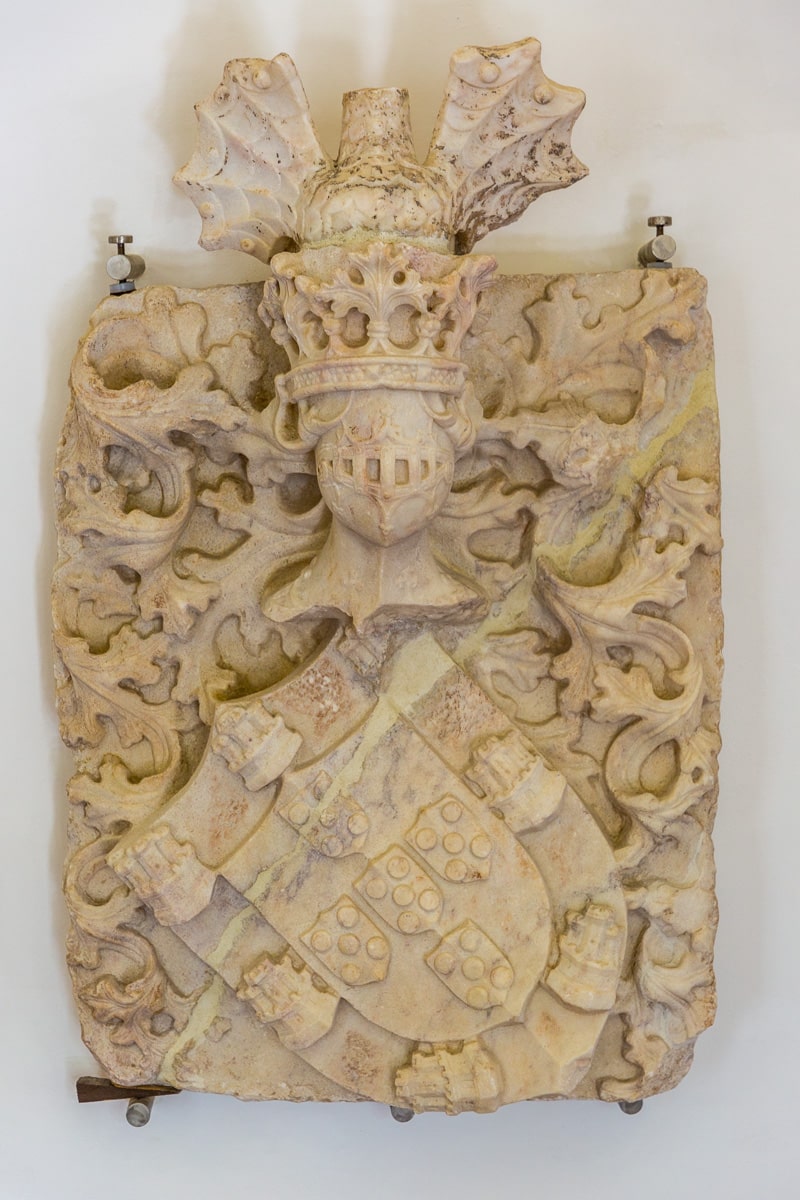 Museu de Évora – built on the site of the Roman forum and housed in what used to be the archbishop’s palace built in the 1500s, this elegant museum has some 20,000 items relating to Évora’s history.

Palácio da Inquisição – In 1536 the first Inquisition was convened in the city of Évora in this building. In 2013 a new purpose was given to the Inquisition Palace, which today functions as an Art and Culture Center.

Évora’s Walls  – The massive, crenelated walls, towers, and gates that embrace Évora are from the reign of King Afonso IV in the 1400s, but their origins and course go back to the 3rd century. 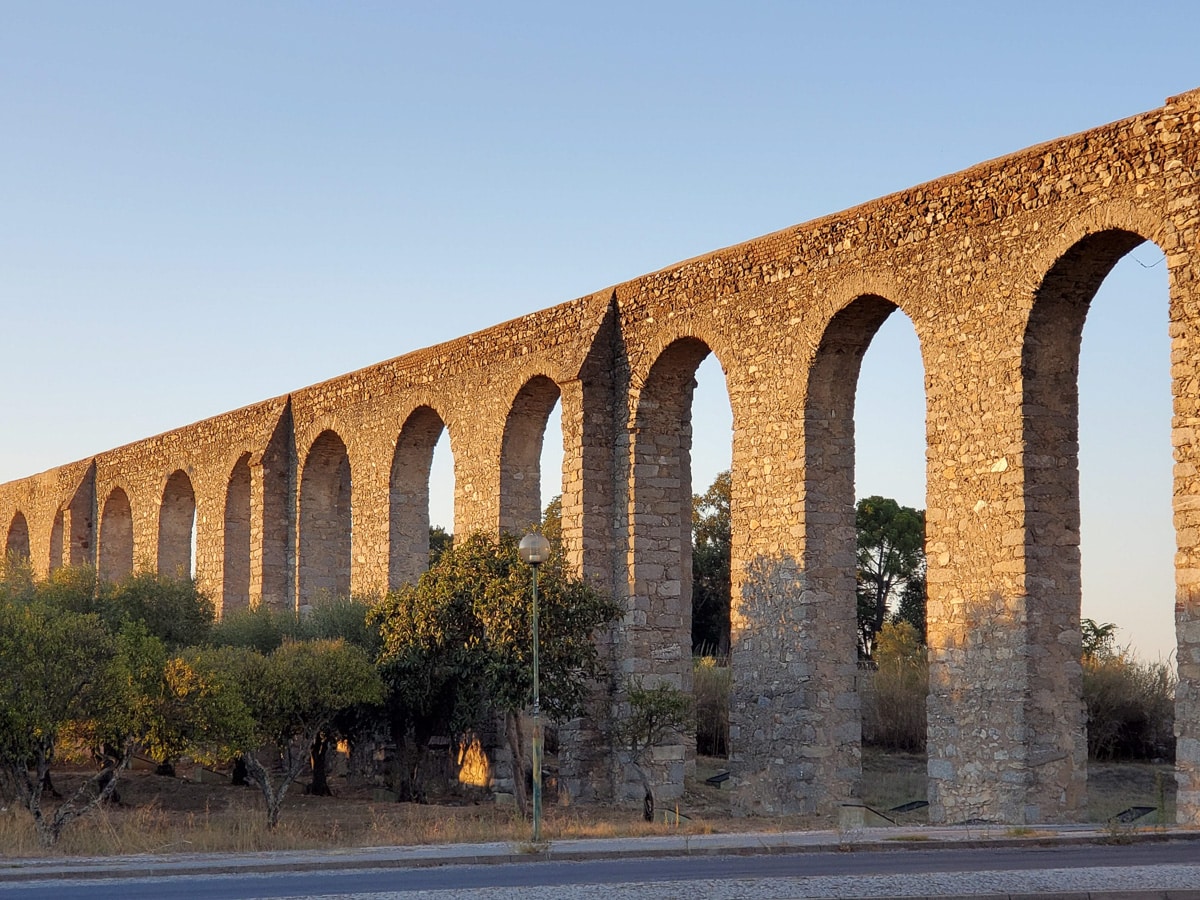 Água de Prata Aqueduct – One of the more impressive sights in Évora is its 16th-century aqueduct that channeled water to the city from almost 20 kilometers away. This Renaissance structure follows the same course as a Roman aqueduct and incorporates some of its original stonework. 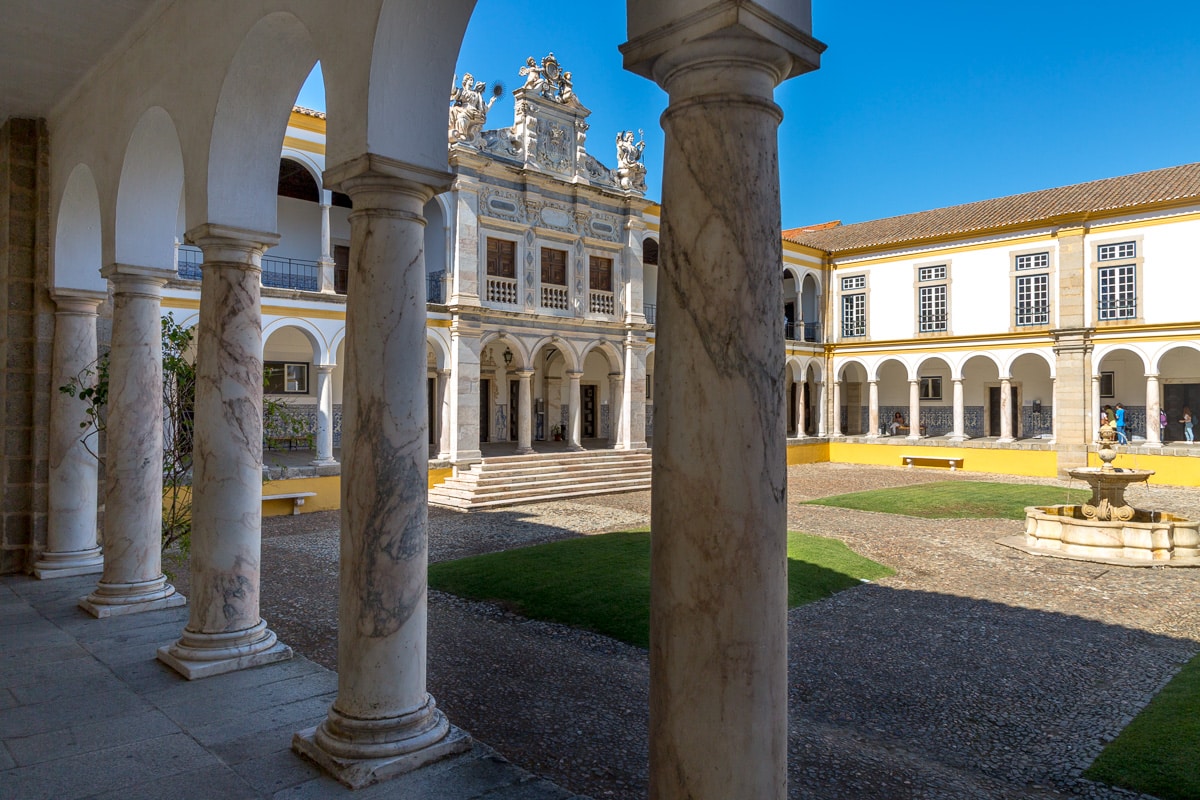 Universidade de Évora – Portugal’s second-oldest university is in Évora, and was founded in the 1500s. The classrooms are decorated with appropriate azulejos such as “Plato teaching his followers” and “Aristotle teaching Alexander the Great”. When we visited, classes were in session and we were unable to visit most of the classrooms. 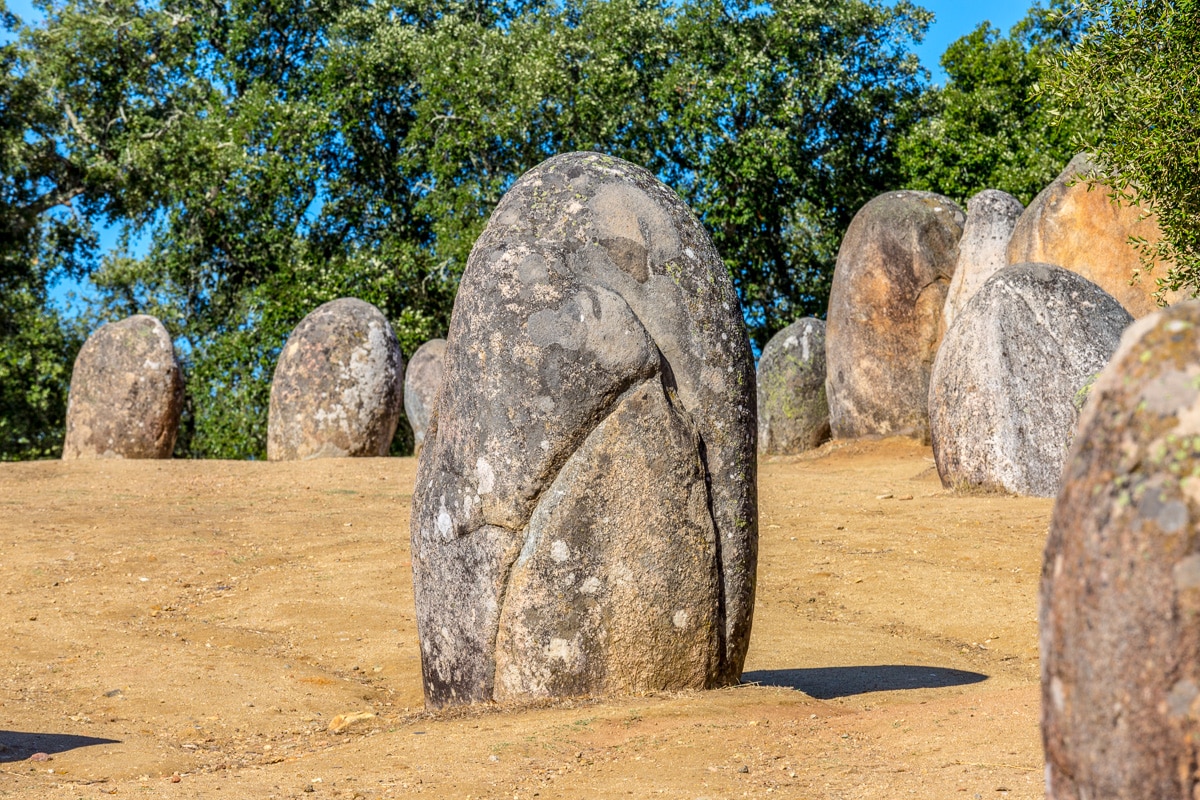 Almendres Cromlech – Just west of Évora is this Neolithic site, dates back 8,000 years. It’s the largest arrangement of menhirs in Iberia, and among the largest on the entire continent. There are 95 standing stones in all, forming two huge circles, and it lay hidden for thousands of years until it was excavated in the 1960s. 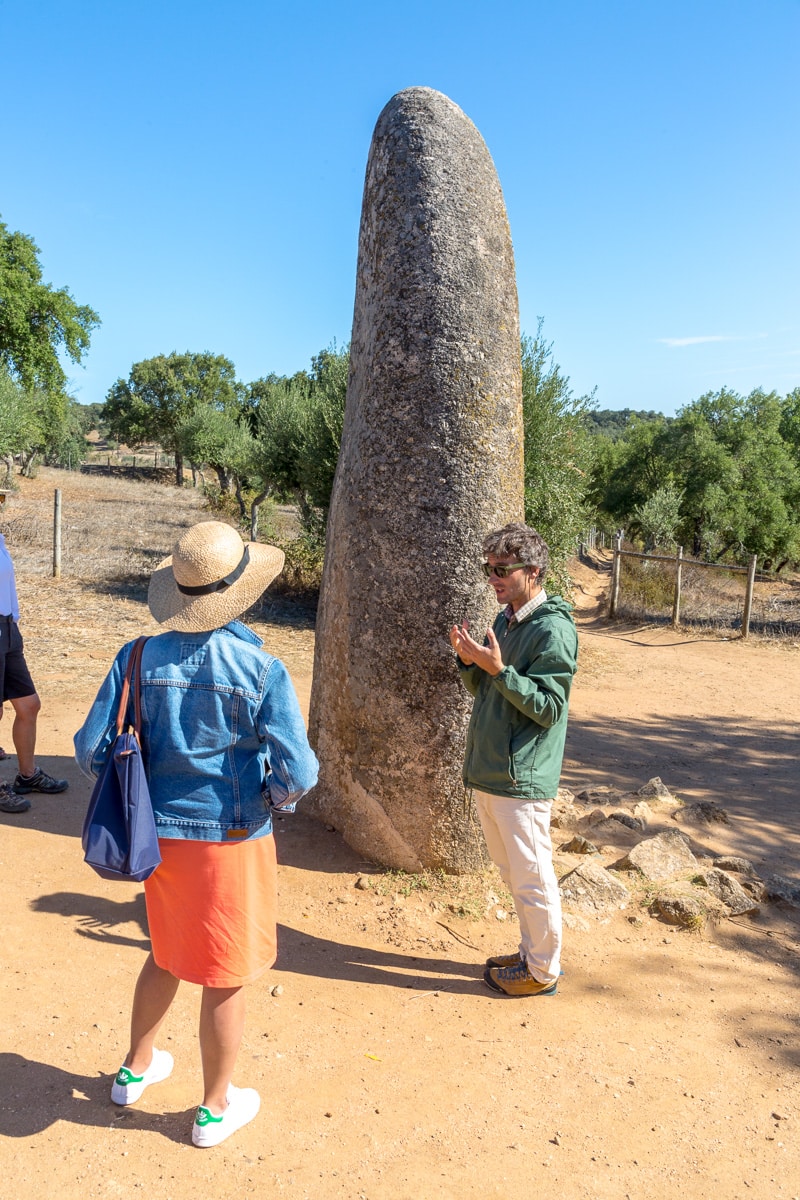 Menir dos Almendres – A single standing stone near Évora in Portugal dating from 5000-4000 BCE. Standing about 4 m (13 ft) high, it has some faint markings near the top, and is aligned with the Almendres Cromlech.

Anta Grande do Zambujeiro – The Great Dolmen of Zambujeiro dates from c.4000-3500 BCE and is the largest dolmen in Europe. Its seven 6 m (19.6 ft) high stones and a ‘closing slab’ connects the 5 m (16.4 ft) diameter chamber with its corridor.

Évora had many more places and things to explore. And while most visitors day trip from Lisbon or spend one or two nights, we had five days and still needed more. Nonetheless, this city was truly a gem.