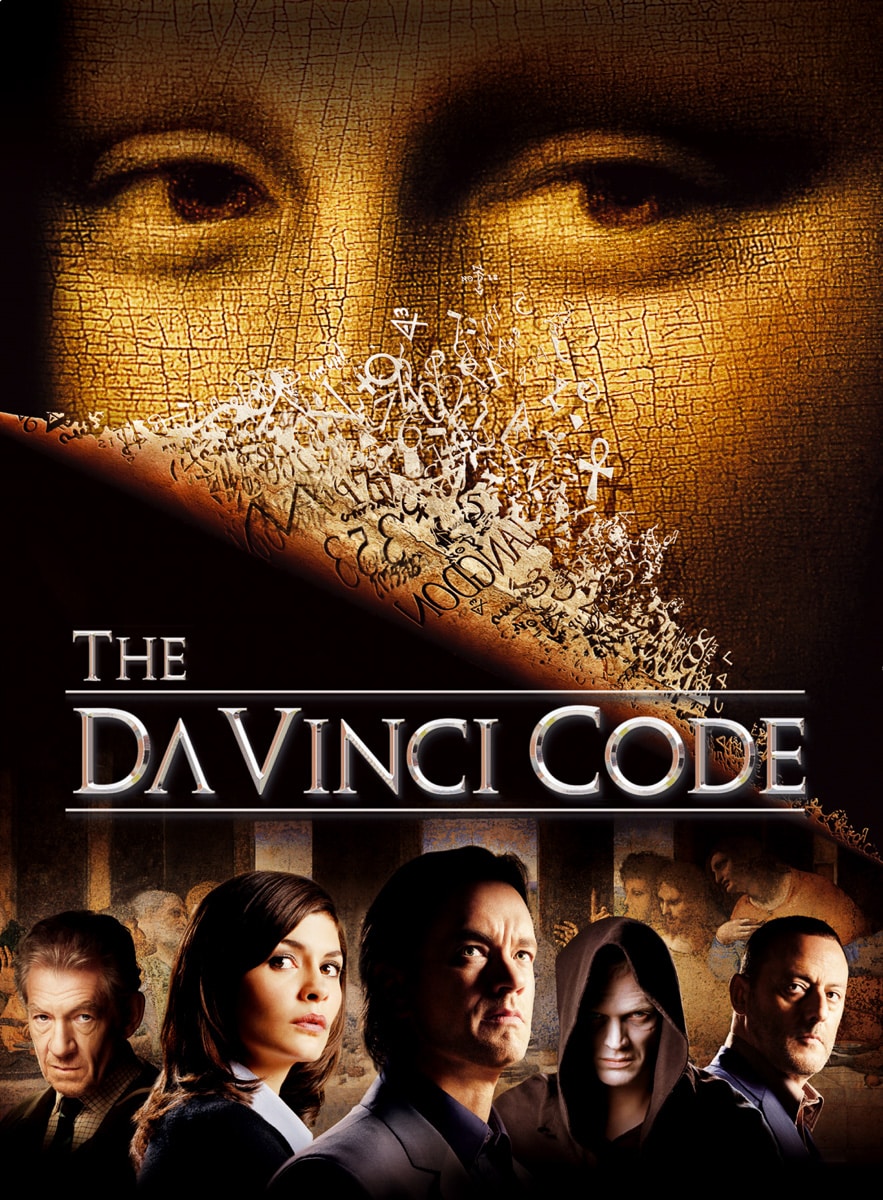 Rosslyn Chapel was featured prominently in The Da Vinci Code, a 2003 novel by Dan Brown and film of the same name starring Tom Hanks and Audrey Tautou. At least that’s how we knew of it. Since we enjoyed the book and the movie, and it was sort of in our neighborhood, we figured we should go see it.

It was an easy bus ride out into the country, just beyond the metro-Edinburgh urban area to the small village of Roslin. Interestingly, the village is well known for more than some pages in a best-selling novel or a few scenes in a popular movie.

The world-famous Roslin Institute is an international center for molecular and quantitative genetics research of farm animals, and poultry science, and is a part of the College of Medicine and Veterinary Medicine of the University of Edinburgh. It was here in 1996 that cutting-edge biological science led to the birth of Dolly the sheep, the first mammal to be cloned from an adult cell. 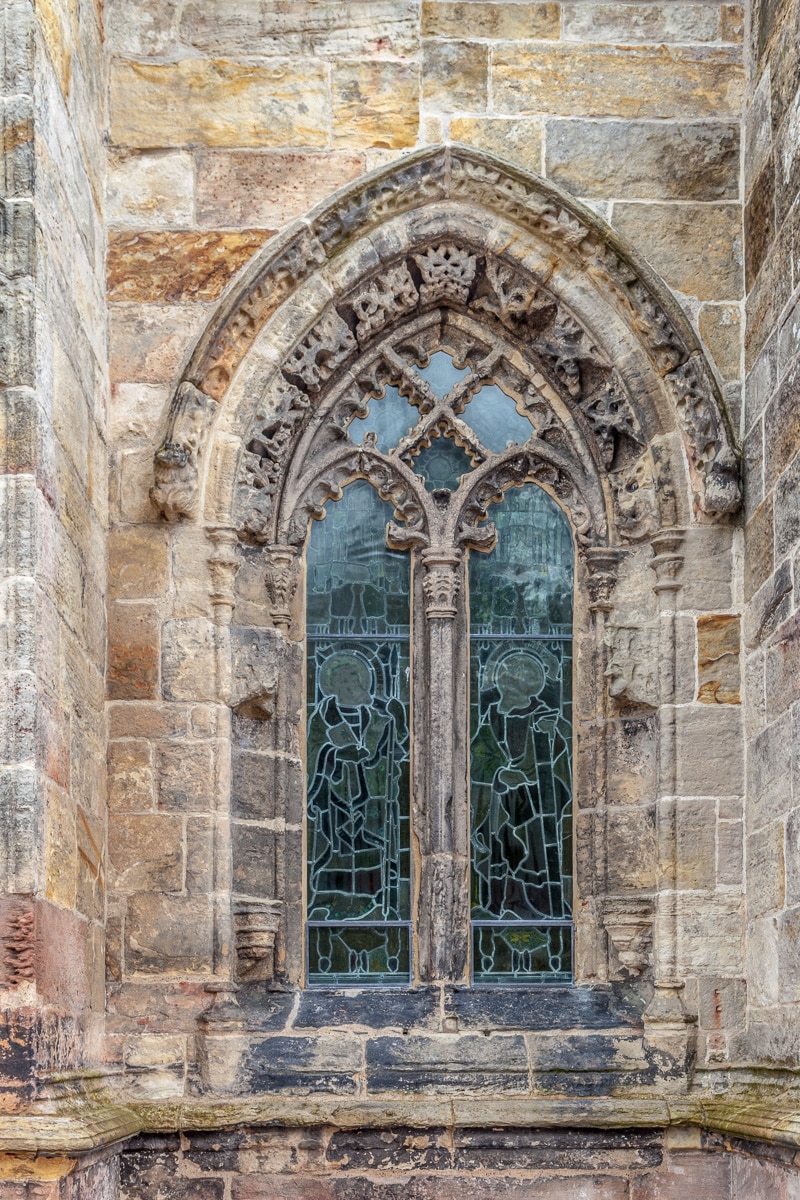 The chapel, on the other hand, has become legendary for maybe being the last resting place of the Holy Grail. But it is only one of many legends that have long surrounded Rosslyn Chapel.

Rosslyn Chapel was founded by William Sinclair, 1st Earl of Caithness on a small hill above Roslin Glen as a Catholic church in 1446. Chapels like this were often built by the wealthy to celebrate Mass for deceased members of their families and others. Its architecture is considered to be among the finest in Scotland, and has long attracted and intrigued visitors, especially writers – from Robert Burns, Sir Walter Scott, and William Wordsworth in the nineteenth century to novelist Dan Brown in the twenty-first.

Originally planned as a large cruciform church with a tower at its center, only the walls of the choir of this church and parts of the east walls of the transepts had been built by 1484 when William Sinclair died, then all work stopped on the remainder of the church. 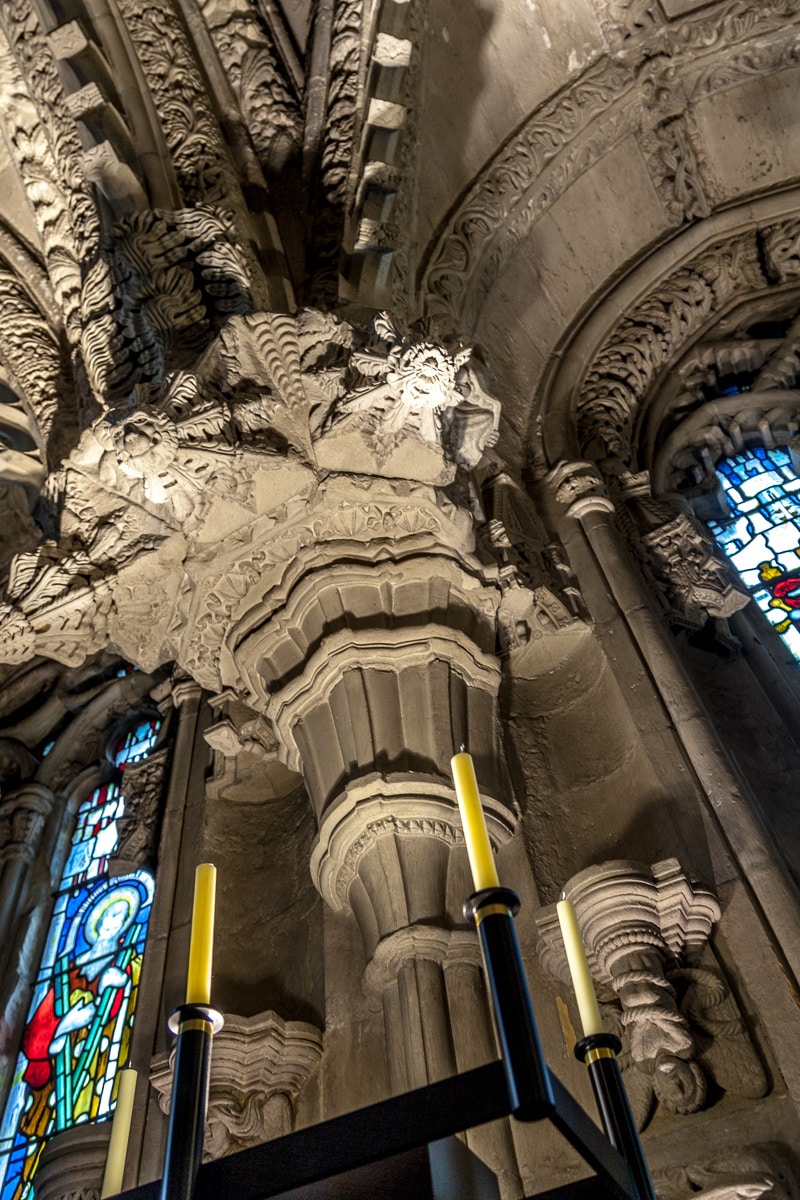 The many revolutions, reformations, and wars of religion saw the chapel neglected and abused. In 1650, Cromwell’s troops used the chapel as stables but left it otherwise unharmed. Restoration of the chapel was begun in 1736 by James St Clair and continued through the 1800s.

Fortunately, the interior of the chapel has survived and has been restored rather well. The beauty and richness of the chiseled stonework is remarkable. There is virtually no surface in any part of the chapel that has not been decorated with delicate and intricate carvings. It draws the eye from every direction, inviting examination and study until something else catches the attention.

It is not only the skilled workmanship that is fascinating. Virtually every stone carving is steeped in legend, lore, and symbolism, including more than 110 carvings of “Green Men” in and around the chapel. Green Men are carvings, sculptures, or other representations of human faces made from or surrounded by leaves, branches, and vines. Green Man is often related to natural vegetative deities and is often interpreted as a symbol of rebirth. 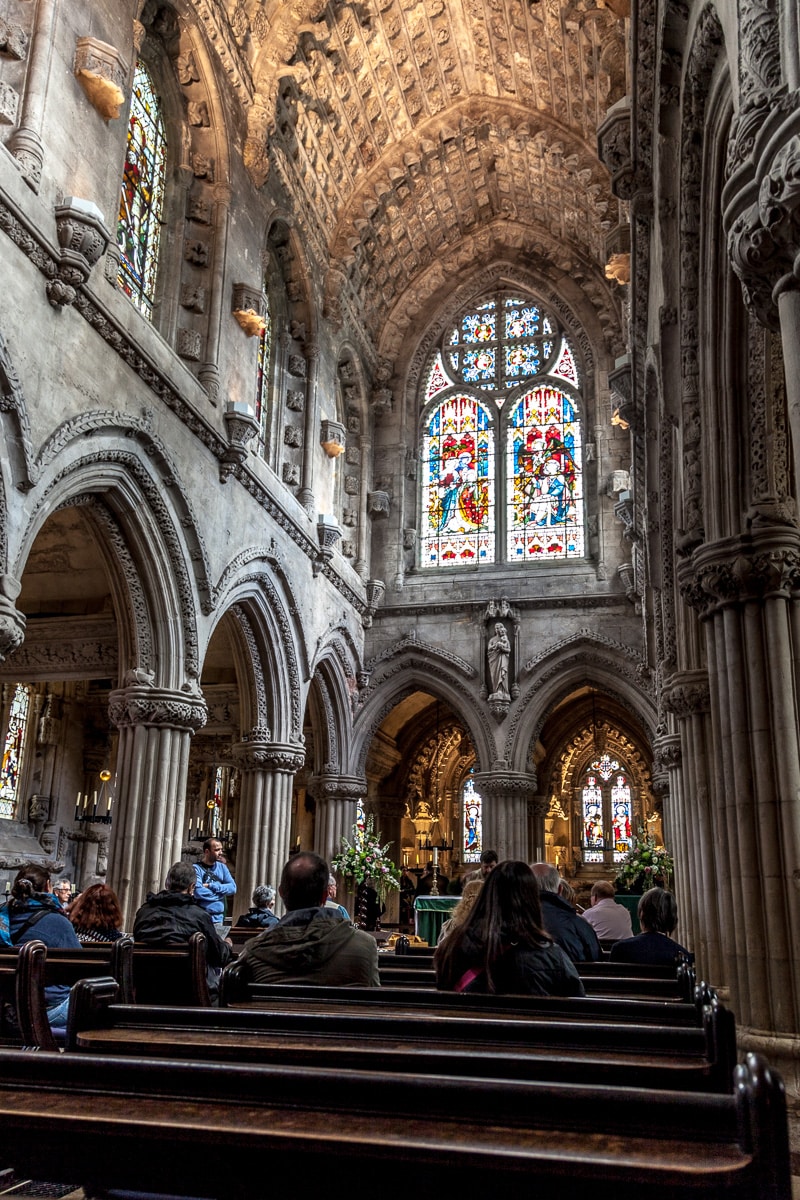 There are many other legends associated with Rosslyn. The remains of ten Barons of Rosslyn in their full armor are said to be buried in sealed vaults below the chapel. And still, others believe that these vaults, or other parts of the chapel, may also contain the Holy Grail, the Ark of the Covenant, or part of the actual cross of Christ. And Rosslyn Chapel’s alleged links with the Knights Templar and the Masonic order are thought by some to explain why Cromwell’s troops spared the chapel in 1650.

Regardless of legends that may or may not be true, Rosslyn Chapel is a beautiful example of the artistry and skill of stone masons in the 15th century. It is simply a place that is, in a word, indescribable. One could take days, weeks or longer and still not see or appreciate the richness of almost every surface. We were glad that Dan Brown’s book and the film made this gem known to us. Yet as always, the real thing was so much better than the movie.