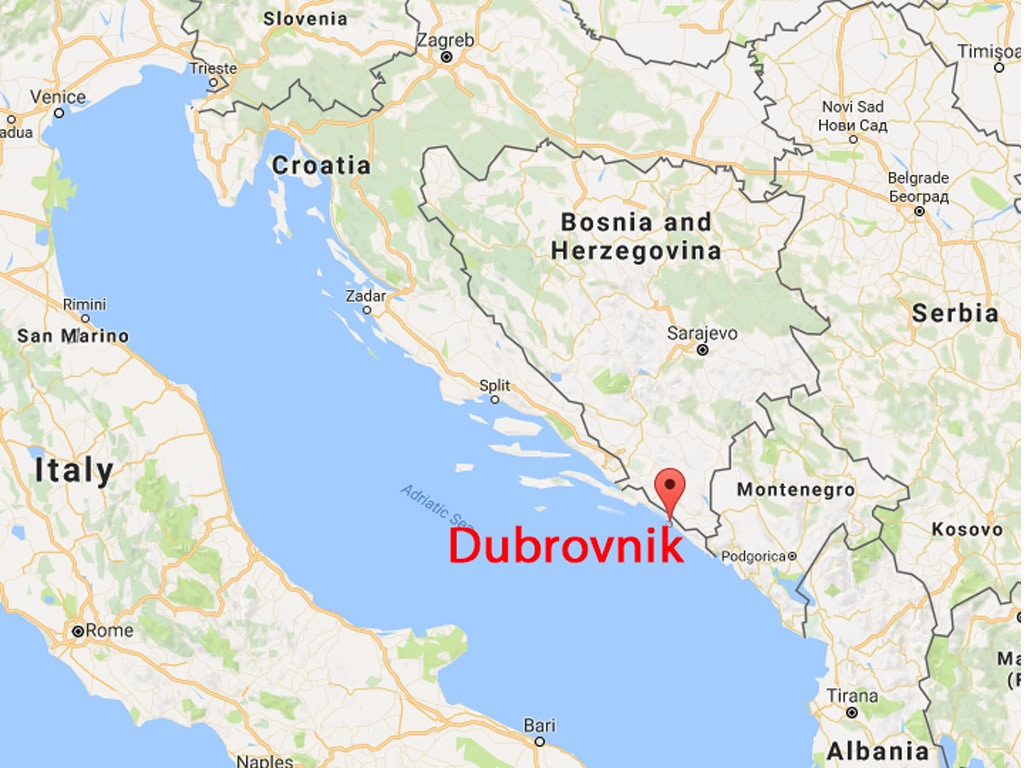 End of June 2018 – Dubrovnik is about as south as you can go and still be in Croatia. The country is narrow here, next to Bosnia and Herzegovina on the western side of the Dinaric Alps that rise dramatically from the Adriatic.

In the morning, the Stella Maris departed Mijet to cruise to Dubrovnik. The day began slightly overcast with a light fog as we made the final run to Dubrovnik. After tying up at the dock, we boarded a bus for a view of the city from the surrounding mountains. 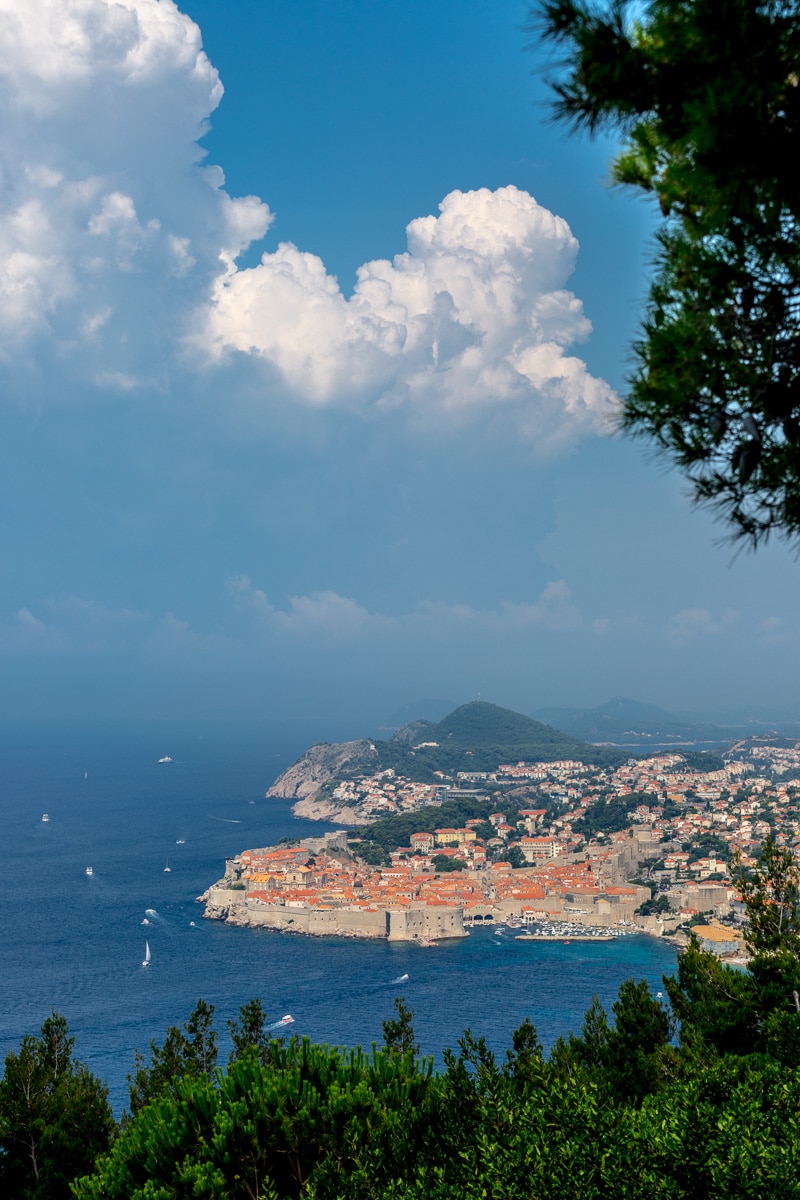 From the distance there was a sense of awe at the sight of the massive stone walls constructed mainly during the 12th–17th centuries. The walls run approximately 1,940 meters (6,360 ft) encircling most of the old city, reaching a maximum height of about 25 meters (82 ft). The red roofs and towers within the ancient walled city stood out against the now-clear sky and rich blue of the Adriatic.

It was a spectacular view and well worth the excursion. We then returned back to town for our final walking tour to see some of the key elements of the city. 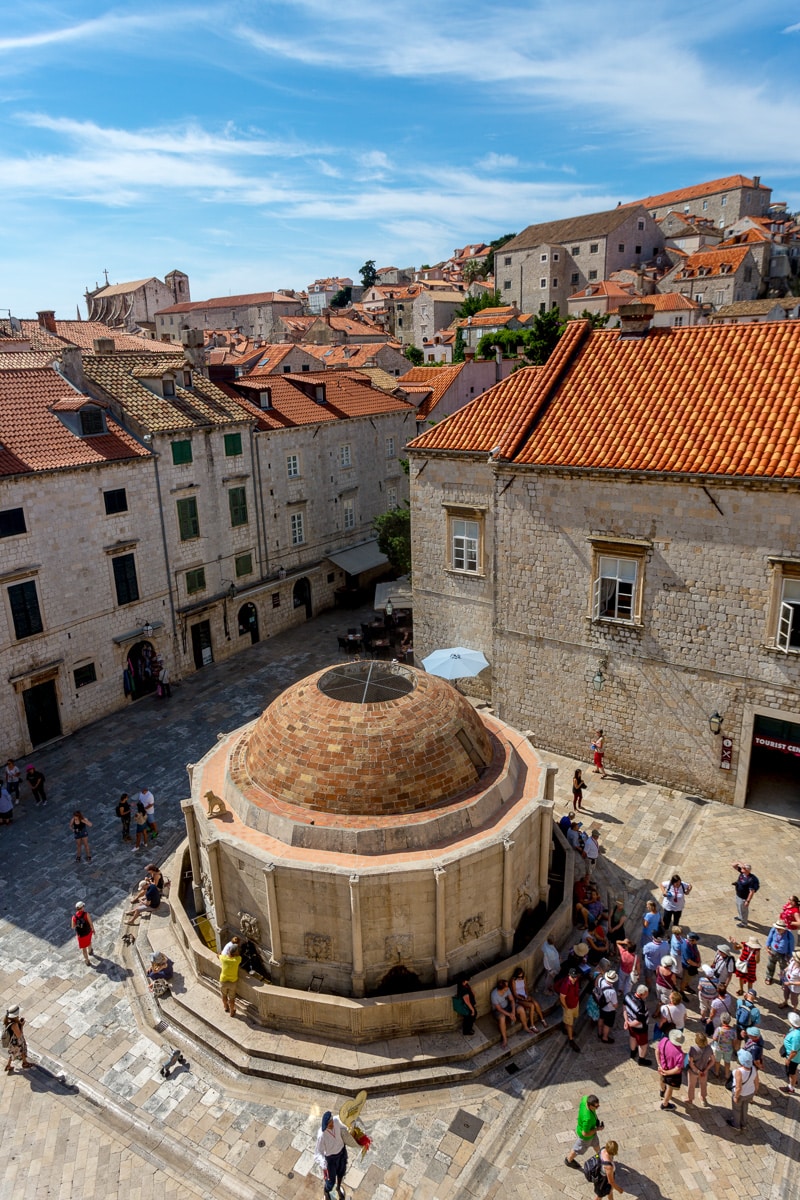 After exiting the bus, we entered the old walled city through the Pile Gate, a well-fortified complex with multiple large arched doors and assembled near Big Onofrio’s Fountain, built in 1438, in the middle of a small square.

After a brief orientation we visited the mid-14th century Franciscan Monastery of Dubrovnik. Construction of the complex was begun in 1317, though its completion took centuries. The cloister of the monastery was built in Romanesque-Gothic style with arches, 120 columns, 12 massive pilasters and a promenade. The capitals on the columns are all different showing various geometric, plant-, human- and animal-like figures. 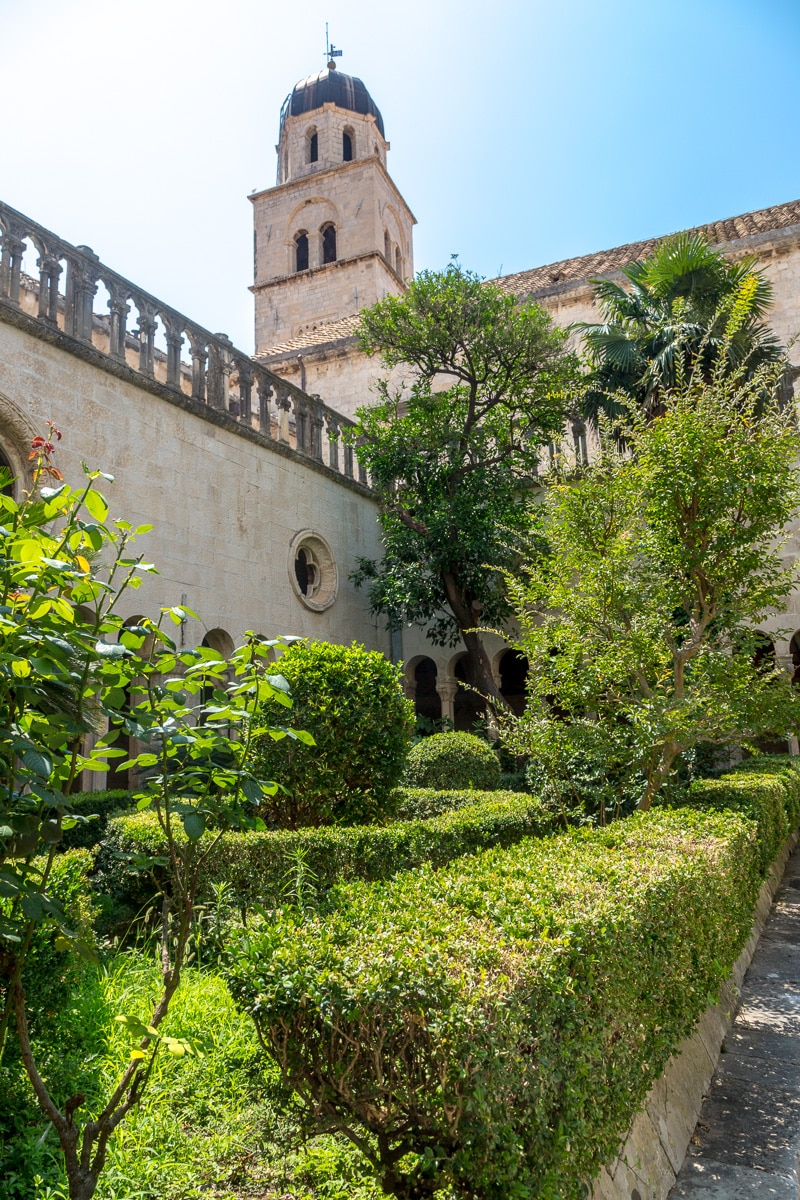 The Monastery also houses an ancient library, and a pharmacy that dates from 1317 and is the third oldest, still-functioning pharmacy in the world.

Emerging from the Monastery onto Stradun, the limestone-paved pedestrian main street in Dubrovnik’s Old Town, we were reabsorbed back into the crowd of tourists. The limestone pavers were as smooth as glass having been polished by centuries of footsteps. Even dry, one could sense the slippery nature of their slick surface as we made our way toward the Church of St Blaise.

Though the church was spared in the earthquake of 1667, a fire in 1706 devastated the medieval church dedicated to the patron saint of the town, St. Blaise. The current structure was rebuilt in the Venetian-Baroque style. 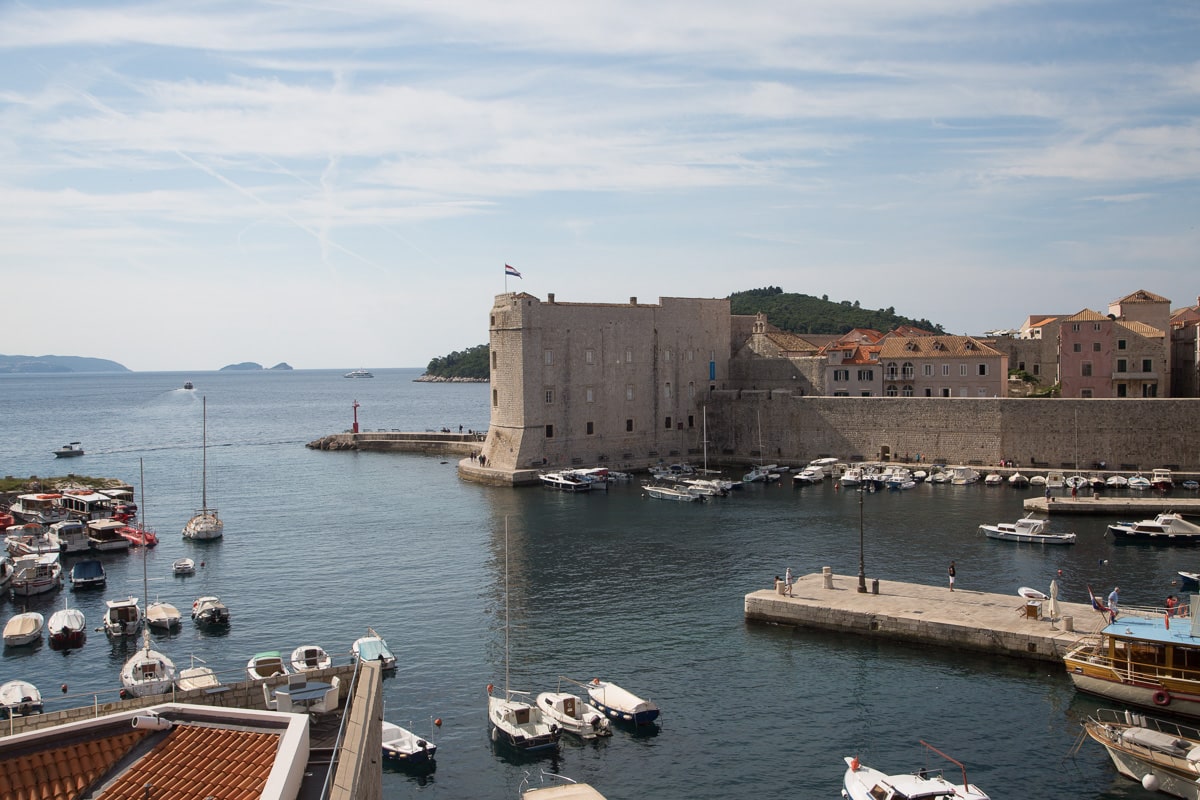 From St Blaise, we threaded the narrow stone streets to the Old Port located at the Eastern edge of the City. Heavily protected, the old port was a center of ship building activity, and at its height, the fleet of Dubrovnik rivaled the fleet of Venice. From 1358 to 1420, Dubrovnik gained still greater autonomy and became one of the most important ports on the Adriatic. 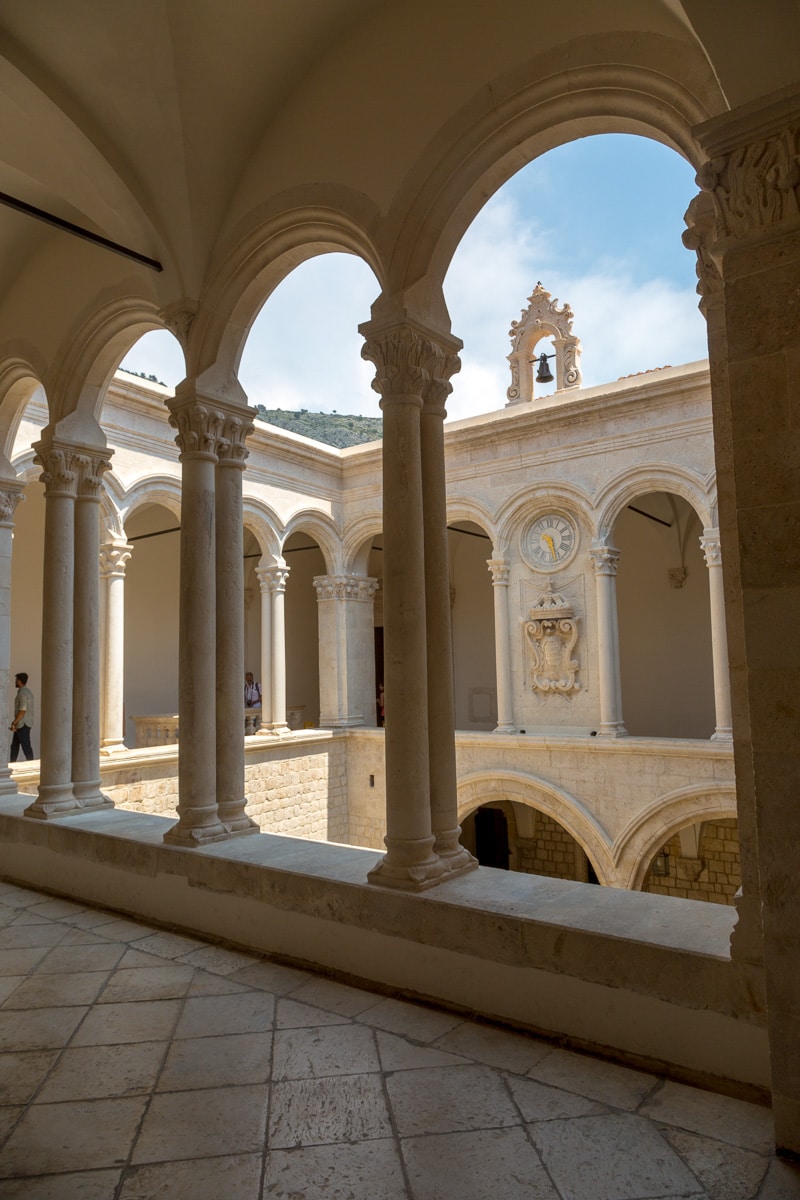 As we reentered the city from the port we were escorted to a well-balanced Gothic and Renaissance Middle Age palace with several Baroque additions – Dubrovnik’s Rector’s Palace. The Senate (the 50-60 citizens who ran Dubrovnik between the mid-14th century to 1808) would meet here and their “leader” was required to live here without leaving the building during his term. The term palatium or palace first occurs in the documents in 1349.

Today the Palace houses the Museum of Dubrovnik. The majority of the halls have styled furniture to recreate the original atmosphere. In addition to period furniture, numerous portraits and coats of arms of the noble families, paintings of old masters, coins minted by the Republic, the original keys of the city gates, and a number of artifacts and documents are on permanent exhibit in the palace. 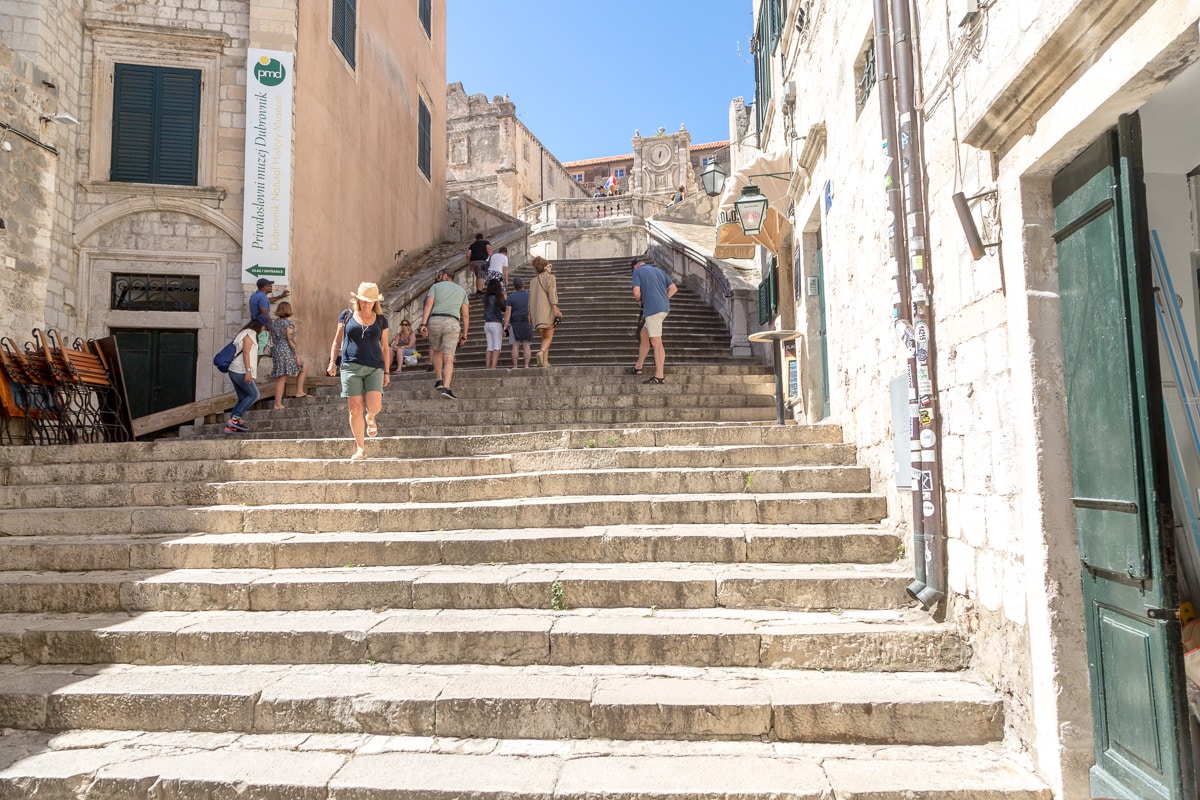 As we began making our way back to the bus for our return to the ship, we passed through the daily market at Gundulićeva Poljana (Gundulić Square), and stopped briefly at the Jesuit Staircase, a graceful set of stone stairs leading up to Crkva sv. Ignacija (Saint Ignatius Church). The stairs were extensively repaired after being damaged in 1991 by Serb shelling. 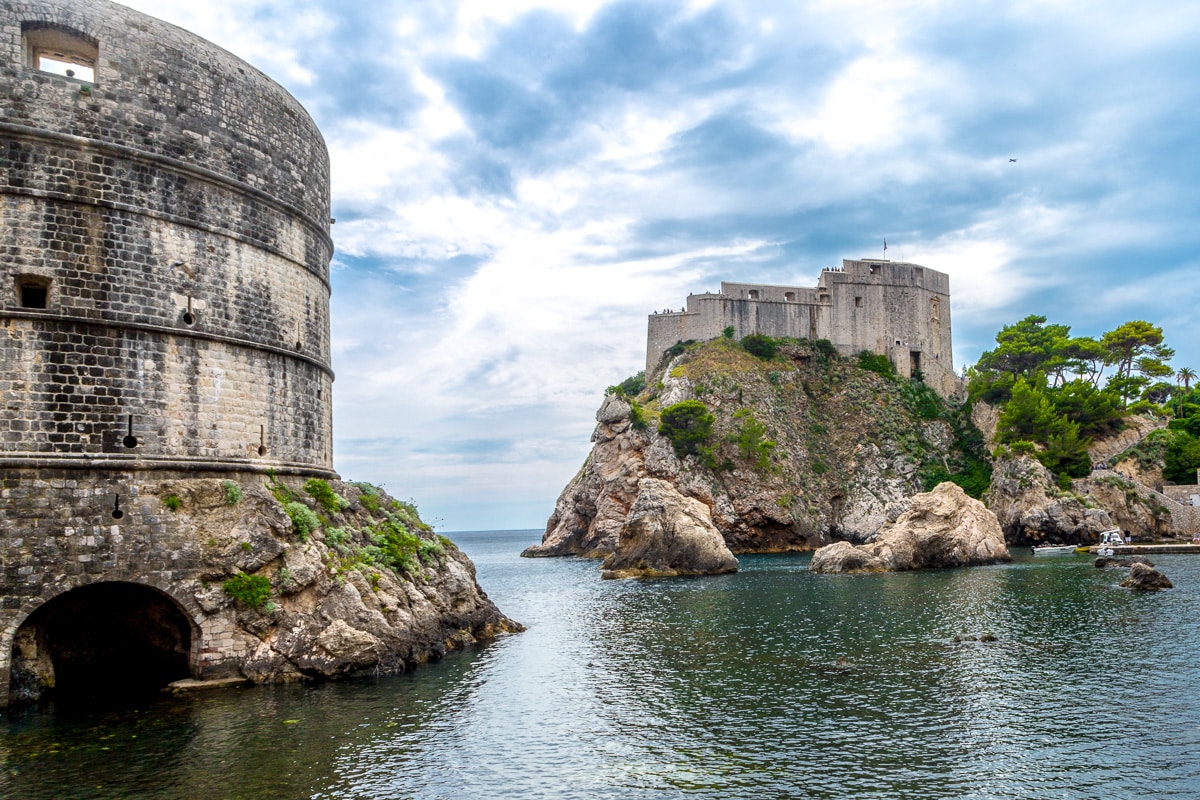 From there we visited the West Harbour and viewed Fort Lovrijenac, two more historical landmarks, as well as significant filming locations for the series Game of Thrones.

Back on the ship we had lunch on board and packed for the next day’s final disembarkation.

Dinner was scheduled at a restaurant back in the old town. As we boarded our bus, it began raining. It was just enough to make the polished limestone stones wet but the rain stopped once we exited the bus at the Pile Gate. 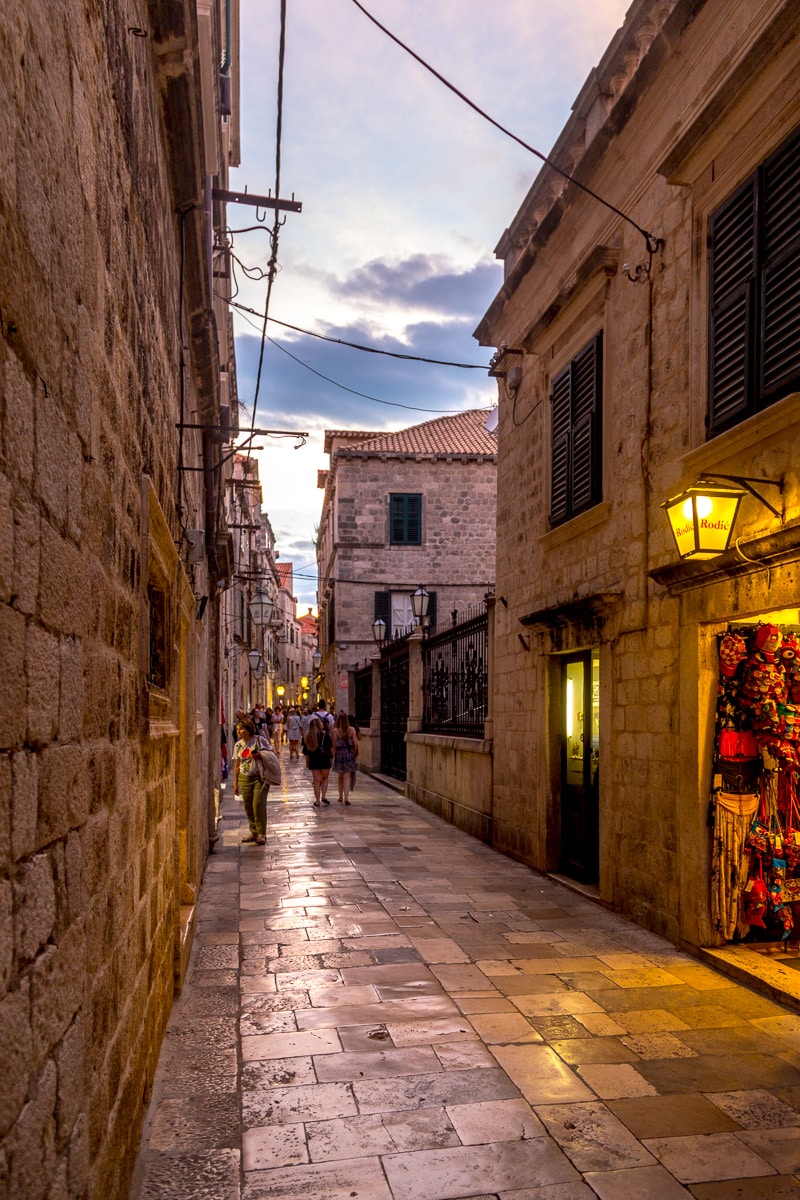 As we walked down the ramp between the gates doors, one of our group, Susan, slipped and fell. She reported feeling ok as her husband attempted to help her up. But as she reassessed how she felt, someone noticed some blood on the stone ramp. She had cut her elbow. And as she had gone down rather hard, she said that she also hit her head. Quickly, Maja, our cruise director joined us, got a seat for her to recompose. It was then decided she should get checked out at the local hospital. The rest of us walked on (carefully) to the restaurant for dinner, while a taxi was called for Maja, Susan and her husband Richard. 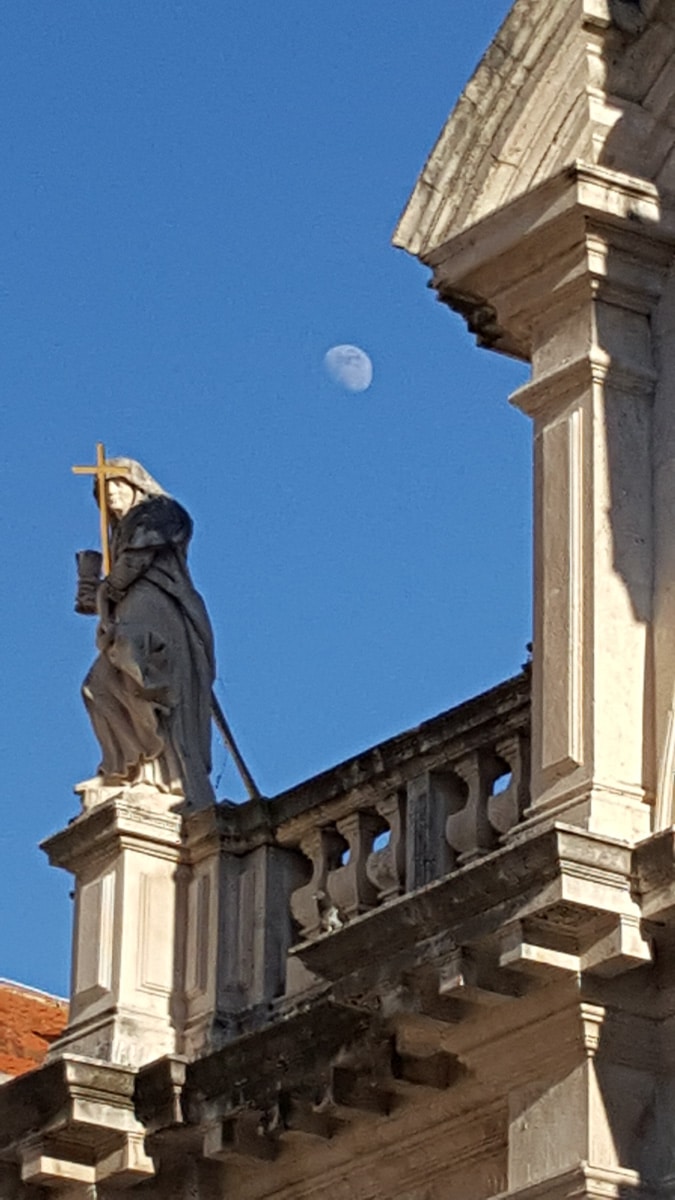 Our group was seated in a large dining room, and we were served a delicious squid salad as a starter, followed by tasty sea bass, and then panna cota for dessert. Afterwards we returned to Pile Gate where our bus picked us up. Some more rain fell as we drove back to the ship but just as quickly stopped. Our companions who had been to the hospital rejoined us back on the ship, and with the exception of a stitch in her elbow, all was well.

It was our last night on board the Stella Maris. Several of us gathered on the deck for final nightcaps recounting the journey and what fun it had been. We reminisced about our days together, toasted our new friendships and to future adventures before turning in.

Though it was the last night of the cruise, Jeannie and I still had another week to explore this fascinating city.

Images of locations used in filming the series Game of Thrones
are indicated with “GoT” at the end of the captions.