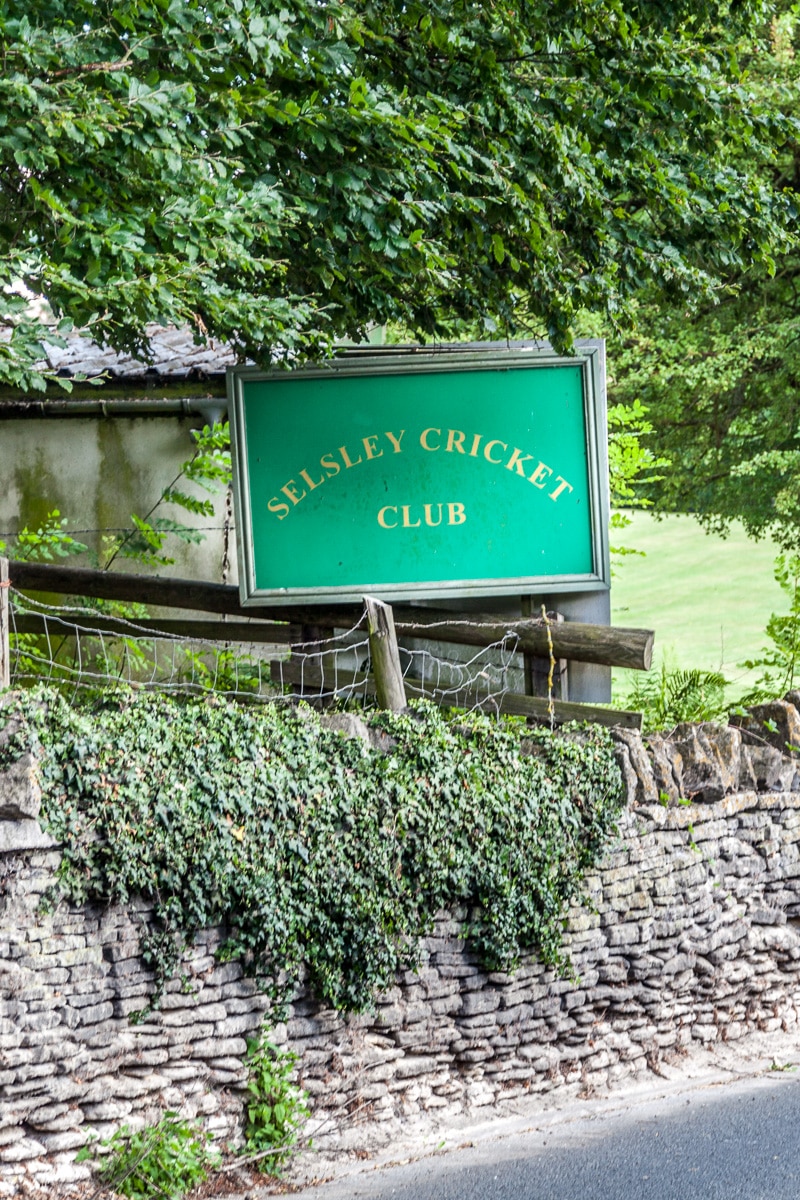 Not long after we arrived, on one of our trips down to the supermarket, we were walking past the Selsley Cricket Club and there appeared a banner-sign that hadn’t been there before, announcing a cricket match 2:00 Sunday of the following weekend. Some of the Club members were working on the grounds and we walked over and chatted a bit about the match and were enthusiastically invited to watch. It was a local event that we knew we must attend.

On the morning of the match, we had walked into town for the Stroud Nature Fest, returning in time to have lunch and return the 200 yards or so to the cricket grounds. We had essentially no prior knowledge of the game of cricket but it was a perfect afternoon to learn. [Note, terms used – cricket (baseball)] 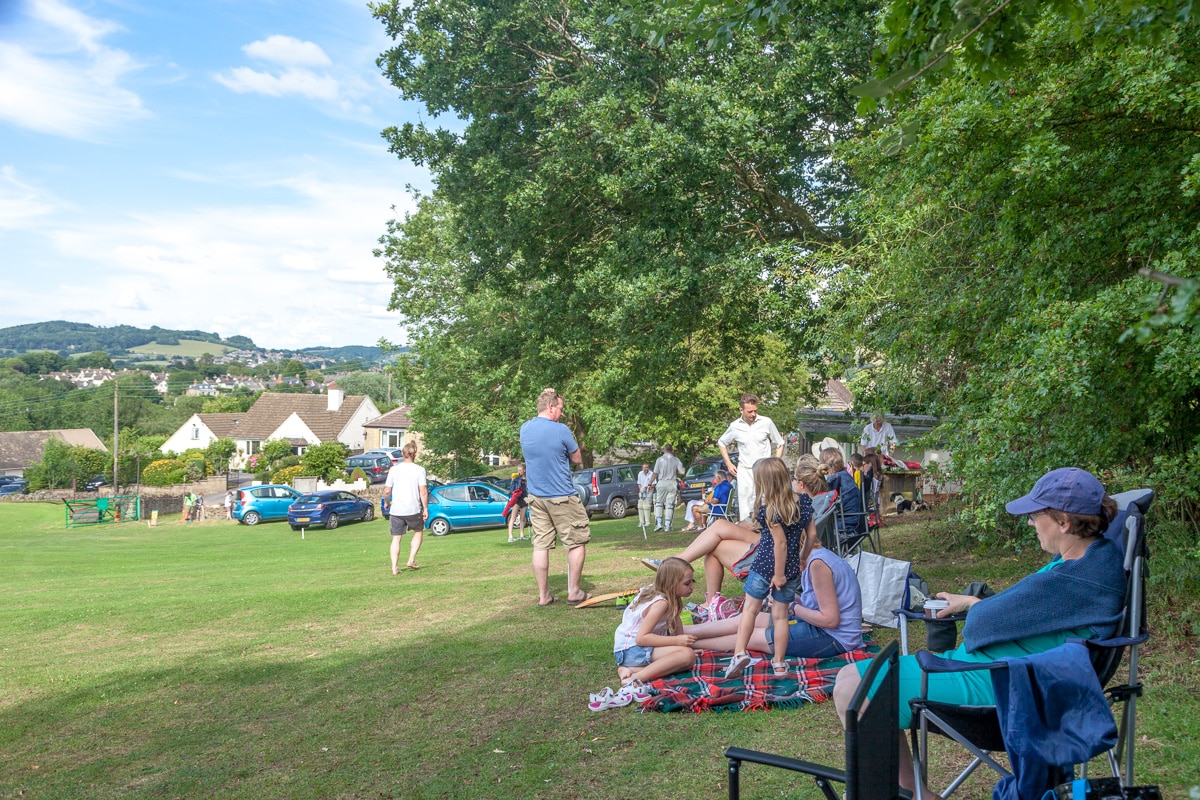 As we walked in, we made our way around the edge of the field joining the group of spectators with a good view of the rectangular 22-yard-long pitch (diamond), where most of the action takes place. The setting was perfect, with a backdrop of green hills covered with pastures, woods, and villages. The weather was sunny with a light breeze and comfortably warm. 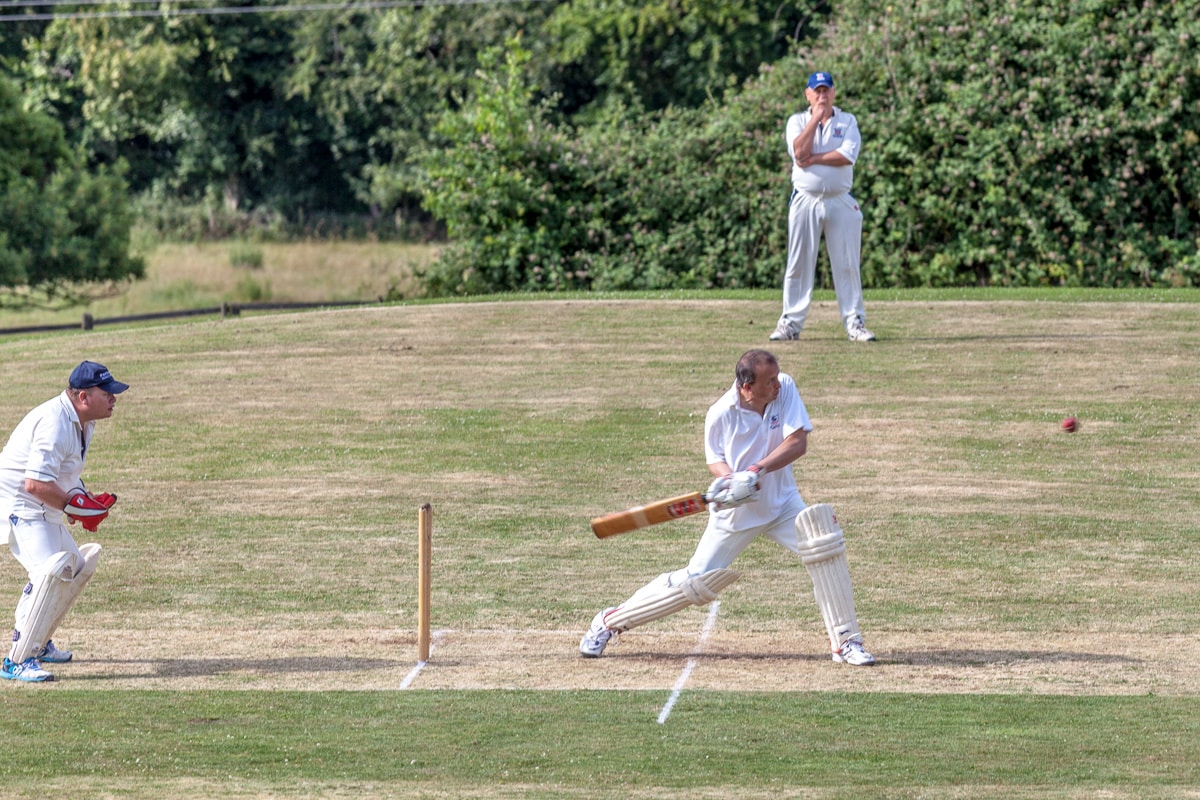 The similarities between cricket and baseball are several. Essentially, players of one team, 11 players (9) attempt to score runs by hitting the ball; at the same time players of the other team attempt to prevent the scoring and to put batting players out. However there more differences than similarities. 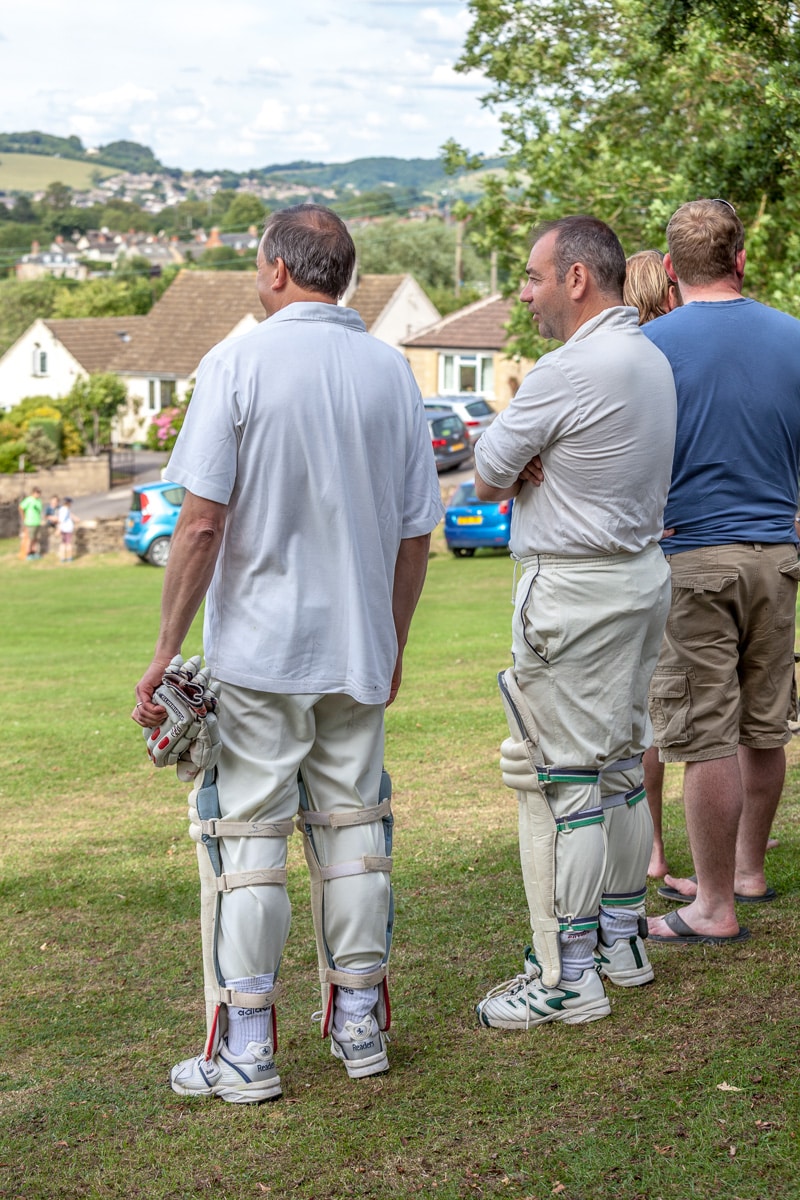 The game is composed of a bat and a ball that is bowled (thrown) by the bowler (pitcher) from one end of the pitch towards the wicket, a set of three wooden stumps topped by two bails, and to the wicket-keeper (catcher). The “striker” attempts to prevent the ball from dislodging the bails, (while a “batter” attempts to prevent the ball going to the strike zone). Both sides attempt to score as many runs (runs) as possible during periods of play called innings (innings).

To say that we now understand the game would be a mistake, but we did enjoy the afternoon in the company of a number of local residents with whom we shared conversations and at the appropriate time, tea, sandwiches, and cakes. When the game was over, we said our goodbyes and we went away a better appreciation for what is known as ‘a gentleman’s game. But more importantly, we left with new friendships.

The annual match between the Club side and “The President’s Eleven” was played at Selsley Cricket Ground on Sunday, July 31, when the Club Captain Paul Ind won the toss and chose to bat first.

Jody Stocks and Paul Ind opened the batting for the Club and faced some good fast bowling from Mark Chicken and Paul Wheeler on a firm and well prepared wicket.

Ind was unlucky to fall lbw to Chicken and was closely followed by Stocks when Wheeler made an athletic caught and bowled.

Further early wickets fell with few runs on the board until Jack Hicks and Carl Old steadied the innings with some fine aggressive batting both scoring 29 runs.

The innings closed just before tea for 93 runs all out following some fine bowling from Chicken, Steve Bartlett and Paul Wheeler.

An excellent tea prepared by Elizabeth Gardiner and friends was enjoyed by the players and enthusiastic spectators before Selsley took the field. Jody Stocks and Jack Hicks opened the bowling against Mark Applegate and Steve Bartlett who batted well for the first few overs before Applegate fell to Hicks with a fine catch behind the stumps by Ind.

The President’s side captain Dave Ryland came in and scored five runs before falling to Hicks lbw [leg before wicket].

Bartlett was caught off Stocks for five runs.

Chicken batted well before Ind took his wicket with another catch behind the stumps off Nathan Sutton for 11 runs.

Wickets then fell quickly before the side was all out for 49 runs.

Thus the Club side won convincingly after a match played in excellent spirit with some good cricket much enjoyed by both players and spectators.

The wicket was in fine condition due to the consistent hard work through the season by Paul Ind, Jody Stocks and Chris Hooper.

The Club has had a mixed season with a few matches having to be cancelled.