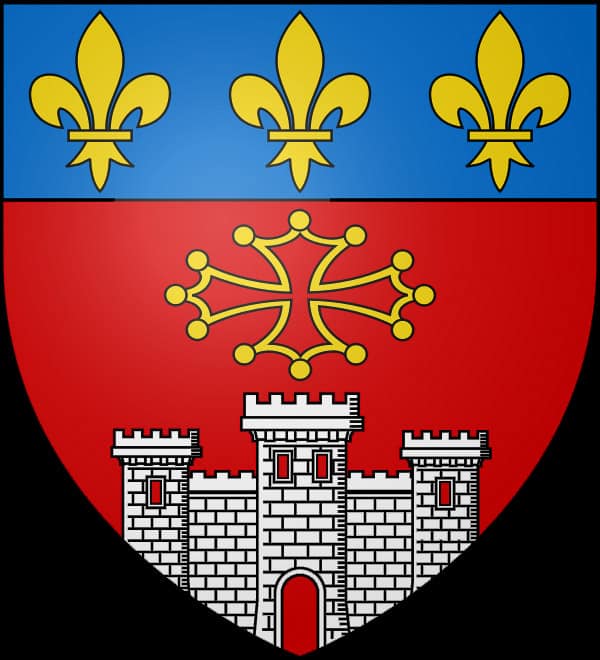 The route to the hilltop bastide of Cordes-sur-Ciel didn’t allow much of a view of the town until we were close. But the instant we saw it sitting high on its hilltop we knew that this was a good choice for a couple of nights.

The B&B where we were staying was “La Maison au Puits” at the foot of Cordes-sur-ciel. Christianne and Nico welcomed us warmly, got us settled in and provided a wealth of information on walking in the area and the best routes up to Cordes. Oh yes, staying at the base of the town means that to get there is a steep, uphill hike so the local information was much appreciated. 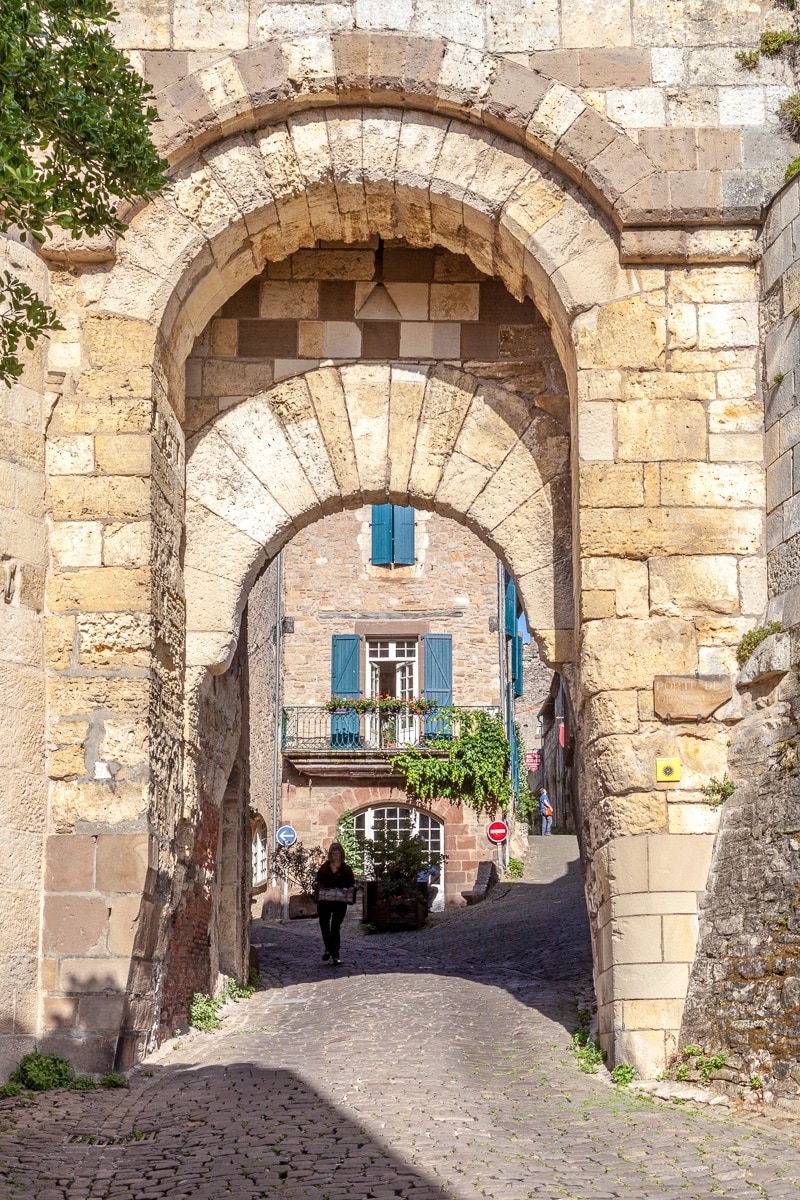 That uphill hike was around a kilometer (between ½ and ¾ mile), half of which was on cobblestoned streets. On the way up we passed through the Porte des Ormeaux, one of two medieval gates into the city. Both gates were state-of-the-art defensive structures at the time (1222-1229).

As we wandered, we admired not only the ancient buildings, but also the spectacular views over the countryside. Today, these views are appreciated for their beauty, but in the 13th century it was essential to be able to see an approaching army and to defend the town and its inhabitants. 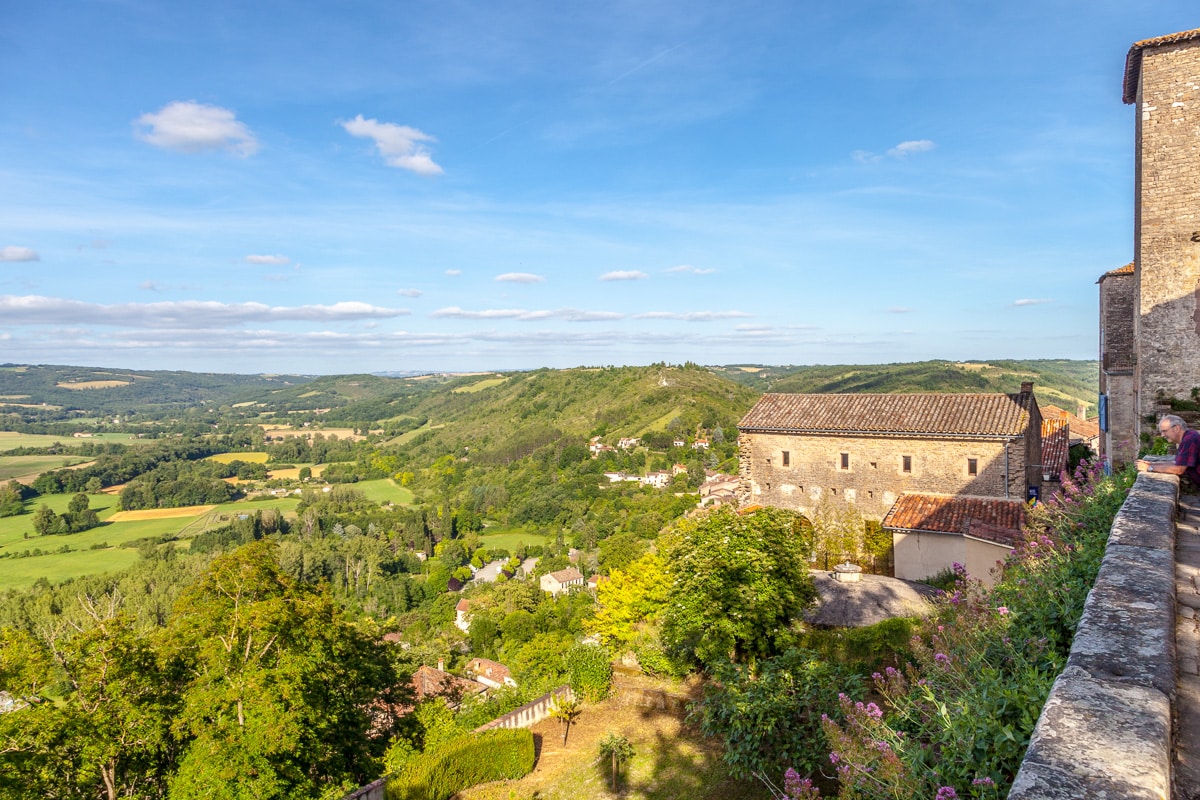 Before we had begun our trek up into Cordes, Niko at the B&B had made a reservation for us at a restaurant there. We had enough time to do a little wandering as well as stop for a drink at one of the outdoor cafes. The panoramic views from our table and the nice, cool breeze made it a rather relaxing place to stop and reflect on what a busy day it had been, as we had visited four other bastide/castelnau villages, yet we really hadn’t rushed. 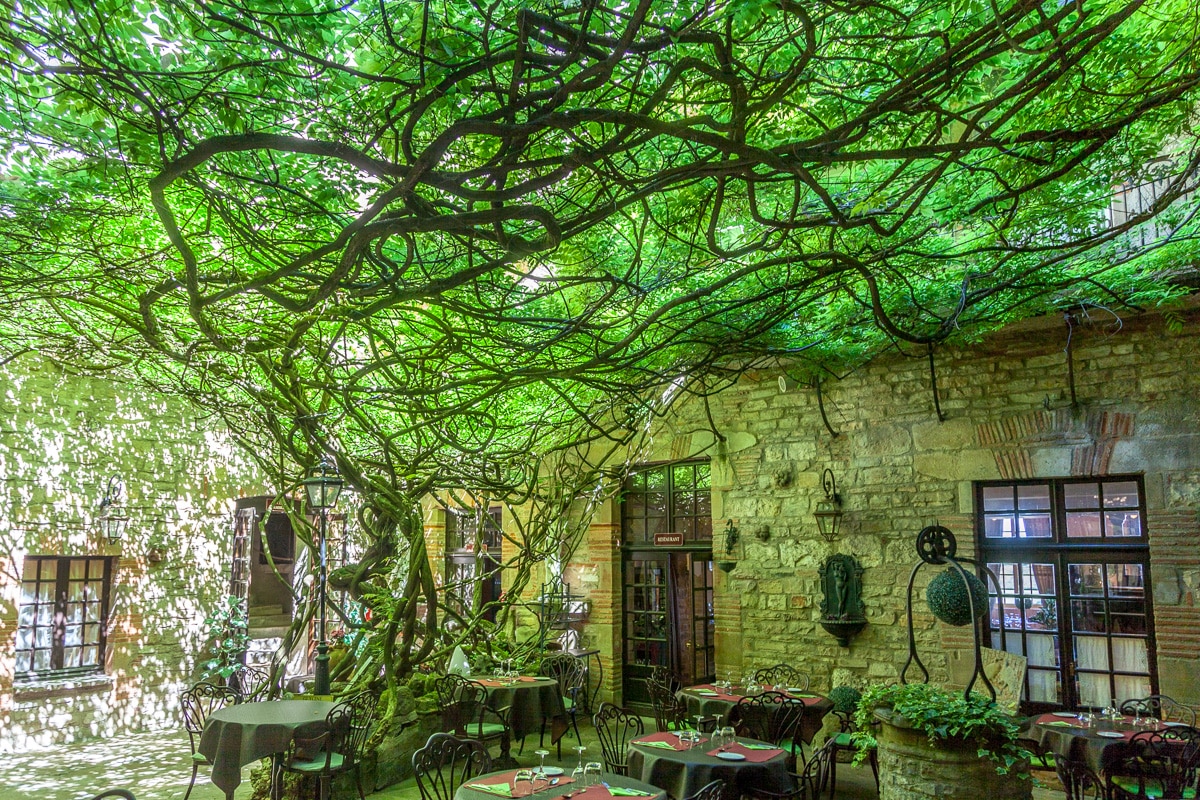 As the time approached, we made our way to the restaurant, entering through a large enclosed patio covered with a very large wisteria vine that created a lovely ceiling against the early evening sky. Our table was next to a window that again provided a panoramic view over the beautiful green surrounding landscape. 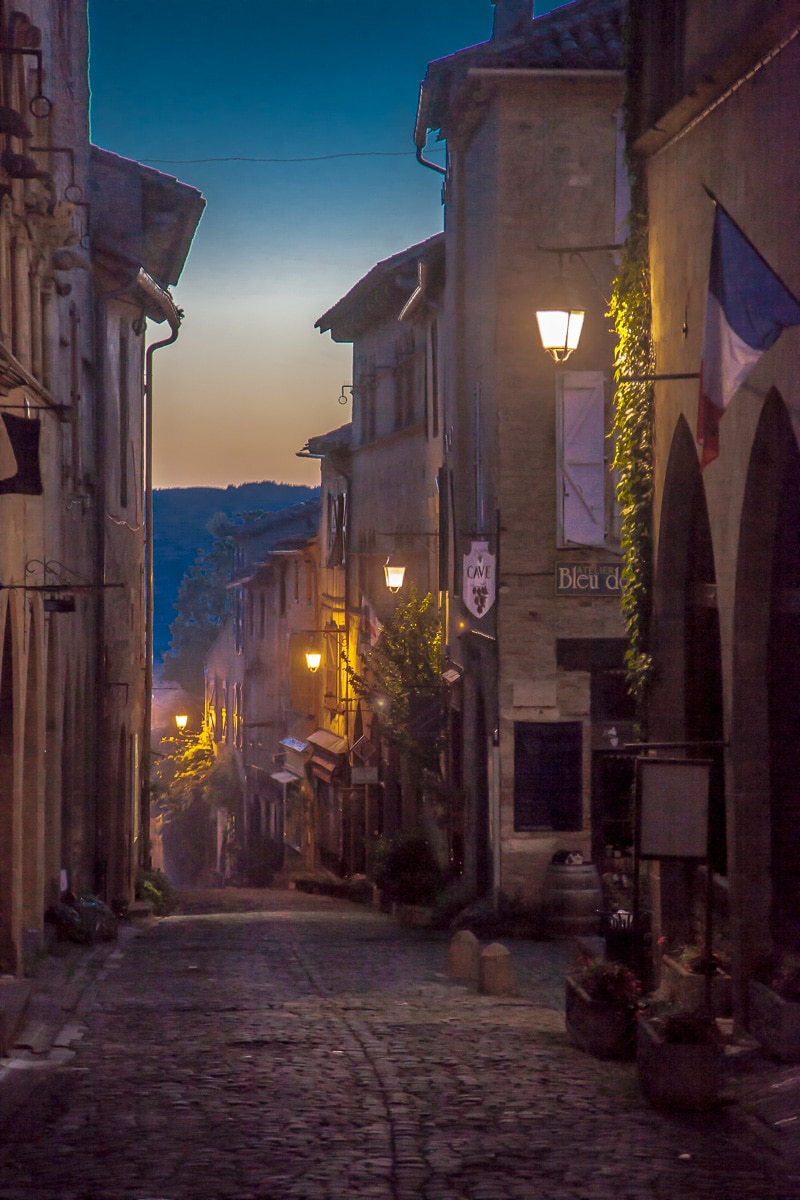 After a long, casual, delicious meal, we strolled back to our B&B under a clear twilight sky (~ 22h00 or 10:00pm). The full-moon would occur in a couple of days, and the lunar glow provided a gentle light as we made our way through the quiet, empty streets amidst the ancient buildings. It was a magical end to a full day of adventure.

The following day began with an early breakfast and conversation with our fellow guests at La Maison au Puits. Nico, aware that I was a photographer and an avid photographer himself, suggested a viewpoint of the city from the top of a nearby hill, and then a hike into the countryside in the opposite direction. So we packed our daypacks, and took off. 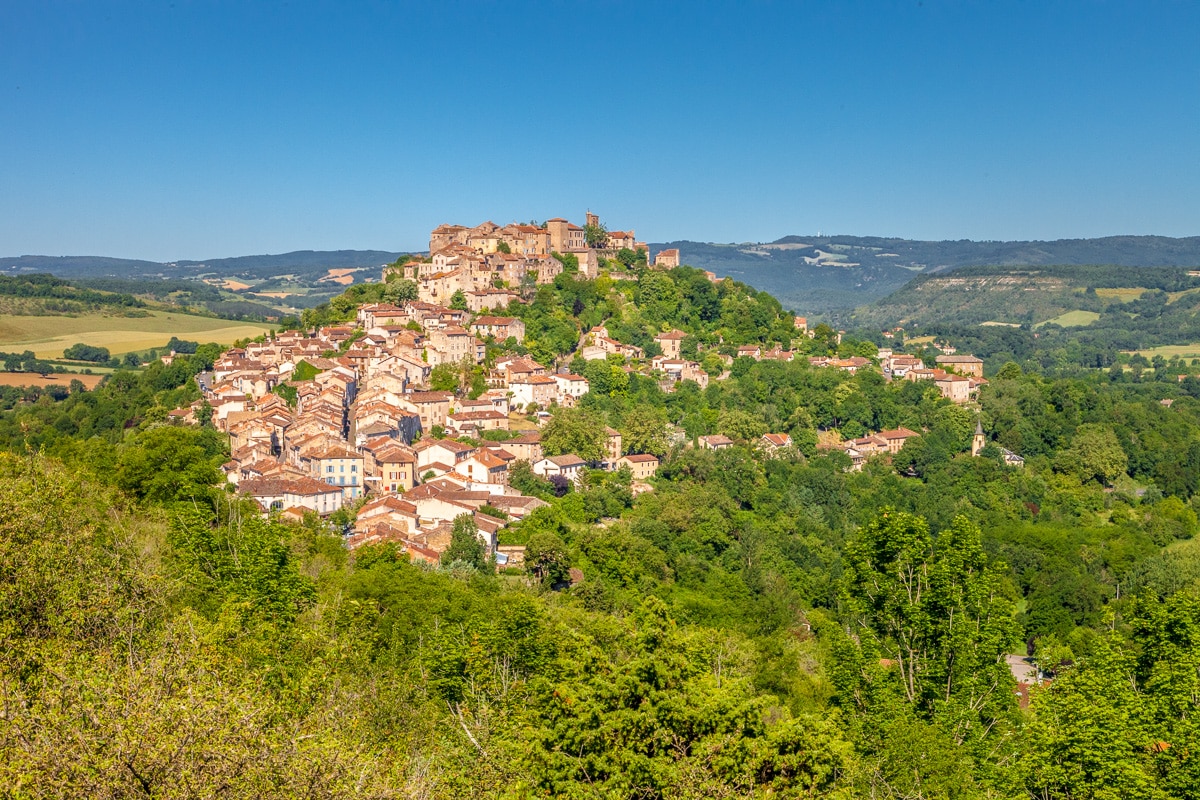 The ramble to the viewpoint took us through the town at the base of Cordes, and we picked up a couple of sandwiches for a picnic later in the day. It was a flat walk until we arrived at the base of the hill with the viewpoint, then it was straight up a rocky gravel path.

The view at the top was incredible. Cordes-sur-Ciel sits atop a rocky hill at the center of several intersecting valleys. The primary river that flows through the area is the Cérou, and is joined by L’Aurausse, a smaller stream. All of this geography is visible from the narrow viewpoint where we were standing. There were farmlands, pastures, vineyards, and forests as far as one could see, with Cordes situated at the center.

Making our way back down, we had to climb up again into Cordes taking the really steep route that we had been warned about. It was indeed a challenge as we walked slowly uphill past the shops and offices that lined the cobblestoned street. 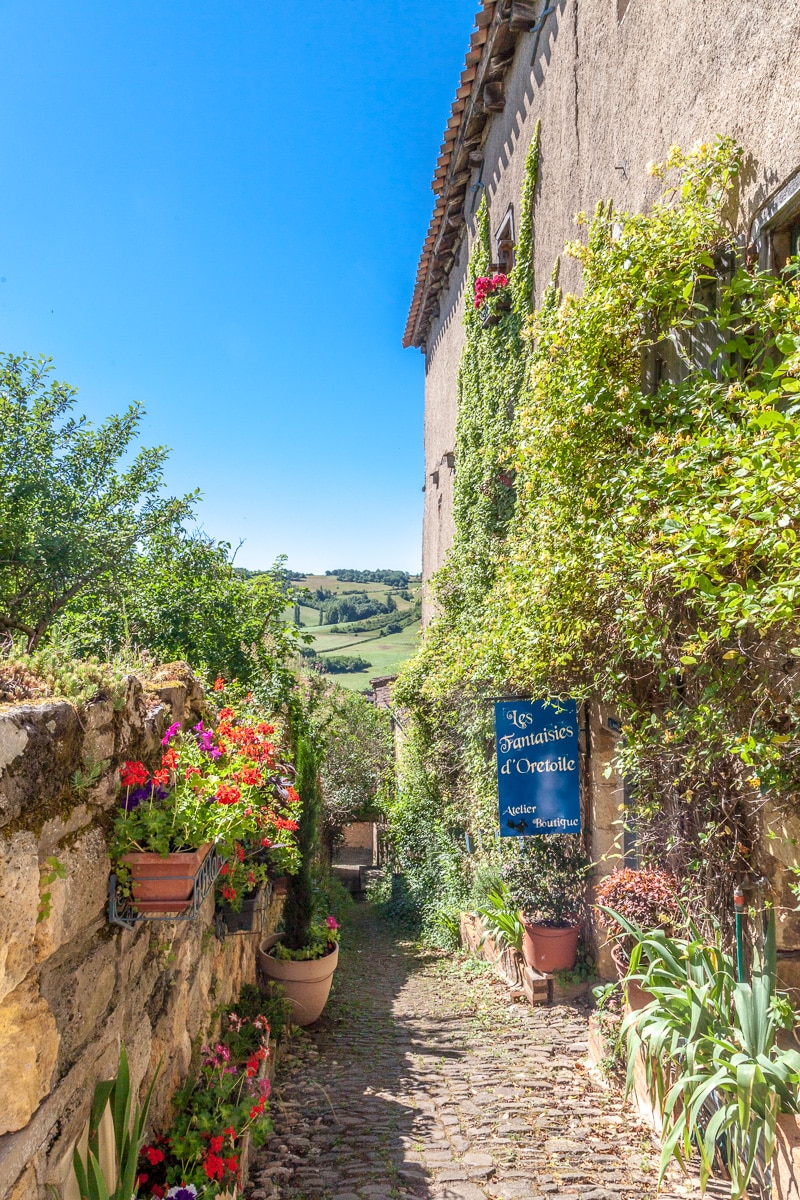 As we approached the center of town Jeannie, who is always attracted to shops with “shiny things”, went into one jewelry shop and found the perfect pair of earrings fashioned by the craftsman who owned the shop.

After a bit of roaming through Cordes again, we headed back to the B&B for a brief stop before taking off on a long hike through the country. Nico had printed a map with three colored routes we could consider. We decided to cobble parts of each into the day’s walk.

The day was quite warm, and as we had started after 12h00, the sun was at its highpoint. There were very few cars on the country backroads, and we worked our way between little pools of shade from trees. 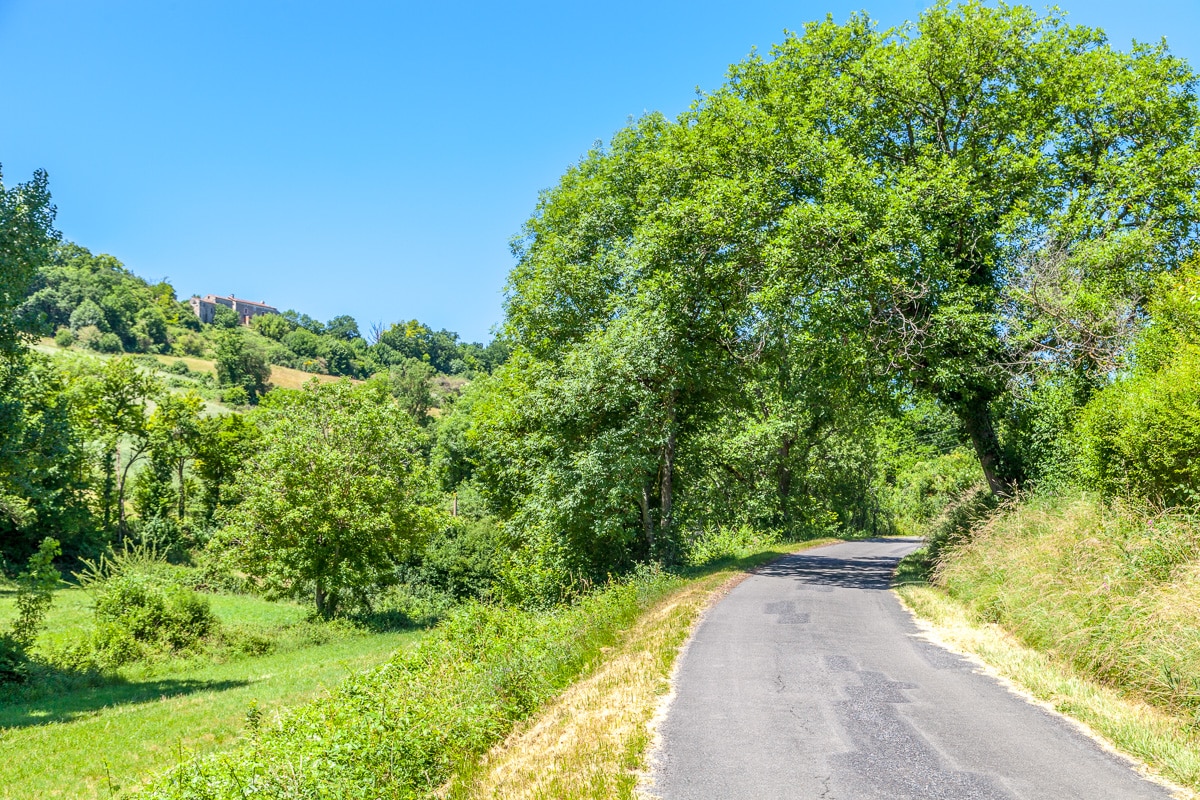 As we walked along, Cordes-sur-Ciel was often visible in the distance through the trees or above the pastures. As we walked down one tree-lined lane, we saw in the distance two horses coming toward us. Riderless, they strode past us with nary a glance and disappeared around a bend as we continued on. 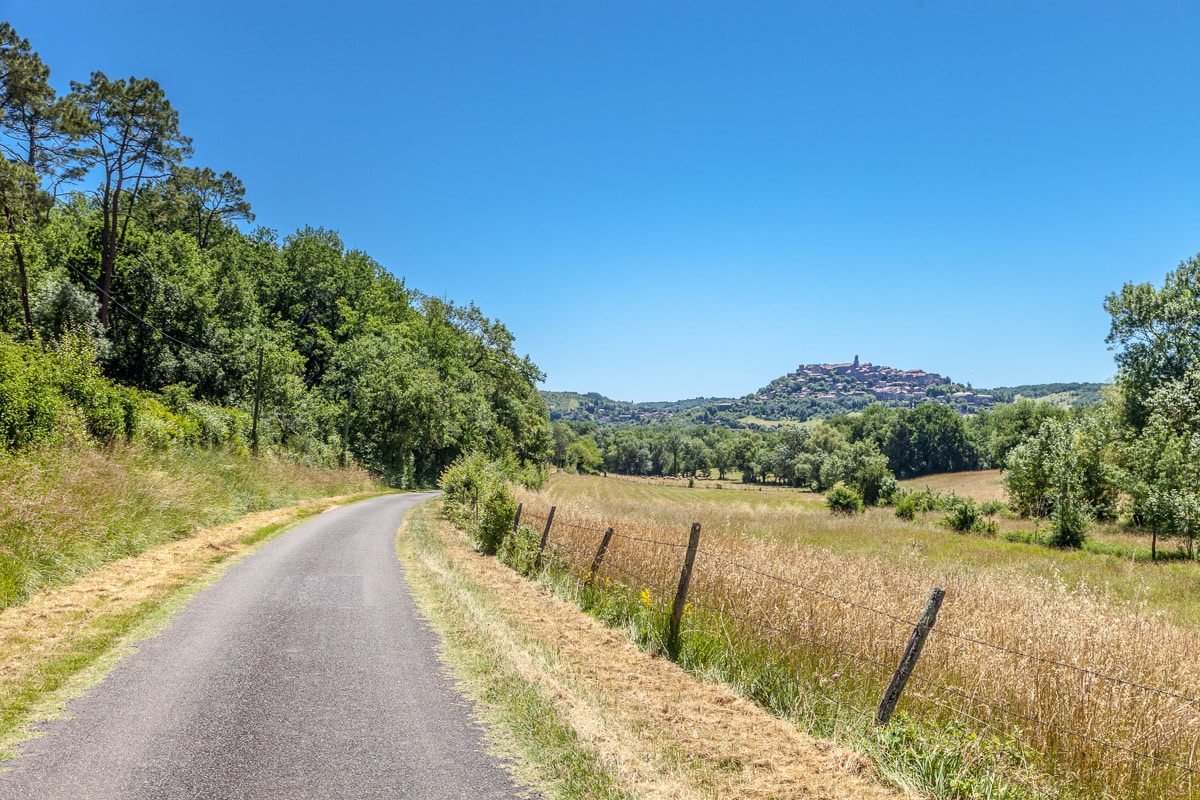 The whole day’s walks totaled 16k (10mi) over some very steep roads and paths. Arriving back at the B&B, we were glad that several times a week they serve a three-course dinner, and we had decided to sign up. The meal, prepared by Nico, was wonderful and with the six others at the table, a wonderful evening was had by all.

The following day, we again had a good breakfast before saying our goodbyes to Christianne and Nico, and Cordes-sur-Ciel. This day would take us through more amazing landscapes and to several new towns. 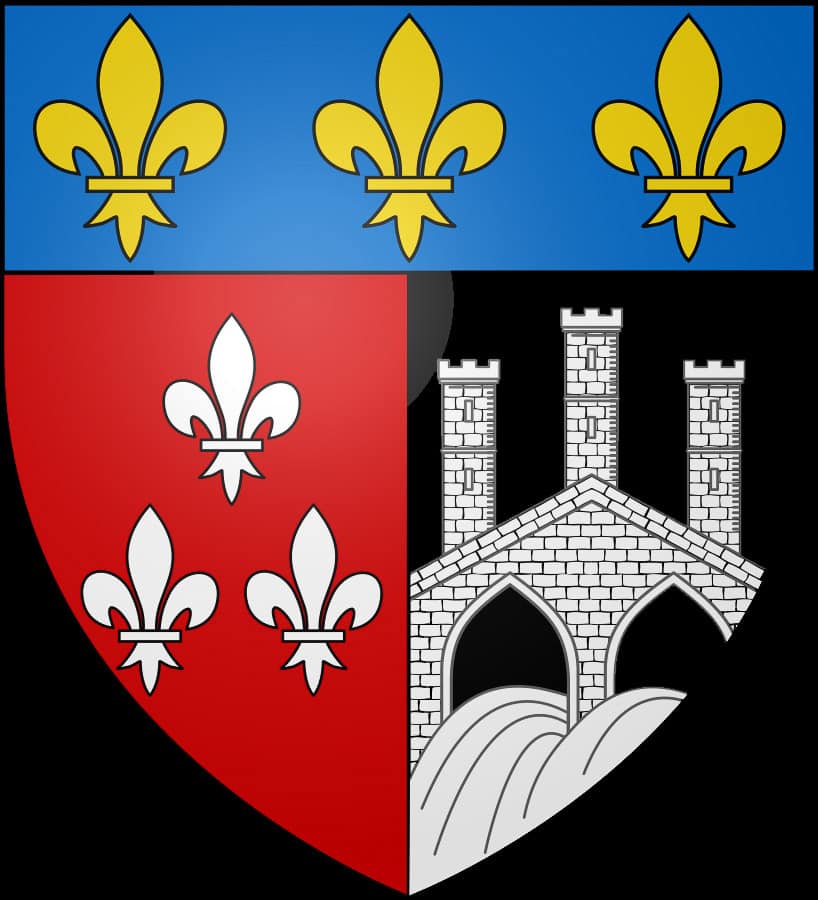 Our first destination was situated in the famous Gorges of the Aveyron River where it meets the Bonnette under the massive limestone cliffs of the Roc d’Anglars. Saint-Antonin-Noble-Val, has played essential roles in the region for centuries. It was sieged and sacked numerous times as well, yet it survived.

Today, Saint-Antonin-Noble-Val’s medieval layout has hardly changed in over 800 years. The stone arched and half-timbered houses line the winding cobblestone streets with their mullioned windows, Gothic or Romanesque arches, and old gates. As is our style, we wandered the town following a route on a map from the Tourist Information office. It is an amazingly preserved medieval town. 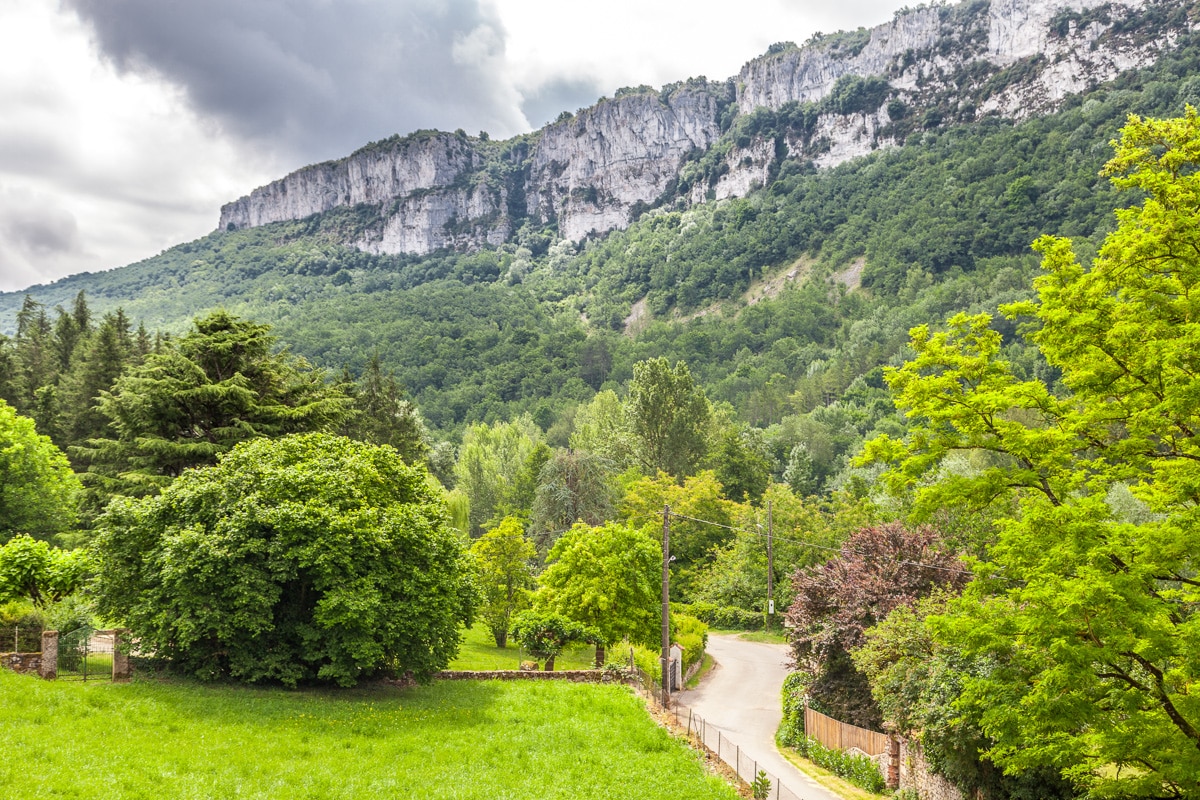 So, it is no surprise that Saint-Antonin-Noble-Val was used as the picturesque medieval village in the 2014 feel-good film, “The Hundred-Foot Journey”. We re-watched the film not long after visiting the town and found ourselves frequently saying, “I know where that is!” 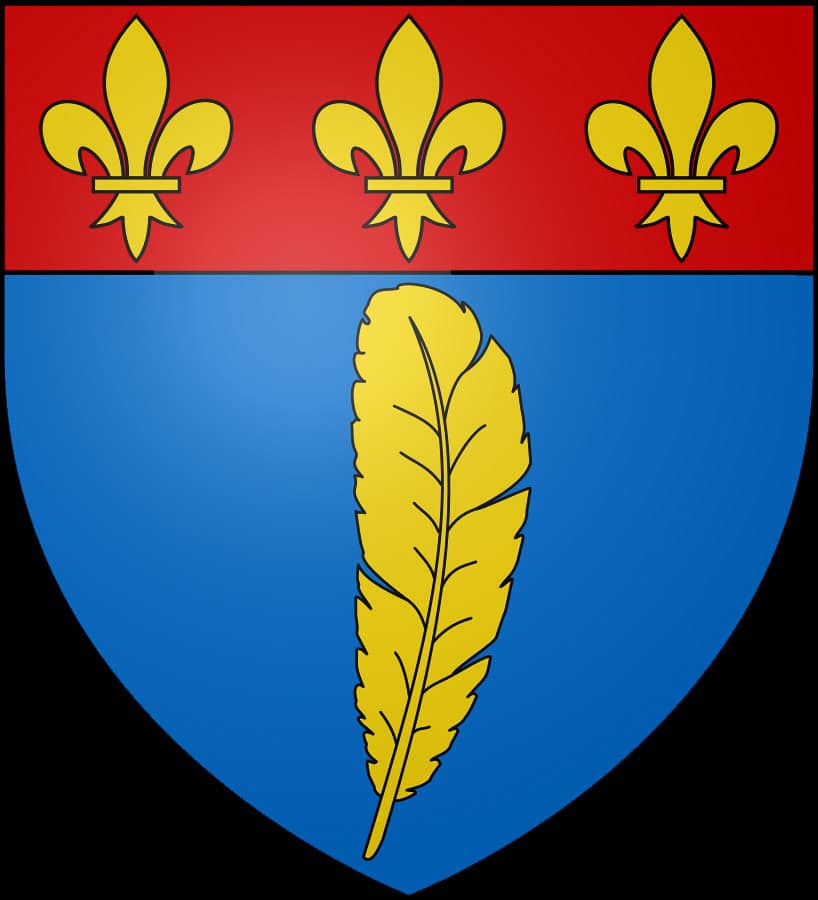 After picking up some sandwiches for a picnic along the road, we departed Saint-Antonin on a small road that would take us through some of the narrow Gorges of the Aveyron on our way to Penne, a dramatic citadel built on a rock spur.

References to Penne, meaning ‘large feather’, can be found as early as the 11th century, but the main towers date back to the 13th and 14th century. It is quite a sight from a distance. 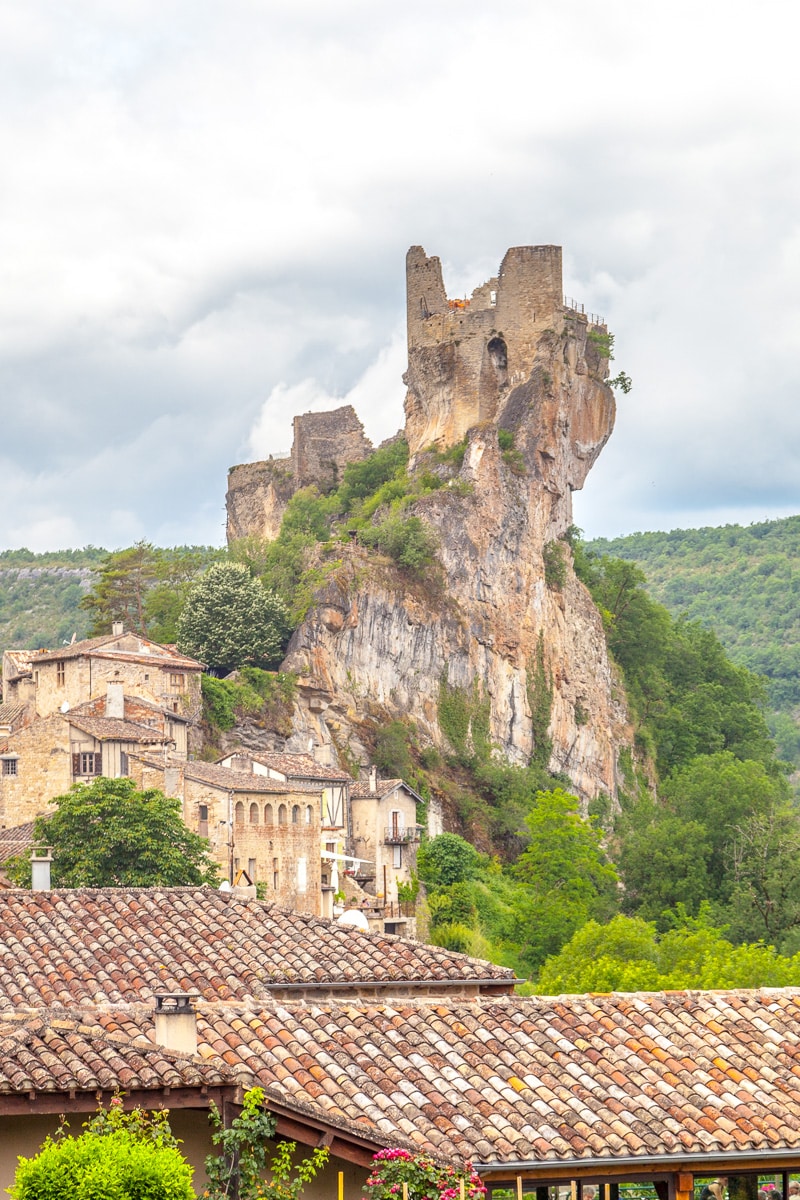 The resemblance to a big feather is not lost, as the narrow rocky crag stretches skyward topped by the fortress. We didn’t have time (or energy) to climb to the top of the castle, but did enjoy wandering the small medieval village that surrounds the base of the “feather”.

There were picnic tables near where we parked the car, so before we left Penne, we ate the sandwiches we had purchased earlier and decided on a route back to Toulouse. We weren’t in a hurry, so Jeannie navigated us on a series of beautiful backroads. We briefly retraced some of our previous travels, but the majority of the route was new to us.

The last stop of the day was the town of Rabastens. We had a little time to wander about, and as we did we came across the Eglise Notre Dame du Bourg, a UNESCO World Heritage Site. This church was built in 1229, and construction continued over the next century or more. 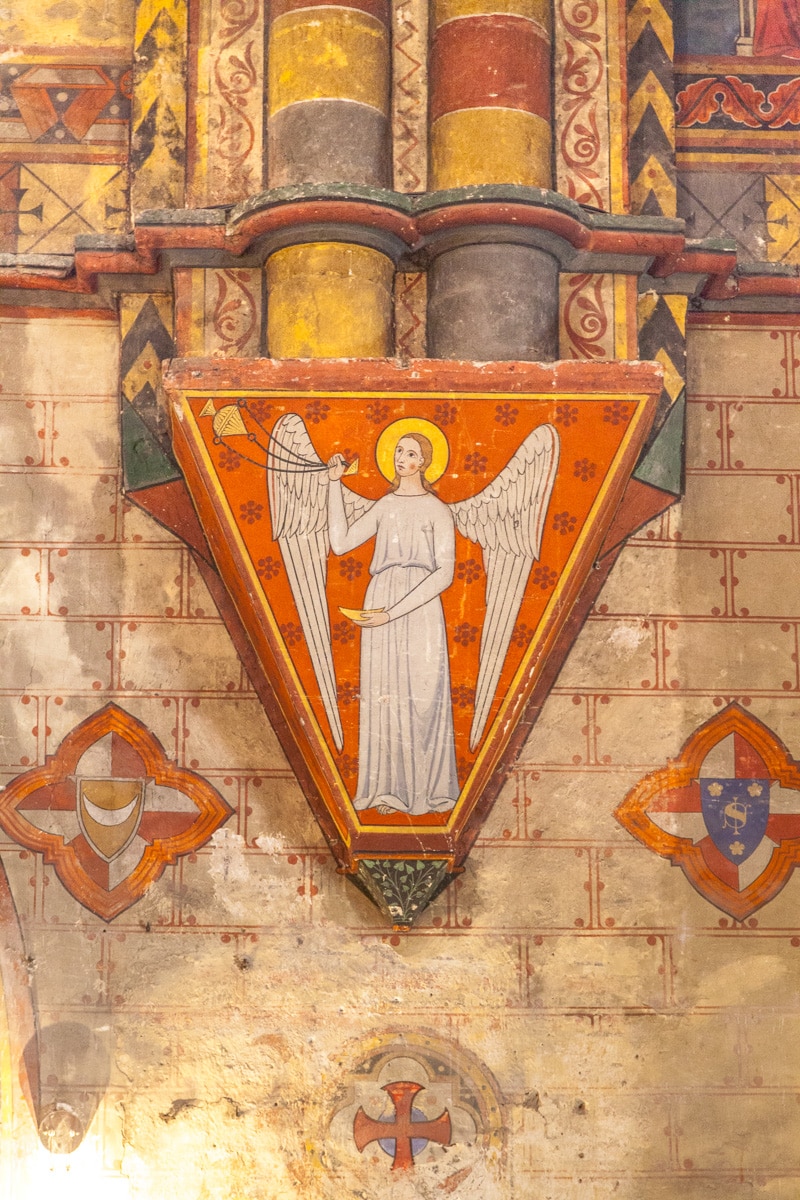 The most remarkable aspects of this church were the many beautiful paintings that were completed at the end of 13th – 14th century, as well as the eight Romanesque capitals around the entry, that survive from the original church that was destroyed in the Albigensian Crusade.

Wandering about a bit more, we stopped for some coffee at a small cafe before heading back to Toulouse. The drive back was quick, and after returning the car to the rental agency, we made our way back home. It had been an incredible three days away, yet it was good to be home. And though our time in France was quickly coming to an end, we were in no hurry.