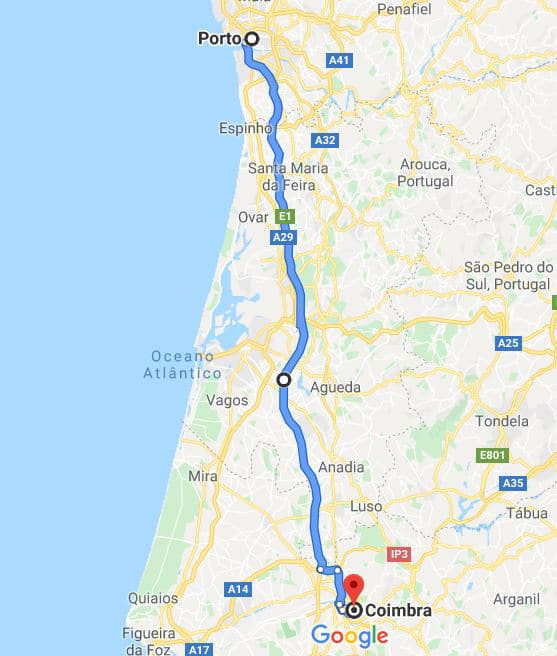 19 September 2019 – Our stay in northern Portugal was coming to an end, but before heading south, there was time for another overnight trip out of Porto. We had done our research and packed our backpacks for an 08h45 departure to the ancient university city of Coimbra (Ko-eem-bra).

Rising scenically on the banks of the Rio Mondego, Coimbra is a city steeped in history. The fourth-largest urban center in Portugal (after Lisbon, Porto and Braga), its population was 143,397 according the latest census data. 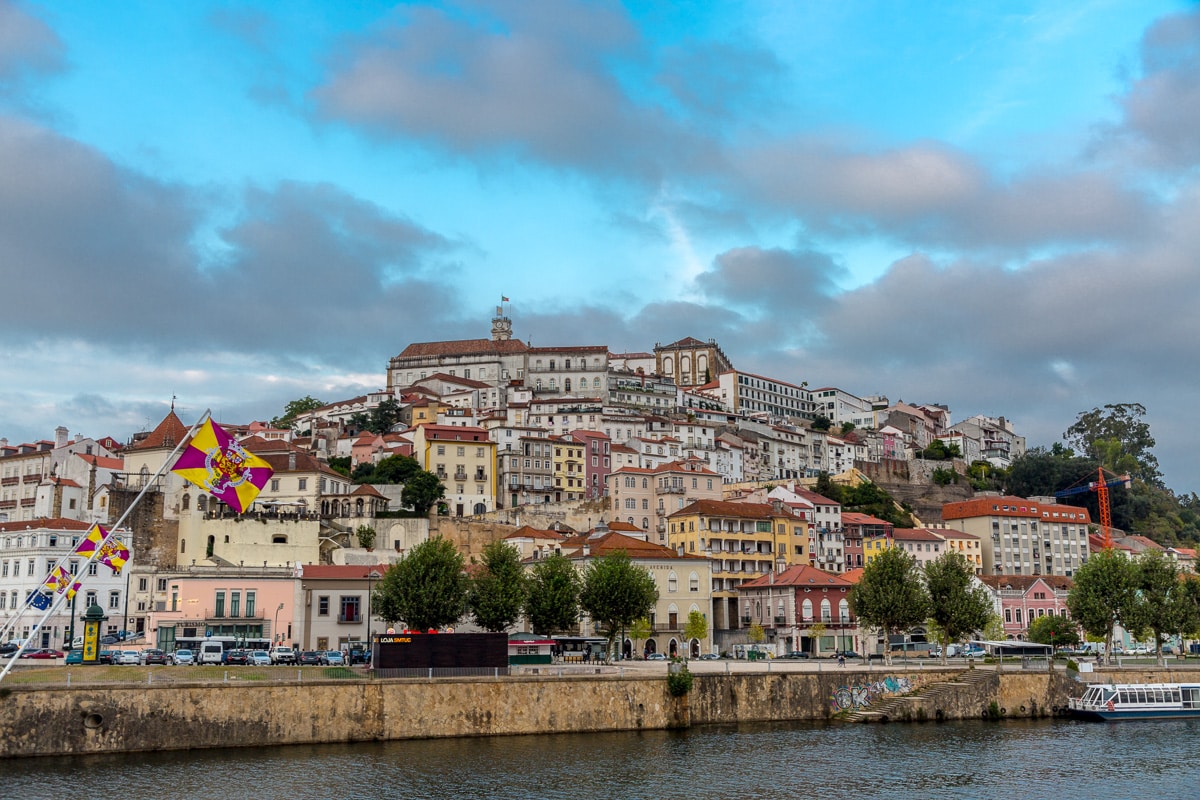 Founded during the Roman era, Coimbra (Aeminium in Roman times) became important by being at the confluence of the north-south road that connected the Bracara Augusta (later Braga) to the north and Olisipo (later Lisbon) to the south, and the Rio Mondego, the river that allowed connections between the interior and coast.

The first Muslim campaigns occupied the Iberian peninsula between 711 and 715. Coimbra was captured by the Moors in 714, and then, in 878 it was retaken by King Alfonso III of Asturias and León and repopulated by Galicians from the north. Afterwards, for more than a century it served as a base for the reconquest of Portugal from the Moors. 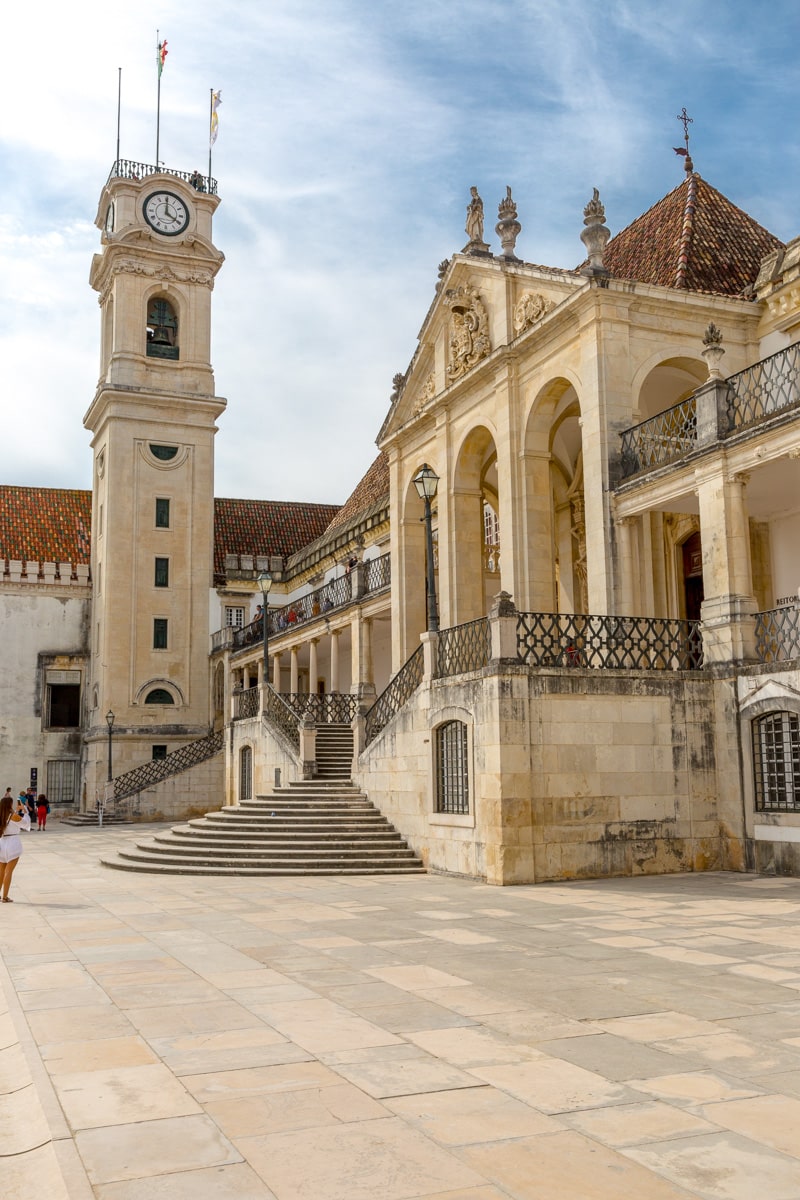 Coimbra was Portugal’s medieval capital for more than a century and is home to the country’s oldest and most prestigious university. Its historic center is laced with steep, dark cobbled lanes dating back to Moorish times. Its monumental cathedral was finished in the first decades of the 13th century.

For us, it was only about 1.5 hours by train, with not too many stops, and decent seats. We had to depart at the Coimbra-B station as fast trains don’t go into the old town. From there we caught the slow local train for the short, remaining distance into Coimbra. After stopping at the tourist information office for a map and suggestions, we located our Ibis (ee-bus) hotel. Because it was too early to check in, we dropped our luggage in the hotels storage. 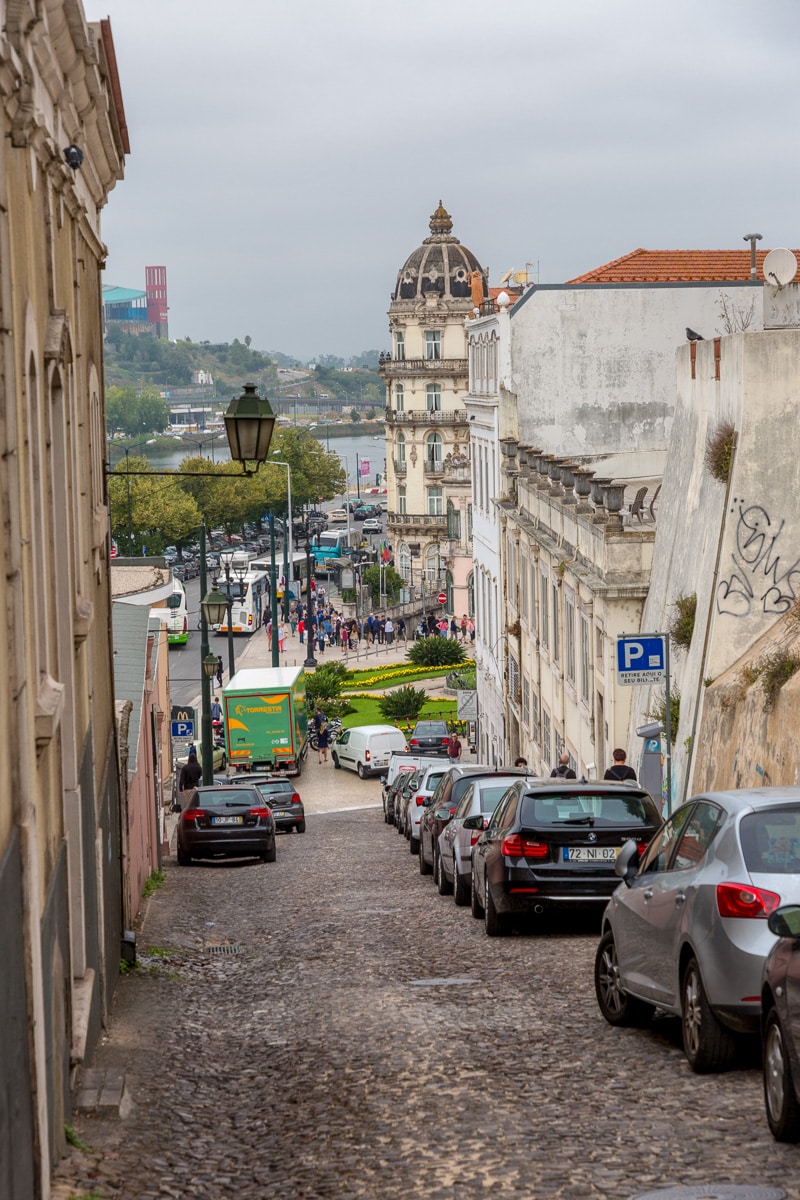 The morning was overcast but otherwise comfortable, so we decided to walk up to the university to find out about campus tour options. It was a steep, long walk, on very narrow sidewalks and confusing directions. We finally found the ticket office for tours of the University, but they only had same-day openings. We wanted advance tickets for the next day which could only be booked 3-days in advance. So we decided to return in the morning to get tickets.

We had previously booked a local walking-tour of the city (not the University) and were to meet at 14h00 back at the bottom. After we had a light lunch we met the group leader and the others for a good tour, with lots of great historical sights and information ending up at the University at the highest point of the city. 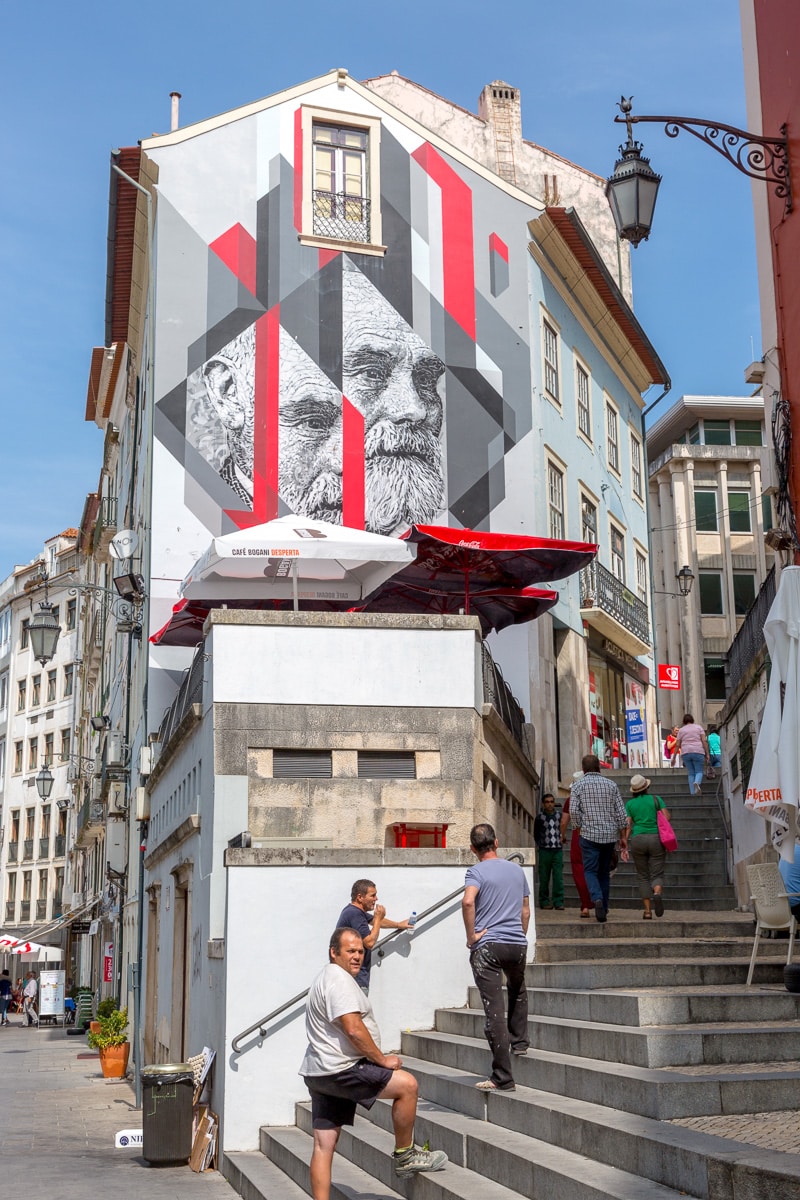 After our tour, we asked our guide about the University and library tour that we could have booked as part of our walking tour. But since we had booked a Fado performance at 18h00, it wouldn’t work into our day’s schedule. Before we left the tour guide, she checked if she could add us to the University tour at noon the next day. Hurray, tickets were available, so we arrangements were made for tomorrows tour.

While waiting, we learned of a bus that ran between the University to near our hotel. So we could ride back down, check into our hotel, take a few breaths in our room, and then go back out to get to the Fado presentation at Fado ao Centro before 17h30 as seating was first-come, first-served. We arrived early enough, and even had time for gelato while waiting in line. We were able to get seats in the 2nd row of the relatively small, intimate venue. 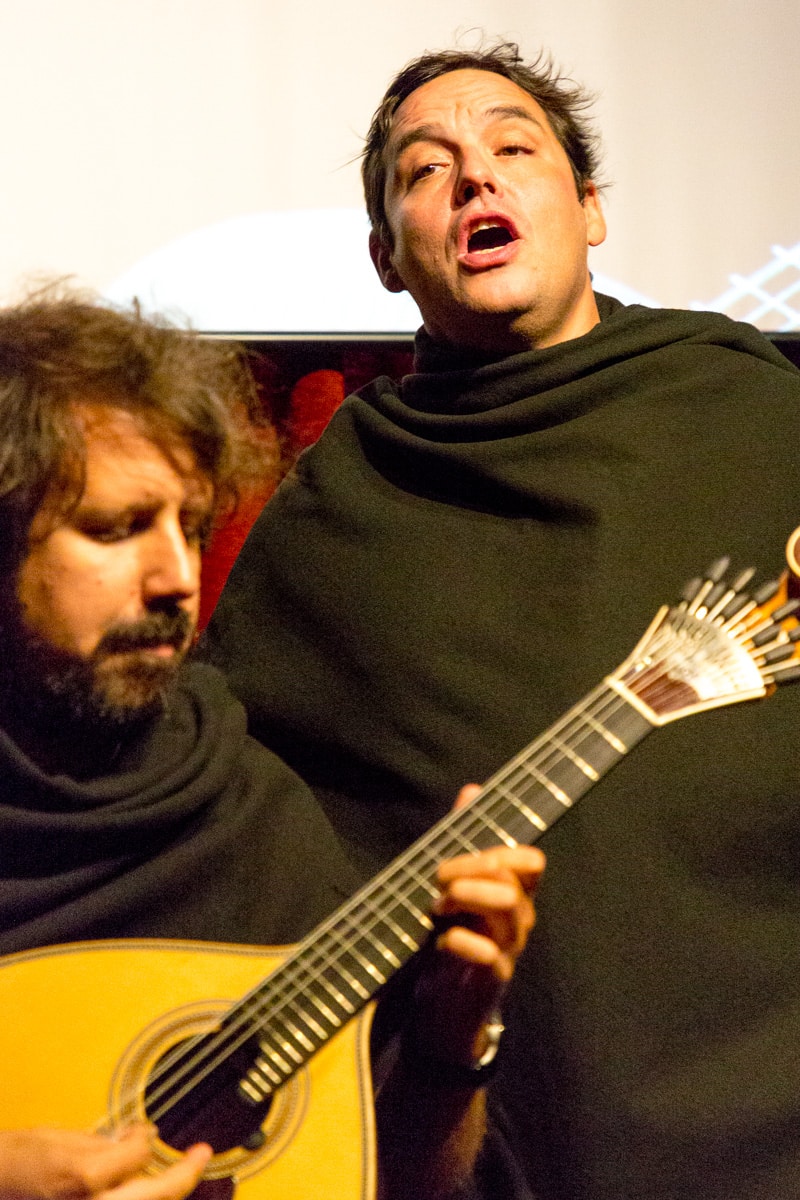 It was a great performance. There were two guitarists (one Portuguese guitar and one traditional six-string), two singers, presenting this distinctively Portuguese music for about 50 minutes. Afterwards, the audience was invited outside on the patio for a glass of port. 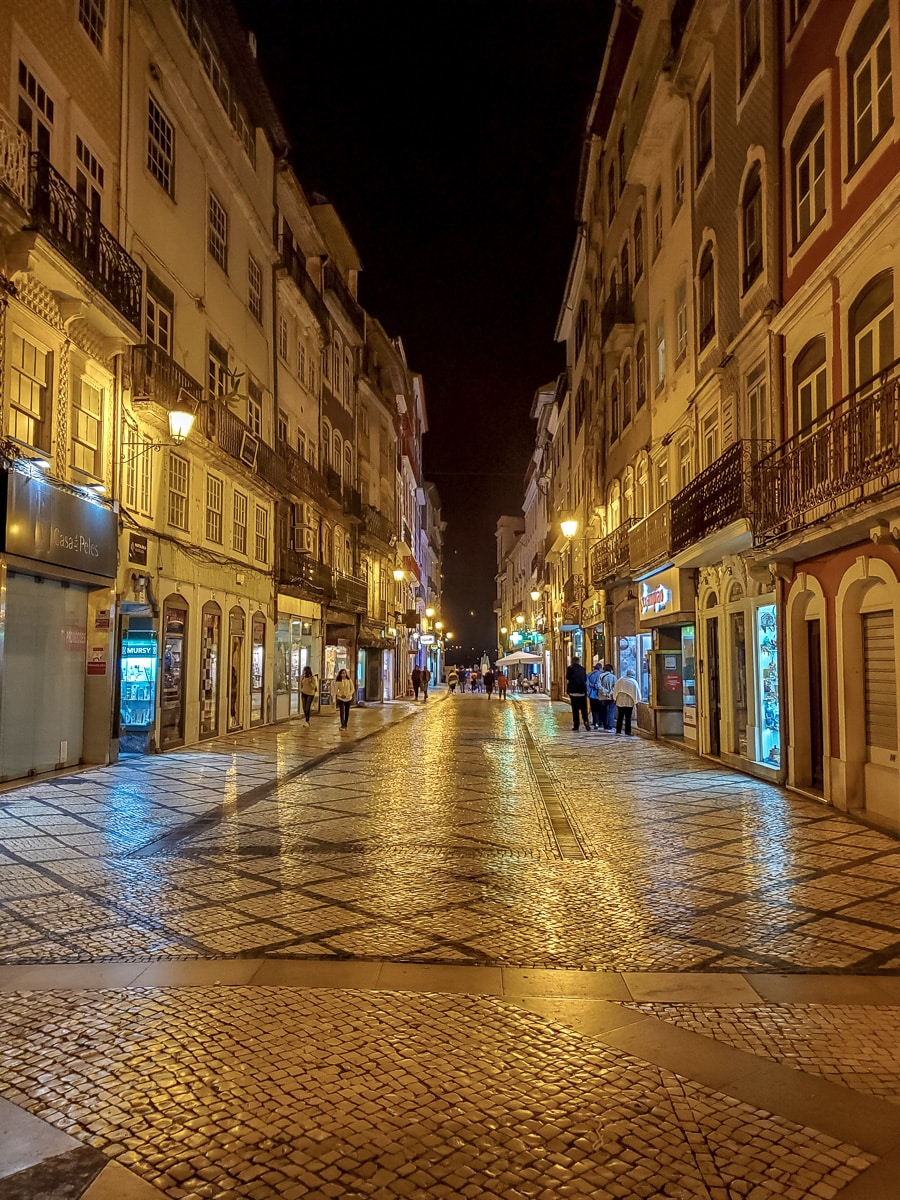 Lunch had been rather light, and by now we were getting hungry, so off to get dinner. The restaurant we had chosen wasn’t yet open and was very small, but the line didn’t look too long. However when the place opened, the owner came out and determined the number that could get in. The line was drawn in front of us and we would have to wait at least an hour before the next seating. So we decided to go to our second choice, getting there while there was still seating. We ordered several small plates to share along with a bottle of their great wine-of-the-day.

The evening was cool and clear, the students and crowds had disappeared, and as we meandered our way back to our hotel we reflected on the ancient medieval setting that spread out before our feet.