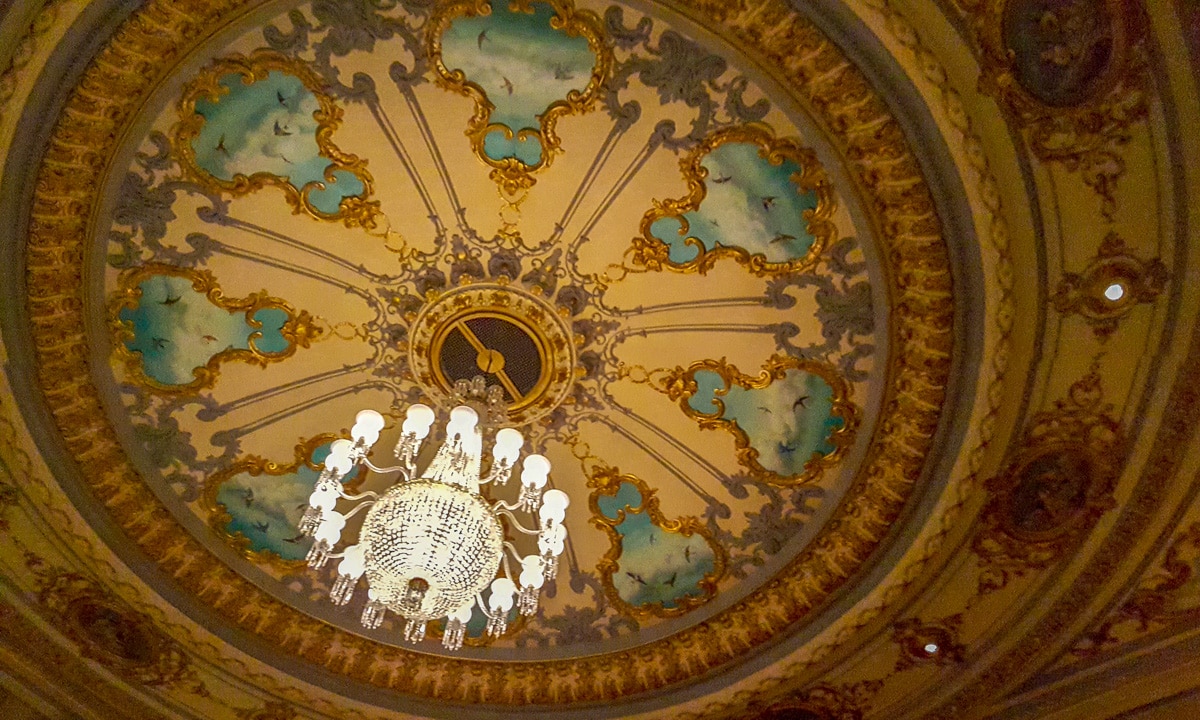 Jeannie was especially excited to be visiting Cheltenham, as we hadn’t seen any dance in quite a long time. The New English Ballet Theatre was performing at Cheltenham’s Everyman Theatre on Sunday night. We didn’t really know much about the group, the venue, or the city, but we had our tickets for the performance, a reservation at a B&B, and train tickets for easy travel. 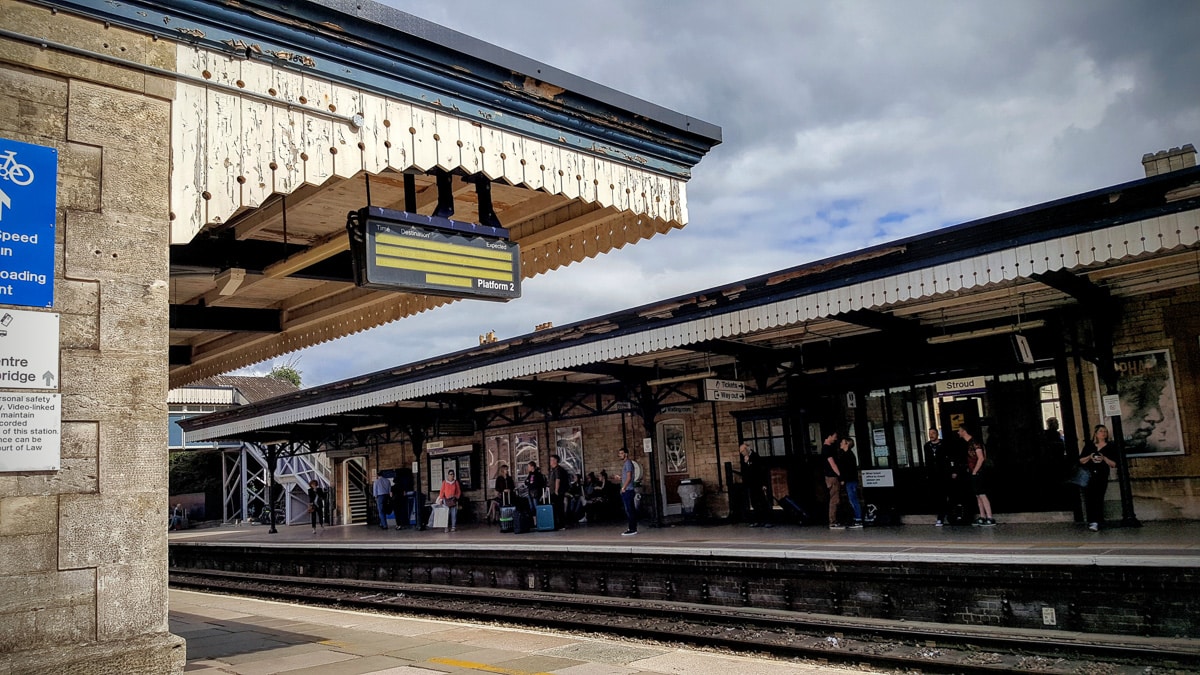 When the departure day arrived, our backpacks were packed and we were ready to go. We arrived at the train station with time to spare. As we sat down to wait the 15 or so minutes before our train was scheduled to arrive, an announcement informed that due to a shortage of crew our train was cancelled.

Fortunately, the next train was only an hour later and was on time. The short journey to Cheltenham was uneventful, as was the bus ride and short walk to the charming Crossways Guest House, where we were warmly welcomed by owners Lyndsay and Mark before striking out to look around the city. 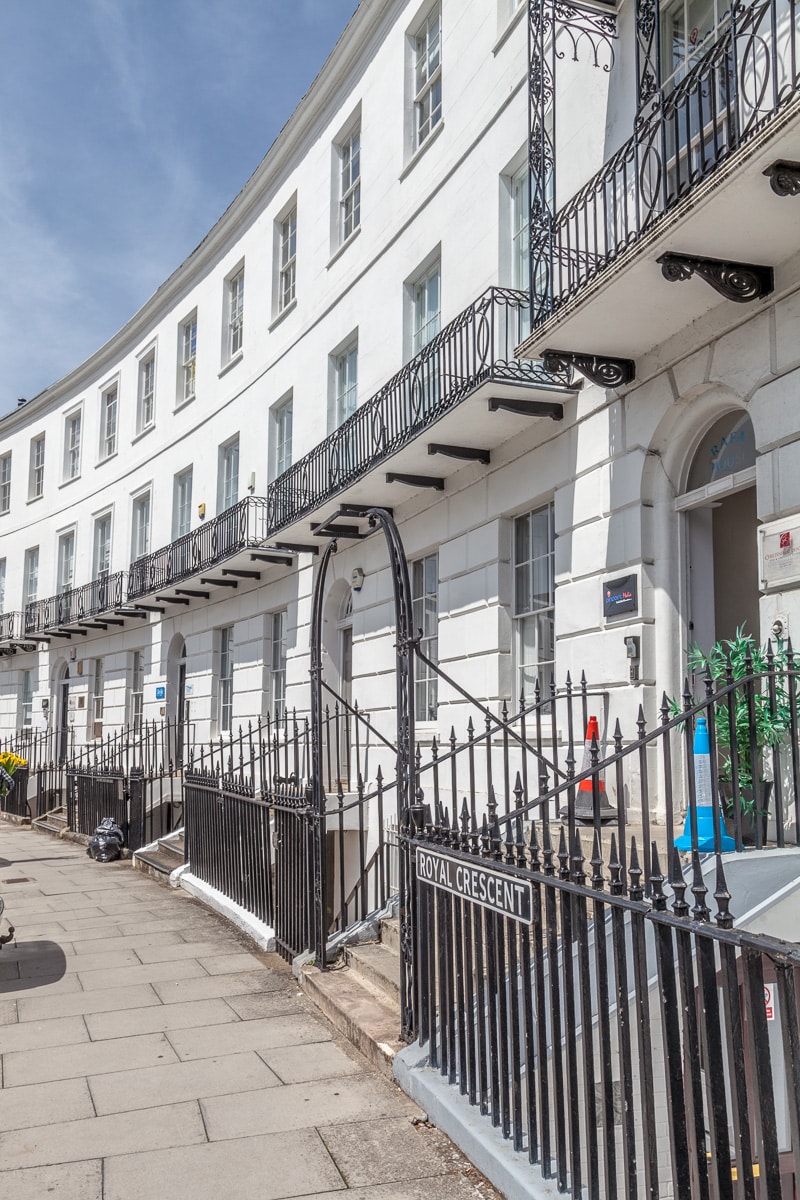 As rain is always a possibility, especially if there is a cloud in the sky, we took an umbrella. Lunch was the first order of business, and we had reservations at The Spice Lodge, which it turns out was only a block away. After a wonderful Indian lunch we headed into town walking along the Promenade.

Our destination was the Gustav Holst Museum, housed in the house where composer, best known for his orchestral suite The Planets written between 1914 and 1916, was born. It was a fascinating glimpse into turn-of-the-century life, but even more interestingly into the life of the man whose music has influenced the soundtracks of sci-fi films such as Star Trek, Star Wars, and countless others.  Of course, his other works were significant in their time as well, but The Planets are what made his mark.

It was raining as we emerged from the museum, and we were glad we brought the umbrella. Returning to our room, we took our time getting ready for the evenings performance. As the appointed time approached, we made our way to the theater, stopping for a beverage along the way. 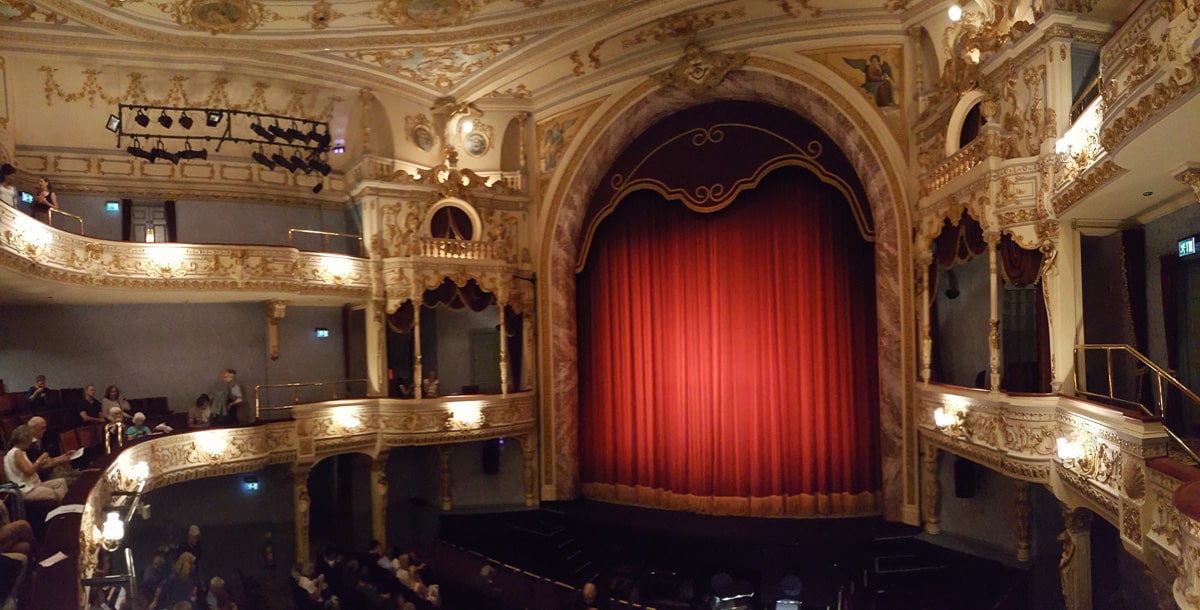 As we entered the “Everyman Theater,” we were enchanted by the relatively small and intimate 694-seat theater that was built in 1891. The Rococo style interior was elegant, and it appeared that practically seat had a good view.

The performance by The New English Ballet Theatre was excellent. The choreography was contemporary and modern with occasional nods to the classical style. Starting with two works by choreographers Daniela Cardim’s ‘Vertex’ and Valentino Zucchetti’s ‘Enticement’s Lure’, with music by Rachmaninov and Brazilian composer Camargo Guarnieri, the evening featured a premiere of Jenna Lee’s choreography for ‘The Four Seasons’, to a recomposed Vivaldi score.

It was a wonderful performance, but after it was over we realized that we were hungry. However, 22h00 (10pm) on a Sunday night is a difficult time to find something to eat, but luckily we found a newly opened pizza place and as the final customers of the evening, closed them down after having a delicious meal, then we returned to our B&B. 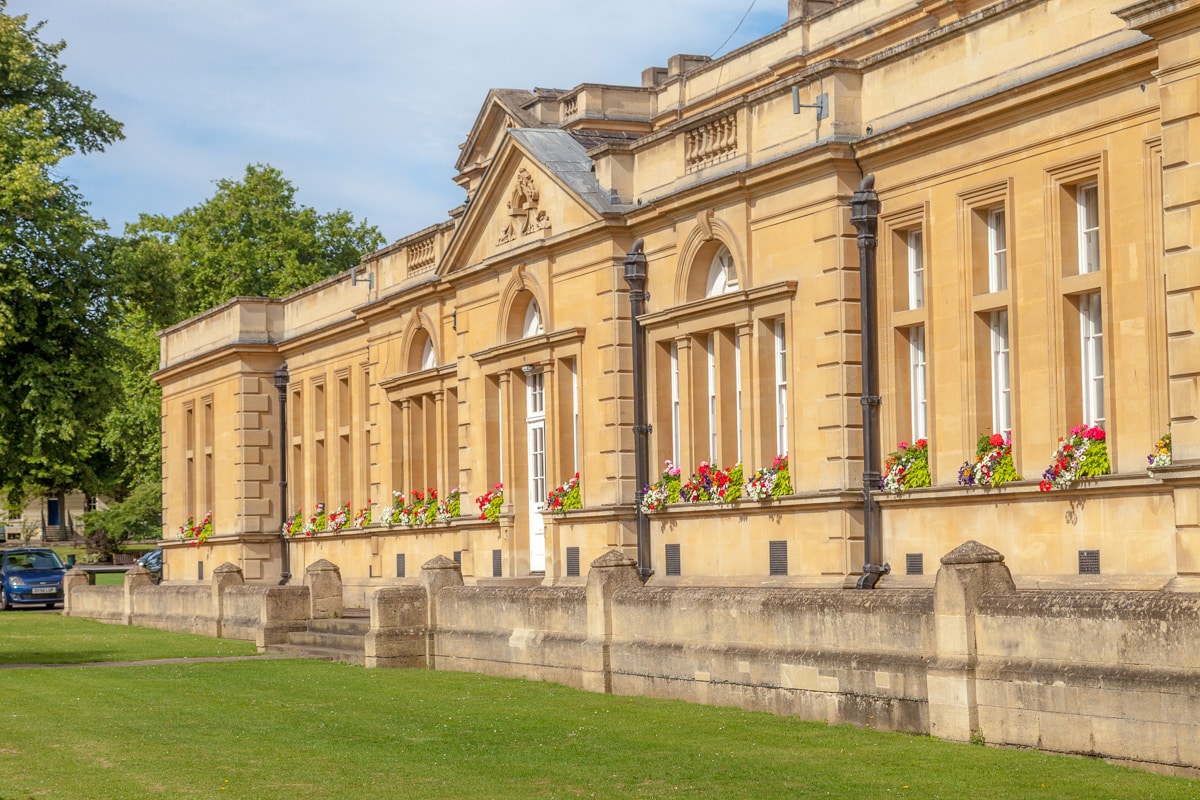 We slept very well, and after a great breakfast‎, we made our way to The Wilson, Cheltenham’s Art Gallery & Museum. We were especially drawn there because of their Arts and Crafts Movement collection that contains a remarkable array of furniture, pottery, silver, metalwork, jewelry, plasterwork, leatherwork, books, textiles and more.

As a larger town, the opportunities in Cheltenham appealed to Jeannie’s need to do more than just window-shopping. So, after touring the museum, we took off in separate directions. 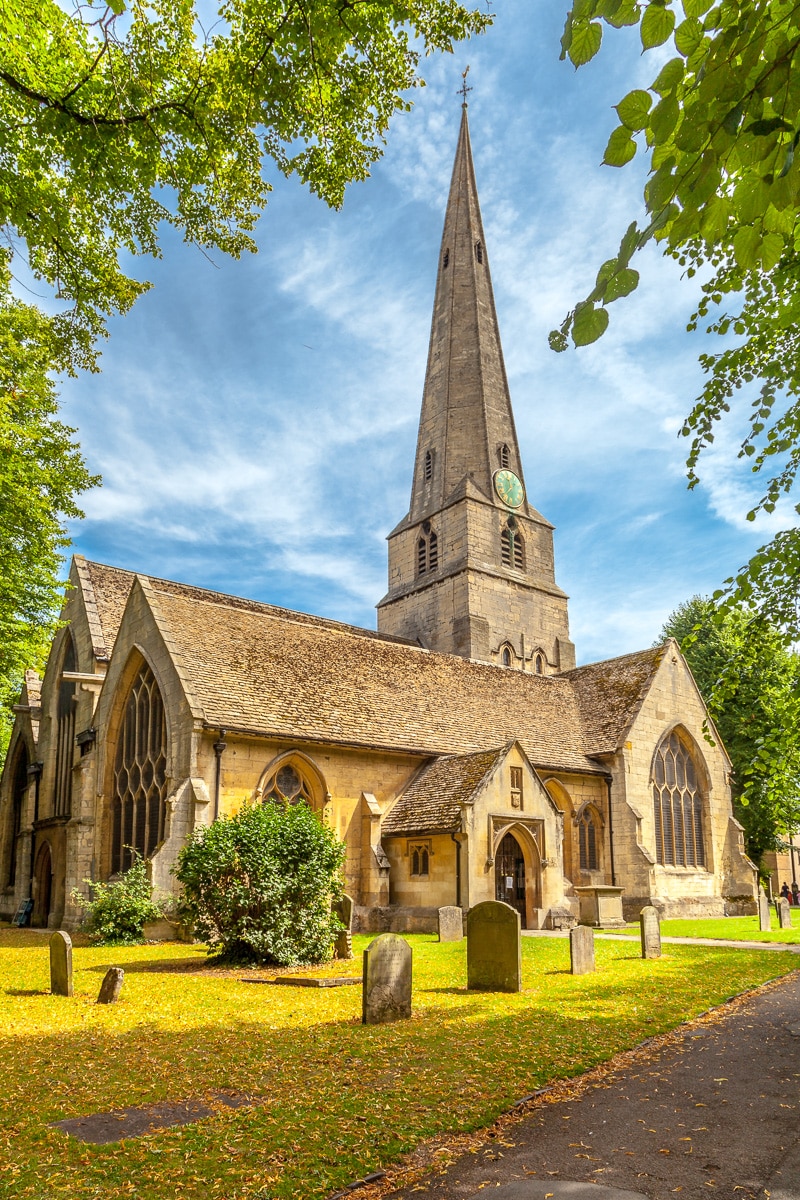 After pointing Jeannie toward the shops, I went off in the opposite direction, and nearby came across the Cheltenham Minster, St Mary’s. The only surviving medieval building in the town, it has been in continuous use for 850 years.

The small stone church sits in a quiet churchyard surrounded by large and relatively modern buildings. Ancient gravestones stand about the nicely manicured grounds with large trees providing shade and adding to the feeling of being further in the countryside.

As I went to the side entrance I discovered a sign that indicated that the church was closed due to maintenance. Disappointed that I wouldn’t be able to see the interior of this charming chapel I continued to walk around the exterior.

As I turned the corner toward the main door I saw two vans parked just in front. The sides of the vans read: Whites of Appletons – Church Bellhangers and TLB Services – Church Bell Specialists. So, I knew that I should investigate further. As I looked into the open doors of the church, and to my amazement, lined up along the central aisle were bells, large bells. 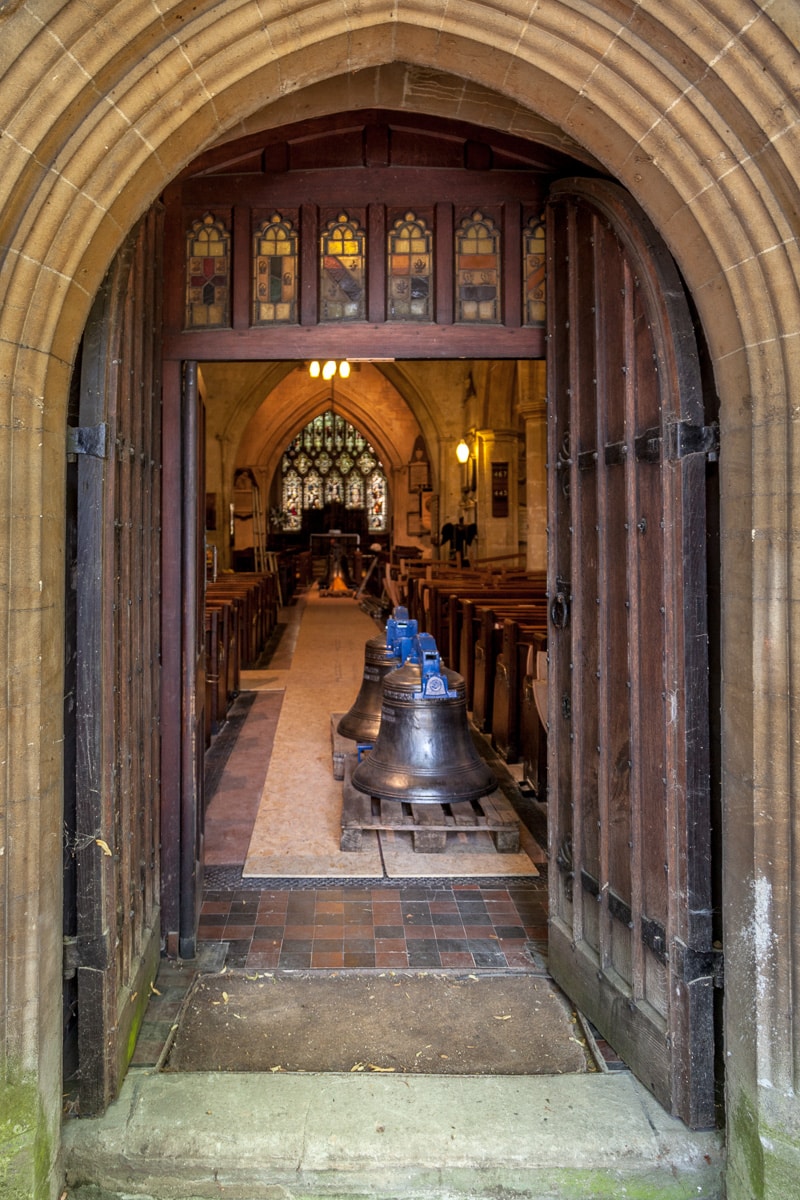 As I stood there admiring the sight, a woman who was standing inside urged me to enter but to just be careful as they were in the process of replacing the church’s bells. She explained that they were replacing 12 old bells with 13 new ones, from the 459.2 lb treble to the 2374.4 lb tenor. The wooden wheels that are used to swing the bells were all sitting in the pews awaiting mating with their bells during the installation process. It was quite a sight, one that occurs only rarely, and we hope to return in August to hear them.

For those who are unaware of the practice of “change ringing”, this article in the Encyclopedia Britannica explains it well. 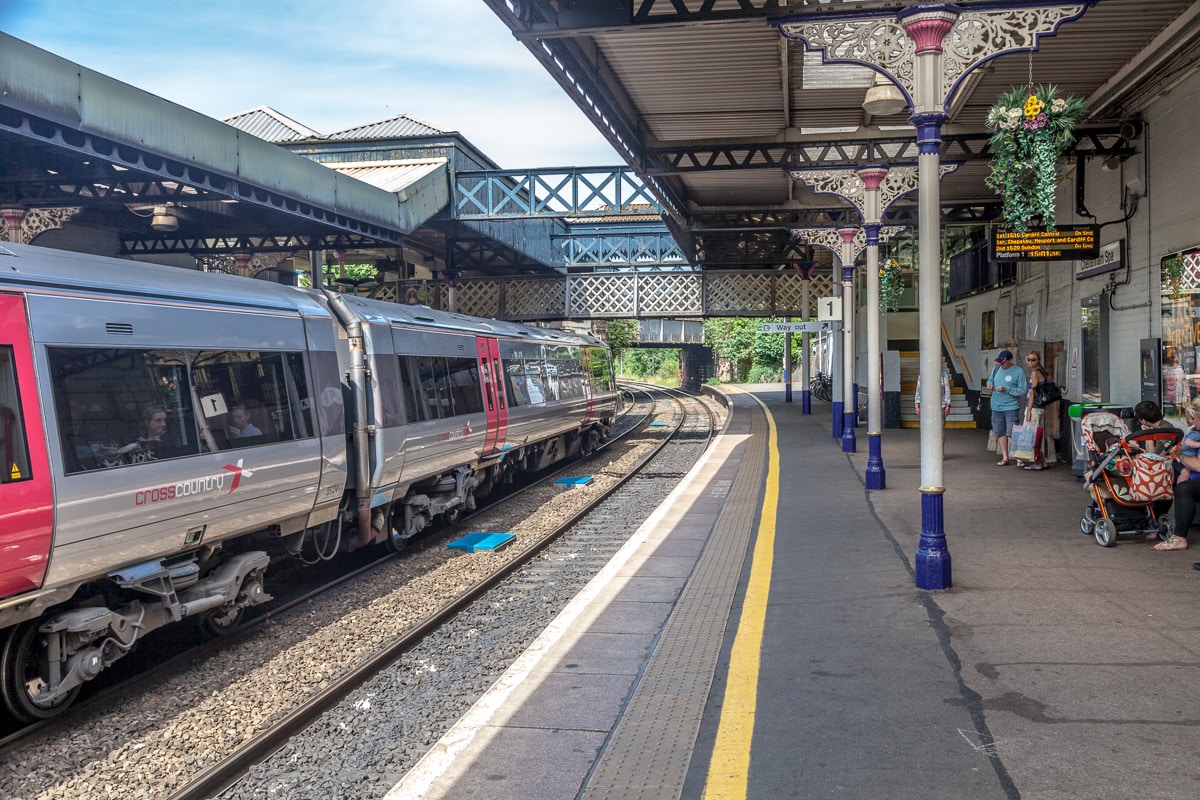 It wasn’t long before I received a text message from Jeannie that she was finished shopping (for the moment), and was looking forward to lunch. So we made our way to a local pub, and ate a fine meal before walking back to the Crossways Guest House to retrieve our backpacks before continuing on to the train station for the return to Stroud and home. With only 24-hours to explore Cheltenham, we knew we would return again … there was much more to see.

We had occasion to return to Cheltenham briefly about two weeks later in the morning for Jeannie to get a haircut. I wandered past the Minster to see the interior without bells on the floor and the related constructions. Unfortunately, the church wouldn’t be open until later, so I wandered the churchyard a bit.

As I was reading some of the gravestones I was approached by a small elderly woman who suggested that if I found them interesting there was one that I must see. She directed me to a large, weathered, prostrate stone with the curious inscription (since a good portion was unreadable, I did some research to clarify the text):

To the memory of 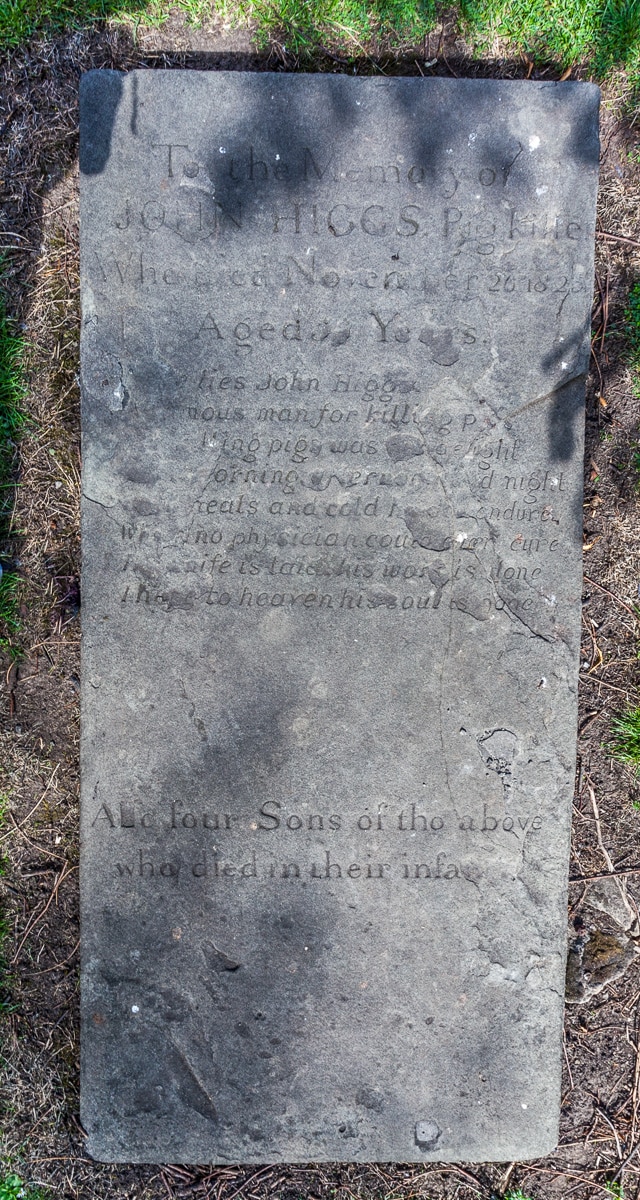 JOHN HIGGS Pig Killer
Who died November 26, 1825
Aged 55 Years
Here lies John Higgs
A famous man for killing pigs.
For killing pigs was his delight
both morning, afternoon and night
Both heats and colds he did endure
Which no Physician could e’er cure;
His knife is laid, his work is done,
I hope to heaven his soul is gone.

Also four sons of the above
who died in their infancy

There was something else rather curious about John Higgs grave. It seems that the butcher’s final resting place has quite a following amongst Japanese tourists. No one is quite sure why, but you can read the newspaper account here.

Click on any image thumbnail for a full-screen view.