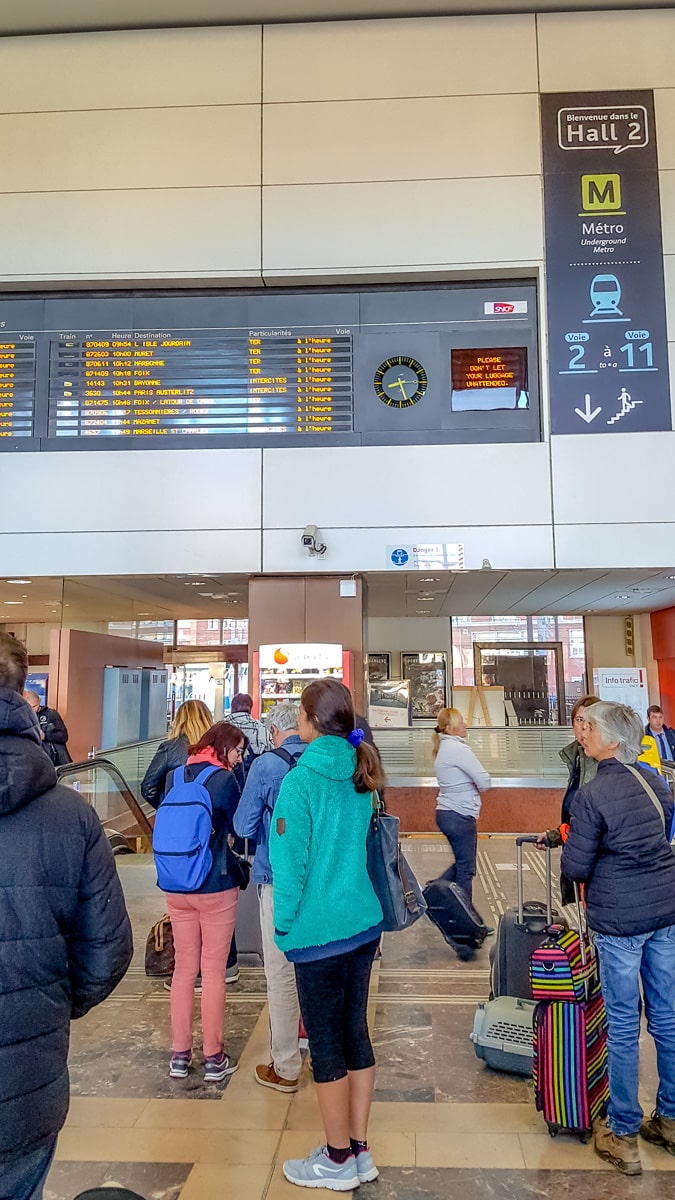 We were looking for another day trip out of Toulouse and had been evaluating several options, but Foix (pronounced fwa ) kept popping up. Easily accessible by a one-hour train ride, it was in the piedmont of the Pyrénées, small enough to enjoy in a day, and had a well preserved ancient château or castle right in the center of town.

The train briefly followed the Garonne river south to where it joined the l’Ariège river, then the route kept along that river’s valley toward the Pyrénées mountains. The massive, snow-capped Pyrénées rose abruptly from the flat farmlands and the terrain changed to rocky hills quickly. 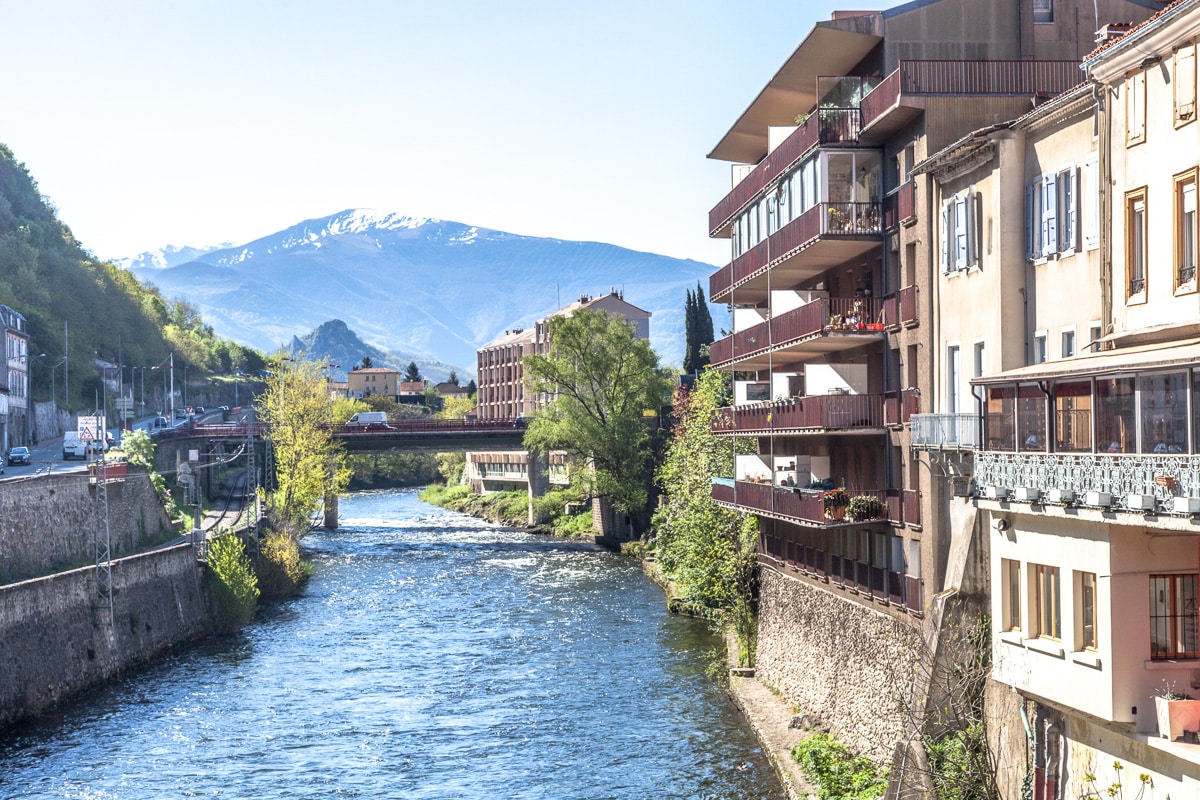 Set deep in the upper Ariège valley, Foix seemed a strategic location to build a fortification. Indeed, it was the Romans who first built a fort on the rocky hill where the Château de Foix castle now overlooks the town.

Since it was still early, we decided to head directly to the Tourist Information office. The young man there was very helpful, and recommended that we take the hiking path up to the Terrasses du Pech since the view from the mountainside is especially nice in the morning light. 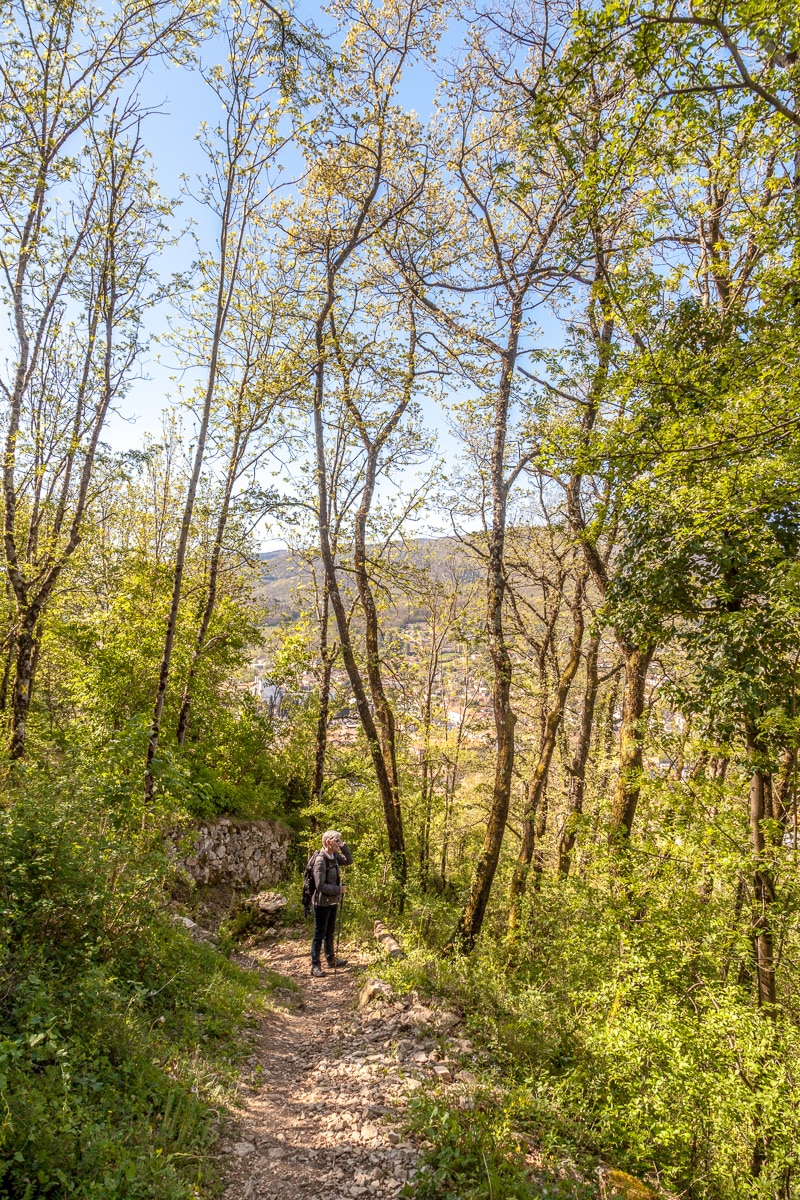 It was a demanding rocky hike up with multiple switchbacks and lots of loose gravel; but every now and then we would come across an opening between the trees and the view over the town with its castle in the center was enchanting. The weather was wonderfully cool, and we stopped several times to enjoy the wildflowers, especially the terrestrial orchids that were popping up here and there. By the time we needed to turn back for town and lunch, the views over the valley and Foix were spectacular. To the south were the Pyrénées , still impressively snow-capped. 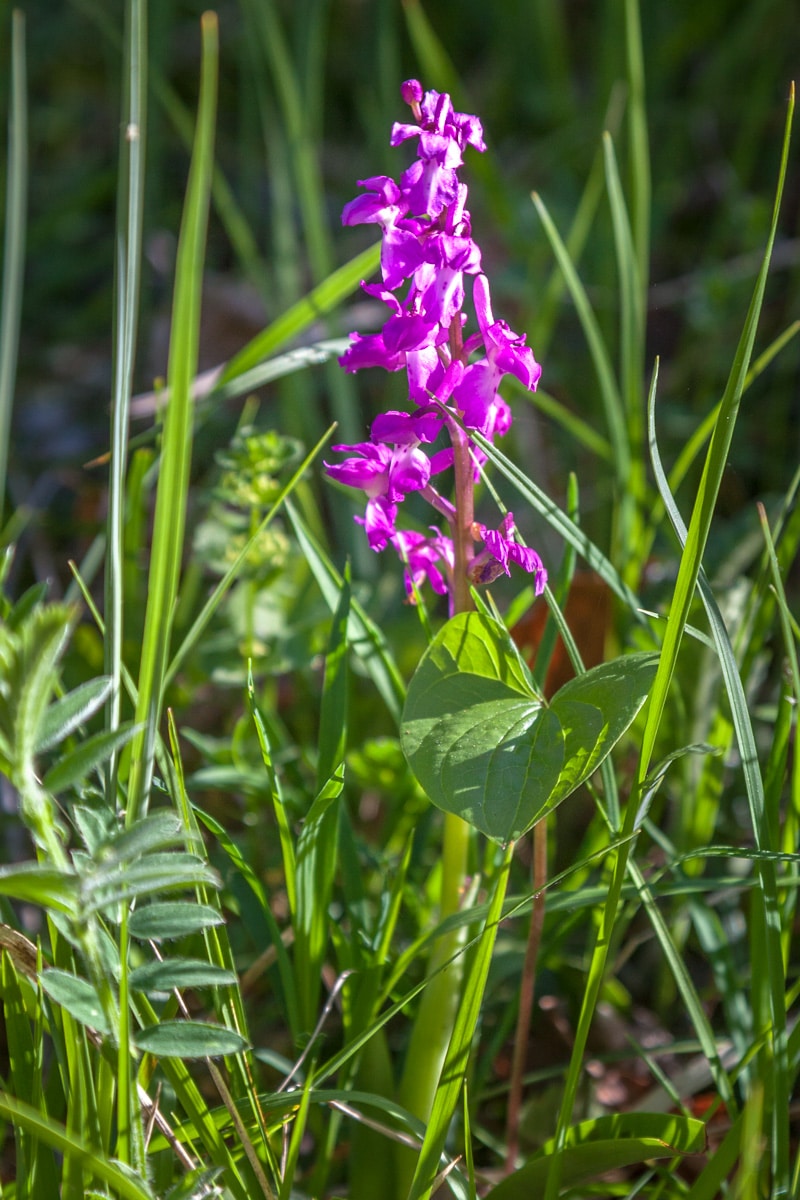 The return was by way of the same trail, but the descent was a bit slower due to the loose stones. Still, we made it down without incident, enjoying being out in nature with the trees, beautiful flowers and singing birds. And we had worked up quite an appetite.

After a little searching we chose Le Jeu de l’Oie, a small local restaurant that Jeannie had found online the night before that sounded good, and it was. We were seated upstairs and were delighted with a delicious meal surrounded by locals in a charming atmosphere. Fortified, we took off for the castle.

In the year 849, Charlemagne (747–814) founded a chapel in the small town of Foix that became the Abbey of Saint Volusianus. The notoriety allowed continued development into the 10th and on through the 12th  centuries. 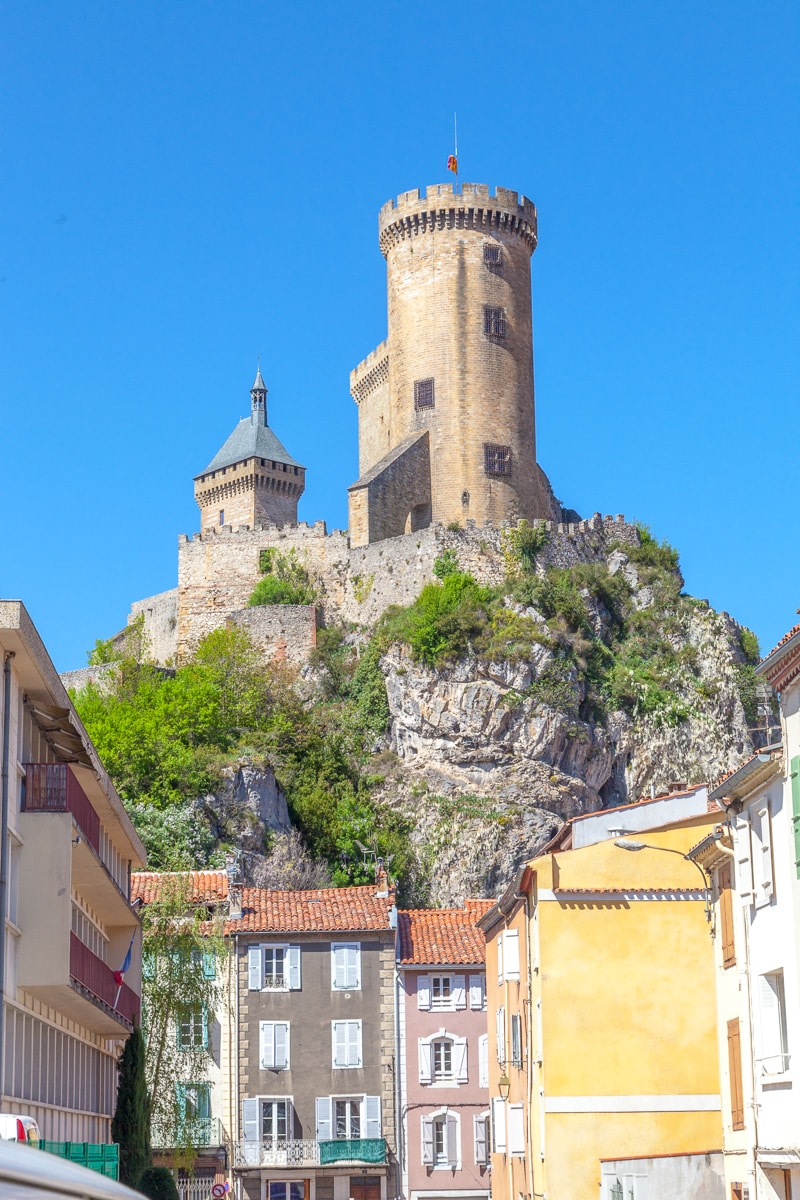 The current castle, whose foundations date back to the early 10th century, withstood the repeated attacks between 1211 and 1217, during the Albigensian Crusade. The castle, however, eventually surrendered and by 1290, the city was practically abandoned. By the sixteenth century the castle had lost its military purpose, and was then used as a prison until 1864.

The castle has been well preserved and restored with a number of museum-style exhibits inside the towers. There is a lot to see and though it has many steps to not only get to the castle but also to explore the grounds and climb the two (of three) towers that are accessible, it was well worth it.

After storming the castle, we wandered the town some more before visiting the Abbatiale Saint-Volusien. This former abbey was certainly worth a visit. 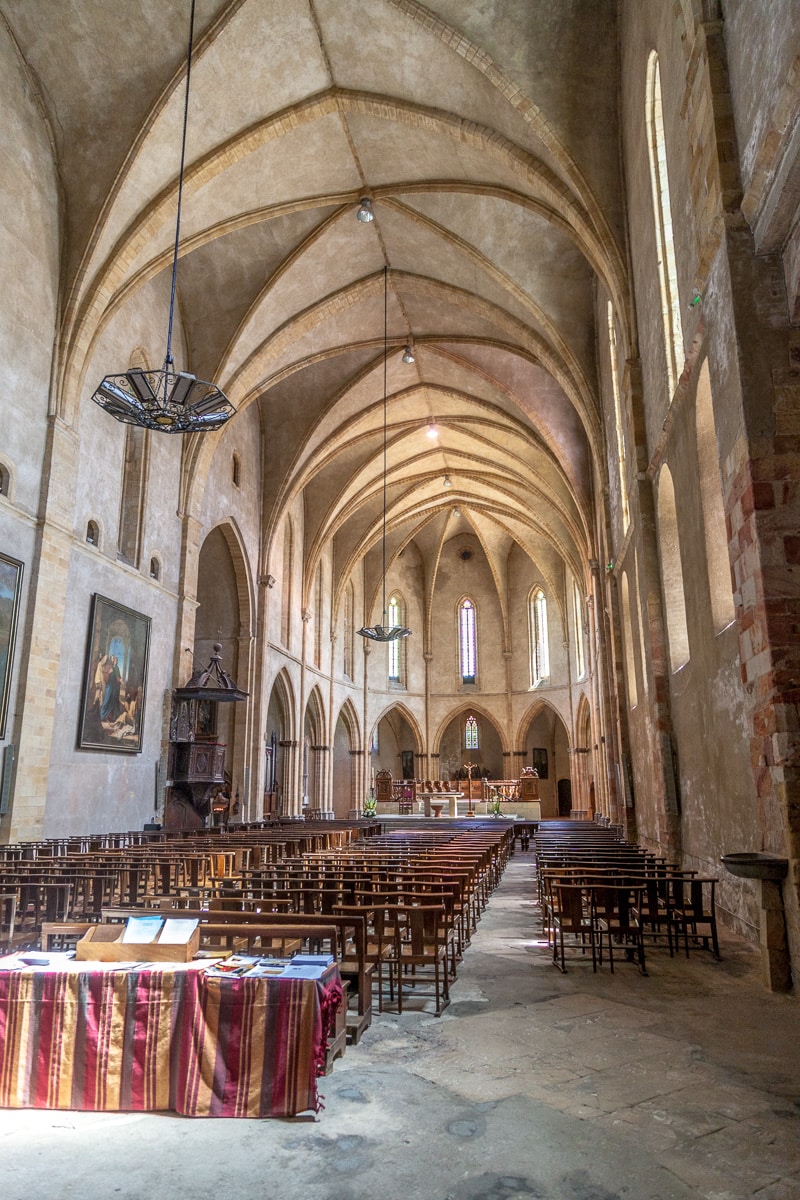 The church was destroyed by Protestants during the wars of religions, then by Catholics, then during the Revolution the building was seized and the prefecture was set up there.

Today, only the abbey church remains. The portal is Romanesque (c. 900–1200), and the rest of the building is from the 14th–17th centuries. The Place Saint-Volusien was, for centuries, the active center of commercial life in Foix, and has remained so to this day.

It was approaching time to leave for the train, but we paused for a spell to have a coffee at a cafe on the Place Saint-Volusien. We watched the people passing through thinking of all of the footsteps that had been made over the centuries in the very spot we were watching.  Afterwards we quietly made our way back to the train station for the return journey to our century and home.