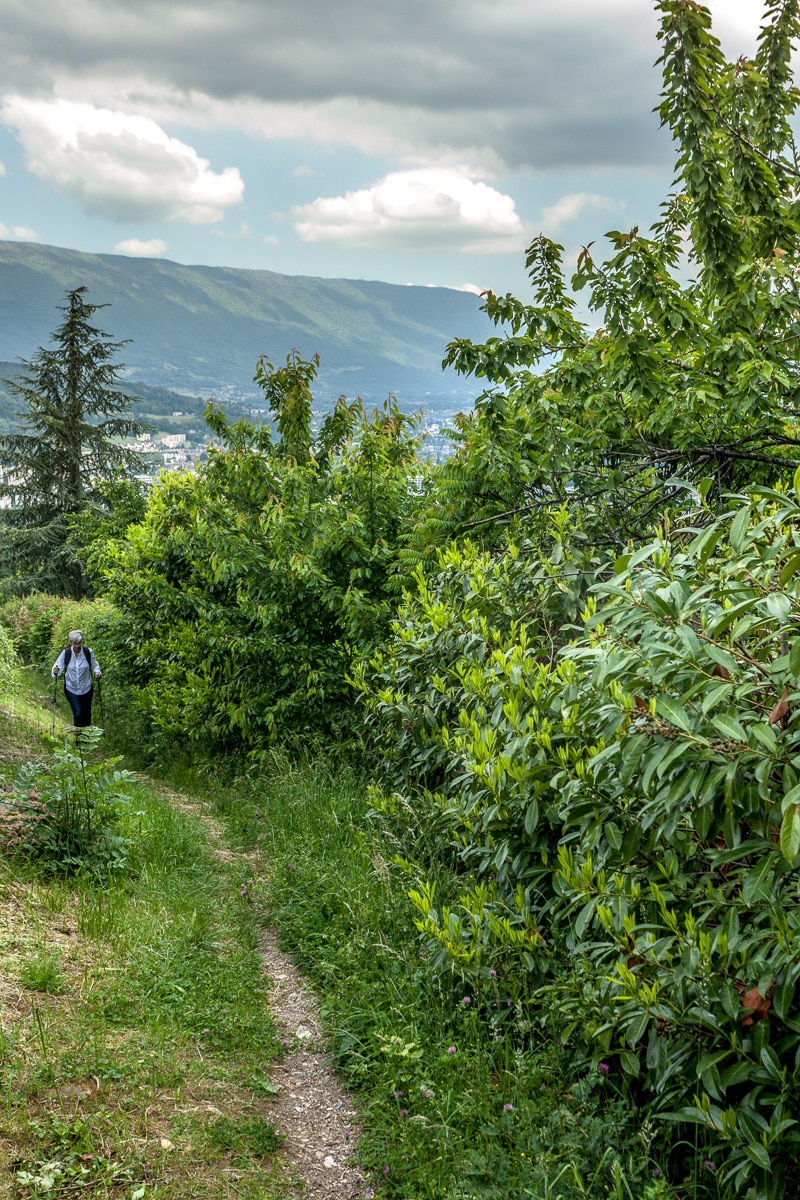 At the crossroads of ancient routes through the Dauphiné, Burgundy, Switzerland, and Italy, Chambéry lies in a wide valley between the Bauges and the Chartreuse Mountains on the Leysse River. We wanted to get out for a hike in the forests again, and our research indicated that there were some nice green areas near Chambéry that were accessible by public transport.

Only 100 km (62 mi) from Lyon, the train ride was about one-and-a-half hours. After a quick walk to the tourist information office, we made our way to les halles de Chambéry, the indoor market. There we purchased the ingredients for our lunch: slices of herbed ham, Comté cheese, and some bread. We had brought along a couple of clean bandanas and a knife, and had water in the backpack.

The weather started out clear and sunny, but as we stepped off of the bus that we took to the trail start, puffy clouds had begun to provide some shade. Standing on the corner studying our map, we were approached by a woman, who began speaking to us. Hmmmm. Unable to readily understand what she was saying, I said, “Je suis désolé, je ne parle pas français.” She quickly smiled, and slowed down, and we understood that she was asking if we were going to les Cascades or waterfalls. Indeed, as that was where we wanted to go, she kindly gave us directions as to where to turn, and with another smile said “Bonne journée, au revoir.” 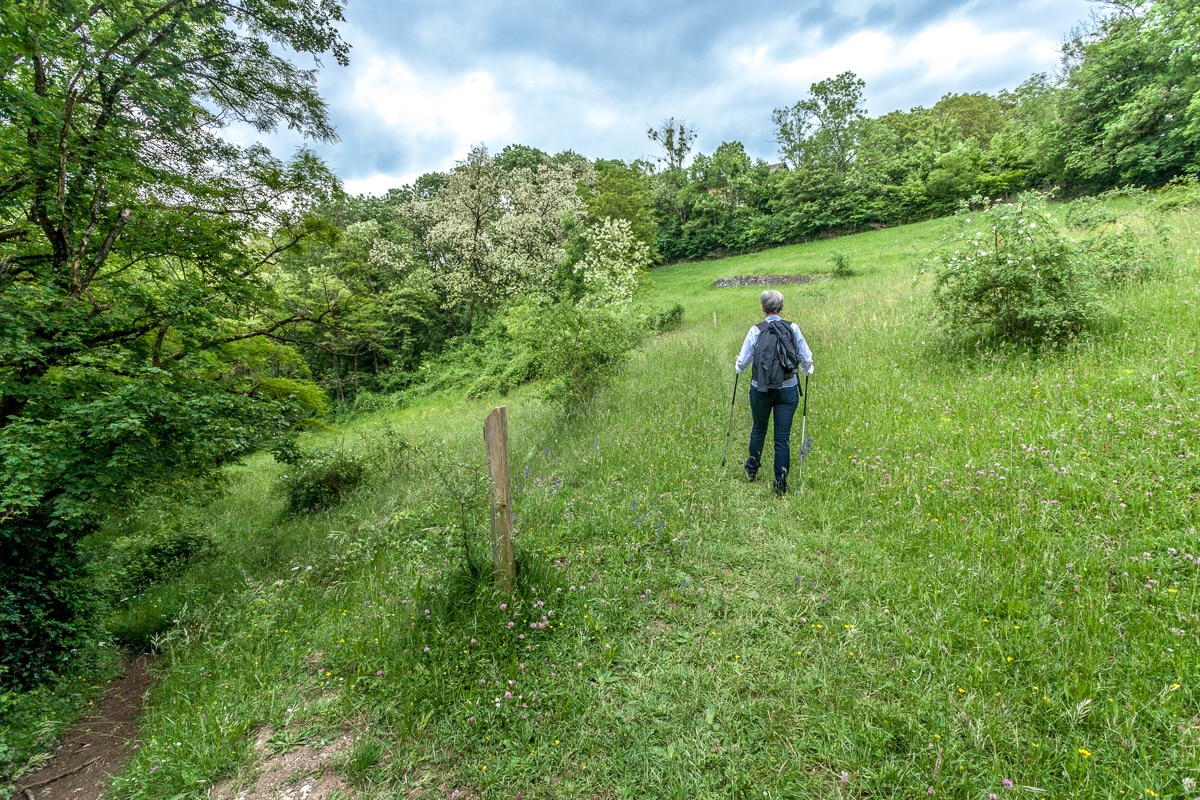 As we found our way to the start of the trail, the sound of the small brook coming down from the hills joined the wind-rustled leaves of the trees and the songs of the birds to welcome us into the cool, bright green forest. The sun had reemerged, and the bubbling stream indicated that we were to be walking uphill along most of the trail. Walking past many small waterfalls and natural pools, we had found just what we were looking for, a beautiful day out in nature. A wooden bench along the way provided an ideal location to eat the delicious provisions we had purchased earlier and the sound of the stream beside us made for a relaxing place to sit and enjoy the warm sun. 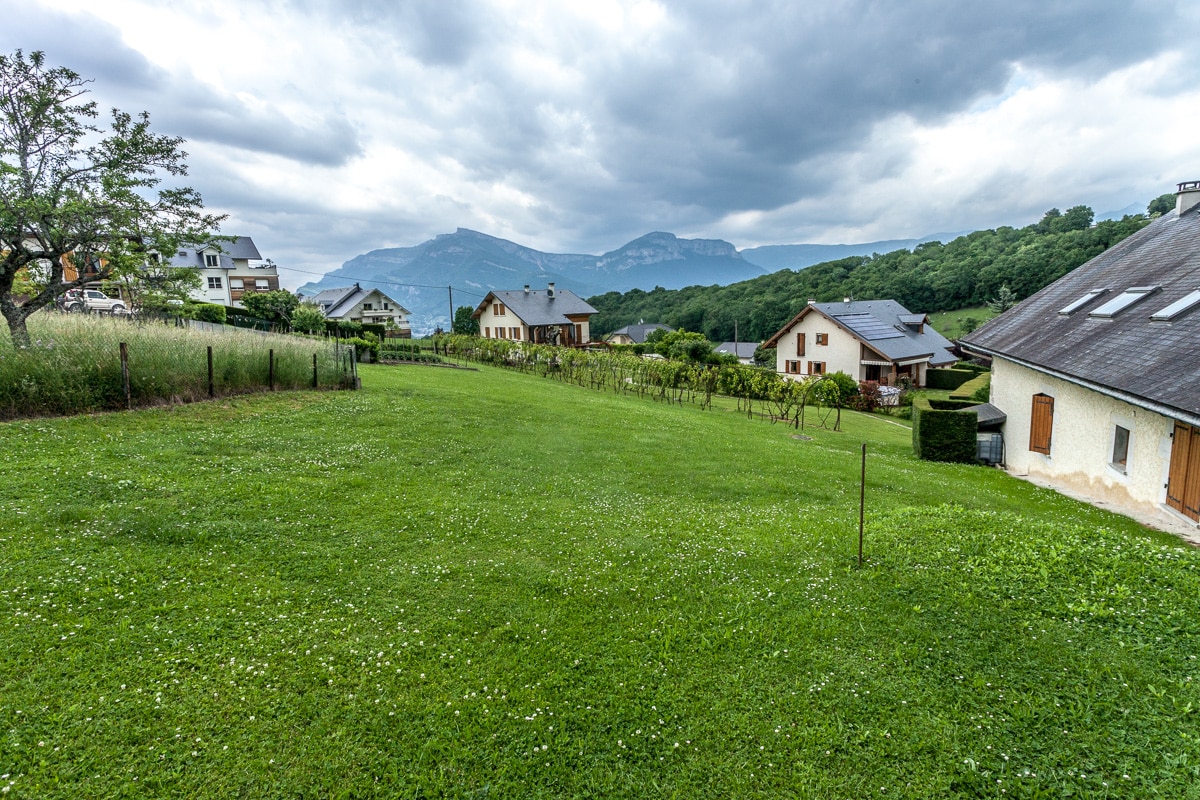 Along the way there were larger waterfalls and cascades, and though the area was crisscrossed with other trails we had only a few places where the trail markings were unclear. The path went from deep forests to country roads, from small neighborhoods to flowered meadows, and all the while climbing higher. The views of the surrounding countryside and mountains were stunning as we finally began our walk down through a small village back towards Chambéry. 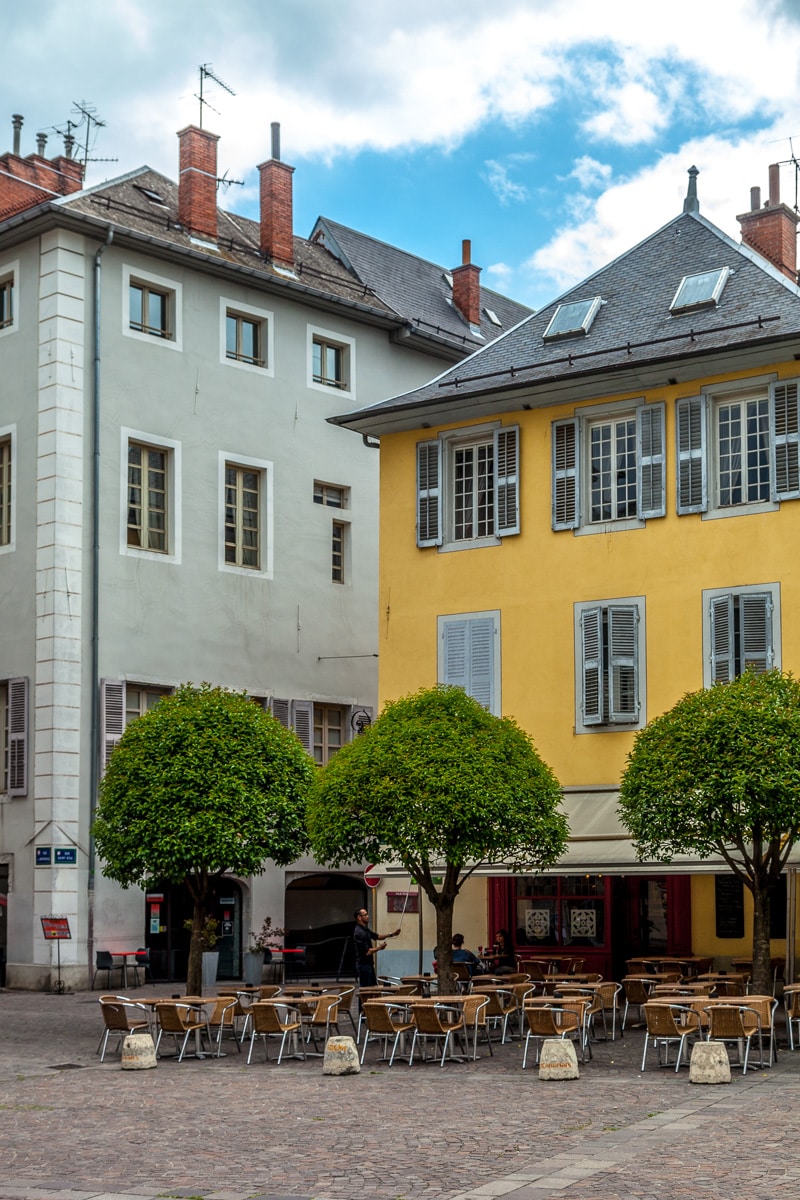 Again taking the bus back into town, we stopped at a small cafe to boost our energy levels, and had plenty of time to explore before our train departed.

Though the area had been occupied since neolithic times (4000 BC), in the 8th century, the territory that would later become known as Savoy was part of the Kingdom of the Franks. Chambéry grew until it appeared as a small city, Camberiaco, in the 11th century. The city continued to prosper as capital of the feudal territory of the House of Savoy during the 11th to 14th centuries. Savoy and Chambéry continued to be associated with many competing spheres of influence until it was annexed to France in 1860. Though the city was heavily bombed during WWII, there is little evidence of the significant damage it caused.

With such a long and varied history, walking through the town was a delight, and once again too short a time to see all that there was to see. Yet, I would rather leave wanting more, than to have stayed too long and wanting to leave. WP