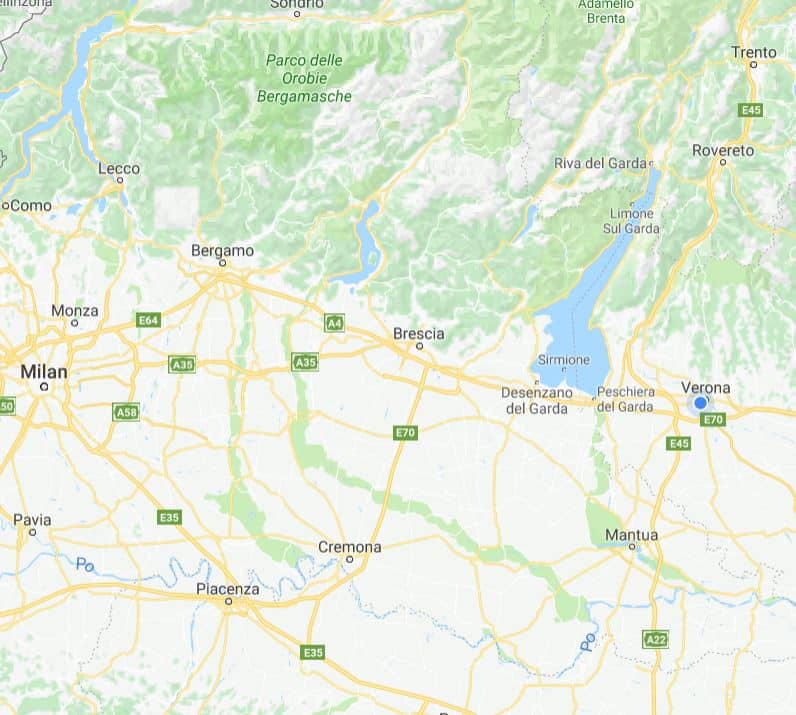 Brescia (pronounced BREsh-ya) was founded over 32 centuries (3,200 years) ago. Known as Brixia in ancient times, it has long played an important role in the region.

Its function as a primary manufacturing center tends to overshadow its significant contributions to history and art. Besides two steel mills and a large building materials sector, Brescia is important in the production and distribution of machine tools, motor vehicles such as Iveco trucks, and weapons production, including the well-known Beretta. 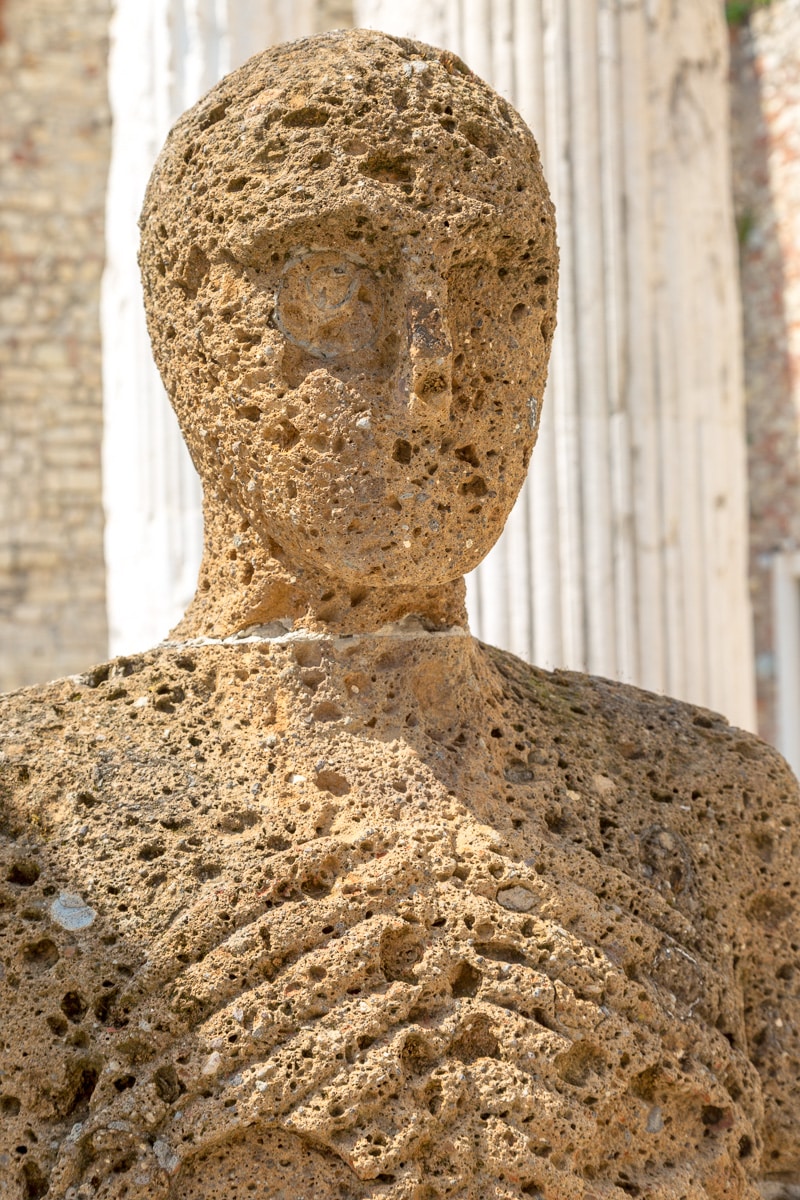 However, Brescia is much more than an industrial town. It is home to an important collection of 2000-year old Roman ruins, the largest in northern Italy, and an impressive fresco-filled museum that fills the corridors of a huge medieval monastery. Those are just a couple examples in a vast array of architecturally significant churches, buildings, and museums.

We arrived by train somewhat early, and our plan was to first visit the Castle of Brescia, though on our way we passed through the Piazza Paolo VI (named after Pope Paul VI who was born in a nearby small village of Concesio). Formerly called the Piazzo del Duomo, it is dominated by two very different churches. 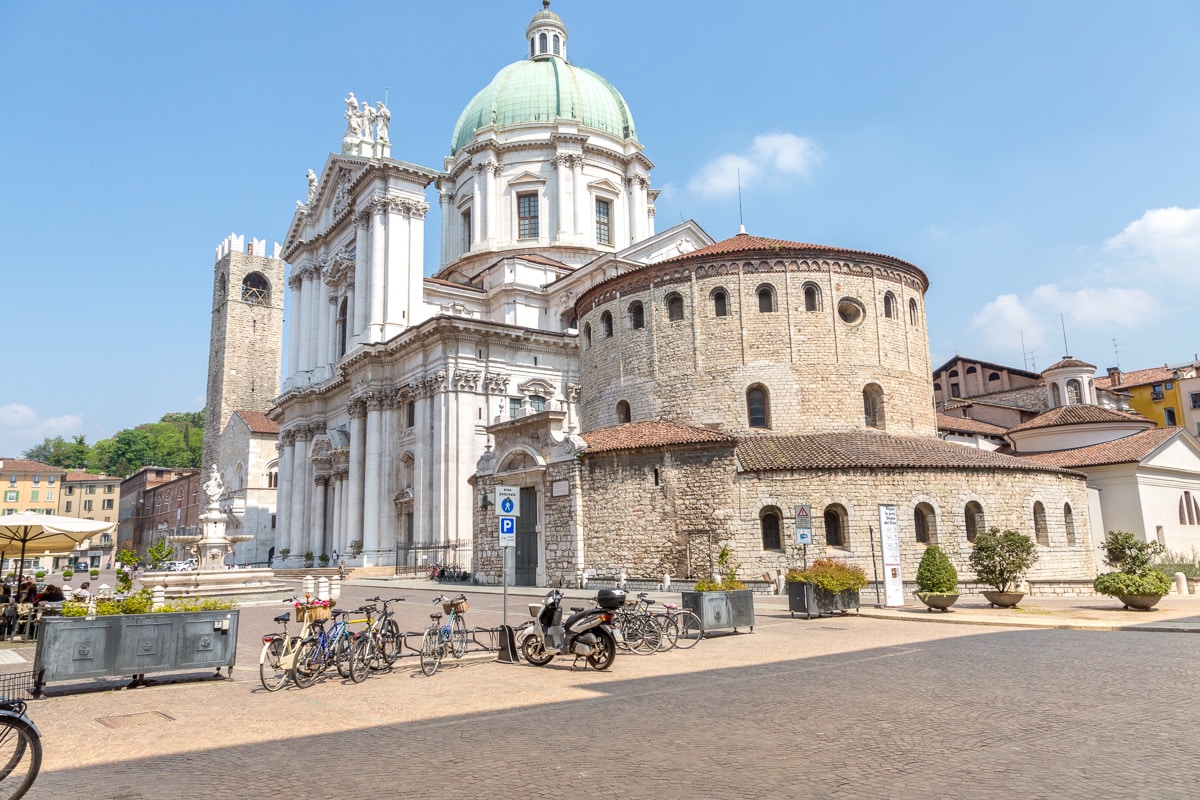 The New Cathedral or Cathedral of Santa Maria Assunta, whose construction began in 1604 and was completed only two centuries later in 1805, has a monumental and impressive interior. The Old Cathedral, also known as La Rotonda, stands next to the newer church and is an extraordinary circular, Romanesque church built during the eleventh century.

After a stop for coffee, we began the climb up to the castle. 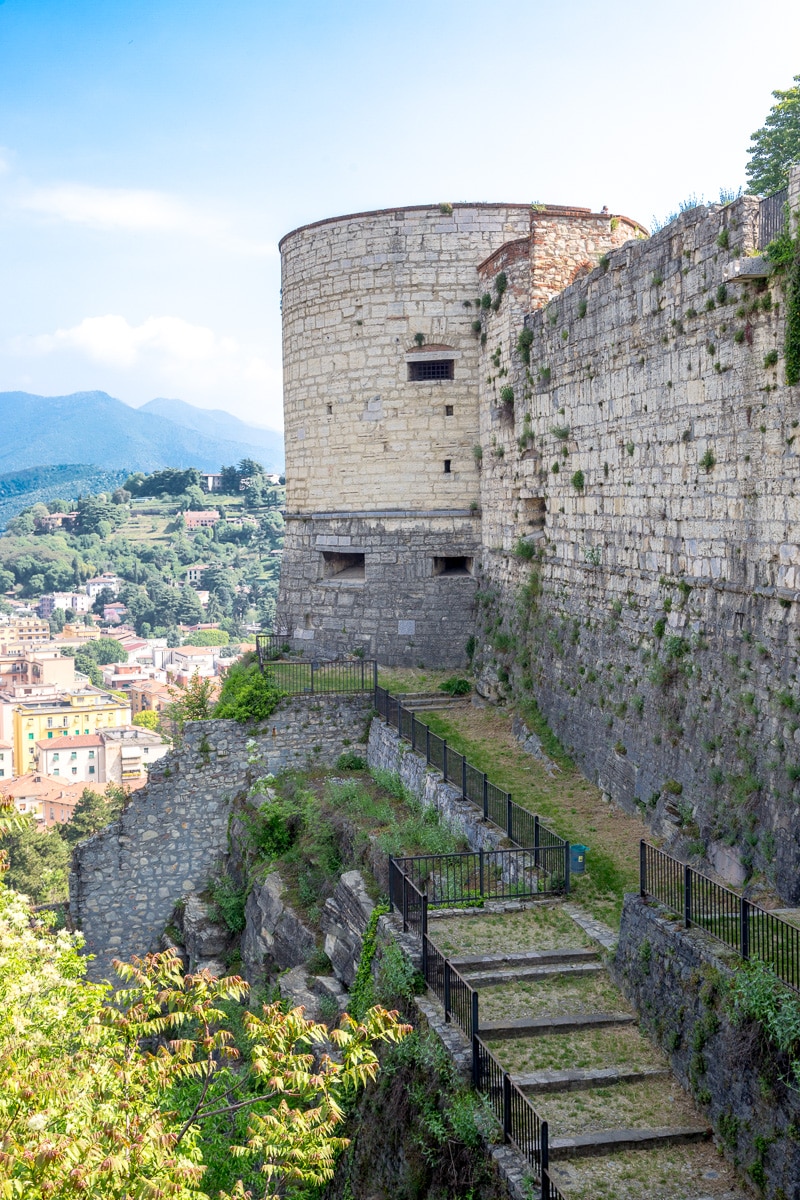 Brescia’s historic old town is dominated by a hill, Colle Cidneo, topped with the rambling Castle of Brescia that was central to the city’s defenses for centuries. Torre Mirabella, the main round tower, was built by the Viscontis in the 13th century.

The fortress got its nickname “Falcon of Italy” due to its position on the hill, high above the city. Its surrounding walls enclose more than 75,000 sq. m. (18.5 acres), and you can see the evolution of military structural techniques that made this castle almost impregnable over the years.

By the time we finished storming the castle, it was time for lunch. Somehow we stumbled across a restaurant Jeannie had read about and had delicious lunches of spinachi gnocchi, and meat-filled ravioli in a butter and sage sauce. Excellent service and great food, what more can you ask for. 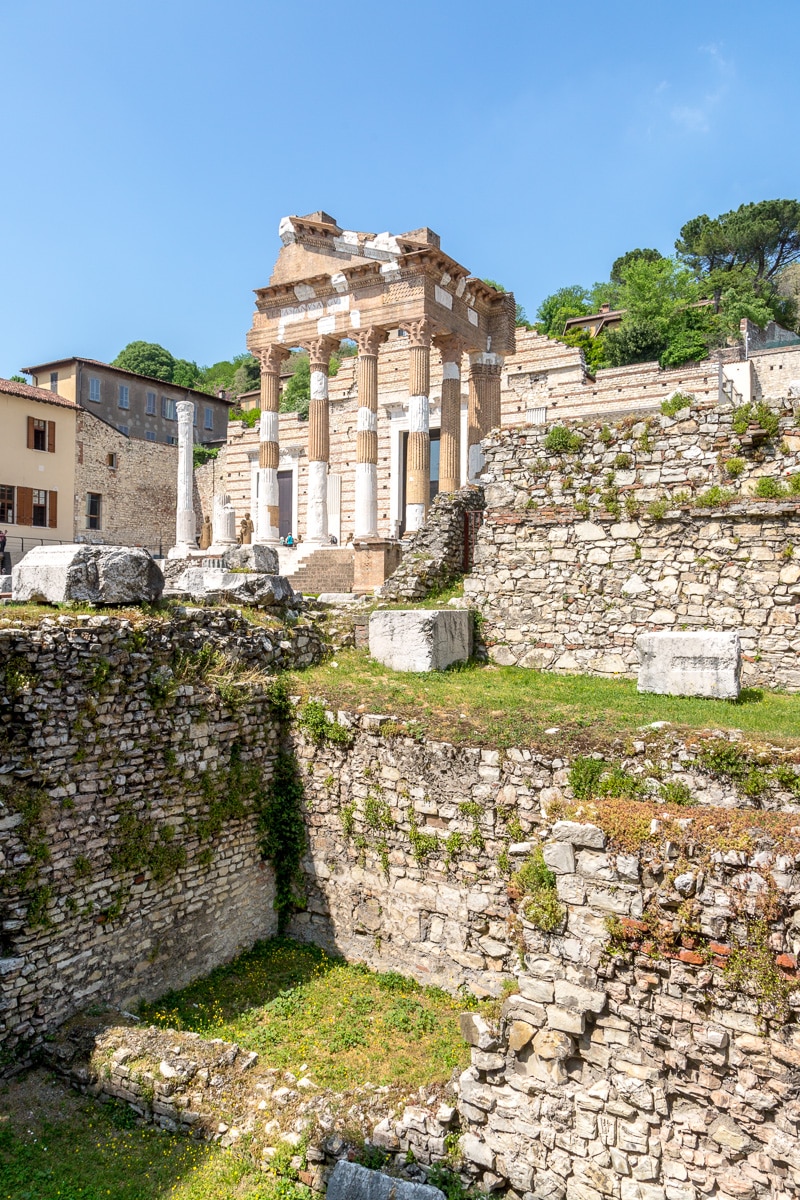 The most impressive of Brescia’s Roman relics are in the Brixia Parco Archeologico, and include the remains of the Tempio Capitolino, a Roman temple built by Emperor Vespasian in 73 AD. Six Corinthian columns still stand before a series of cells. And about 50 m to the east, the cobbled Vicolo del Fontanon leads to the limited ruins of a Roman theatre.

The afternoon was getting hot, and the sun was beating down. It was time to find an indoor museum. We had purchased combination tickets to allow access to both the Brixia Parco Archeologico and the Santa Giulia Museum. We didn’t realize what to expect from the museum, but we were astounded at the size and range of the exhibits, and the building complex that was the former Benedictine convent of San Salvatore – Santa Giulia was founded in 753. 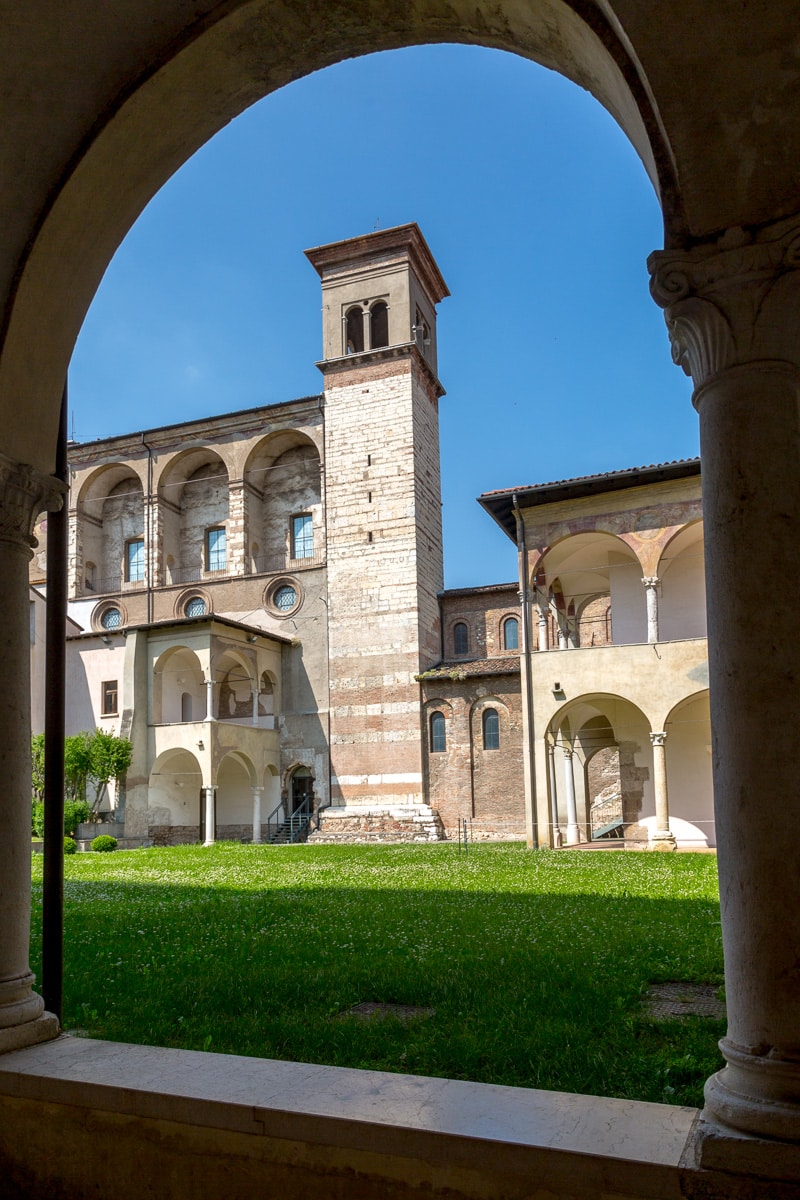 The buildings themselves span centuries, from the mid-700s to the mid-1500s and were ancient, well preserved, and an extraordinary experience in themselves. The museum’s marked directions guided us through history with well-done displays from prehistoric times forward.

The best part for us were the two Roman houses or domus (note the modern words domicile and domestic derive from the Latin word domus) that were discovered beneath the complex between 1967 and 1971, and opened to the public in 2002. Built over an ancient Roman quarter, excavation under Santa Giulia revealed the existence of the domus that date back to the 2nd century BC. 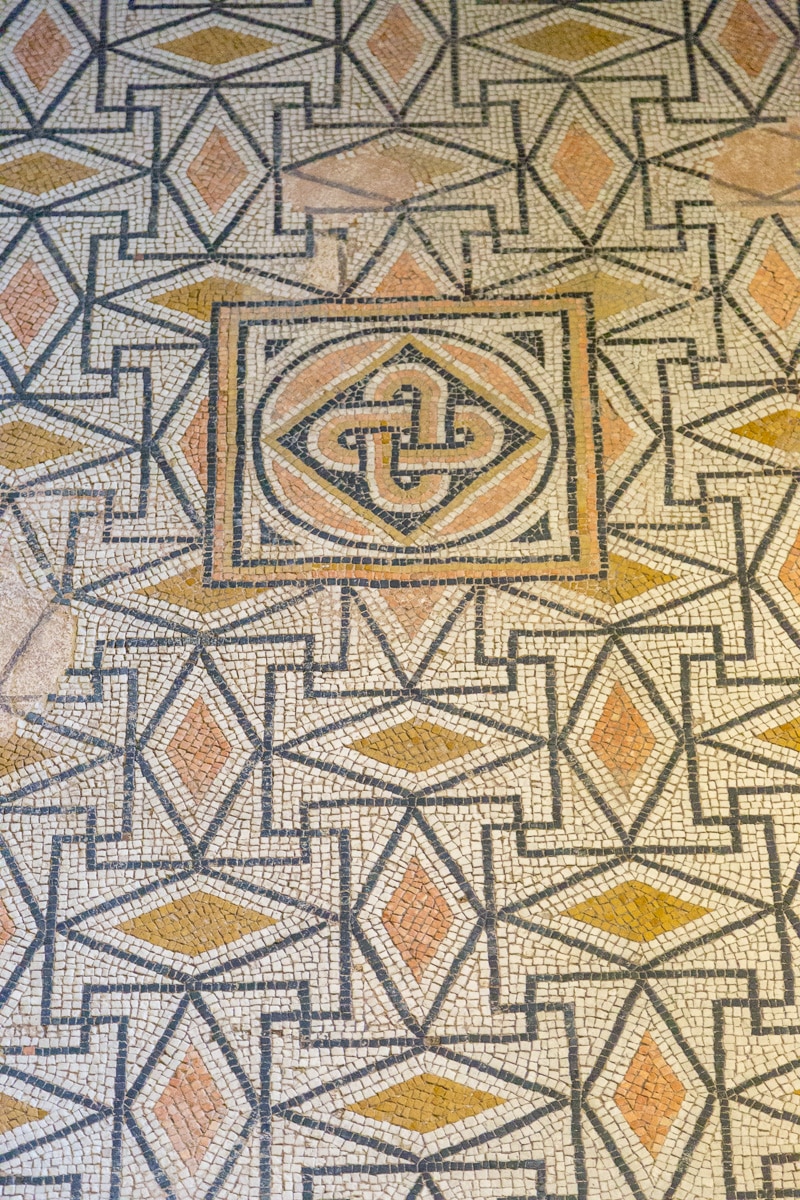 The restoration and display is wonderful, and the quality and quantity of mosaic floors and frescoes is remarkable. We were in the museum well over 2-hours and could have stayed longer.

As we began to make our way back to the train station, we strolled through the beautiful Piazza della Loggia, a Renaissance square surrounded by Venetian-style buildings, some of whose façades are embedded with ancient Roman tombstones, while on the east side of the square stands a tower with a large, mid-16th-century, astronomical clock.

By this time, our feet and legs were tired, and our brains were full. We settled into our seats on the train and the gentle rocking tested our ability to stay awake. It had been a very good day, but we would sleep better later. For now though, it was simply good to be heading home.