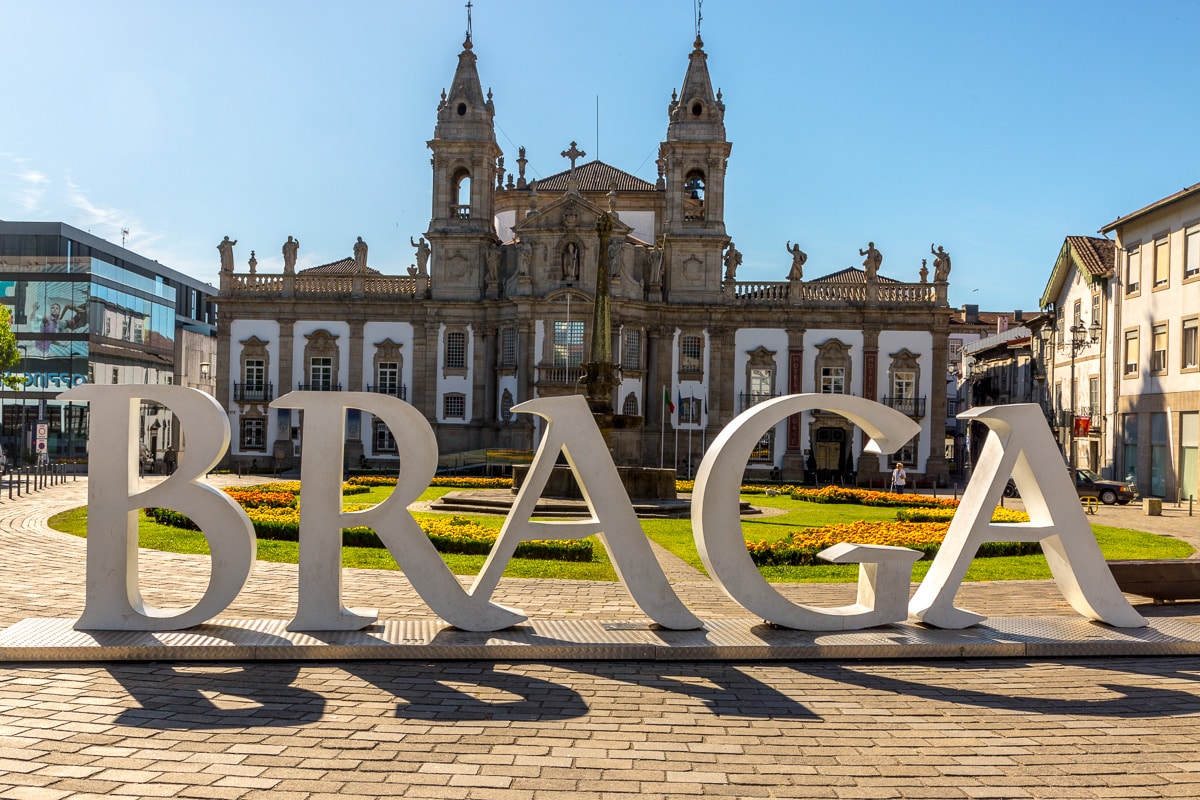 10-11 September 2019 – The alarm on Jeannie’s tablet woke us early to catch the 08h45 train from Porto’s São Bento Station, the originating point for our overnight in Braga. It wasn’t too early, but early enough to get good seats.

One of Portugal’s oldest cities, Braga was built more than 2,000 years ago. “Bracara Augusta” was, as the name indicates, founded by Augustus. The Braga Diocese is the oldest in Portugal with an archdiocese anchored in the 4th century. Today it is Portugal’s third largest city, and despite the richness of its heritage it is a vibrant and youthful city owing somewhat to the presence of the Universidade do Minho. 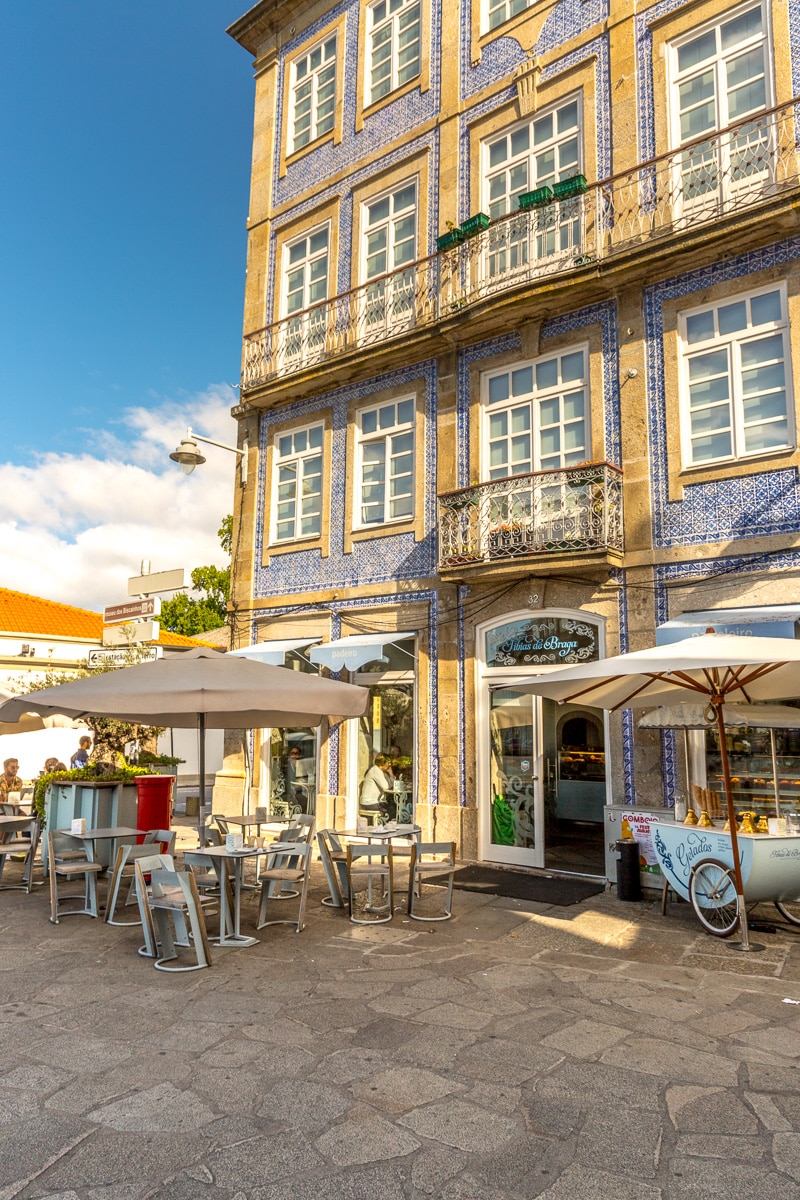 Once in Braga, we quickly located a great café for coffee, a “pasteis de nata” and a croissant, yum. After walking to the hotel IBIS (pronounced ee-bish), we knew the room wouldn’t be ready yet, as it was only 10h30, but we could leave our backpacks. After wandering a bit, we stopped at the TI (Tourist Information office) for a map and other helpful information. Based on their recommendation, we decided to take the bus up to Bom Jesus do Monte, one of Portugal’s most iconic tourist attractions.

Due to impending crowds as the day progressed, we decided to ride the 19th century funicular to the top rather than climb the more than 650 steps. We do know how to pace ourselves, and the day was still young. 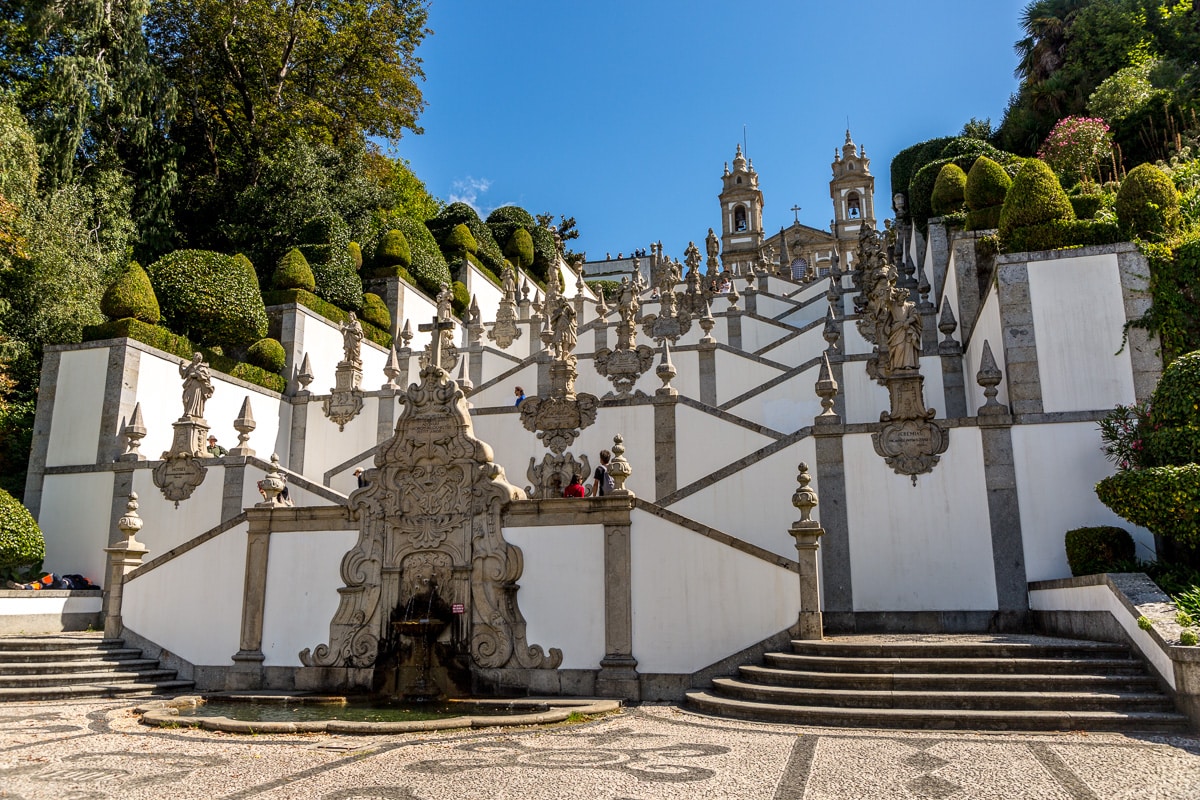 Situated on a windswept, beautiful site, the large, neoclassical church stands atop a forested hill that offers grand views across the city. However, most people don’t visit for the church or even the view. They come to see the extraordinary baroque staircase, the Escadaria do Bom Jesus.

This remarkable staircase is made up of tiered staircases, dating from different decades of the 18th century, with fountains, statues and chapels at every level. It was indeed beautiful, and after lots of wandering around the church and gardens at the top, we descended the 650 stairs back to the bottom. After only a brief wait, the bus back to Braga was short, then it was time for lunch. 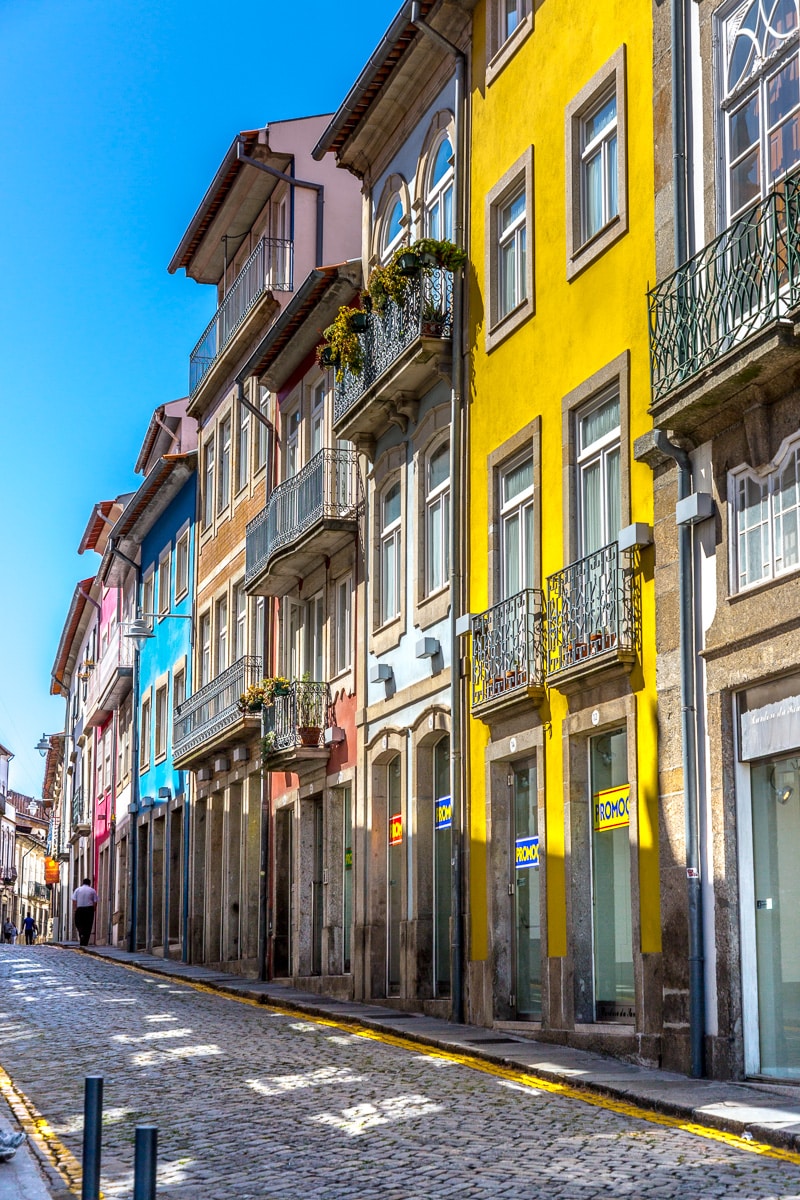 After a light meal we checked into our hotel, rested a while, and then went back out to admire the ancient narrow lanes, plazas and a wide variety of baroque churches, stopping in some museums including an ancient Roman fountain, and a former palace.

Not having reservations for dinner, we went early to a place that sounded good. But they were setting up for a fully booked evening. Not deterred, I asked for a recommendation for another restaurant. The woman did not speak much English but concentrating on what she was saying — remember, it begins with ‘Bem’, has some other syllables, and is near the arch, past the esplanade — somehow, we found the Restaurante Bem-me-quer. However, it was still early, and did not look open. Still, Chris opened the door and was greeted by a man whom we asked if we could have a reservation for 19h30, and he said yes. So we went out and wandered until it was time. 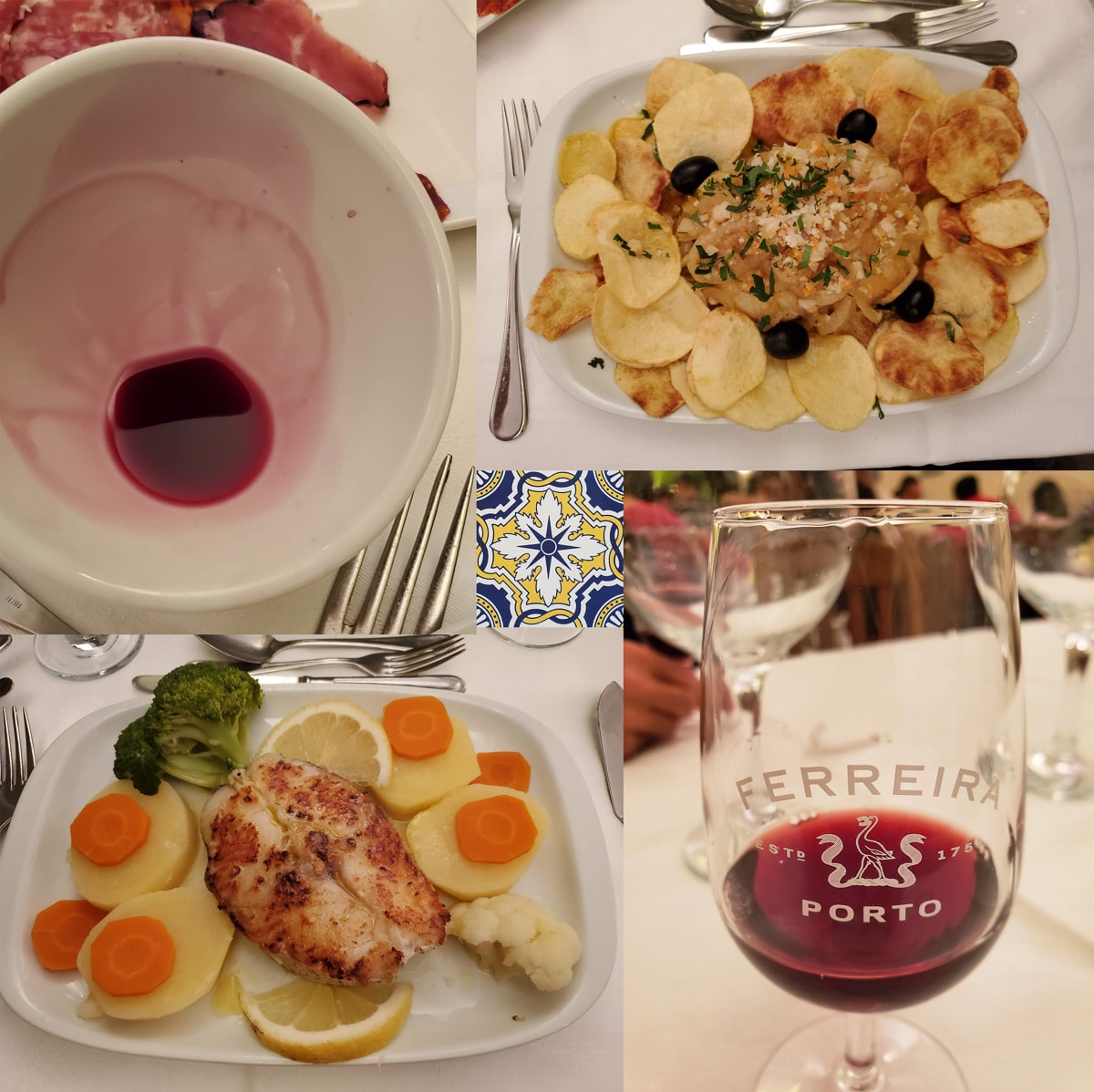 There were only two others in the restaurant when we were seated, and shortly, a young woman came to tell us about the menu and answer questions. Her English was very good, and as it turned out she was the daughter of the owners. Our table was set with bread, various sliced hams, several cheeses, butter and other spreads, but we only had some of the ham, knowing they are not complimentary and you pay for what you eat.

We each ordered hake — a deep-sea member of the cod family. Chris had his prepared their traditional way, covered with onions, served with thinly sliced, slightly crispy potatoes; while Jeannie had hers grilled, served with boiled potatoes, carrots, broccoli and cauliflower (yay vegetables!). Of course we ordered wine. Our server let us taste the local vinho verde tinto, in traditional drinking bowls. It is a very inky, dark-red/purple color, slightly bubbly like the white, but with a very distinct and acidic taste. Obviously, one must have an acquired taste, so a small sample was enough for us. Instead we opted for a bottle of the more traditional vinho verde. 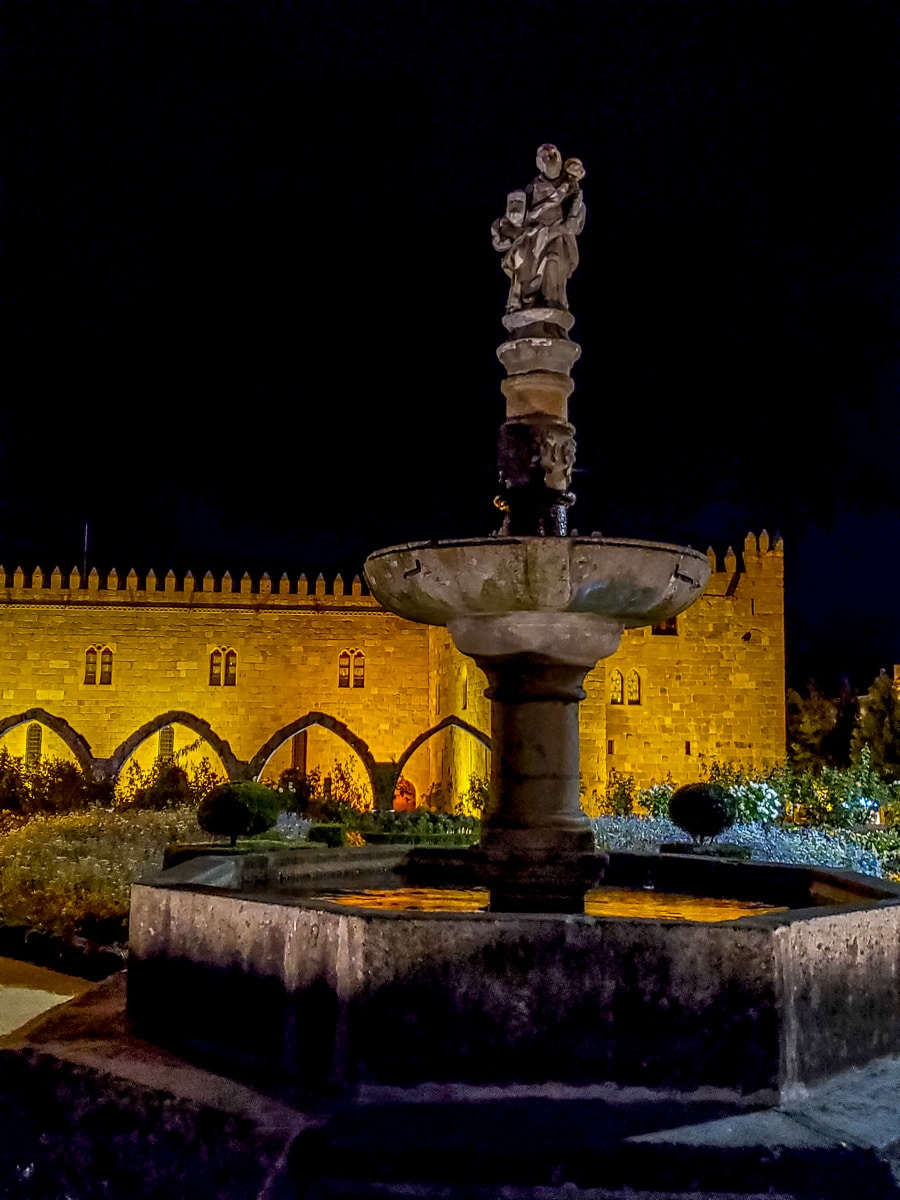 Vinho verde translates literally as “green wine,” originated in the historic Minho province in the far north of the country. Its name doesn’t refer to color, but rather to its being released 3-6 months after the grapes are harvested, i.e a very young wine. The wines may be red, white, or rosé, and are usually consumed soon after bottling. Vinho verde wines also often have a slight natural effervescence, though they do not quite qualify as semi-sparkling wines.

We had a wonderful 2+ hour dinner, and at the end of the meal, after dessert and coffee, our waitress brought us each a complimentary glass of port. How nice!

It was a beautiful night for the walk back to our hotel through the medieval streets of this charming city. And after such a meal, a bottle of wine, and more, we turned in to dream of stairs, medieval tales, and lots of wine. 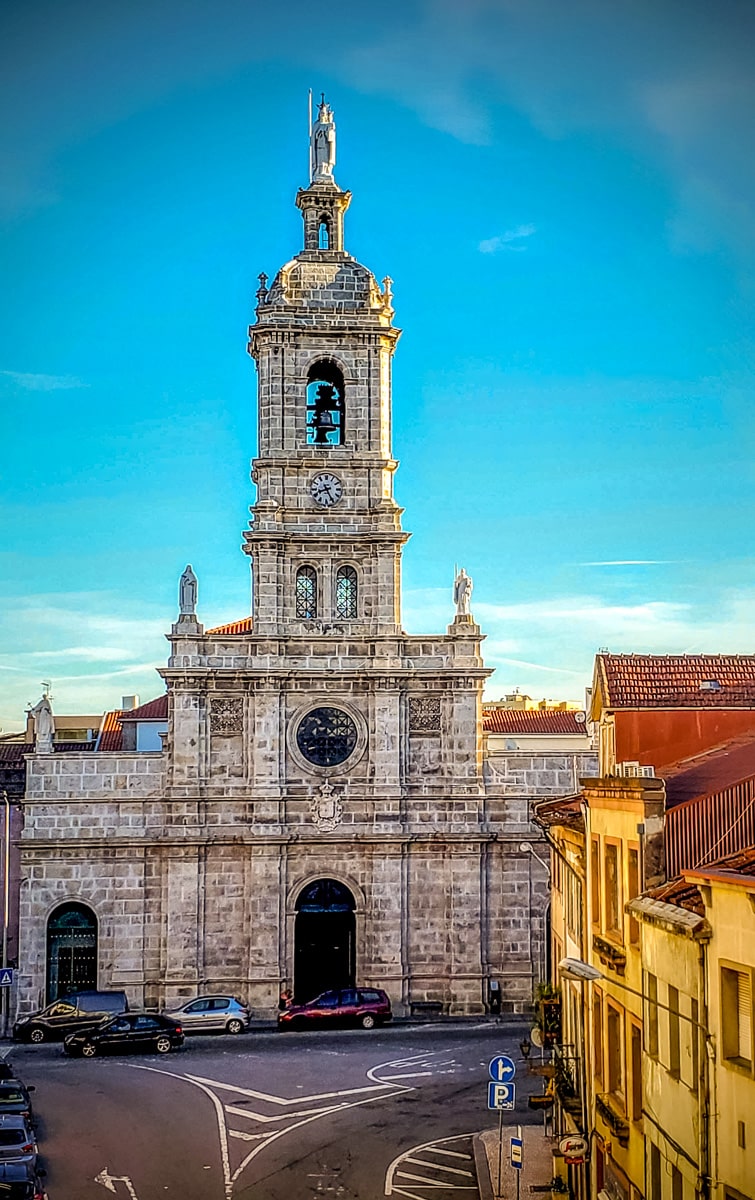 The next morning came early with the sound of bells from a nearby church, one of more than 30 churches, parishes and convents that are a reminder of Braga’s age-old spirituality.

We decided to grab breakfast at a small cafe down the street rather than at the hotel. Stepping outside, we were greeted by a cool morning with clear skies as the city started its day. A little after breakfast we were scheduled to take one of the free walking tours that are offered in many cities. But first we returned to the room and checked out, leaving our backpacks in the hotel’s baggage storage.

The walking tour was informative, even though we had already visited most of the places on the route; our guide was able to add new dimensions to this delightful city. 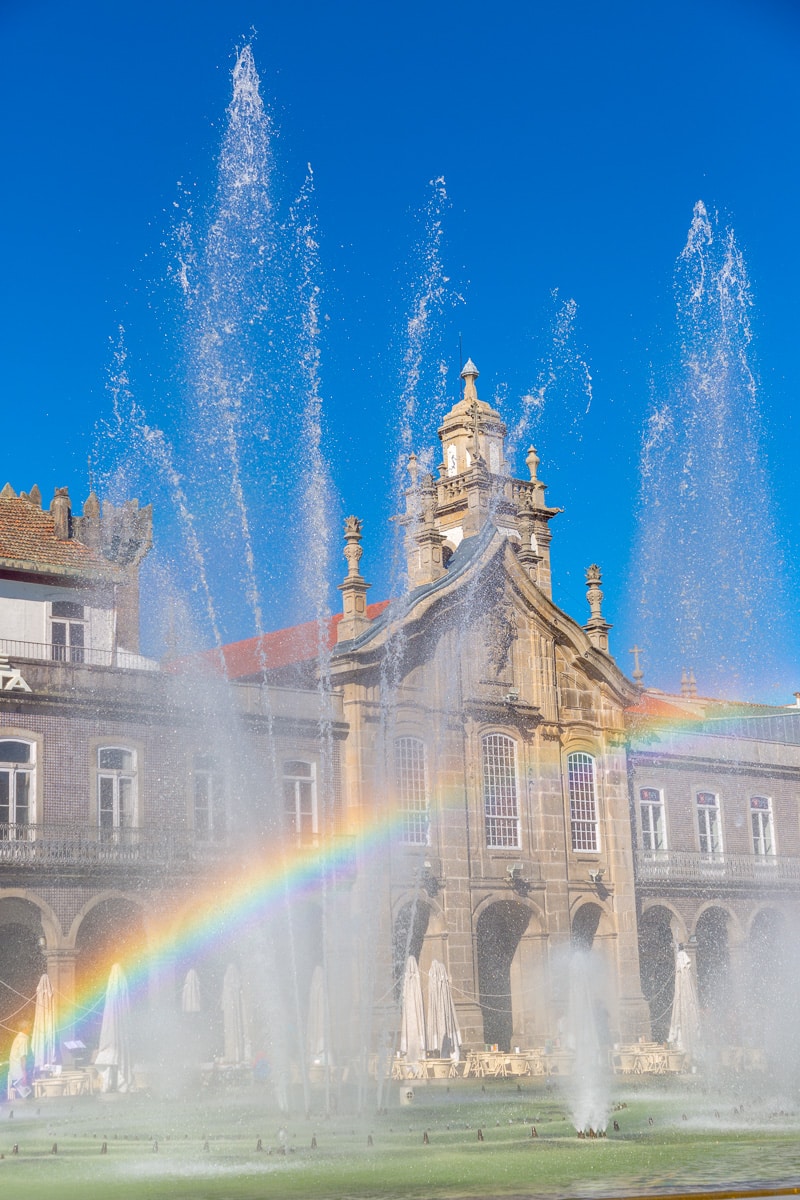 One of the places that our guide had pointed out was a restaurant, Frigideiras do Cantinho, built in 1796. Frigideiras are a typical dish of Braga, made with minced veal meat tucked into a puff pastry. This local delicacy is even mentioned by several famous Portuguese authors as far back as 1870.

But the other interesting thing about this particular restaurant is that in 1997 during one of the more recent of many renovations over the years, they discovered beneath the floors, the remains of an ancient, 1st and 2nd centuries, building dated to the Roman Empire. Today, a glass floor allows one to gaze down into the past as we did during our lunch there with an American couple we met on the walking tour. 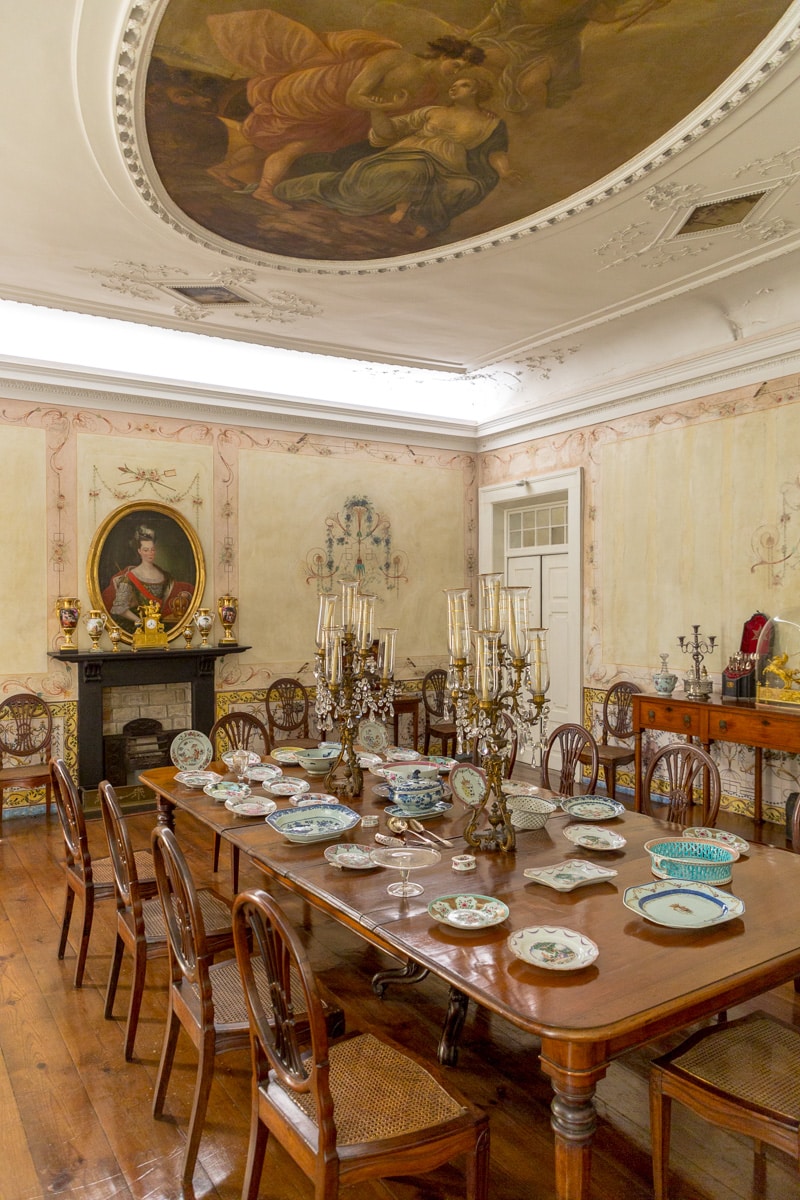 After lunch, we still wanted to visit the Museu dos Biscainhos, housed in a former palace built in 1699. Many of the rooms, especially the dining room, are furnished and decorated with pieces dating from the beginning of the 18th century giving a glimpse of the lifestyles of the time. It is a grand and detailed work of architecture that has obviously been cared for over the years.

Another gem attached to the palace is the 1 hectare (~2.5 acre) garden designed in the characteristic Baroque style, surrounded by walls, and divided into a beautiful Formal Garden, the Orchard and the Vegetable Garden. This garden also has a massive, 300 year old natural monument — the “Virginia Tulip Tree” (Liriodendron tulipifera).

Unfortunately, once we finished visiting Museu dos Biscainhos and its beautiful gardens it was time to return to the hotel for our backpacks and make our way to the train station for the 1-1.5 hour trip back to Porto. Braga deserved more than just a daytrip, but even an overnight wasn’t enough for this ancient and historic city. Still, what we saw, we saw well.