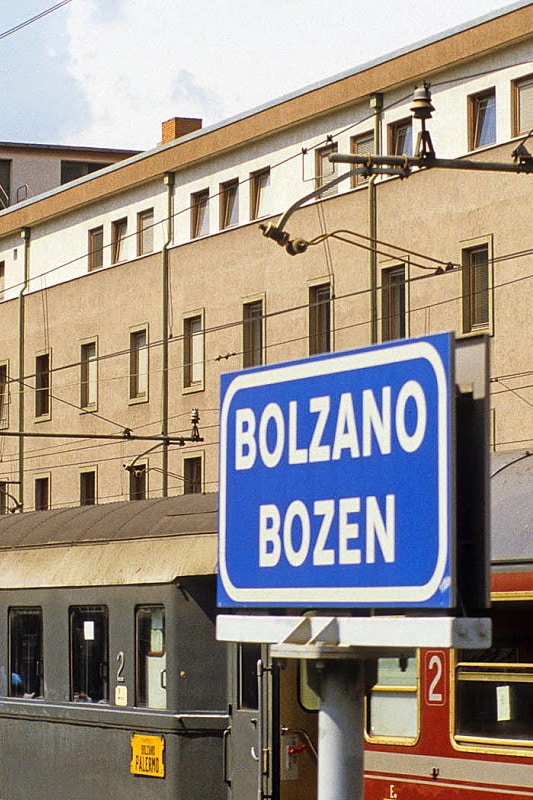 There was a different feel to this city in the once-Austrian, and now-Italian region of South Tirol. For one, at some point along our train ride there, we began seeing place names in both Italian and German. The announcements onboard the train, which had most often been Italian and English, were now Italian and German. We had learned of this beforehand in our research, but here it got real.

As we got off the train we heard far more German being spoken. When I tried speaking my rudimentary Italian, I had the feeling that someone in lederhosen might be scrutinizing me suspiciously. It was difficult to know whether to say “Buon giorno”, “Guden tag”, or just stick to “Hello”. Actually, just speaking English worked out best, though it was somewhat embarrassing that we barely speak one language, while everyone else could speak at least three.

Once merely a stop on the coach route between Italy and the Austro-Hungarian Empire, Bolzano / Bolzen is now the gateway to the Dolomites. As borders and politics shifted over the years mixing Italian and Germanic cultures, Bolzano / Bolzenwas the result. It is a wonderfully preserved town situated in a valley between the Italian Dolomites and the Austrian Tyrol. 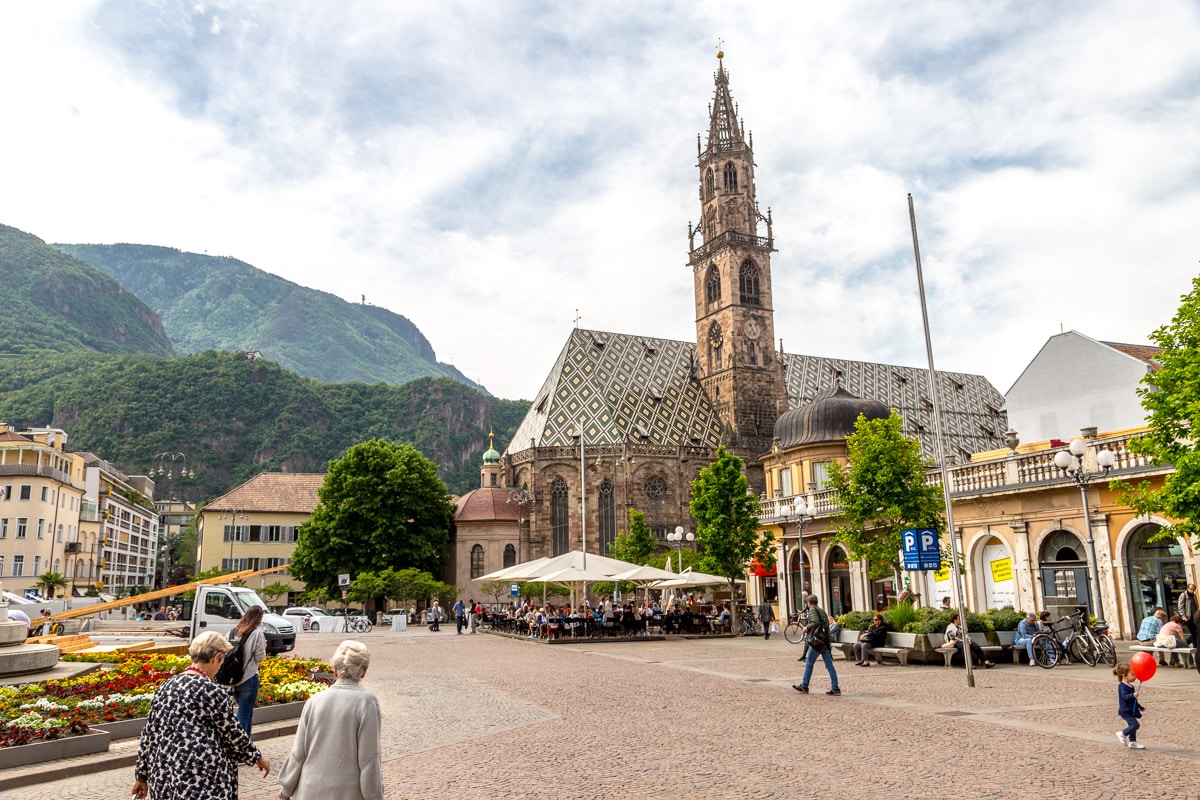 This tidy town is laid out around a large public square, the Piazza Walther / Waltherplatz, lined with cafes, shops, hotels and the impressive sandstone Assumption of Our Lady Cathedral topped by a multicolored tile roof.

At the center of the Piazza / platz is a statue of the place’s namesake, the 12th- to 13th-century wandering poet Walther von der Vogelweide, who stood up to the pope in favor of the (German) Holy Roman Emperor. 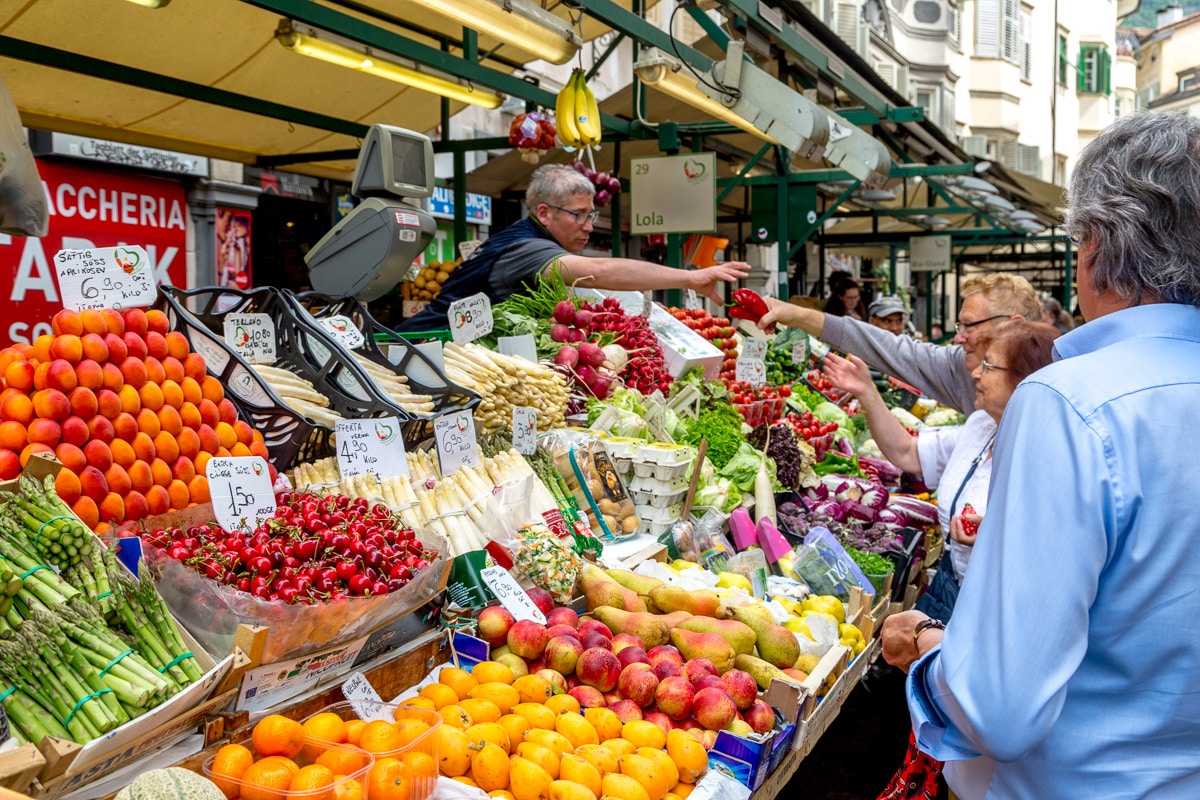 Nearby, in Piazza Erbe / Obstplatz) is an old and still-thriving outdoor produce market. It was a good place to get some cheese and salami, and then bread from the bread vendor – lots of wonderful choices for a picnic.

One of our goals in coming to Bolzano / Bolzen was to get closer to the Dolomites and to get out into nature. The tourist information office was very helpful in showing us some of the best paths out into the hills with some options to get still further out via cable car. 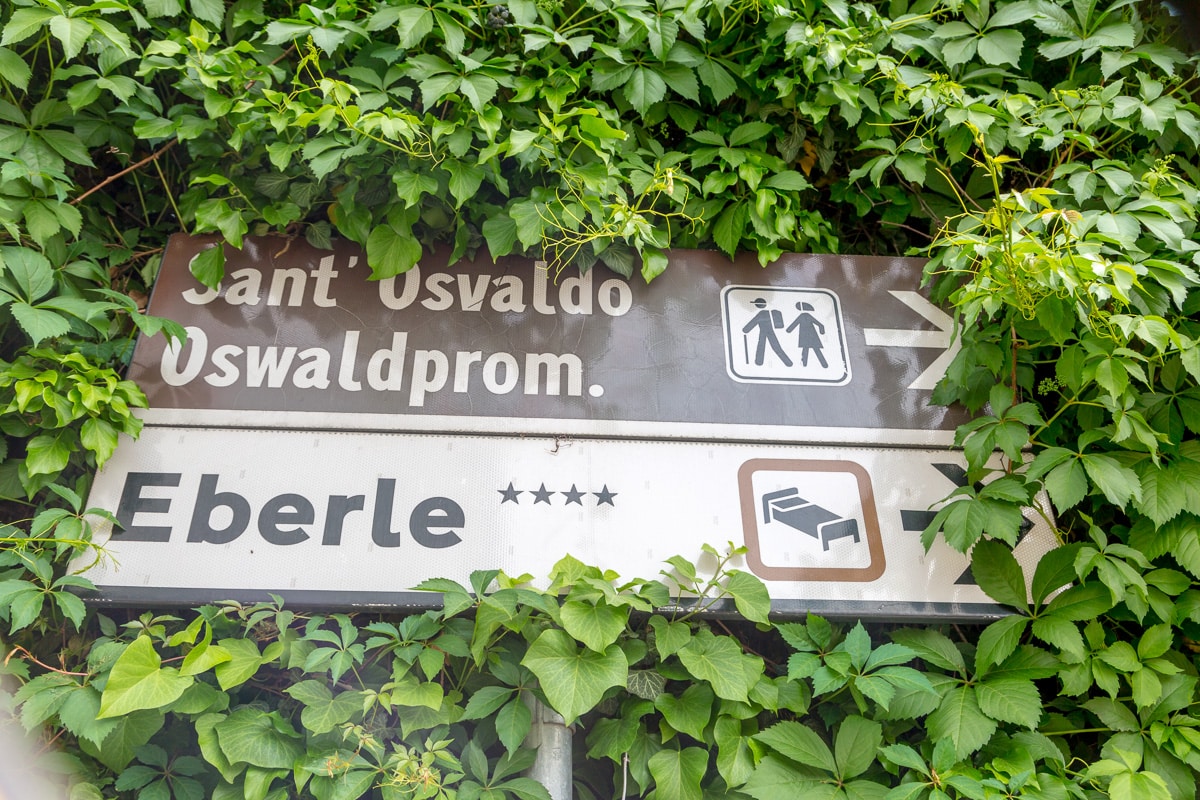 With our map in hand we took off away from the old town, through neighborhoods, and then onto the footpath called the Sant’Osvaldo Promenade / Oswald­promenade. The gravel path climbed upward and upward along a big hill, through vineyards, with fine views across the valley and Bolzano / Bolzen. There were small mountains nearby with big snow-capped mountains in the distance. 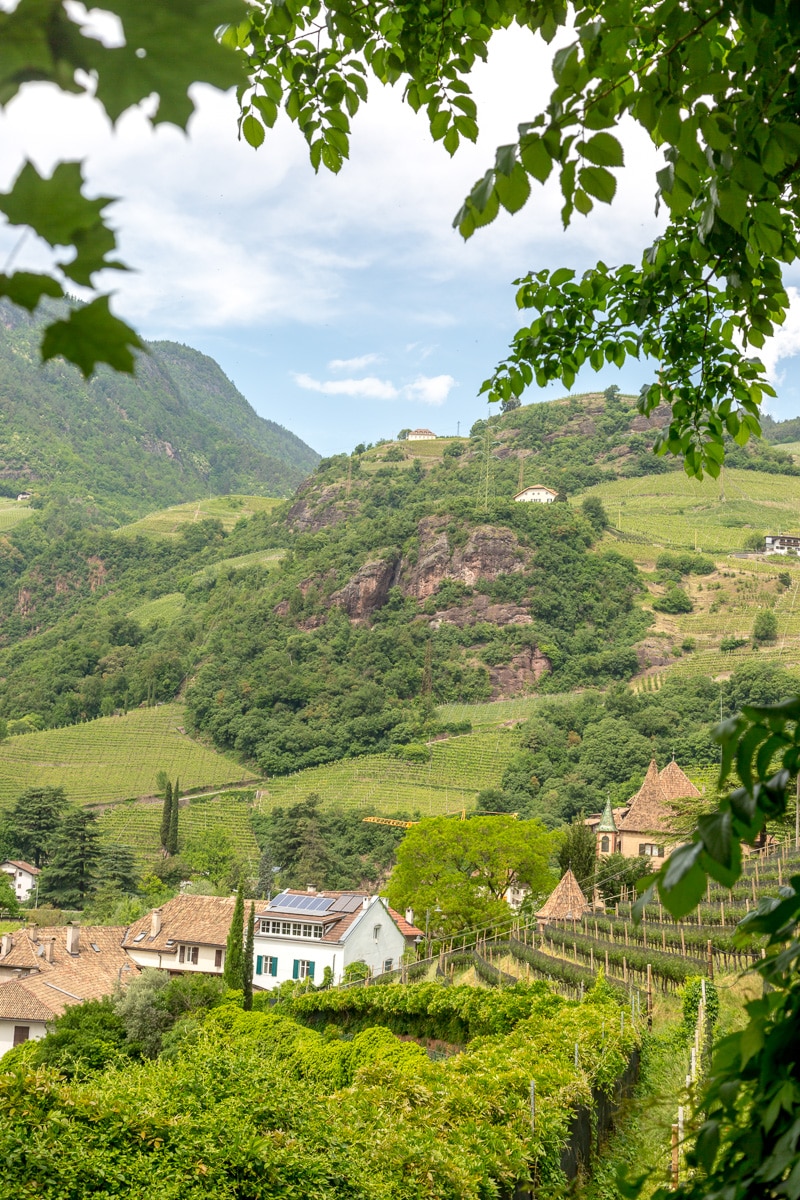 It was good to be back into the green woods, with colorful wildflowers lining our way. Up and up we went with at least 20 switchbacks. Along the way were benches where we stopped for a bit of sausage, cheese, bread, and to enjoy the view, and then begin the descent down.

The Promenade ended around the other side of town, and then we went on very small roads past a picturesque little church located amid the vineyards. The 13th century St. Mary Magdalene Church is said to have some remarkable frescoes. However, signs in German and Italian indicated that its hours were 16-18h and it was currently only about noon. Oh well.

From there we took a very steep single lane road back down to the city streets and located the cable car terminal just a short distance from the train station. It’s the longest cable-car journey in Europe (4.5 km / 2.8 mi), with the largest change in height (935 m/ 3068 ft) connecting Bolzano / Bolzento the small village of Soprabolzano / Oberbozen at the top of Ritten / Renon mountain. 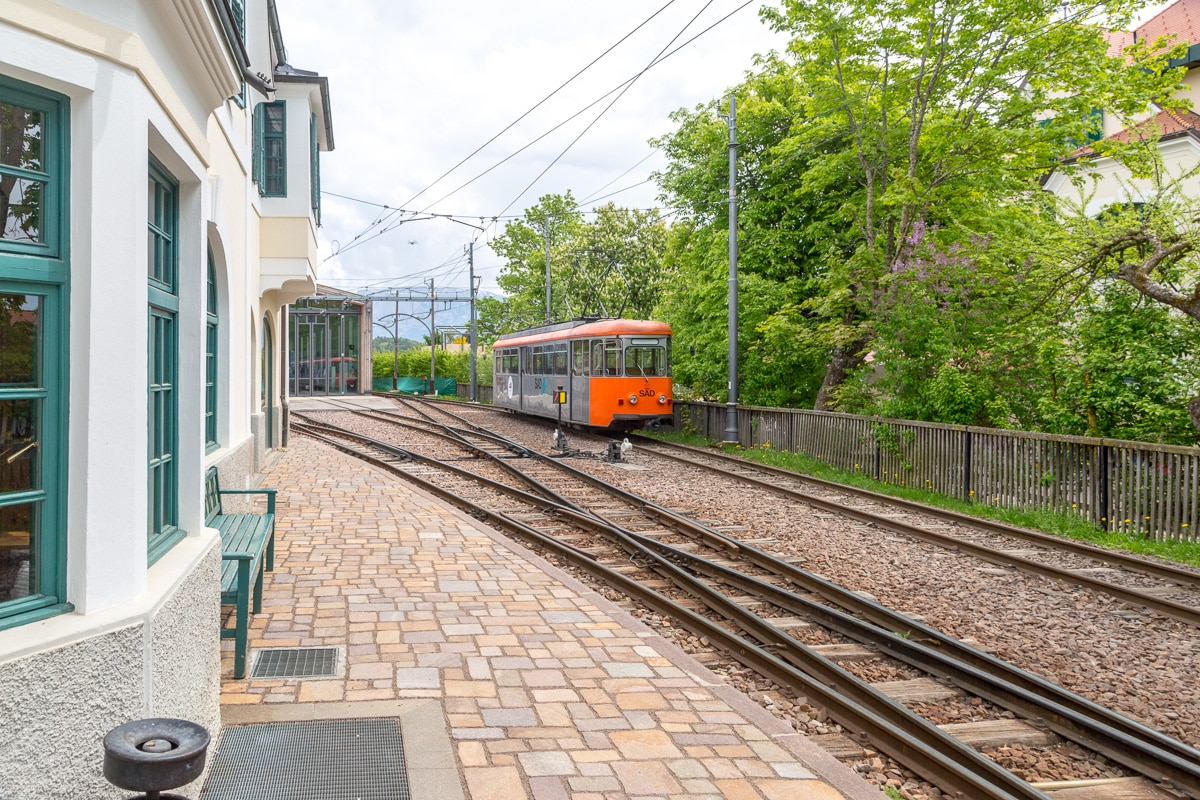 The views were spectacular along the 12 minute journey flying above forests, meadows, and stone.

Once we arrived in Soprabolzano / Oberbozen, we located the TI to find out where to hike. We were informed that the best walking was in the village of Collalbo / Klobenstein.. So we bought tickets for the old narrow-gauge local railway (since 1907). There were spectacular views of the Dolomites along the way, and lots of little stops, and shortly we finally arrived at Collalbo / Klobenstein. 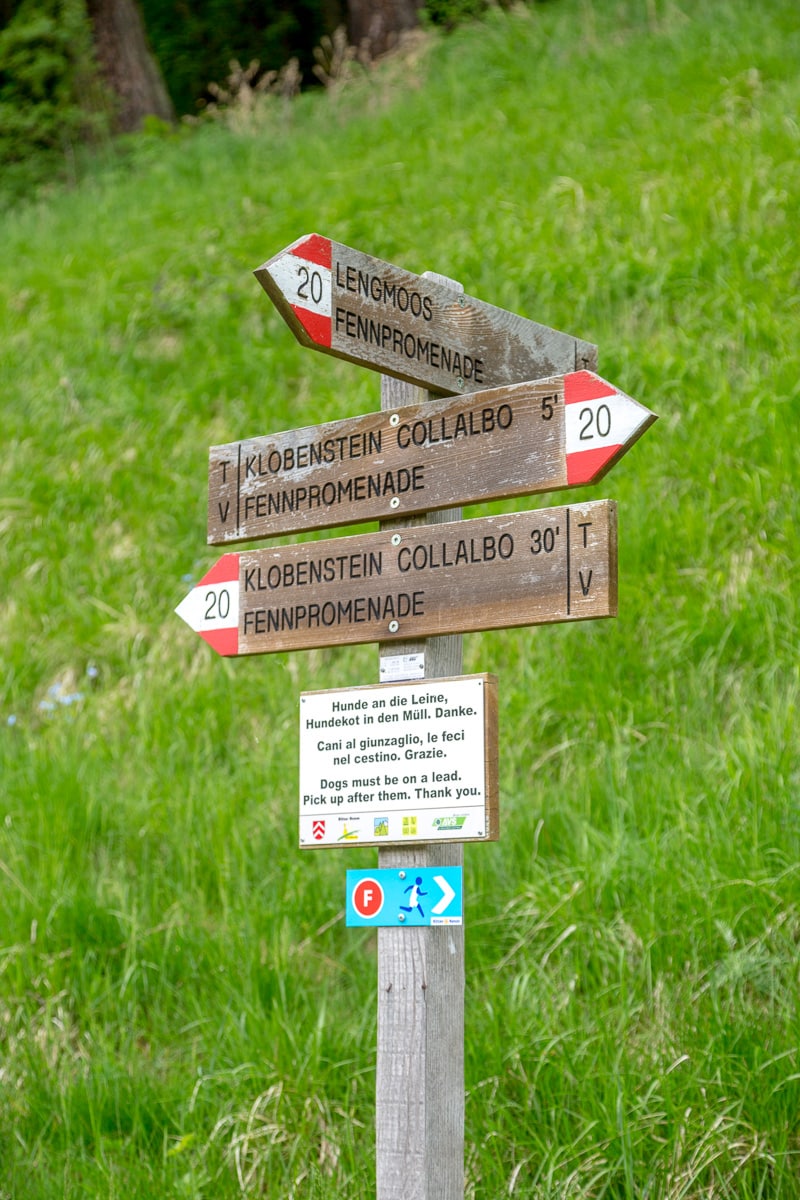 Following the main path, there were several signs pointing to many different walks. Choosing the Fern Promenade, we found ourselves, again, deep in the forest. At one point we decided not to go further, due to the time, but then spotted a sign to view earth pyramids – interesting geological formations of glacial origin.

There were also good views of the Dolomites, though the clouds were building, and the little drizzle of rain was beginning to be threatening. During a lull in the rain we stopped for another bite of salami, cheese, and bread, and took some time to appreciate the place for a few minutes.

Walking back out of the woods and into Collalbo / Klobenstein, we stopped at café. I got a Cafe Americano while Jeannie ordered a cup of tea, but got a cappuccino. Trying to heal her disappointment, she decided to get something sweet, 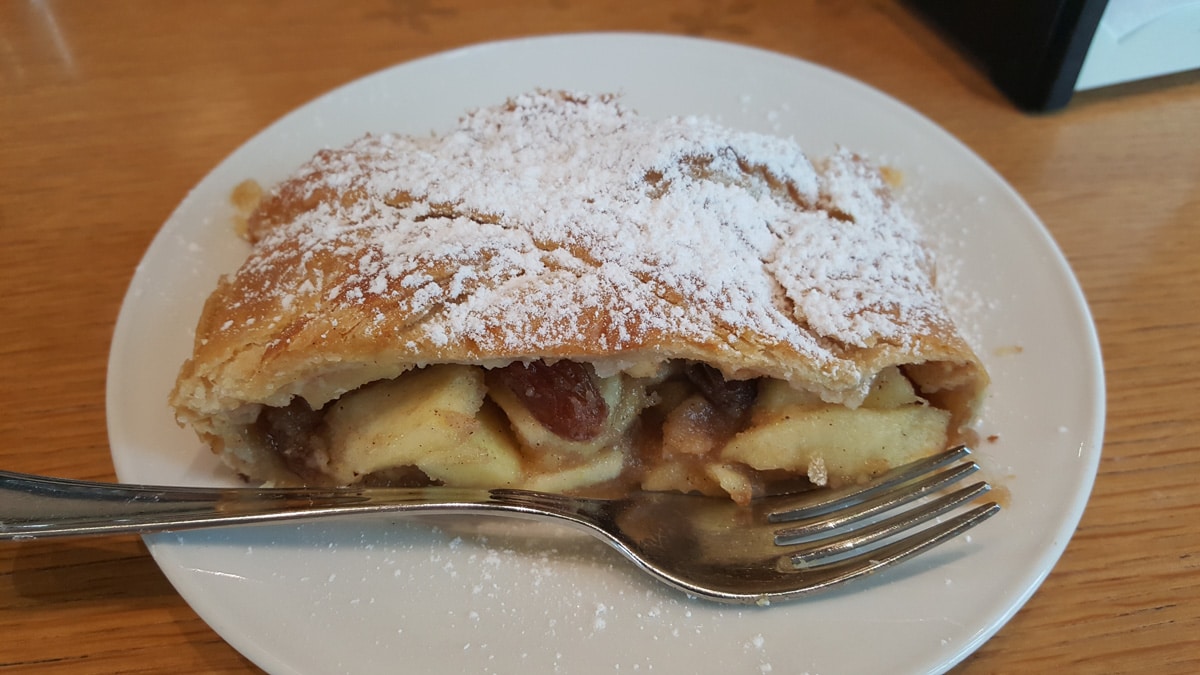 “Oh they have apple strudel!!” she exclaimed and ordered a large slice, dusted with powdered sugar. There was plenty to share with me, and it was pretty darned good! 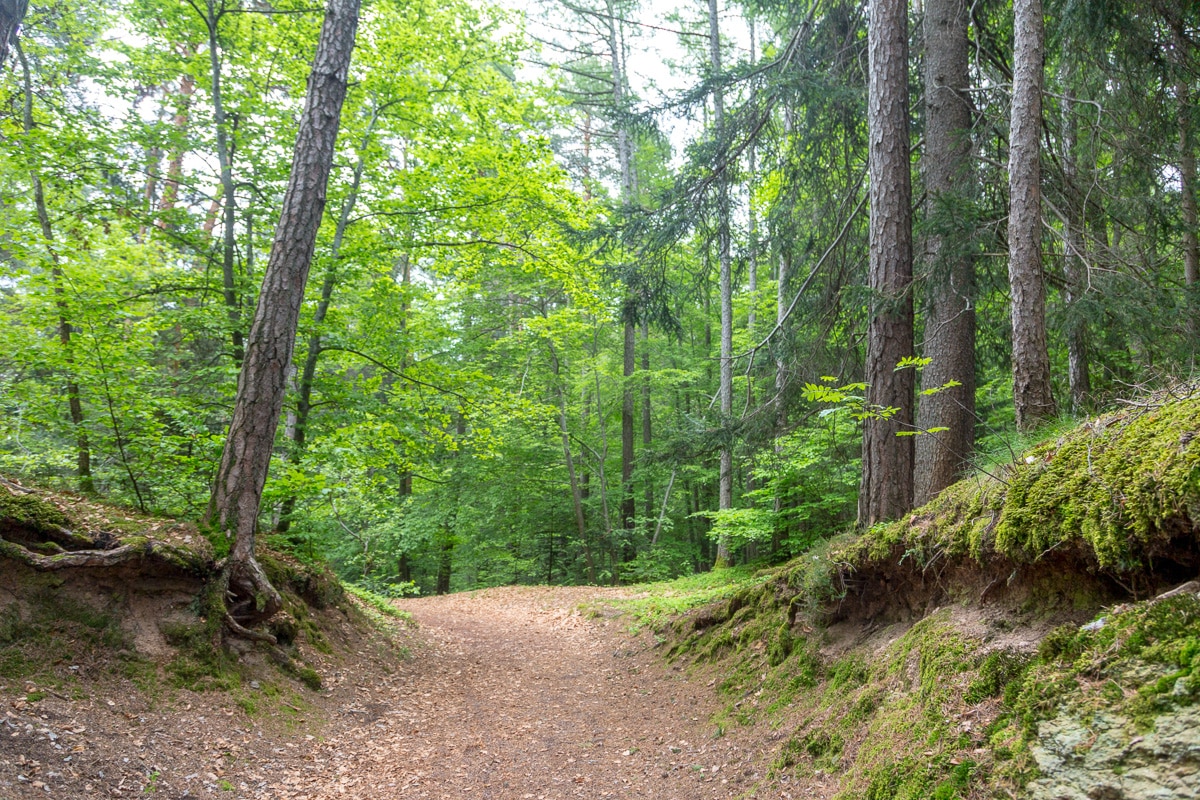 We had had a long day of hiking both in town and on trails, and we were feeling it. The legs were complaining and it was raining pretty solid. The local train was waiting at the station and we got on for the return back to the cable car.

On the first Monday of each month, maintenance is done on the cable car system, so our return was by bus giving us a different view. All of the switchbacks on the road provided a new wow factor! It would have been a driving challenge in a small car, but our bus driver was good. 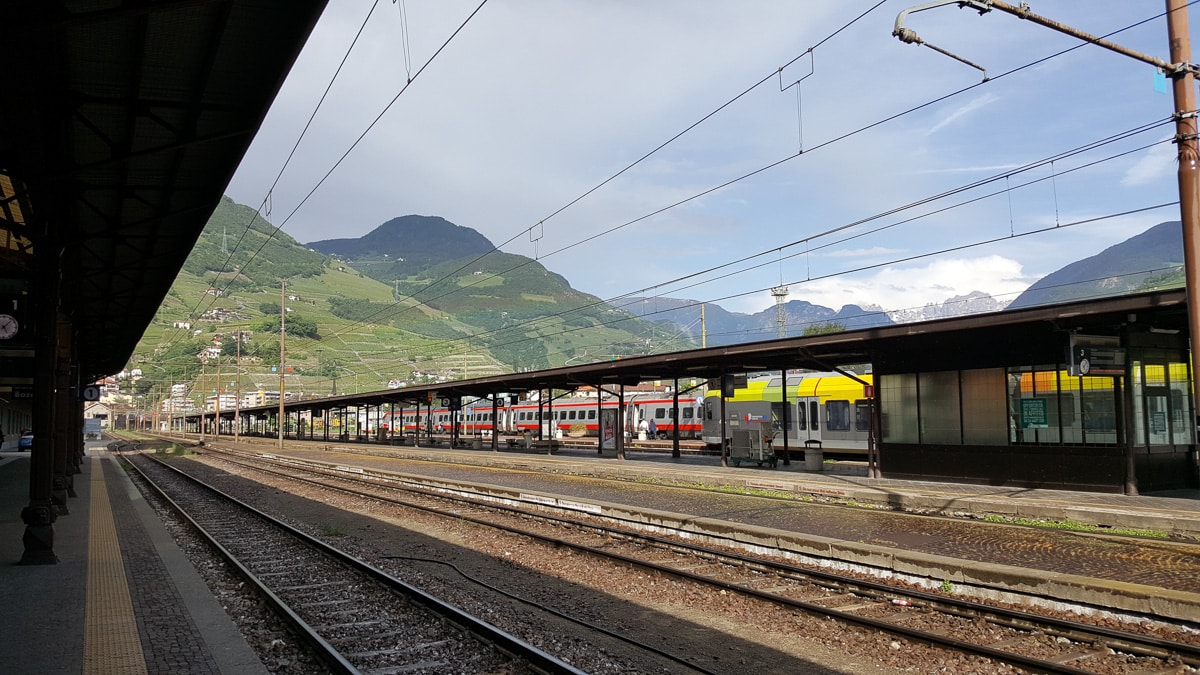 The rain was continuing and it was 1700h (5:00pm) so we decided to head on home. We hopped off the bus at the train station only to learn that the return train was a local train and would take over two hours, making many stops along the way. So we bought a large bottle of water and two sandwiches and waited. We managed to find decent seats, though facing backward. Still, the train became less crowded at each stop and soon we had the choice of better seats and we enjoyed the scenery passing by.

Arriving back at Verona’s Stazione Porta Nuevo, we walked the short distance home, ate our sandwiches, showered, and turned in for a good night’s sleep.