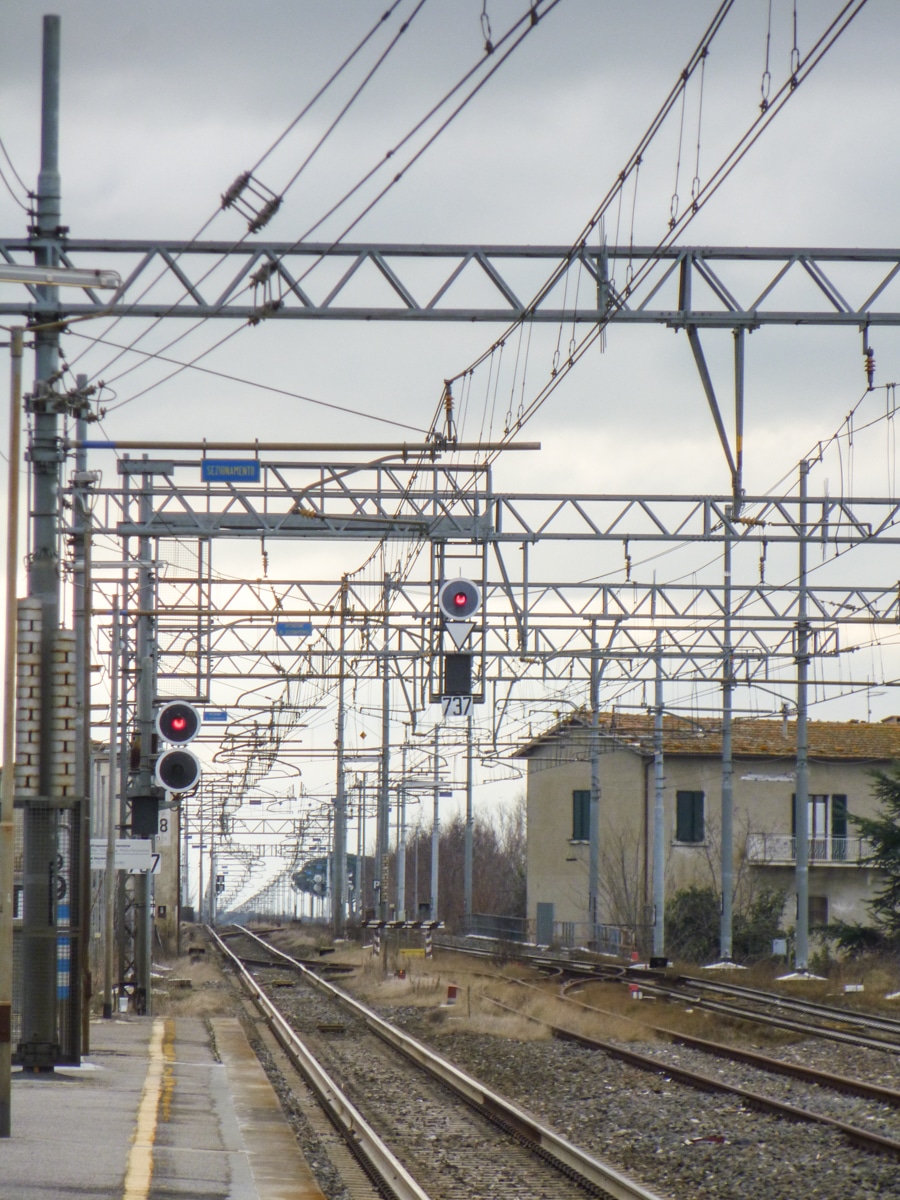 Florence, the birthplace of the Renaissance, was founded as a Roman military colony about the 1st century BC. During the 14th, 15th, and 16th centuries Florence achieved preeminence in commerce and finance, power, learning, and especially art. Among the most famous of the city’s cultural giants are Leonardo da Vinci, Michelangelo, Dante, Machiavelli, Galileo, and its most-renowned rulers, generations of the Medici family. Its buildings are art in and of themselves, and they are filled with some of the more important pieces of art in the world.

We arrived by train from Camucia/Cortona. The four of us, Jeannie and I, and Mike and Kathy were excited about spending the next three days in Florence. The hotel was only about a ten minute walk from the train station, so as we pulled our luggage along the sidewalks as the hustle and bustle of the city engulfed us. We had, before now, been in small towns and villages, so this was a pretty big city by comparison. 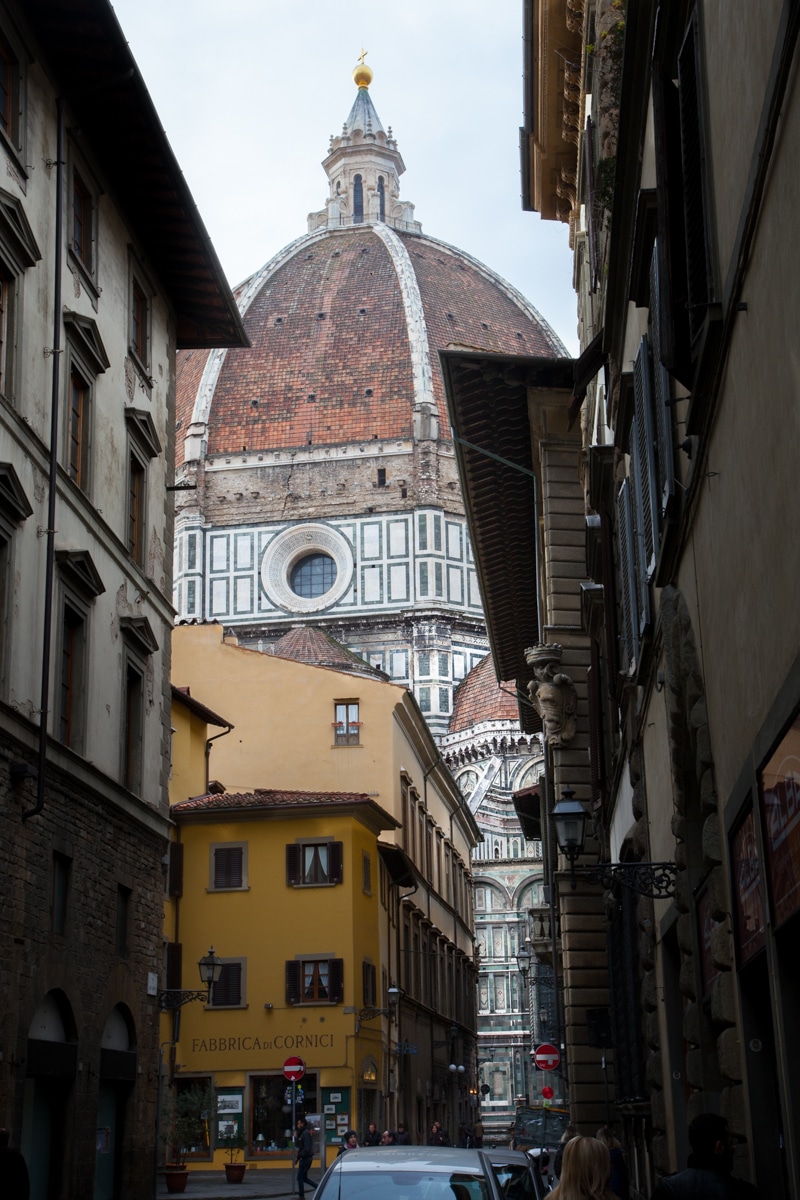 About half-way to the hotel we rounded a corner, and just ahead appeared the Cattedrale di Santa Maria del Fiore or Il Duomo di Firenze, as it is ordinarily called. Jeannie and I having visited Florence many years before knew what to expect. But to Mike and Kathy it was an amazing sight, and I have to admit that both Jeannie and I also had to stop to take in such a magnificent view.

Though we were to be in Florence for three nights, it was actually going to be only two full days, as the arrival day is half travel and the final day is departure travel. But once settled into the Hotel dei Macchiaioli, we quickly regrouped to grab some lunch and explore the city.

The remainder of the day was spent wandering the main public areas. The entire historic center of Florence is a World Heritage Site, so there were amazing sights everywhere we looked. We returned to the Duomo and walked around the magnificent cathedral, campanile and baptistery, then through the Piazza della Signoria and its open-air sculpture gallery, the Palazzo Vecchio.  A copy of Michangelo’s famous “David” is there, the original having been moved from the piazza in 1873 to protect it from damage is now displayed in the Accademia Gallery. 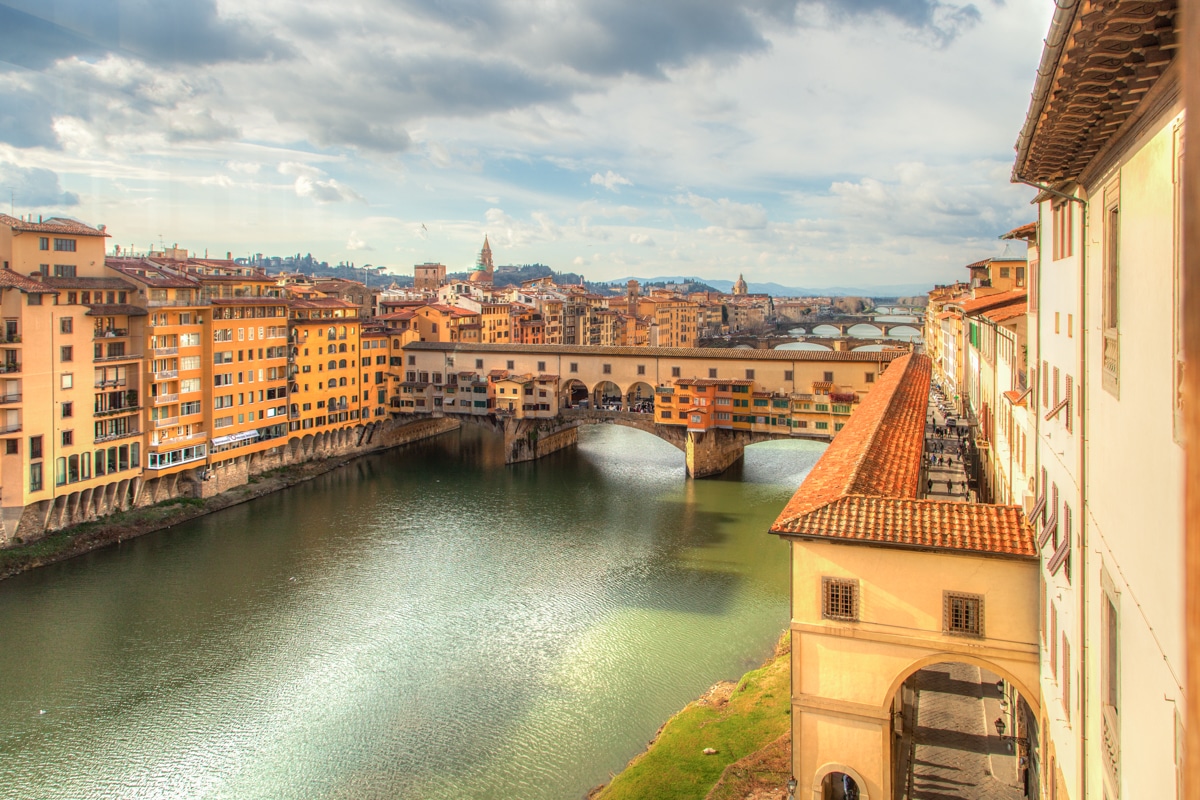 We passed the Uffizi galleries and walked along the Arno River. The Ponte Vecchio, at the narrowest point of the Arno, is where bridges have stood since Roman times, but most have been swept away by floods. This iteration was built in 1345, and was the only bridge in Florence to escape destruction by retreating German forces in 1944, supposedly on the direct orders of Hitler.

Since we arrived on Saturday, we had to make some plans for the next two days. Because all of the museums in Italy are closed on Mondays, we only had one day to spend inside. Then we assumed that we could visit the Boboli Gardens on Monday.

So we looked online to try and get tickets to visit the Uffizi Galleries for the next day, Sunday. The first 10 or so sites indicated that there were no tickets available until the following Thursday. Further research indicated that each of these sites were resellers and probably could only sell tickets x-days in advance. Once I found the official Uffizi Galleries website, there were indeed tickets available, but the time slots choices were few. When I found four tickets available at 1:00 pm for Sunday, I reserved them as soon as possible.

We met Mike and Kathy outside the Uffizi at the appointed hour and entered with no line and no problem. Though the museum was busy it wasn’t too crowded and we were able to move rather freely. 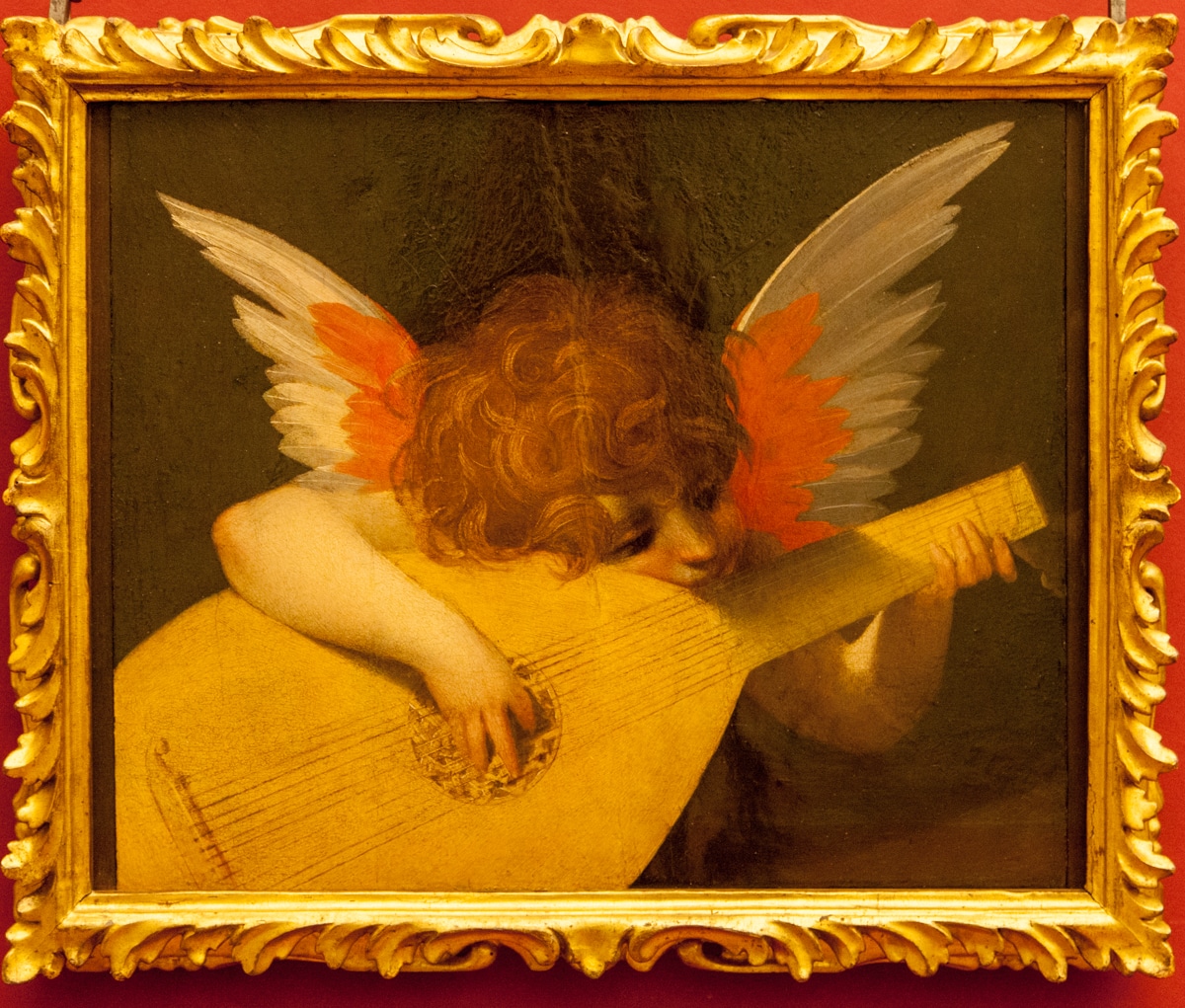 As one of the most famous museums of paintings and sculpture in the world, the Uffizi contains some of the most significant masterpieces of all time. There are works by Fra Angelico, Filippo Lippi, Botticelli, Mantegna, Correggio, Leonardo da Vinci, Raphael, Michelangelo and Caravaggio. German, Dutch and Flemish masters are also well represented with important works by Dürer, Rembrandt, Rubens, and so much more.

To thoroughly see all of the art in the Uffizi alone could take days, months, or a life time. But as it was with so great museums we have visited, one can become saturated after 2-3 hours of even the most spectacular art. True, I have my favorites that I could study for a very long time, such as Caravaggio, Botticelli, and Rembrandt.

Also, there is the temporal aspect of visiting great collections of art. Watching the progression of styles over the centuries; from the Ancient, to the Middle Ages, through the Renaissance, and the Modern, one can see and feel the changes in, not only art, but science, mathematics, politics, and of course life itself.

As a photographer, I marvel at the lighting in the paintings by the Masters. Most great paintings teach lessons on color, contrast, composition, lighting and subject that can all relate to photography. I always come away from viewing great art with a desire to make better photographs.

Later, after having finished with our tour of the Uffizi, we returned to the hotel, cleaned up and then had an early evening stroll before dinner. We walked back streets and alleys, occasionally arriving at a location that was familiar.

Dinner tonight was at Mangiafuoco Bracerie, recommended by Paolo, the helpful and friendly concierge at the hotel. We had a delicious meal, and after a brisk walk back to the hotel we turned in, full, tired, and satisfyingly warm. 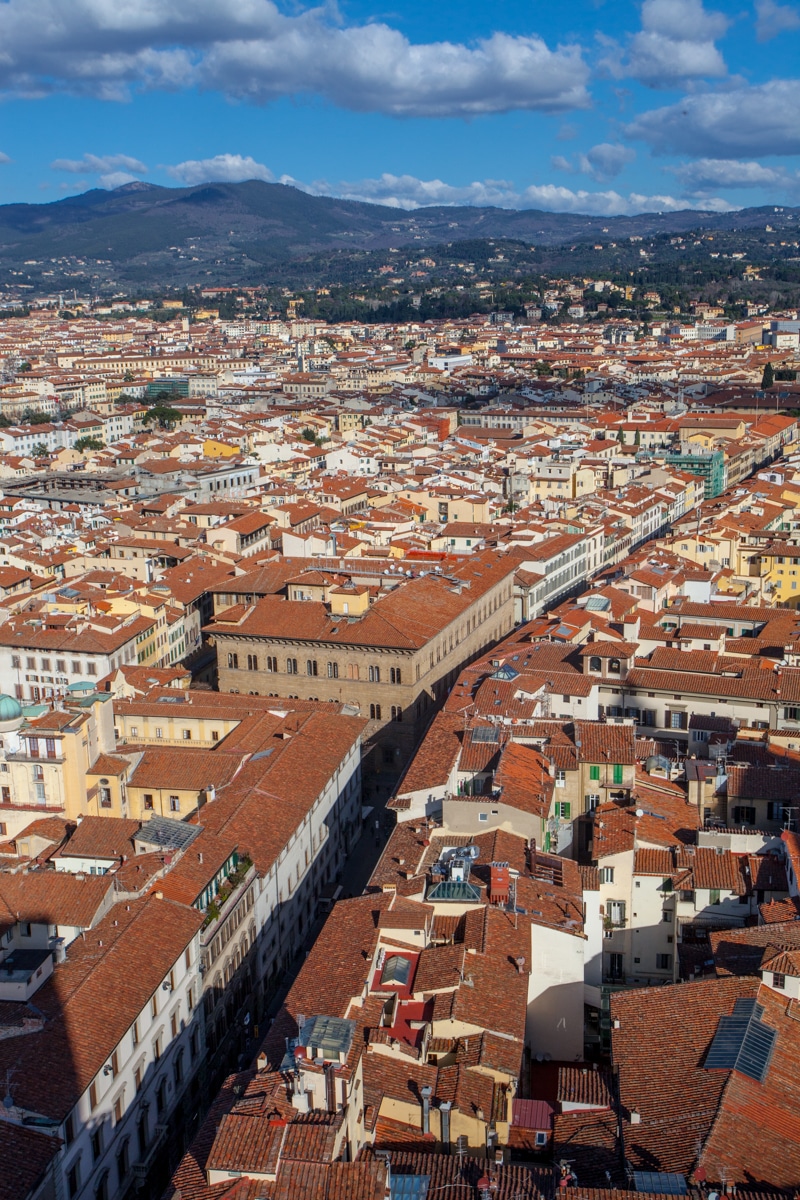 The next day, Monday, we were up and out somewhat early, and we retraced our steps towards the Boboli Gardens. On the way, Mike and I decided to climb to the top of Giotto’s Campanile, next to the Duomo. At 84.7 meters (277.9 ft) tall, we climbed the 414 steps where we were treated to a breathtaking panorama of Florence and the surrounding hills. Jeannie and Kathy, on the other hand opted to shop.

The Boboli Gardens are situated behind the Pitti Palace, the main seat of the Medici grand dukes of Tuscany. Developed in the mid-16th-century, the gardens cover 45,000 meters² (111 acres), and are one of the largest and most elegant Italian style gardens in the world. And they are open on Mondays when all other museums are closed! EXCEPT when they are “Closed on the 1st and the last Monday of each month“, and today was the first Monday of February.

So what do seasoned travelers do when shut out of desired destinations in Italy? Well, eat,   drink wine, and go to plan B! 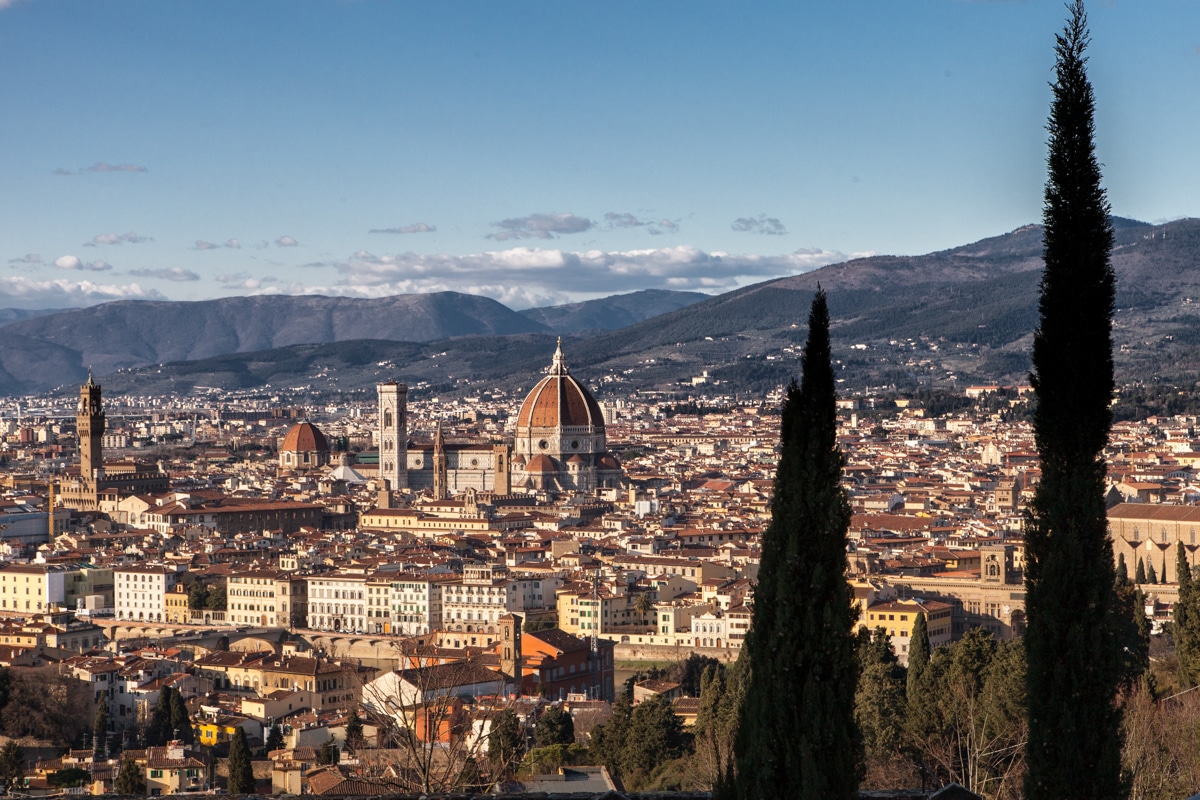 After lunch (at Ristorante Ricchi) we headed up towards Piazzale Michelangelo, with its great view over the city. And then still further up to the Abbazia di San Miniato al Monte which is described as one of the finest Romanesque structures in Tuscany and one of the most beautiful churches in Italy.

Keep in mind that this was all on foot and we had been averaging at least 12.9k (8 miles) per day (Jeannie keeps a pedometer in her purse).

Once again we later had a wonderful meal at the Ristorante Accademia, where we ate well, drank copious amounts of delicious wine and were entertained by our friendly waiter Kush. It had been a great time out in the Florentine evening; yet, tomorrow we would have to leave. There was so much that we hadn’t seen, but that is always the case. Besides, tomorrow we go to Venice.