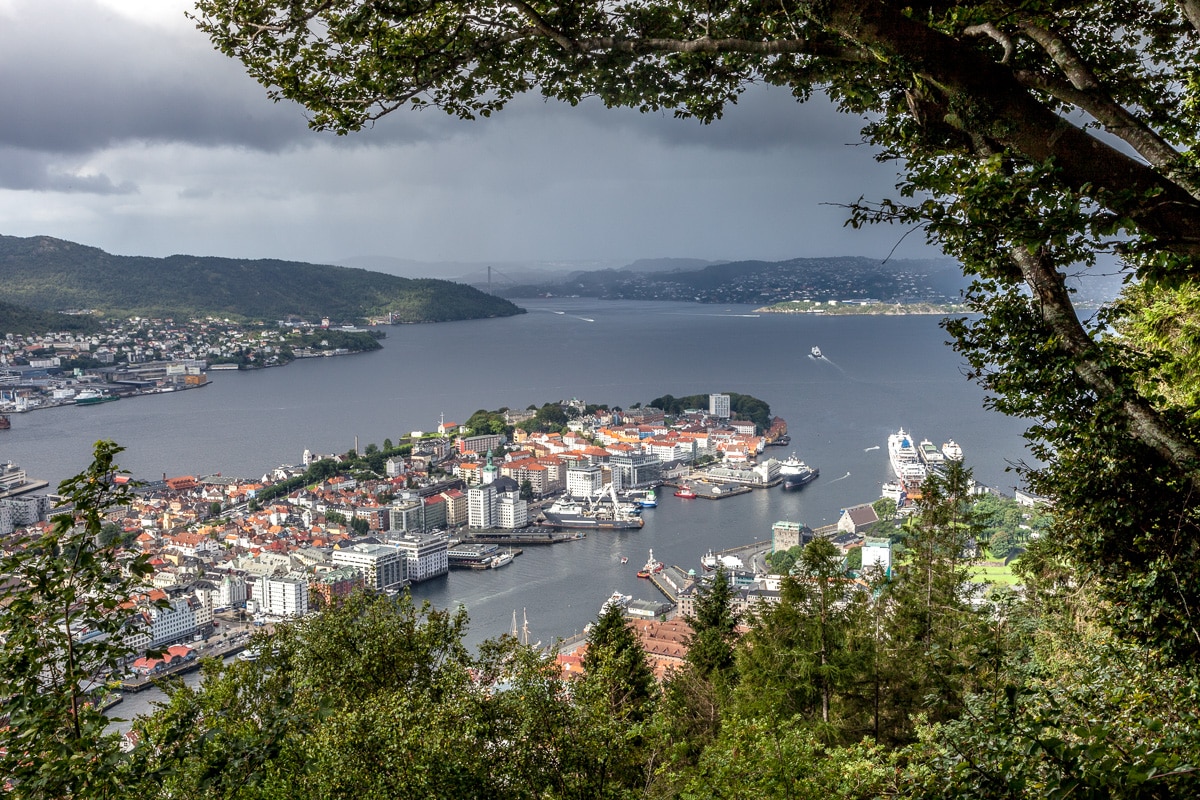 When we landed in Bergen, Norway, I think we were a bit more unprepared than we had been upon any previous arrival.  I mean, we had done our homework, but unlike many places, there were fewer preconceptions about what we would find.

Our taxi made the 18k (11mi) drive from the airport, through Bergen and to our apartment without a problem. The driver was friendly, and after we commented on how beautiful the weather was, he informed us that it had been pretty wet and cold for several days prior to our arrival. 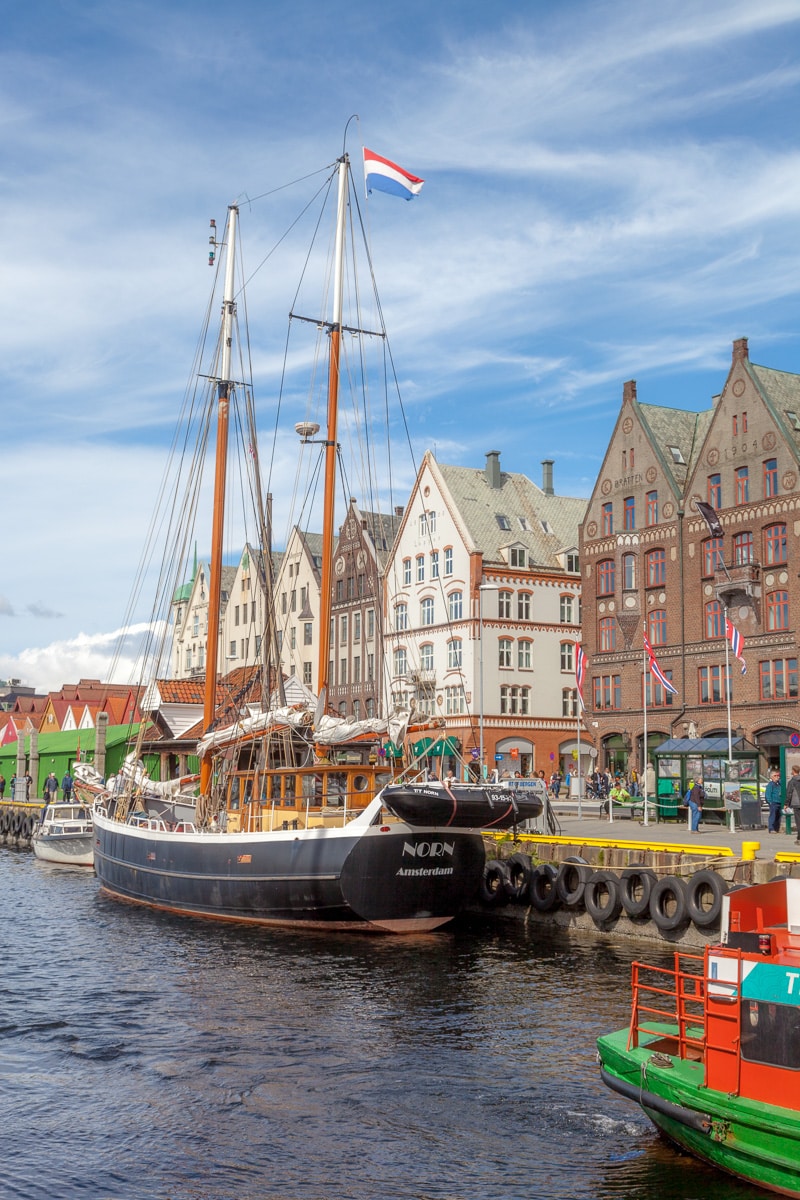 But today the weather was beautiful. It was glorious, warm(ish) and sunny. So after unpacking our luggage and taking inventory of the kitchen, we set out to locate the Tourist Information office, explore our neighborhood, and find a grocery store.

The town center was only a 15-20 minute walk from our apartment. Charming houses lined the steep cobblestone streets on the side of mount Floyen, one of the seven mountains that surround this city.

Bergen was established around the 1020s or 1030s as a trading settlement. Its principal export was dried cod from the northern Norwegian coast. Given exclusive trading rights by king Håkon Håkonsson, Bergen was all but guaranteed success. Indeed, by the late 14th century, the city was securely established as the center of trade in Norway. Indeed, Bergen’s role as a trading center has brought it prosperity for most of its 900-year history. 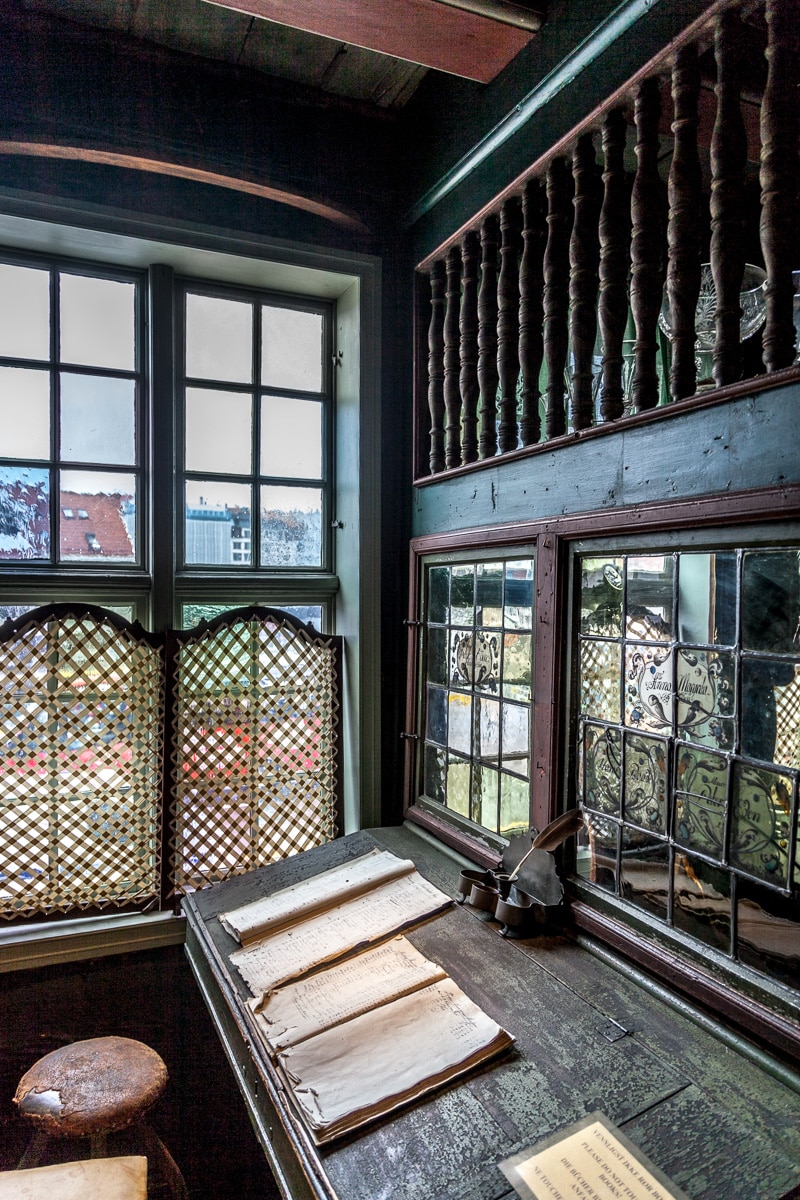 Most important in the development and growth of Bergen was the commercial expansion of the Hanseatic League, a powerful economic and defensive alliance loosely based in the German cities of Lübeck and Hamburg. The Hansa, as it was known, is considered the first common market. It had no interests but commerce.

In 1368 the Hansa established a Koutor, a ‘counter’ or trading post in Bergen to take advantage of the need for Norway to import grain to feed its population. The league dominated the grain trade and in exchange, exported Norwegian cod. When the Norwegians contested the Hansa for trading privileges which excluded English and Dutch merchants, the Hansa fleet simply blockaded the ports. 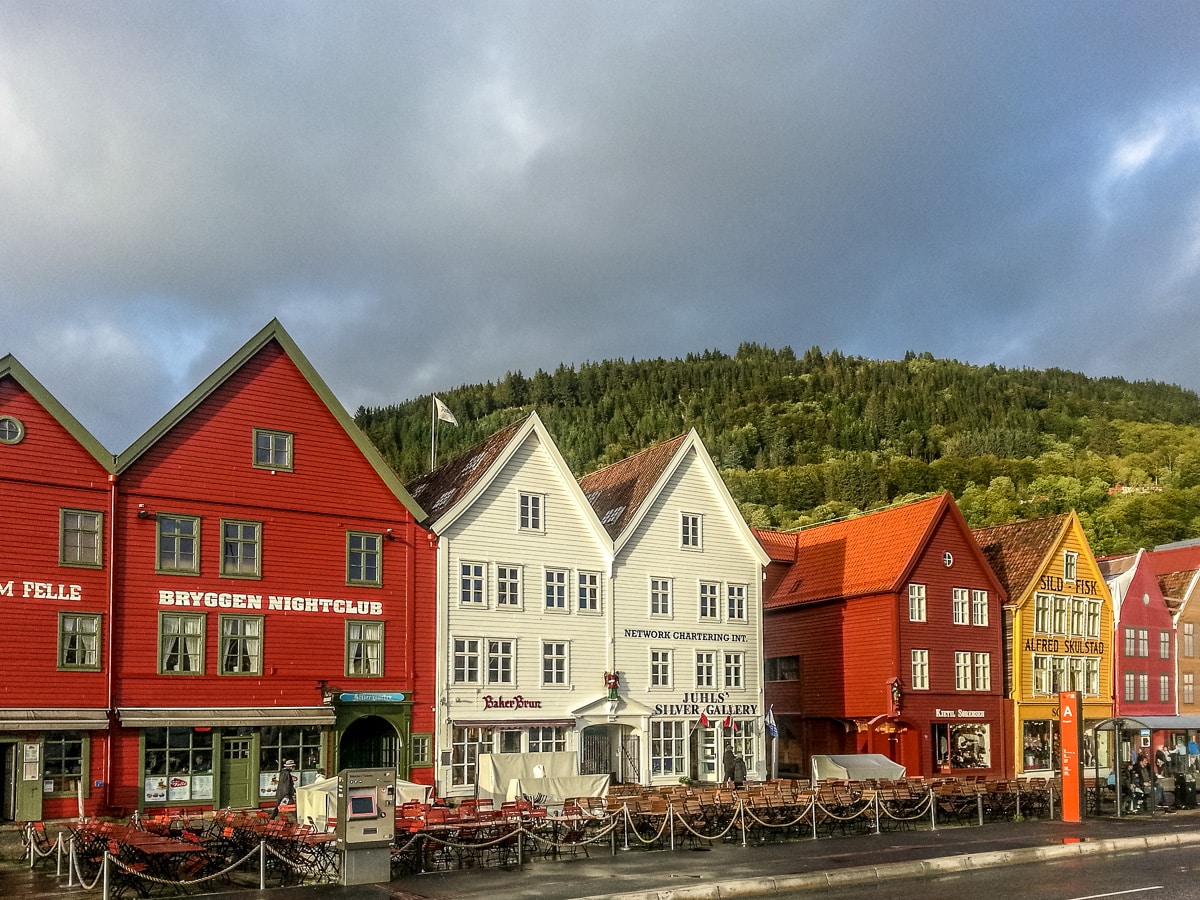 A major historic feature of the city is the Bryggen, the small wooden buildings of the old Hanseatic merchants’ quarter and the wharf created during Bergen’s period as a member of the League during the Middle Ages.

On the way to the TI office, we stopped into the first grocery store we came across just to look around. Compared to the large US supermarkets it was rather small and had a limited selection. As we wandered the aisles using our mobile phones to calculate the exchange rate, it also seemed to be rather expensive. 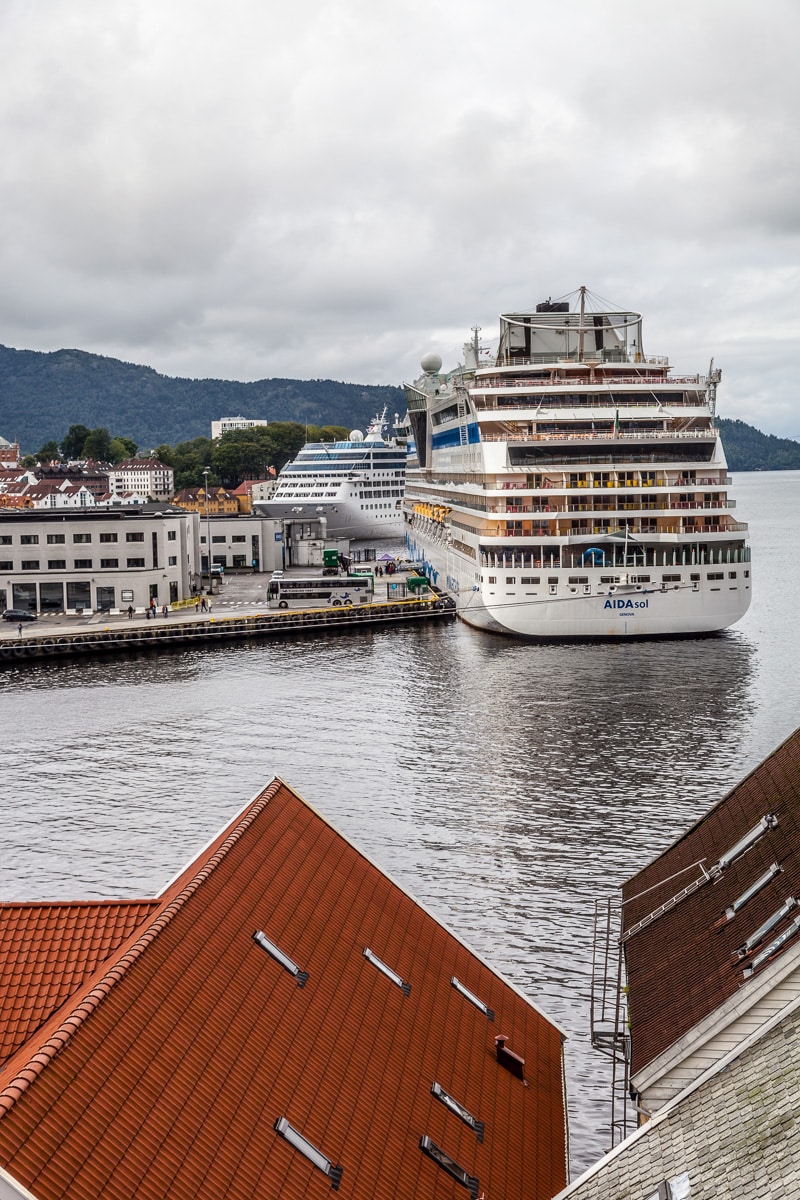 Of course, we were also looking to find some wine to toast our first evening in Norway. But, hmmmm, no wine to be found. This WAS going to be an adventure.

There were a couple of cruise ships in port and the TI office was packed. After a bit of a wait we were able to get maps and advice about things we would want to see, places we should go, restaurants, grocery stores, and where to buy wine. As it turned out, we had been in one of the better supermarkets in town, and beer, wine, and spirits could only be purchased in the government-owned alcoholic beverage retailer Vinmonopolet. 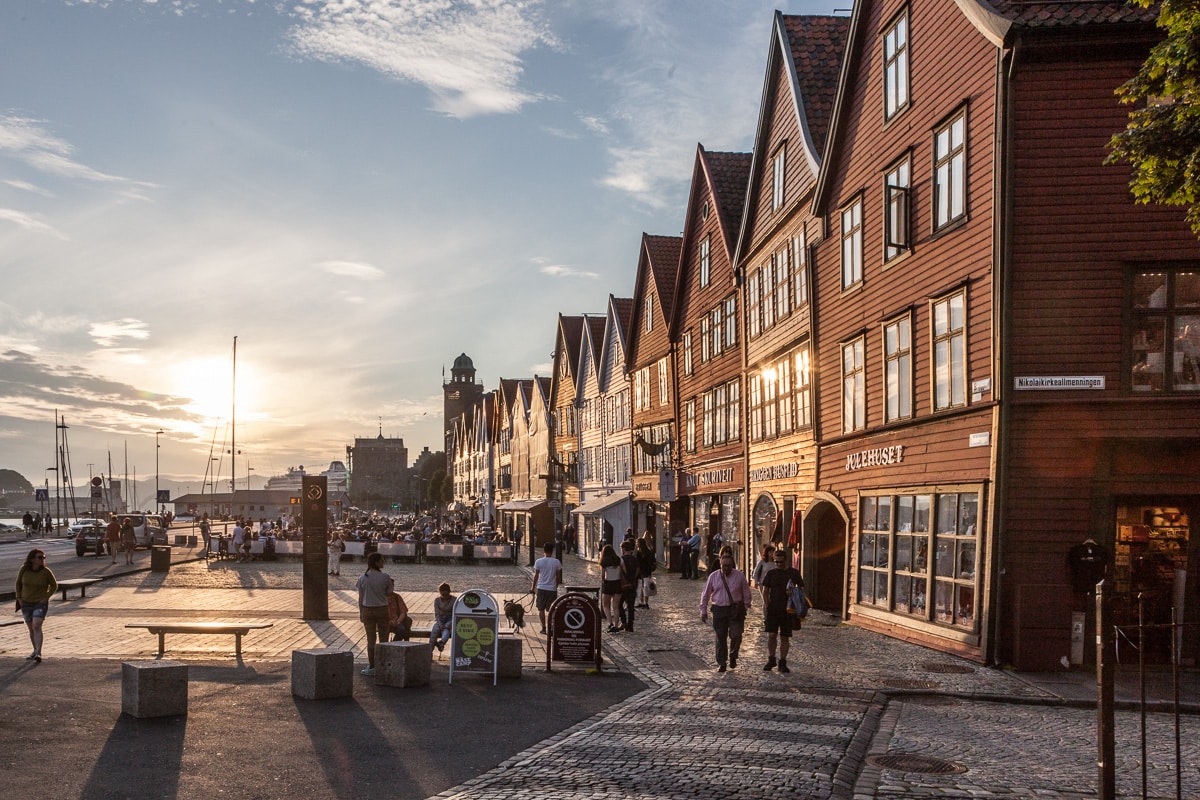 After gathering all the information we could consume, we wandered through the nearby fish market. Though not really a working fish market, most of the facilities are restaurants and food stalls catering to tourists that arrive mostly on bus tours or from the cruise ships. However, the selection of smoked fish, especially salmon and herring was astounding. Over the next month, we would have many opportunities to savor the local seafood both smoked and fresh. 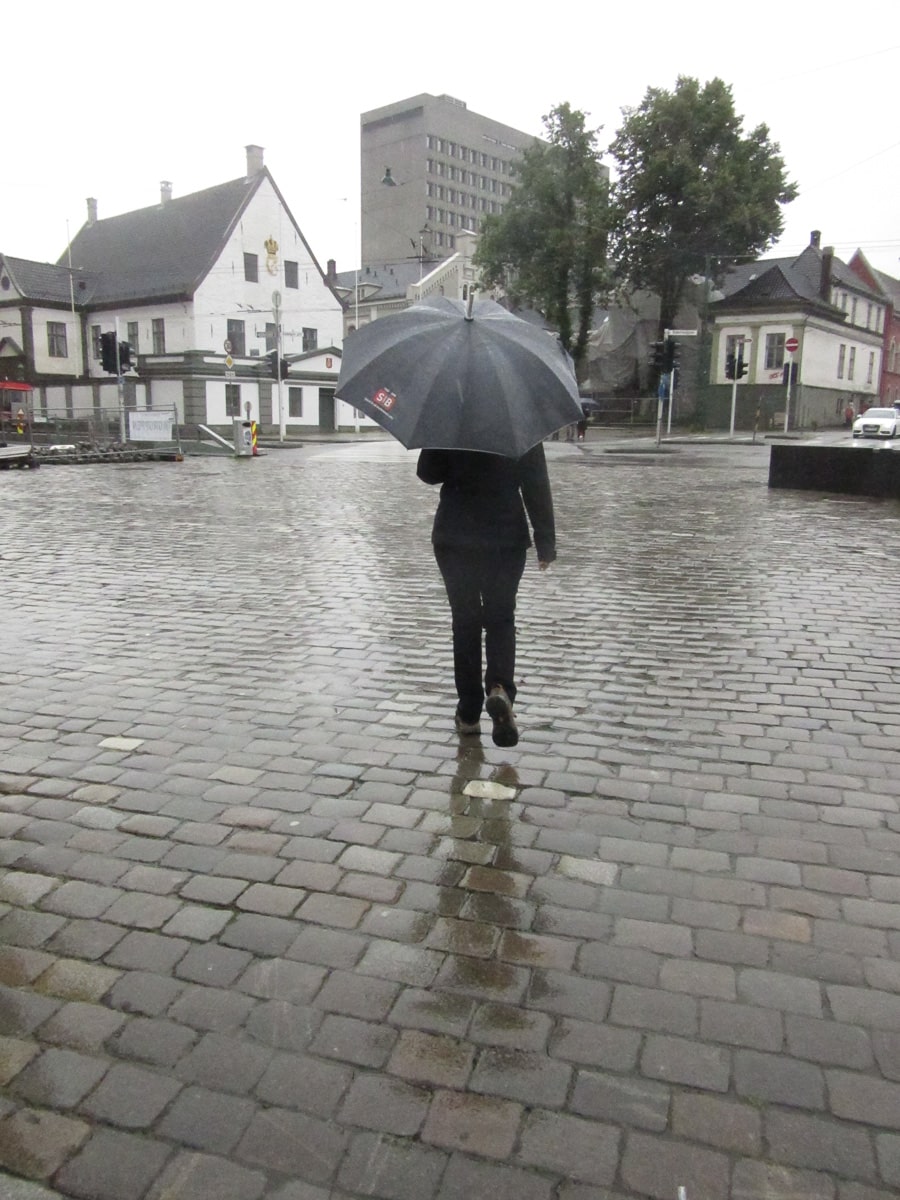 But today, we made our way back to the grocery, where we picked up something simple for dinner and staples for the next morning.

The scene out our apartment windows afforded us a view of white-sided houses with red-tiled roofs that climb the wooded flanks of Mount Floyen. It was as charming a view as we had experienced in any of our prior apartments.

If this sounds a little too perfect, it is, because there is Bergen’s infamous weather, which all too often delivers a wet slap of reality – it rains and rains a lot.