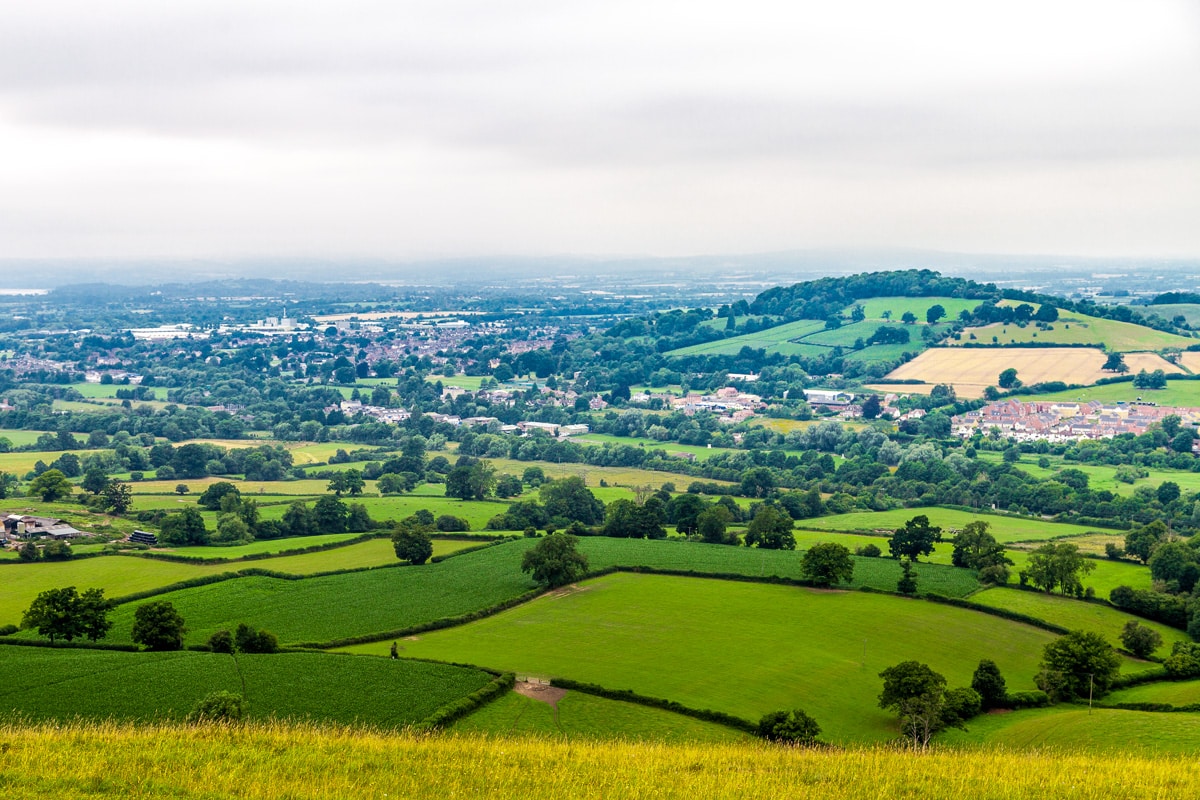 Summertime in the English Cotswolds has been a feast for the eyes. The golden stone buildings, rolling hills, and the green pastures, fields, and woods are visually amazing. But it’s the palette of greens that is so remarkable. It includes such a variety of hues, lightness and saturation that one could never count or categorize all of those colors that one might merely call “green”. 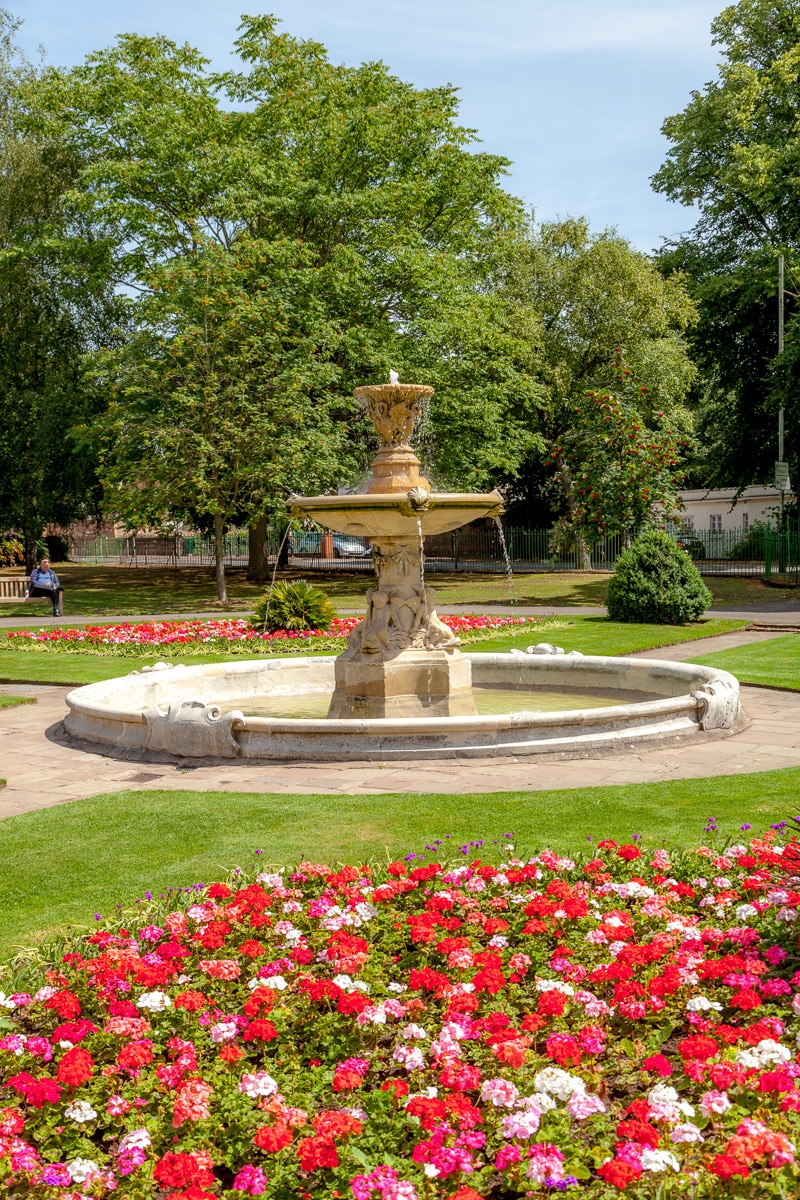 However, the flowers of the English gardens and the wildflowers that appear all over the countryside reveal the balance of the color spectrum.  Whether en masse or individually there are surprises at every turn. Orchids in the pastures and roadsides, colorful sweet peas in the gardens, and hollyhocks along the stone walls, the area is beautiful.

Yet while there is much beauty, there are some beasts as well. 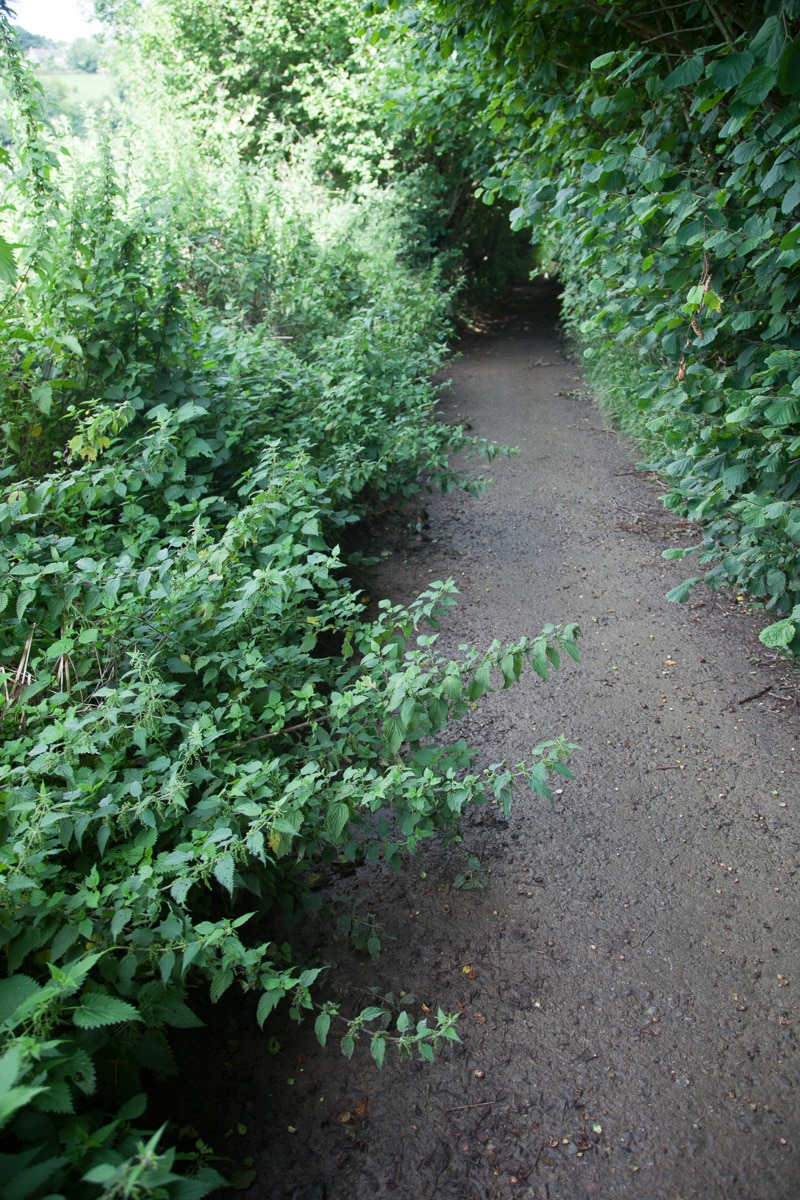 The biggest irritation we have experienced while walking the English footpaths has been the ubiquitous stinging nettle (Urtica dioica), the most common plant in Britain. They are quite literally everywhere. As tall as 1-2 m (3-6 ft), they have the annoyingly bad habit of bending out and over the footpaths where they seem to wait for the careless rambler to pass by. 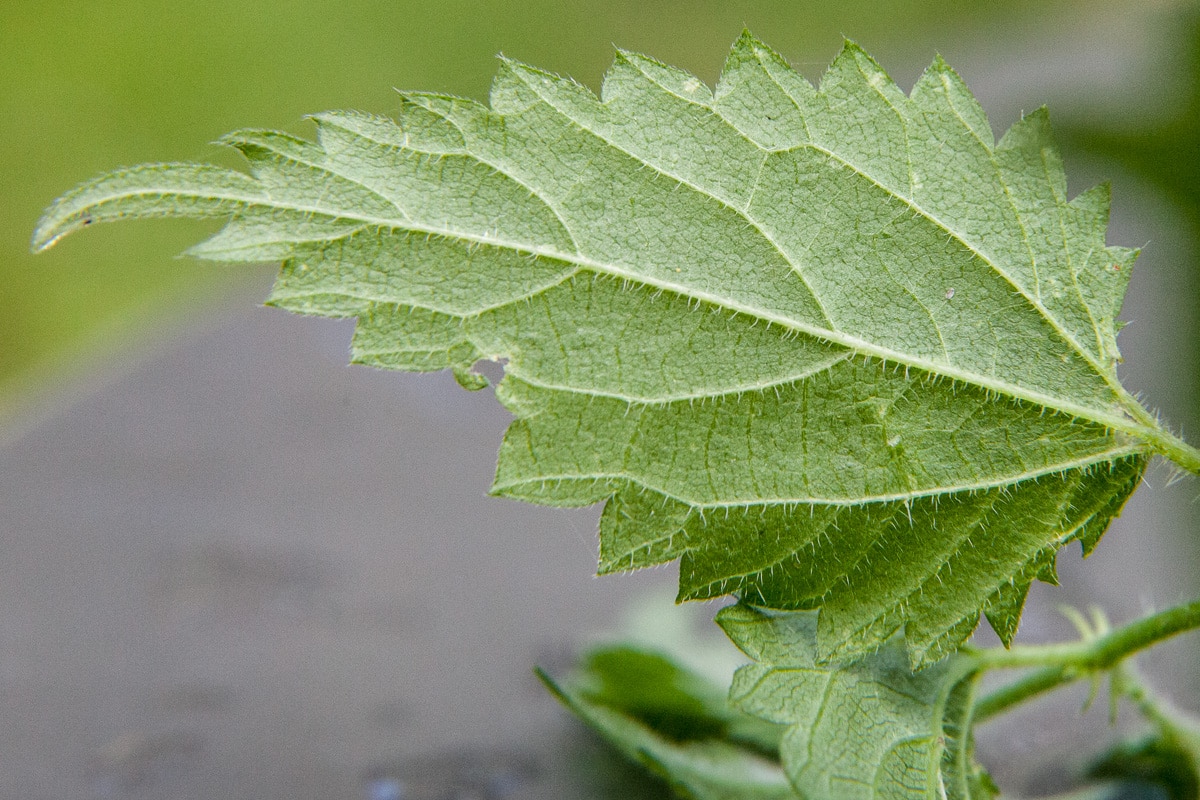 The stems and leaves are covered with tiny stinging hairs (trichomes) that can inject several irritating chemicals into the skin even when lightly brushed. On a positive note, the nettles support over 40 species of butterflies and other insects, and there are myriad folk-recipes that incorporate the plant. Still, I find it rather impossible to like then. 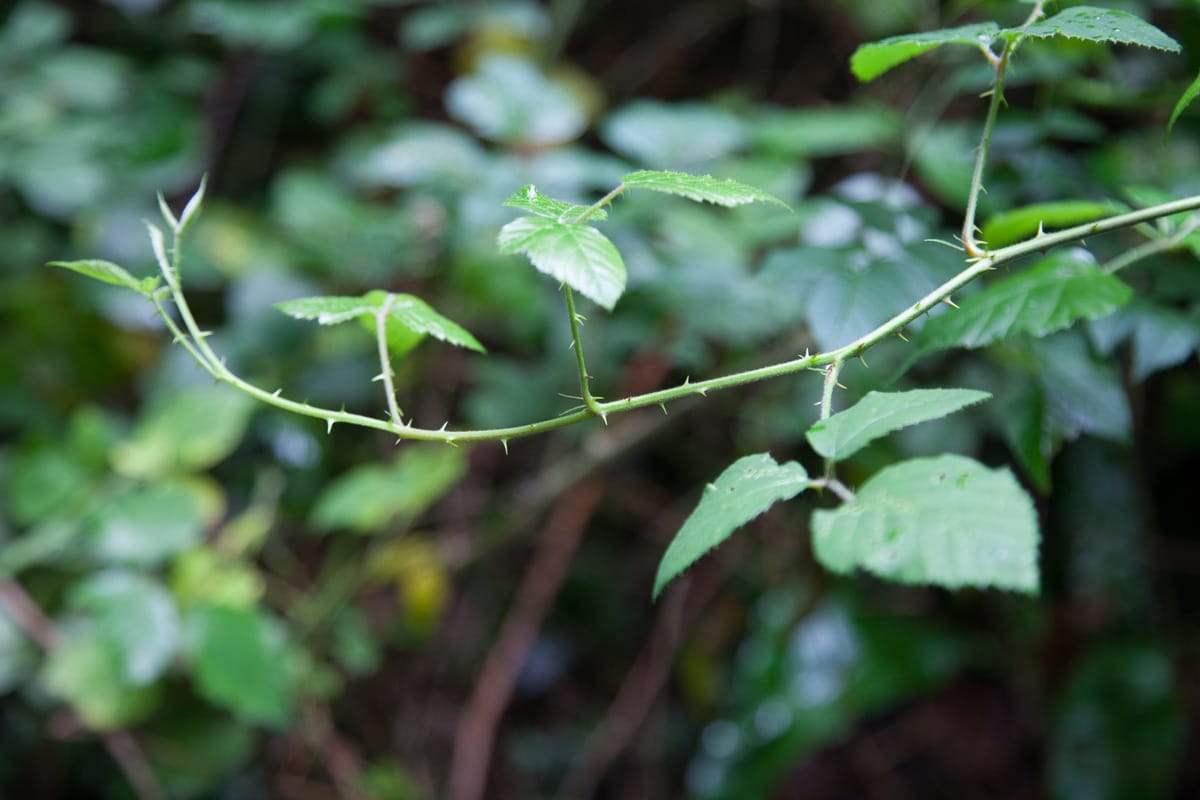 Another notable nuisance is the blackberry (Rubus fruticosus), commonly known as brambles. It also arches out over the footpaths low and high. Covered with sharp, tough thorns which can be hazardous, it can snag firmly and easily tear clothes and skin.  It has at least one redeeming quality, at the end of summer the bushes are filled with blackberries.

There is a lot of variability in the berries at different locations, some are sweet and some are tart, but most are flavorful. Nearly all long walks allow for a lot of sampling. 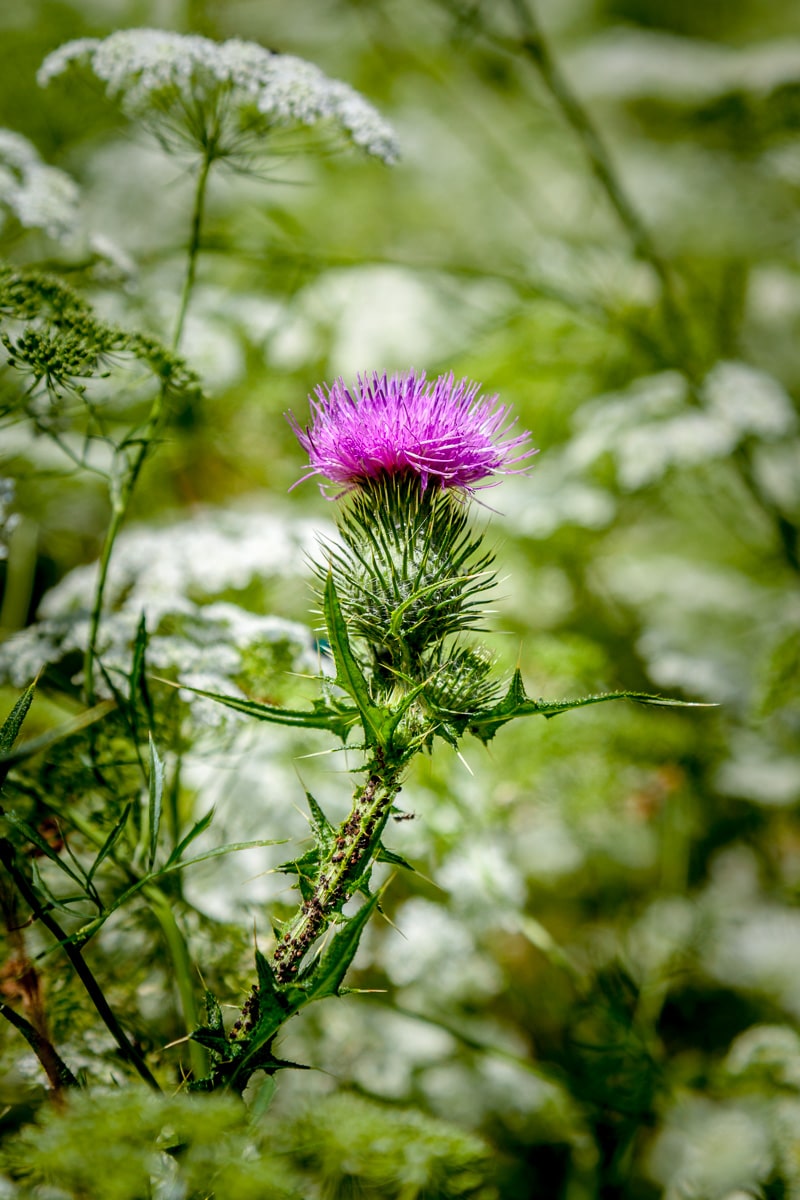 There are several species of thistles in the UK, and they all have developed a defense system of spiked leaves and barbed stem. They not friendly-looking plants, either, they are armored, covered with adaptations to discourage herbivores. It almost hurts just to look at them – except when they are in flower.

A member of the family Asteraceae, like dandelions, the thistle’s flowers appear to come out of a spiky globe in a bushy-topped display of purple (and some may be white or yellow). Each head is made up of hundreds of small flowers, each of which will mature into a fluffy-winged seed ready to take flight on the wind to spread over the countryside.

Yes there a few unpleasant weeds here to avoid, but it’s easy enough to do. We’re so glad that the weather is so much cooler here than some other places, because then we might be tempted to wear short-pants and expose more skin to the beasts of the trail.

N.B. The identification of the species of plants beyond the common name may or may not be correct. Significant guessing was involved, and corrections are invited.