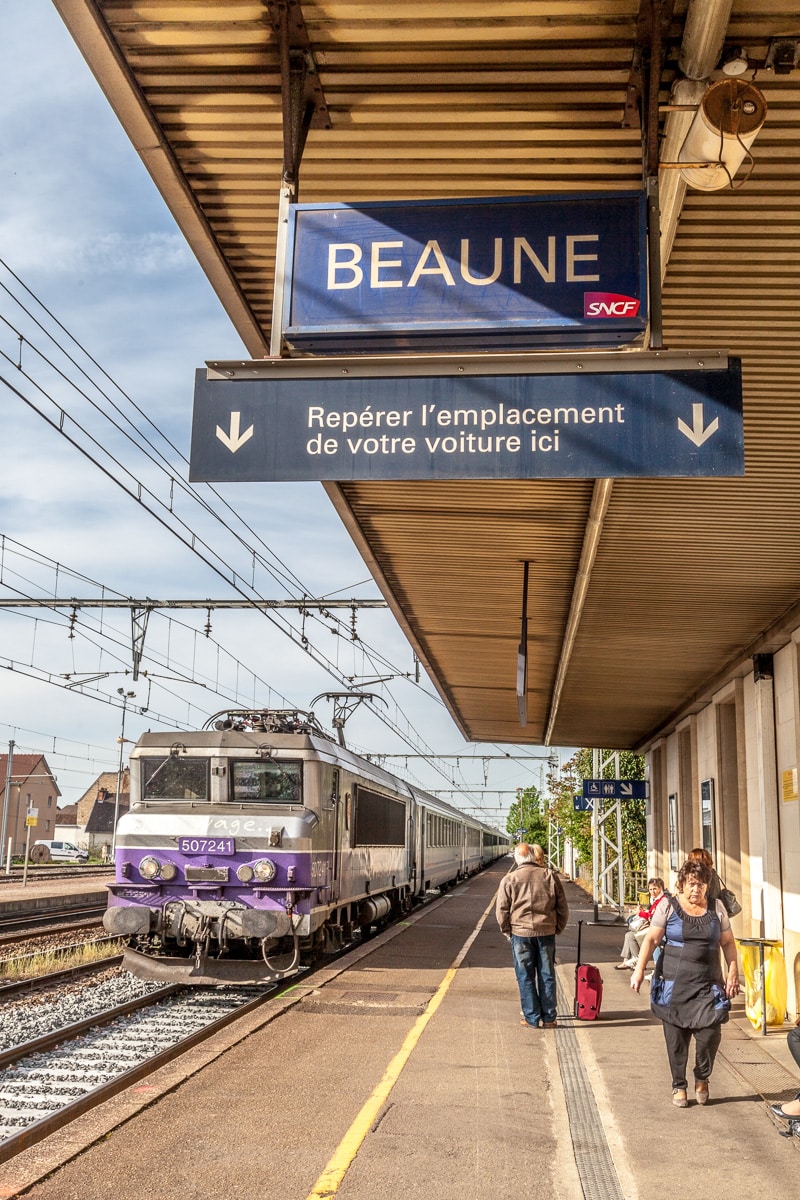 We seem to have gotten pretty good at train travel here in France. Not that we have figured it all out, but we’re working on it.

For example, there are kiosks all over the train station, but our credit card does not have the chip-and-pin technology that is prevalent here. We have the chip, but not the pin part. Our debit cards do have chip-and-pin, but there are greater transaction fees associated with them so they are rarely used. In order to use our credit card, our signature is required, so we go into the ticket office for our travel purchases. Not that it is a bad thing, as we do get to practice a little French until the person behind the counter starts speaking English.

Another little tip we have found useful is to first do our research on-line regarding all of our travel destinations, dates and times, and to write it all down. This way we can hand it to the clerk and reduce any potential confusion. Of course, we have to remember to use the European date format day/month/year rather than the US month/day/year.

Armed with our desired written schedule, we went to the ticket office at the train station, got our number for the queue and patiently waited. The entire process went very smoothly and we soon had our tickets for the next day in hand.

Arriving at the station, we made our way to the appropriate voie (track) and soon boarded our train for an overnight in Beaune.

Beaune is the center of the Burgundy wine region and the primary wine auction in France is held there. It is all about the wine, it is a town dedicated first to the wine industry (i.e. tractors, harvesting equipment, vats etc.), and tourism is secondary. Even so, there are many things to see and do. 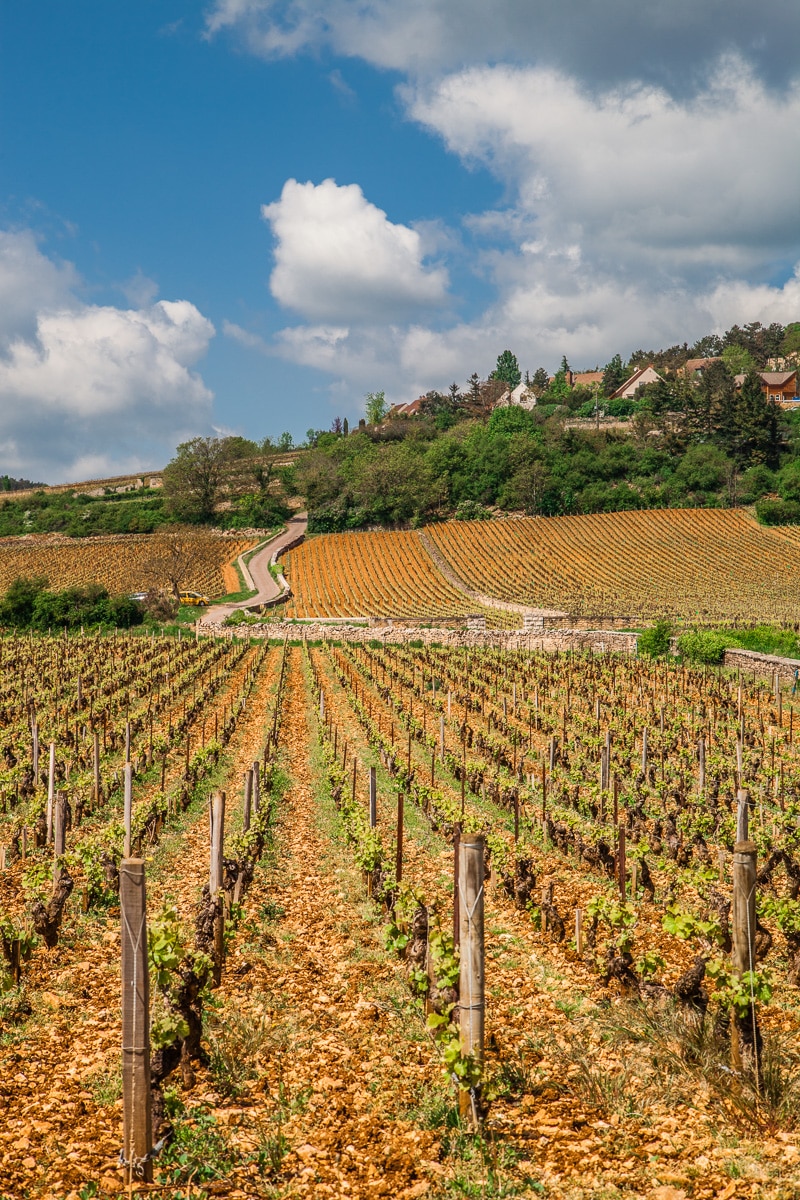 Our morning was dedicated, as usual, to wandering the town. We had stopped by the tourist information office to get a plan de ville (city map), and then followed the ramparts on top of the old fortification walls. We were in search of the gardens on the northwest side of town where it was possible to walk out into the vineyards along narrow, centuries old roads up into the hills of the Côte d’Or.

The Parc de la Bouzaize was an ideal location for a picnic, so we found a comfortable bench alongside the tree-lined lake and ate the sandwiches we had purchased in town earlier. Mine was a standard, though tasty jambon et fromage (ham and cheese) on a buttered baguette, and Jeannie tried a delicious new sandwich we had not encountered before – a buttered baguette with rosette salami and brie cheese. We have subsequently added this sandwich to our repertoire of favorite homemade lunches.

It is the wines that make this area famous, and wines have been cultivated here for over 2000 years, first by the romans who brought vines to the area. The Côte d’Or or the golden slopes are composed of clay-limestone from the Jurassic era created from the ancient seas that once covered the continent. These slopes are covered with limestone and stone rockfall that create the special soils their characteristics known as terroir, and gives the grapes that are grown here, chardonnay and pinot, the unique qualities that have made them world famous. 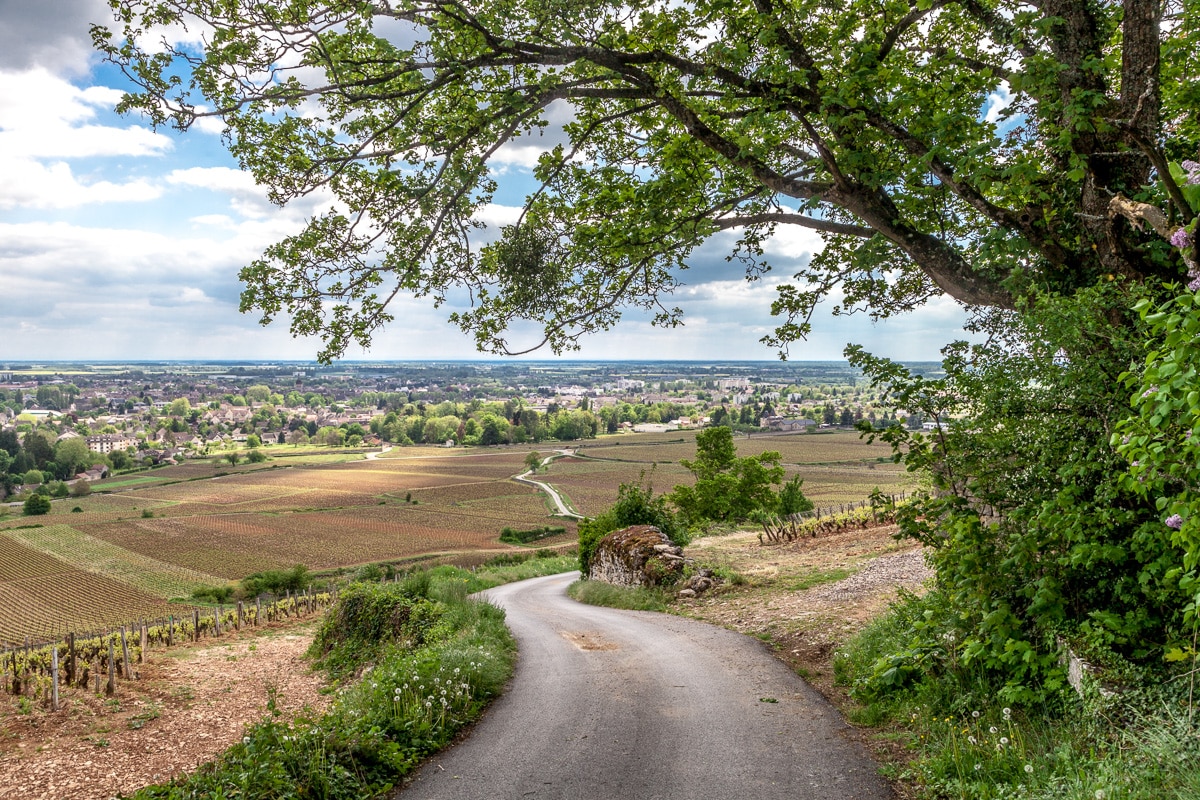 As we walked outside of the town on the narrow road between the plots that compose the many small vineyards of the area, we began to climb upward on the steep road. Surrounded by the short, thick vines that were just beginning to flush out with this seasons growth, we turned and could see all of Beaune and into the distance. Though the day started out somewhat cool, the jackets came off as we continued to climb.

After walking a bit further on the side of the hills, we made our way back down through the vineyards and eventually back into town. Stopping briefly at our hotel to freshen up, we arranged for reservations at a small restaurant nearby. Then it was off to a wine tasting.

Fortunately for us we were prepared, since only a few days earlier we had a wine tasting with Shannon Tesseyre of “From Vine to Wine”. Shannon helped us understand the basics of the history, geography and geology of the Burgundy region, and selected wines to illustrate the differences in terroir and other factors that contribute to the complexity of these famous wines. The best part of Shannon’s wine tasting was that it was tailored to what we were looking for – to learn more about the wines where we were.

As I’ve said, wine is really important here. The most famous wines produced are commonly referred to as “Burgundies”. These are dry red wines made from Pinot noir grapes and white wines made from Chardonnay grapes. However you will not find the words “Pinot Noir” or “Chardonnay” on the label.

The soils of Burgundy are extremely varied, in their richness, depth, and mineral content. The soils can vary within a single area — for example, from the top of a hill to the bottom, or from one vineyard plot to the next. The amazing thing is that a discriminating palate can discern the subtle differences between one vineyard and the next, and each vineyard may only be 20 meters away. 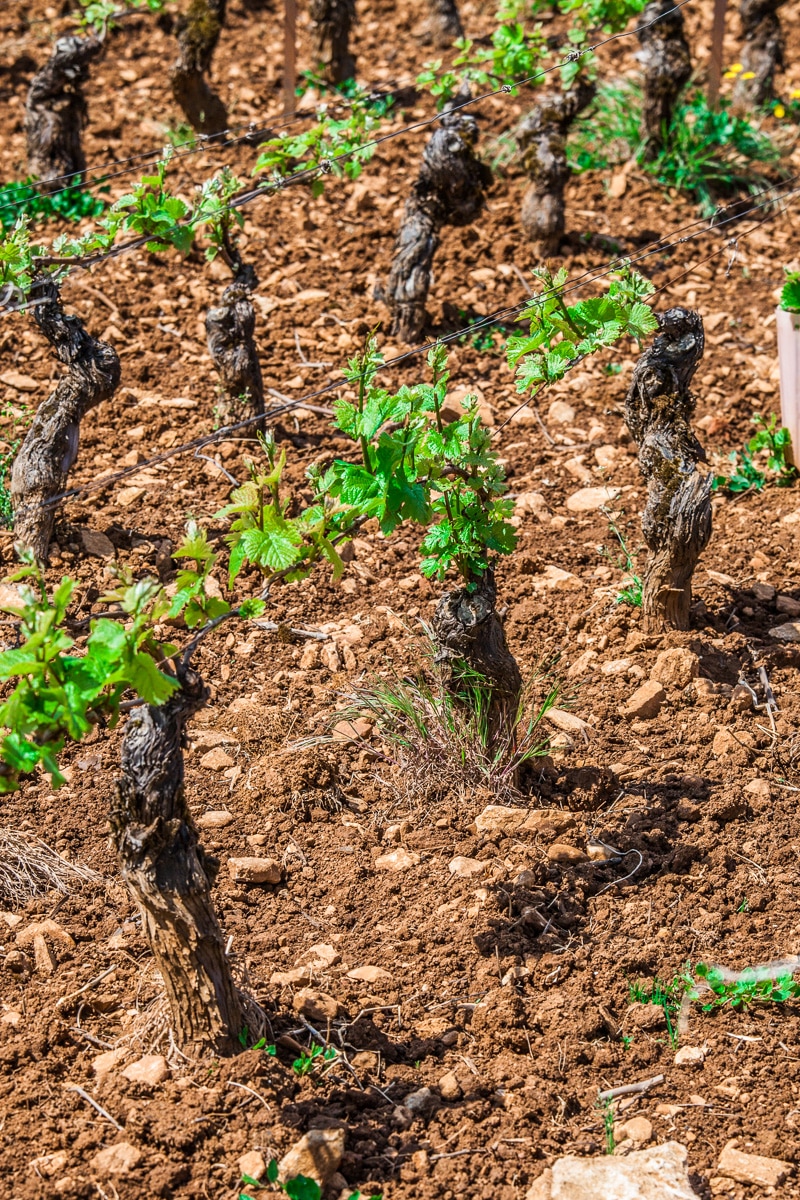 Unlike the Bordeaux region in the west where the wines are produced on large estates referred to as Châteaux, Burgundy is composed of thousands of small growers, often on tiny parcels of land. Because of the multitude of small vineyards, the wine production occurs in three ways, the first is through negociants, who buy the grapes or wine from several smaller producers and sell it under their own names. Second are cooperatives that are organized groups of grape-growers who pool their resources to produce their wine. And the third method involves producers wh

o own vineyards and a winery, because of the costs involved in building and maintaining winemaking facilities this is less common.

To navigate through this labyrinth of wine production, Burgundy’s classification system is considered the most complicated in the world, so I won’t go into it here. However, a little knowledge surely helps to decipher the many labels. 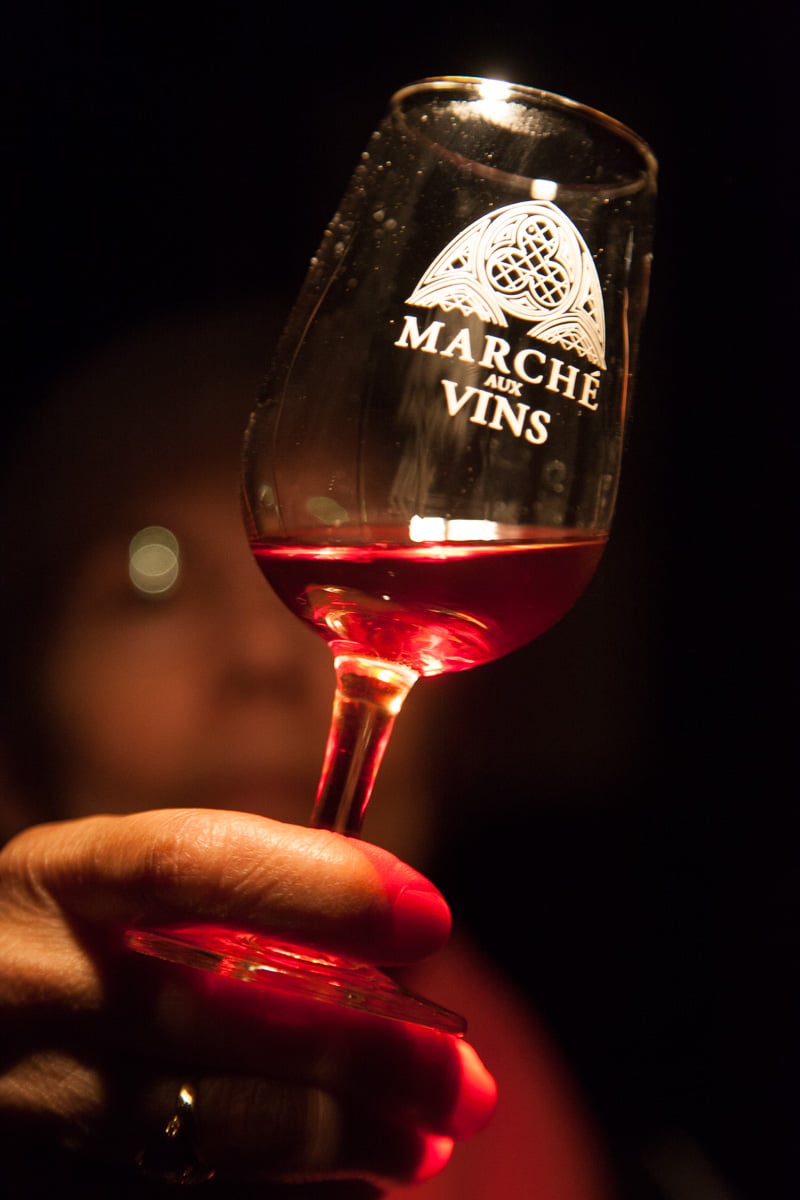 Our tasting was at Marché aux Vins, a negociant, located in the 15th century Eglise des Cordeliers (Church of the Cordeliers). Of the tasting options, we chose to try six different wines from the region.

We were given our glasses and directed down below the old church in what was likely the crypt at some time in the distant past. The dimly lit spaces, carved from stone were now the tasting rooms. In each successive chamber there were racks of the wine that we would be tasting and notes on their origin. In the center of each area was a wine barrel table with an open bottle for us to sample.

he low light and musty odor that accompanies cellars and ancient places added to the ambience. Since it was later in the afternoon, we were alone. In the silence the wine softly splashed from the bottle into the glass. Small spotlights allowed us to examine the color in the glass before swirling it to release its fragrance for us to savor. Only then would we sip the liquid allowing it to coat the tongue and in doing so, discover the various flavors that the grapes had developed on the vines, acquired from the earth, and then guided by the vintner. 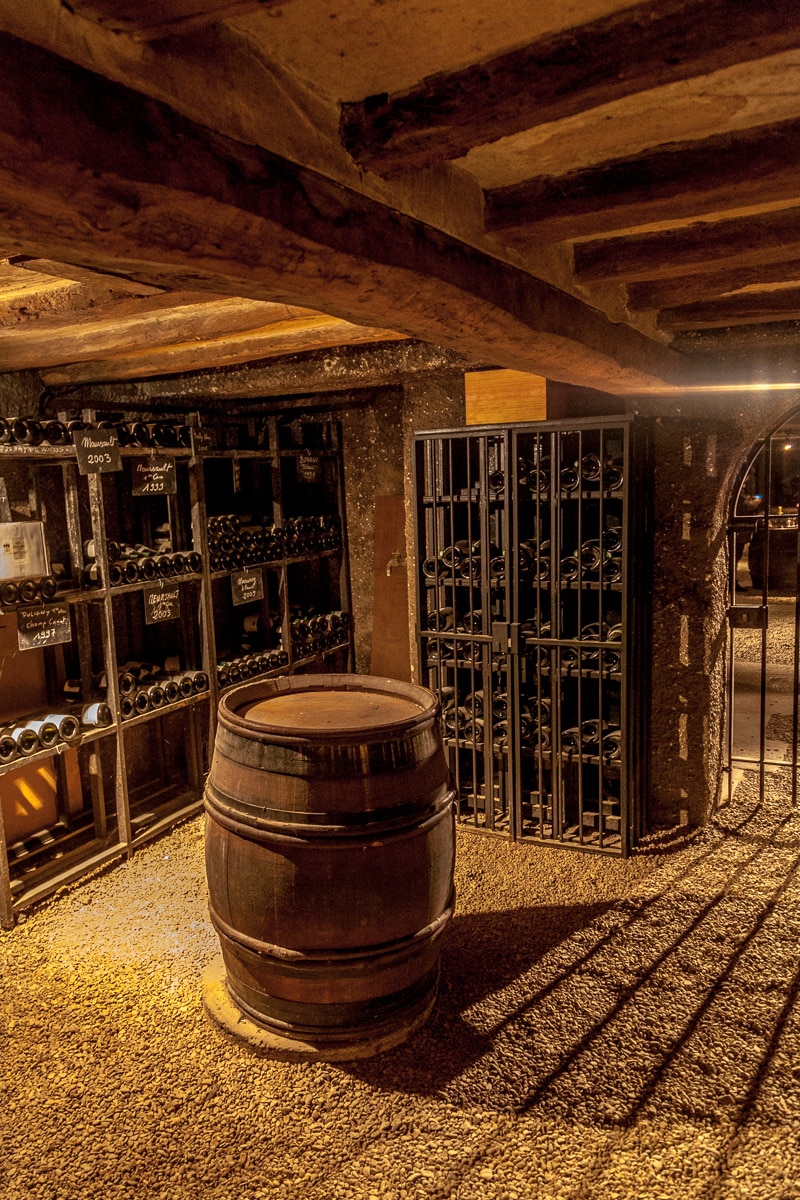 TThough one isn’t supposed to drink wine when tasting, so that the alcohol doesn’t influence the evaluations over time, we enjoyed the wine more with each sip. Each wine had its own distinct character. Some likely needed food to help bring about the physical and chemical changes that make wine so good with food. But we had our favorites, and though we didn’t purchase any wines, we came away with a greater knowledge of and appreciation for the diversity in the wines of the region.

It was good that we had a few hours before dinner. We took the time to stroll through Beaune now that the tour buses were loaded and gone. The locals were emerging as we sat at a table outside a bistro and drank a glass of wine that we had merely tasted earlier. A plate of thinly sliced jambon sec (somewhat like prosciutto) with some baguette pieces made the afternoon complete.

The sun was sinking lower as we walked the short distance from our hotel to the small restaurant where we had reservations. The meal was flavorful and delicious, and as we returned to our room, we knew we would sleep well.

The next day we will visit Dijon, but that’s tomorrow.