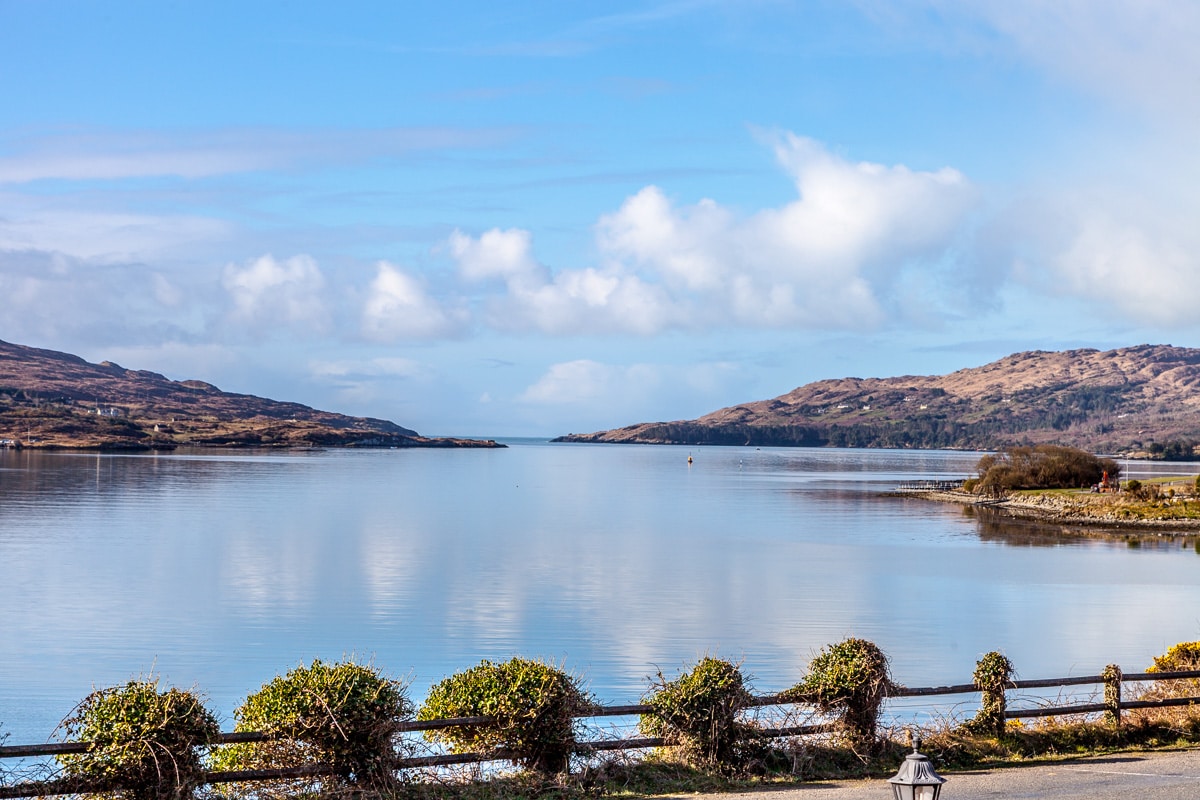 Our stay in Castletownbere was enjoyable. The Sea Breeze B&B was very comfortable, and though it was a long walk into town, it was scenic and pleasant. Wandering about, it was apparent that this was a working fishing town. One of the five main fishing ports in Ireland, it is the largest whitefish port in the country, and the 2nd-safest natural harbor in the world.

A few fishing boats large and small were lined up along the docks across the bay, though most were likely out at sea. The smell of the ocean was brought in on the fresh breeze that wound its way through the streets occasionally picking up the fragrance of recently caught fish.

Stopping into a small pub, we enjoyed a pint of Smithwick’s ale and a bit of conversation with the barkeep. The place was quiet except for a football (soccer) game was playing on the TV in the corner and a couple of locals having a conversation in Gaelic (Gaelach). 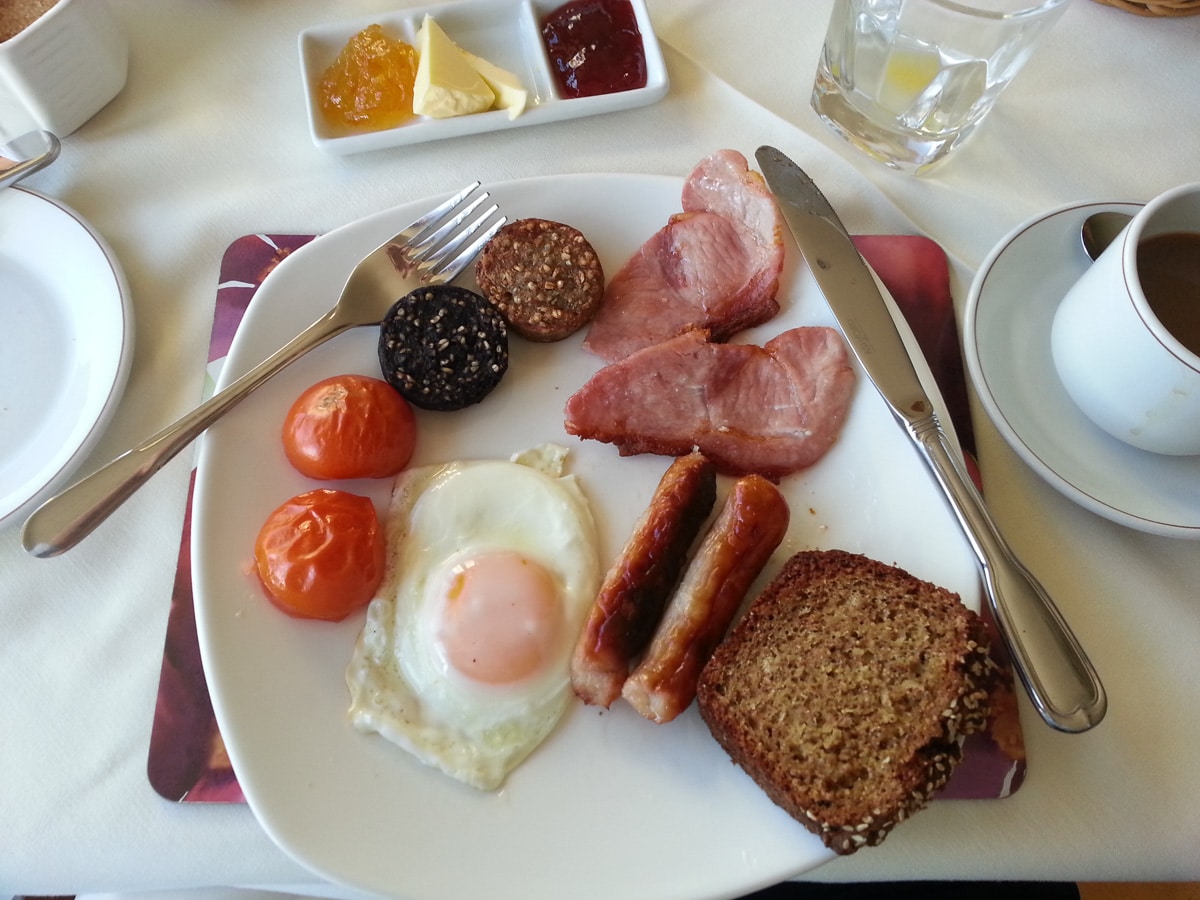 A good night’s sleep and a hearty Irish breakfast at the B&B had prepared us for the day ahead. Noralene, who along with her husband Aidan, have been running Sea Breeze for 20-years, made some recommendations to our route for the day.

After departing the B&B, we made our way back through town and up onto the slopes of the mountains that gently meet the sea here. Our target was Dereenataggart Stone Circle, not too far out of town. 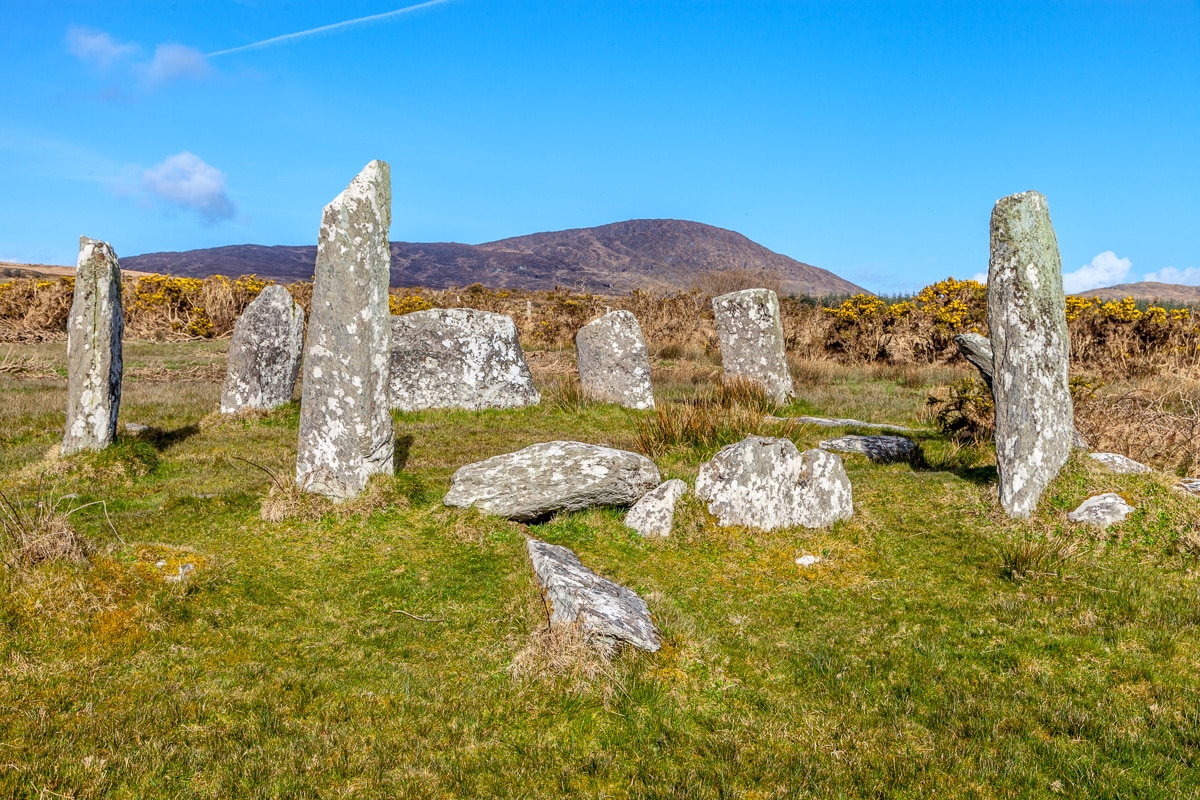 Of the original 15 stones in the circle, only nine of them are still standing, three of the stones have fallen, and there are three missing stones. With a beautiful view of Bere Island to the south, this is another wonderful example of megalithic men choosing an outstanding location for their monuments, whatever their purpose.

Our plans had been to drive up the southern coast of the Beara Peninsula to Glengarriff, bypassing the Healy Pass that rises high above Glanmore Lake crossing the Caha Mountains as it would have been out of the way. But Noralene at our B&B urged us to drive up the pass for the beautiful vistas and views of both coasts from the top. Besides, the distance across the pass and back wasn’t as far as it looked on the map and we could still travel on to Glengarriff. 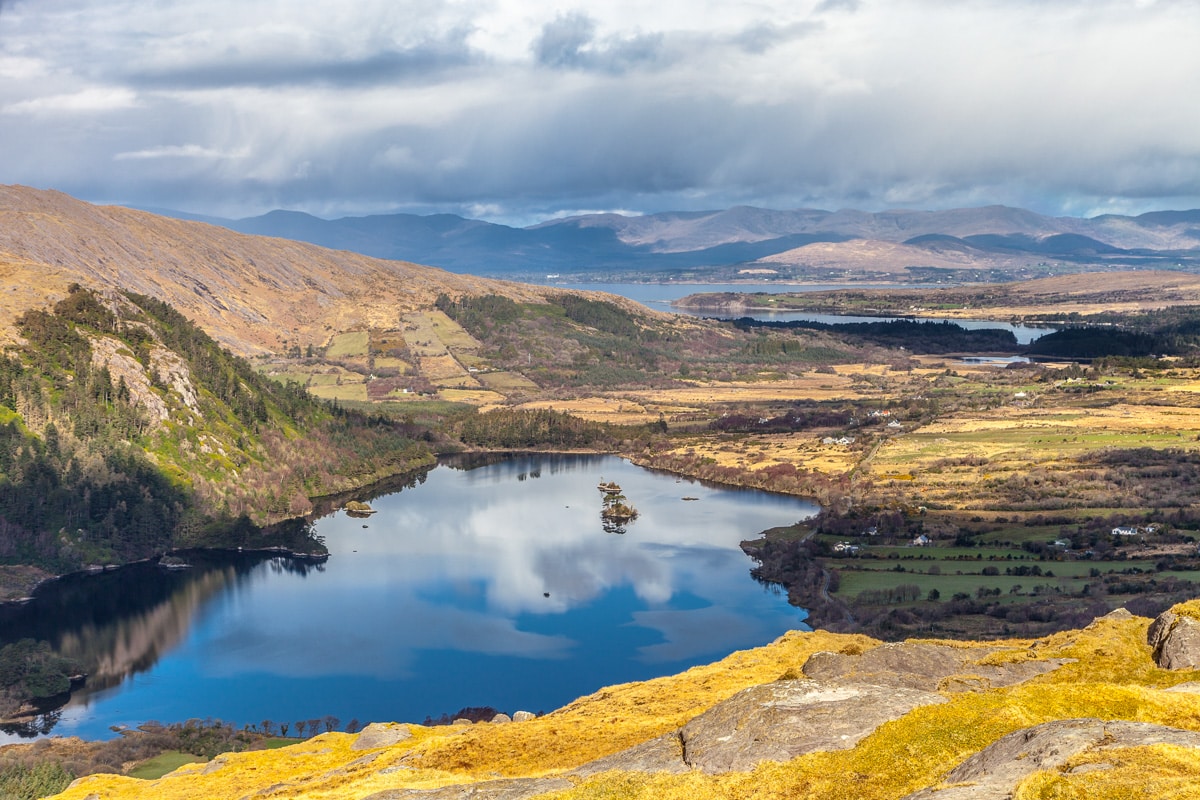 Indeed, it was advice well taken. The pass was indeed spectacular, and the winding road, although narrow, was in good condition and fairly free of other traffic. We descended part-way down the far side of the pass close to where we had been the previous day. There we turned around and retraced our route.

As we drove along Bantry Bay, we were treated to even more beautiful scenery. The North Atlantic waters weave their way into all the waters surrounding the peninsulas of Ireland, and the deep blues and brilliant aqua hues glistened in the sunlight of the clear sky. 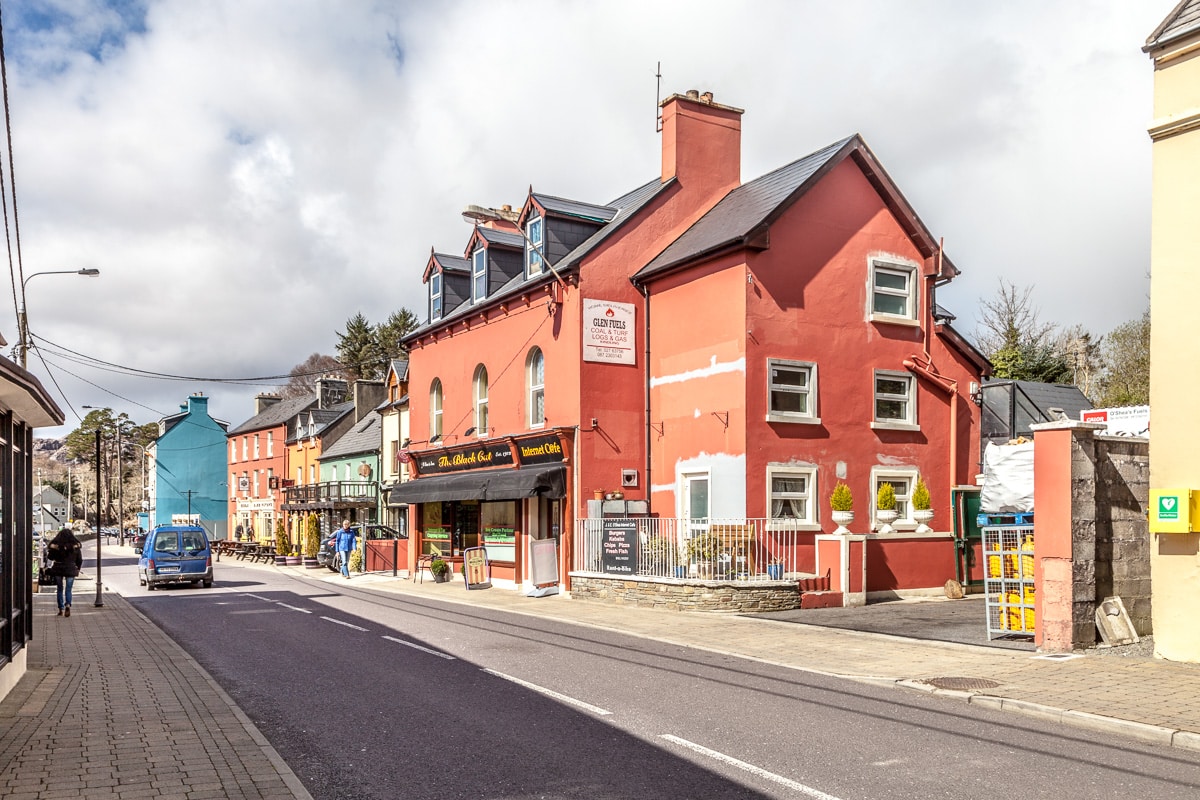 We arrived in Glengarriff just about lunch time, so the first order of business was to choose between the two or three pubs and restaurants for lunch. Some hot soup and a sandwich provided hearty meal to continue the day.

This route was very different from the way that we took to get to the Beara Peninsula. To get to Kenmare, to start the circuit, we had to again cross Moll’s Gap, a beautiful, but twisting and narrow pass that we had traversed several times. So, from Glengarriff we took roads that gave us a less mountainous and very different view of the countryside on our way back to Killarney.

Along the way, we stopped at the Bonane Heritage Park where we could walk amongst the remains of an ancient ring fort, a stone circle several other archaeological sites situated along the gravel trails. 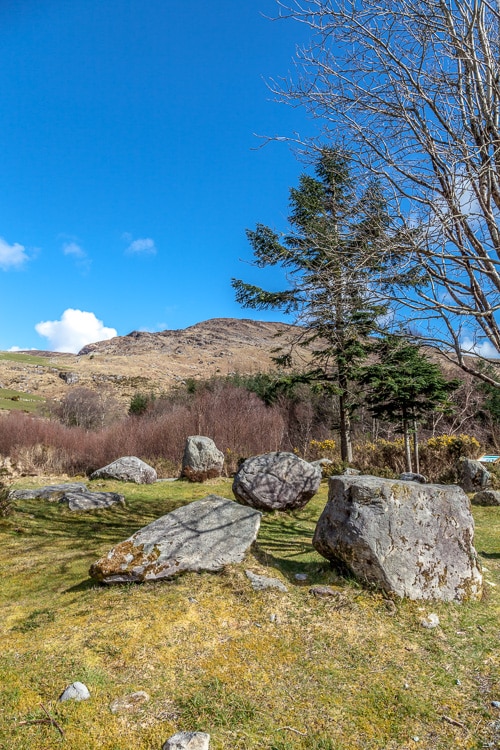 The first site was the Dromagorteen Ring Fort. The fort, dating from the 1stC, is approximately 30m | 100ft in diameter and consists of an outer earthen bank with a deep ditch between the outer and higher inner banks. The structure is not immediately obvious, though once it was described on the information boards nearby it became clear.

Not far down the path was the Dromagorteen Stone Circle, consisting of thirteen stones, with a centrally located boulder burial. Known locally as the “Judge and Jury”, there are several solar and lunar alignments associated with this site, one of these phenomena only occurs every 18.6 years and involves other stones on the distant horizon.

After a couple of hours wandering this site, we departed for Killarney and home where, after a good home cooked meal we once again slept soundly in familiar surroundings.