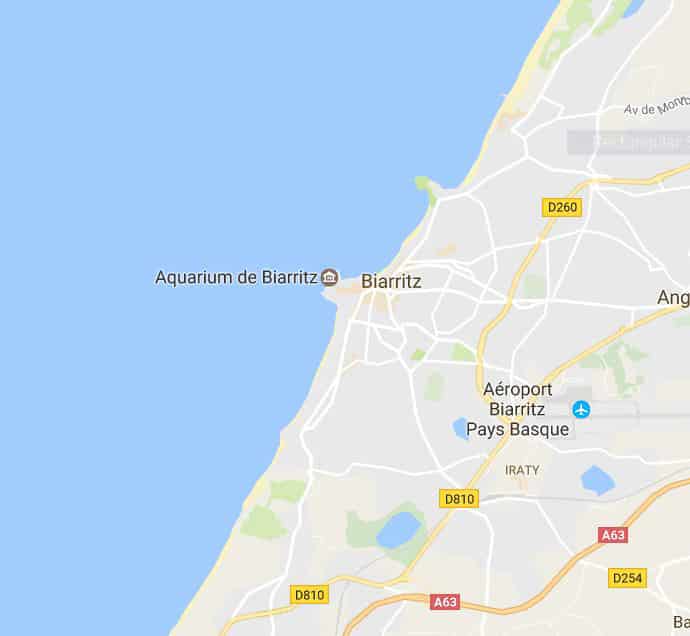 Planning a two night trip to Biarritz on the French Atlantic coast required a bit more thought than one might think. Since it is just over 300 km (180 mi), too far to walk, and we don’t have an automobile, there was research to do, calculations to make, and scheduling to consider.

Obviously, the first major consideration was transportation. We usually prefer to travel by train when possible. But the train to Biarritz would have taken 4-5 hours including a train change, and wasn’t inexpensive, even with a senior discount.

The other option was to drive. Since we rent a car for extended periods when we are in the US, we have accrued enough “points” for several days of free rental, so we decided to cash them in. Driving would take about three hours or so, and would also allow some flexibility. Of course there other expenses associated with driving including tolls and gas (about €50 or $56 each way), and parking at the hotel, etc. 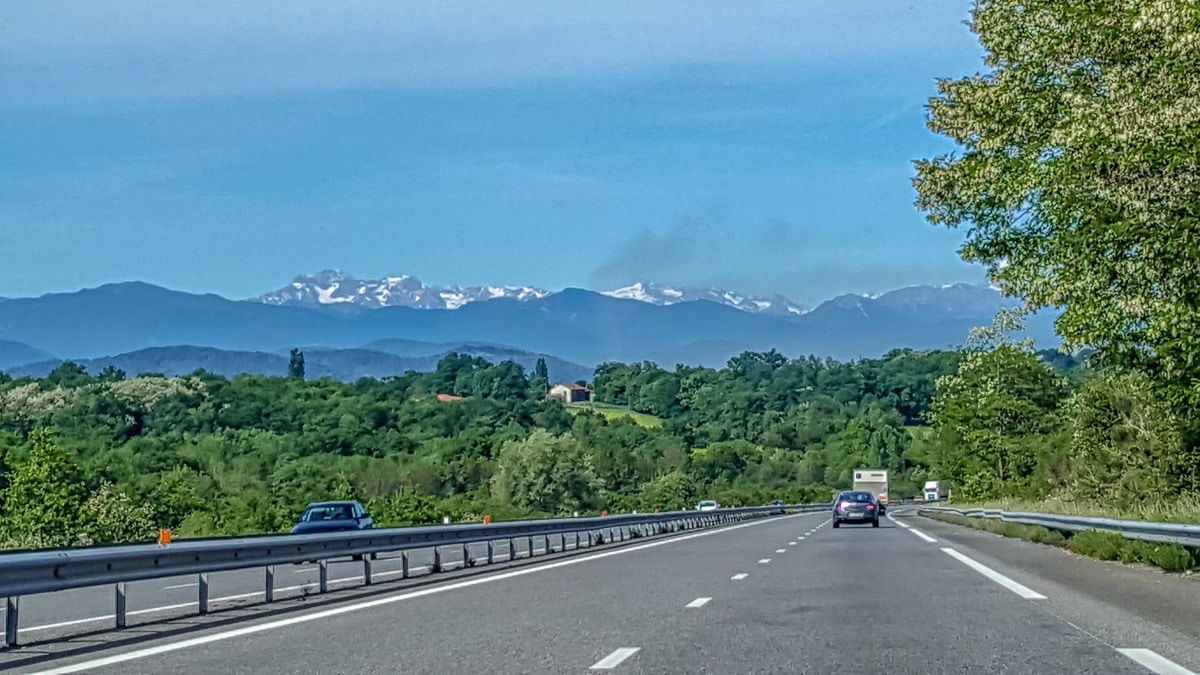 Ultimately we decided to drive and after consulting the weather forecasts, we set a date and reserved a car and a hotel room in Biarritz. When the day to go arrived, we packed our backpacks, a small carry-on and my camera bag and set off for the rental agency at the train station.

Getting out of Toulouse was like driving out of any big metropolitan area. Big motorways 3-5 lanes across, merging traffic and the like were familiar. We were soon out of the city and the flow of traffic calmed as the landscape changed from apartments and commercial centers to farmlands and pastures. 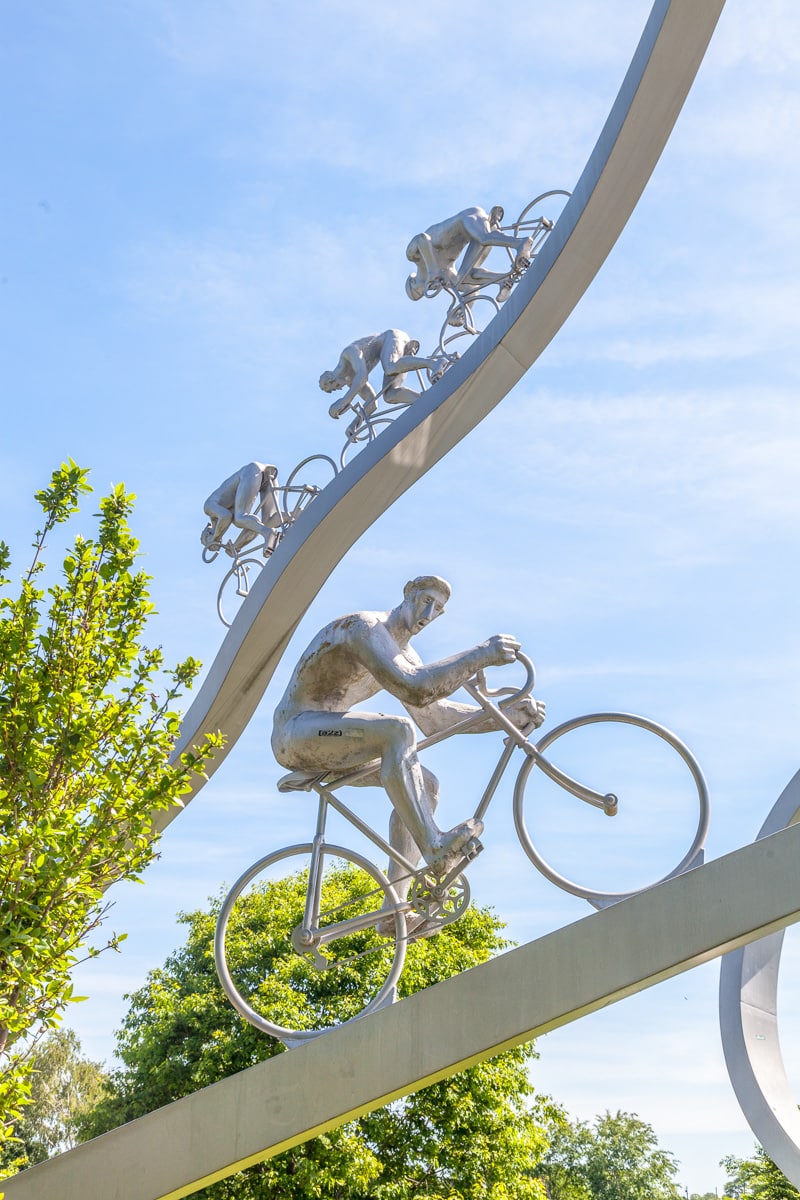 We stayed on the motorway heading West-by-Southwest, and it wasn’t long before the massive, snow-capped wall of the Pyrenees Mountains came into view. Forming a natural divide between France and Spain, the Pyrenees stretch about 491 km (305 mi) from the Atlantic Ocean to the Mediterranean Sea reaching a height of 3,404 metres (11,168 ft). For us, the Pyrenees are legendary as they are featured in two of cycling’s grand tours, the Tour de France and the Vuelta a España (Tour of Spain). The stages held in the Pyrenees are often decisive legs of both tours, and provide for exciting bicycle racing, often weeding out the weakest riders from the rest of the peloton. We even visited an impressive monumental sculpture dedicated to the Pyrenees stages of the Tour de France along the highway as we moved eastward. 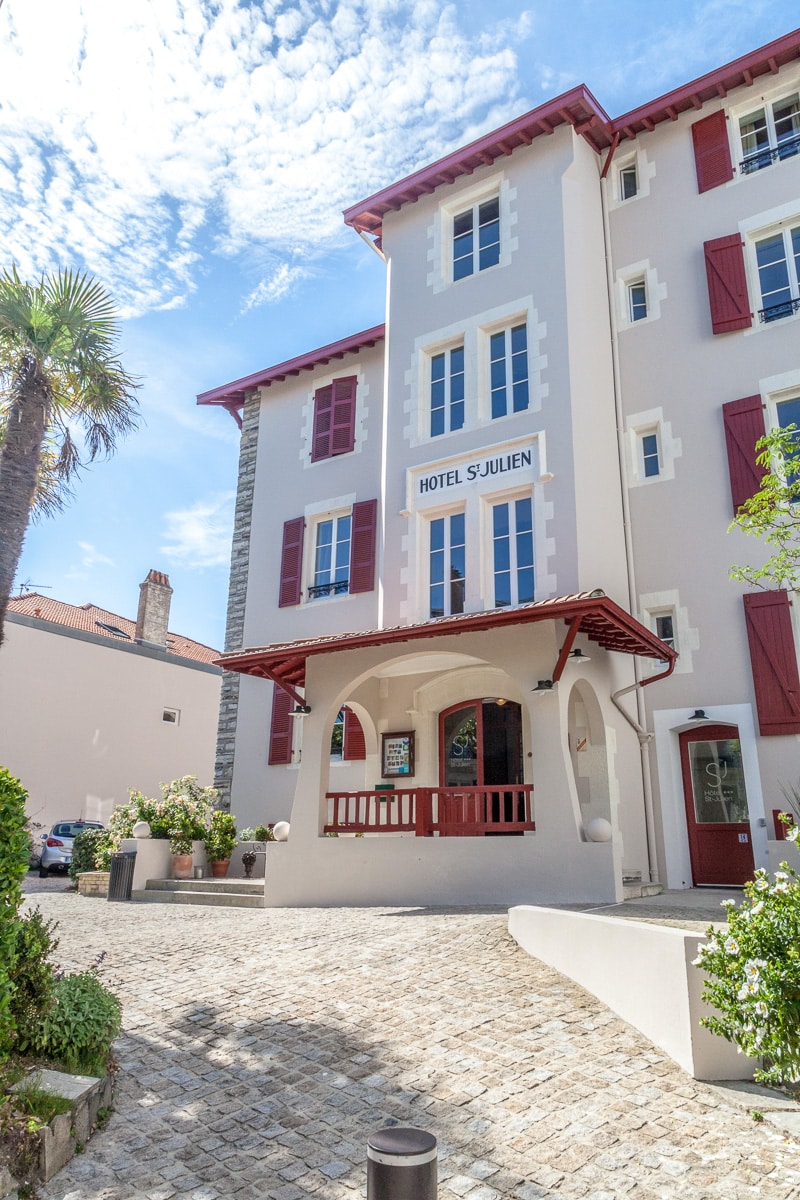 Before long we made it into Biarritz and found our way to our hotel, the l’hôtel St-Julien. We were warmly greeted by the staff and after getting settled into our very nice room, we were given ample information to begin exploring this rather famous surfing town.

Yes I did say surfing town. While that may come as a surprise to non-surfer types, older surfers know of Biarritz at least from the pages of Surfer magazine. It is documented that surfing was brought to Biarritz in 1956 by Dick Zanuck (son of famous film executive Darryl F. Zanuck) – sort of. It turns out that the younger Zanuck was an avid surfer and had his longboard shipped to France, but had to return to the US before it arrived. Fellow Californian and screenwriter Peter Viertel, who was still in France, took delivery, and with it he surfed waves for the first time on the Côte des Basques for himself. The rest is history. 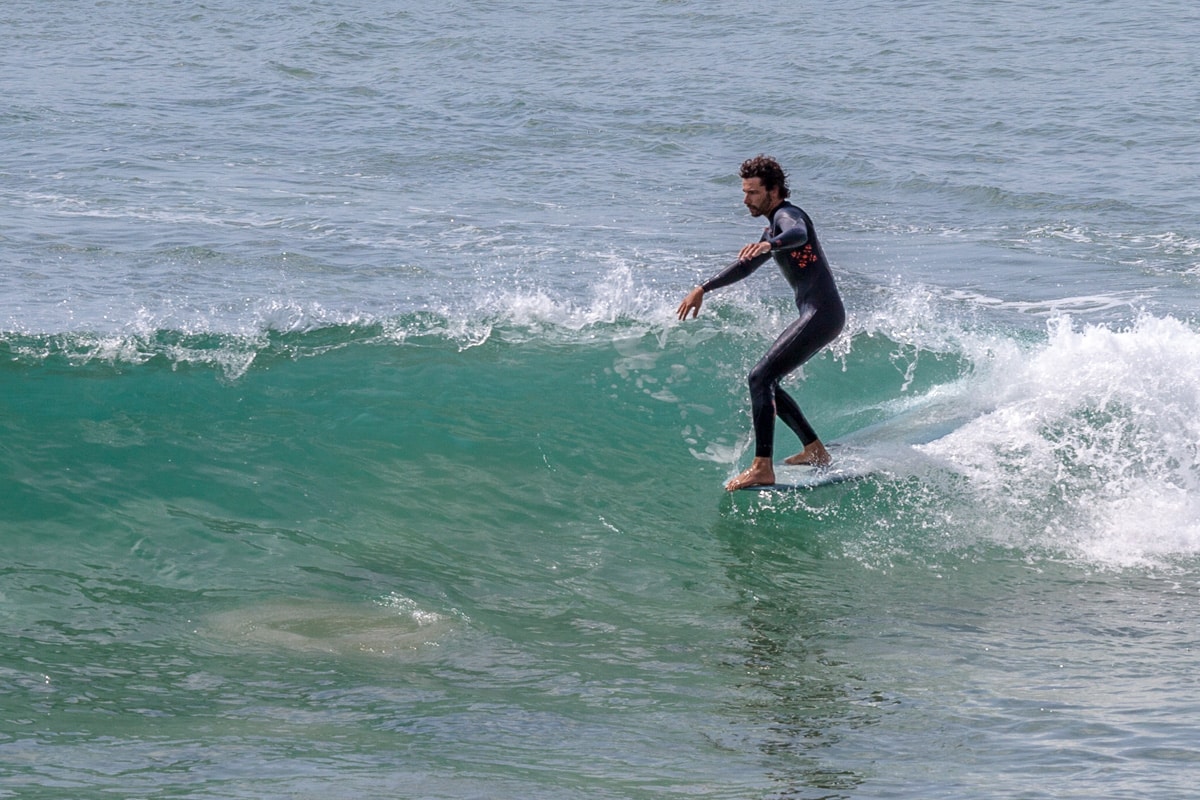 While we were there, there were some very nice little waves being ridden. But the water temperature was still quite chilly and everyone in the water was wearing wetsuits. We on the other hand had plenty of walking to do to see this beautiful little seaside town.

The place was obviously a town that catered to a holiday crowd. Since we were there before the season, the beaches, streets, cafes and restaurants were busy but not crowded; though we were informed that during the summer vacation season the place becomes a hot and very crowded madhouse of traffic and wall-to-wall people. 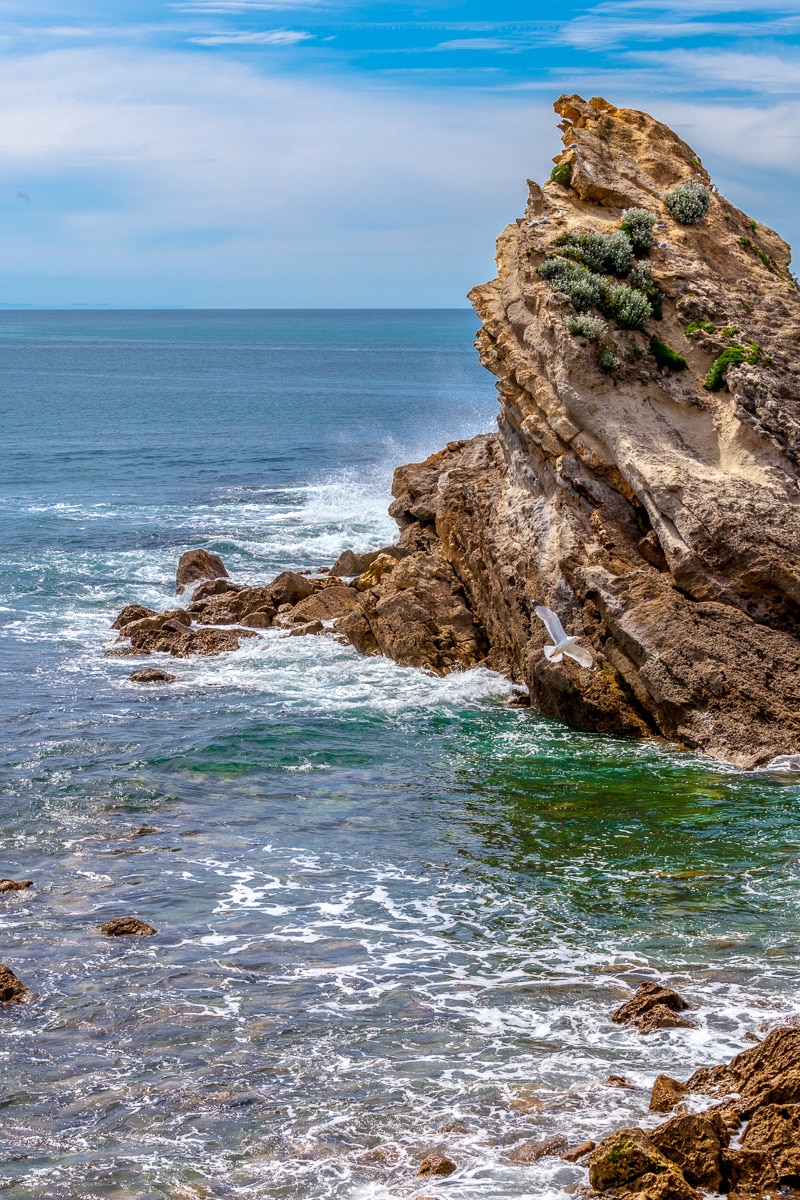 The rocky coastline provided many challenging stairs and long inclines to get up and down to the beaches and back. The slopes and the hills are planted with poplars, tamarinds, hydrangeas, roses and pittosporum (whose fragrant blooms scented the air while we were there).The surfing culture was in distinct contrast to the luxurious seaside tourist accommodations and casinos that date back to the mid-1800’s.

We wandered along the Côte des Basques watching the surfers getting quite descent rides. Then we rounded the rocky point where the 19th Century Villa Belza overlooks the Atlantic. Then we wandered the promenade around the protected Plage (Beach) Port Vieux, a petite wedge of sand filled with early-season sun worshipers. The walk took us then to the Le Rocher de la Vierge or The Rock of the Virgin, which is considered one of the symbols of the city of Biarritz. 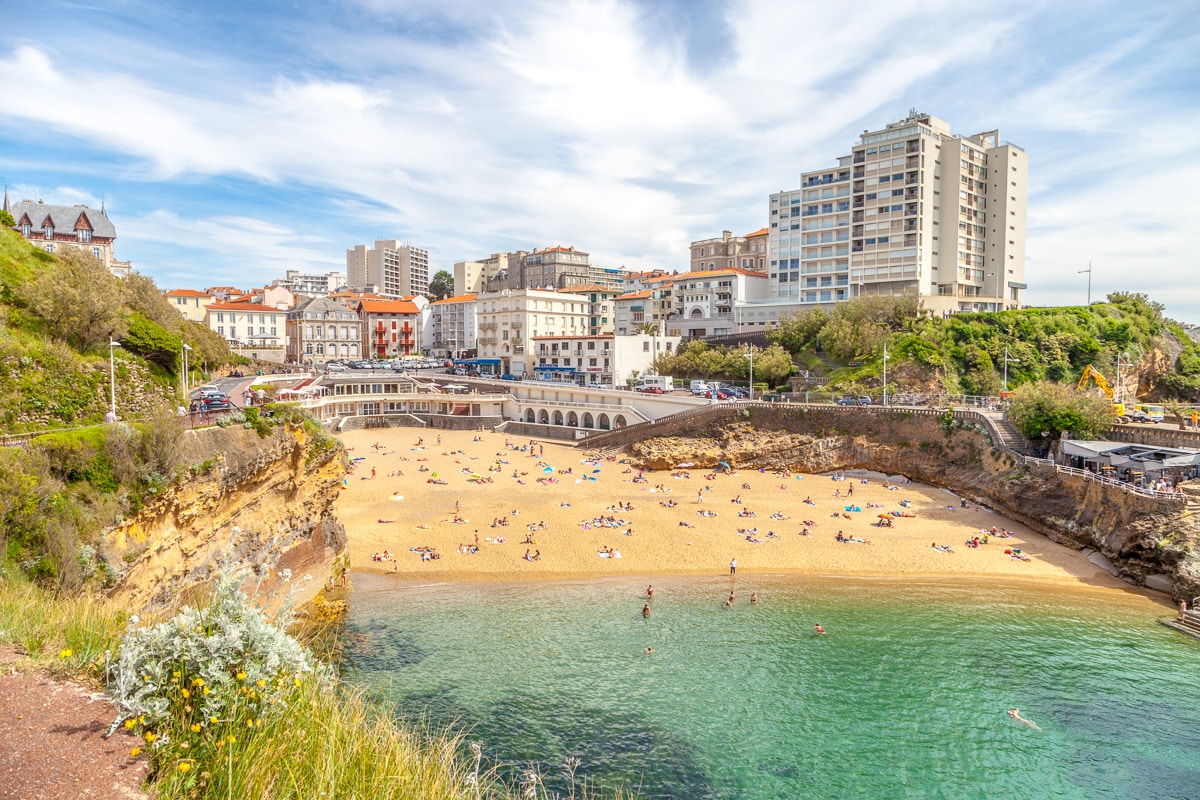 Continuing the path around the rocky point called the Plateau de l’Atalaye (“Atalaye” means “promontory” in Basque) where generations of Biarrots watched the passing of the whales, awaited the return of fishermen, and kept a watch for enemy ships. Sighting none of these we made our way around the Port des Pecheurs and its beach laying beneath the watchful eye of the Notre Dame du Rocher  – Église Sainte-Eugenie. 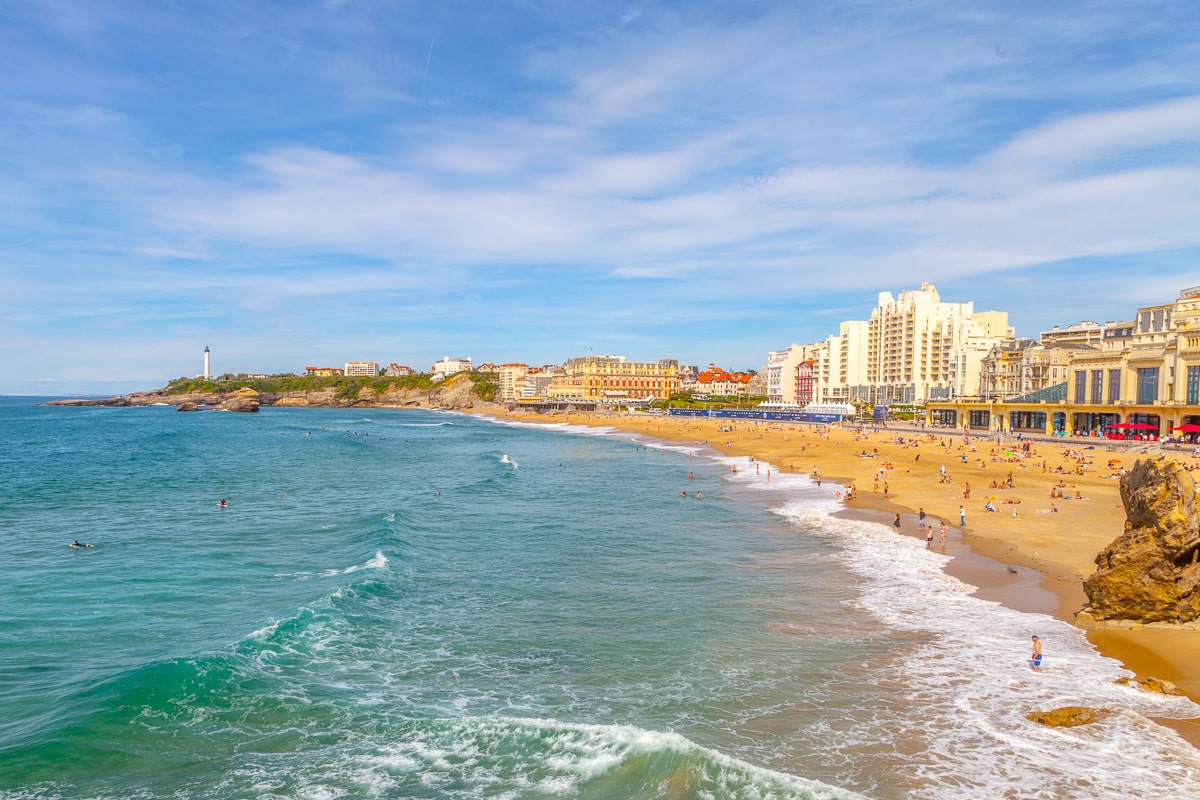 Still further along, we were getting quite warm, and as we reached the Grand Plage and saw all the cafes and bars we knew that it was time for an afternoon beverage. So we stopped beneath the shade of an umbrella along the boardwalk and sat for a while with drinks, watching the sand, sea, and the rest of the world go past. 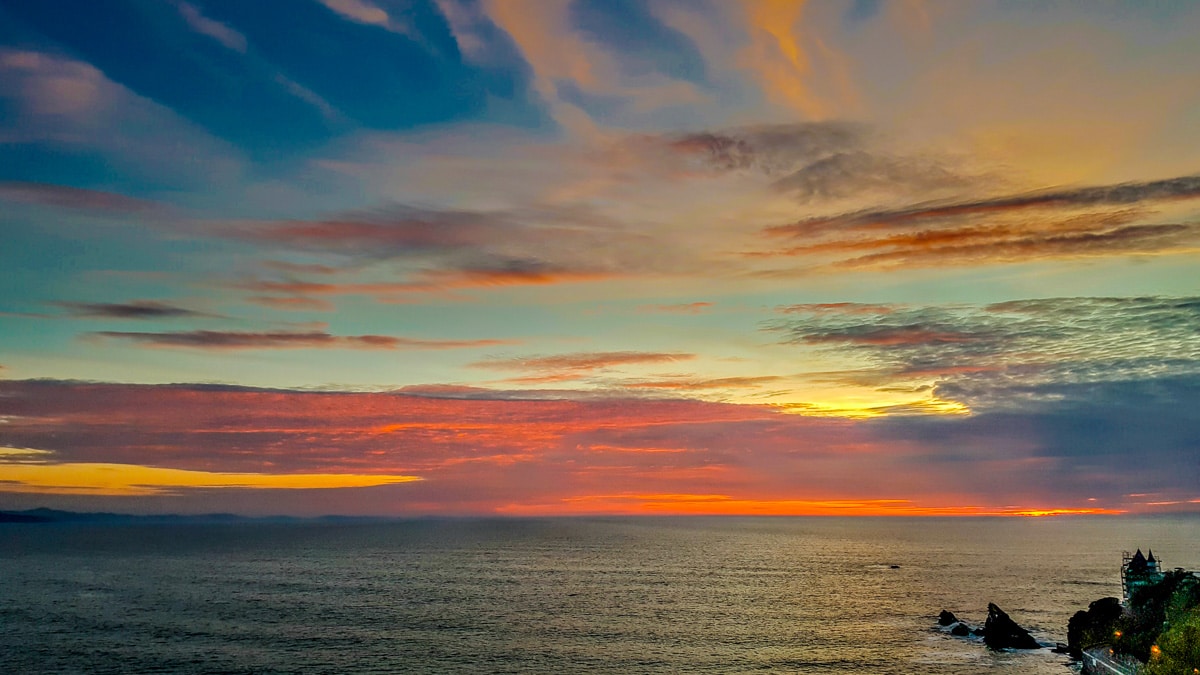 Later that evening we had a delightful Basque-style meal at L’Etable, one of those places hidden down an alley and in a cave-like building that’s so inconspicuous that only a local could point it out to you. Afterward we walked over to the view over the Plage de la Côte des Basques to watch the sun setting on its way over the Atlantic. 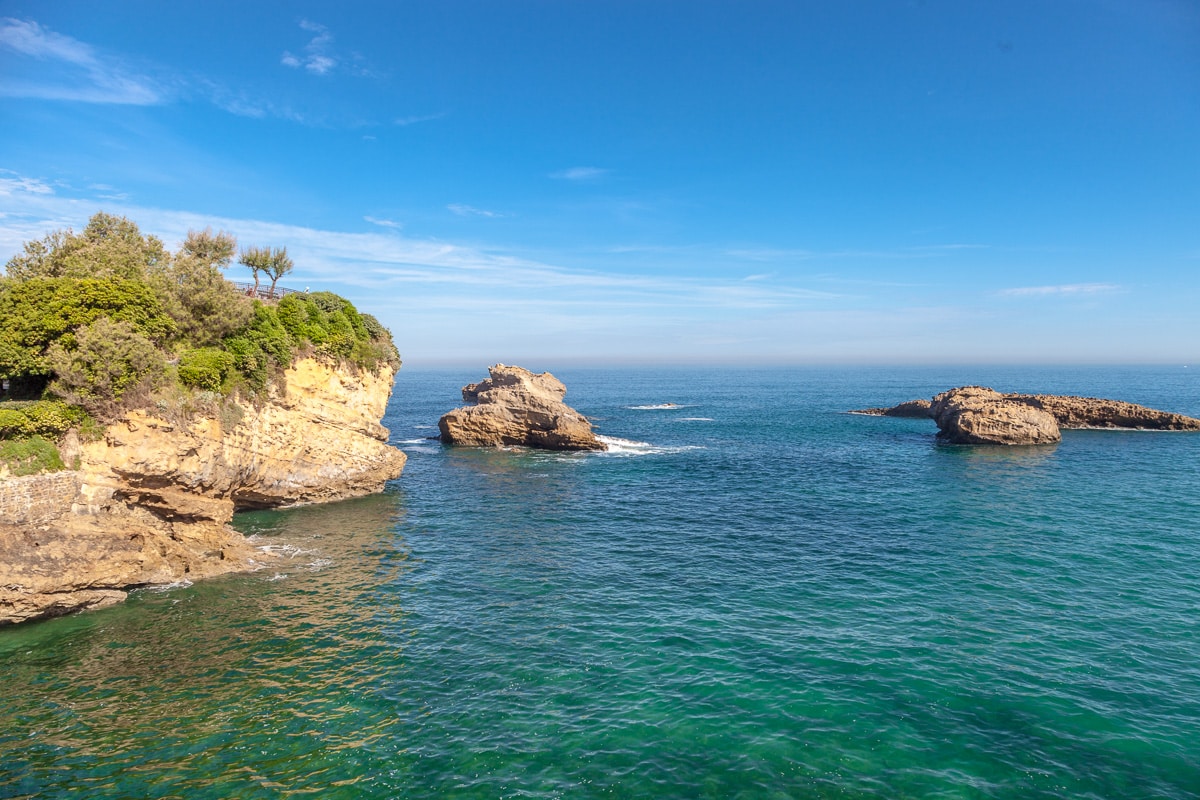 Our second day, began with a typical French petit déjeuner (breakfast) of a grand café crème et Croissant at the cafe in the Le Marché aux Halles de Biarritz (market) and a continued stroll through the quiet town. The beaches were empty, and the sun, which rises early, was already beginning to illuminate the golden sands and the rocks that rise up out of the sea. 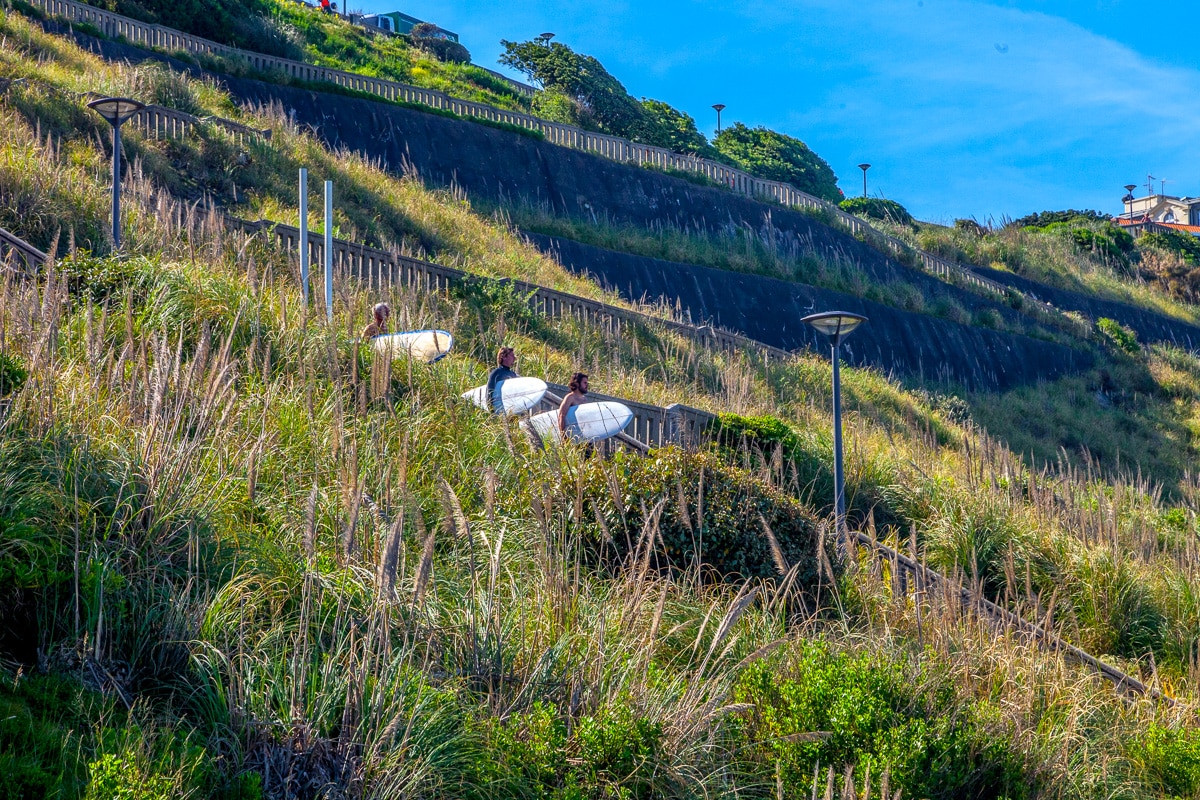 Starting near the Grand Plage, we retraced some of our steps of the previous day. Surfers were making their way down to the beach to have fun with the waves. We on the other hand decided that since we had a car, we should take a drive somewhere. So, returning to l’hôtel St-Julien, the staff made a wonderful recommendation; but it will have to wait until the next post.