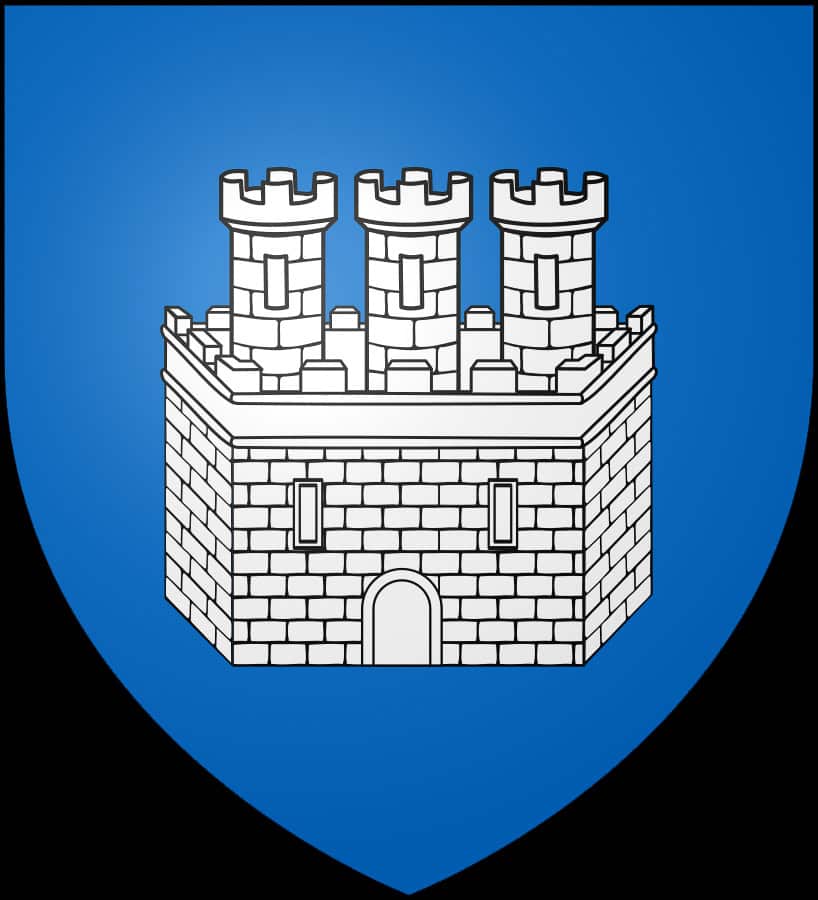 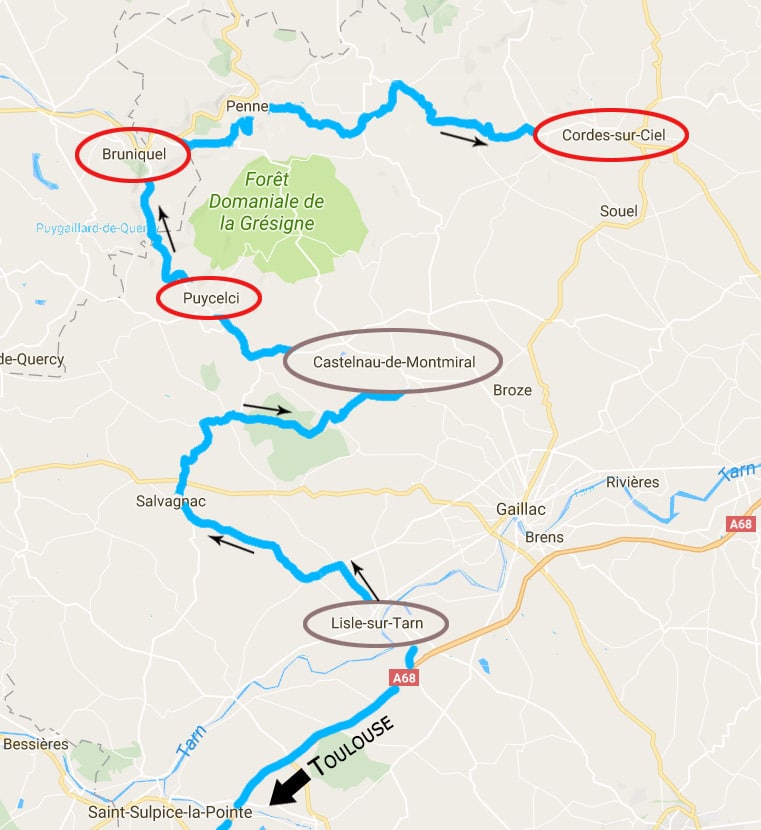 The roads on the way to our next stop, Puycelci* were every bit as lovely or even more so as those we had already been on. The cool air that passed through the car carried the delightful fragrances of wildflowers and occasionally the earthy scents of the pastures that surrounded us. The narrow winding roads were posted with speed limits of 30 to 50 kph (18-30 mph) that encouraged us to appreciate the sounds of the bird songs we could hear as we moved slowly through the forests. We were in no hurry.

As Puycelci came into view, its choice as a defensive location overlooking the Vère River, and the valley of the Tarn river beyond was obvious. Sitting atop a large rocky outcrop, the stone walls and ramparts left no doubt that this was a fortress. 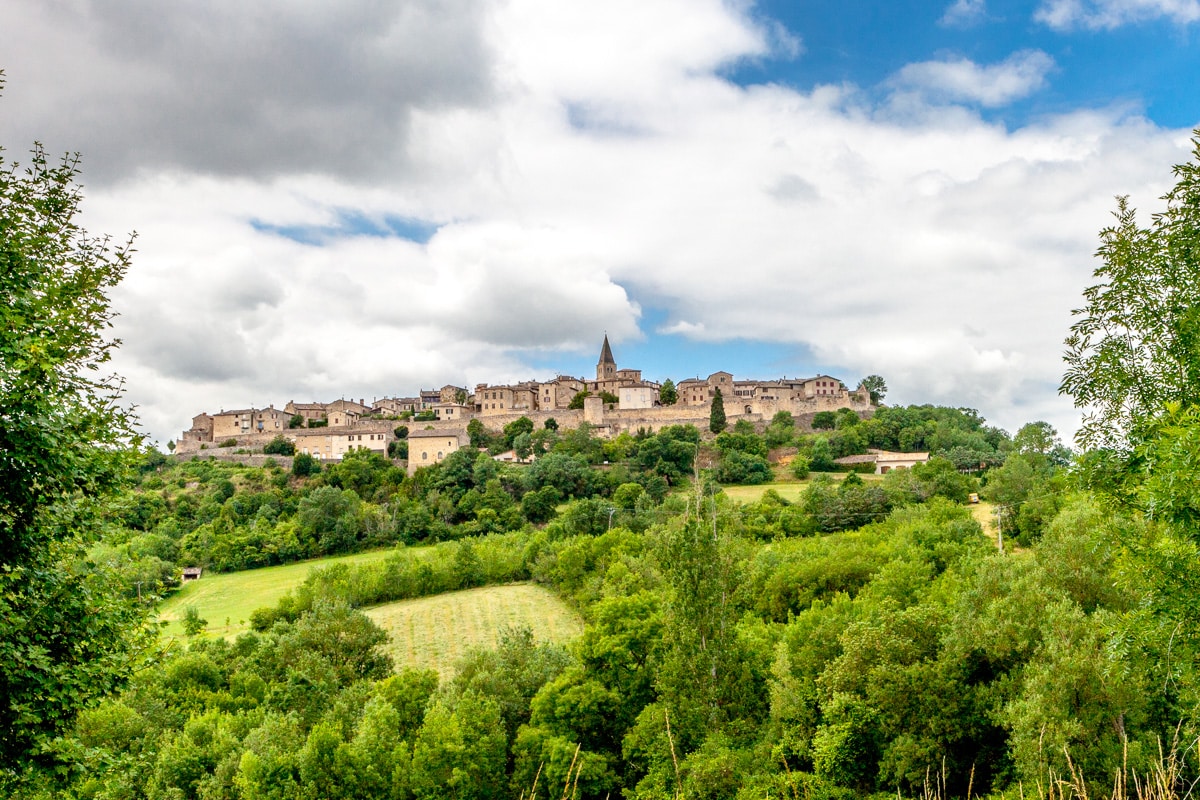 Stopping along the roadside to get a photo of the town from a distance, I was delighted to find myself in the midst of a large number of terrestrial orchids. The inflorescences of Himantoglossum hircinum or the Lizard Orchid were rather tall, and I almost ignored them as I positioned myself to get images of Puycelci. 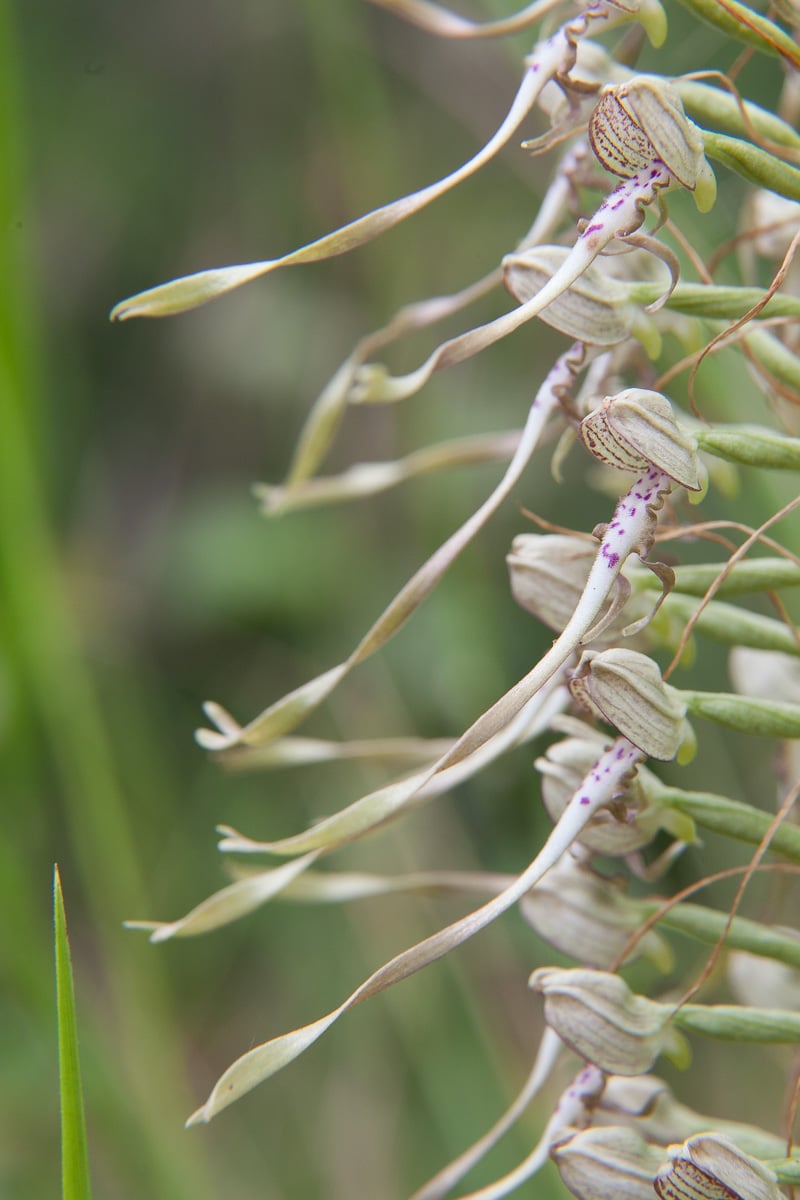 But upon closer inspection, all of my attention was drawn to these beautiful plants.

Usually considered rare, Lizard Orchids can every so often be found in great numbers in suitable habitats, and this was apparently a suitable habitat. The individual flowers were curious with a globular green helmet, and internal striping and dots. The lip or labellum was divided into three parts, two of which were longish, but the third central lobe was about 5cm (2 inches) long and twisted like a creamy/brownish ribbon. Jeannie joined me in admiring these plants, pointing out the best ones for photographs. Then we moved on. 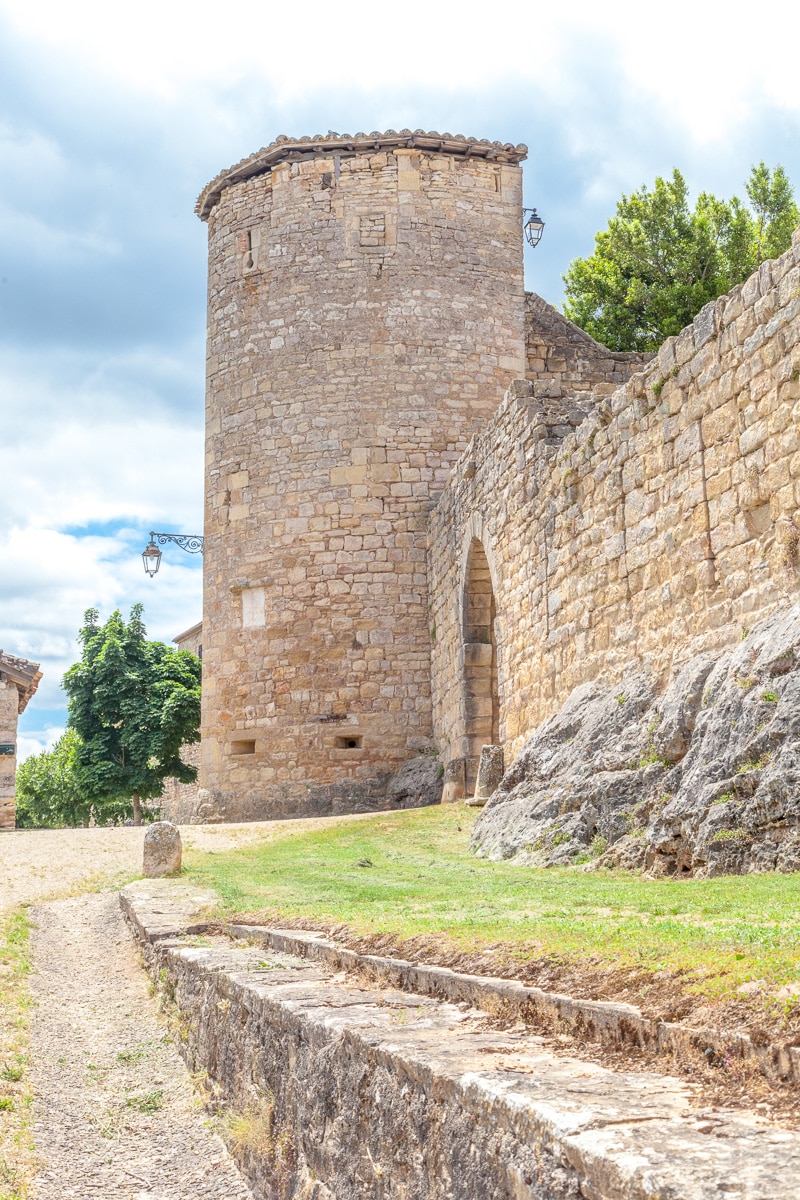 The Tourist Information office of Puycelci, and its adjacent car park was located a short though steep walk outside of the city walls, and as we entered the town through one of the medieval fortified gates, we were glad we had left the car down below.

The narrow, cobblestone streets are lined with half-timber buildings, sometimes filled with wattle and daub and sometimes with patterned tiles; there are stone arches and a number of buildings whose upper story overhangs the lower, typical of medieval construction. 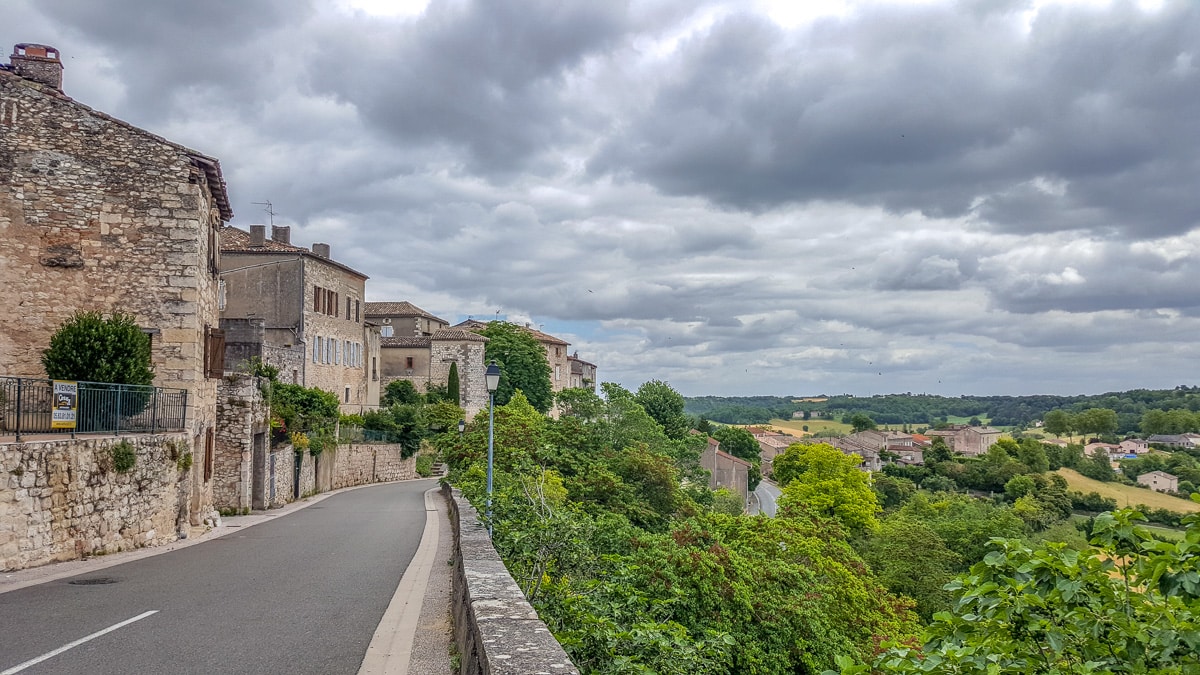 Walking around the ramparts provided views over the surrounding countryside that underscored the strategic nature of the location. In total there are 800m (1/2 mile) of ramparts surrounding the village, with towers, and fortified gates allowing passage through the thick walls. These have survived the crusades, the Hundred Years War and time.

While we wandered admiring the views we had an opportunity to have a conversation with two Australian couples who were also enjoying the town. Shortly though, we had to say good bye to them as well as the town of Puycelci. 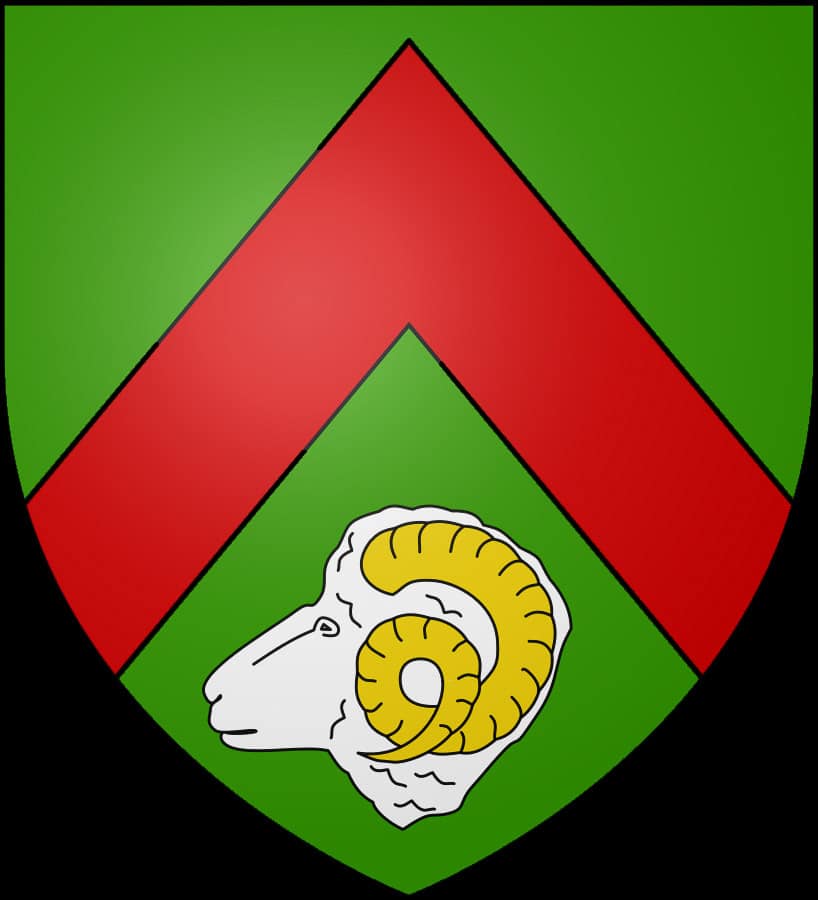 It was another beautiful drive to Bruniquel* following the Vère River to where it joins the Aveyron River. It is here that this town was built on a high rock outcrop that overlooks the valleys in several directions.

The small village of Bruniquel has managed to preserve the Château de Bruniquel, its two castles and their ramparts in a remarkable location surrounded by stone-built or half-timbered houses, turrets, arched doors, and flower-bedecked streets. 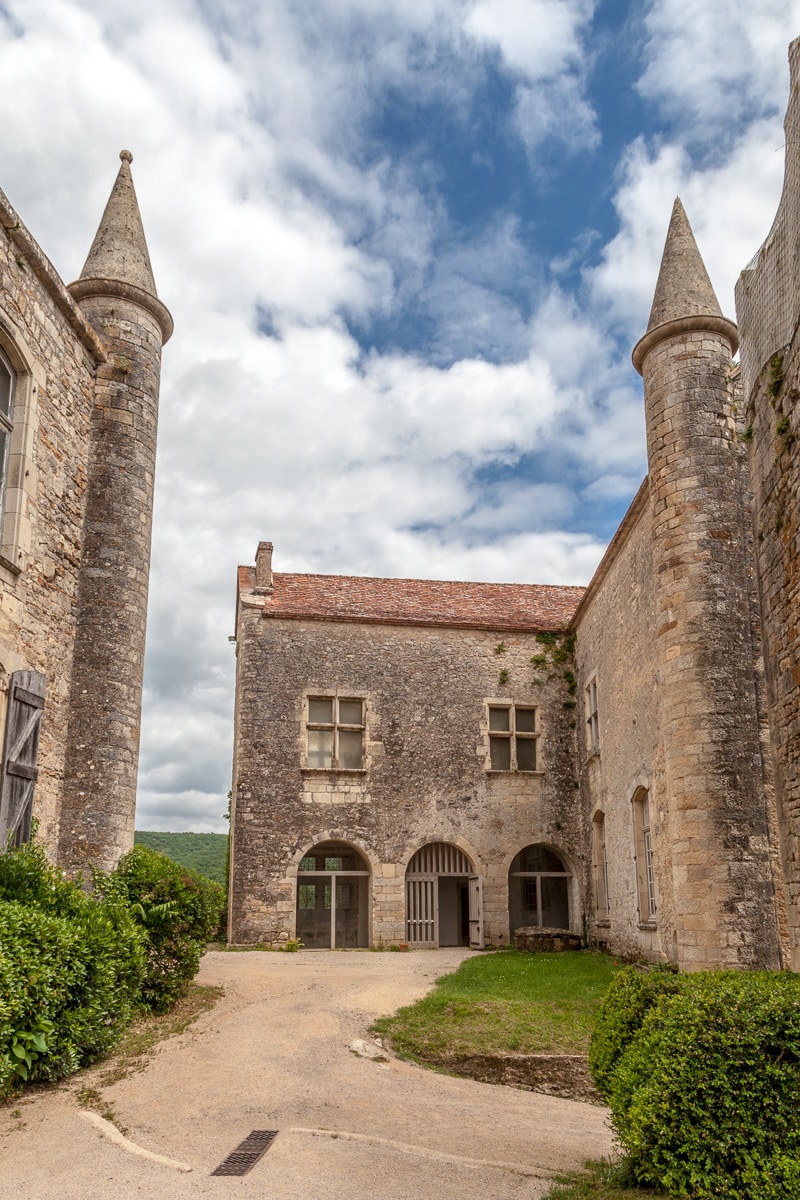 The castles are slowly being restored (since 1987), and are open to the public (with an admission fee). There are many parts that appear as they were centuries ago, but with dust, cobwebs, and crumbling plaster. Yet, these things lend themselves to the timelessness of the ancient structures. In some ways it is like a multi-room, multi-level tomb. There is a fascinating eeriness here that makes you want to explore further. 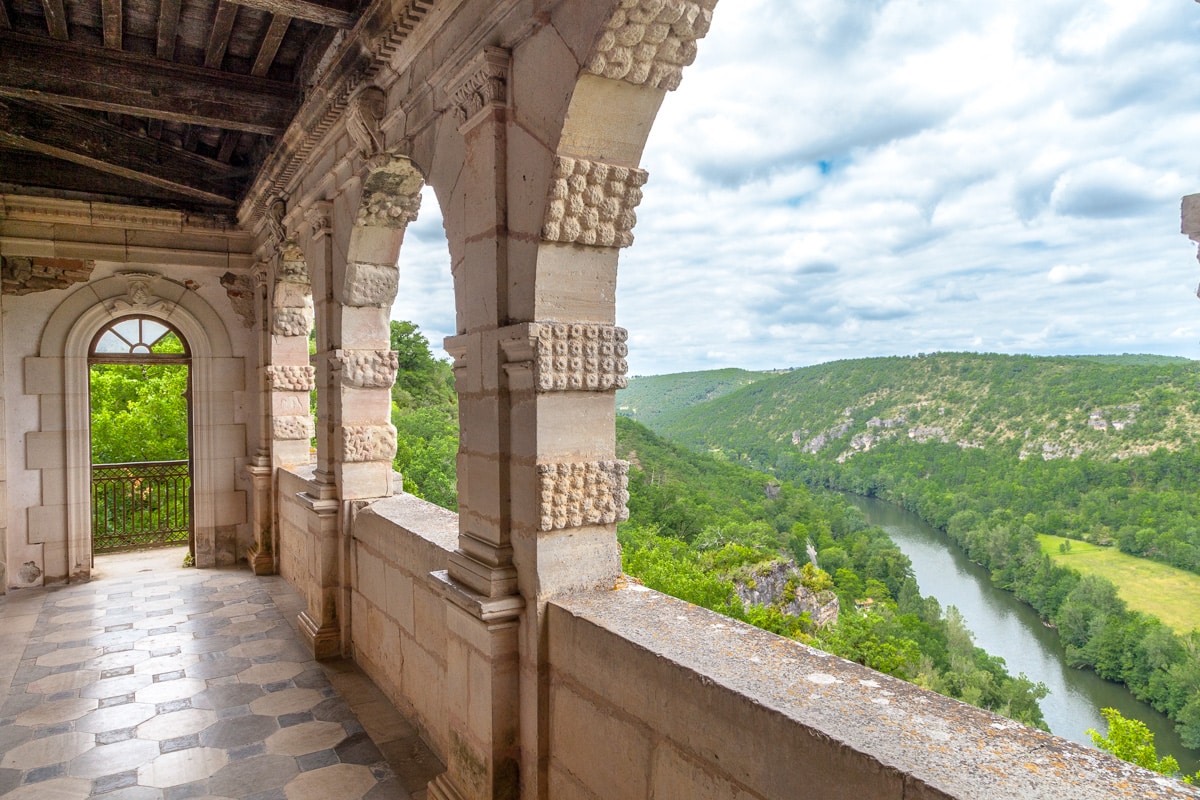 One of the more spectacular view was from a renaissance-style gallery overlooking the countryside 90m (300ft) above the river Aveyron. 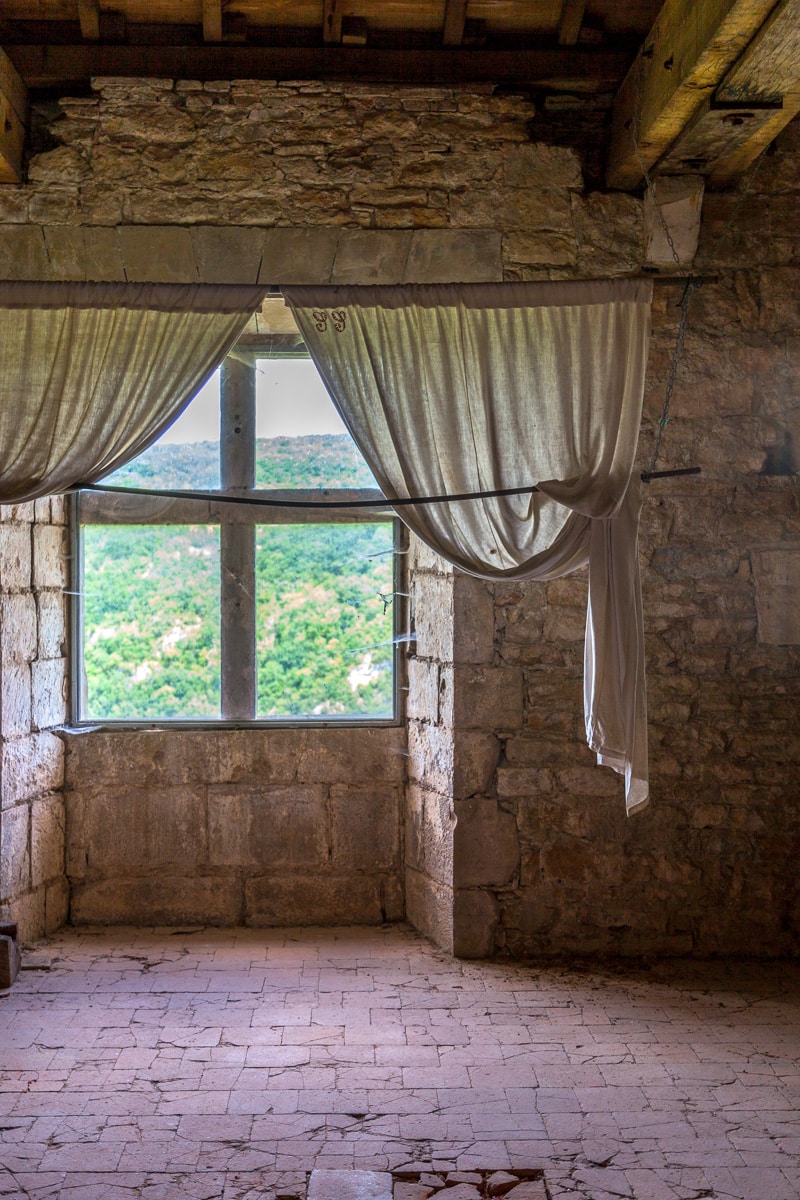 The castles are also home to some permanent and temporary exhibitions. One room is devoted to the Cave of Bruniquel, where some of the contents have been attributed to early human (Neanderthal) activity dated to around 176 thousand years ago. Other exhibits feature fossils and artifacts related to stone work, and finally one room contains some remains found in nearby prehistoric rock shelters.

We enjoyed wandering through both the old and young castles as well as parts of the surrounding village, but we needed to get back on the road. So after a brief ice cream break, we continued on to Cordes-sur-Ciel which was only about 36k (22mi) away but would take close to an hour. But we were in no hurry.

* One of “Les Plus Beaux Villages de France” or The Most Beautiful Villages of France.