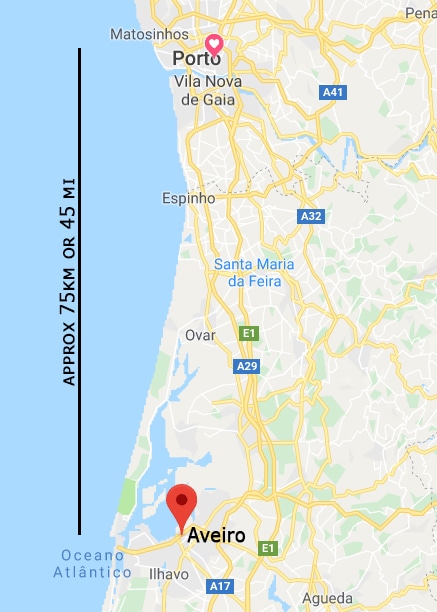 On the shore of a vast, coastal lagoon, Aveiro (uh-vey-roo) is a historically maritime city and a prosperous town with a delightful city center known for its Art Nouveau architecture. It also enjoys a youthful, energetic buzz, thanks to the highly regarded University of Aveiro and its 15,000 students.

Its name derives from the Latin Alavário, which translates to “the gathering place of birds”, referring to the large lagoon nearby where birds congregate in great quantities. 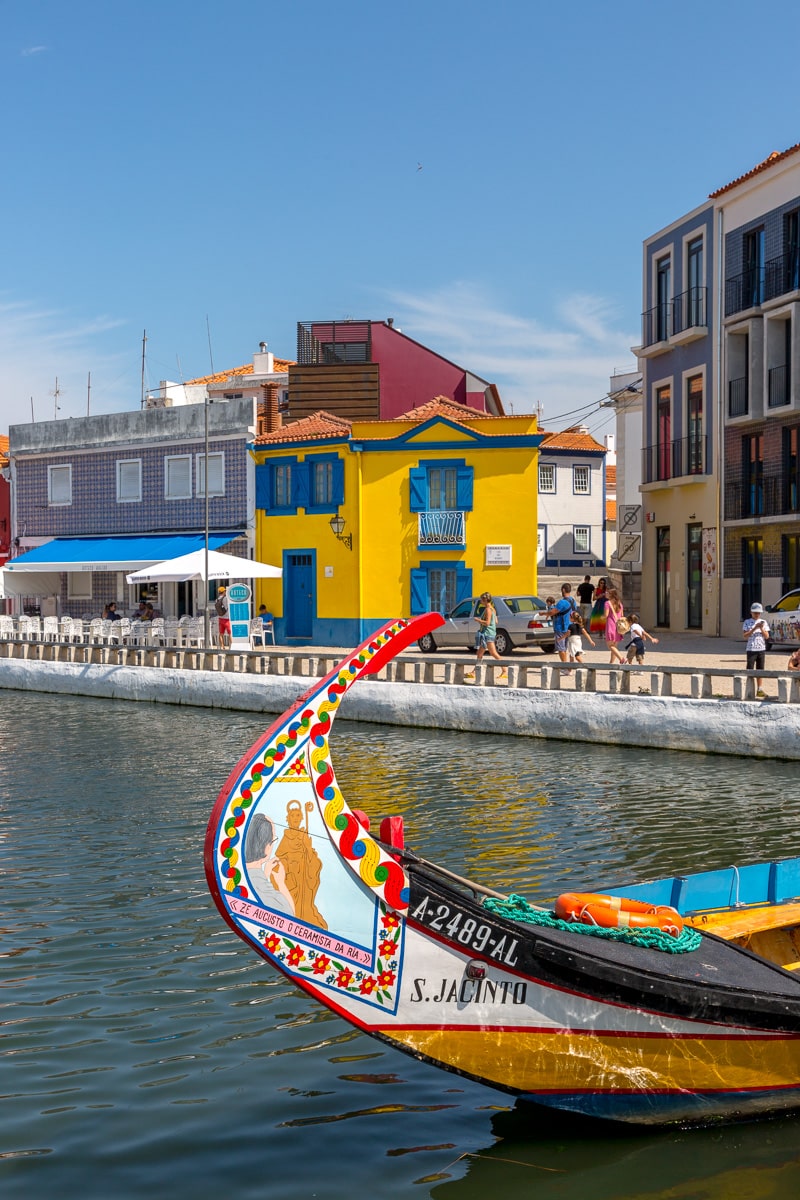 Often called the Venice of Portugal thanks to its small network of picturesque canals, Aveiro has barcos moliceiros instead of gondolas. These traditional, colorfully decorated work boats were originally used for seaweed-harvesting, which was the main source of fertilizer for the farmlands around Aveiro, but now only transport tourists on canal cruises.

Salt production has always played a major role in the economy of Aveiro. It was a center of salt harvesting by the Romans and trade since 959. Later, in 711 the Moors invaded the Iberian Peninsula and occupied it until the 11th century, after which it became a very popular city among Portuguese royalty. Today, salt production that used to be a thriving economic activity, has pretty much ended, and now only a few salt ponds remain, mostly for tourism.

Though of small economic impact, the city is also rather famous for the local, sweet, delicacy made with eggs and sugar – the “ovos moles” (soft eggs). 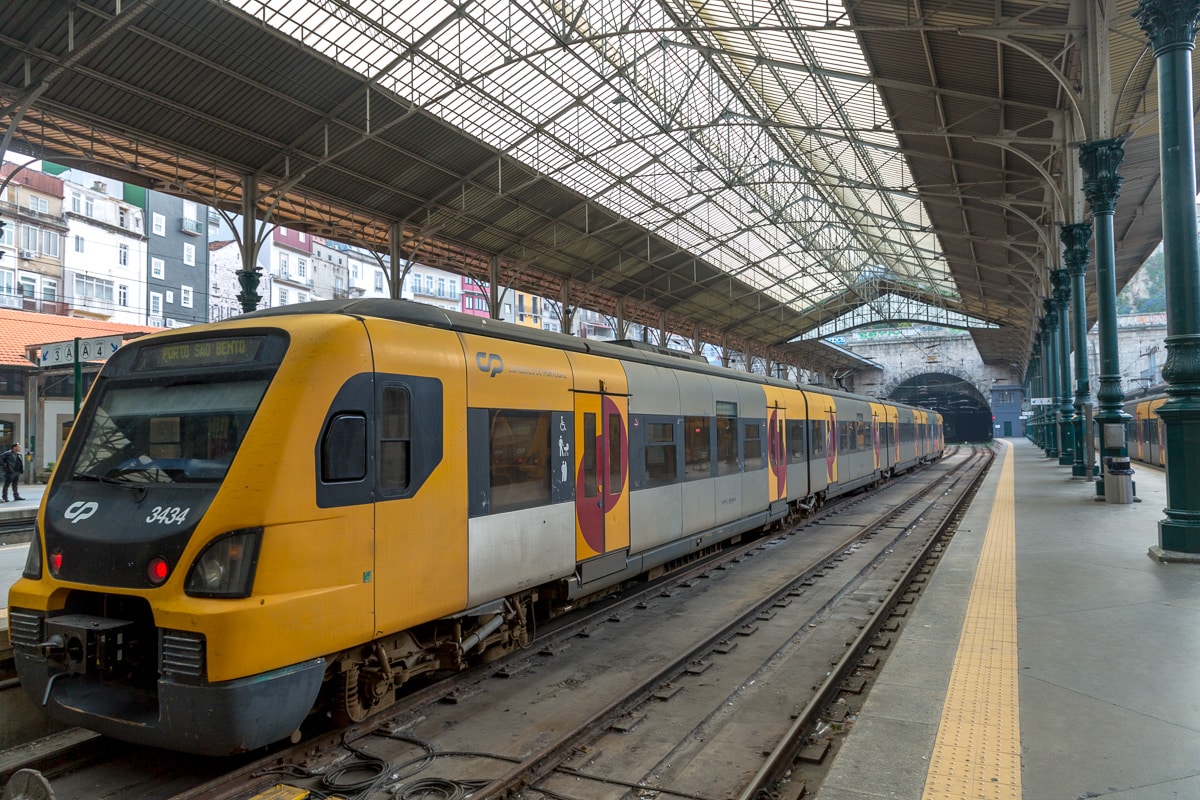 So, on the day of this adventure, we left extra early for the Estação de São Bento, and Porto was still very quiet. There was plenty of time to wait before our train arrived, so Chris wandered for more photos while Jeannie sat on a bench on the platform. A cleaner with his broom and cart came by to sweep the rice that was around the bench. Perhaps a wedding last night? A women also on the bench spoke with him, and after he left Jeannie wanted to try some conversation with her. Soon they were chatting with a little bit of understanding.

Before we boarded the train, the woman communicated that the train would reverse course at Estação de Porto Campanhã, the first stop, so we should get backward-facing seats so once we turned, we would face the direction of travel and have better views. At least that is what we thought we understood. And indeed,  we understood correctly, so we had good views on our way to Aveiro! 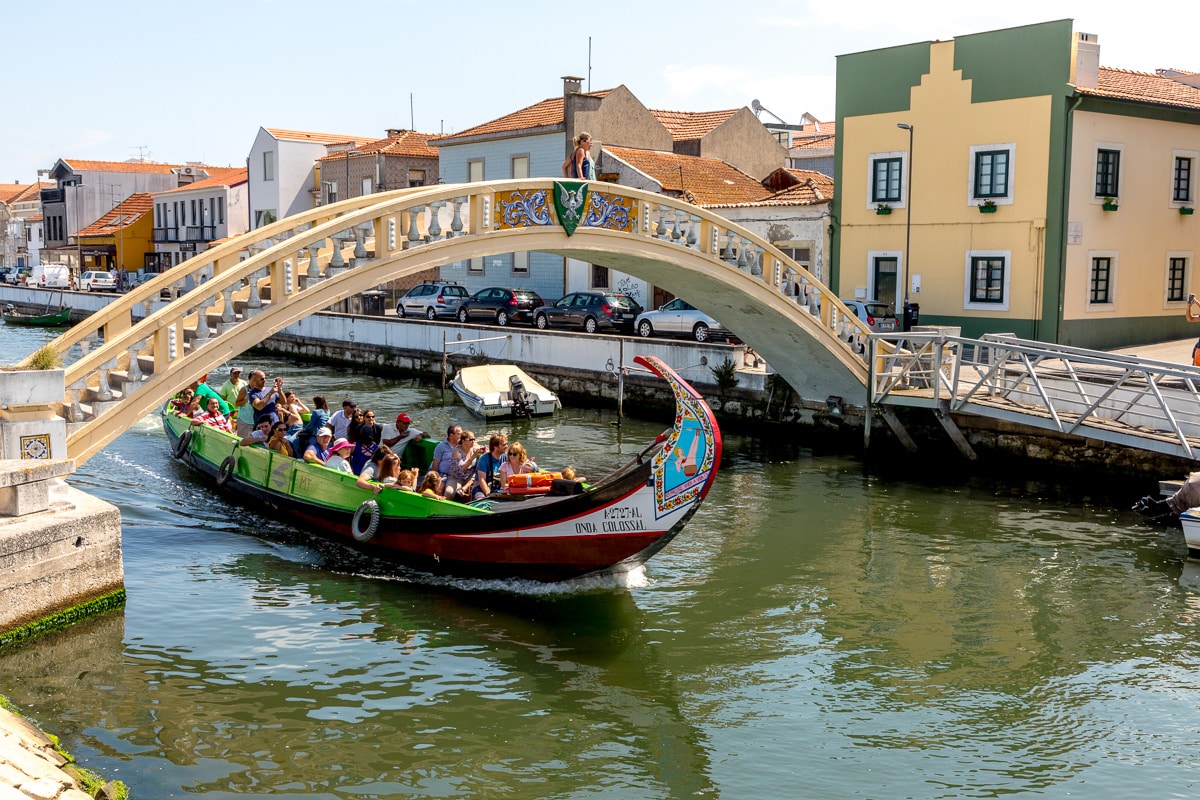 After arriving at the Estação de Aveiro, we walked down the main street of town, and on a whim, decided to take a tour on one of the Barcos moliceiros, the colorful boats of Aveiro traditionally used for seaweed-harvesting, and are now used for transporting tourists.

After the boat tour, we wandered, wandered, and wandered some more through this charming village, until it was time to find a place for lunch. 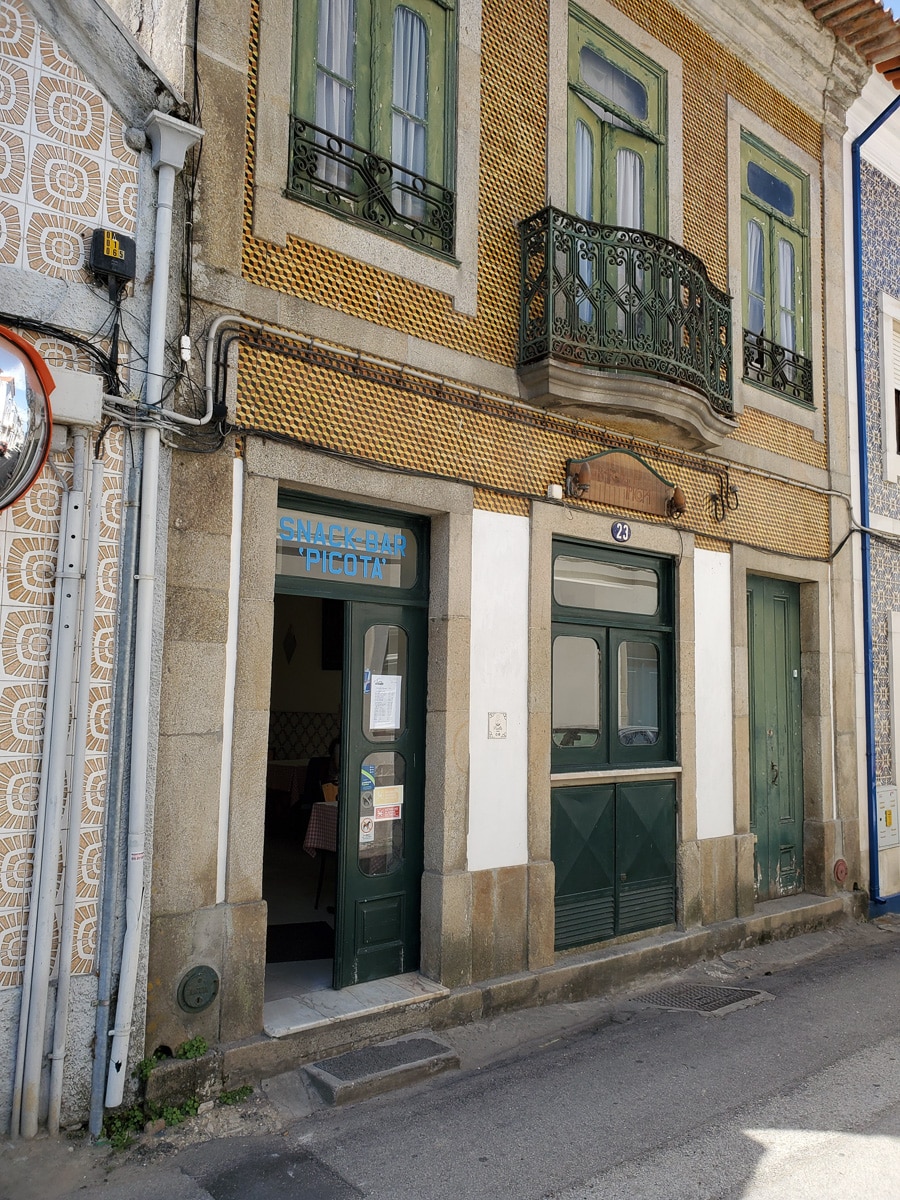 We decided, as we often do, that we did NOT want to eat at any of the touristic places, so as we roamed the side roads we looked for a place that spoke to us. We passed Snak-Bar Picota, making note of its non-descript exterior and the list of pratos do dia, walked a bit further and looped back. It just looked like what we wanted, and it was! Small and family-run, we took a table and the young waiter came by.

We spoke a bit of our best mumbled Portuguese and he quickly offered good English in return. We had some discussion with him about the fish options and he recommended the sea bass and he could advise how to eat it since it would not be deboned. Chris ordered soup to start and it was fabulous, cabbage, kale, potato, mostly broth, so good. We also decided on a full bottle of white wine (4 € for a bottle and it was very good!), and a basket of bread. 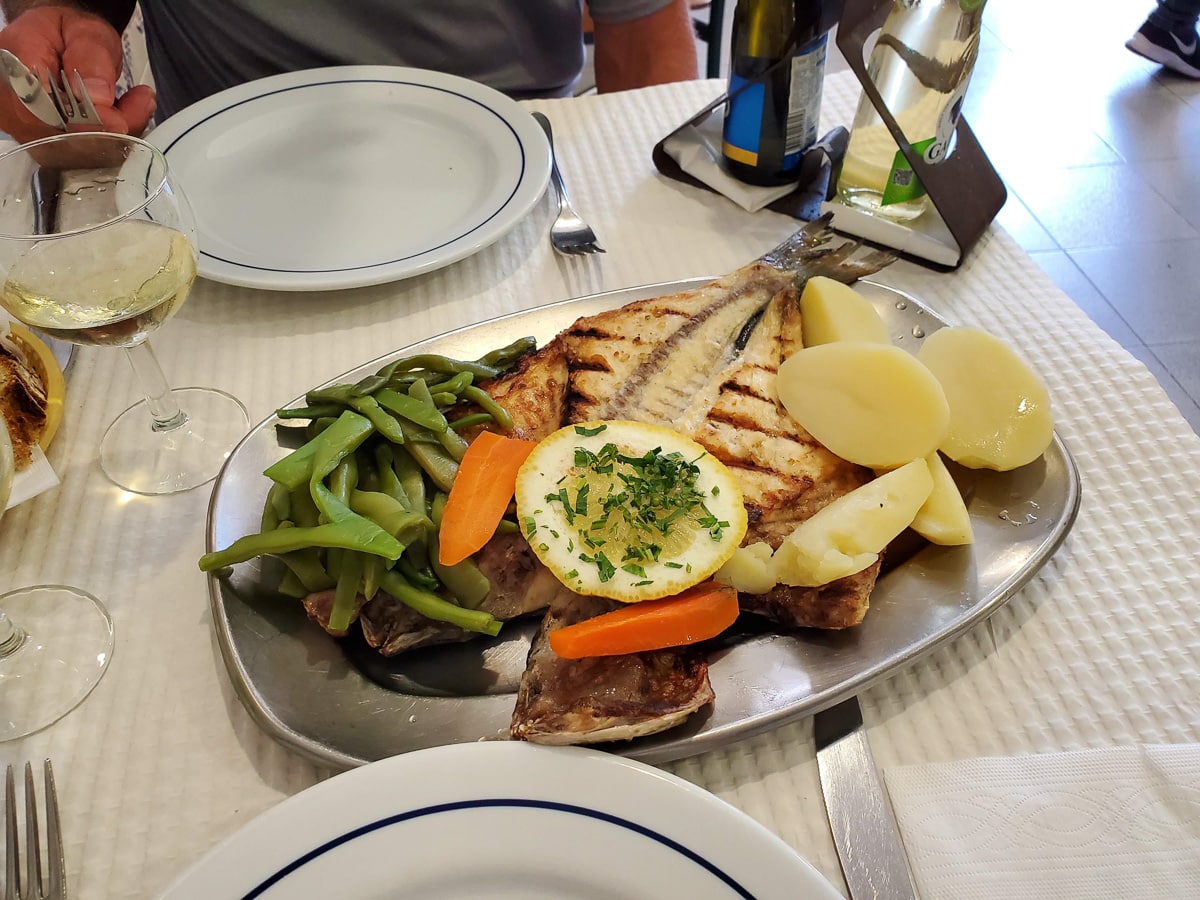 We could hear the sizzling of the grill and soon a platter of the fish, potatoes, carrots, and beans (yay, veggies!) appeared. The waiter showed us where the main bones were – the whole fish had been splayed in half for the grill. We navigated well, and only encountered a few bones once we were eating. But oh, the taste – the grilled flavor, salty, smoky, and such a sweet meat. We tried to eat slowly, but it was so good, and more wine to enjoy. The waiter came by a couple of times to see if we were doing ok, needed anything, or had any questions…  “Não, obrigado, está tudo delicioso.”

Soon the platter was empty except for bones. We didn’t finish the wine, but did order coffee (espresso, of course). It was a truly fabulous meal, and as we departed we thanked, in our best Portuguese, dad who was at the grill, and mom who was back in her kitchen, and of course the son who was our waiter. 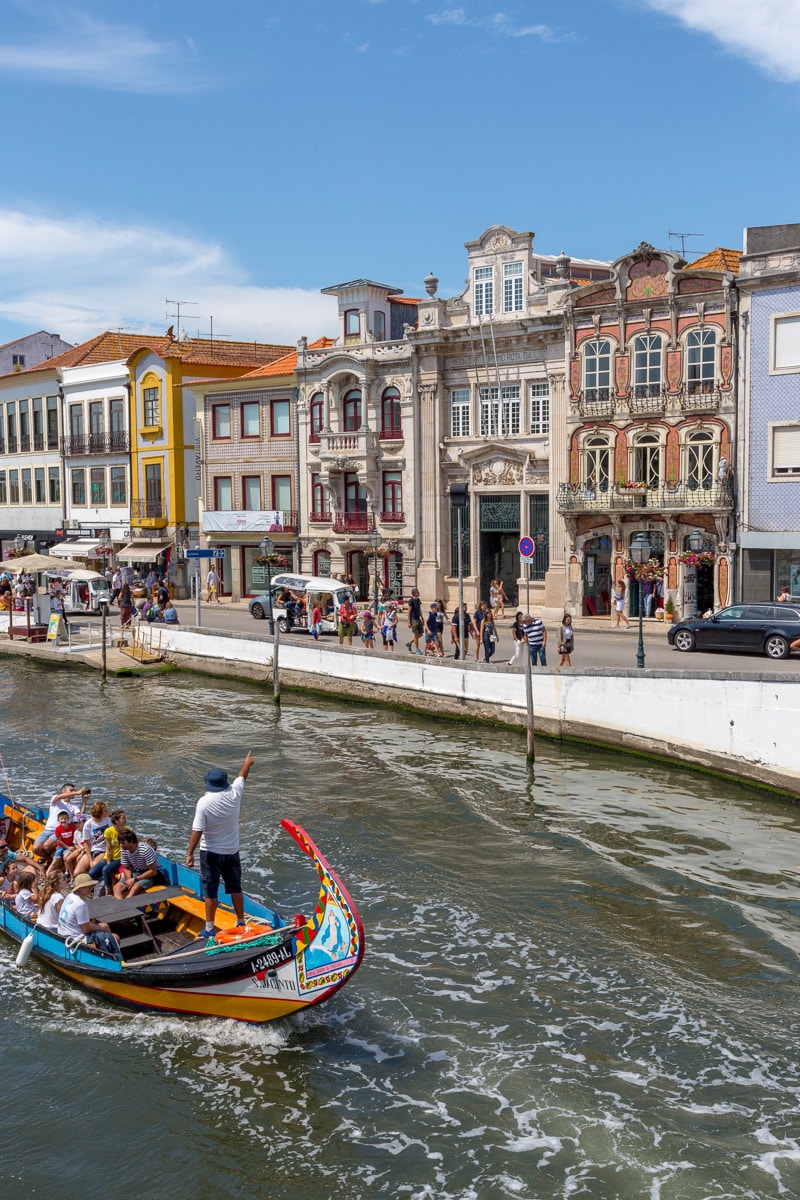 After lunch we strolled further afield, and found a bench under some palm trees near a salt marsh. It reminded us both of places along the coast on the other side of the Atlantic.

Walking back to the Canal Central da Ria, we decided to locate the Arte Nova (Art Nouveau) Museu. First stopping in the Museu Cidade de Aveiro (City Museum), we were told that both it and the Museu Arte Nova were free for those over 65! Both museums were well done and very interesting. 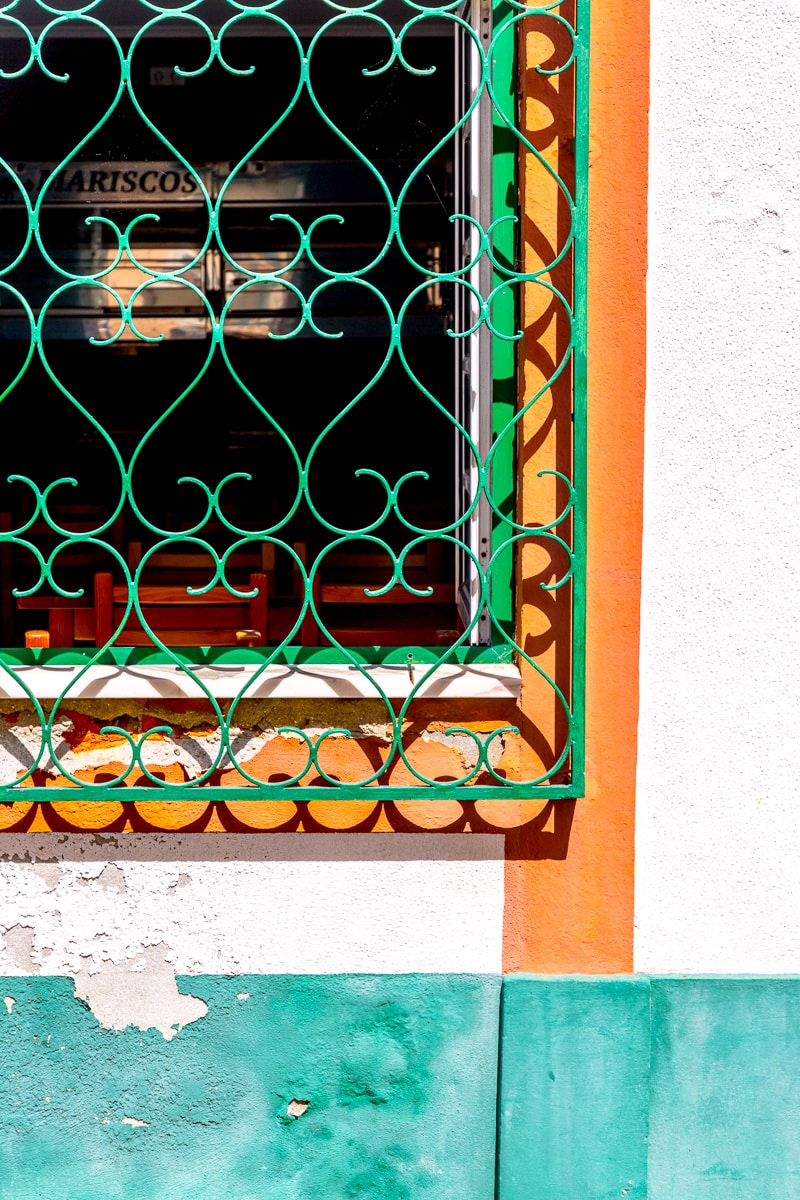 As it was a very warm day, when we left the Arte Nova Museu, we observed many people walking past eating ice cream. We hadn’t had sobremesa (dessert) after lunch, and some gelado sounded wonderful – and it was.

We wandered the back streets some more as we meandered our way back towards the train station, stopping to pick up a couple of the local treat – ovos moles. The train arrived about 15 minutes after we got to the station, and we managed to get on and get seats. More and more people after us, and soon there were lots of people standing – so glad it wasn’t us!

The return to Porto was relatively quick, and on the walk back home from the station we stopped at the supermercado, for some provisions to make a simple salad for dinner.