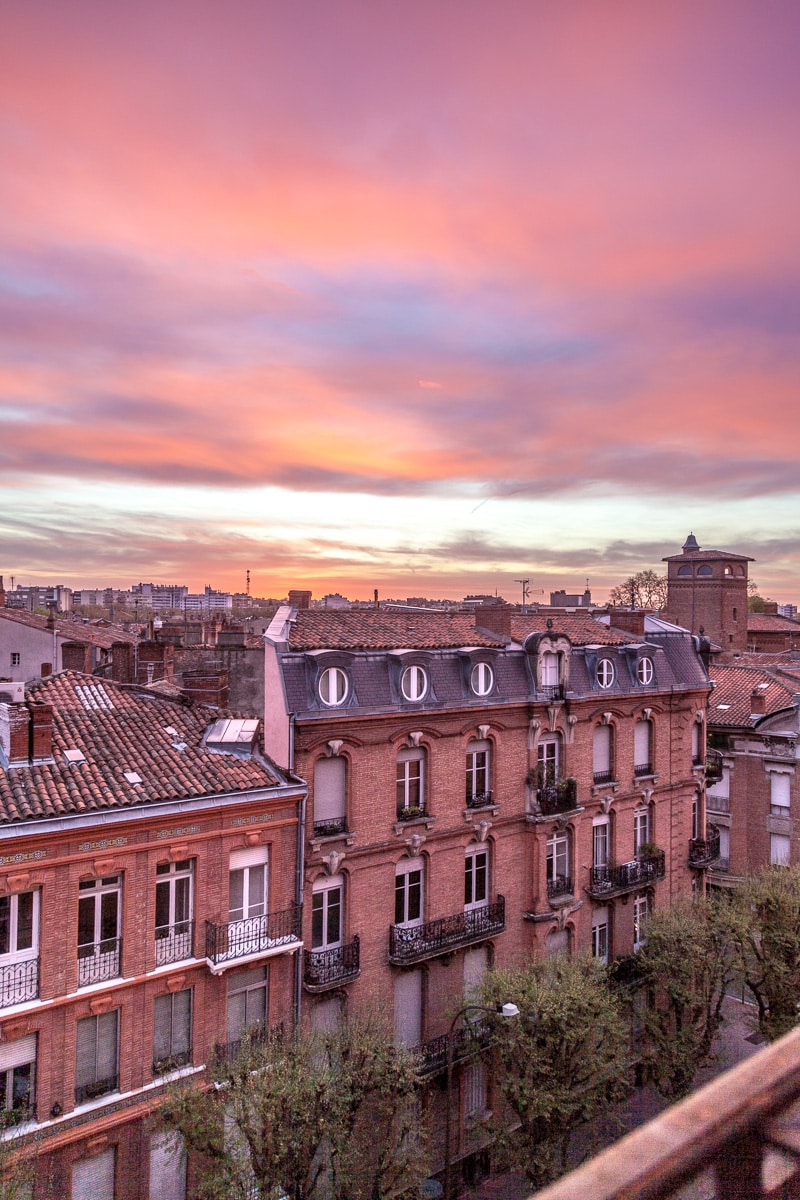 Our mornings begin with the sun streaming into our small apartment, waking us shortly after sunrise. The sounds of the street begin filtering up, and the songbirds, pigeons, and seagulls begin their morning rounds on the roofs and treetops below our windows.

The mornings have been crisply cool, requiring a jacket or sweater and a scarf. Once we get out we make decisions on which side of the street to walk down based on the location of the sun. In the mornings we may cross the winding streets several times to remain in the warmth as much as possible. By the afternoon, we reverse the concept keeping to the shade to avoid the intense sunlight, despite the fact that the air temperature is still comfortably cool. 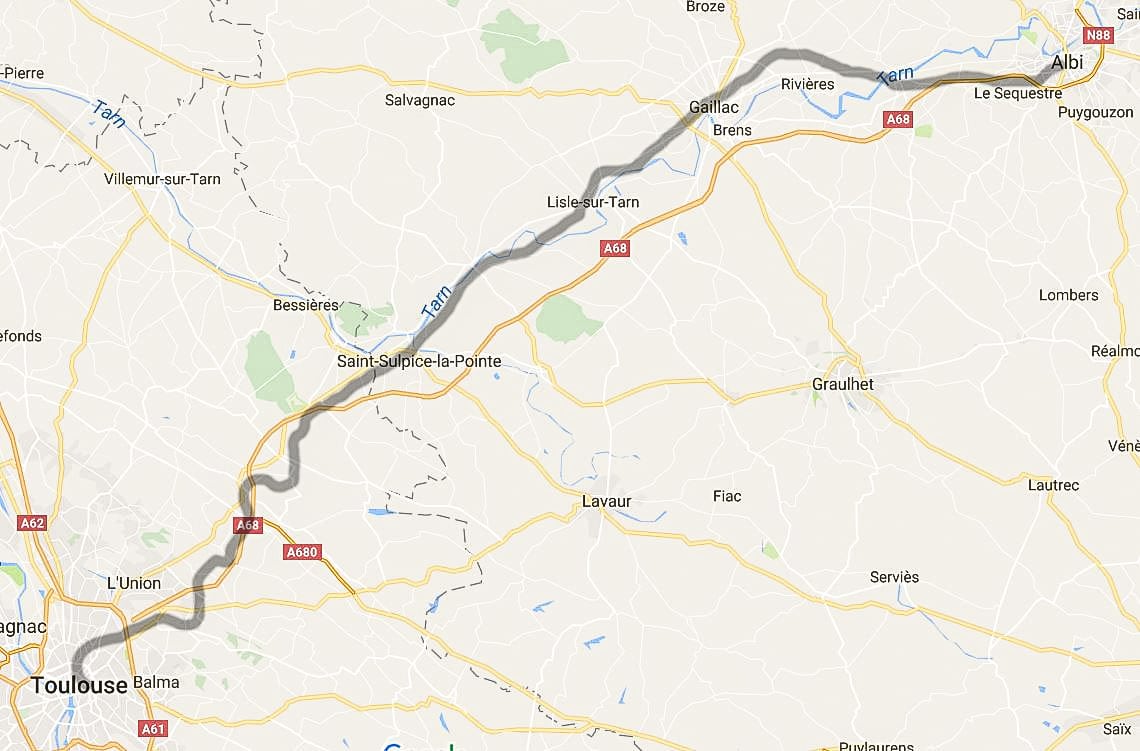 This morning we had to set the alarm to ensure that we got up early for our first journey out of Toulouse since we arrived. We had purchased our train tickets the previous day to go to Albi on the 07h27, so we needed to allow enough time for the 30-minute walk to the Gare de Toulouse Matabiau (train station in Toulouse), figure out which platform to go to, and get a Café crème and a croissant aux amandes for petit déjeuner (breakfast). 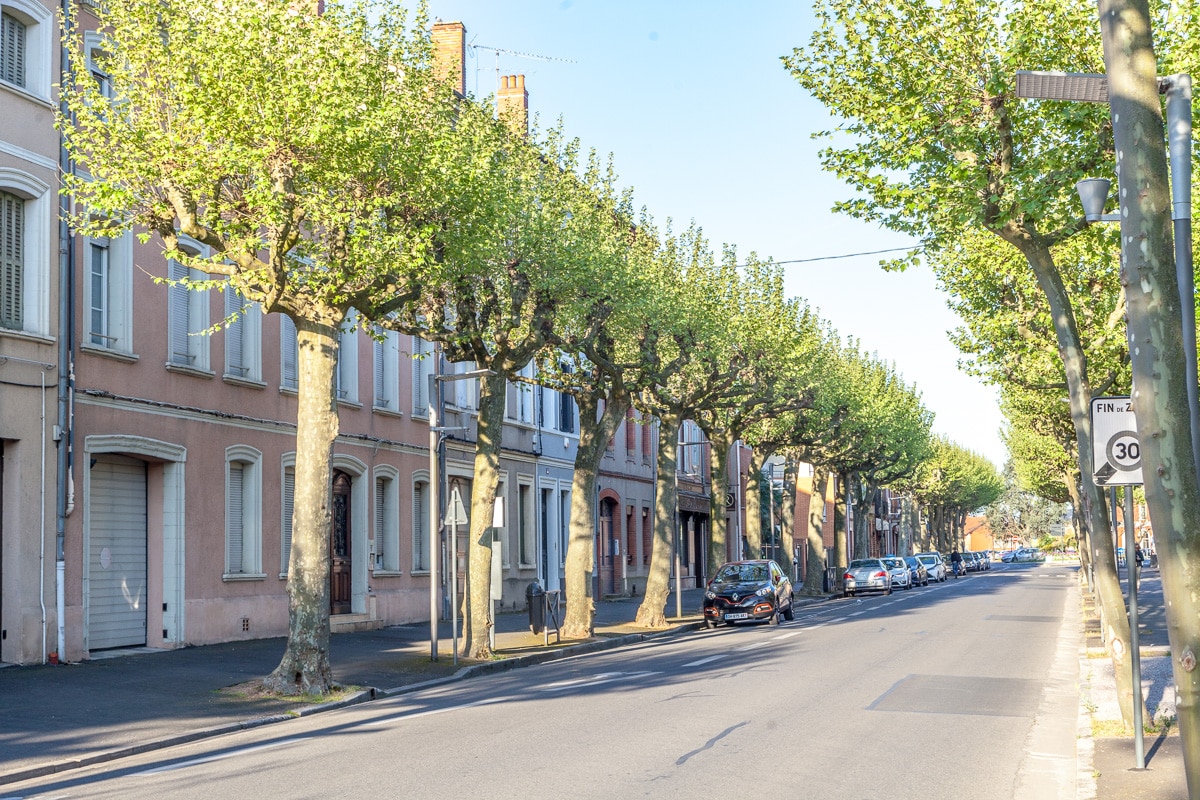 Everything was ready to go the night before, so we departed before the sun was up, though the eastern sky was rimmed with the purples and oranges of dawn. The empty streets and sidewalks were in stark contrast to the bustling flow of pedestrians, bikes, buses, and cars that would emerge before long.

The train departed on time as we settled in for the hour-long ride through the French countryside. The morning light illuminated the farmland, forests, and small villages as we passed through. 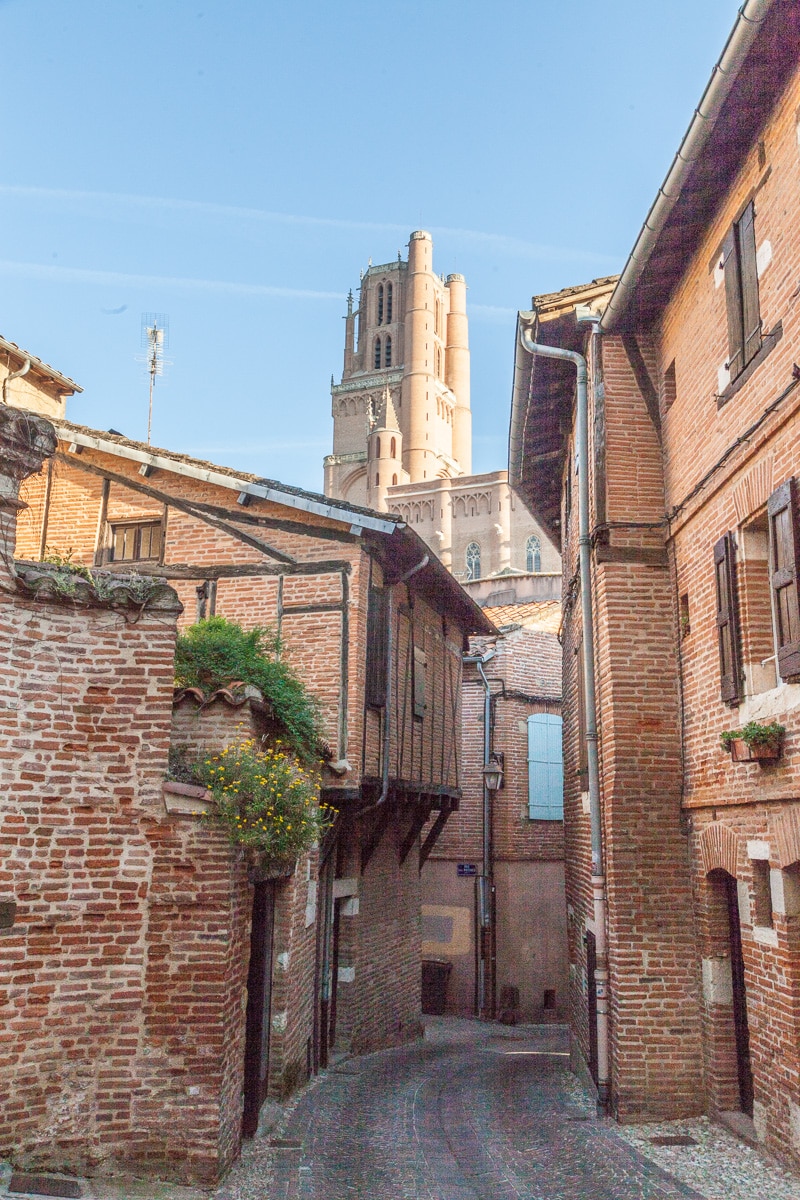 Albi was still waking up as we walked the half-mile or so into town. The narrow medieval lanes and alleys were still in deep shadows and the shops were closed as we passed quietly by. Along our route we caught glimpses of the Cathédrale Sainte-Cécile rising majestically into the brightening sky.

The Cathédrale Sainte-Cécile was begun in 1282 and was under construction for 200 years. The massive church became a UNESCO World Heritage Site in 2010, and is claimed to be the largest brick building in the world. Indeed it is incredibly huge, and rather austere … on the outside. 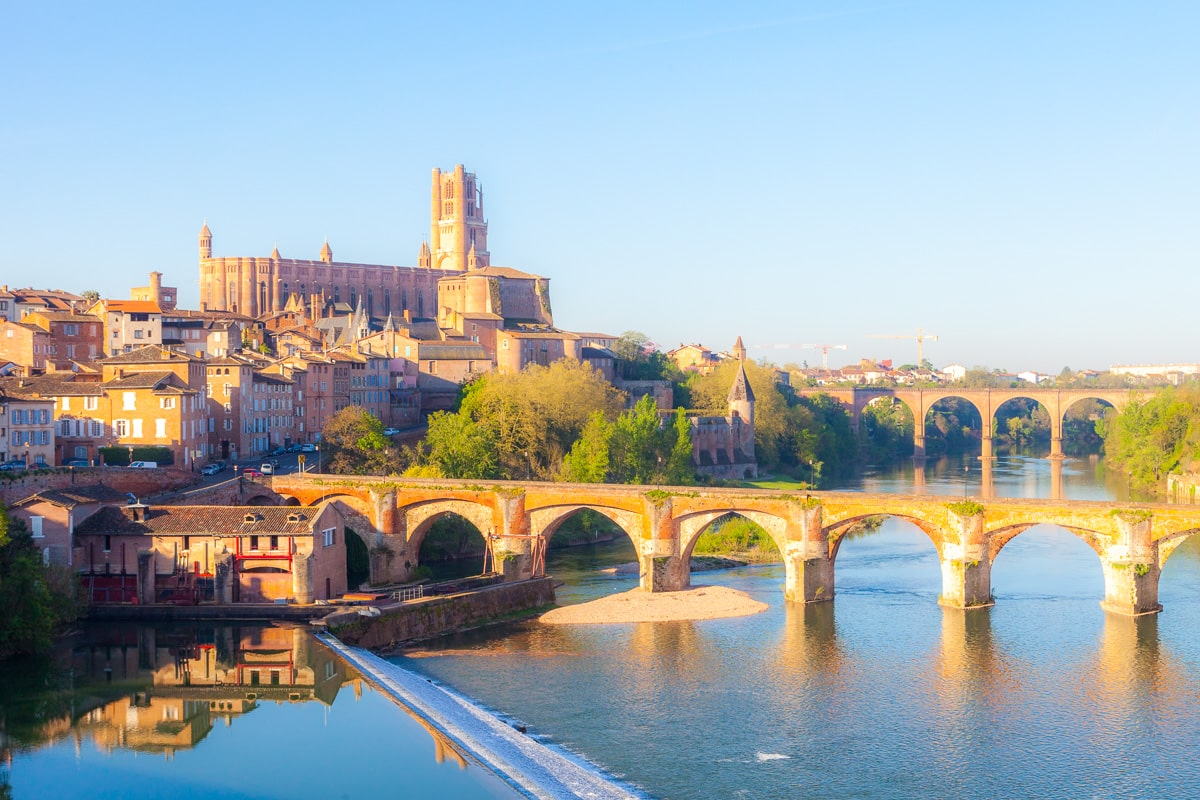 As it was still early, we decided to wander the town before the throngs of townsfolk and tourists filled the streets. Besides the morning light would provide the best opportunities for photography. Along the way we crossed over the Tarn River and had an outstanding view of the massive Cathédrale, as well as the Palais de la Berbie (Berbie Palace) that now houses the Henri Toulouse-Lautrec Museum, as well as the old city of Albi. 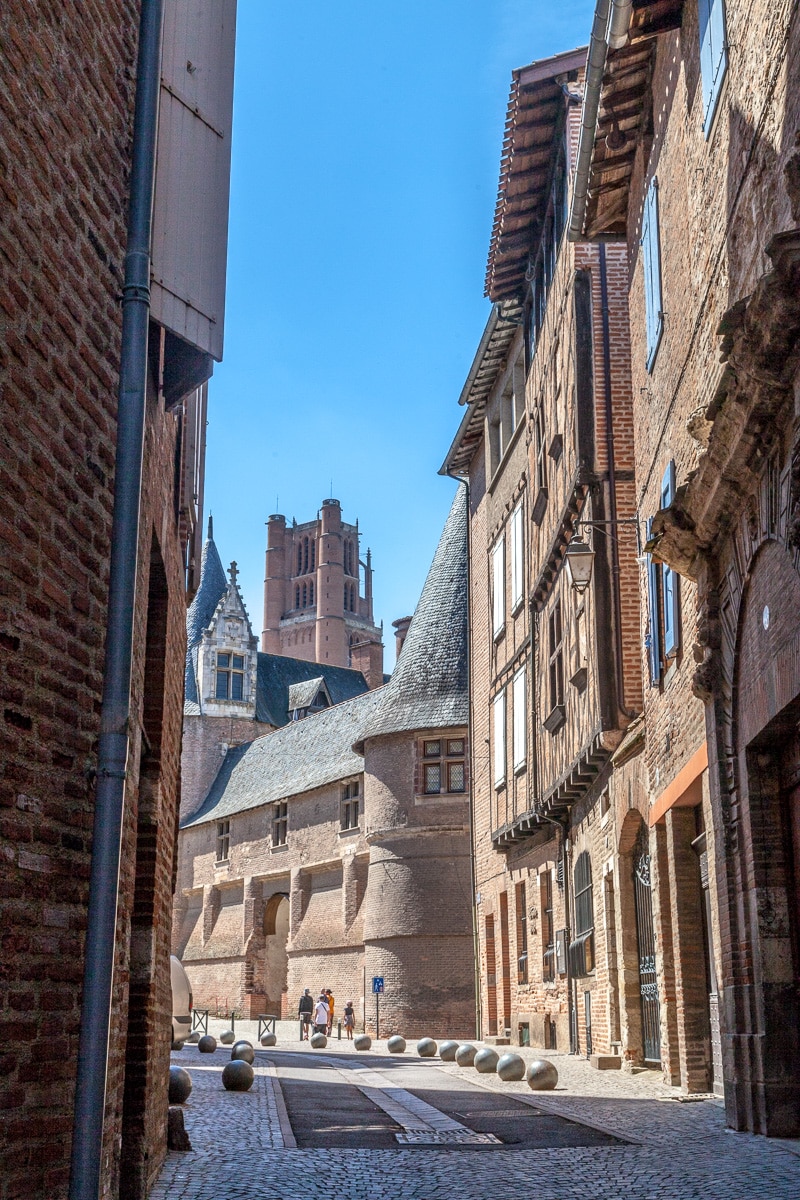 All around the cathedral are Renaissance style houses built during the 15th and 16th centuries when Albi boomed due to the pastel trade. Both Albi and Toulouse experienced great economic prosperity during the late medieval and Renaissance periods because of the trade in “pastel”. A blue dye made from the woad plant, Isatis tinctoria, pastel is a natural blue, indigo dye, and has been used for several thousand years. The name “pastel” comes from Medieval Latin pastellum or woad paste, and it wasn’t until much later that pastel came to mean sticks or crayons consisting of pigment of varied colors.

Returning to the city’s center, we crossed the Pont Vieux (Old Bridge), built in 1035 and  one of France’s oldest bridges still open to traffic. From there we made our way up the narrow old medieval main street, the Rue de la Grand Côté back toward the cathedral and the tourist information office, adjacent to the Place Sainte-Cécile. 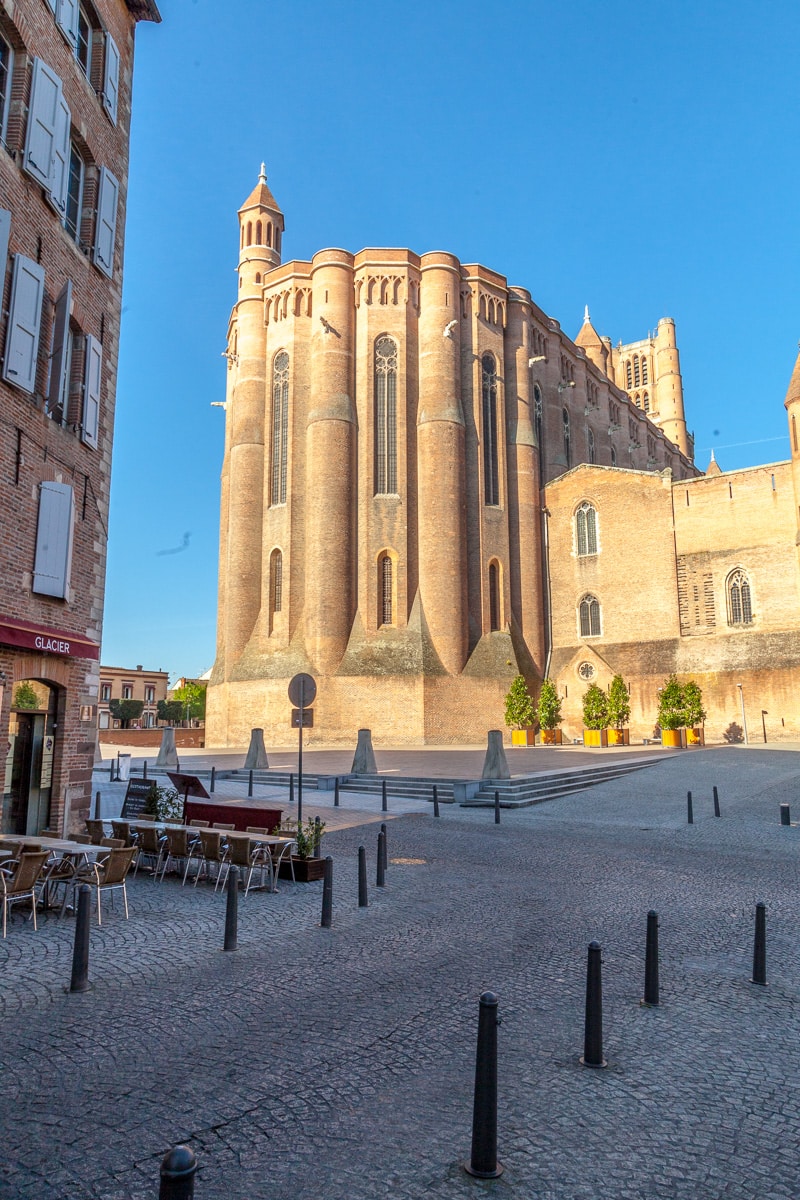 The TI (tourist information office) is always the best place to start a visit to a new town. They not only have lots of maps and printed information, but they generally have someone who speaks English, at least a little. We purchased Albi city-passes, discount tickets to both the Choir of the cathedral and day-long access to the Henri Toulouse-Lautrec Museum.

As mentioned earlier, the Cathédrale Sainte-Cécile’s Southern Gothic style is rather austere and fortress-like on the outside, and from some angles has been likened to a collection of huge grain silos. The militaristic appearance was meant as a defiant assertion of papal power to the defeated supporters of the heretical Cathar movement after the brutal twenty-year Albigensian crusade of the early 1200’s. 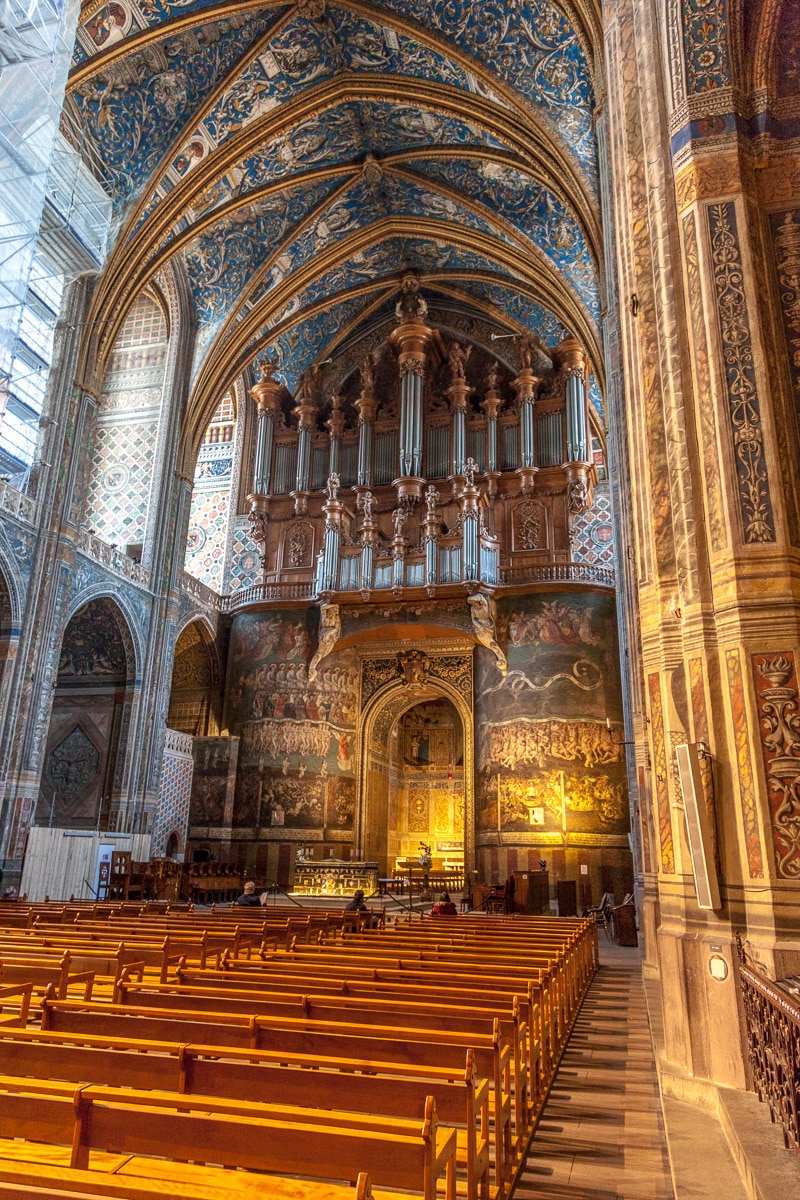 But the interior holds a collection of dazzling art and craftsmanship. Every surface is filled with paintings of religious scenes or ornate designs and sculptures. There are carved woods and lattices of white limestone all beautifully sculpted, and a multitude of statues show incredible detail and expression that retain much of their original color. The high vaulted ceiling is filled with the largest collection of Italian Renaissance frescoes outside Italy. The cathedral’s pipe organ, dates from the early 18th century, is considered one of the three finest classical organs in France.

It was good that we arrived in town early. By the time we had finished our 45-minute audio tour of the cathedral, the crowds had arrived, so we made our way out. 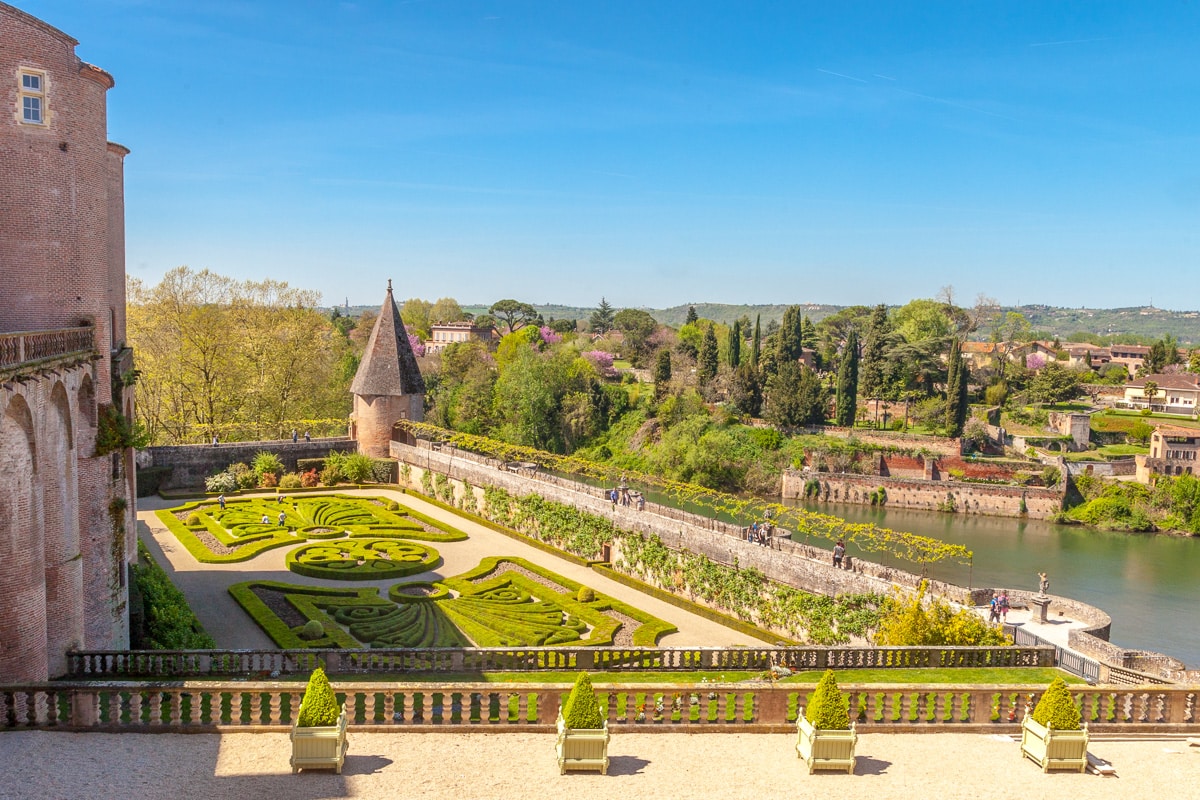 As it was too early for lunch, we walked the short distance to the Toulouse-Lautrec Museum housed in the Palais de la Berbie next to the Cathedral. This massive, fortified Bishop’s palace was completed at the end of the 13th century and is one of the oldest and best-preserved castles in France. 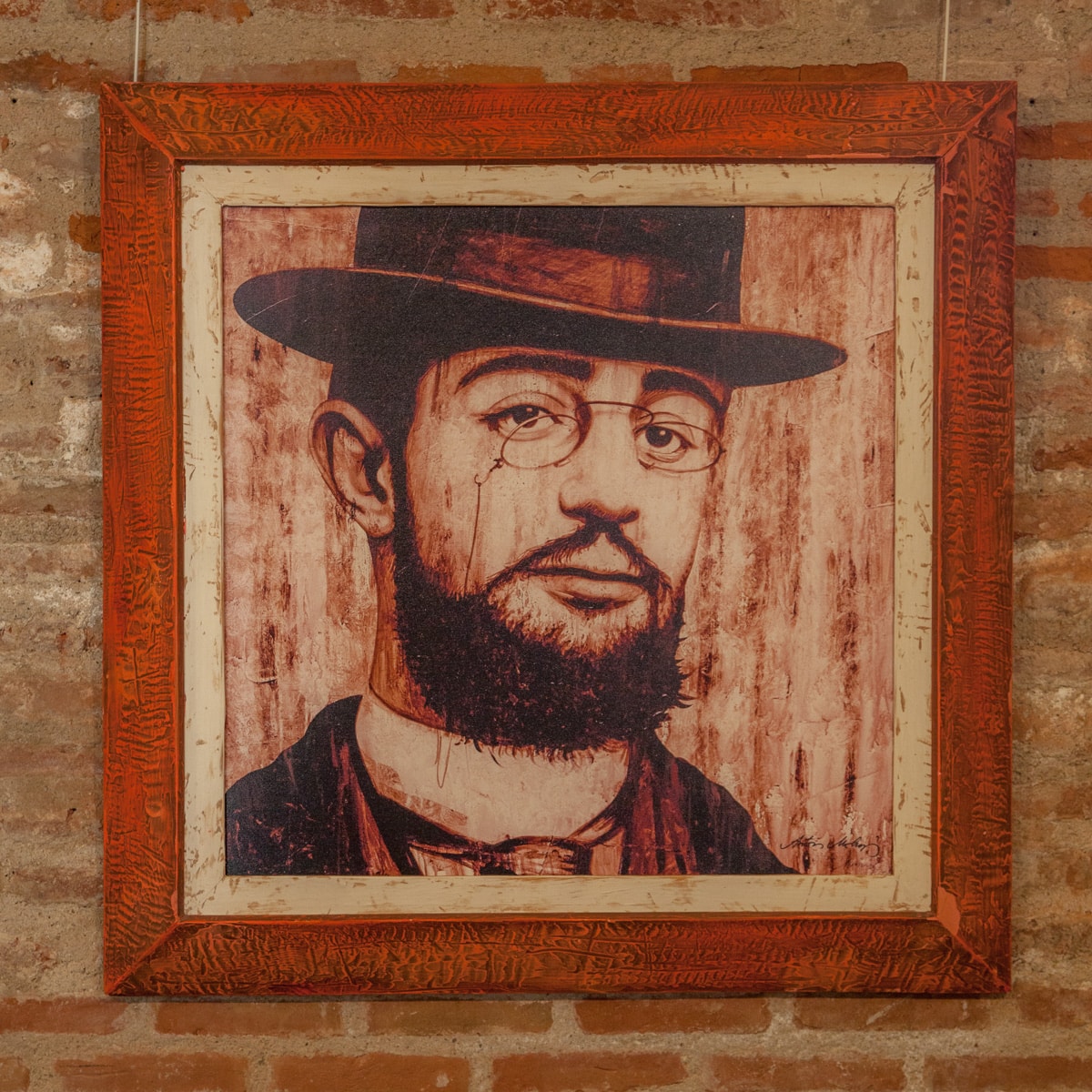 The palace is also the home of the Toulouse-Lautrec Museum. A native of Albi, Henri de Toulouse-Lautrec, 1864-1901, was the great post-impressionist painter, printmaker, draughtsman and illustrator who depicted urban life in late nineteenth-century Paris. The museum houses over a thousand pieces of his works, the largest collection in the world, and is well displayed and informative. Unfortunately, photography was not allowed. 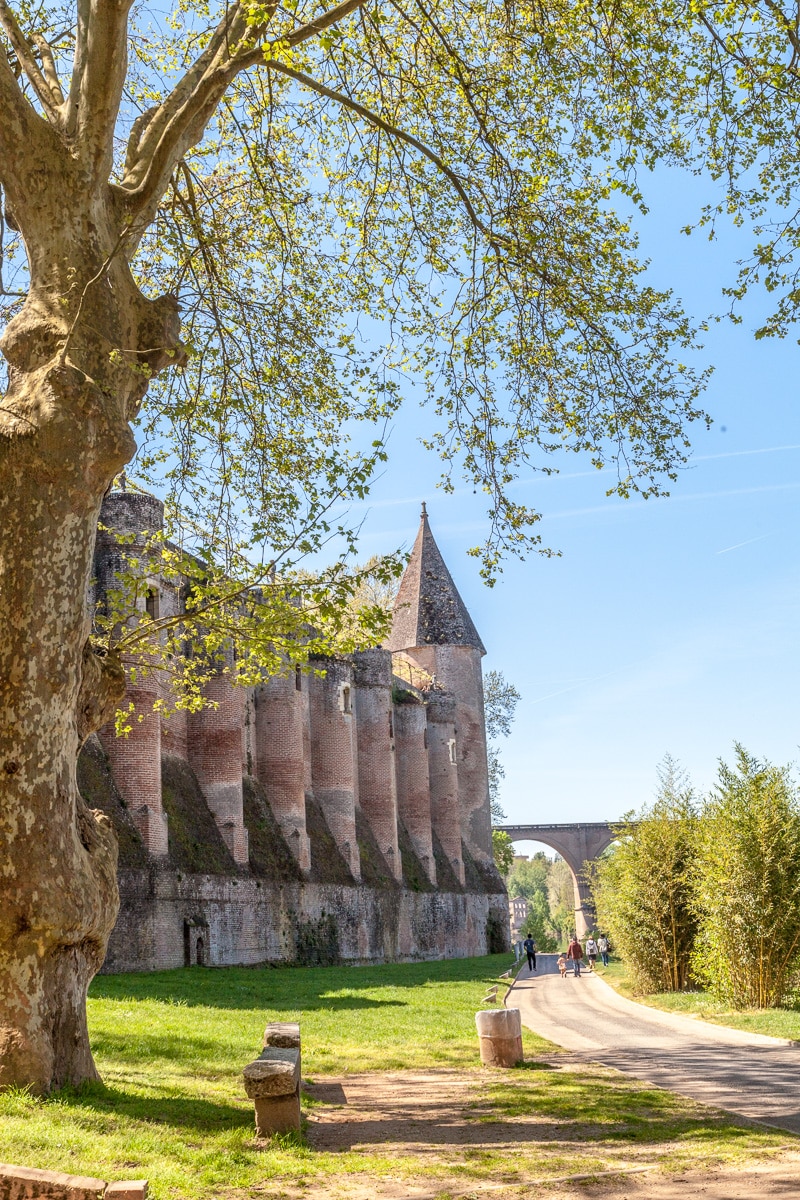 Since the museum closed at noon, we left for lunch with plans to return later. After a little wandering we stopped for a light lunch and then wandered some more, admiring the sights and strolling along the river in the shadow of the Palace and Cathedral. When the museum reopened at 14h (2:00), we returned to finish our visit.

It was a very different town than the when we first arrived. The streets were crowded with residents and tourists alike. So we made our way away from the major attractions stopping briefly to visit a small cloister hidden to the side of a busy shopping street. Shortly, we came across a small square, the Place du Patus Crémat. There was a small bar with tables and seating around a pretty fountain. It was a beautiful afternoon with blue skies and warm sun. It was a place filled with locals, away from the bustle of the city center, and we took our time absorbing the culture and our refreshments. 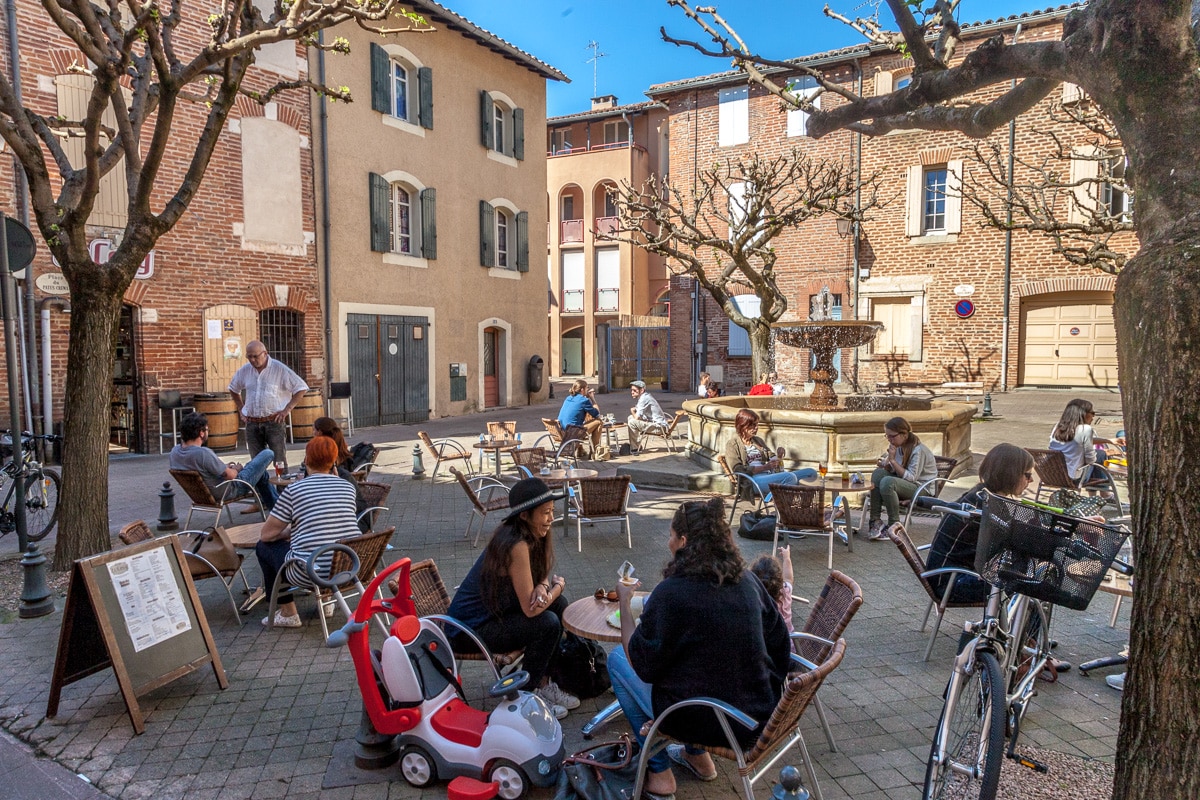 It was soon time to make our way, slowly, to the train station to return to Toulouse. The return was uneventful, until as we were walking out of the station on our way home. I then realized that I had left my wool cap, a prized souvenir of Killarney, Ireland, on the seat. I ran back to the platform, but the train had already departed. Darn. Double-darn. 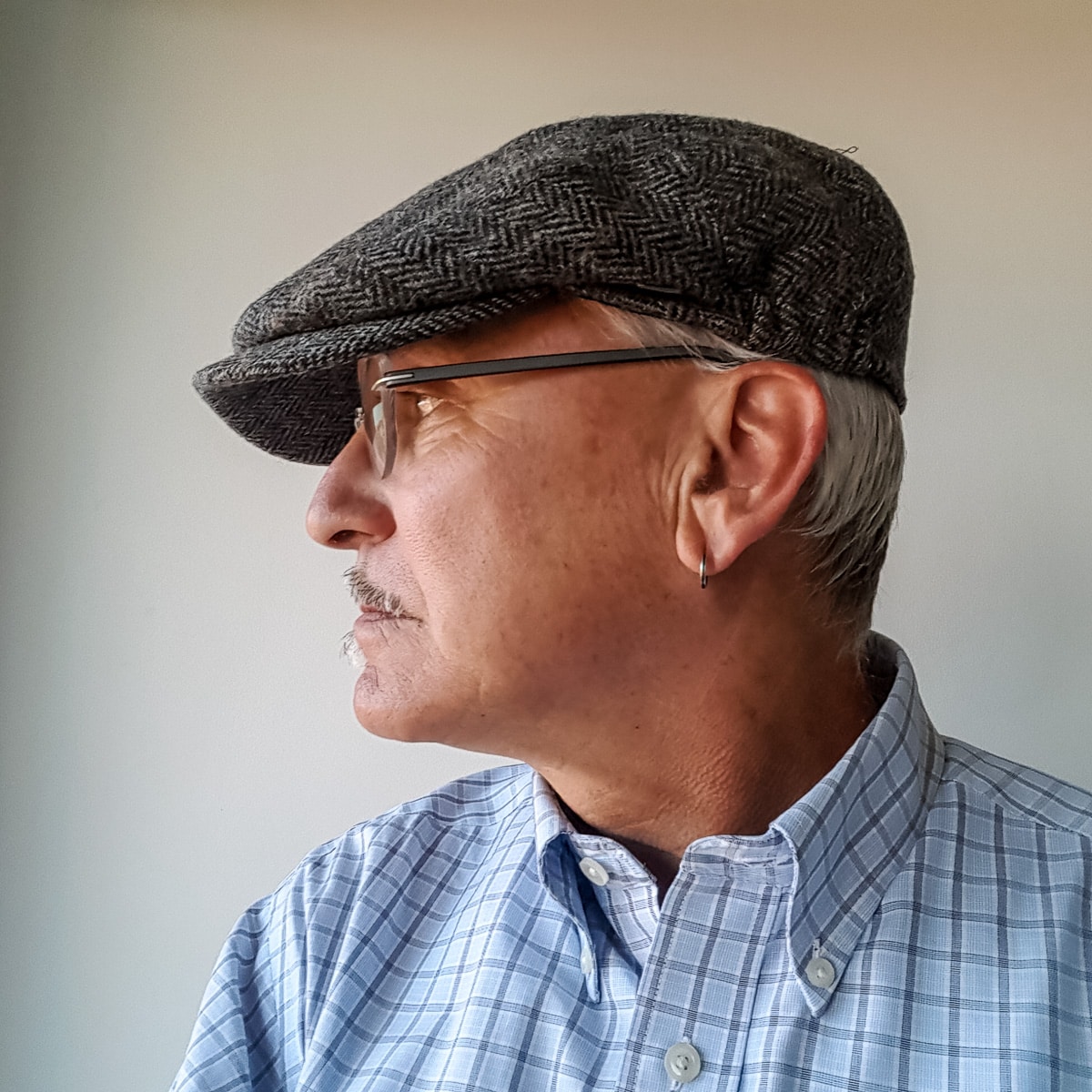 I knew that SCNF (France’s national railway company) had an objets perdus (lost objects) department, and the next day we returned to the station and the objets perdus department, and using my best French and some assistance from a nearby French woman who spoke some English, was able to recover my cap! There was a 5 € fee, but that was much less than a new cap, and nowhere near the sentimental value. So hurray!

Note: The Our Homes page has been updated to include info and photos of our apartment here in Toulouse.