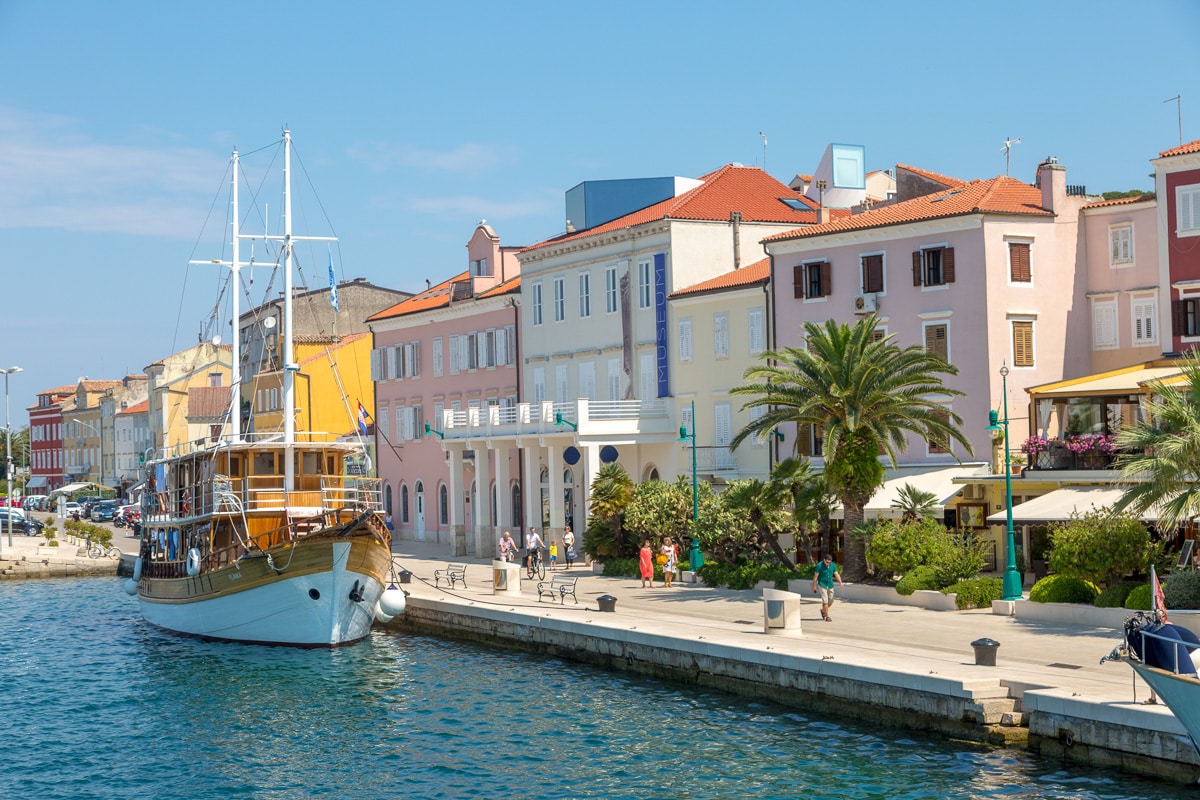 Monday 18 June – After a good night’s sleep in Pula, our ship, the Stella Maris left port at 0630 toward our first stop, Mali Lošinj, whose harbor is said to be the most beautiful in the entire Croatian archipelago. After another delicious breakfast, and a history lecture we arrived at our destination about 1100.

Mali Lošinj is located at the head of Lošinj bay, a long, natural harbor lined with graceful, aged Mediterranean-style houses backed with green hills. A procession of 19th-century sea-captains’ homes lines the seafront, along with boats tied up at the palm-lined docks. 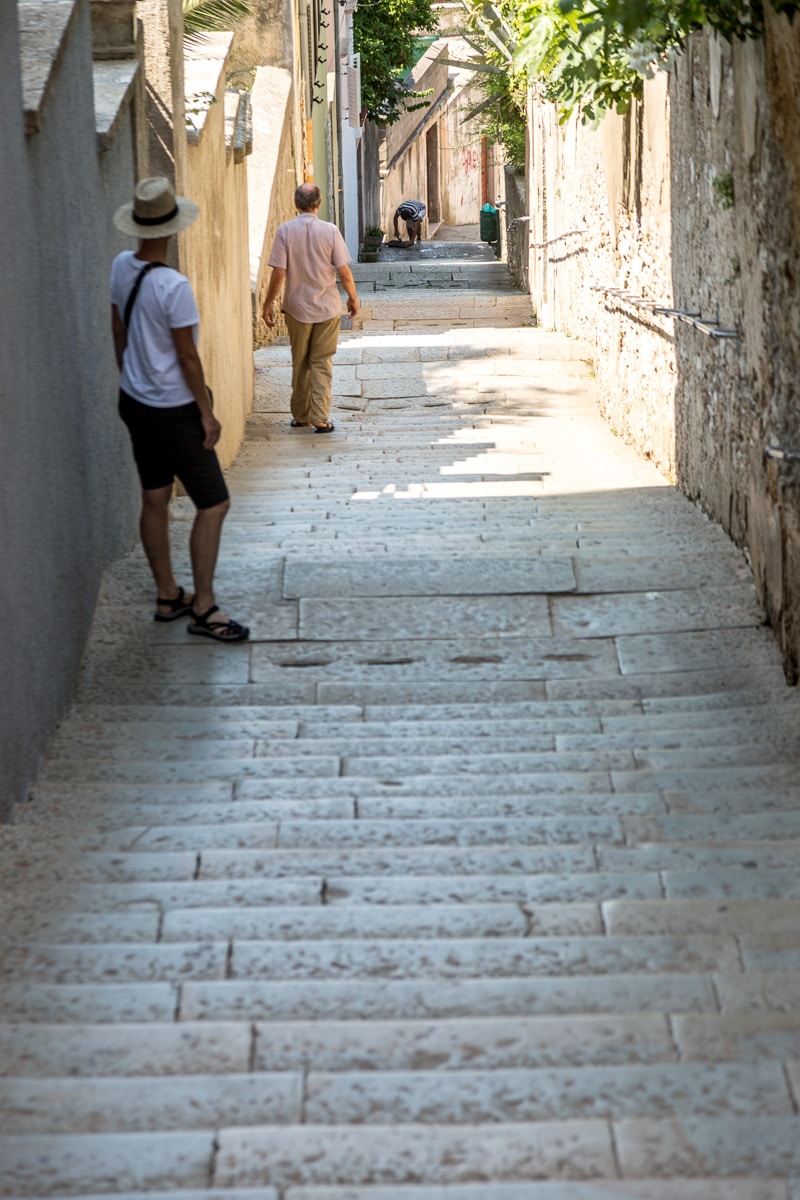 After wandering around the harbor and dodging a few tourists, we meandered our way up steep stairs into the back streets on the hills that surround the harbor. It was too soon that we had to make our way back down to the cozy harbor where we strolled about a little more before returning to the ship to continue on.

It took us about two hours to sail to Olib island, where the tiny village of Olib is home to about 140 inhabitants. That was since the last official count in 2011, although the actual number might not be this high. There, three of us chose to walk the old, main street with Maja, our cruise director, to the Parish Church Assumption of Mary where we spoke with the nun who lives there about their collection of antiquities and life in the little village. 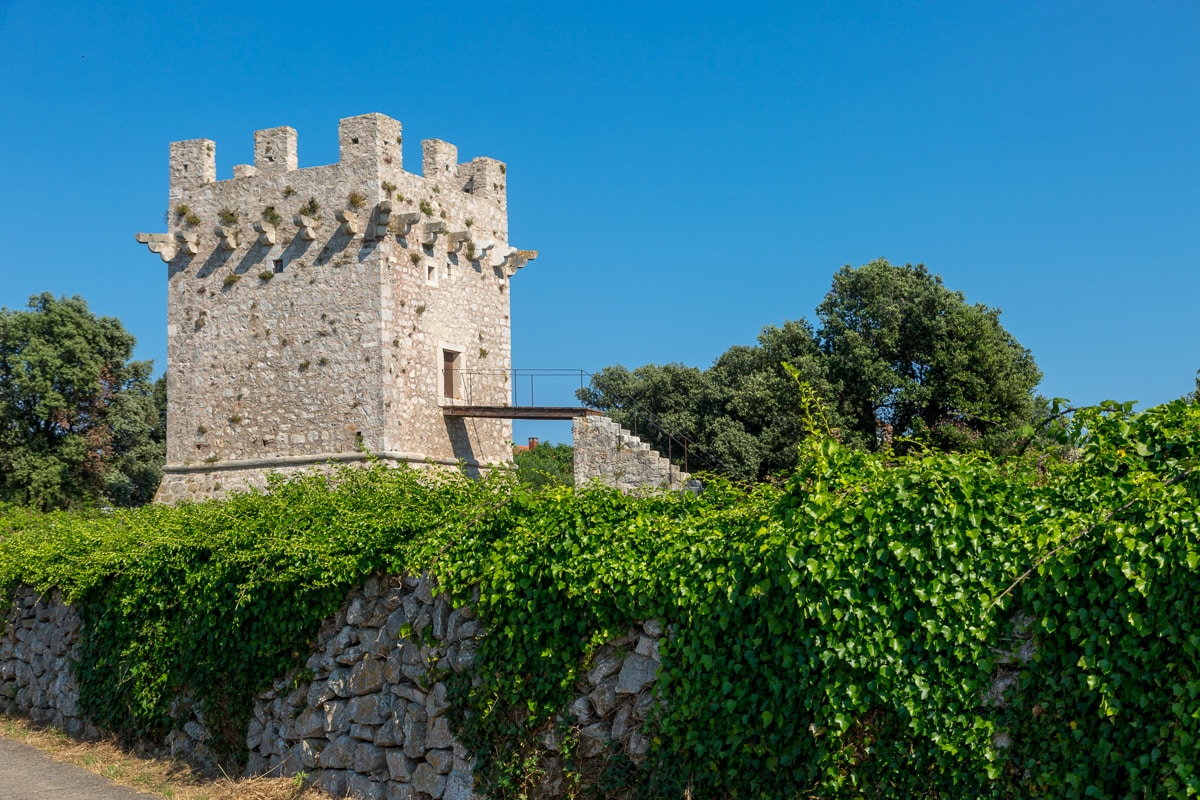 As we returned back to the harbor, Chris took a detour to the “Kula” or Tower of Olib, built during the 1500s as an outlook and to defend the Olibians from pirates and thieves. Jeannie, on the other hand, walked with the others to the beach for a brief swim before we all had to return to the ship. Dinner was on board as we cruised to Zadar where we would spend the night. 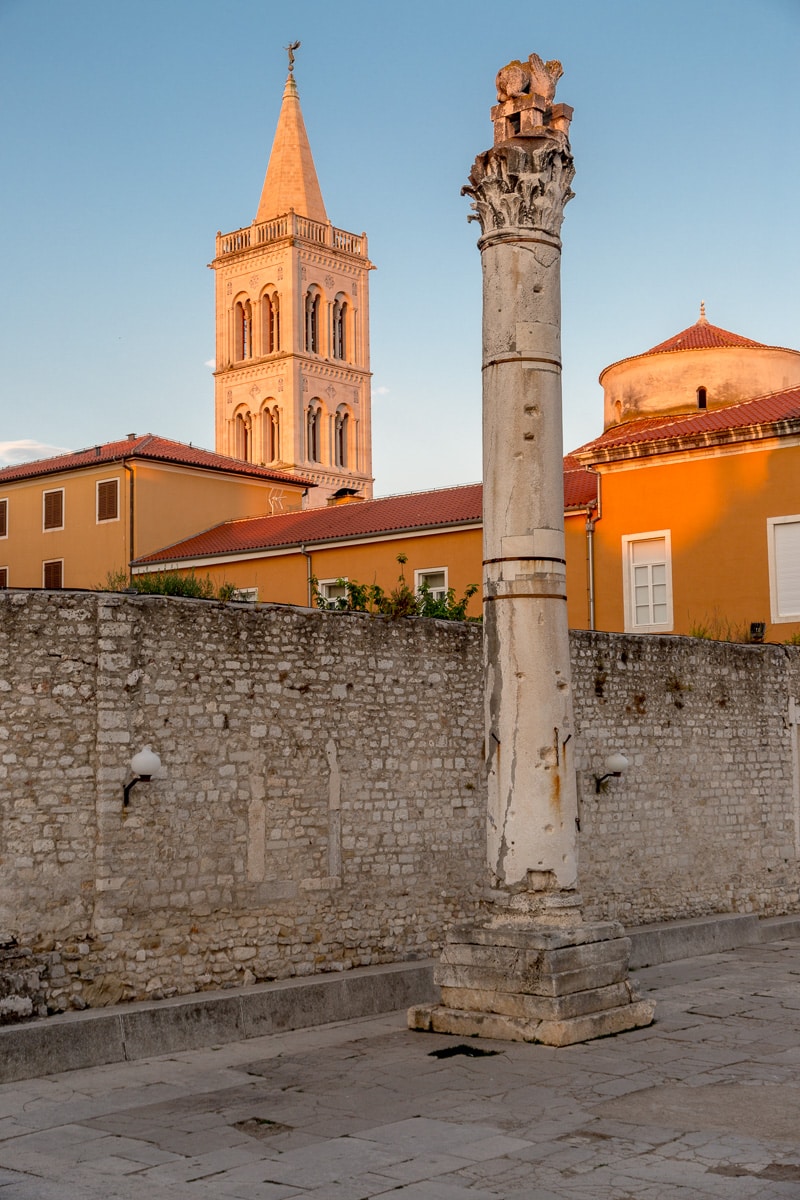 Sometime after dinner, the Stella Maris docked at Zadar, the fifth-largest town and the oldest continuously inhabited city in Croatia. Ancient Zadar was a Roman colony, and the largest on the eastern side of the Adriatic from 48 BCE until the disintegration of the Roman Empire in the 5th century.

With a couple of hours of daylight remaining, we had time to stroll into the town’s historical center that is packed onto a narrow peninsula. Several of the Stella Maris’ crew had recommended a few things that we should see, and we were joined by Jim and Meagan, a couple from Jacksonville, Florida. 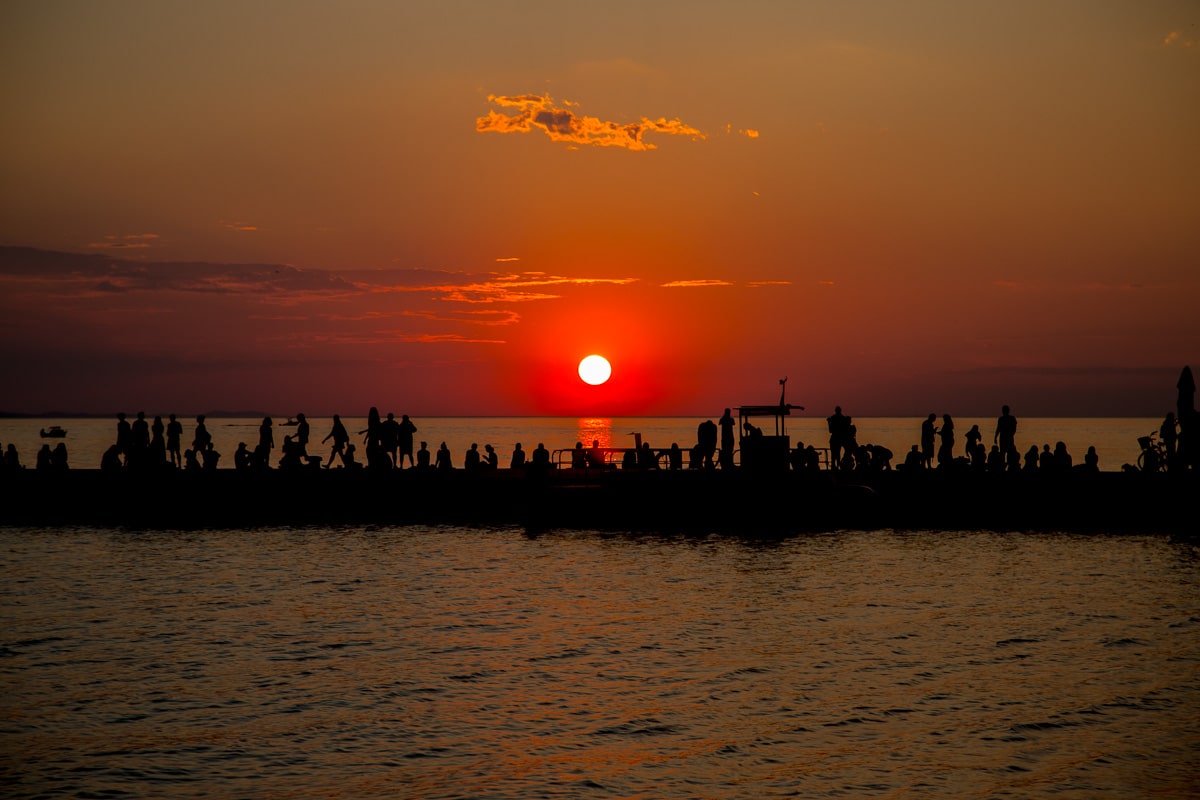 Weaving back and forth through the ancient, narrow streets, we made our way to briefly explore Roman ruins, medieval churches, and Venetian architecture. However the sun was rapidly beginning to set, and in Zadar, one of the most spectacular sights to witness is the sunset!

As we approached the Southern promenade, the seawalls and docks were filled with people all facing West as the sun began to sink into the Adriatic. The entire sky went from blue to bright pink and then changed to orange as the sun dropped below the horizon. Fabulous colors! Film director Alfred Hitchcock wrote in 1964: “Zadar has the most beautiful sunset in the world, more beautiful than the one in Key West, in Florida, applauded at every evening”.

How could such an evening get any better? It was then we came upon the Morske Orgulje, Zadar’s Sea Organ!

The Sea Organ is a “musical instrument” 70 m (230 ft) long with thirty-five pipes of differing lengths and sizes built under the stone stairs along the promenade. The movement of waves created by tides, wind, or passing boats, pushes air in and out of the organ’s pipes to create the notes.

The Sea Organ of Zadar, Croatia:

The pipes have been carefully tuned to produce specific musical tones at random. Yet, despite the unpredictability of when notes are sounded, overall the music is wonderfully harmonious. The sounds are unlike anything we have heard before, and somewhat reminiscent to a whale’s song. 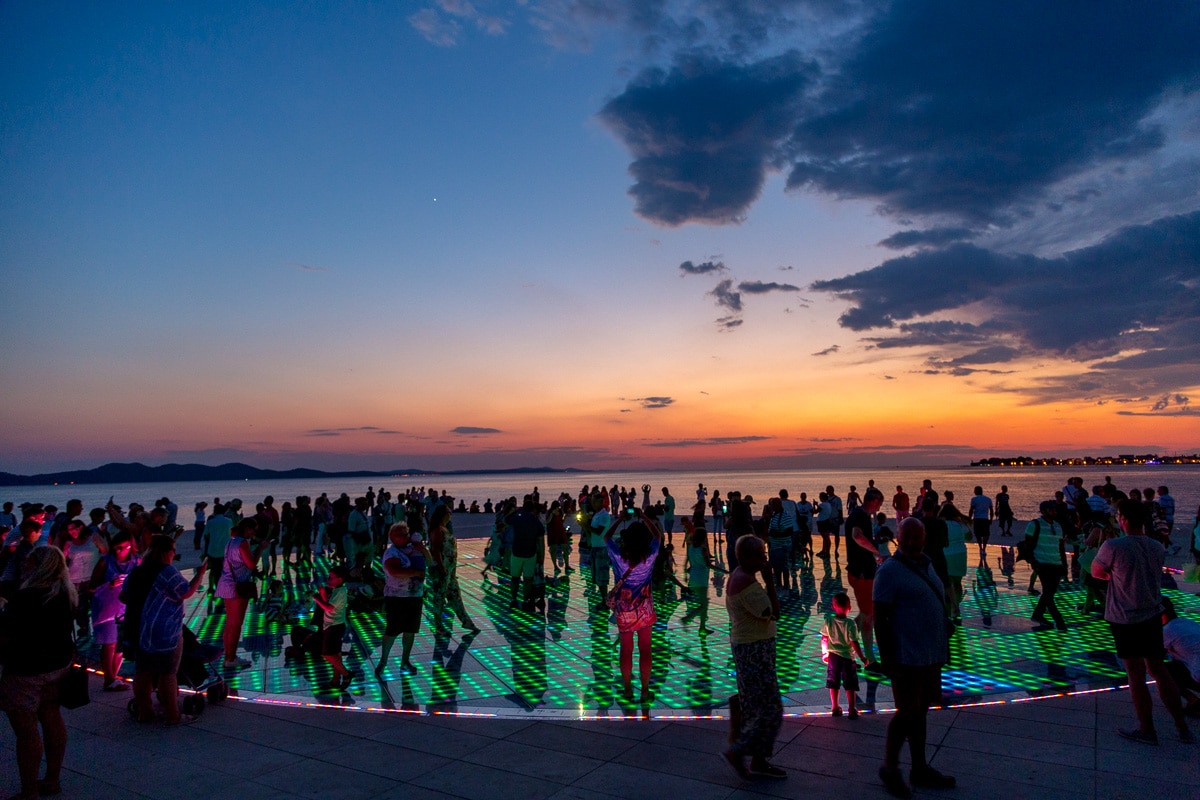 Thinking that the evening couldn’t get any better, we continued down the promenade on the southern quay toward the end of the peninsula. There, under the feet of hundreds of people that had just watched the sunset was the Pozdrav Suncu – the Monument to the Sun or the Greeting to the Sun.

The monument is dedicated to the Sun and consists of three-hundred multi-layered glass plates level with the stone-paved promenade. In the shape of a circle 22 m (72 ft) in diameter, photovoltaic solar modules underneath store electricity during the day and power 10,000 bulbs. These light up at night in a computer-coordinated light show that complements the colors of the sunset and synchronizes with the sounds from the Sea Organ. The Pozdrav Suncu also generates enough solar power to also light up the entire waterfront.

On further observation, it became clear that while the large circular Monument to the Sun represented the sun, there were several smaller, lighted circles lined up proportionally representing other planets of the solar system. While there we bumped into a few of our other traveling companions before heading back to the ship.

A nice thing about small-boat cruises is that they generally stay in port overnight, thus we often had the evening and the early morning in each port so that we could see it from different perspectives. 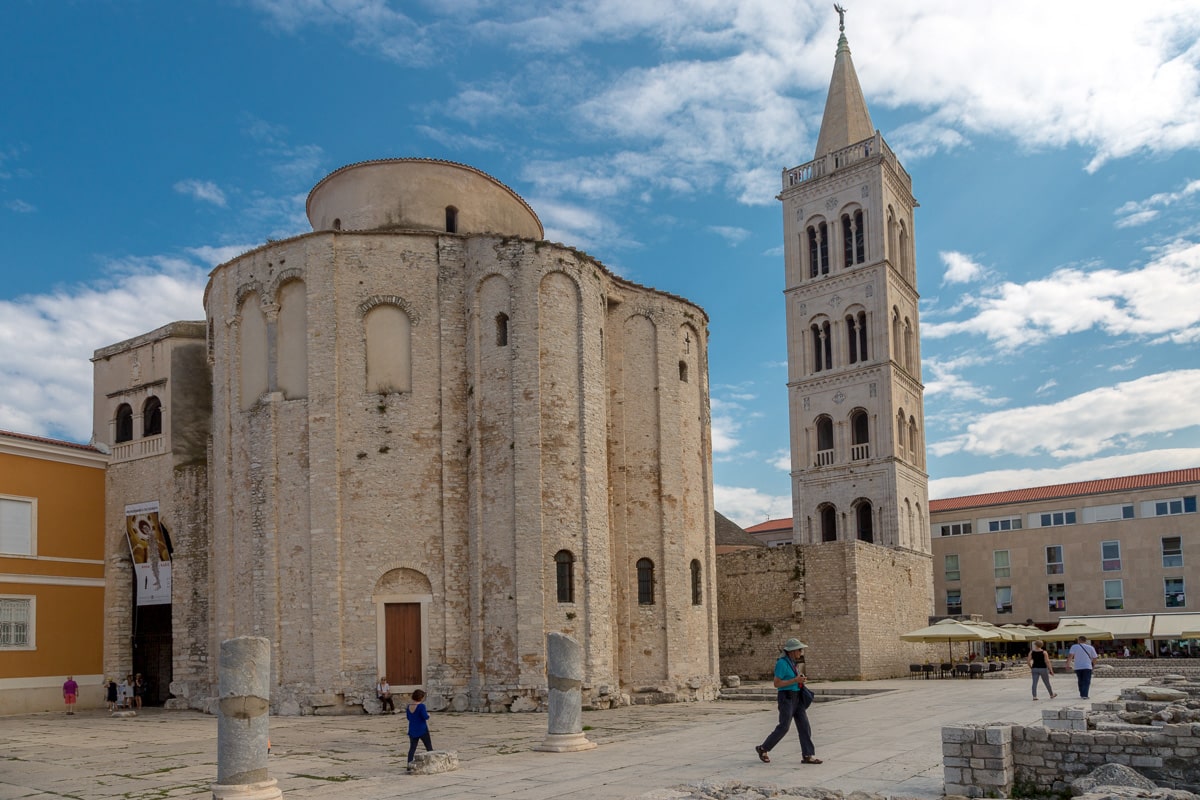 Tuesday 19 June – After breakfast, we went back into Zadar for a very interesting tour of the city with a local guide. Afterwards we returned to the ship, walking pretty much the same route as our prior evening’s stroll. As we passed the sea organ, it continued to play but seemed a bit more subdued since the sea was calm, and the Monument to the Sun was in collection mode under the bright morning sun.

Boarding the Stella Maris, it was time to move on, but this day was just getting started, and there was much more to come.