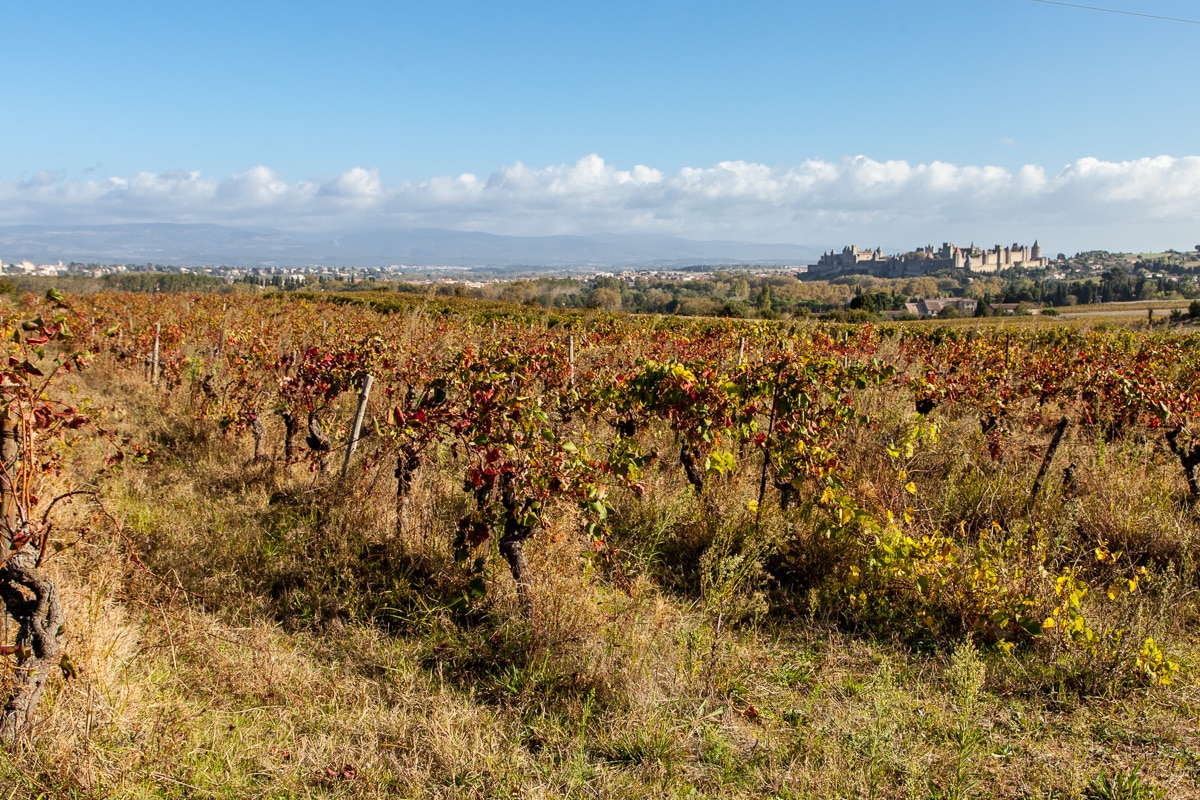 As we took the roads out and away from Carcassonne, the massive fortress dominated the view behind us for quite a while. Even from a distance the towers could be seen above the vineyards and trees until they finally disappeared from view and, for us, became a wonderful memory.

The narrow country roads we were now traveling were designated a scenic bicycle route. Winding through the vineyard and forest covered hills, these rural lanes would make for a wonderful bicycle tour between Carcassonne and the Benedictine abbey of Saint-Hilaire about 30 km away. 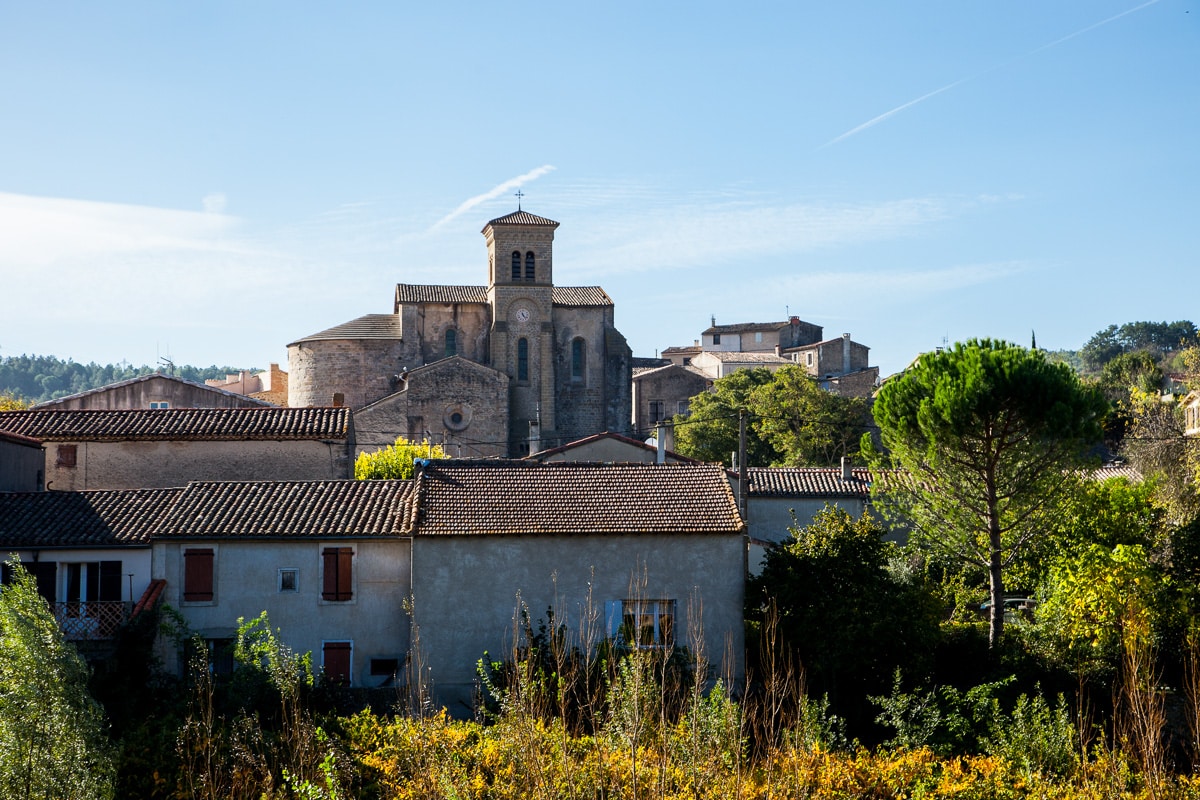 Located in the picturesque valley of the Lauquet river, the abbey was founded during the 8th century. The monastery was relatively prosperous until the thirteenth century, but at the time of the Hundred Years War (1337 to 1453) it suffered devastations of more wars, the ravages of the Black Death and famine. The abbey continued to decline, and was closed in 1748. Though the abbey experienced many difficulties over the centuries, wine historians believe that the world’s first sparkling wine was produced in this region in 1531, by the monks at the abbey in Saint-Hilaire.

Today the quiet little hamlet of Saint-Hilaire surrounds its well preserved abbey, and like the other monastic houses we have visited, we found this to also be a peaceful place to wander. The simple and beautiful cloister, a structure that originally functioned to separate the monks from the world outside, was warmed by the morning sun and brightened by sounds of the small fountain at its center.

In the abbey’s main house, there is a marvelous 16th century French-style ceiling which shows a floral and animal repertory, but also different scenes, including some rather ribald images that the abbot, a purely secular official at the time, alone could view. 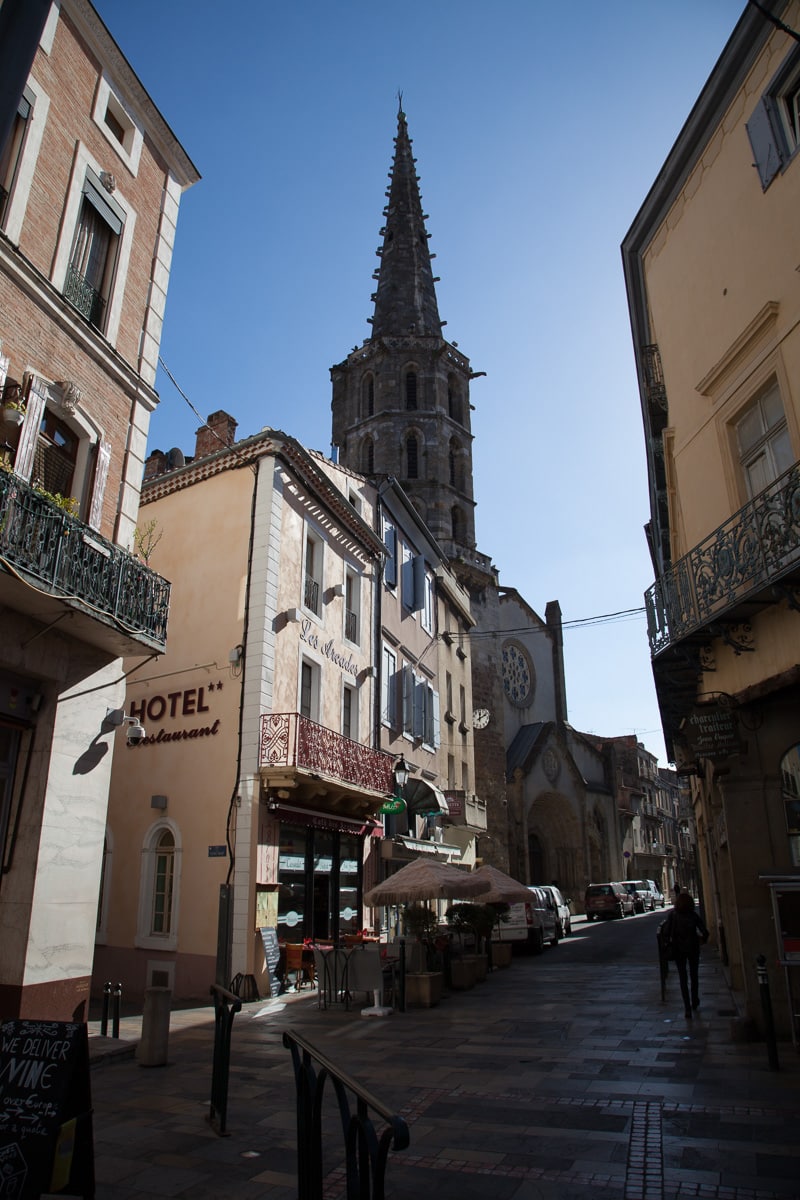 Leaving Saint-Hilaire we continued toward Limoux in search of lunch. We found our way to the heart of the town at the Place de la République, and after a little wandering, found a small restaurant filled with locals. The plat du jour, roast pork and mashed potatoes, was delicious, and nourished us for the rest of the drive back to Narbonne.

After lunch we were back in the car, for a while the road followed the river Aude, which came through Carcassonne in the north. Flat and curving, the road was an easy drive, first passing warehouses, then homes, then more rural as the terrain turned into verdant, rolling hills.

Before long we began to enter a more mountainous area, forested with less farmland. The GPS on our phones had been unavailable since we left Limoux, but we had a good map.

As we drove deeper into the mountains, the road became narrower to the point that it was little more than a single vehicle wide. Twisting, tortuous, curves wove through the trees occasionally revealing the beautiful mountains around us, as well as the sheer drops just beyond the edge of the road. 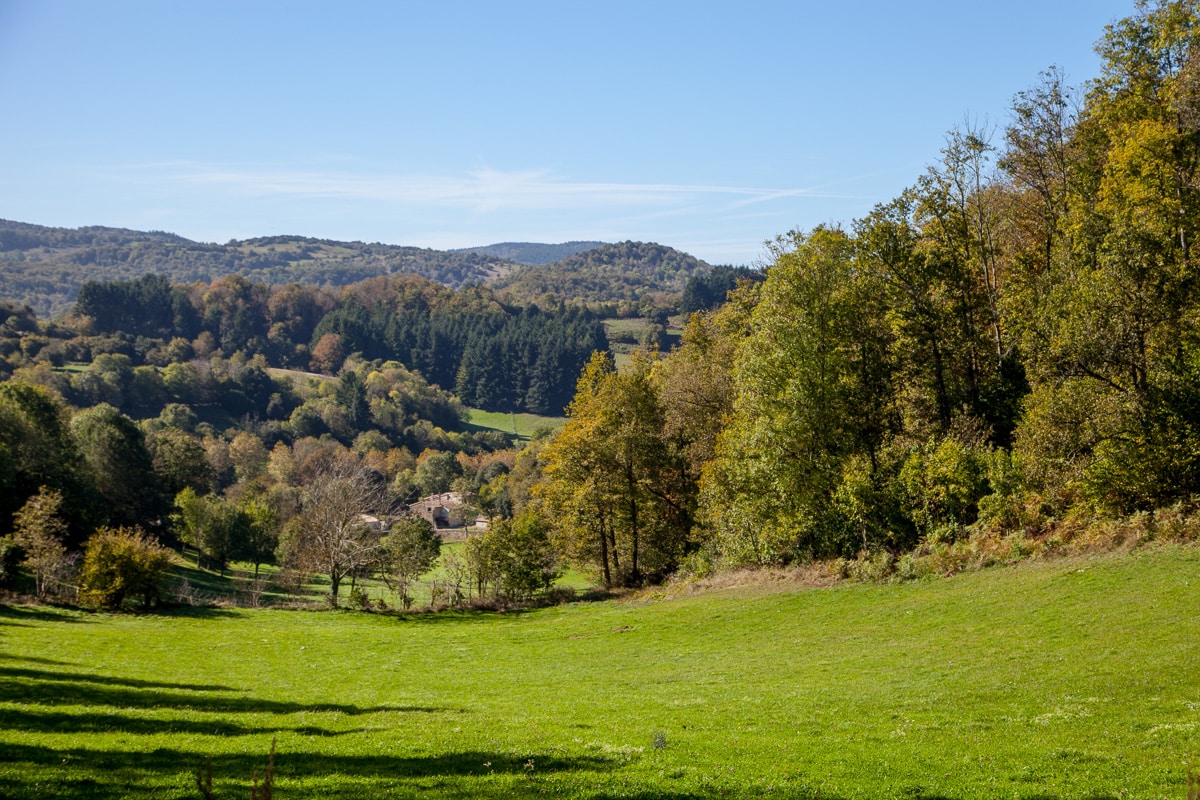 We were, for the most part, the only car on the narrow road, until another auto approached us. Alarmingly close, we passed safely even though the tires of both vehicles skittered on the gravel at the edges of the pavement.

Zooming along at 30 to 50 kph (18 to 30 mph), we weren’t covering much ground. The map showed the road ahead of us to be even more convoluted with larger mountains yet to come. The only good things were that the scenery was beautiful and the road wasn’t any narrower.

The time was ticking by, and the 100 km (60 mi) to Narbonne was looking like a potential obstacle to returning our rental car before the office closed and we were charged for an additional day. Slowly making our way on the mountain roads through lush forests and small villages, I would have loved to have taken the time to stop and photograph the buildings and landscapes, but time didn’t appear to be on our side.

Along the way we encountered several more cars. The room to pass each other was so close that I was concerned for the safety of the side mirror, not to mention the tires that hugged the side of the road surface. Fortunately, the only larger vehicle we met was on a marginally wider stretch of road.

Gradually the road began to descend and become less twisting. As it straightened out and began following a small stream, the l’Orbieu river, which passes through Lagrasse and the abbey we had visited earlier on this trip. At this point, I knew where we were and the roads and distances were familiar.

Breathing a little easier, we realized that we were slightly ahead of schedule. Had I known the route that we were on a little better we could have taken our time. And Jeannie, who is prone to motion sickness would have not have had the slightly green hue as she does when I have fun driving on twisty, mountain roads.

We arrived in Narbonne with time to spare, turned in the car, and took a slightly earlier train back to Montpellier, where we had an early dinner, turned in, and dreamt of the many abbeys and castles we had visited, and the many more that we didn’t see in this beautiful and rugged part of France.