Our morning walk through the Cité de Carcassonne was, once again, cold and windy. Though this time we were bundled, the temperature difference between being in the sunlight and being deep in the shadows of the centuries-old stone walls was tremendous. On top of that, it seemed that the wind was stronger whenever we stepped into the shadows. Even though the streets were pretty much devoid of tourists, likely because of the weather, we decided to return to the B&B to begin the day’s adventure to Lastours. 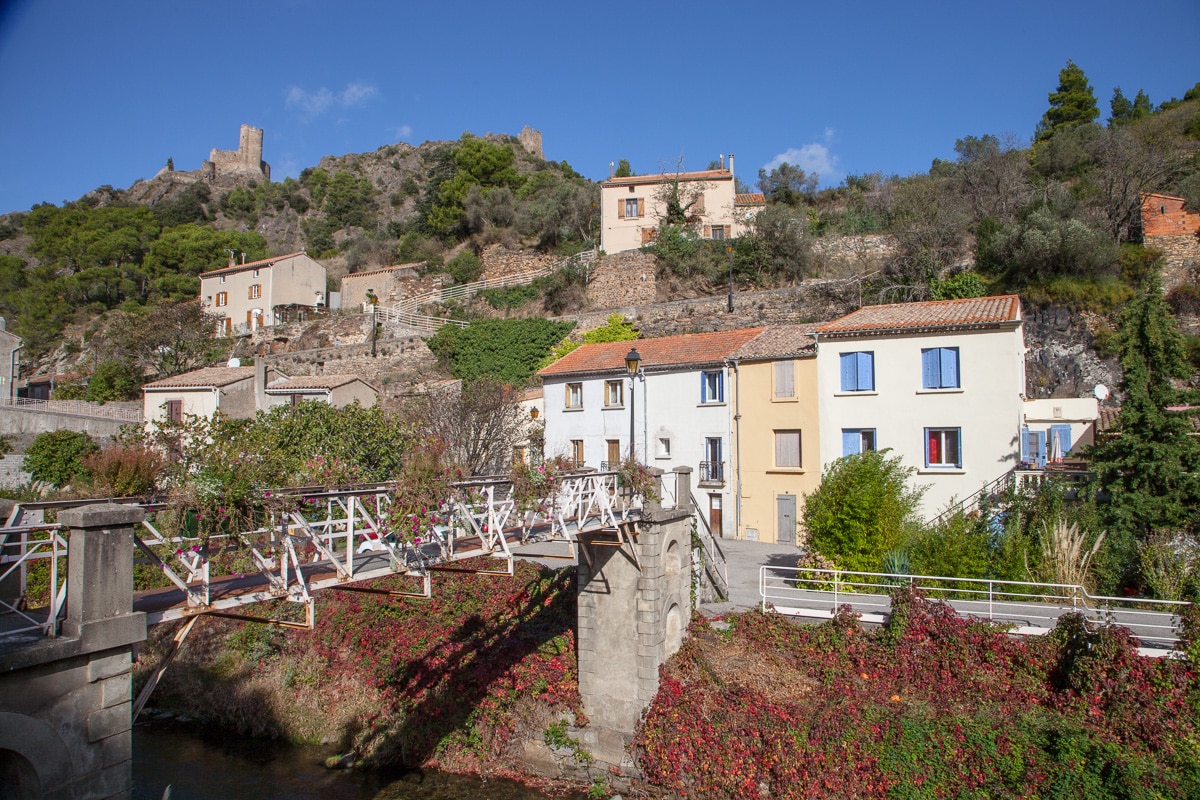 The road to Lastours, after leaving the urban area of Carcassonne, wound alongside the Canal-du-Midi for some distance. The canal and road were lined with large Plane trees that cast their long shadows across the road. The soft, golden light from the canopy of leaves above illuminated the route. Moving away from the canal, we passed through farmlands and vineyards, and as we gained elevation the road twisted into the rocky hills.

Lastours is a small village on the l’Orbiel river less than 10 miles outside of Carcassonne. The area has a long history dating to the Middle-Bronze Age around 1500 years BC. From antiquity, iron, copper, lead, and gold deposits made the village an important mining center. Strategically placed fortifications to protect the village were first built in the 11th century on a narrow rock outcrop 1000 feet (300 m) high along a rock wall just 1300 feet (~400 m) long by 165 feet (~50 m) wide. There are four castles high on the rocky spur isolated by the deep valleys of the Orbeil and Grésilhou rivers. 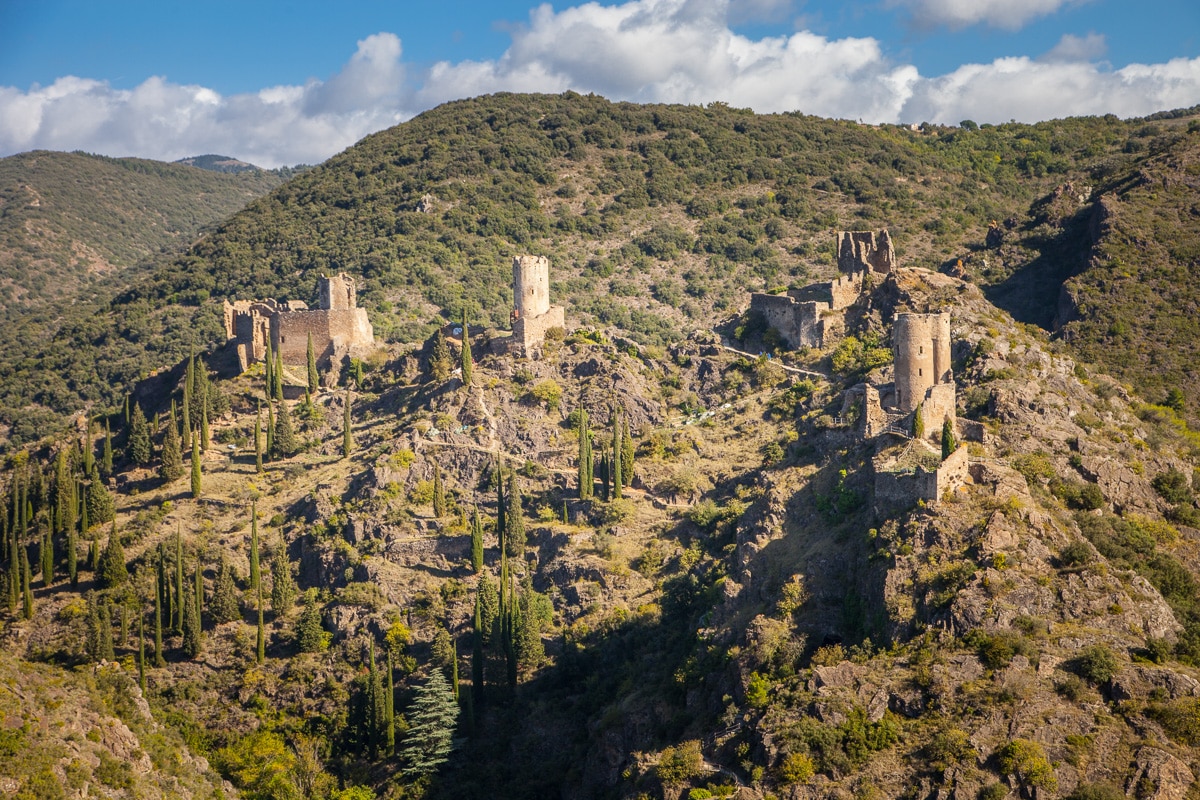 We parked near the old textile mill which had flourished in the 19th century. Beginning the steep climb up to the castles we were behind a young French couple carrying their small children in a backpack carriers. The youngest infant was “singing” happy baby melodies as we all climbed the stairs and rocks upward. At one point they allowed us to pass and Jeannie asked me if she could brag that we passed four young people on the climb.

The steep and rugged ascent, made easier by rough stairs and occasional handrails, allowed for breathtaking views of the sparsely wooded, rocky terrain around us. The thought of the defenders of these castles having to carry food, supplies, water, weapons and everything else they required up to the peaks was unimaginable, not to mention the builders of the structures.

Other than for the protection of the various mines in the vicinity, the castles served as protection for the population Lastours which was a center of Cathar religious activity during the Albigensian crusade of the 13th century. 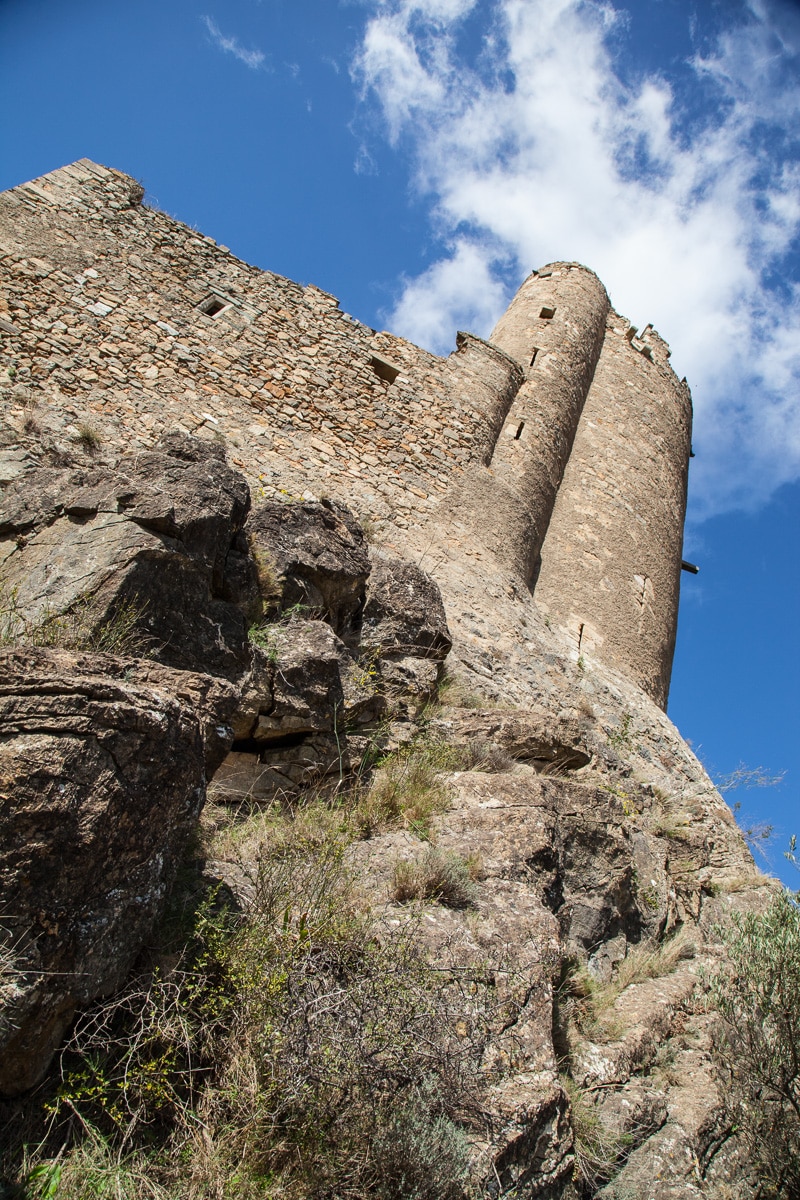 The four structures, though in ruin, are truly magnificent due to their location. The climb to visit them is easy though strenuous. Wandering within the remaining walls and climbing the surviving towers was an experience that we shall not soon forget.

Back down at the village we were both ready to sit down to a late lunch but nothing was open, so we opted for heading back into the Carcassonne to eat. The return along the same roads was as delightful as the morning’s ride out.

Arriving in town we parked on the opposite side of town, and walked to the Centre Ville (Town Center). When one refers to the newer part of Carcassonne, it is the Ville Basse, on the other side of the Aude river, that dates back to the Middle Ages and was created after the crusade. Now it is the center of a major AOC wine-growing region. However, a major part of its income comes from the tourism connected to the fortifications (Cité) and from boat cruising on the Canal du Midi.

After enjoying a small lunch and a long stroll on flat streets, we returned to the B&B where we cleaned up and began packing for tomorrow’s return to Montpellier. Returning to town for another long walk before dinner, we located a store to buy Jeannie some chausettes or socks, as the temperatures were a little cooler than we had expected.

We arrived at the restaurant early (7:00) for our 7:30 reservation – please note that most restaurants don’t even appear to be in business before 8:00. Luckily there was a wine bar next to restaurant where we had an excellent glass of wine that took exactly 30 minutes to drink. 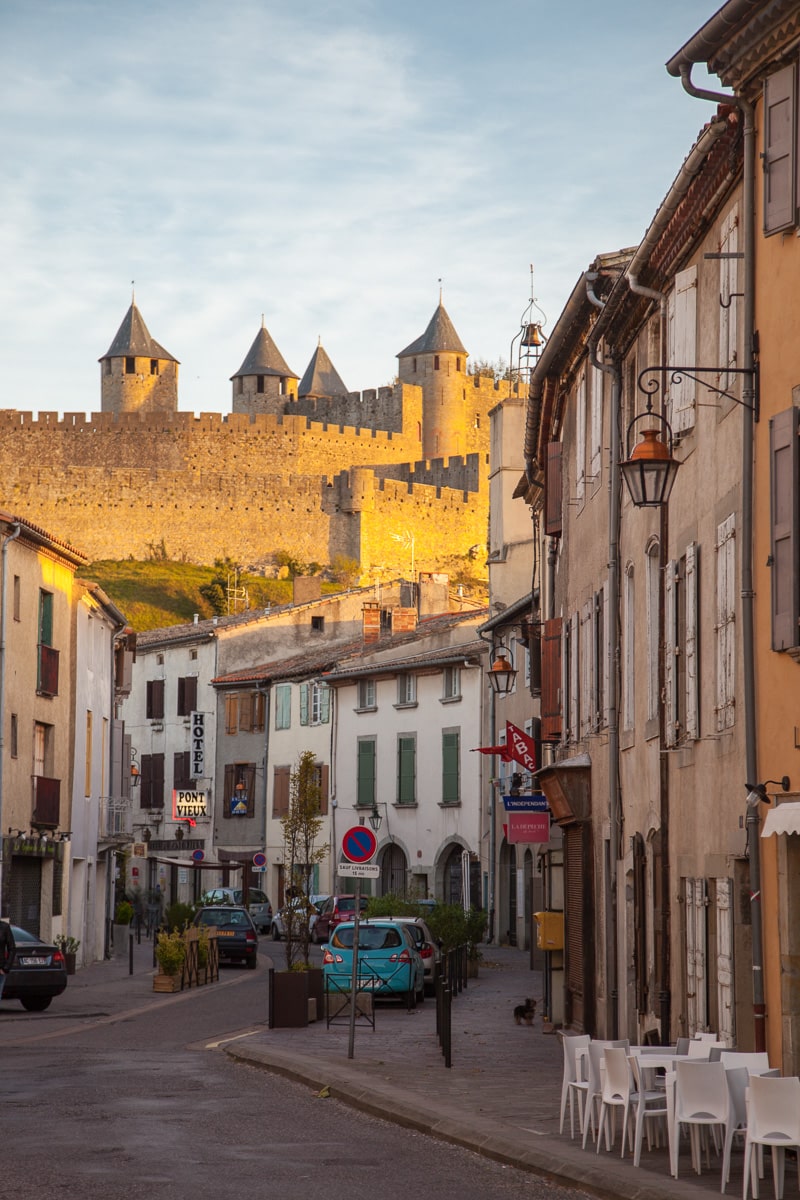 Walking the 15 steps to the restaurant, Les Mets Tissés, next door, we were pleasantly surprised at the delicious aromas that welcomed us in. The decor was upscale and modern within a space that was at least 200 years old. The friendly hostess seated us, took our orders, and we were the only patrons for almost half an hour. Slowly the place began to fill as we finished our truly excellent meal. Only a 10 minute walk over the 13th century Pont Vieux or Old Bridge with views of the fortress over the treetops and buildings and we were back to our B&B.

Our last morning in Carcassonne began with another good breakfast and stimulating conversation with another couple sitting with us. Afterward, we packed our little Fiat and departed.

Our target for today was to be Abbaye Saint Hilaire and Limoux before finishing in Narbonne for the train back to Montpellier. Little did we know that the road ahead would be so … interesting.