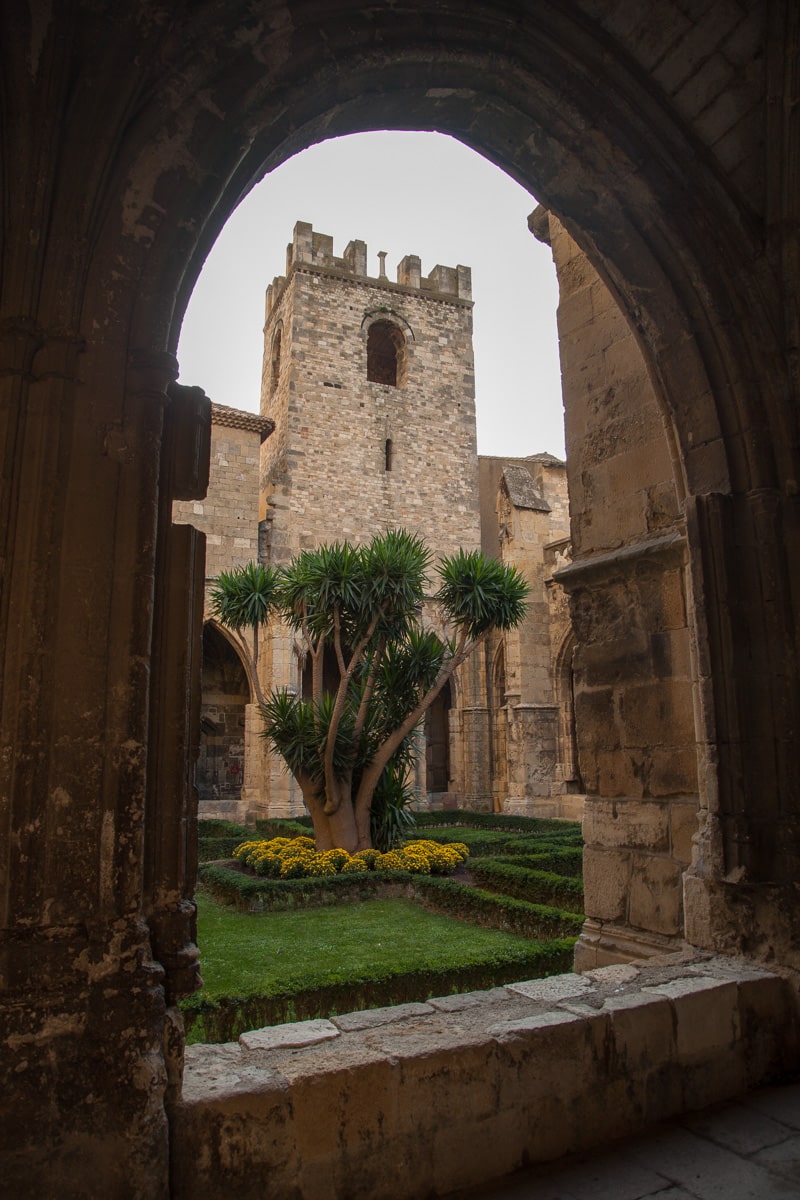 There are so many places that we would love to visit, and many we can get to via train, bus and foot. But there are many others that will require a car, and Carcassonne and its surrounding area was one of those places. Besides, it was time to take an expedition that was more than just a day-trip.

Our plan was to take the train from Montpellier to Narbonne, where we would rent a car and drive the backroads to Carcassonne visiting several abbeys along a circuitous route through the region’s wine country.

The train left Montpellier at 8:50 and arrived in Narbonne just over an hour later. Pulling our one piece of luggage to the rental agency, we picked up our little Fiat 500 and made our way out of town. Along the way we passed vineyard after vineyard, and on some of the hilltops in the distance we could see ruins of castles or fortifications from the 12th century. This was going to be a good trip. 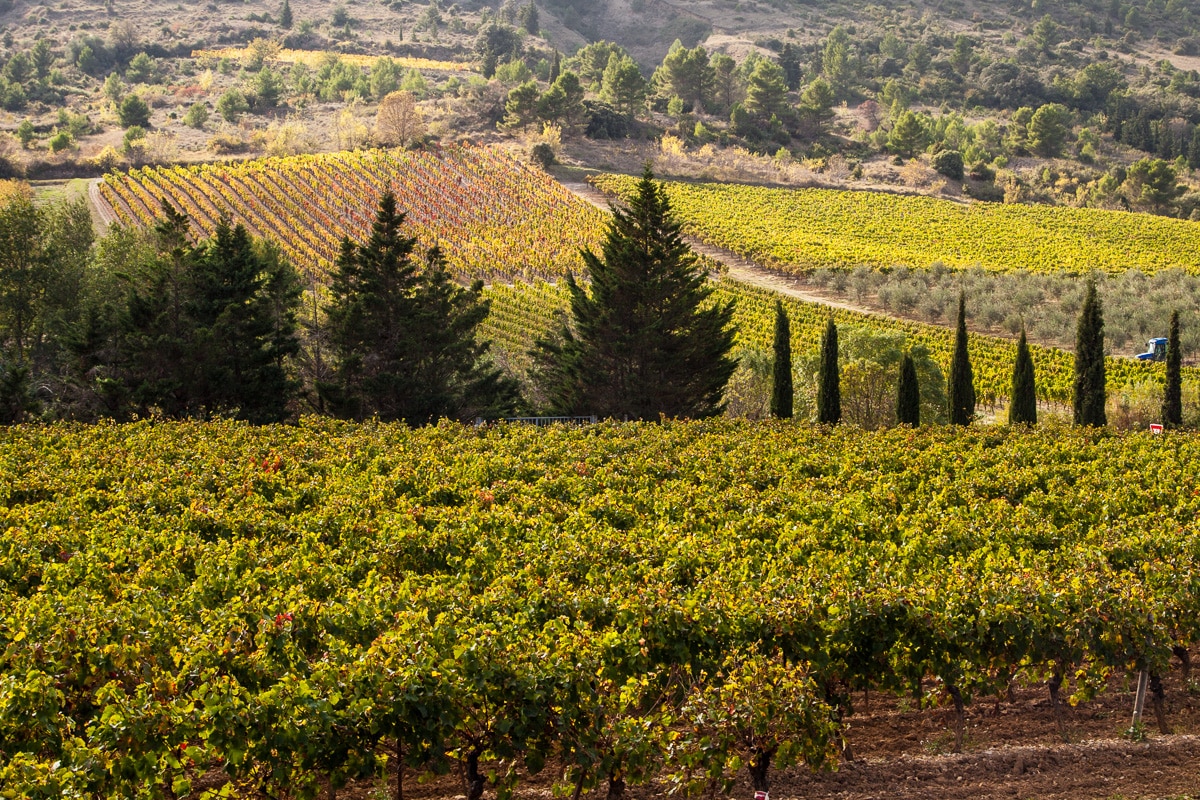 We finally navigated to the correct road and made our way to the Abbaye Fontfroide. Founded in 1093 as a Cistercian monastery, it was dissolved in 1791 during the French Revolution. In 1858 it became a functioning abbey once again when a small community of monks moved in. A law of 1901 put an end to monastic communities, and the last of the monks fled to Spain. The abbey remained uninhabited until 1908 when the buildings, which are of great architectural interest, passed into private hands.

The secluded location of Abbaye Fontfroide in a quiet wooded valley within the Corbieres mountains adds to the contemplative atmosphere of the beautiful structures. The ancient stone walls and arches glowed in the morning light as we wandered from room to room. Our footsteps softly echoed on the worn stone steps as we entered the cloister. The columned arches elegantly wrapped around the small garden within. A gentle breeze quietly wove its way through the leaves of the large wisteria vines growing in the corner. This was a peaceful place.

As we ascended some stairs, we passed stained glass windows that had been replaced during renovations with windows fashioned from stained glass fragments rescued from churches damaged during WWII. Though we could have remained at the abbey for hours, the need to move on returned us to the 21st century.

Traveling once again on small rural roads, we were now deep in wine country. The region has only in recent decades become notable for the quality of the wines it produces. Around every turn the hills were covered with grape vines, their leaves were starting to turn golden as the end of the growing season approaches. 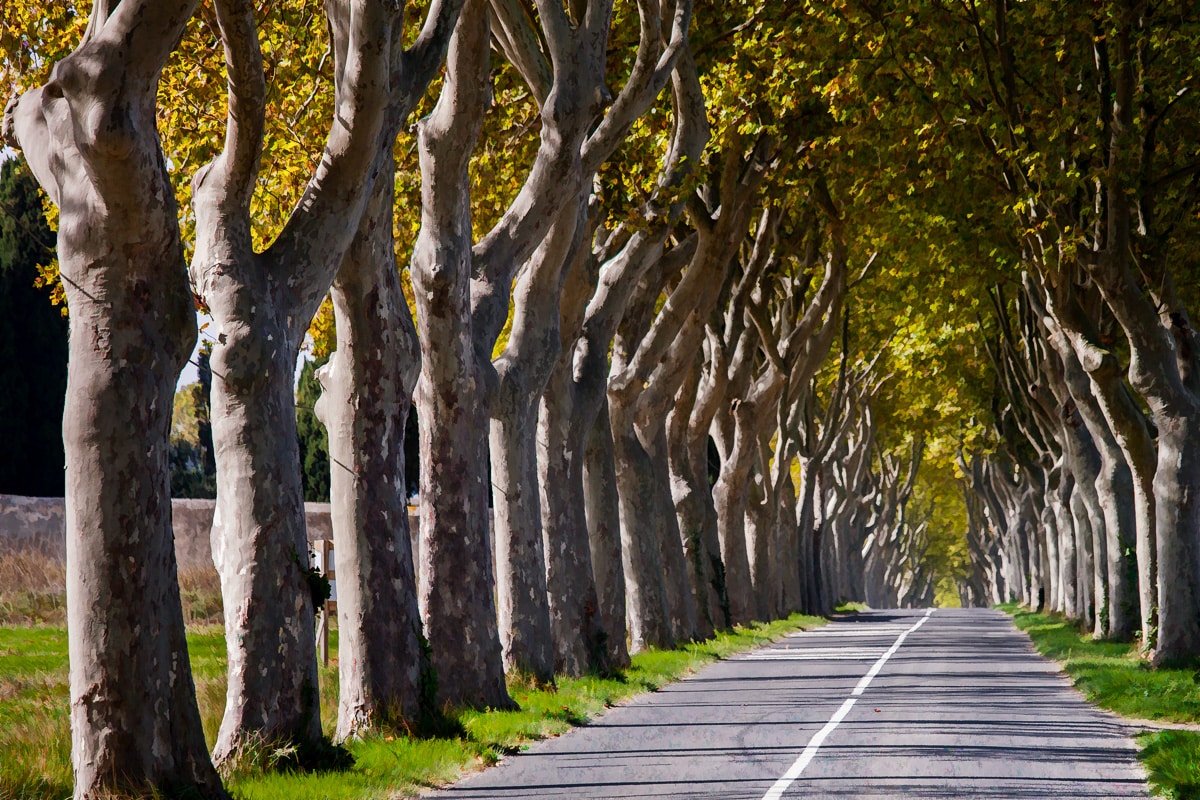 As we neared small villages, the road would be lined with very large Plane trees (a hybrid of the Asian and American sycamore trees created by accident in Oxford, England in the 16th century). Napoleon is apparently responsible for the tree lined roads. He ordered the extensive planting of plane trees along the roads in Southern France to shade his marching armies from the heat of the midday sun.

For us though, the trees made for grand entrance into even the smallest of villages. The light of the early autumn sun, now at a low angle even at midday, created a beautiful tunnel of color as we passed through on our way to the Abbaye Sainte-Marie de Lagrasse.

Turning off the main road we traveled up a small valley to the town of Lagrasse. Situated in the valley of the River Orbieu, at the foot of the Pyrenees, Lagrasse is considered one of Les Plus Beaux Villages de France (The most beautiful villages of France), and indeed it is.

We wandered the medieval streets of this charming village as we waited for the abbey to reopen (post-lunch 2:00). Lagrasse dates from the time the abbey was built. Permission for the construction was given by Charlemagne in 783. The 13th century fortifications and city walls are still present in places attesting the violent times the town has survived.

Admiring the small streets whose cobblestones had been worn smooth by centuries of feet and wheels, we glanced into the doors and windows of ancient shops now containing modern wares and crafts.

One of the most beautiful sights in Lagrasse is the Pont-Vieux de Lagrasse or Old Bridge. This 13th century stone, humpback, bridge is a thing a beauty. Now only carrying foot traffic, it spans the River Orbieu connecting the 14th century market to the abbey.

The oldest part of the abbey is the abbots house, including a small cloister whose columns’ capitals feature various scenes. The upper gallery leads to the abbey chapel, dating to the 13th century and its decorated walls. We continued through cellars and storerooms. vaulted rooms dimly lit by small windows, and then the wide dormitory, where the monks slept. Adjoining the structure stands a Pre-Romanesque tower, the oldest part of the abbey.

Though not as well preserved as Abbaye Fontfroid, Abbaye Lagrasse, as a whole, was beautiful and memorable.

As the day progressed we needed to move on to avoid any traffic getting in to Carcassonne. We stayed on smaller roads until we were almost in town, then we were both astounded when we saw the ancient medieval fortress of Carcassonne.