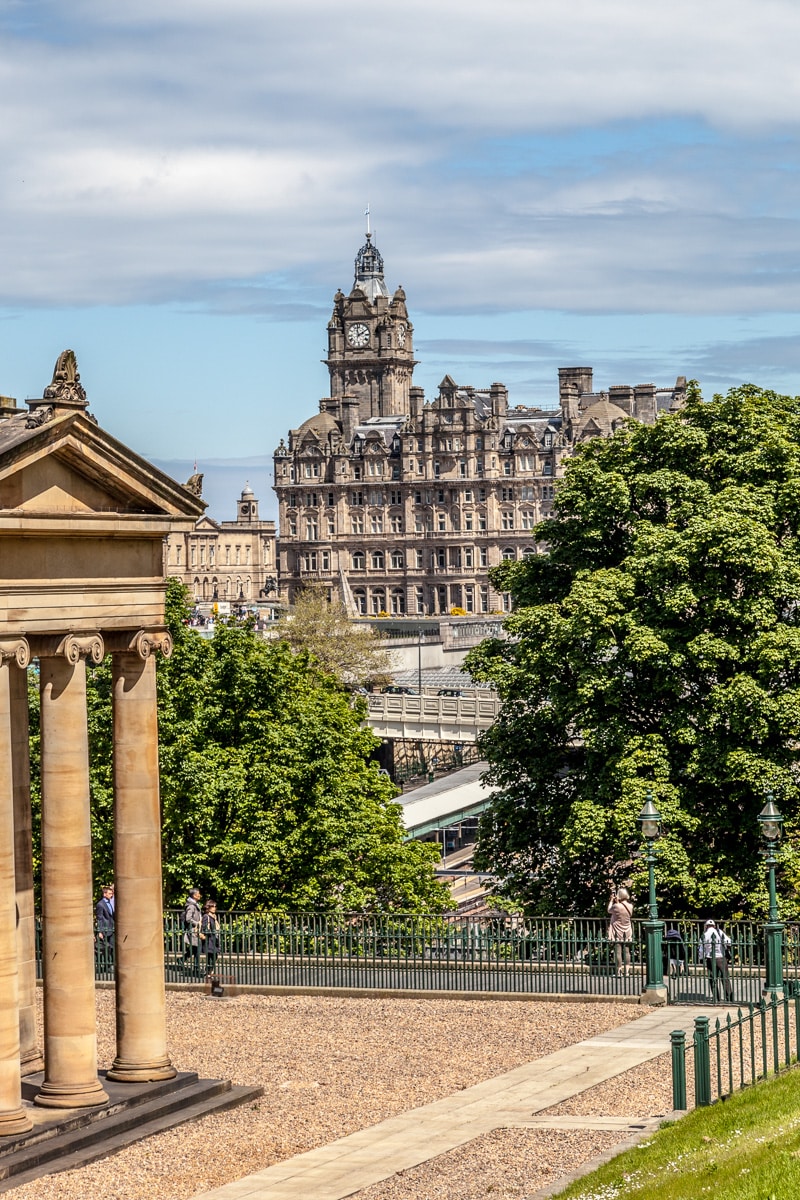 Who knew? Obviously, we didn’t:

Bagpipes, haggis and kilts – those were the main things I knew about Scotland, oh, and that movie Braveheart and Scotch. And I really didn’t know anything about haggis, and I don’t care for Scotch. And, come to think of it there’s also Sean Connery, and golf. So with all of that in our knowledgebase we took off for a month in Edinburgh. ~ Chris Fooshee, Bagpipes, Haggis and Kilts (written shortly after our arrival in Edinburgh)

It was so much better than we expected. And then you top it all off with a tour of a gin factory, Elton John, and a visit by Queen Elizabeth II. 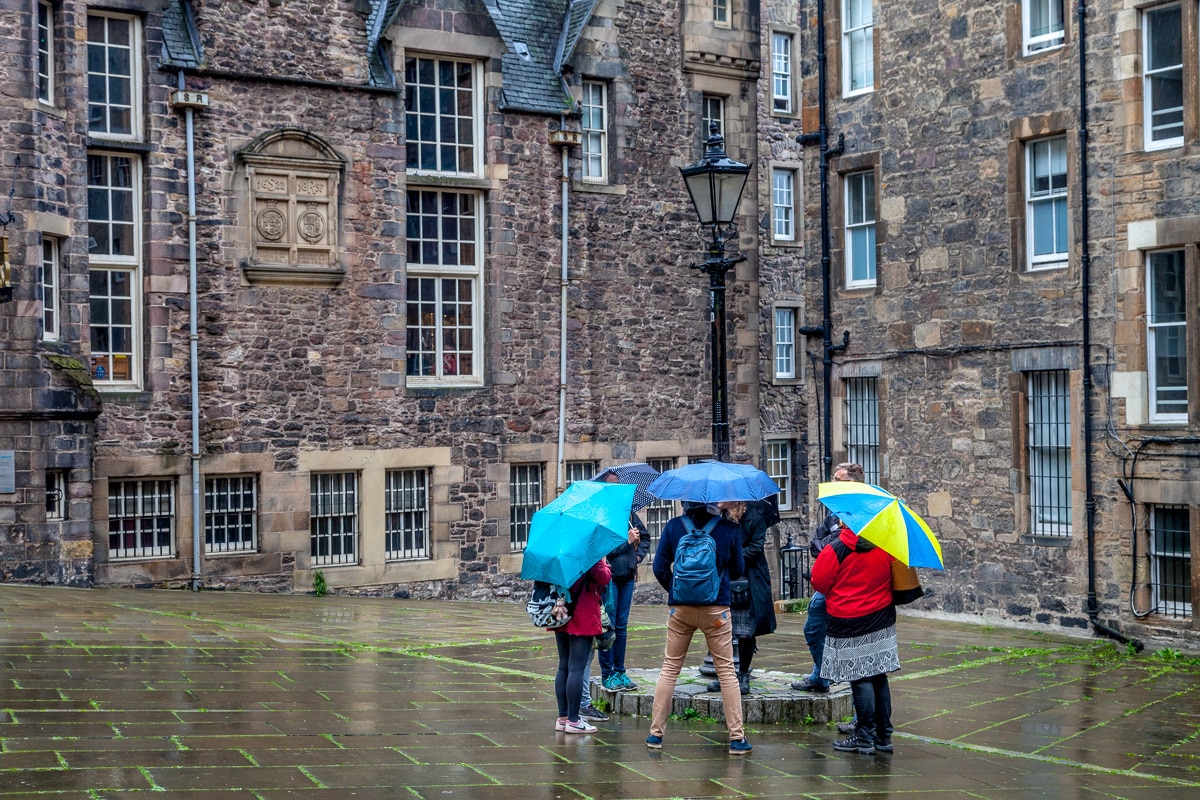 The Scots are a tough people. They have to be. The weather is generally considered terrible, but we found it to be rather tolerable except for the fact that it was necessary to always carry raingear, and wear layers as it is not unusual to experience four seasons in one day! It just wasn’t really BAD. 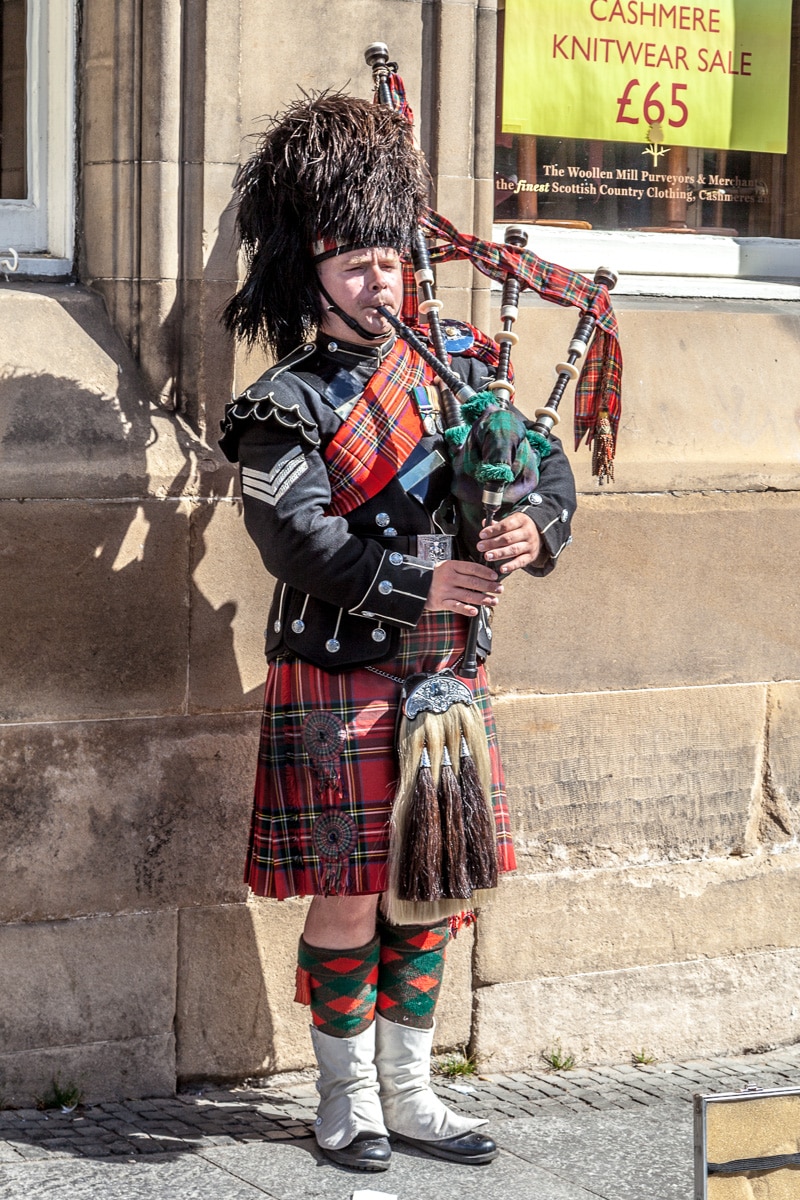 As for the bagpipes, when played well, they sound very … Scottish, and I mean that in a very positive way since I enjoyed hearing them.

However, not everyone is of the same opinion. Someone once said, “Let’s drink ‘til bagpipes sound good,”  which sounds like a good idea nonetheless.  Alfred Hitchcock, on the other hand, was quoted as saying “I understand the inventor of the bagpipes was inspired when he saw a man carrying an indignant, asthmatic pig under his arm. Unfortunately, the man-made sound never equaled the purity of the sound achieved by the pig.”  And famous golfer, Lee Trevino reportedly said, “Golf is a game invented by the same people who think music comes out of a bagpipe.”

I thought haggis was really good, so don’t remind me of the ingredients, or ask Jeannie her opinion!

Which brings us to: 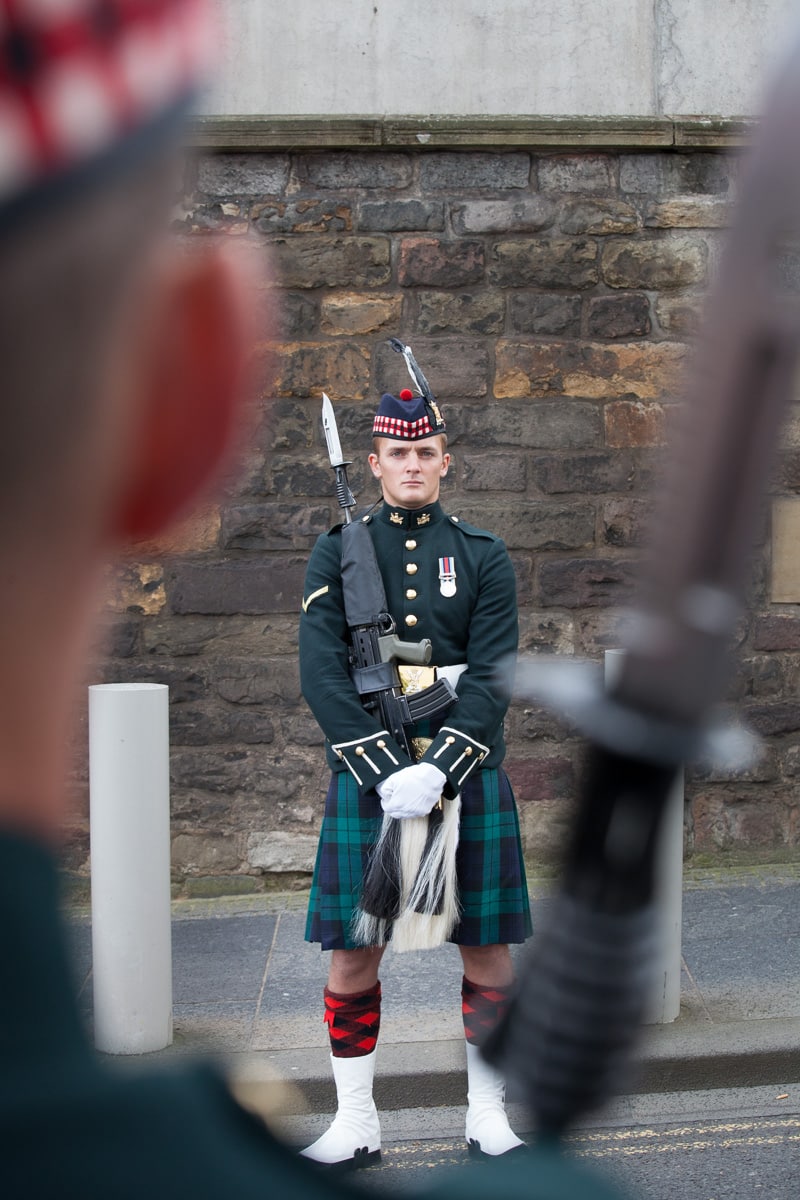 Kilts were historically confined to the Highlands. The great kilt, breacan or belted plaid came about during the 16th century. It was formed from a piece of tartan cloth some 2 yards (1.8 m) in width and up to 7 yards (6.4 m) in length. The upper part would then be worn as a cloak draped over the shoulder, or brought up over the head as a hood.

The kilt had several advantages in the harsh climate and terrain of the Highlands.  It allowed freedom of movement, it was warm, the upper half could provide a voluminous cloak against the weather, it dried out quickly, and at night, it could serve as a bedroll.

When complete freedom of action was required in battle it was easily discarded. In a Scottish clan battle that took place in 1544, the day was so hot that both sides threw off their plaids, fighting only in their shirts. The battle was thereafter known as “Field of the Shirts”. 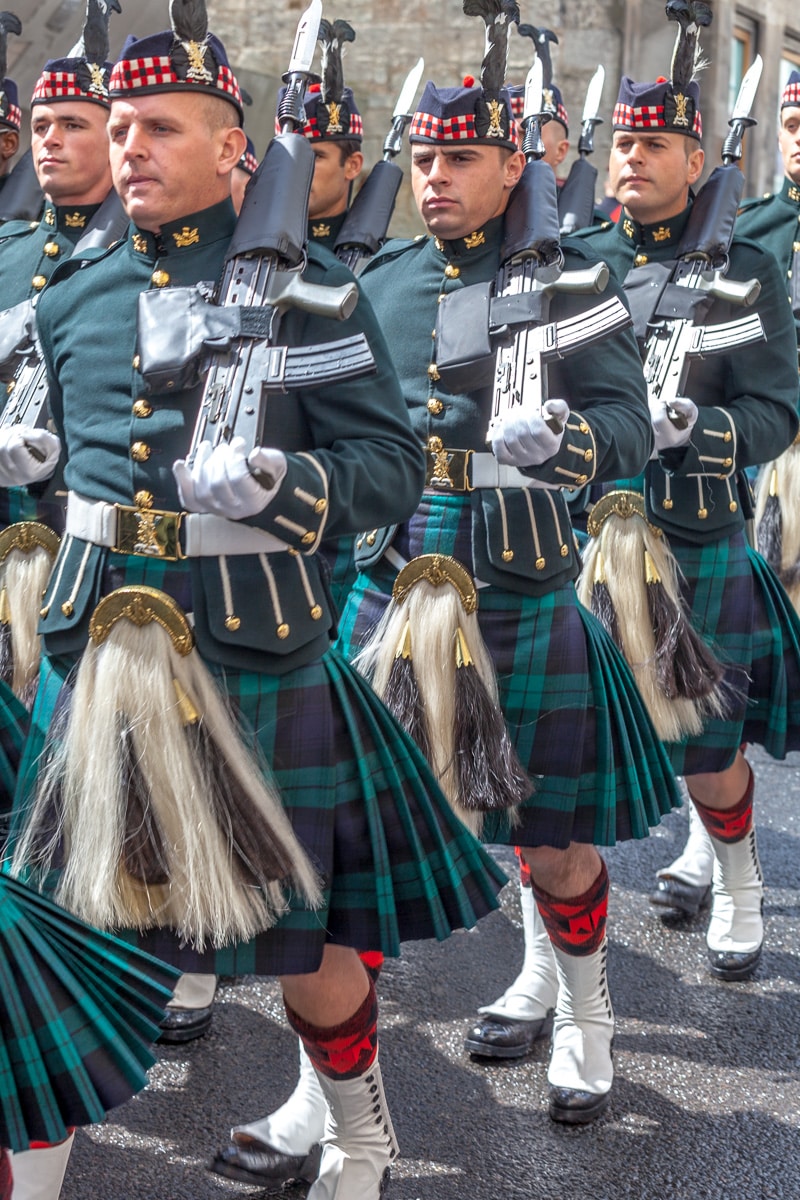 Vikings, well known for being fierce warriors, described Scotland as an unwelcome and inhospitable country offering rewards only to the bold.  Thirteenth-century chronicles warned that “Icelanders who want to practise robbery are advised to go there,” says one saga. “But it may cost them their life.”

The British government had no doubts on the matter when, after the defeat of Bonnie Prince Charlie, at the Battle of Culloden on 16 April 1746 , they totally banned the wearing of kilts and the tartan. 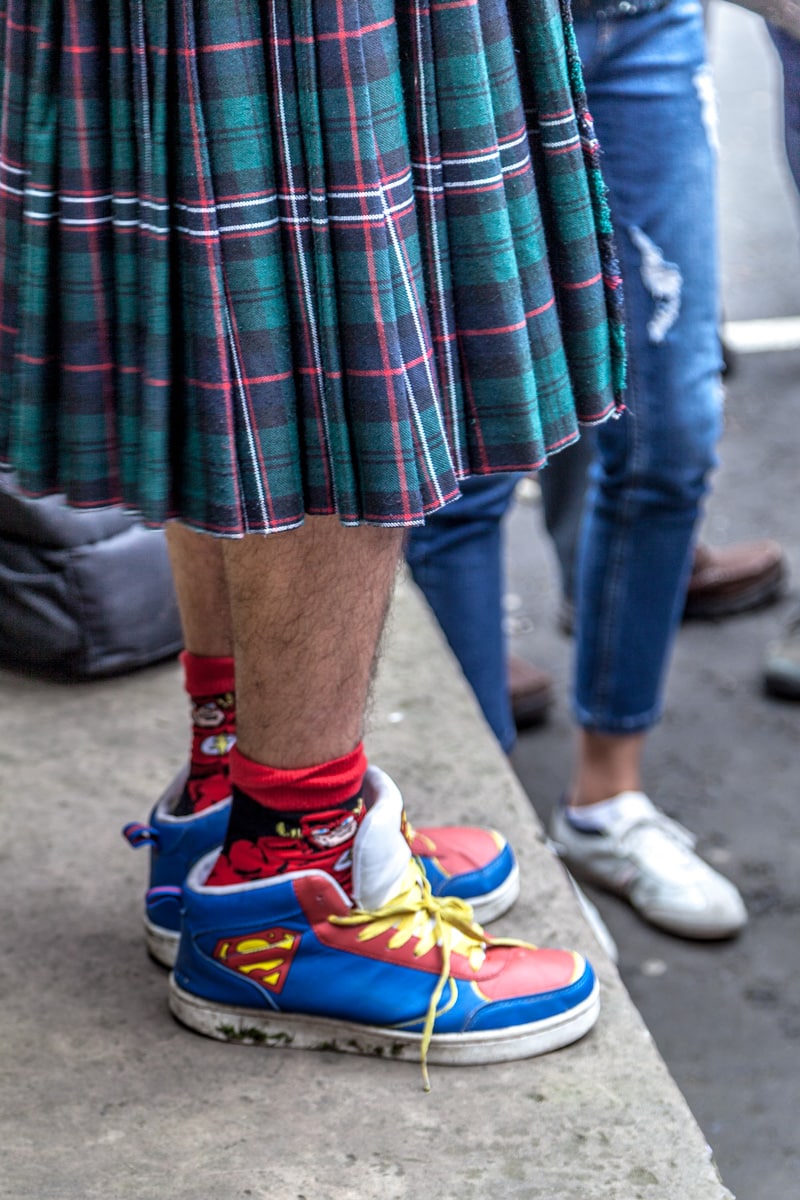 During the First World War, Scottish units that wore the kilt in combat fought so ferociously that they were given the nickname “Ladies from Hell” by the German troops they faced in the trenches.

Though some may chortle on seeing Scottish men wearing the kilt, it would be wise to remember the history and reputation of those that wear the tartan, even those that do so lightheartedly.

So, it is here that our adventure in Edinburgh ends. I still don’t  care for Scotch, we didn’t see Sean Connery, and the Scottish weren’t all that impressed with the movie Braveheart because it was VERY loose with history. And though Jeannie often said, “Edinburgh DESERVES better weather”, we survived and had a great experience.