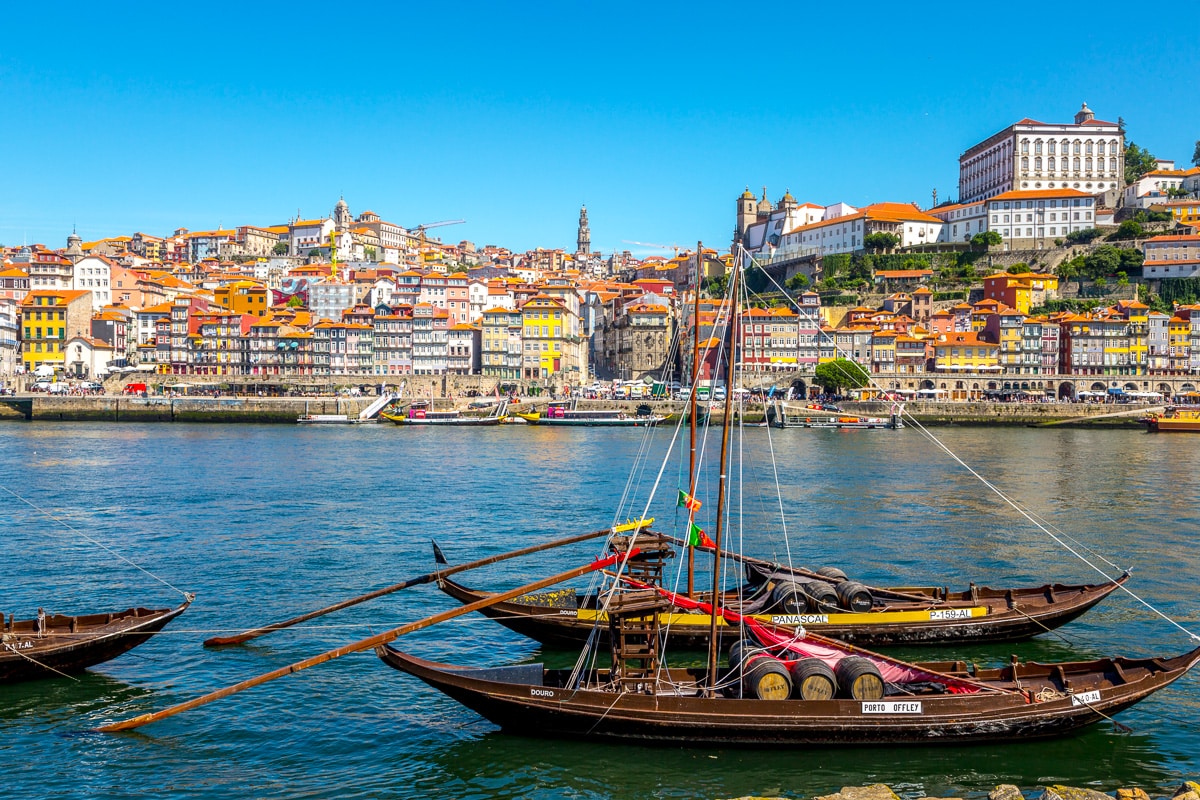 The Douro River flows to the Atlantic 897 km (557 mi) from its origins high in the mountains in Spain. It passes by Porto only about 5 km (3 mi) from the ocean. But Porto is on the north side of the river, and on the other side is the city of Vila Nova de Gaia.

During Roman times, Gaia was known as Cale, or Portus Cale, (i.e. Port of Cale — the origins of the name of Portugal), and was situated on the banks of the Douro River where today Porto and Vila Nova de Gaia are located. 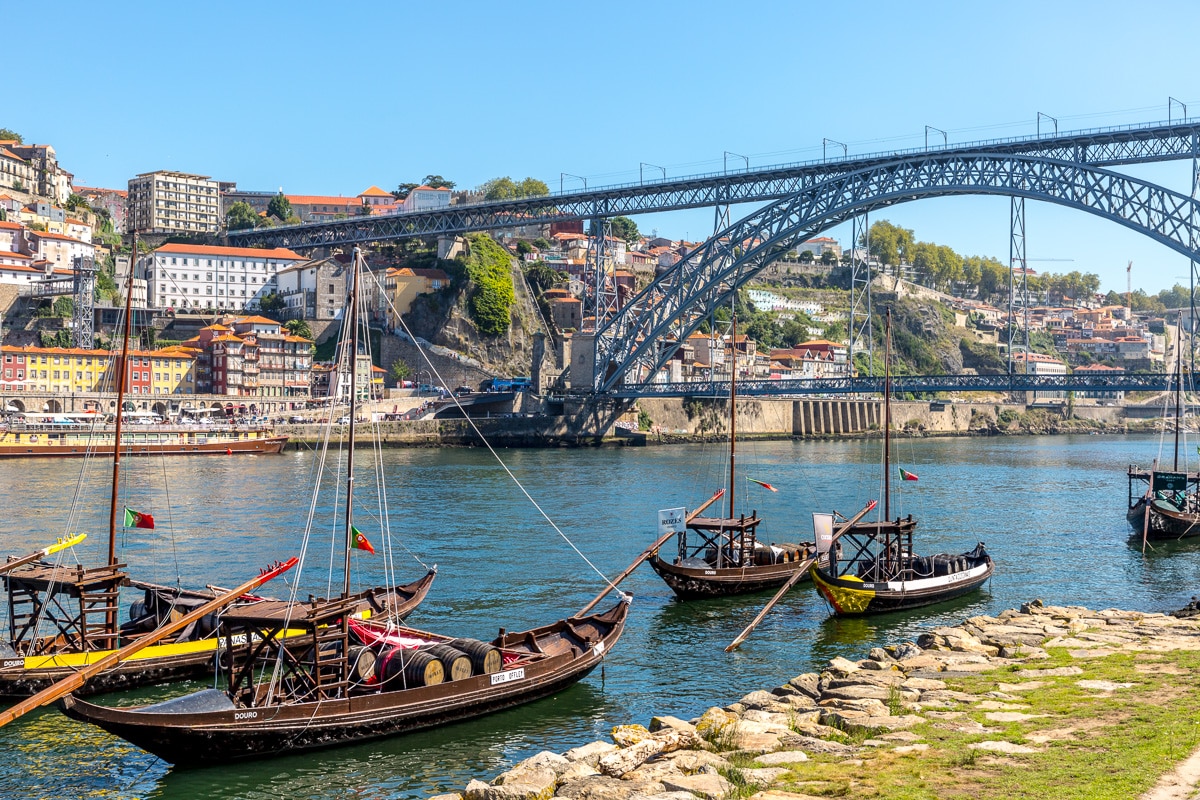 In the 5th and 6th centuries, the region was invaded by Germanic peoples, who took control from the Romans and made the city now known as Braga further to the north, their capital. In 584 AD the Visigoths invaded and renamed the settlement at Porto, Portucale. Then, control of the region changed once again in 711 with the Moorish invasion of most of the Iberian Peninsula.

In 868 a Christian warlord from Galicia overthrew the Moors, taking control of the region from the Douro River to the Minho River in the North, where he established the first County of Portugal (Condado de Portucale). 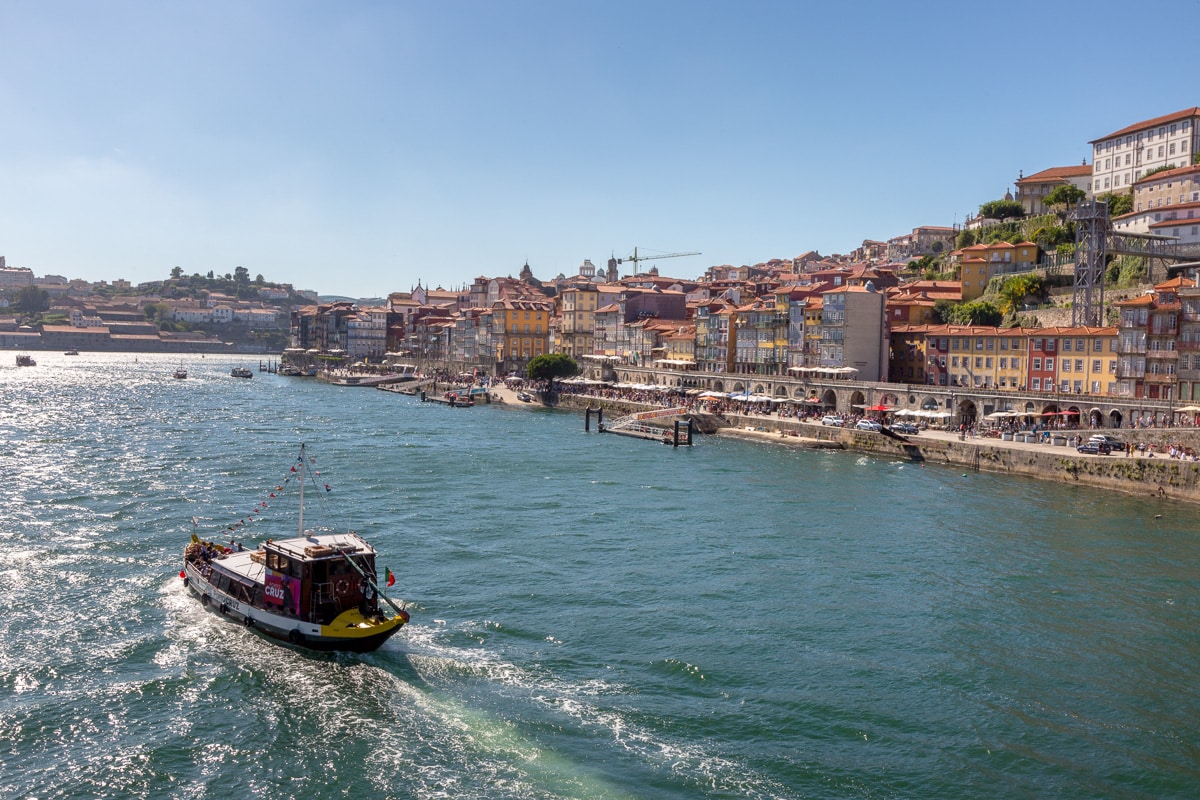 In 1386, King John I of Portugal married the daughter of the English first Duke of Lancaster, forming an alliance between England and Portugal, the oldest military pact between any two countries in the world.

Because of the deep waters of the Douro River, Porto/Gaia was crucial in the 14th and 15th centuries in the development of Portuguese shipbuilding, and it was here from which Henry the Navigator set sail in 1415 to explore the western coast of Africa, initiating the Portuguese Age of Discovery.

By the 1700s, wine was an important part of the economy and contributed to Porto’s growth. Boats known as barcos rebelos transported barrels of wine down the Douro River from the vineyards of the Douro Valley, and by 1717 the first English trading post for Port wine was already operating out of Porto.

The 18th and 19th centuries were a period of continued growth in the history of Porto. The period was not without conflict however. Napoleonic troops invaded in 1809, and the population attempted to escape across a pontoon bridge, Ponte das Barcas, which collapsed under the weight. Fortunately, the French were defeated by the British troops who commandeered wine barges to cross the river from the banks of Vila Nova de Gaia. 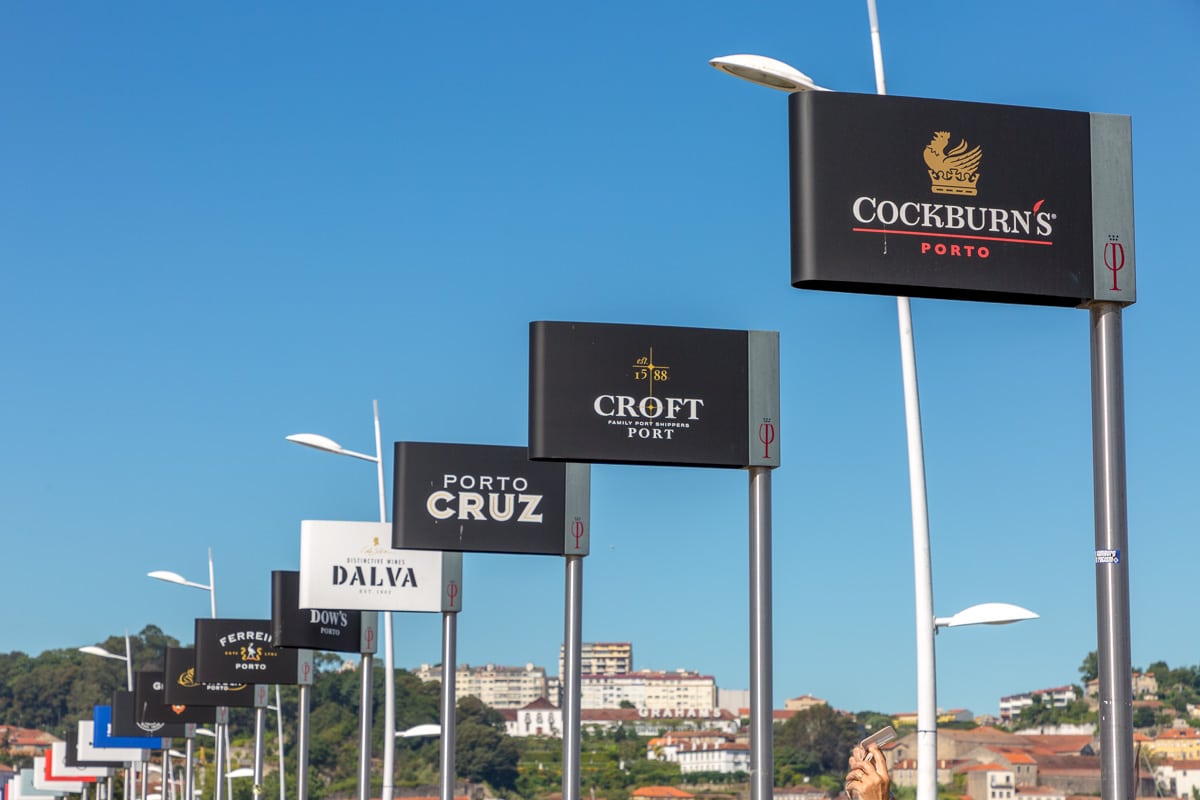 Gaia is the center of Port wine production. The wine is grown and produced along the inland slopes of the Douro River, then transported to Vila Nova de Gaia to be stored and aged, often in barrels stored in a Lodge (meaning “cellar” or “cave”), before being bottled.

The important factor in the production of Port is that during the process, a neutral brandy with a high alcohol content is introduced to stop the fermentation; this prevents the natural conversion of sugars to alcohol resulting in a sweeter wine and boosts the alcohol content to 19% – 20%.

The area of Vila Nova de Gaia nearest the river is lined with the major Porto producers, and (for a price) most all offer tastings, usually combined with a tour. There is a large street market, as well as an indoor market. And, as August is the major season for tourists, the crowds were impressive. 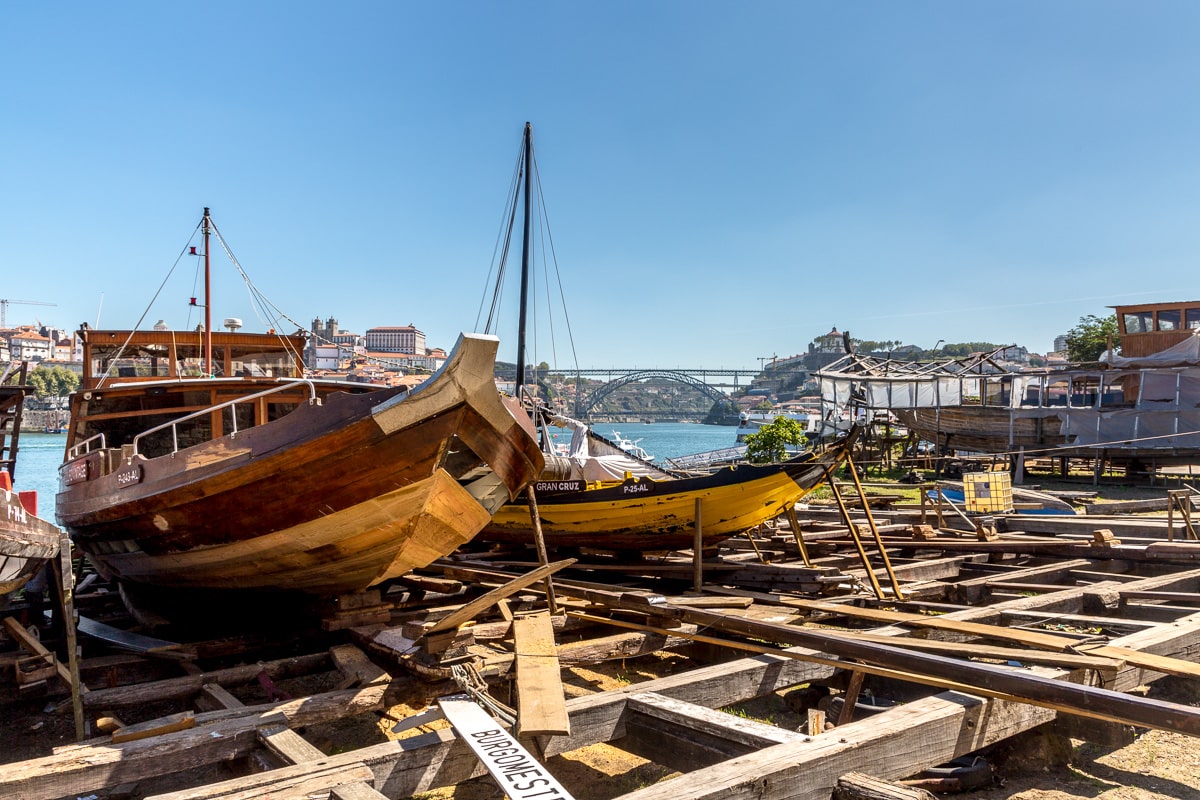 It was too early for a Port tasting, so we stopped by the tourist information center for some ideas. As it turned out, there is a promenade that follows the river 5 km (3 mi), all the way to the mouth of the Douro. And a free shuttle service could take us to the beach and south along the coast for more than 17 km (10 mi) and then back to Gaia.

As we walked along the river, we passed a boatyard where repairs were being made to some of the rabelo boats, traditional Portuguese wooden cargo craft used for centuries to transport people and goods along the Douro River. 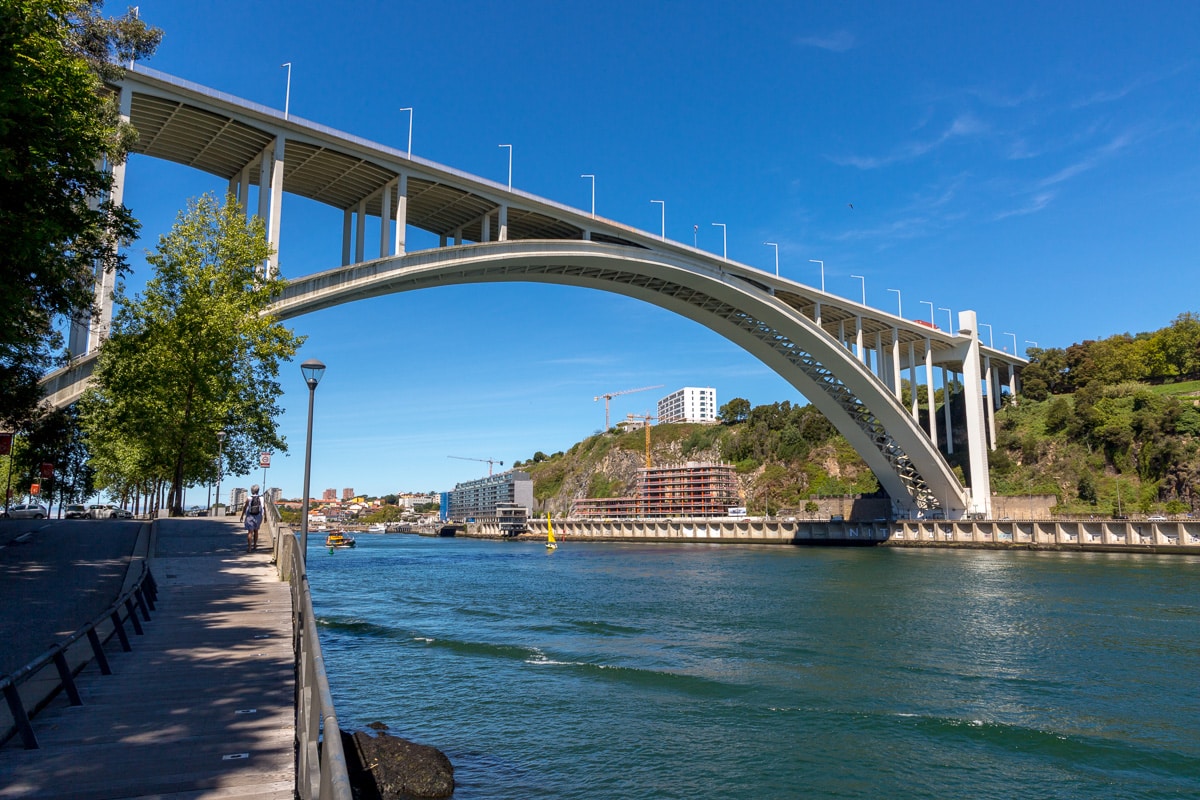 The decking of the promenade was made of wood and in many places was suspended out over the water. Fishermen had their lines far out into the river from long casting rods placed into stainless steel holders embedded in the decking.

We knew we were getting close to the coast as we passed under the Ponte da Arrábida. At 493.2 metres (1,618 ft) long, and 70 metres (230 ft) high, this landmark arch bridge, completed in 1963 over the Douro River, is a modern architectural beauty.

Walking into the seaside neighborhood of São Pedro da Afurada, the vibe became much more beach-like, even though we were still just over 1.6 km (1 mi) away from the ocean. We stopped at a small park near the marina to eat the sandwiches we had purchased earlier, then went in search of the shuttle we were told about. 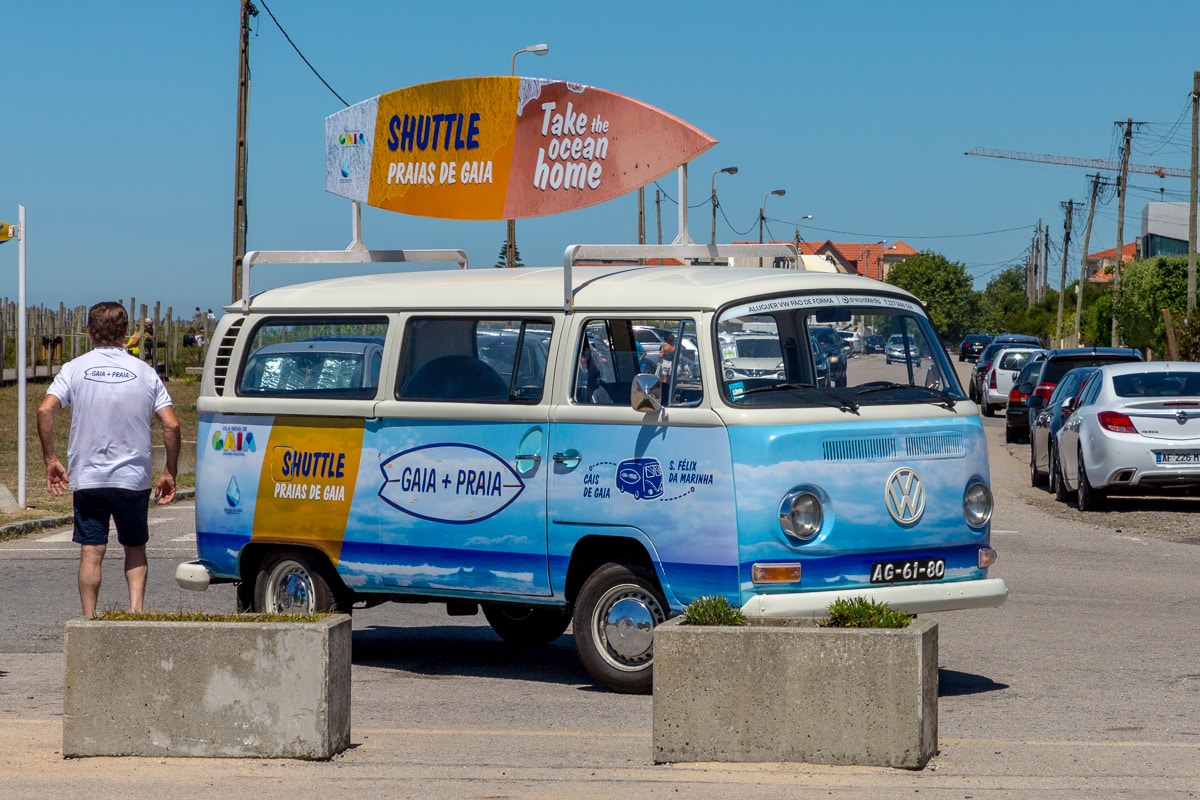 We knew what to look for, because the shuttles were all restored classic VW buses. Of course, it must be said that back in our younger years we had twice owned a camper version of these venerable vehicles and had many memorable road trips in them.

The wait was short, and the shuttle pulled up with four other passengers. We piled into the back bench seat, and off we went. We quickly discovered that the other riders weren’t Portuguese, but a family of four from Barcelona, and fortunately they could all speak English. We were all going to the end of the line and we began to get acquainted. 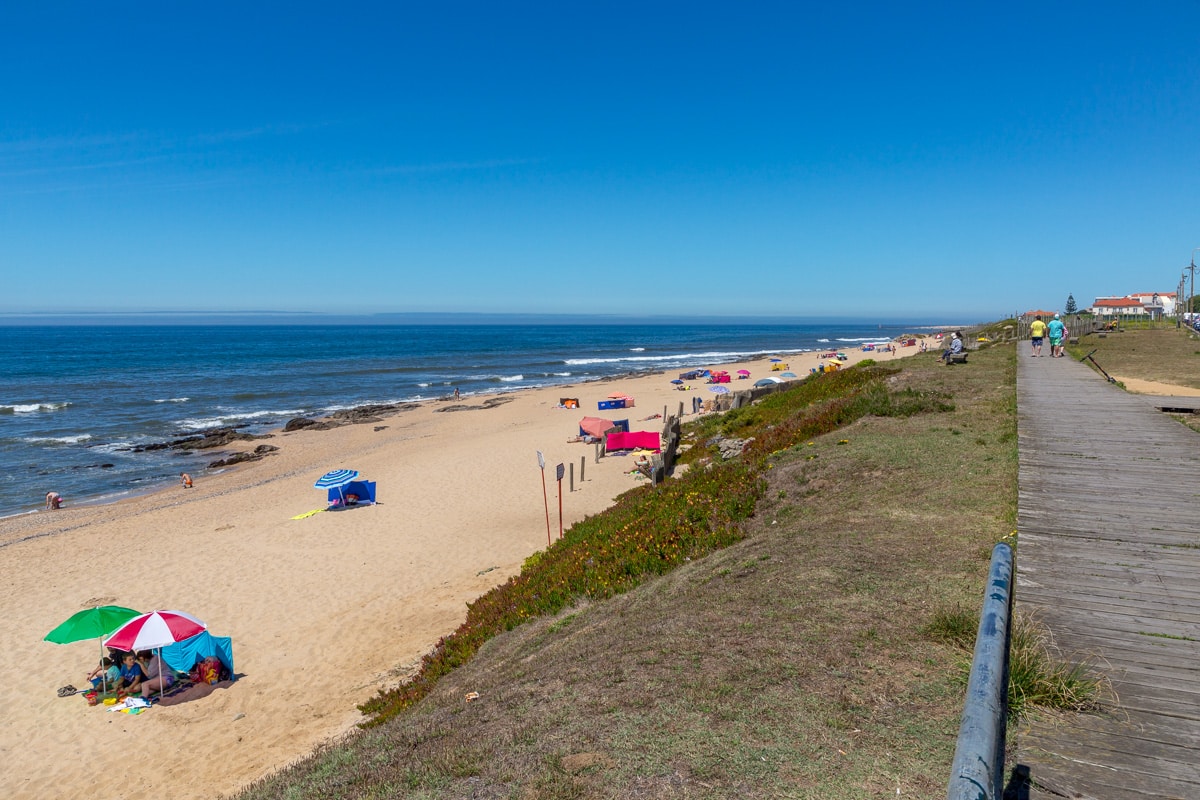 The drive along the coast was like going through most beach communities. Sand dunes, boardwalks, restaurants, bars and cafes, and high-rise buildings competed for space. Unlike many beach towns in Florida and elsewhere in the US, there was less development on the beach-side of the road.

Reaching the end of the shuttle ride along the beach, we all left the bus to visit the beach, before catching the next shuttle back to Gaia. We said our goodbyes to the charming Spanish family, and they went off, removing their shoes and walking barefoot down to the water, while we opted to walk the boardwalk that seemed to extend far off in both directions. As a side note, it was quite chilly along the Atlantic, and there was a brisk breeze; people lying in the sun had even brought portable windbreaks to shield them from the wind. 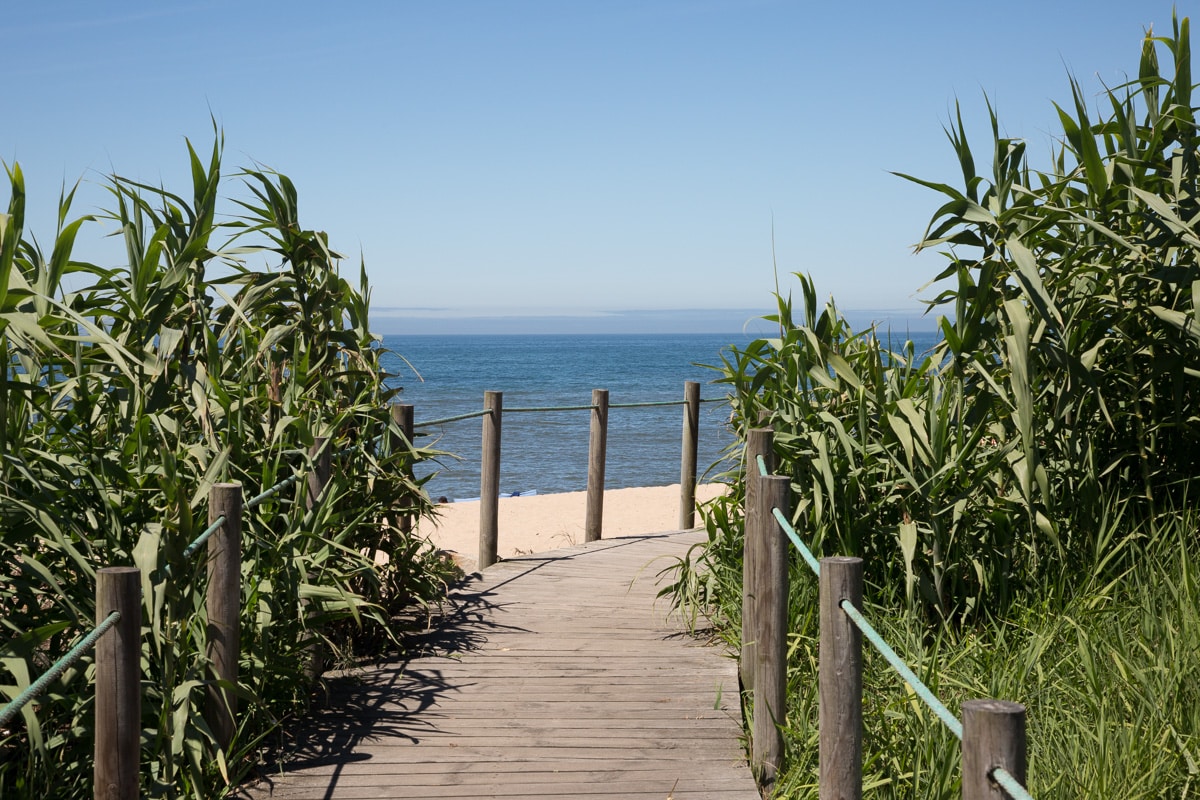 After a nice stroll, we returned to the shuttle pickup point, where the Spanish family — Tony, Christina, son Tony and daughter Martina — also showed up, along with three others. The open-top shuttle arrived quite late, and when it did we all questioned if 1) we could get nine passengers inside, and 2) if the VW could make it with that much weight. But no worries, it was snug but everyone was friendly, and there were some wonderful 3-language exchanges from Portuguese-to-Spanish-to-English and back. 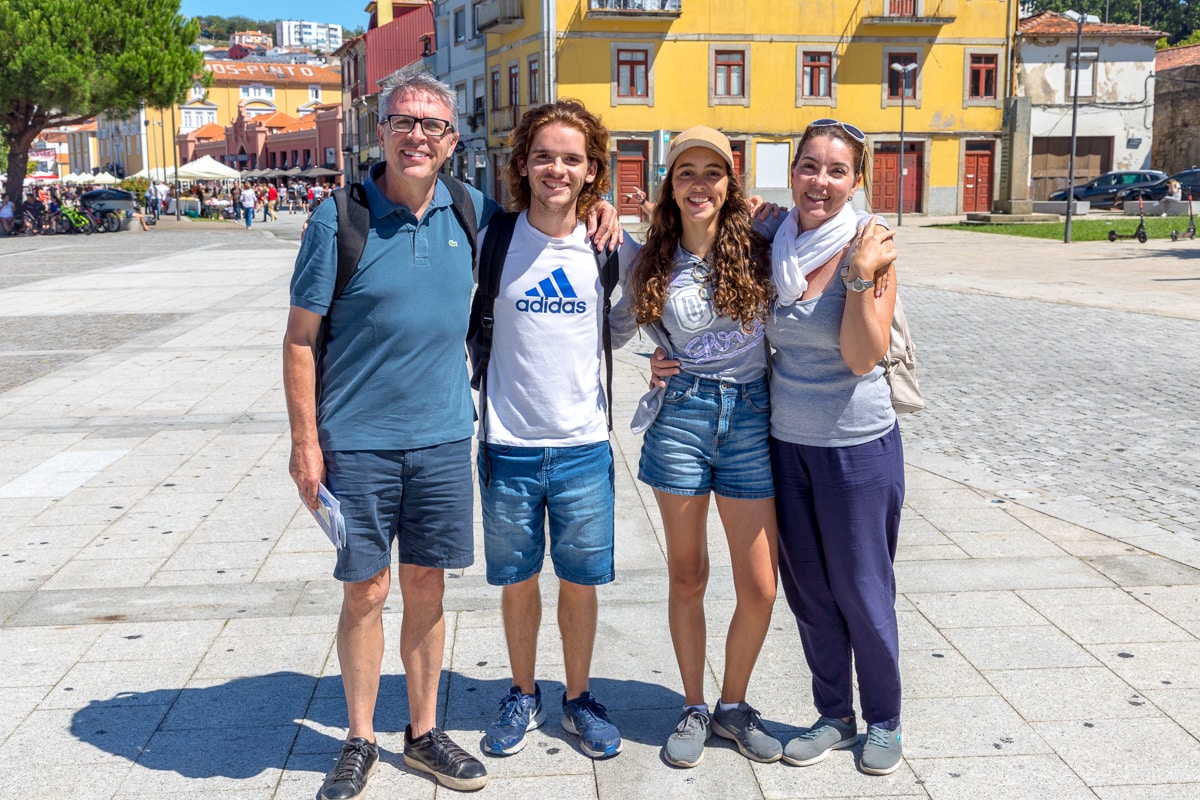 It was a pleasant journey back, and warm goodbyes were offered all around as we went our separate ways.

Wandering further still, we finally stopped for a mixed tray of ham/sausage and cheese, and wine. Sufficiently reenergized, we walked back across lower section of the Ponte Luís I bridge, stopping briefly to watch several kids jumping the 15 m (50 ft) into river below.

As we made our way along the final couple of miles home, we paused at the grocery store for some items for dinner. After a good home cooked meal and some wine, we turned in, dreaming of road trips to the beach in a VW van listening to CNS&Y on an 8-track. Ahhh.