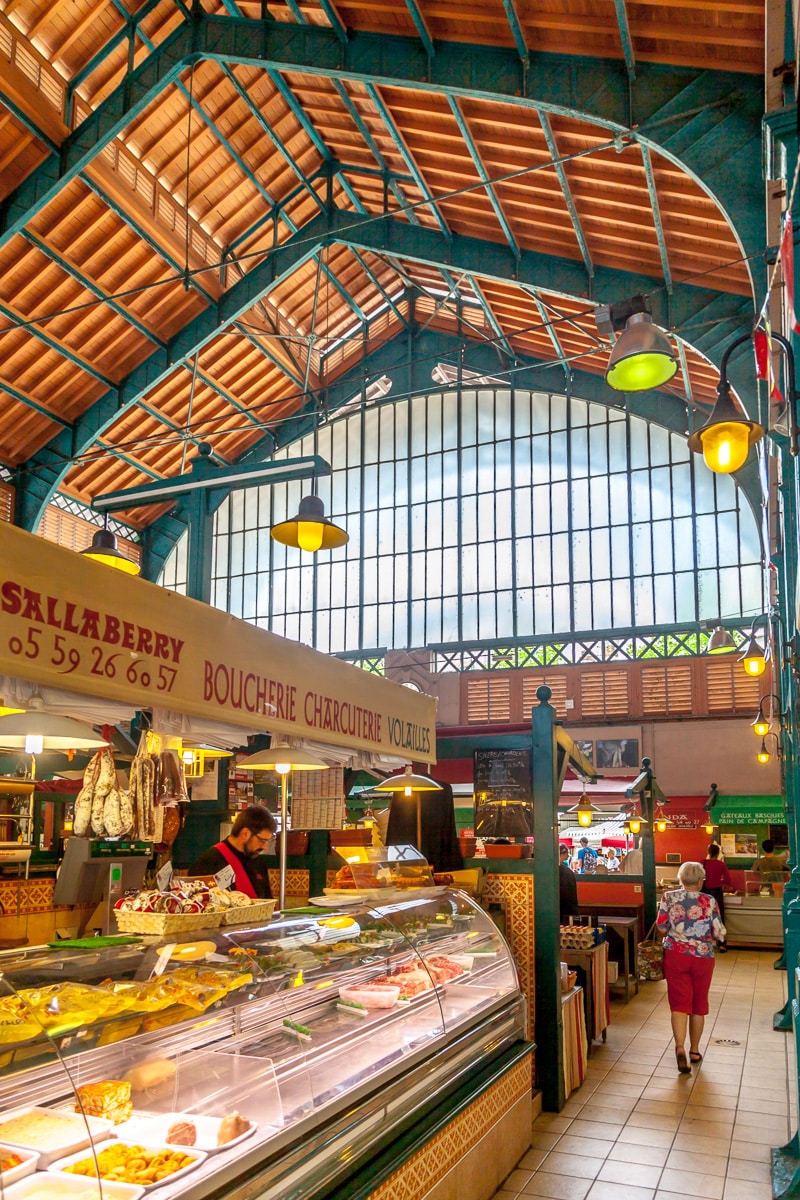 , 18 km (12 mi) south of Biarritz and very close to the Spanish border, is a well-protected port that reached its height during the 17th century when it was called the “Viper’s Nest” by English sailors, a reference to the Basque pirates that used it as a home base.

We arrived in time for lunch, but did a circuit of the market before going to the restaurant just across the street. The market was similar to many others but with a noticeable Basque feeling. Of course there were the fish mongers, meat vendors, and fruit and vegetable stands, but looking more closely there were a wide range of especially interesting fish and seafood, as were the Basque green peppers (they use lots of peppers), onions, garlic and tomato and other local varieties. At one cheese stand we were offered tastes of some local Basque cheeses that were simply delicious. 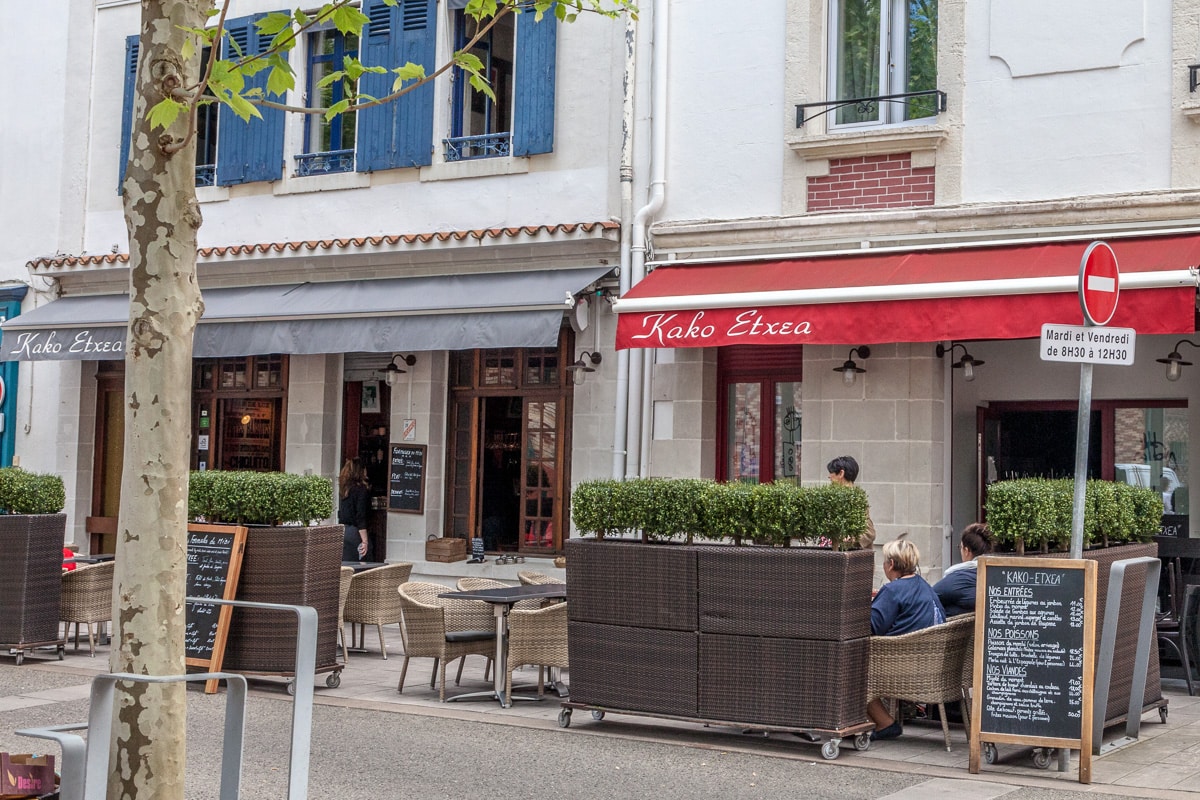 But I digress, and we were now ready for a good lunch at Kako Etxea a Bistrot Basque. Jeannie had fish and veggies that were wonderful, and I don’t remember what I had but do know that it was deliciously different. After the obligatory dessert and espresso, we took off for a walking tour of the city. 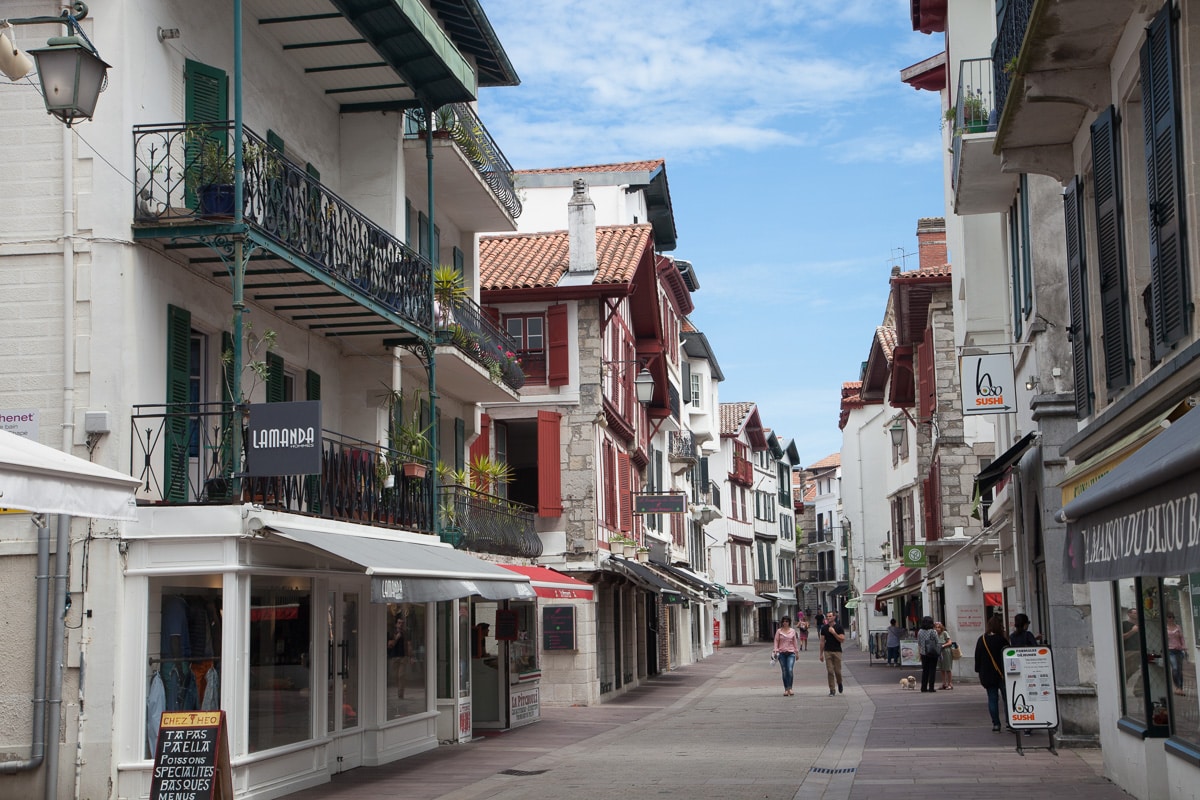 The port and its surrounding town is several centuries old, and has been relatively well preserved. Though suffering the ravages of rampant tourism and its gift-shop mentality, it is possible to look beyond the t-shirt shops, baubles, and souvenirs. The back streets and alleys still echo the past, and the bones of some of the old buildings can still be seen, unpainted and showing their well-earned age. 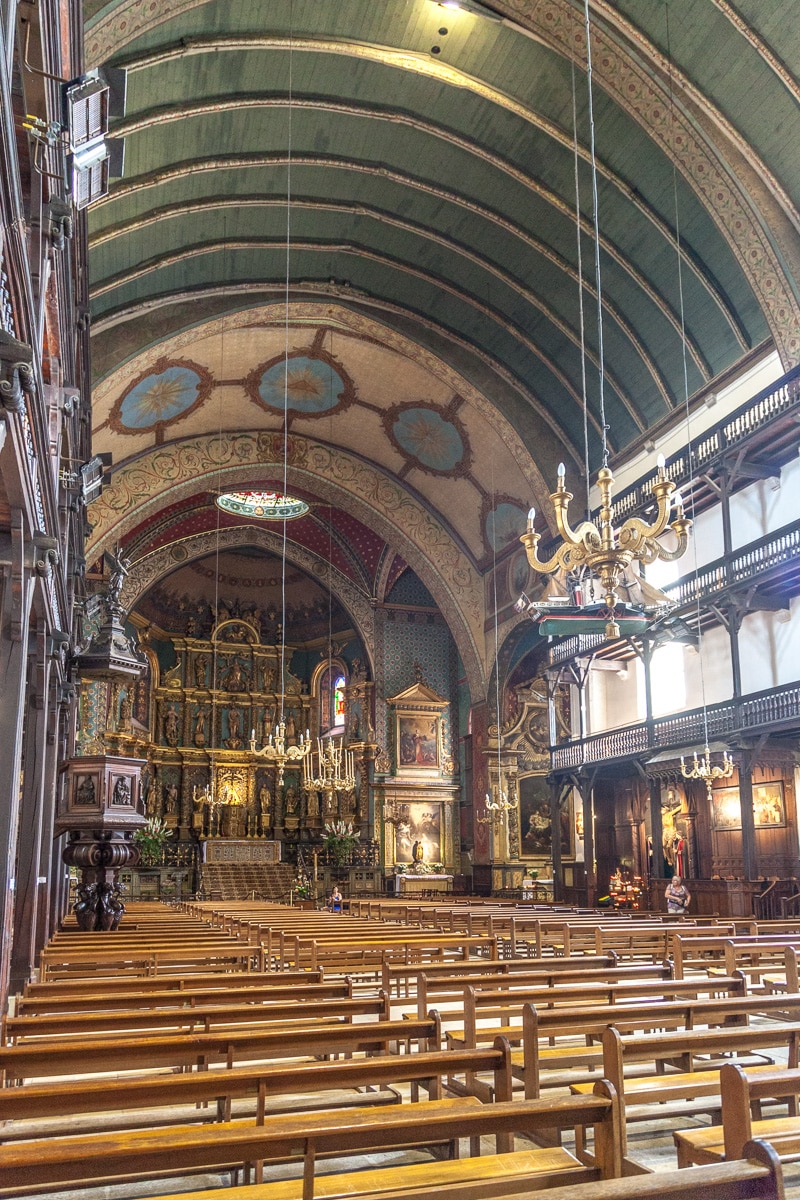 One of the more fascinating buildings is the Église Saint-Jean-Baptiste, the largest Basque church in France. It was the site of the marriage in 1660 of Louis XIV and the Spanish princess Maria Teresa, an arranged political marriage that brought an end to a bitter war between France and Spain. It is said that the church remains as beautiful today as on the royal couple’s wedding day, its vast wood interior and galleries are a mixture of Renaissance style with traditional Basque motifs. 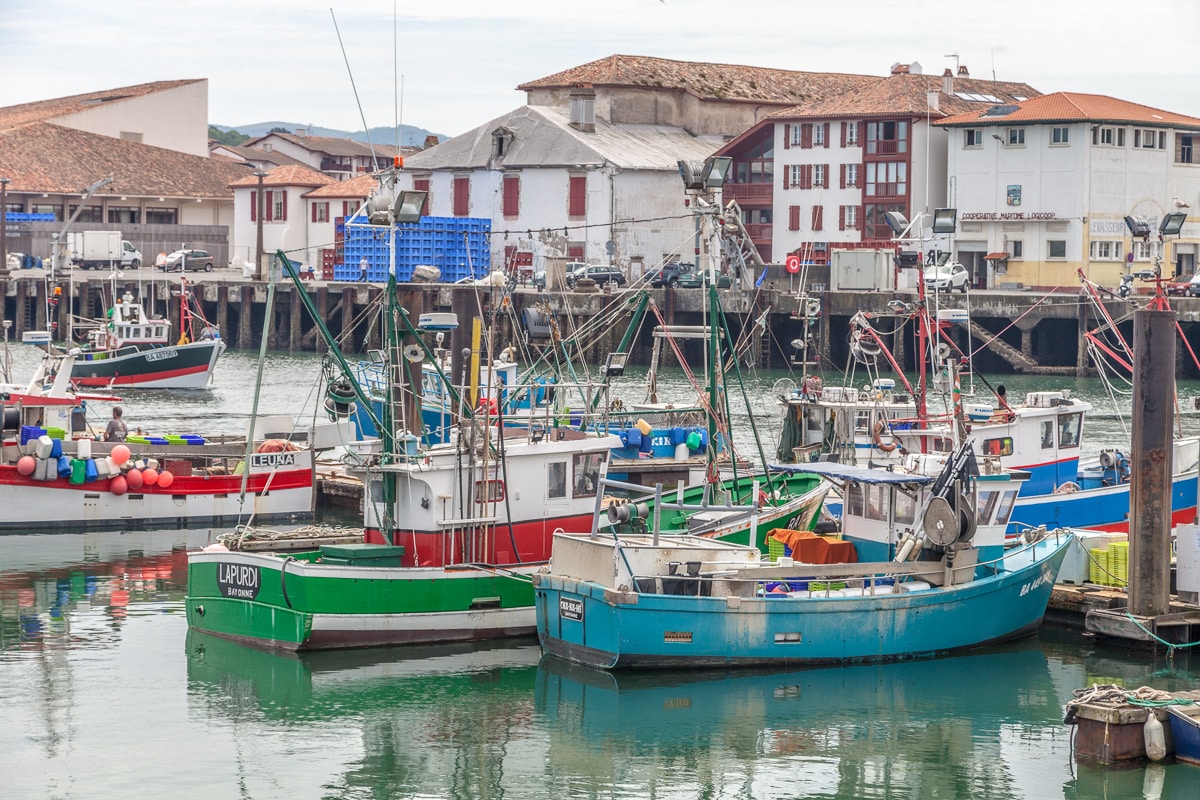 Our wanderings continued down the cobbled streets to the harbor where working fishing boats and pleasure craft were tied up or at anchor. We paused at a monument on the Quai L’Infante dedicated to the resistance movement commemorating the work of French escape networks which helped people evade capture during World War II. 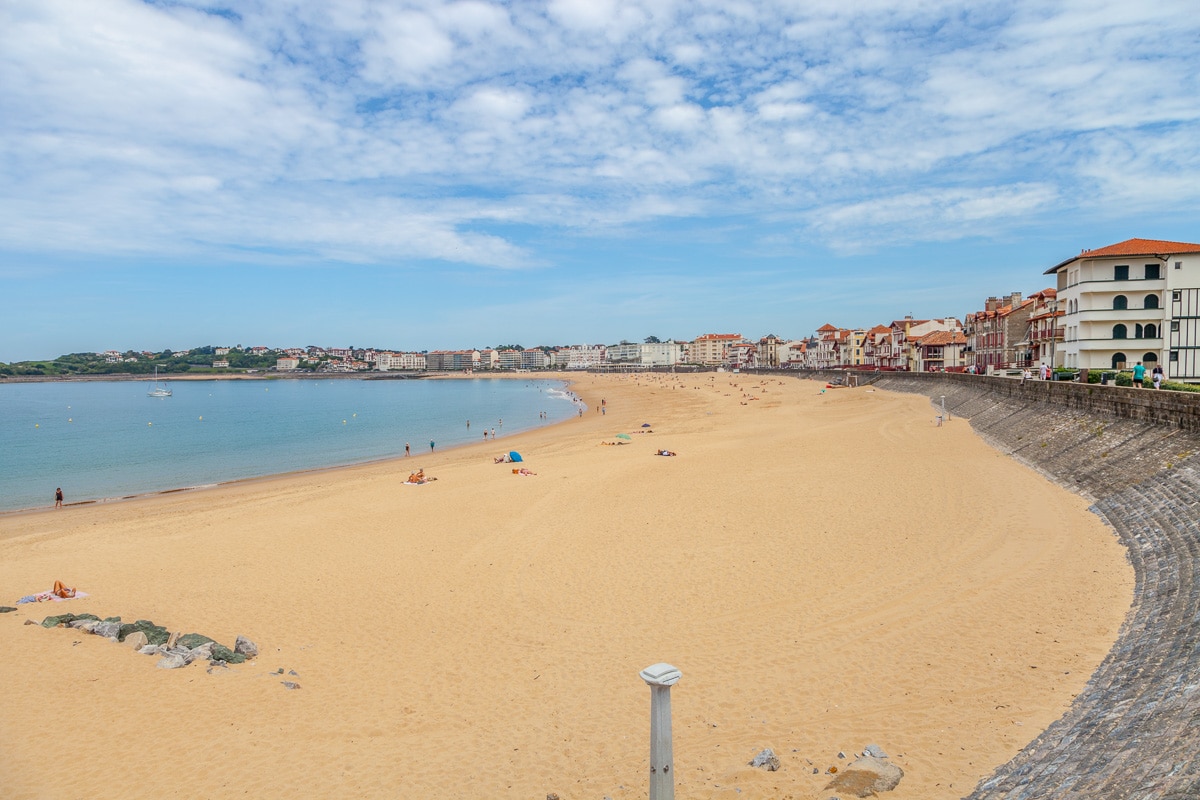 The atmosphere in St Jean de Luz is completely different, more relaxed, and beautiful yet not overly lavish. We embraced this relaxed attitude as we climbed the stairs to the promenade along the wide sandy beach. The throngs of beach-goers will not arrive until July-August, filling the hotels, restaurants, sandy shore to overflowing.

For us, however it was time to return to Biarritz, but only after a brief stop in Guéthary. One of the lovely young staff at our hotel had urged us to stop there (it is where her parents live), and it was another recommendation that was especially worthwhile. After a bit of exploring this tiny beach town, we enjoyed a refreshing drink as we relaxed overlooking the blue Atlantic. 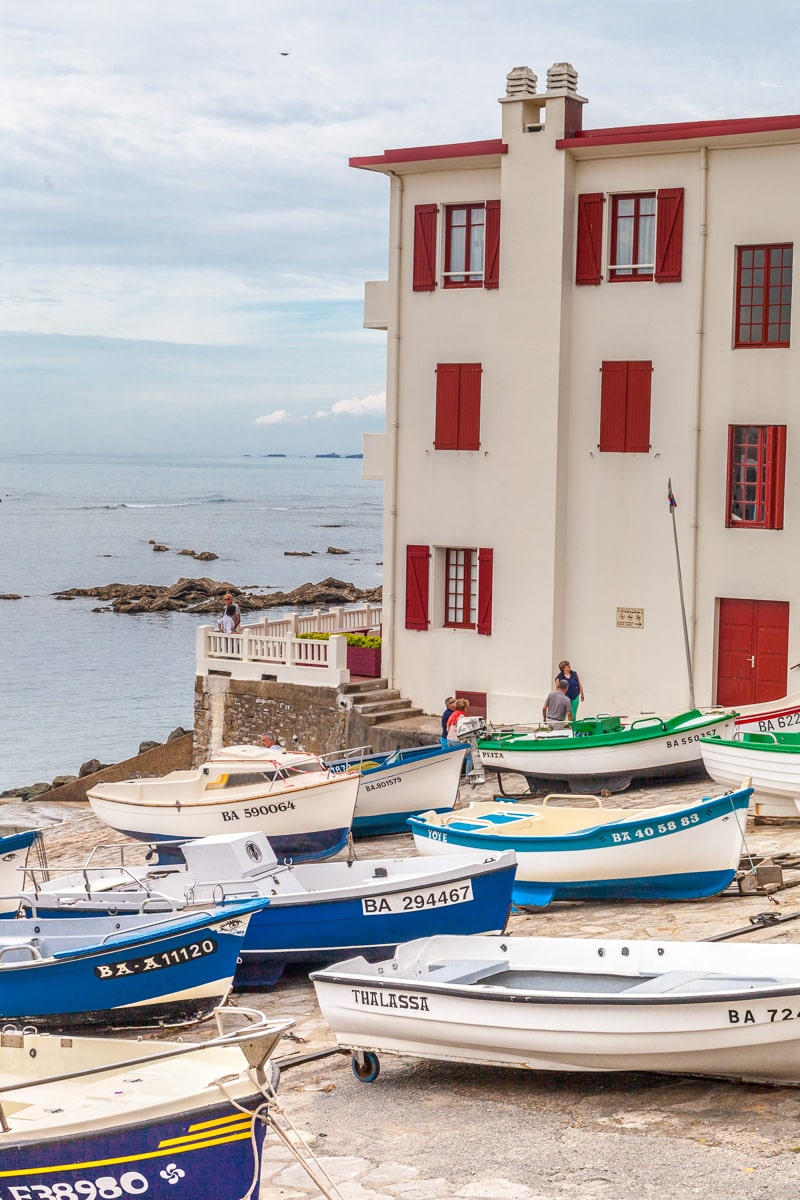 Guéthary has been a small fishing village since the early 12th century and became famous for hunting whales in the 13th century. Just at the border with Spain, this is Basque country. As we passed the mairie or city hall, we noticed the large pelota (similar to the game Jai alai) court or fronton, where later there was a group of local men gathering with their cestas for an afternoon game.

But, again, it was time to get back on the road, and soon we were back at our hotel and preparing for dinner. Since we had already eaten a substantial lunch in Saint-Jean-de-Luz, we decided to opt for wine and pintxos, the Basque version of tapas.

We discovered a small place – Puig & Daro, not far from our hotel and after being seated at a centrally located, small table, we settled in for just under three-hours of Basque jambon (ham), fromage (cheese), pain (bread), and a delicious bottle of vin rouge (red wine). The people-watching was great fun, and it served as a wonderful end to our short stay in Biarritz. 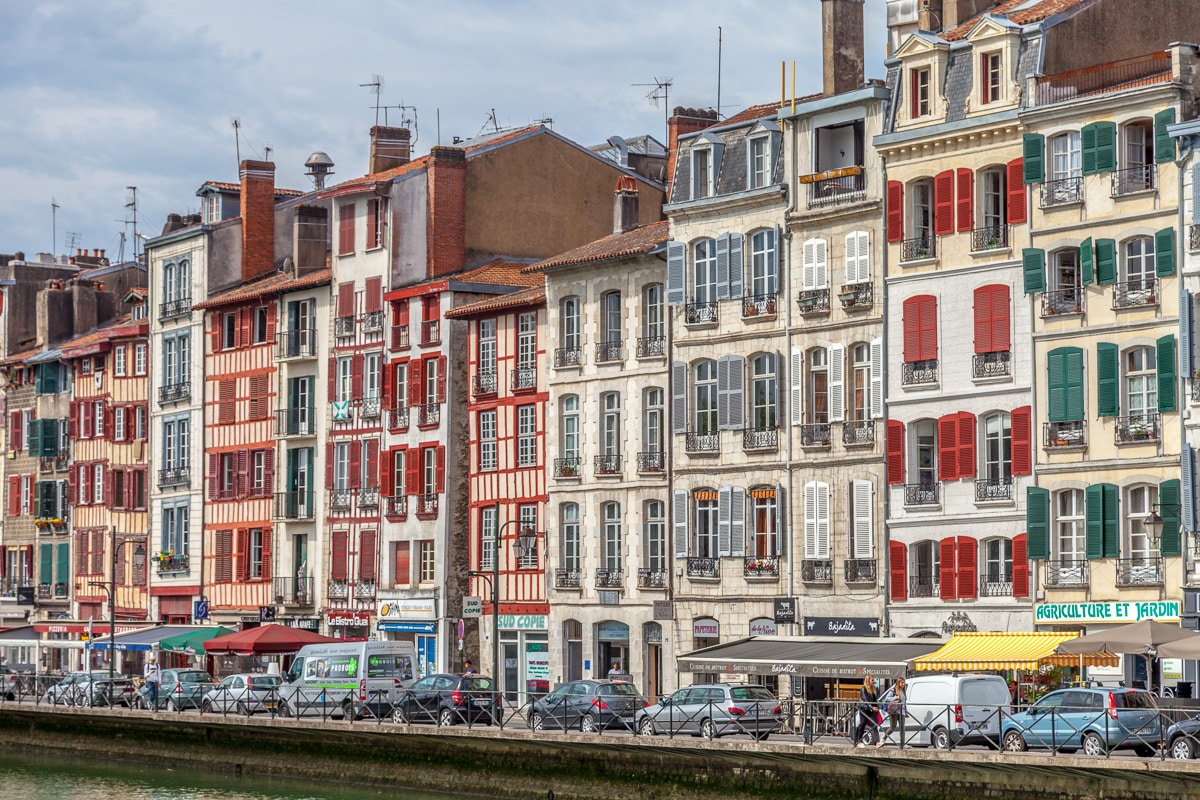 The following morning, after a good breakfast at the hotel, we drove the short distance north-east to Bayonne, the capital of the French Basque Country. The city has a rich historical past that dates back to at least the 1st century AD given its strategic location and as a port.

Curiously, the word bayonet is said to have been coined in the late 17th century from the French baïonnette, after Bayonne, where they were first made. 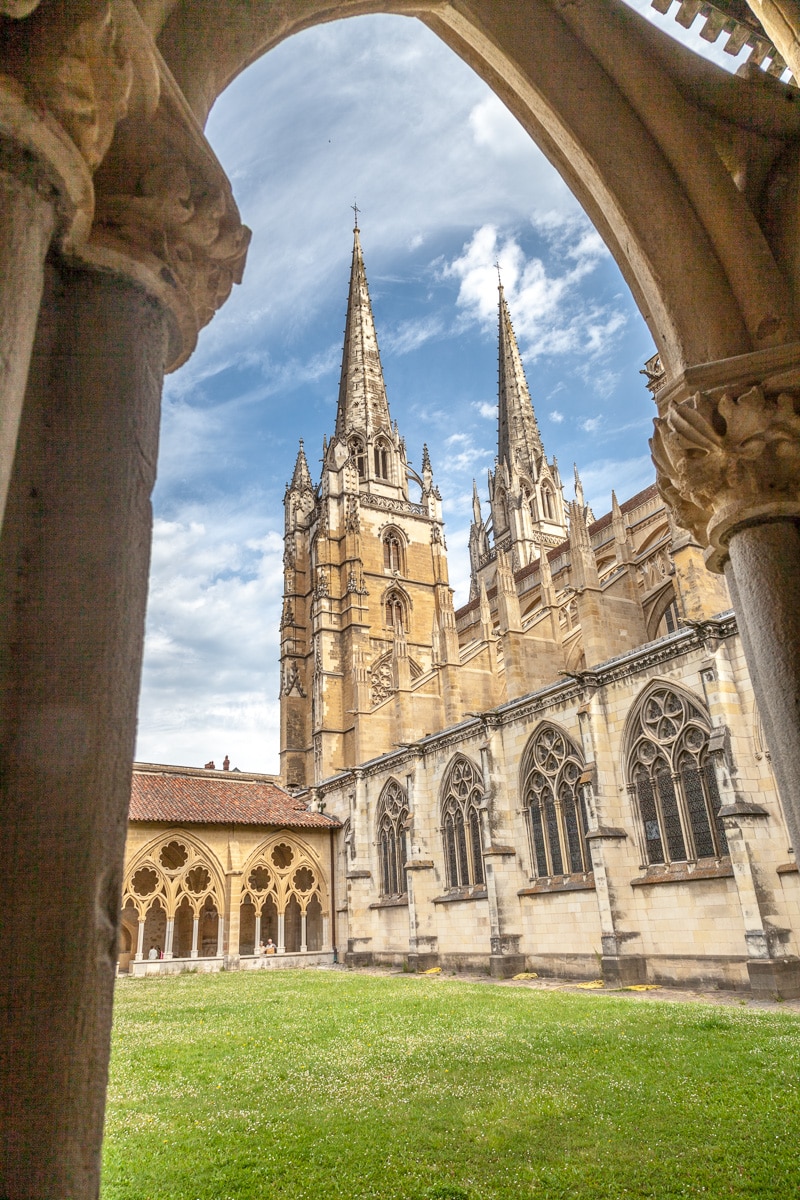 Though our time here was short, we wandered shady cobbled streets and along the waterfront admiring the pretty half-timbered buildings and gardens. Our path later brought us to the gothic Cathédrale Sainte-Marie de Bayonne and its charming cloister.

Before leaving, we had an opportunity to have a tour of Atelier Pierre Ibaïalde, a small independent local producer of jambon de Bayonne, and learned about the steps of preparing and aging jambon or ham as we passed hundreds of hams and sausages hanging on hooks from the ceiling. Finally, this informative tour ended with a 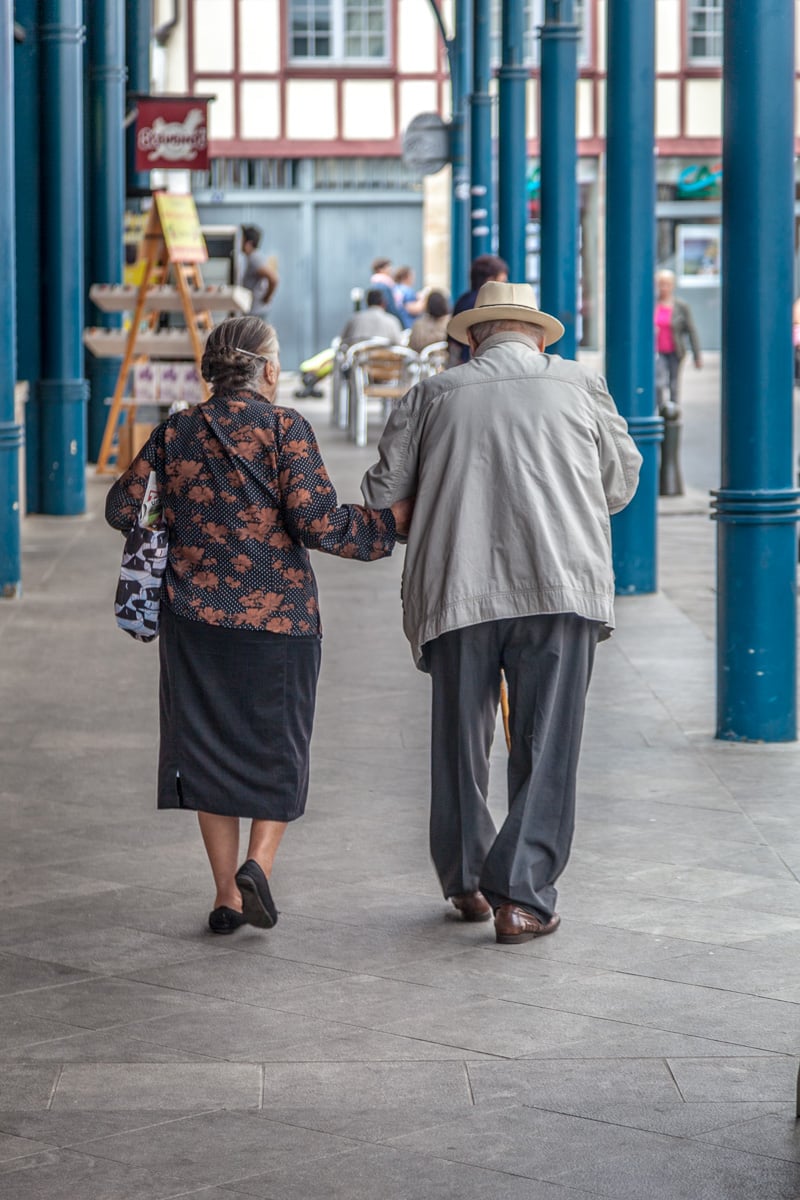 tasting of some of the jambon and saucissons.

Alas, the day was wearing on and we needed to get back on the road without giving Bayonne the visit that it obviously deserves. But we did enjoy the small taste of this delightful French Basque city.

So, the trip back to Toulouse was uneventful, though the sky was a bit darker due to some rain moving into the area. This time we couldn’t see the Pyrenees as we zipped down the motorway because of the clouds. But we got home safe and sound, and tired after a wonderful visit to the beaches and towns of the Basque coast of southwest French .