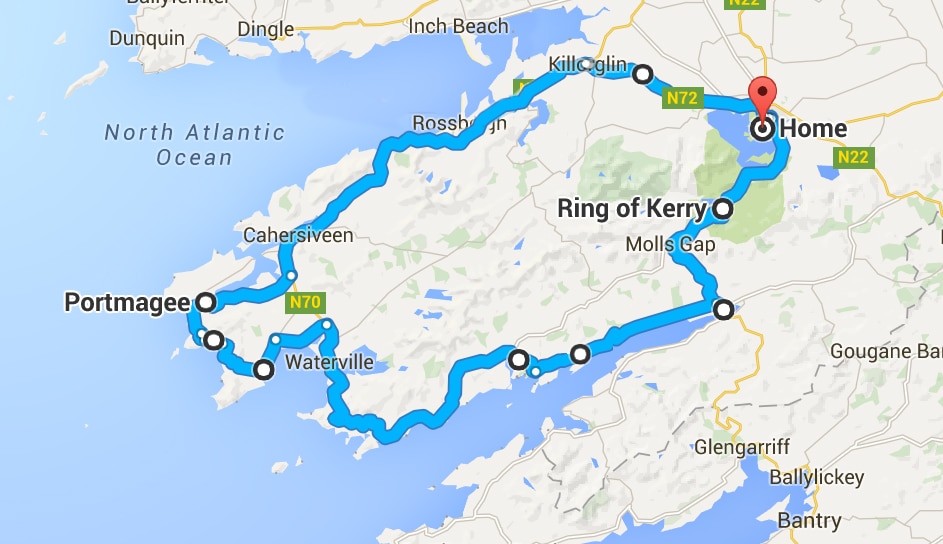 The Ring of Kerry is a scenic road circuit that skirts the edge of the Iveragh Peninsula – the middle and largest of three fingers of land that extend into the Atlantic on the Ireland’s south-western extremity.  It is one of Ireland’s best-known and most iconic drives. 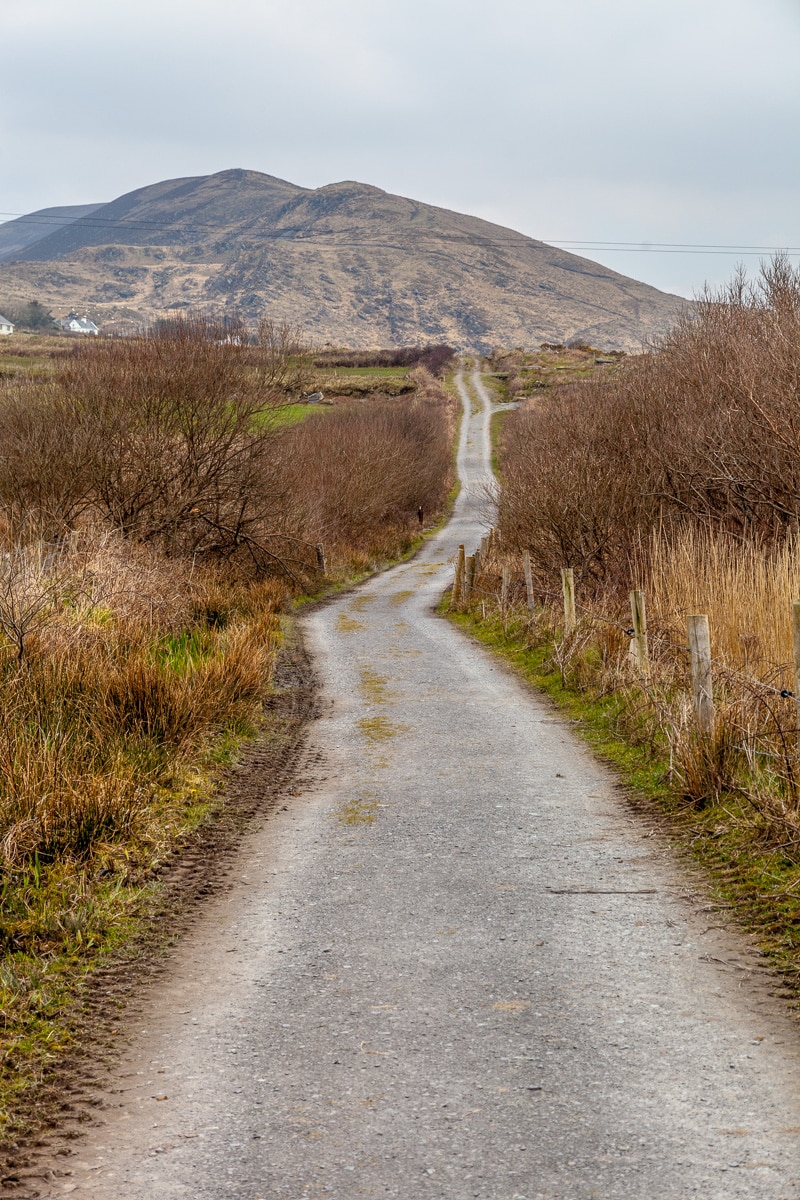 Driving the Ring is not for the timid however. The road, like many Irish roads, is narrow, has many twists and turns and, in most cases has no shoulder. There are also sections that cling to a rocky cliff high above the sea and can accommodate only one car width, meaning that someone must wait in the periodic little pullout so that two cars can squeak past each other, hopefully not exchanging paint. We took the advice of several sources and journeyed in a clockwise direction around the ring to avoid any tour buses if we were to travel in the opposite direction. Oh, and yeah, we were driving on the other side of the road, with left-handed shifting. 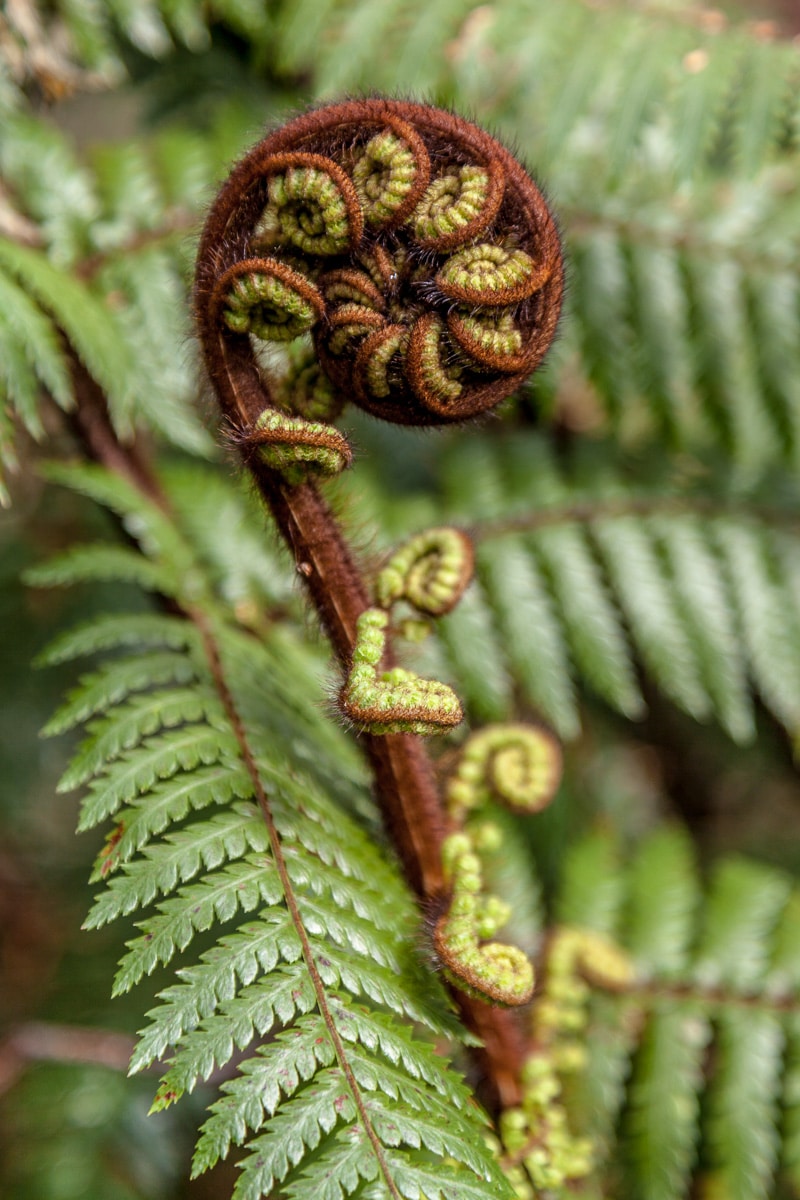 The route was pleasant though the skies were grey as we made our way through Killorglin,  Glenbeigh, and then to Kells where we stopped at the Kells Bay House and Gardens. The gardens are a 17ha | 40acre botanical park with views of Dingle Bay and are one of the most impressive collections of southern hemisphere plants in Ireland and Britain. Filled with a variety of sub-tropical plants, the moist, mossy, rocky terrain resembled a primeval forest.

After tea in the Garden’s cafe, we went down to Kells beach for a brief stroll before departing again.

The next stop was Cahersiveen, where we had read of three fortifications nearby in the hills west of the town. Leacanabuaile and Cahergall Stone Forts, and Ballycarbery Castle. 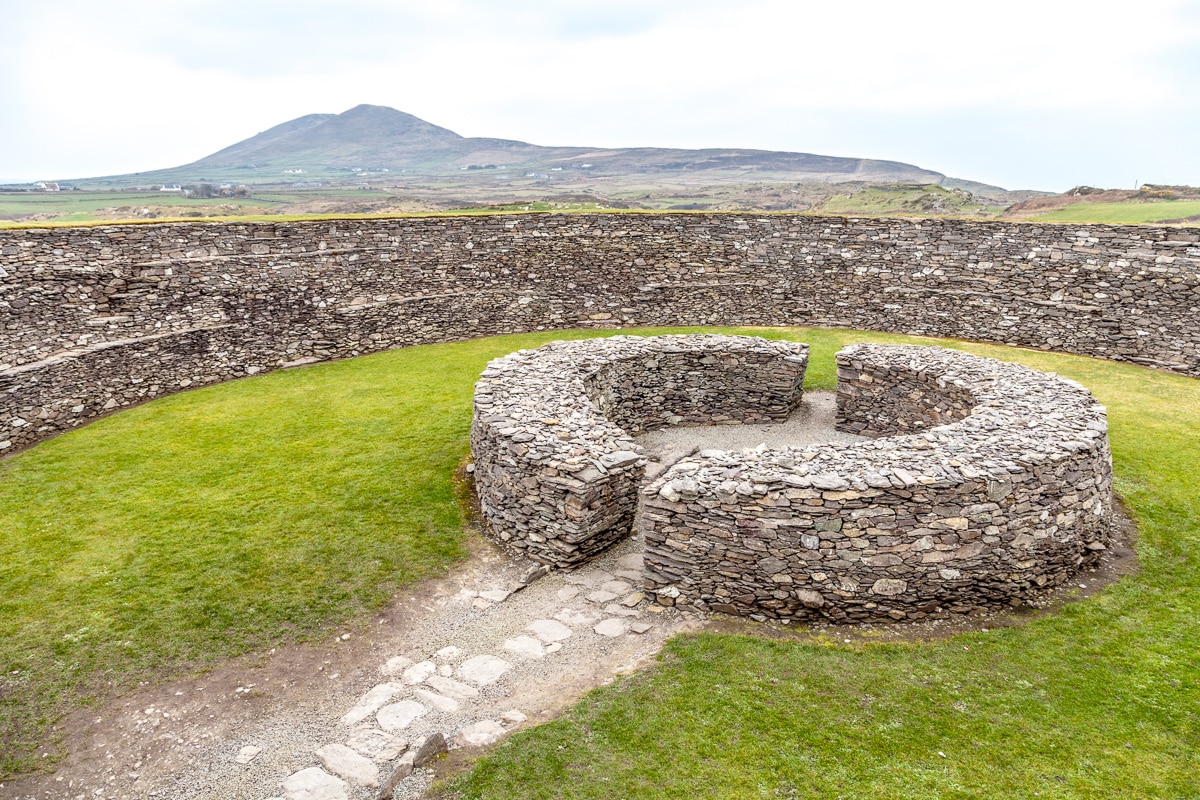 Cahergal and Leacanabuaile forts are ancient stone neighbors, known in Irish as “caiseal”, or in English “cashel,” as a stone fort. About 375m | 1/4mi apart, the original structures are likely over 1000 years old.

Ballycarbery Castle overlooks the sea near the mouth of the Valencia River about 3km from Cahersiveen. The ruins there today represent a sixteenth-century construction although there had been an earlier building on the site since the 14th century. The castle was captured and blown apart by Cromwell’s Parliamentary forces in 1652. 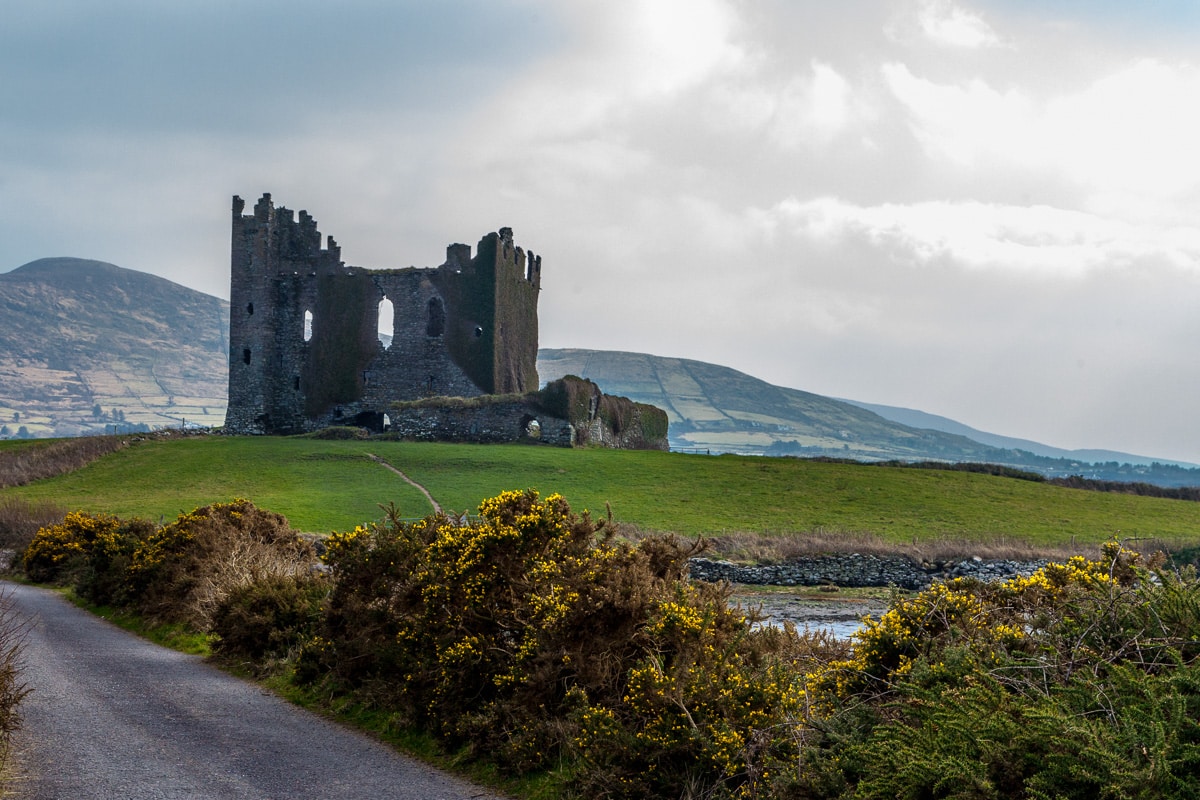 The castle is in ruins, and the whole back wall has fallen down. Little remains of the defensive wall that once surrounded the buildings, though you can still see the arrow slits along the remaining sections.

We returned to the Ring of Kerry/N70 for a short distance before again turning off to where we had hoped to take the ferry over to Valentia Island. Unfortunately, being early in the season, the ferry wasn’t running, so we returned to the main road.

Just a short distance later we turned on the much smaller R565 or the “Skellig Ring”, the second “Ring” of this post. 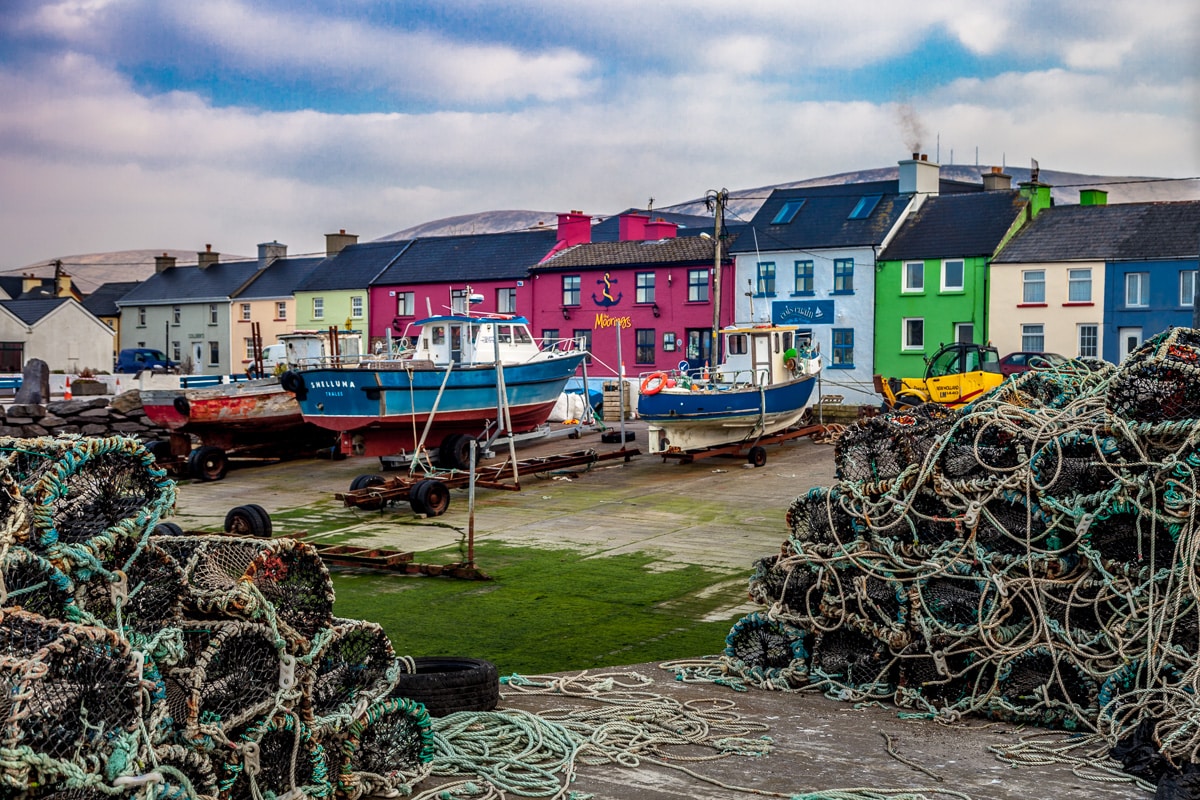 Arriving in the harbor town of Portmagee we located our hotel, the Moorings, overlooking the colorful little fishing harbor. As it is still early in the spring, we were the only people staying in the hotel. The well recommended hotel restaurant wasn’t open yet except to serve breakfast in the morning, but the pub had a good menu and plenty of Guinness.

The day was still young, the weather was good, meaning that is it wasn’t raining, there were a few patches of clear sky, but was cold and windy. We had been told about a good path to walk on Valentia Island that would take us to the tip of the island where we might get a view of the famous Skellig Islands. 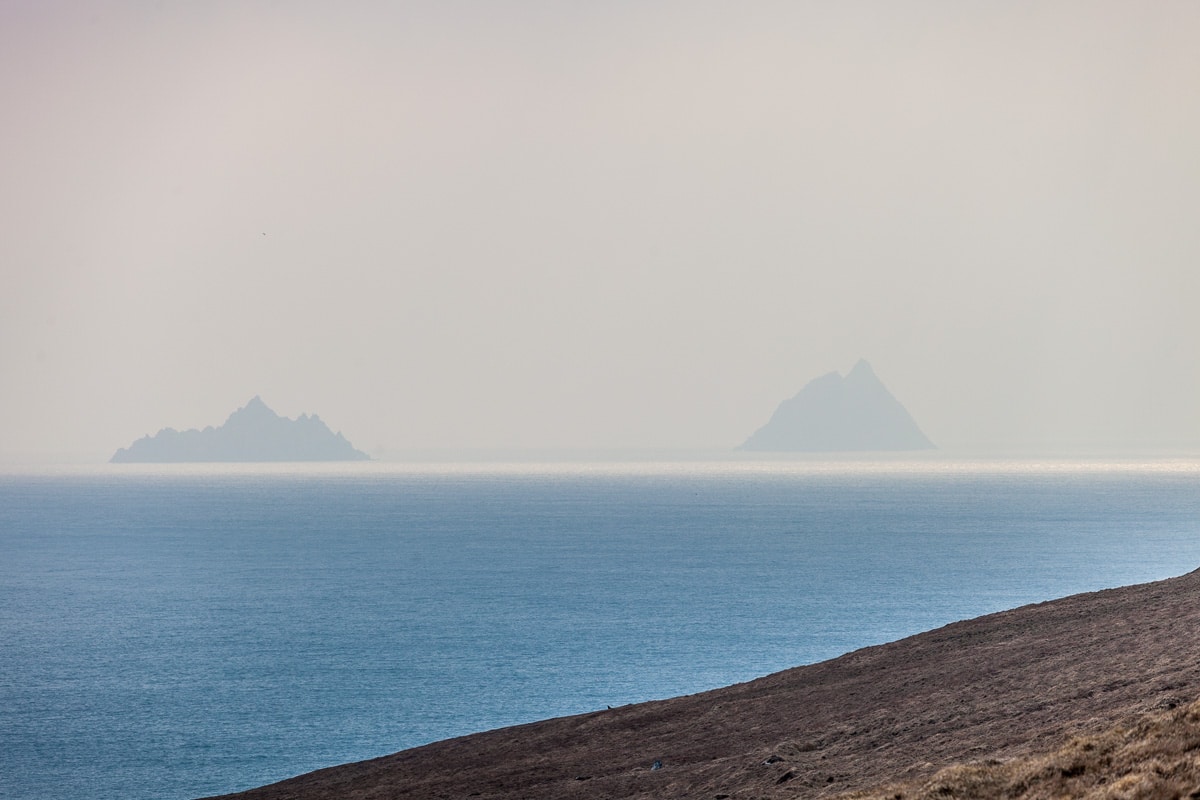 Skellig Michael, the largest of the two islands, is a World Heritage site for a 6th century, isolated and storm-lashed, community of monks. Historians say the monks who built the monastic site, walked the 600 plus steps daily to the water’s edge where they would fish for their breakfast, abandoned the site in the 12th century.

However, Skellig Michael is most recently known for its role in the recent release of “Star Wars: The Force Awakens” where it starred in the final scenes of the film. Yet again, we were too early to visit as boats can only go to Skellig Michael between May and October, and after hiking to the furthest point of Valencia Island, we only caught glimpses of the craggy peaks as they were shrouded in mists. 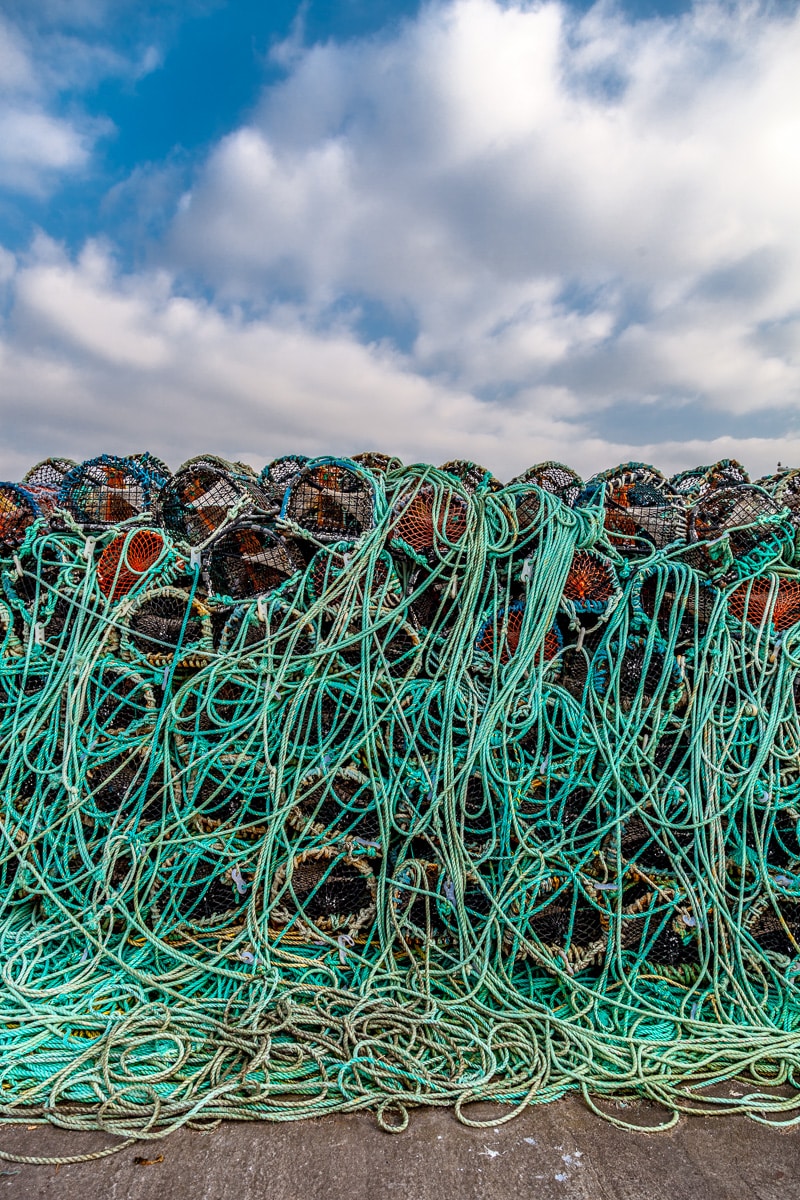 The small, colorful fishing village of Portmagee is the primary departure point for boats taking visitors to Skellig Michael, but in the off-season it is quiet and sleepy. A few fishing boats brought in their catch in the late afternoon, but nonetheless the colorful village itself was a delight for the eyes and the camera.

The afternoon was wearing on, and we had explored the town from end to end, so we went to the bar for a couple of beers and dinner. After a delicious meal we retired to our room for a good night’s sleep … with the exception of a not-too-late, brief fire alarm evacuation due to a faulty sensor.