[Several of the links below are in bold, they are audio recordings. I apologize for the poor quality, but I think the point will be made.] 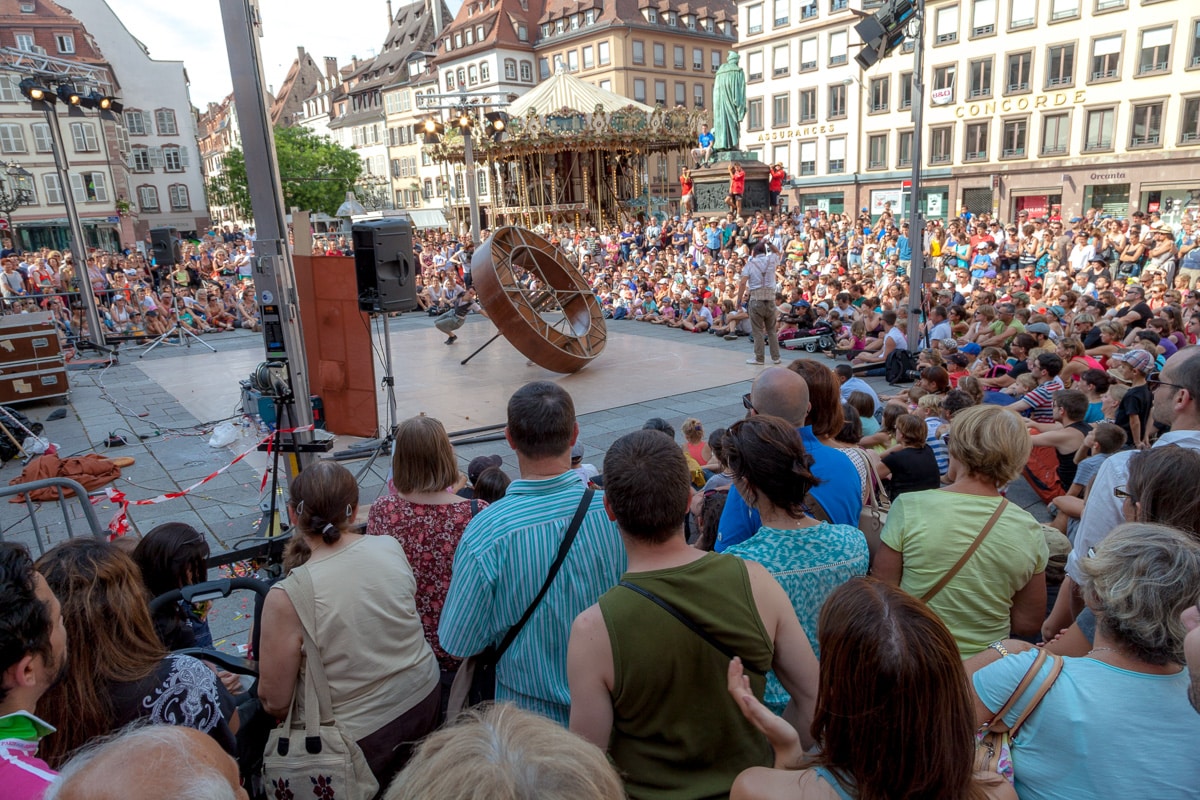 During the summer months in Europe there are always cultural events to experience. We are continually on the lookout for concerts, dance, street performers, or other such events that help make this adventure special. We tend to lean towards local, simple musical performances in the local cathedrals and churches since they generally suit our musical tastes, i.e. classical and budget. Vocal groups, baroque chamber music, organ concerts are often on our list of things to do. 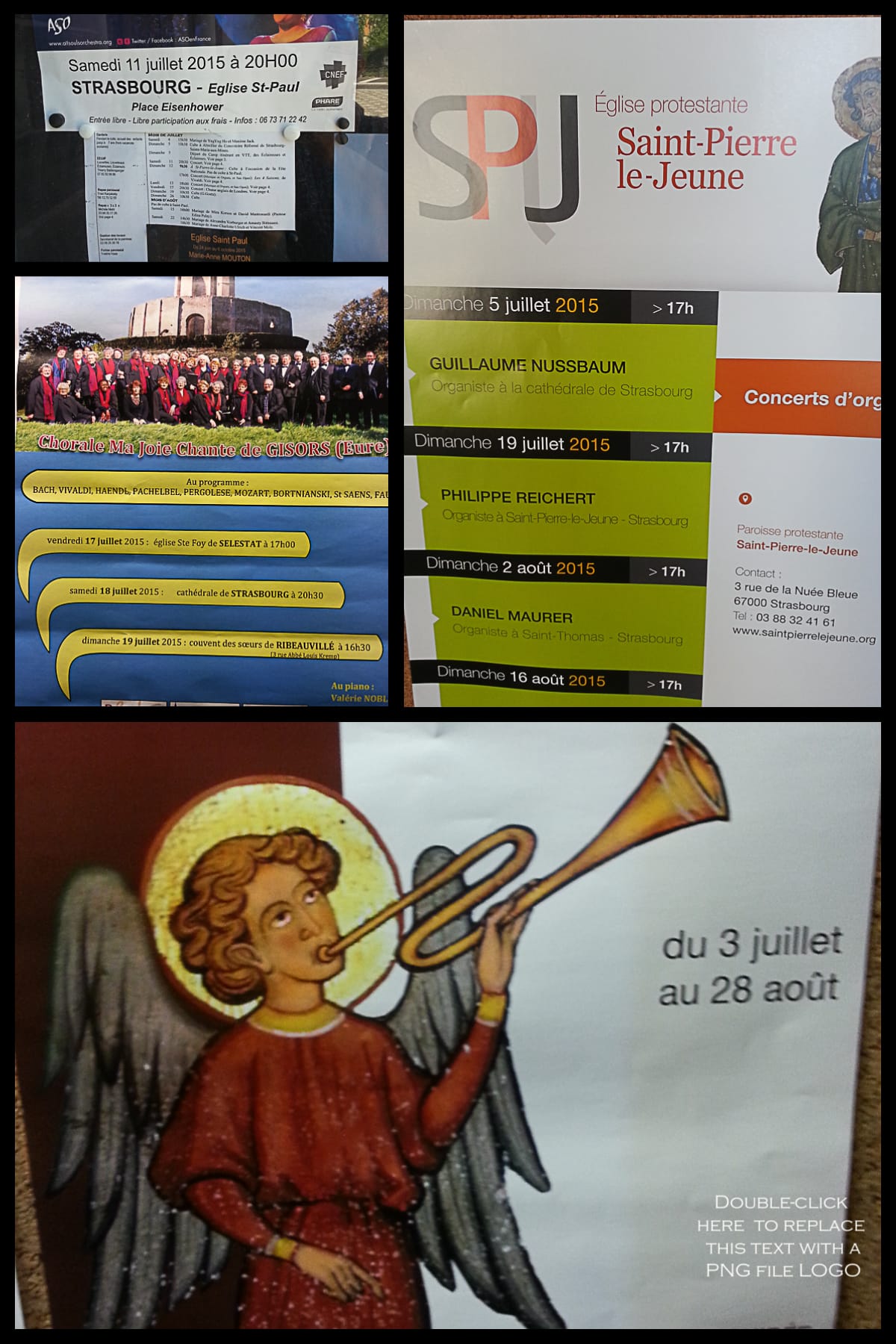 We have experienced some exquisite music in many different venues; Gregorian chants in soaring medieval cathedrals, a guitar duet playing rather eclectic modern pieces in an ancient cloister, or an afternoon concert performed by members of the local symphony and opera company in the opera house primarily directed at children.

A secondary motive involves being able to visit places like the grand old opera house that is normally closed, or the great cathedrals at night when they too are closed. These are special places that cannot normally be visited except during performances. 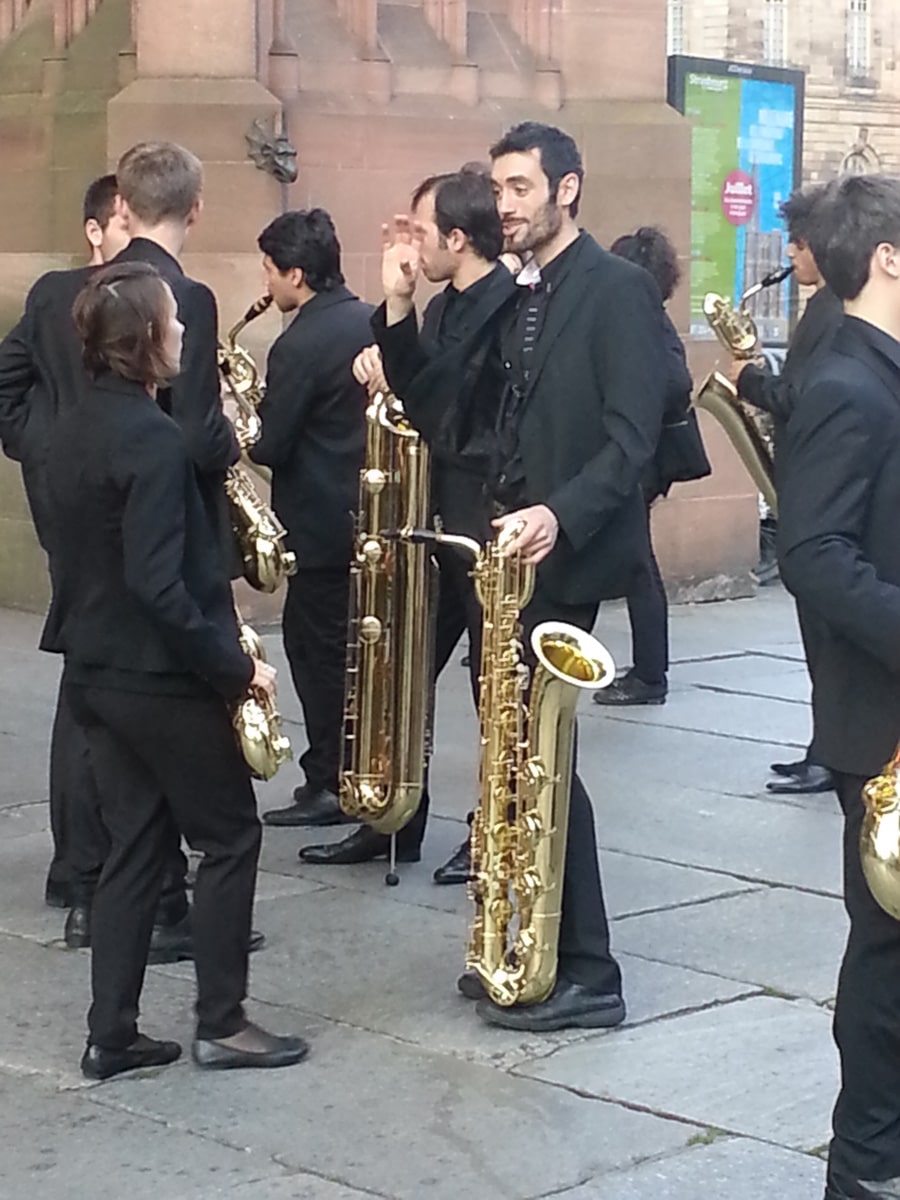 We also tried to attend a couple of saxophone concerts at the Cathedral de Strasbourg while the 2015 World Saxophone Congress was going on, but there was very limited seating; though as the saxophonists were assembled outside the cathedral waiting to enter, it was interesting to hear them warming up and to see the wide range of instruments. 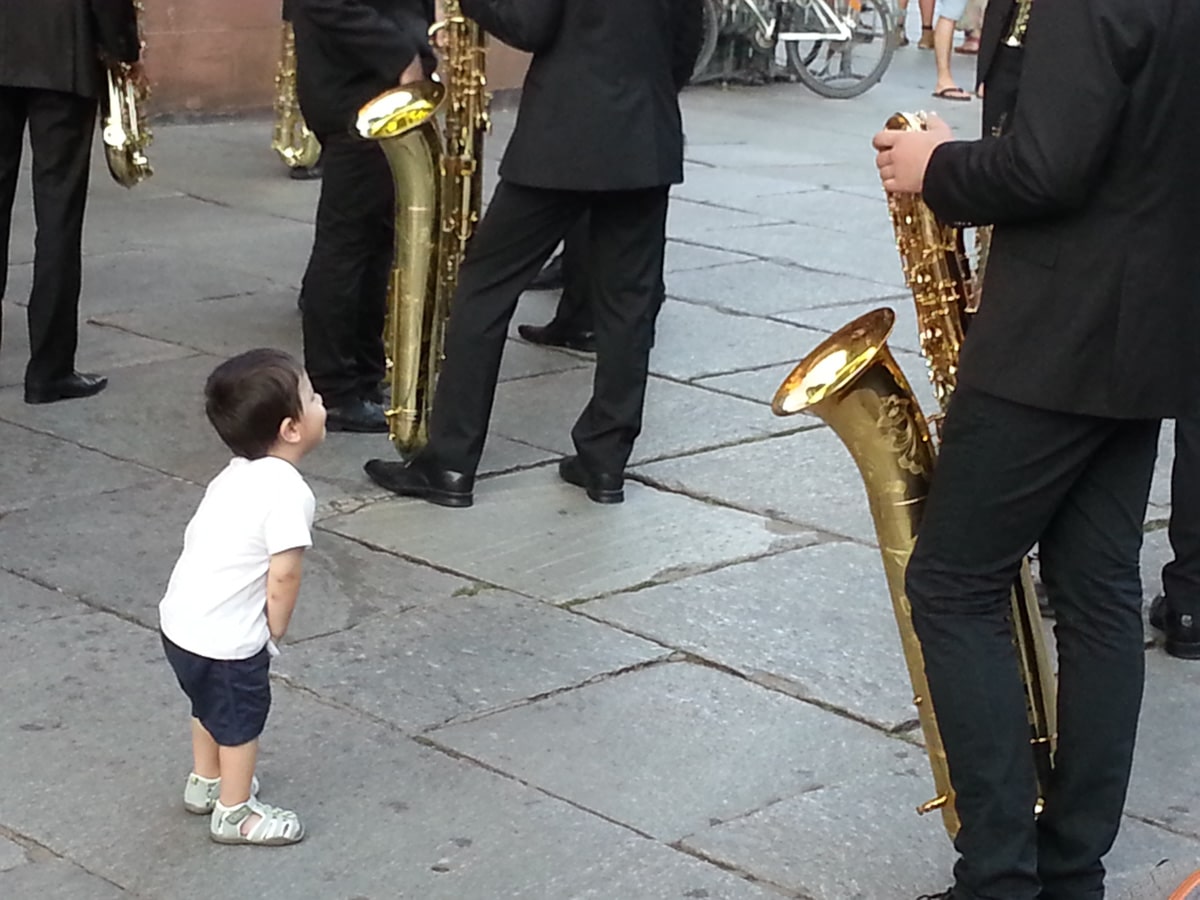 It seemed that our luck had changed when we showed up for a choral concert and easily got in. We knew nothing of the group and had no idea what to expect. The interior of the Cathedral was quite different than during the day. Gone were the throngs of tourists milling about leaving only the silence of the vast stone structure with its Gothic arches and high stained-glass windows that darkened as daylight ended.

The choir entered and lined up on the stairs in front of the altar, and after an introduction began their program. It was a joyful noise. One could hear that they were in awe of their surroundings. The conductor carefully allowed the sounds of the echoes from the great stone interior to dissipate during pauses. But unfortunately the performance wasn’t up to the grandeur of the venue. Still, there were pieces that were good, and the chorus knew it – whether they knew that the audience could tell or not – they beamed with pride at the sound. Those pieces we did enjoy, and yet when the final passage was sung and the bows taken, we didn’t wait around for an encore.

On the other hand, the Scouts et Guides de France is an organization similar to the Boy and Girl Scouts in the US, though more religious in nature. This year, from July 16 until 23, 15,000 young Europeans gathered in Strasbourg to learn of citizenship, living together, taking responsibility and environmental awareness. After the main event was over they were everywhere. Their characteristic uniforms with scarves and badges made them easy to spot as they sat together about the city. 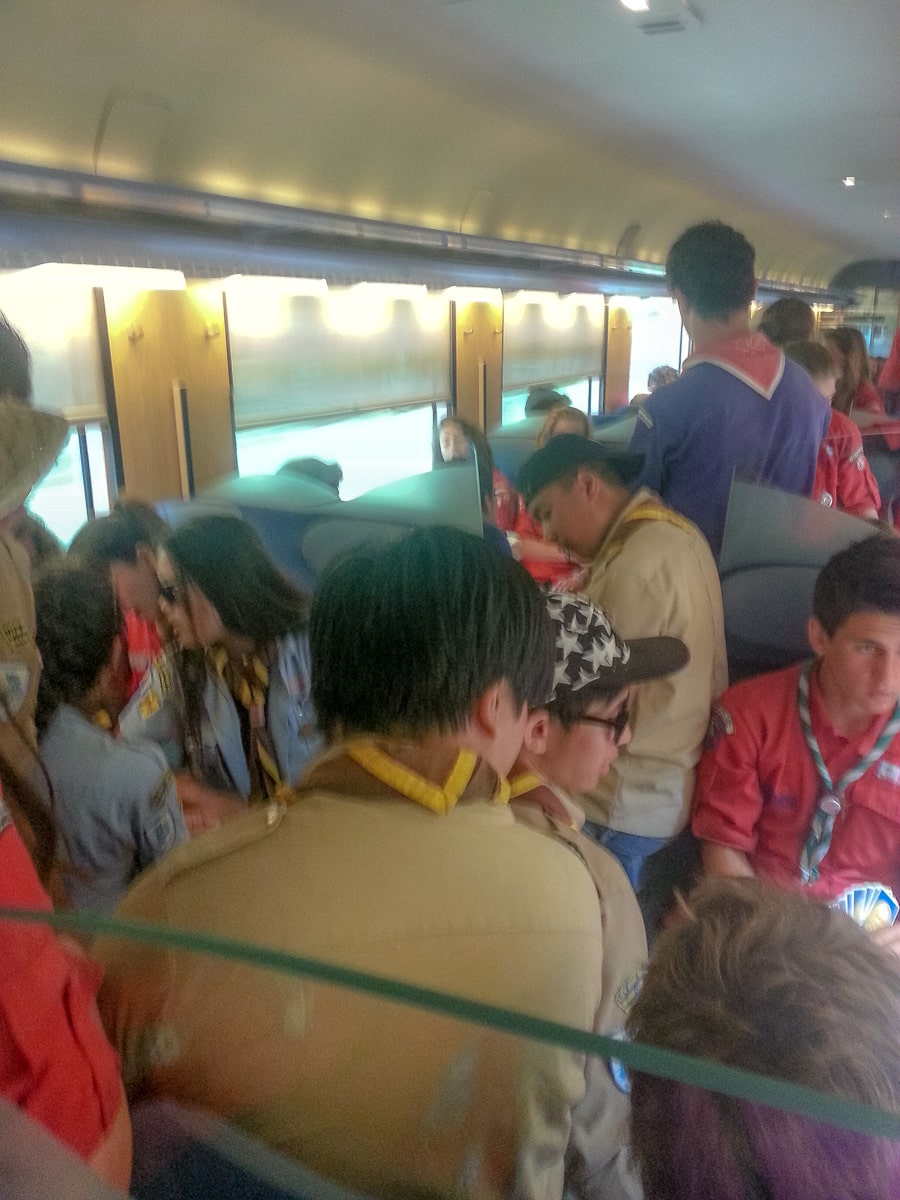 On the day we took the train from Strasbourg to Colmar, we were joined on the platform by hundreds of young Scout Guides also waiting for the same train. Expectations of rowdy, noisy, unruly young people were quickly dispelled. They were all well behaved, and curiously, without any observable electronic devices. When the train arrived Jeannie and I quickly found seats as the cars filled to “standing room only”.

After a short while, we found ourselves in the middle of a concert of a different type. One of the group produced a guitar, and after some light strumming, a few others joined in on some soft songs. Many on the train were quite tired, some sleeping with their heads on their seat mates shoulders, others gazing out the windows of the passing countryside deep in thought.

As the train moved along the music invited others of their group to join in. Most joined in singing what sounded like contemporary pop tunes, and we even recognized a couple. They were all pleasant sounding songs sung with youthful exuberance. We applauded when each song finished, and received smiles of approval from some of the young folk around us. Along the way, I looked about at a couple of the other “older” passengers on the train with us and saw that they too were enjoying this impromptu concert.

When our stop arrived and we got up to get off, two lovely young girls who had been standing in the aisle next to our seat, moved to let us out. Smiles were exchanged as I said “Merci beaucoup,” knowing that my thank you was received as thanks for the music as much as for anything.

As we walked from the train one of the songs remained in our heads for quite a while … it was good.