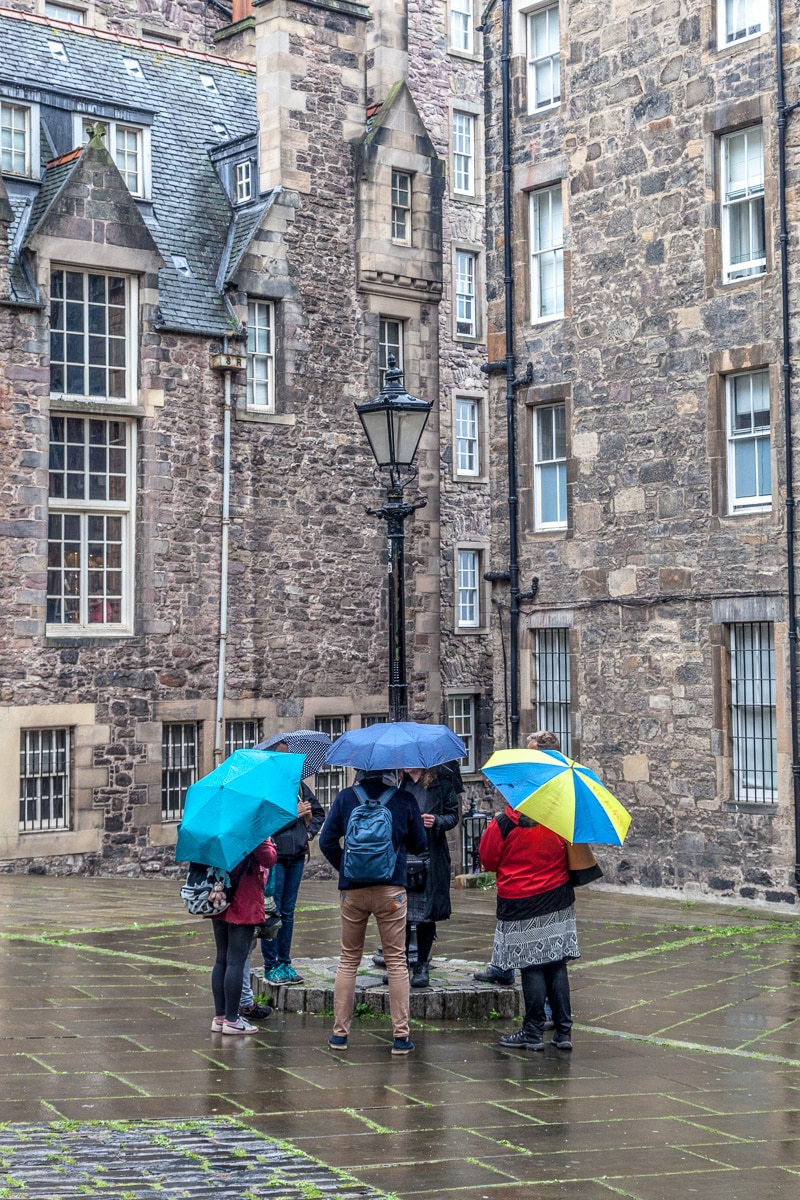 The weather on Sunday was beautiful. Though cool, the sky was clear and blue, truly a day to get outside, especially in Edinburgh.

The subject of Edinburgh’s weather hasn’t come up yet, so with the story of a beautiful day ahead, it is fitting that the weather be discussed now.

By most standards, Edinburgh’s weather isn’t good, there are lots of windy, cloudy days, most with passing showers, downpours, or the heavy mist that blows sideways (or all three). Rain will enter your appropriate clothing past velcroed flaps, through zippers, and between one’s face and the jacket hood. It isn’t unusual to see locals wearing Wellies as well.

The Scots will, in one of the frequent, sudden showers, often just soldier on in whatever they are wearing. And while tourists scurry for shelter or open their brollies the locals accept the weather as is. Being wet is somewhat of a fashion statement here. 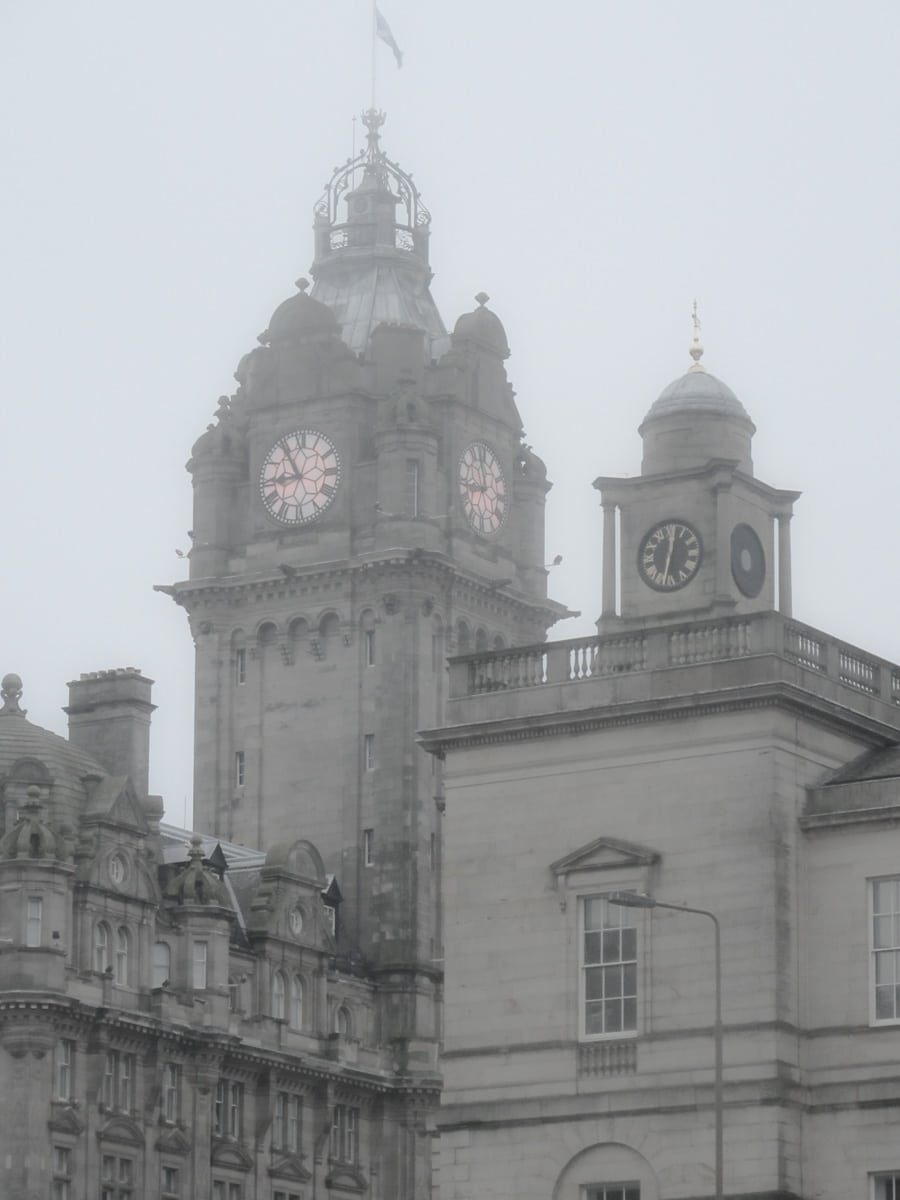 It is difficult to consider fashion when everything must be appropriate for the weather, any and all kinds of weather. Begin with layers of warm things, anything, whether it matches or not. You likely will be removing layers as you move inside as the temperatures there will be much warmer. All outerwear must be appropriately waterproof, and shoes should be able to take lots of downpours and puddles. Since cobblestones worn smooth by centuries of foot traffic can be very slippery when wet, which is often heavy, grippy soles are a must. To repeat Cousin Carl’s comment, “All weather is good if you have the right clothing and a good attitude.” It is a mantra that we have repeated often under our breath. 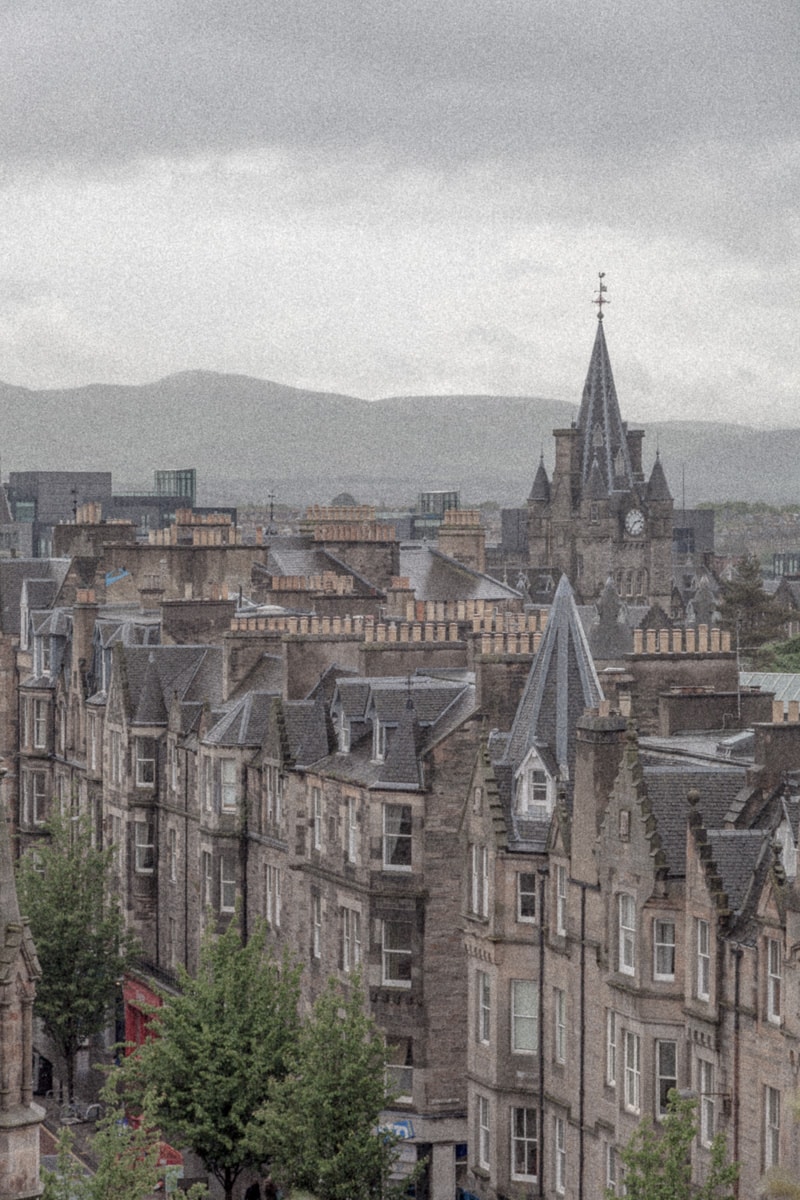 Of course Scottish weather’s bad reputation is also the opinion of most locals. Things we have heard include, “In Edinburgh, if you expect rain you won’t be disappointed.”, or “Edinburgh has two kinds of weather, grey and dark grey.”, and “Scotland is where you can, and likely will get four seasons in one day.”

As Jeannie said more than once, Scotland DESERVES better weather.

Having said all that, we usually take off in winds and rains with a giggle and a bounce in our step simply because … this is an adventure. And to be honest, the cold, gray stone from which this city is built takes on a more colorful cast when wet.  Of course, a few hours later when we are cold and wet, it is really nice to return to home (to our apartment) to change clothes; warm up with a hot cup of tea, and watch the bad weather from inside. 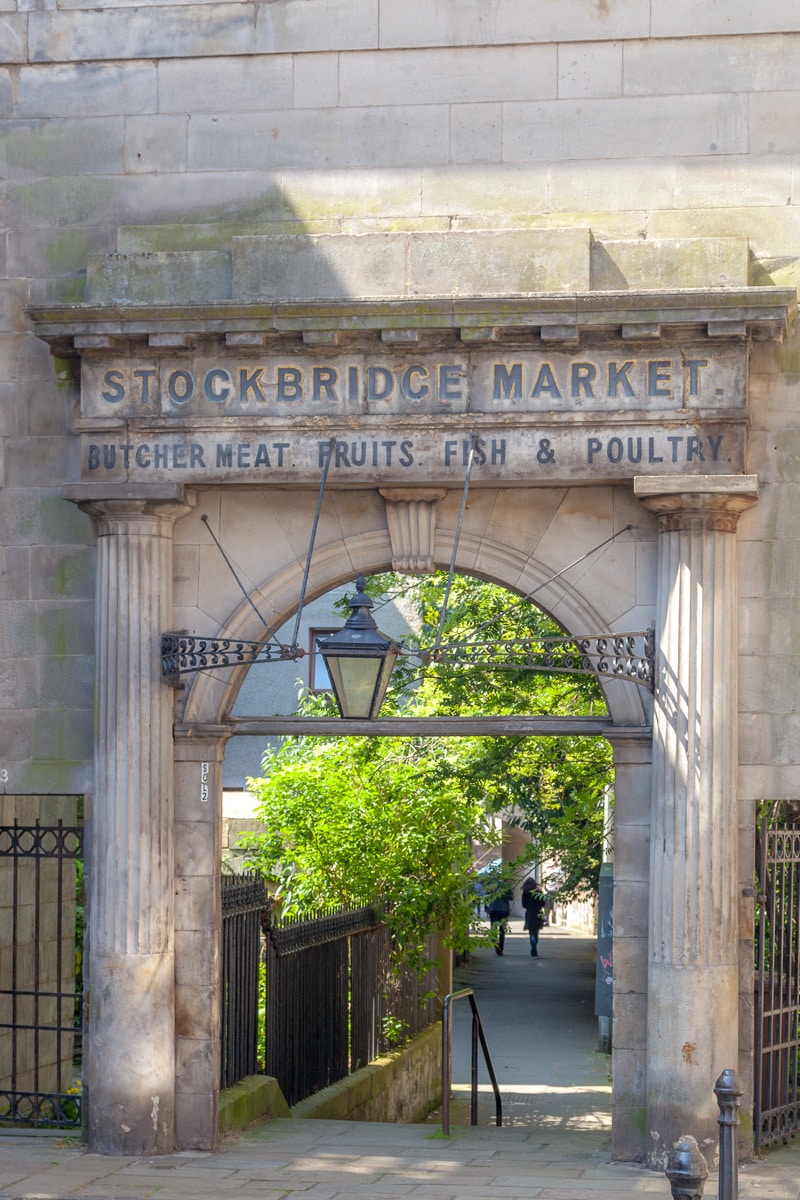 Our first destination was the Stockbridge market, a small, charming food and crafts market in the small urban village of Stockbridge, incorporated into Edinburgh in the 19th century. Nice and cozy it sells a variety of homemade foods in a lovely location. We picked up a few items to help with dinner preparations as well as the makings for a picnic later on.

Afterwards, we walked from Stockbridge market to Dean Village along the Water of Leith Path.

The Water of Leith is a river that flows from the Pentland Hills to the south-west snaking through Edinburgh to the port of Leith where it flows into the sea. Along its 12-mile course through the city, it is also a linear park of vegetation, water, and wildlife, and a well-used walkway (and cycleway) either beside or nearby the Water of Leith. 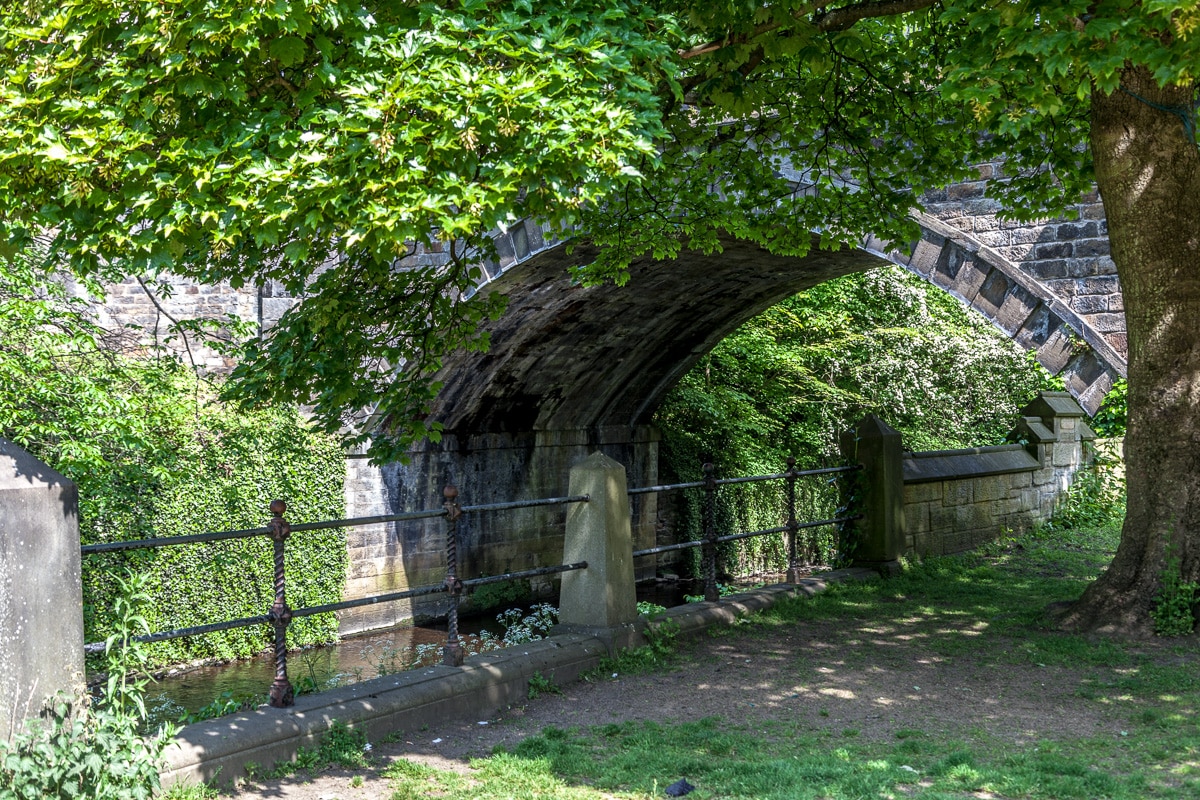 It is about one mile or so along the river to Dean Village. The walkway is charming, and the scenery with its rugged rock faces and mature trees is impressive. It takes you past various leftovers from the area’s mill days and under the massive stone Bridge of Dean before reaching the Village that was the center of grain milling in the area for more than 800 years.

From Dean Village we followed the river further to a spot on the river with a bench that was perfect for our picnic. The sun was still shining and the only problem was our food attracting the attention of every leashed-dog that walked past. 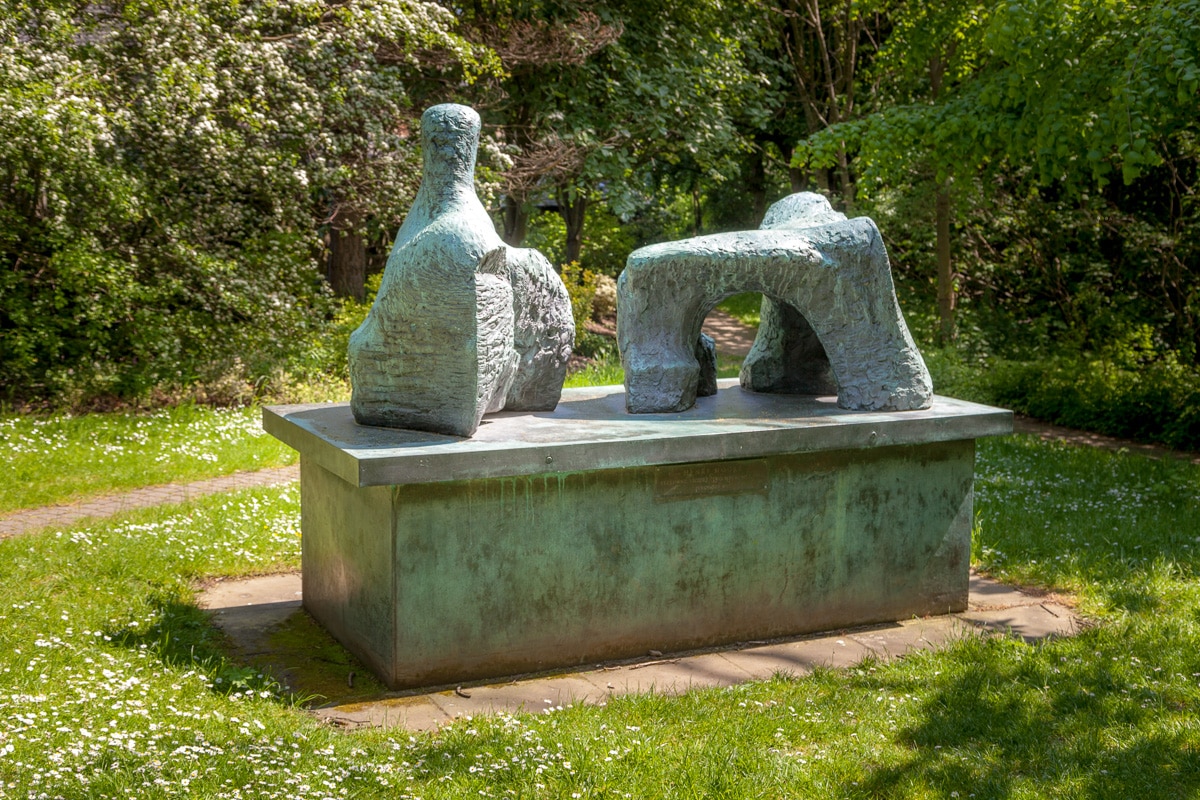 After finishing our picnic, we had no idea where we would go, but continuing on seemed like a good idea until we came to a sign that pointed toward a small wooden bridge across the Water Of Leith. That path led to a steep wooden staircase up to the Scottish National Gallery of Modern Art. 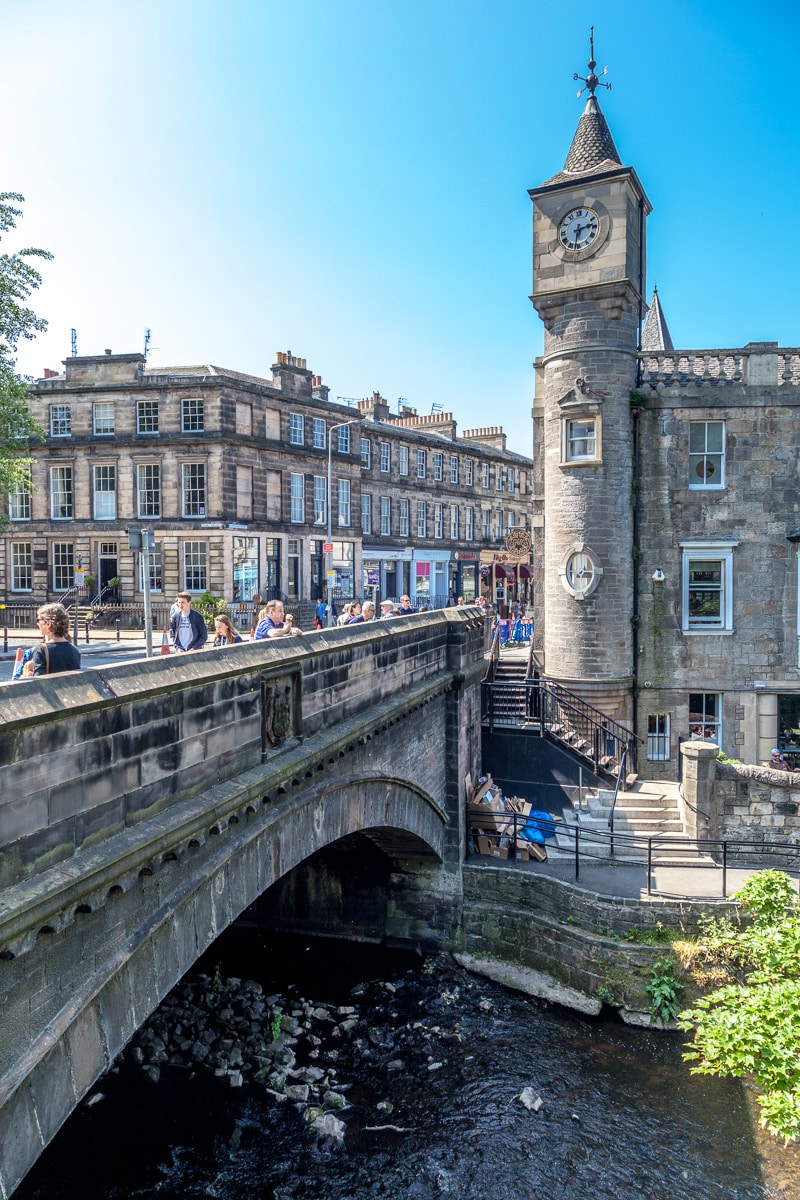 Since it was still a beautiful day we only went inside the Museum for a brief pop in. As with most of the big museums in Edinburgh it is free, and all are exceptional. We would be back, but more on that in a future post.

Wandering on, we eventually made it back to Stockbridge where we had some coffee and cake at a small cafe before catching the bus back to our apartment. We had made use of the day with its mild temperatures and sunshine, but always with our rainwear at the ready.