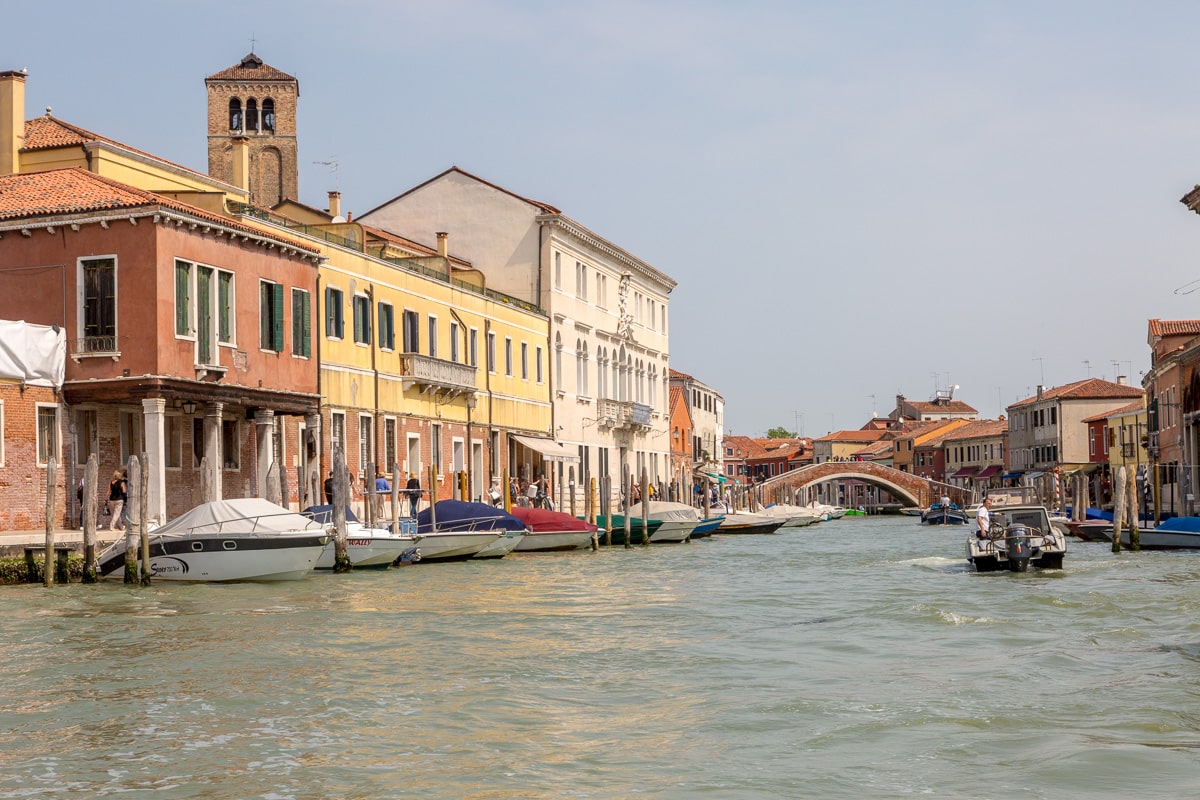 The last time we were in Venice, my brother (Mike) and his wife (Kathy) were visiting us in Italy. We had met in Cortona, and then went by train to Florence, and then on to Venice. It was our first time to Venice, it was winter – the second week in February, and it was cold. But in spite of that, Venice was magical.

From Verona by train, Venice is close; only about 1-1½ hours away . Our good friends, Niels and Jette, had just visited us for a few days in Verona and they were going to Venice for a short stay before returning to Denmark. 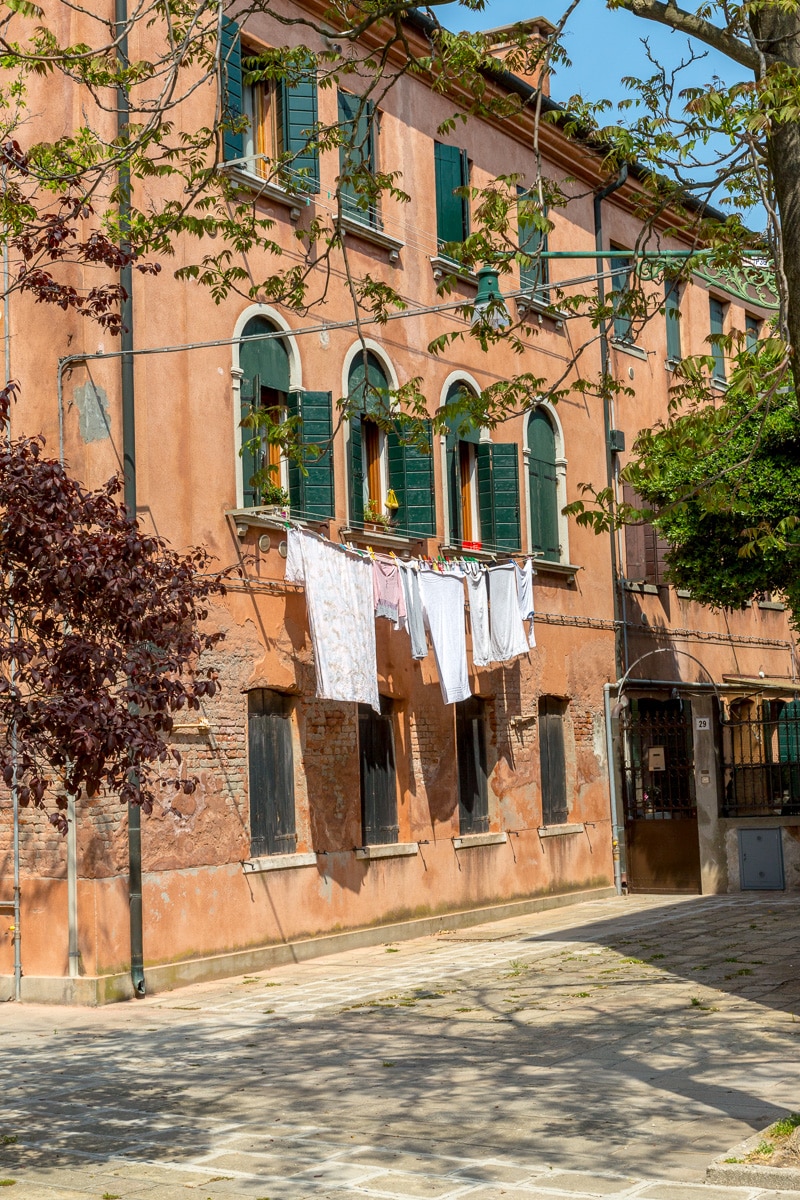 They suggested that we come over for some sightseeing and lunch, and we looked forward to spending a bit more time with them. So we took the train, pulling into Venezia Santa Lucia train station about 10:00.

Niels and Jette were waiting near the platform and we were soon discussing the day’s plans.

Since we had all been in Venice before and the big touristic sights were getting crowded, we opted to take the vaporetto or waterbus over to the nearby island of Murano where Niels and Jette wanted to visit the Murano Glass Museum. We, on the other hand, wanted to enjoy the beautiful day by wandering. 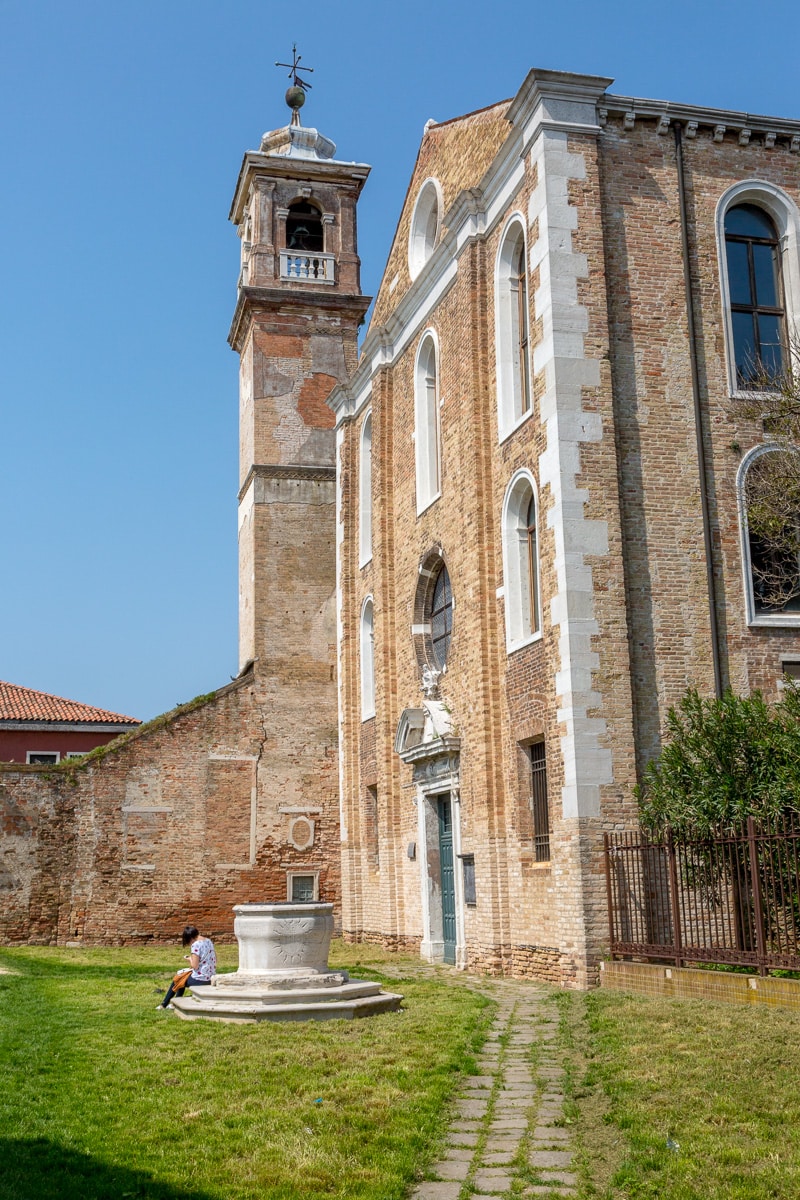 So, at the museum Jeannie and I decided to head off in a different direction and then meet back for lunch. Jette had researched a small, local place that was well off the beaten path and had great reviews.

Murano is rather small, and to get lost would be difficult, so we turned down almost every little alley and street that we came upon. Delightfully, we found ourselves back in the areas where most tourists never venture.

It was so different, but it was the sounds that caught my attention. The cheerful greetings between old friends, the giggles of small children with their mothers, the shuffle of an elderly gentleman on his way home with groceries, all told a very different story from the noisy hustle and bustle just a short distance away.

Returning to meet our friends, we first visited the Basilica dei Santi Maria e Donato. Founded in the 7th century, it was rebuilt in the 9th and then most recently around 1140. The Byzantine-style exterior of this church is beautiful, but inside it is even more spectacular with its dome of gold glass mosaic and an elaborate, 12th-century mosaic floor of geometric patterns and designs rendered in colorful stones. 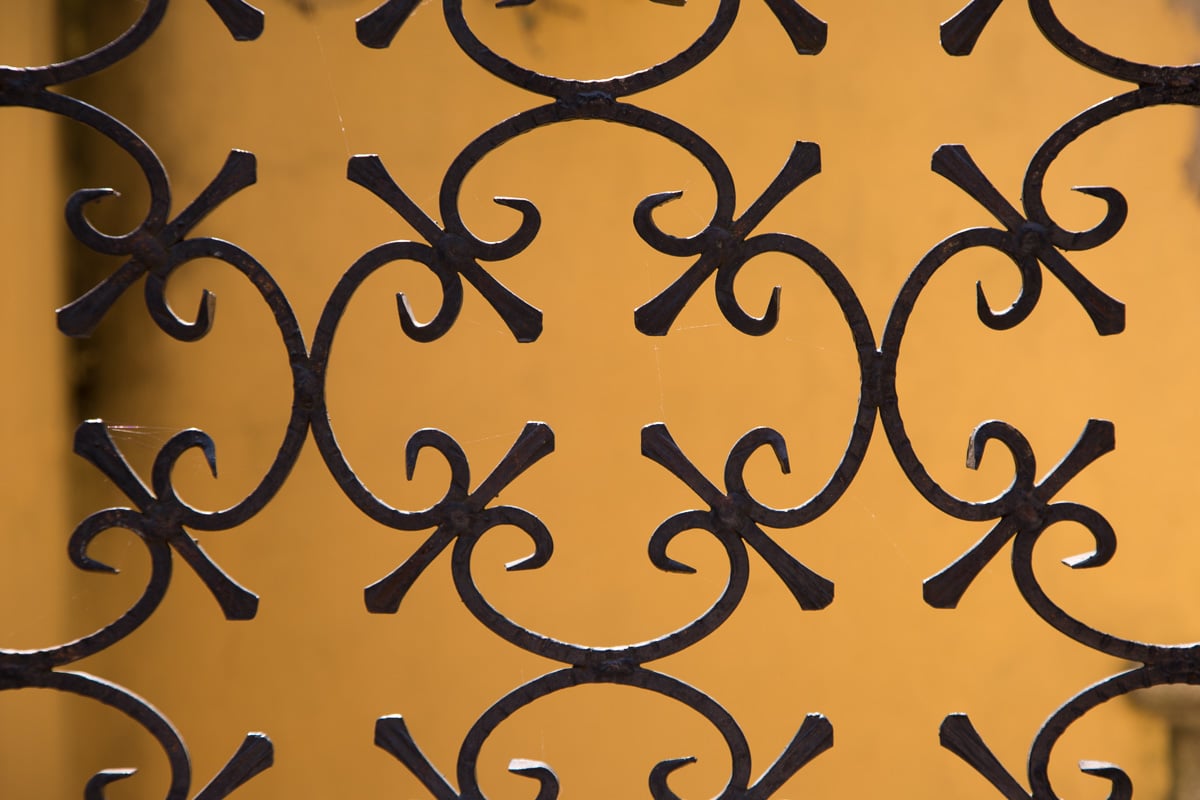 From there we wandered the back streets toward the restaurant. At one point we stopped in a small piazza as Jette studied her GPS. She remarked that the restaurant should be very near, but there were no signs to indicate that we were close. As we looked around the area more diligently, a street sign showed that we were on Campo S. Bernardo, the right street, and right in front of us, was the practically unmarked restaurant – Osteria La Perla Ai Bisatei. We left the empty piazza and entered into the small, obscure entry where we were in the line for a table.

We were seated quickly, and ushered into a simple, crowded back room filled with local workers, residents, and tourists who had also found the hidden location. The menu was simple, and our meals were abundant and quite affordable for Venice.

After a very good meal, we found our way back to the “bus stop” for the short vaporetto ride back to Venice. The plan for the afternoon was to visit the Venetian Jewish quarter and take a tour, given by the Jewish Museum of Venice, of some of the famous synagogues there.

It was in 1516, that the Venetian Republic granted Jews the right to settle, under strict conditions, on a small island, the site of a former geto, or metal foundry. The decree also allowed Jewish lenders, doctors and clothing merchants to attend to Venice’s commercial interests by day, while at night and on Christian holidays, they were forced into the gated and locked island.

According to our tour guide, the German-speaking Ashkenazim couldn’t voice the soft “g” of geto, (pronounced jeto), instead pronouncing it ghetto (get-oh), giving us the spelling and pronunciation we have today, now sadly synonymous with segregation and persecution. 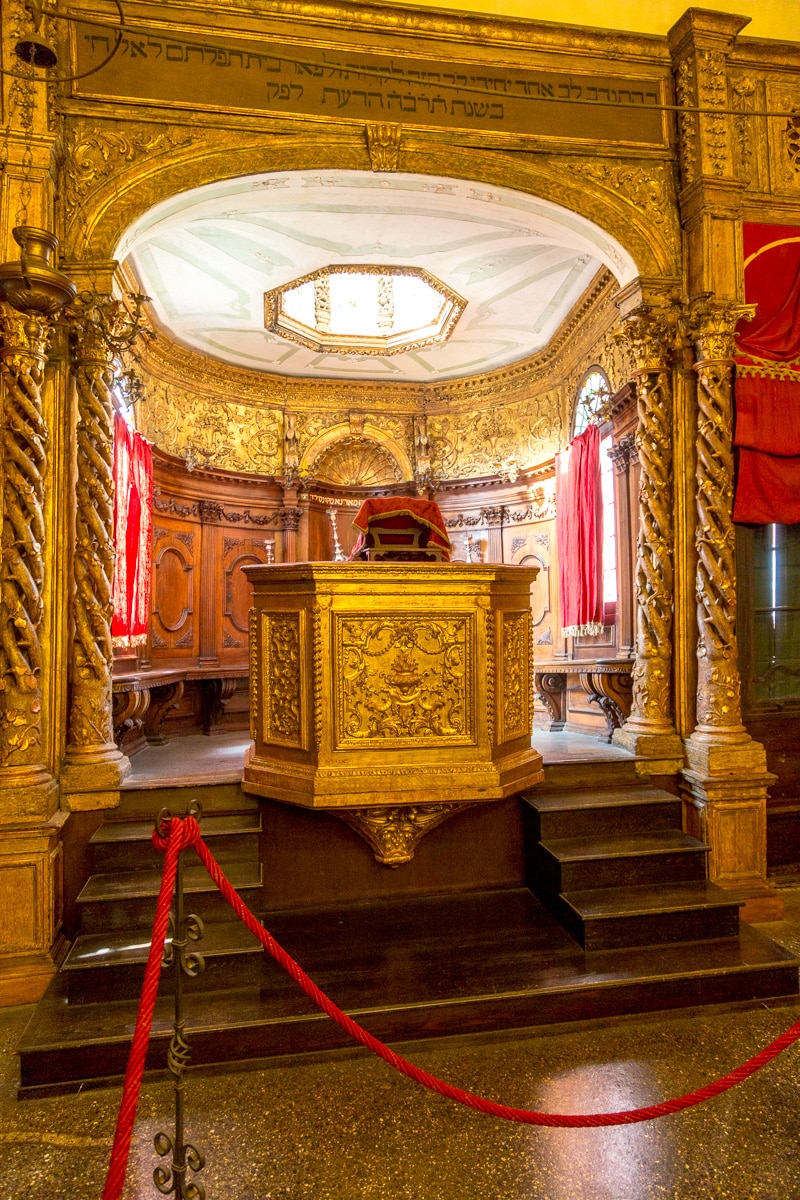 The tour took us through three of the 16th century synagogues on the small island that is the Venetian ghetto.

In 1787, Venice fell to Napoleon who demolished the ghetto gateways and lifted the restrictions on the Jews. The French were idealistically determined to “remove that mark of separation between the Jewish Citizens and the other Citizens, where no such mark should exist.” 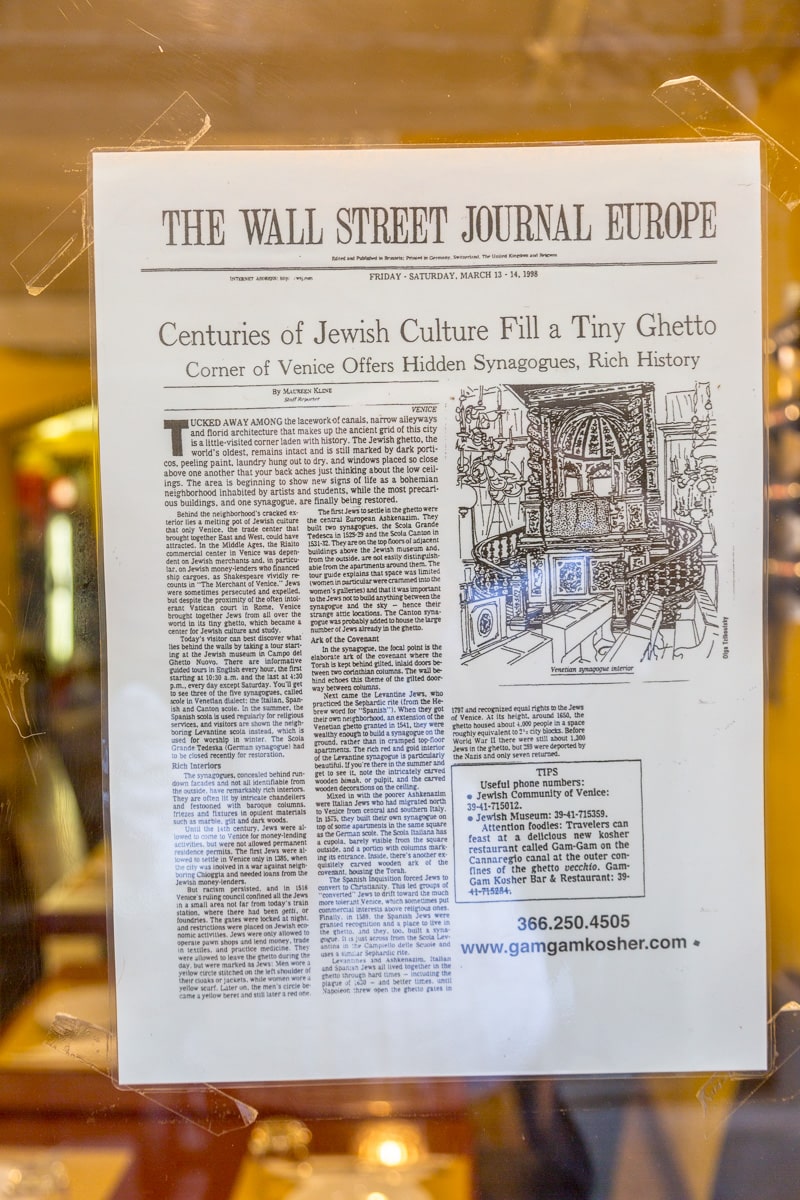 Unfortunately, after the Treaty of Campo Formio, in 1797, Austria annexed Venice, and reinstated many of the restrictions on the city’s Jews. It wasn’t until Venice joined with Italy in 1866 that emancipation was regained, but even that was short lived. Many of Venice’s Jews fled before the Nazi occupation but of the 246 that were arrested and sent to the camps between 1943 and 1944, only eight survived.

The Ghetto is now being reinvented as a Site of Memory, and a general tourist attraction while also serving as a focal point for Venice’s Jewish population. 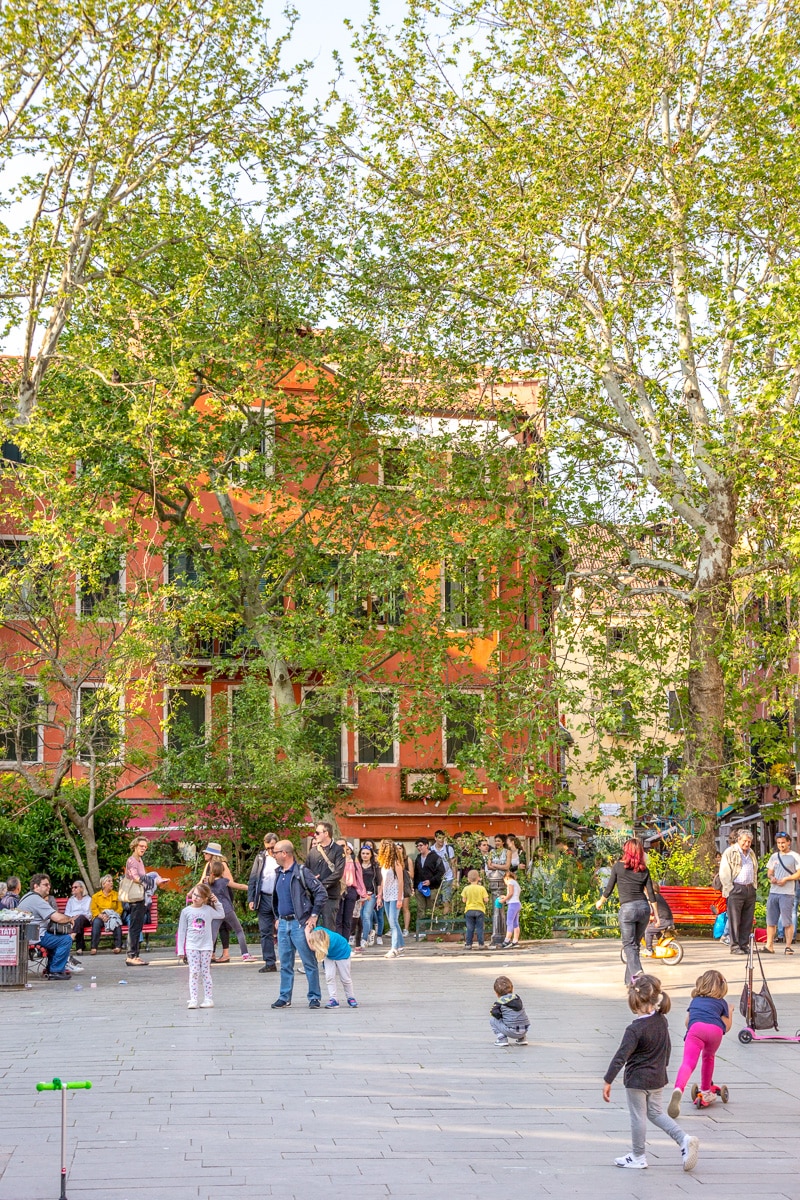 The Jewish Museum of Venice is helping to share and educate as well as serving as narrators and custodians of an important cultural heritage.

Moving on, the four of us strolled some more, then stopped at a cafe on the edge of a small piazza for some liquid refreshments. It was later in the afternoon, families were out and happy squeals filled the air as children ran and played.

Still later, gelato was in order to top off a wonderful and educational day with friends. However, it was time for us to make our way back to Verona. So we bid another fond farewell to Niels and Jette promising to meet up again … somewhere. (Pssst, don’t tell anyone but Portugal has been mentioned.)