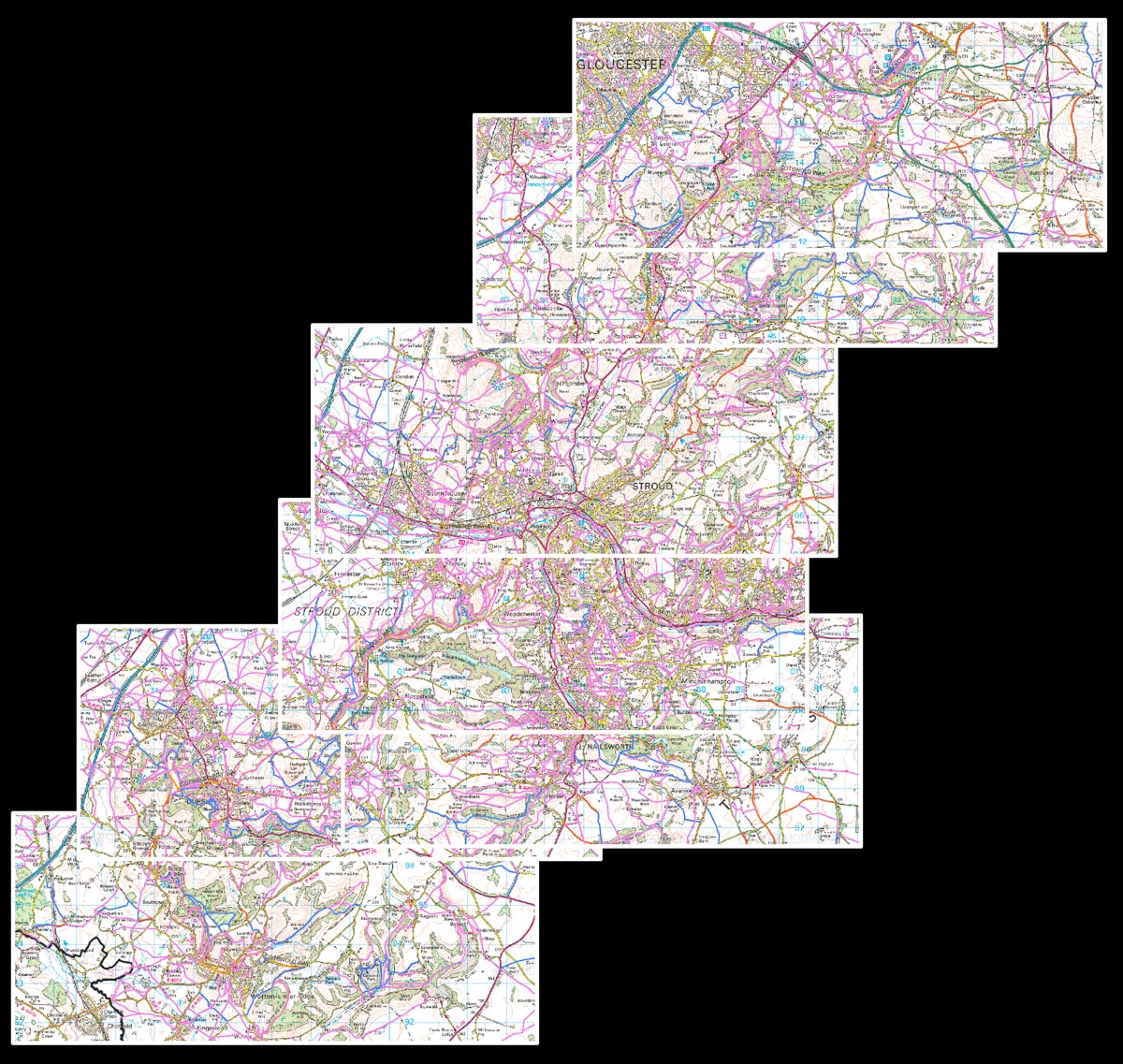 Once our plans to spend three months walking in the Cotswolds of England were finalized, we began our research about where to begin our explorations. After consulting our online Ordinance Survey (OS) Maps, websites and several paper maps, we realized could happily fill our days with walks from one end of this region to another.

Based on our experience in Lancashire last year, we were also aware of local walking or “rambling” clubs. So, as part of our planning, we searched the internet and turned up several walking groups in the Cotswolds area. 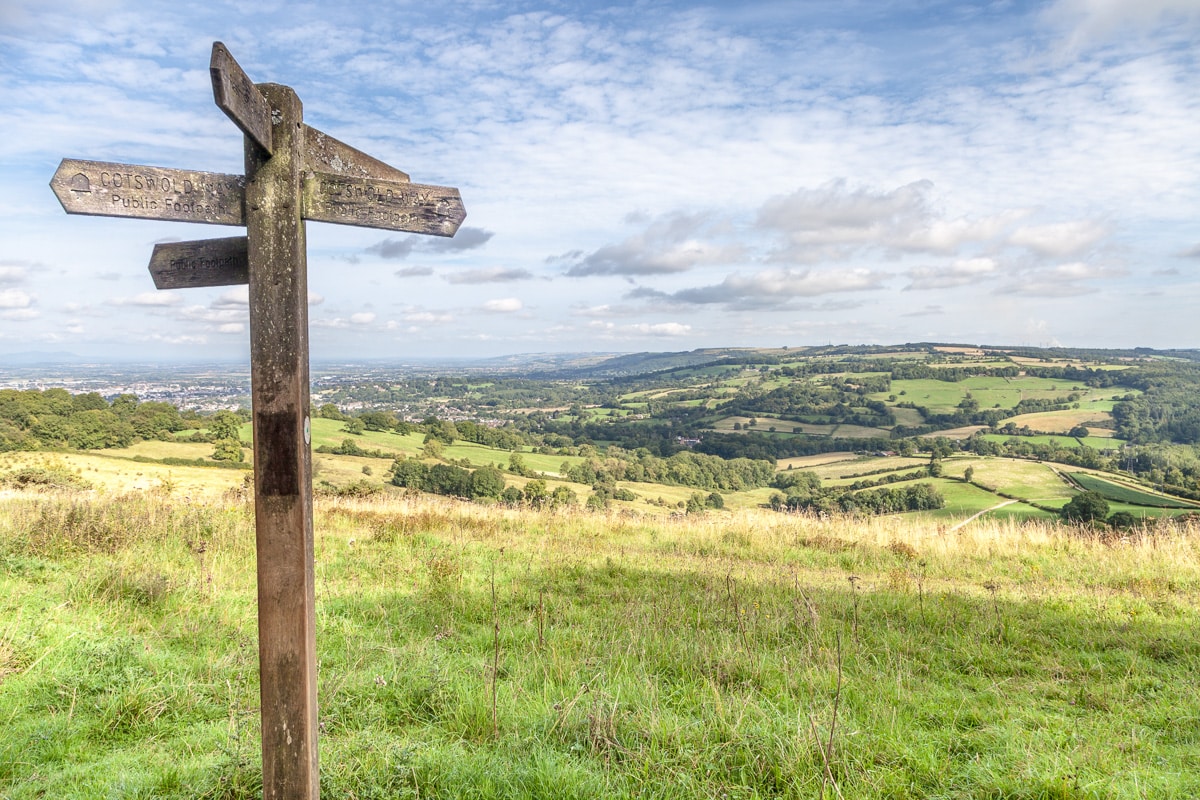 Obviously we enjoy walking, and the area could provide many options. But to really get a feel for this place, we needed more “local” knowledge.  Besides, always hiking by ourselves requires added daily planning and navigation, and would offer limited social interaction. While connecting with a rambling club would allow us to take walks we wouldn’t know about or be able to find on our own, alleviate some responsibility for routing, and most importantly, to meet people.

Once we arrived in England, and after reviewing the various walking schedules, we chose the Stroud Rambling Club (SRC). It is a mature organization, formed in 1953, so it’s kind of like Jeannie. 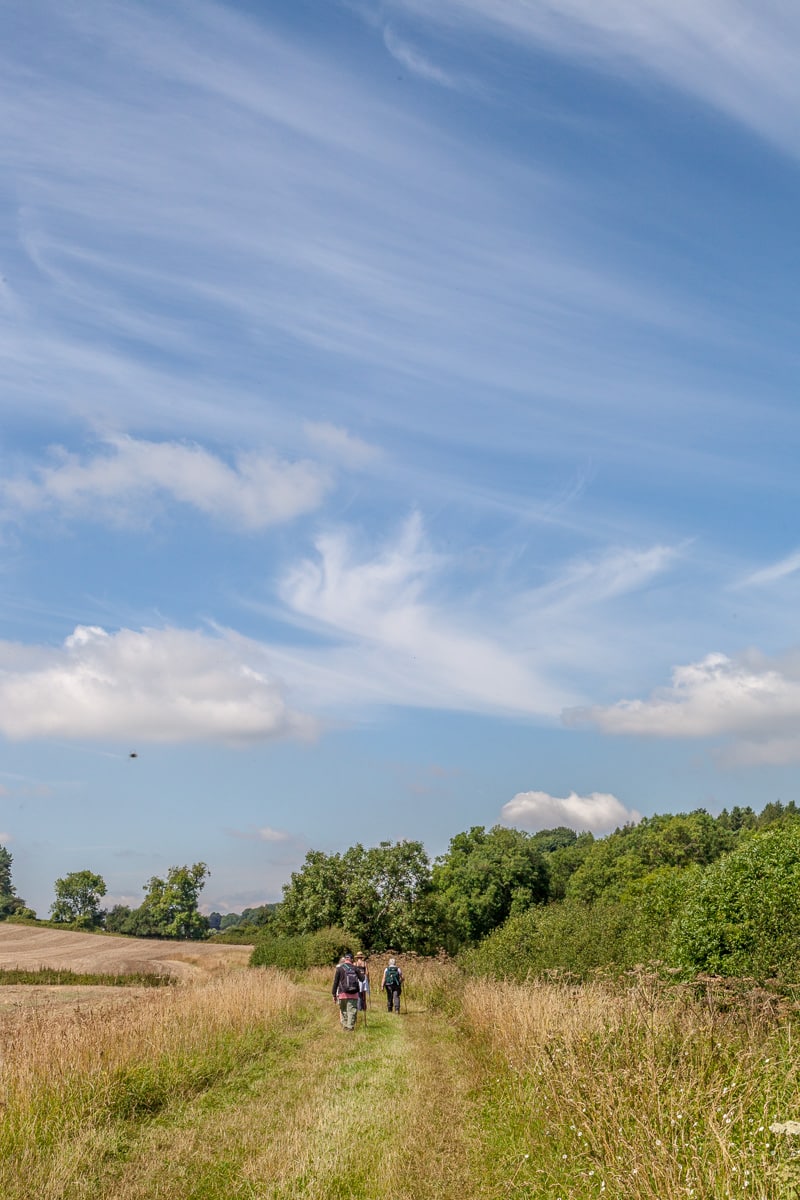 For our first walk, we chose a Wednesday morning walk, simply listed in the schedule as a Footpath Walk. Chris called Penny, the walk leader, and we learned this regular walk was essentially a maintenance walk to do minor repair work or to document complaints that had been received regarding one or more of the footpaths. This sounded interesting, so we told Penny that we would meet at the Stroud Leisure Center car park, the regular, designated starting point for all SRC walks. The assembled group would then carpool (with a nominal charge for the drivers) to the starting point of the walk. Parking in the various villages and countryside can be limited so filling each car cuts the number of cars driven, reduces problems finding adequate parking, and lessens impact on the environment. 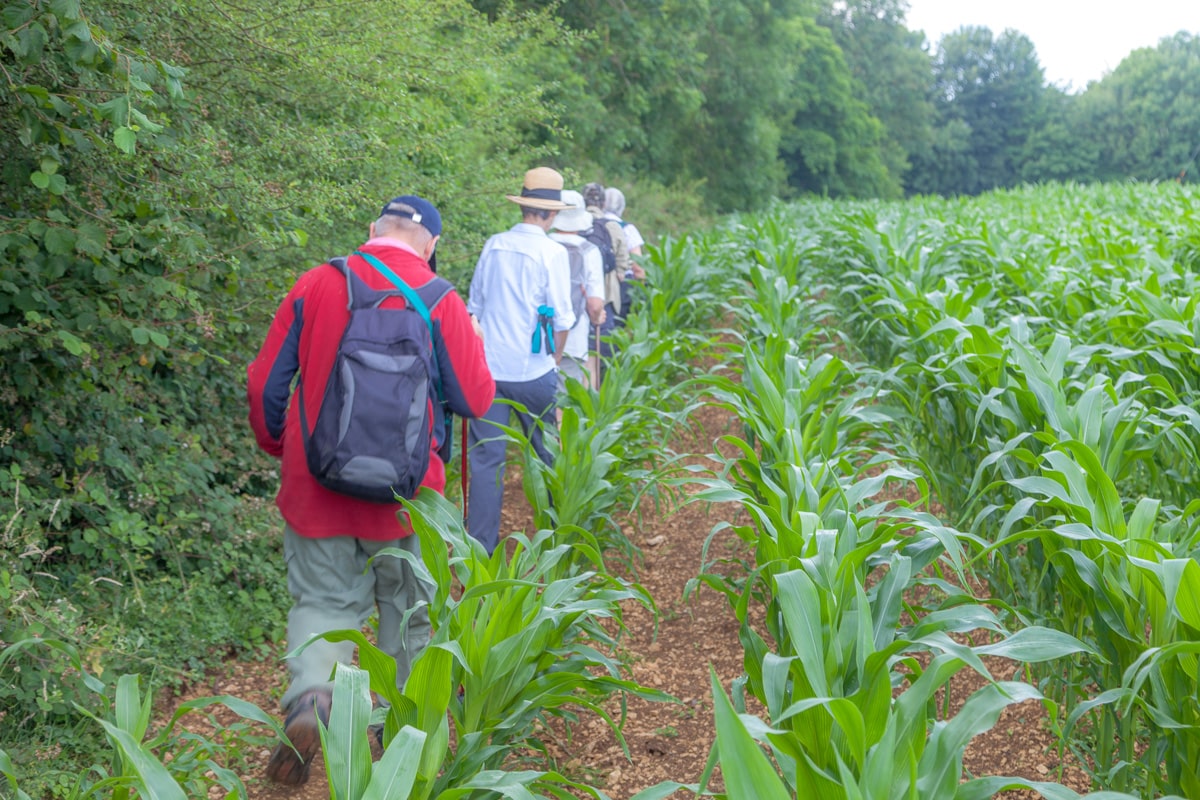 It was a short drive on narrow country lanes to the starting point. Penny gave us each clippers and other implements to carry so we were ready to do any path cleaning necessary. Over the course of the 4-mile walk, we found little to trim, no significant required repairs, and we had miles of good conversation. A highlight of the day was the sighting of a red kite (Milvus milvus), a forked-tail relative to our swallow-tailed kite.

At the end of the walk we stopped at a Foston’s Ash Inn, a country pub, for lunch. As we chatted with the other six walkers, they all had suggestions for places we should visit and areas to walk, and Penny jotted notes for us to refer in the weeks ahead. 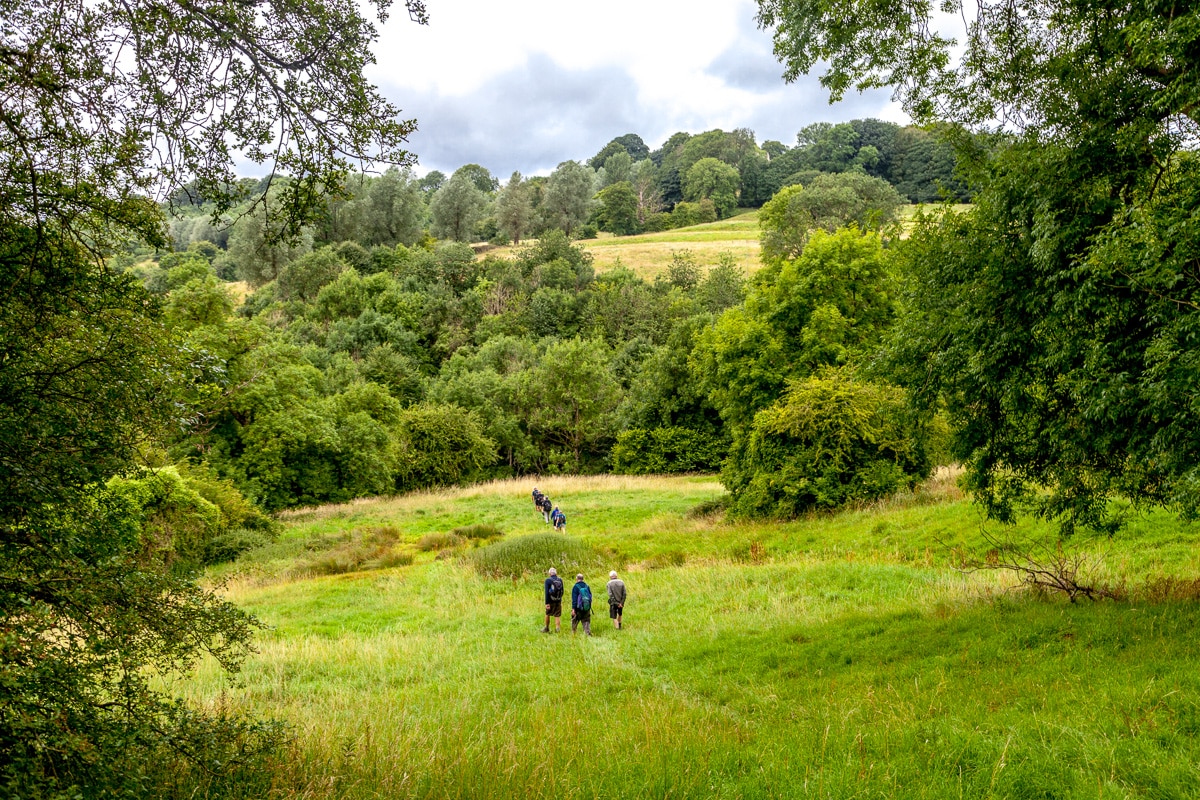 This was a great introduction to the SRC walking group, so in the following weeks, we joined them for a number of other walks over the rolling countryside. The footpaths crisscrossed pastures and fields, down old farm lanes and through woods; we traversed walls and fences over stiles of every type. We chatted with our new friends almost every step of the way, learning about the history of the area, both ancient and modern, and we all learned about each other, sharing our lives as we walked together. This was indeed the best part of the walks. 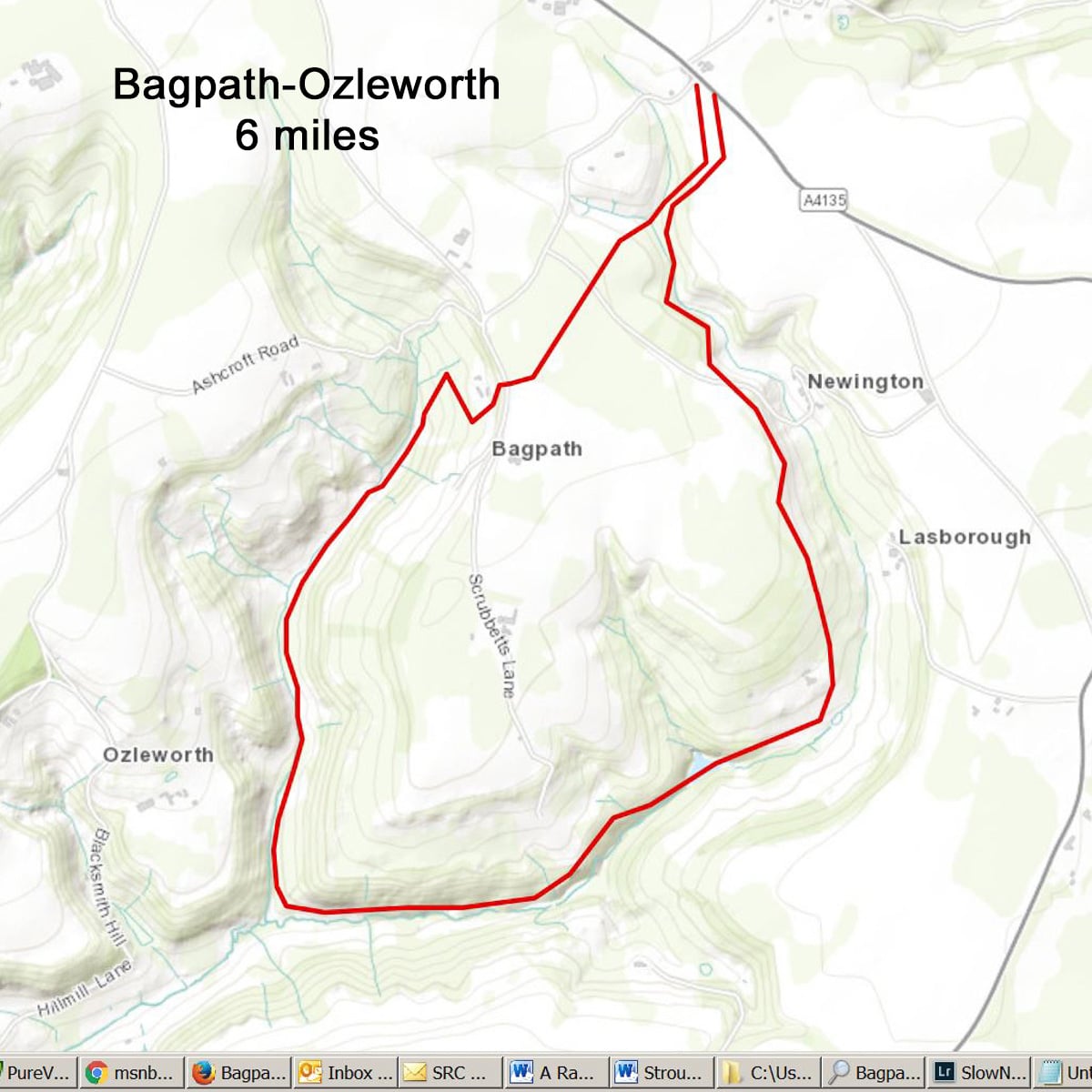 The wonderful Bagpath – Ozleworth 6-mile ramble was led by Allen on 27th July. It started and ended at Hunter’s Hall Inn, a 16th-century coaching inn near Kingscote, for lunch in their pub.. 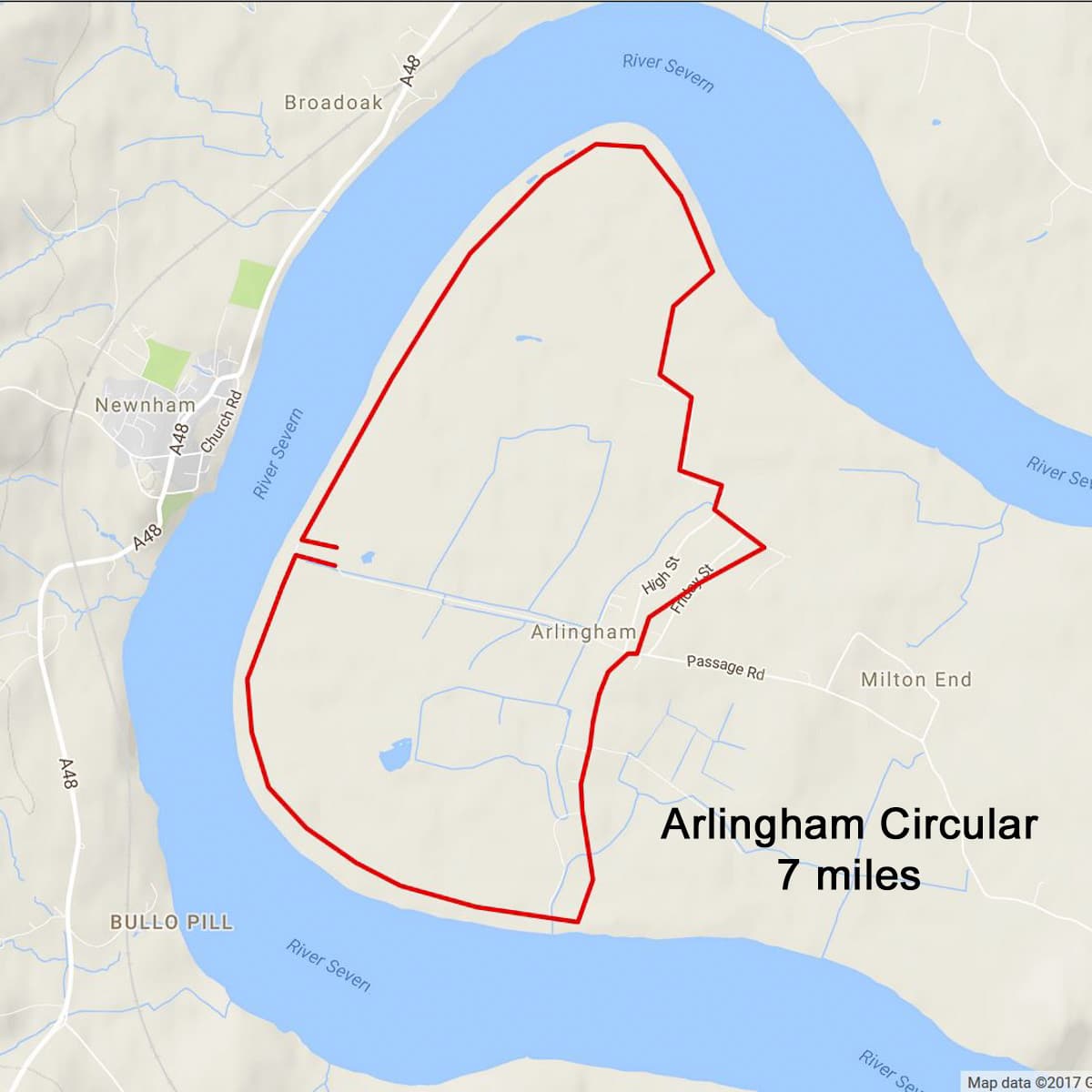 The 7-mile Arlingham Circular, was led by Trevor on August 13th and took us along the Severn River. The highlight of this stroll was the spotting of the Severn bore by Geoff. 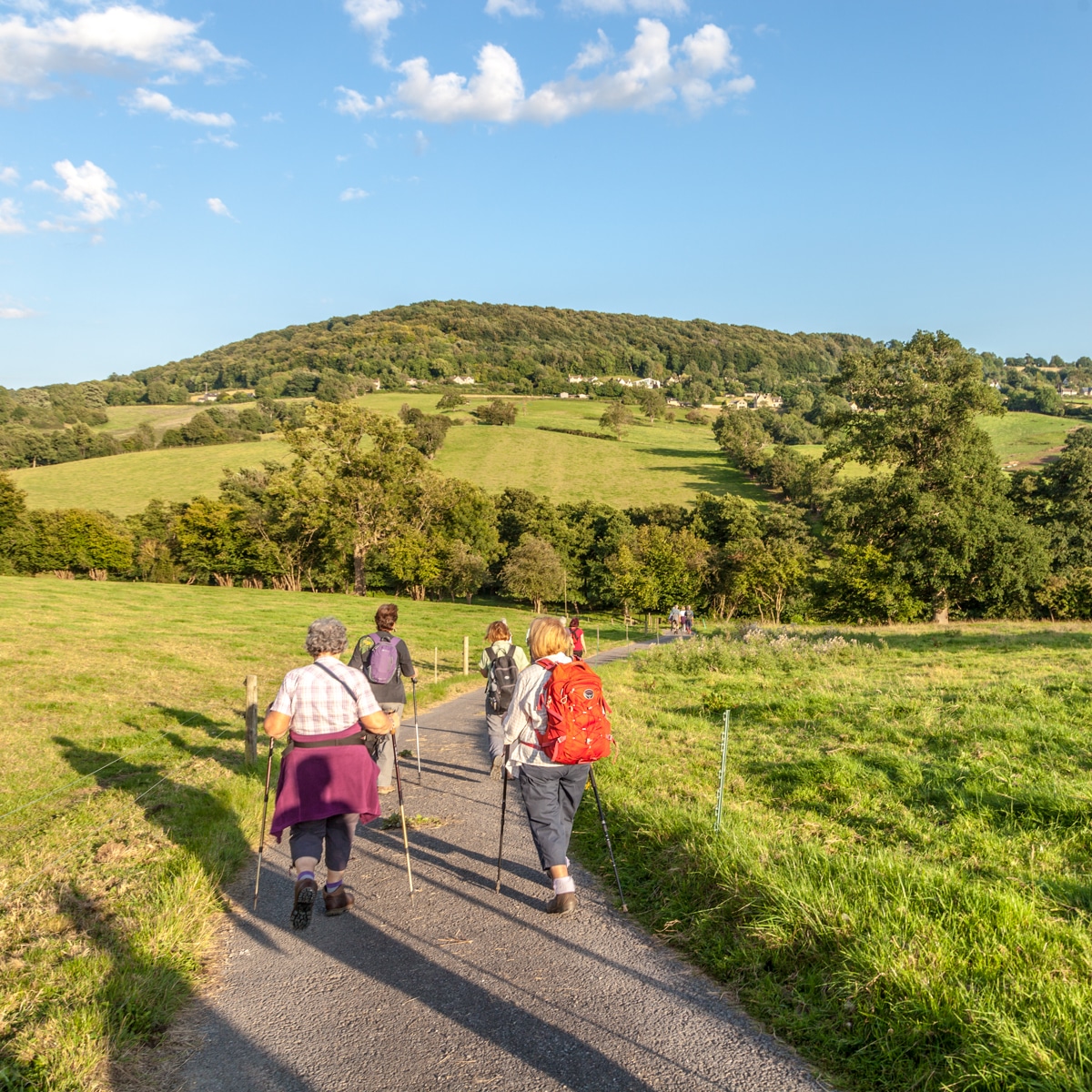 A walk on August 15th up to the Painswick Beacon was led by Geoff on a delightful Tuesday evening. After the 4-mile hike we stopped at the Royal Oak pub for refreshments before the drive back to Stroud. 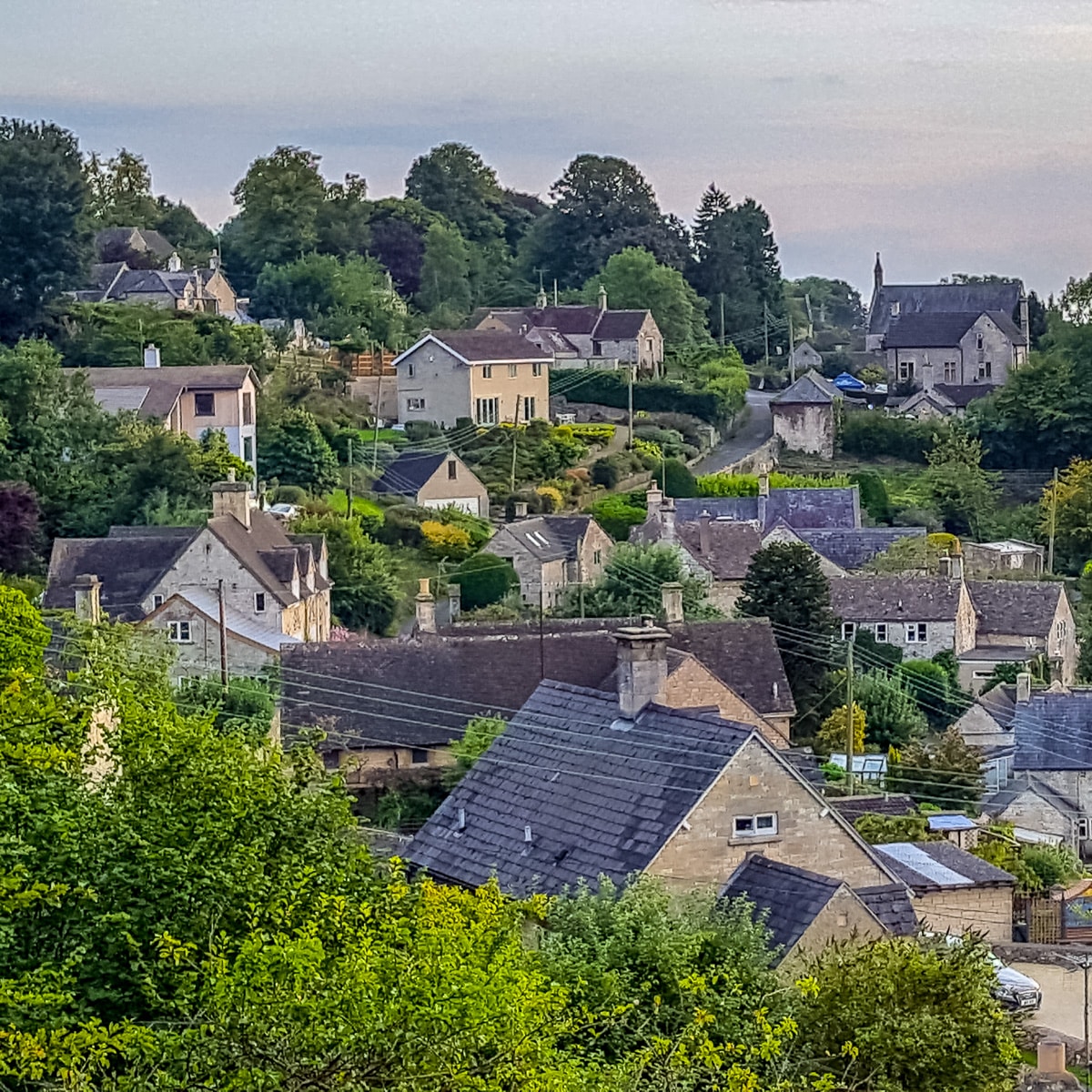 Another Tuesday evening walk of about four miles was also led by Geoff on the 22nd of August, took us over the countryside and through the small villages of France Lynch, Bisley and Eastcombe, ending with another pub stop at The Kings Head, a traditional English country pub, where we enjoyed the dark, beautiful evening sitting out in the garden.

The walk on August 27th was led by Hilary and included the historic Saperton-Edgeworth Canal. Although listed as a 9-mile walk, Jeannie’s pedometer registered almost 11 miles. We had all packed lunch and rested in the churchyard of the 13th and 14th century St Kenelm’s Church on this beautiful warm sunny day. This time we finished with a stop at the Jolly Nice Cafe for ice cream. 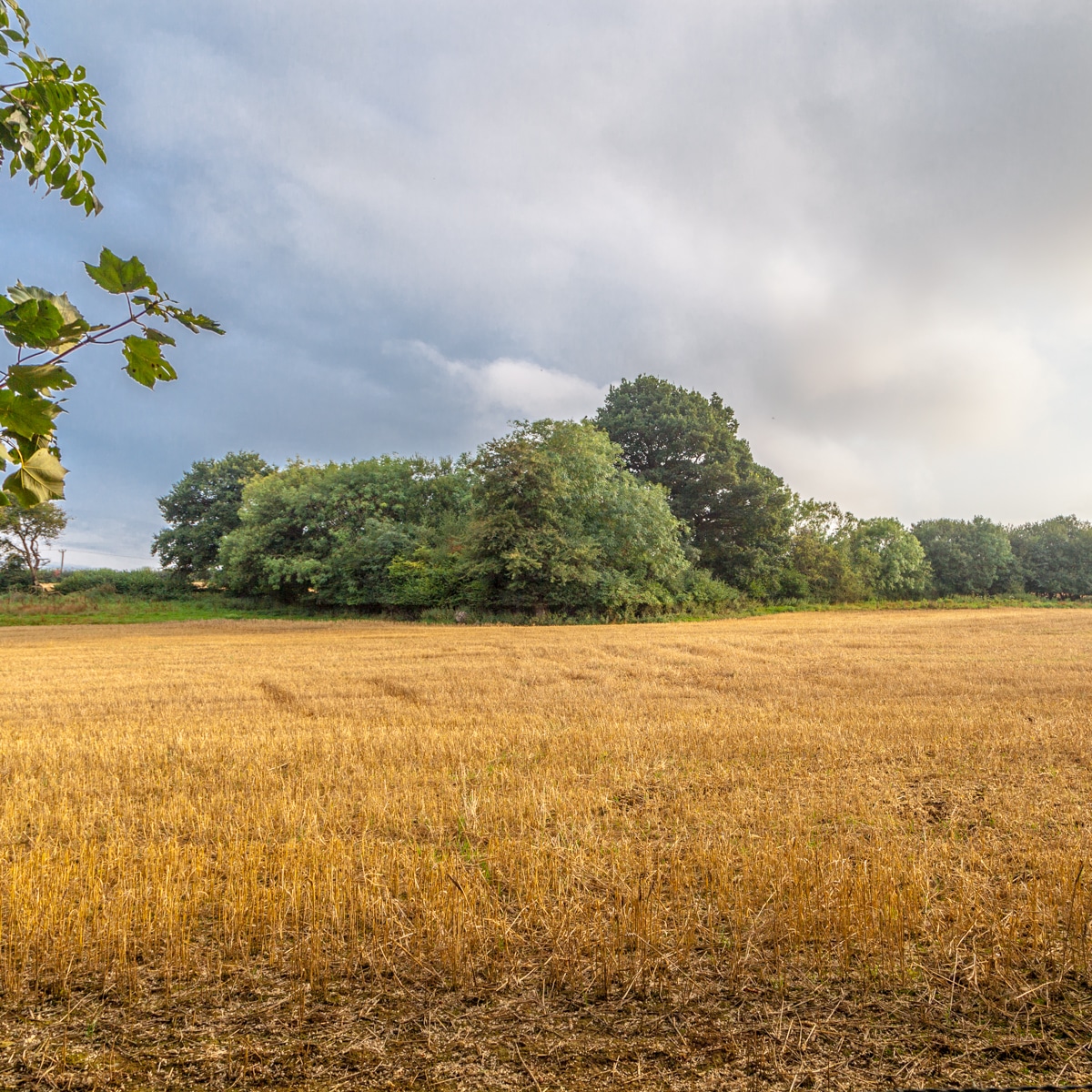 The lovely, August 29th four-mile, evening loop to Bisley – Sydenham’s Farm was again led by Geoff where our post-walk visit to The Stirrup Cup pub took us inside as the weather was becoming quite cool and breezy. 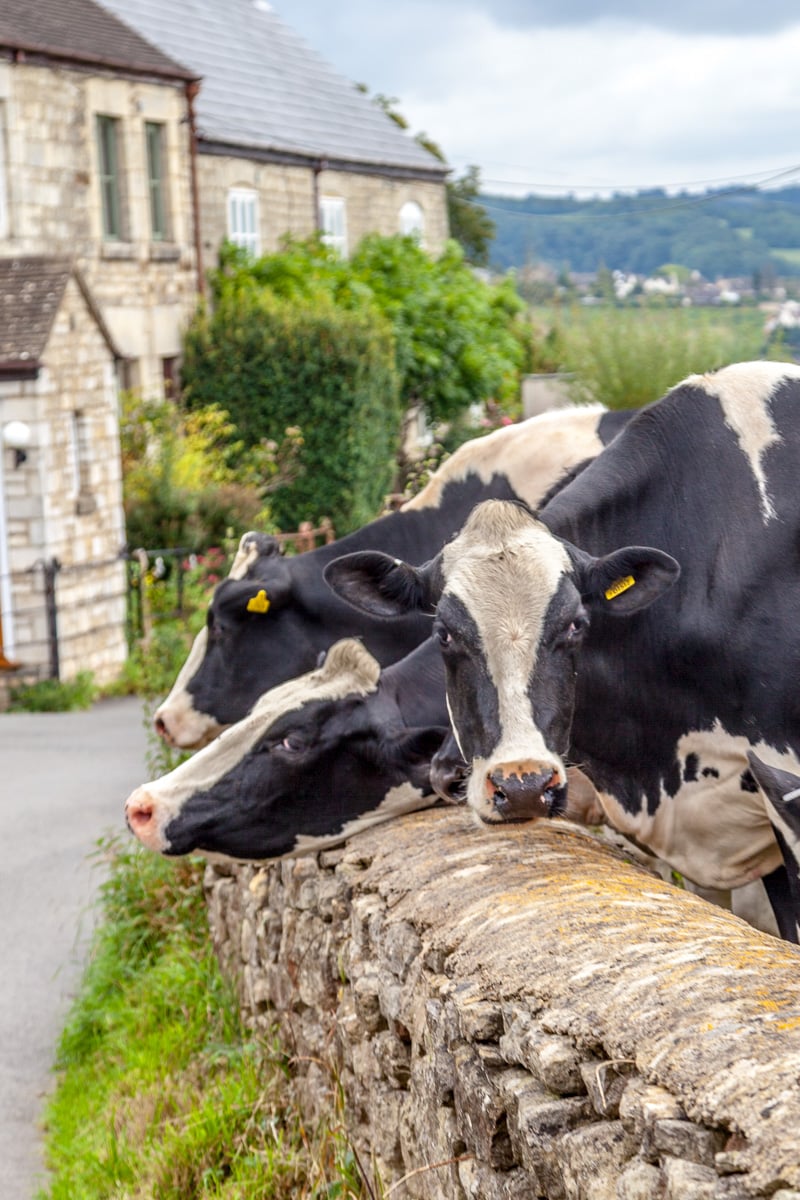 Another source for local walks we discovered in the local Selsley Community Group’s monthly brochure. One of their walks was led by Fran, a woman whom we had met along with her husband at the recent Cricket Club fundraiser. We joined them and another six or so locals on this walk that took us up hillsides covered with grapevines, across pastures, and down country lanes. 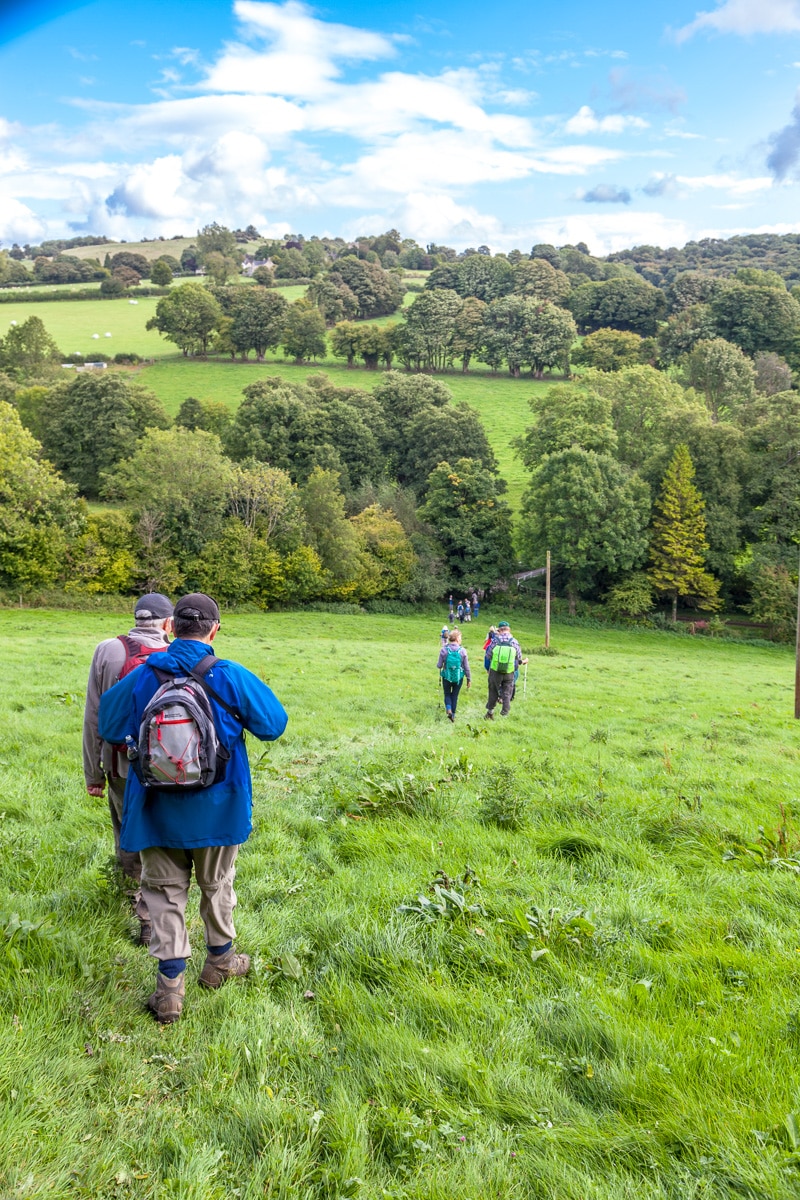 We also read about the guided Cotswold Voluntary Warden’s walks, and chose a 6-mile walk that left from the Seven Springs Inn outside Cheltenham. The footpath took us to Upper Coberley then along The Gloucestershire Way to Pegglesworth before returning along The Cotswold Way via Wistley Hill.

So many places to explore, and however long we were staying, there would never be enough time to see it all. Of all the wonderful things we did discover, the beauty of the area, and the friendliness of the people made our ramblings throughout the Cotswolds a series of memorable adventures.