August-October 2019 – Porto was a wonderful city, but there were too many sights to devote a post to each, so here is the first “six-pack” to highlight some of the sights, architecture, and history that Porto has to offer.

Cais da Ribeira and the Luís I Bridge 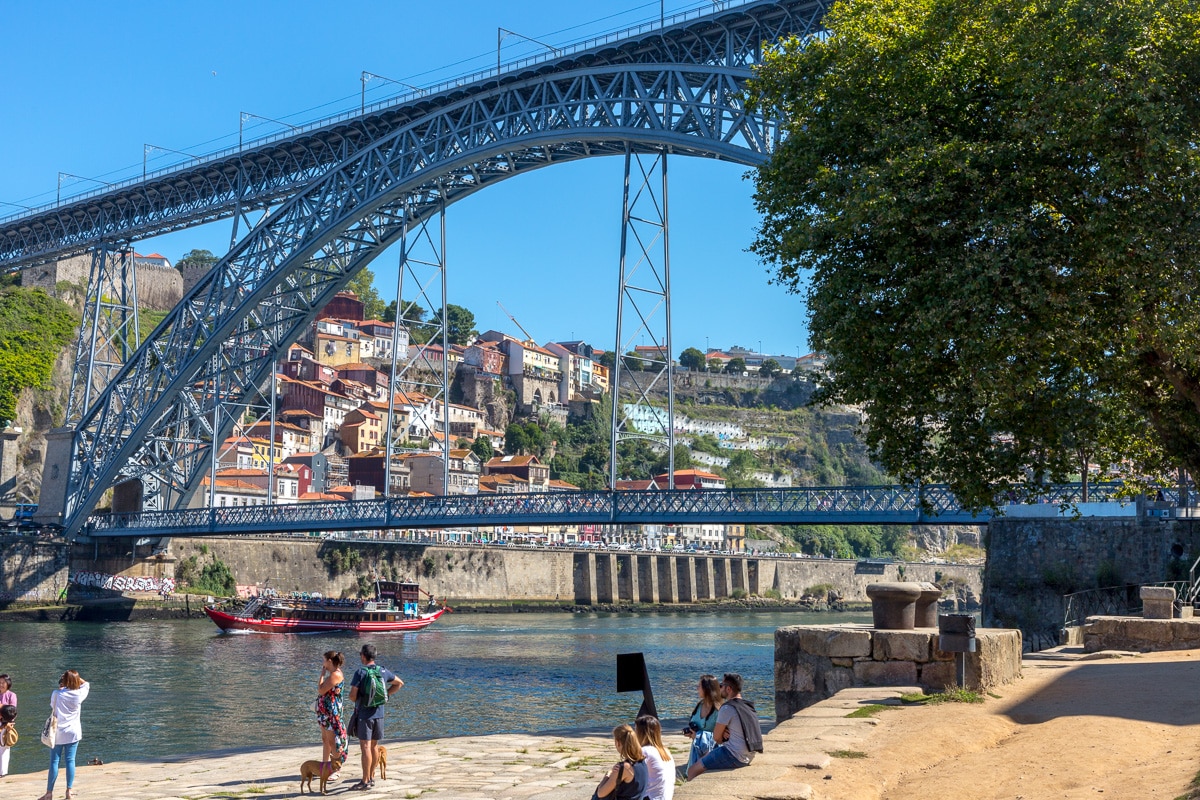 When we first arrived in Porto, we began our orientation by walking through town to the Rio Douro to the Cais da Ribeira or riverside pier. This riverside area is a chaotic, picturesque area lined with cafes, restaurants and shops overlooking the river and, on the opposite bank, the Port houses of Vila Nova de Gaia. All of the steep streets leading up and away from the river form a maze that weaves between the pastel-painted buildings.

Looming high above the Cais da Ribeira, the Ponte Dom Luis I bridge links Porto with Vila Nova de Gaia over the Douro River. An iconic industrial symbol of Porto, the twin-level bridge carries metro trains on its top level and local road traffic below. Pedestrians can cross on both levels and the views from the 60 m (196 ft) high top deck are spectacular.

The metal, arched bridge opened in 1886 and was designed by a student of Gustave Eiffel, of Eiffel Tower in Paris fame. 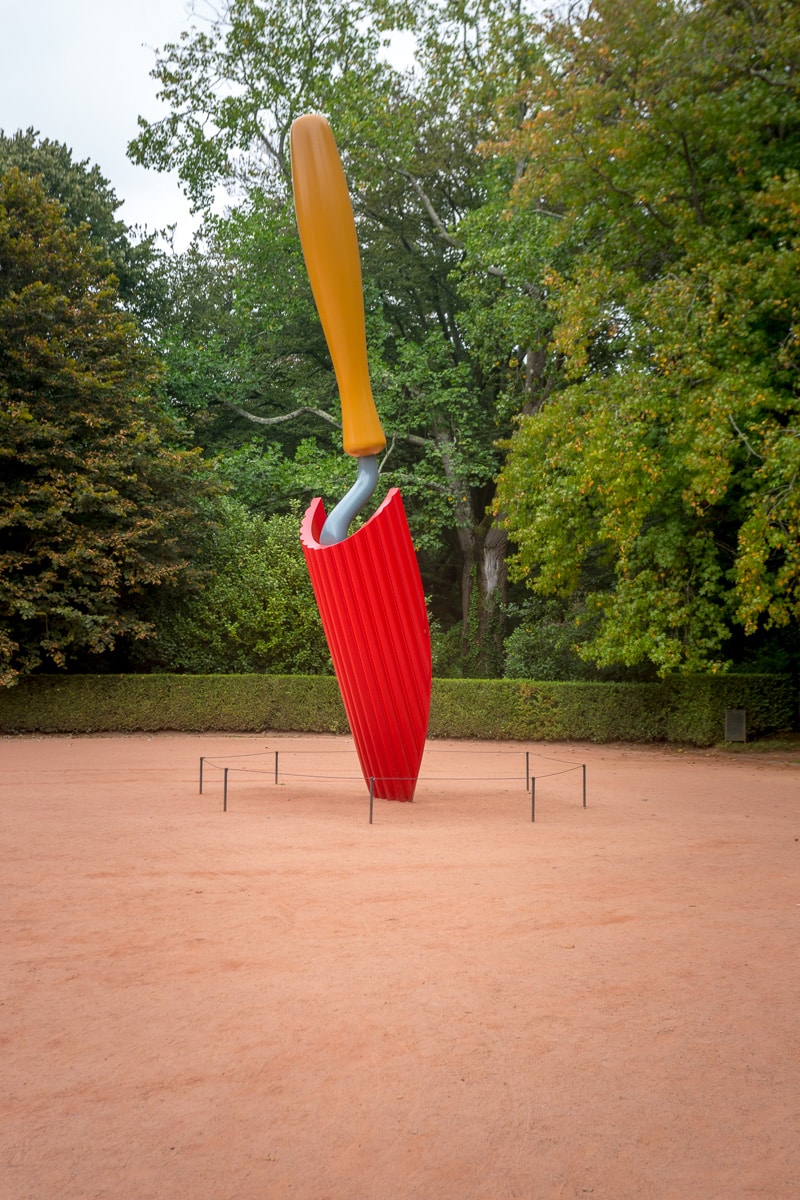 The Fundação de Serralves comprises a contemporary art museum, a park and gardens, and a villa all set on nearly 18 hectares (45 acres) of land in western Porto.

The Serralves Museum or Museu de Arte Contemporânea, opened in 1999 and boasts 14 exhibition galleries across three floors. Its permanent collection features works from the late 1960s to the present, with multiple high-profile temporary exhibitions.

Then there is the villa, Casa de Serralves, considered the best example of art deco architecture in Portugal. Inside the villa, which was originally a private residence,  temporary art exhibits are hosted throughout the year. 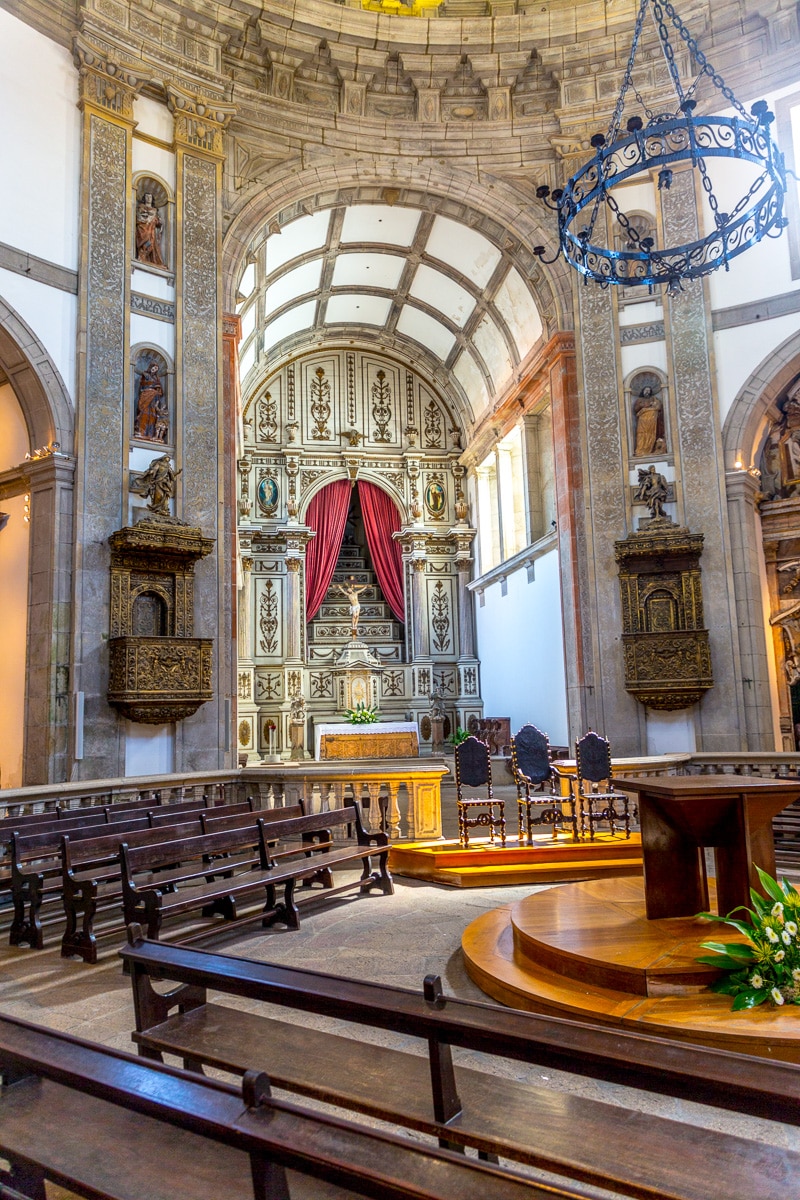 Situated high above the south side of the Rio Douro, the 36 m (118 ft) Church of Serra do Pilar dominates the skyline. The unique design of the Monastery of Serra do Pilar’s was influenced by both Renaissance and Mannerist styles. The church and its cloister are both circular with identical diameters, but circular cloisters are rather rare.

In 1947 most of the monastery grounds were converted into a military barracks, and is still used by the Portuguese army. This became apparent when, as part of our tour of the church, we were escorted by our guide through a stone hallway to go up to the roof. At this point, we were met by a soldier in uniform who led us up the tight spiral staircase to the terrace that encircles the domed cupola where we enjoyed the spectacular, 360° view over the Douro River, the Dom Luis I bridge, and Porto. 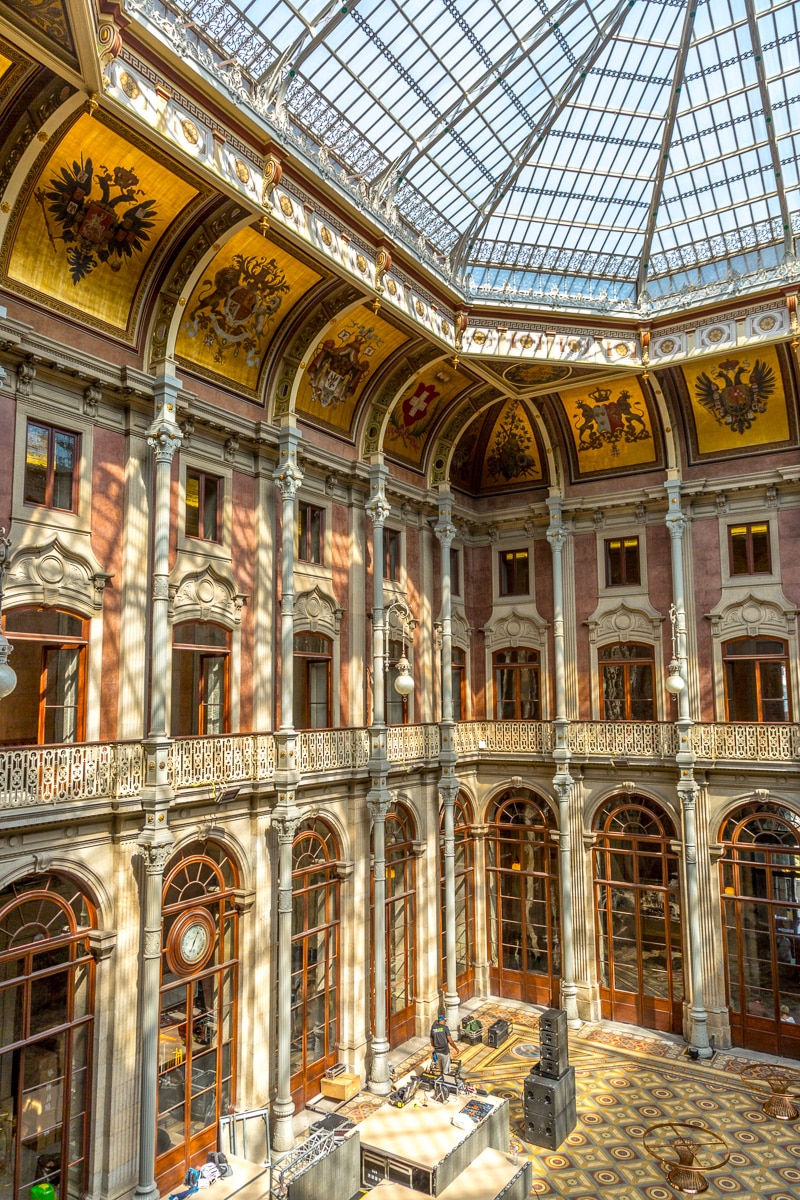 Porto’s old stock exchange is one of the most-visited sites in Porto. It was built next to the Church of São Francisco after its cloisters burned down during the Siege of Porto in 1832. The exterior has a Neoclassical design, while the interiors were embellished right up to the start of the 20th century.

We took a tour of the interior with a guide and were impressed by the octagonal, glass-domed Pátio das Nações (Hall of Nations) and many of the other richly decorated rooms. However, the Moorish Revival Salão Árabe, was the most notable. It is a stupendous ballroom with stucco walls filled with complex Moorish designs, then gilded with 18kg (almost 40 lbs) of gold, and a intricate parquet floor made from exotic woods such as mahogany, rosewood, satinwood, rosewood and maple.

This massive building was used to influence European bankers and investors alike with the richness of its sculptures, decorative carvings, plasterwork, frescos, chandeliers and tiles. 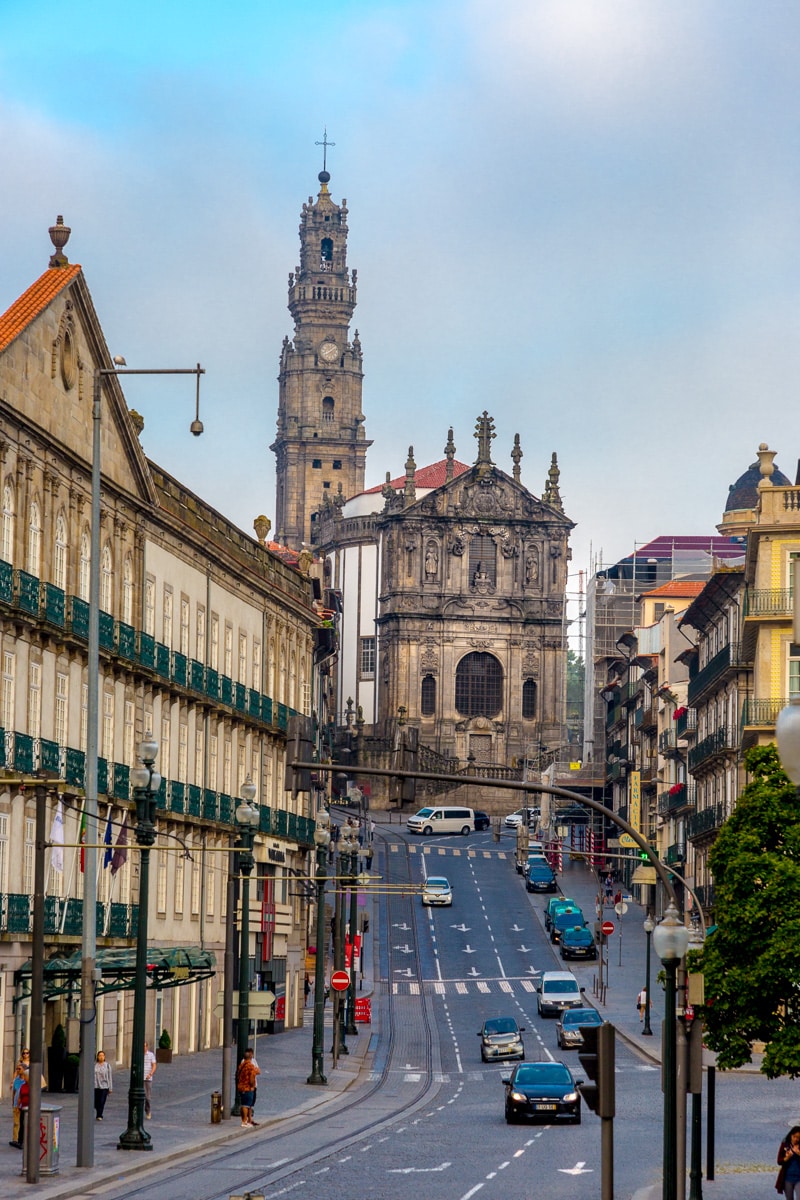 The Igreja dos Clérigos was begun in 1732 and completed in the 1750’s, with its monumental stairway in front of the church finished later in the decade. In typical Baroque style, the main façade of the church is decorated with motifs of garlands and shells.

The interior of the church has an unusual oval floor-plan and is lavishly decorated with gilt woodwork, and the main chapel’s beautiful Rococo altarpiece with fabricated in four-color marble.

The 75.6 m (249 ft) high tower of this Baroque church is a beautiful monument that dates to 1763 and can be spotted from most parts of Porto and was the tallest building in the country when it was completed.

You can climb the tower, as we did, and the 240 steps will lead you to a full 360 degree view from the narrow observation deck, but the view at the top is quite spectacular. 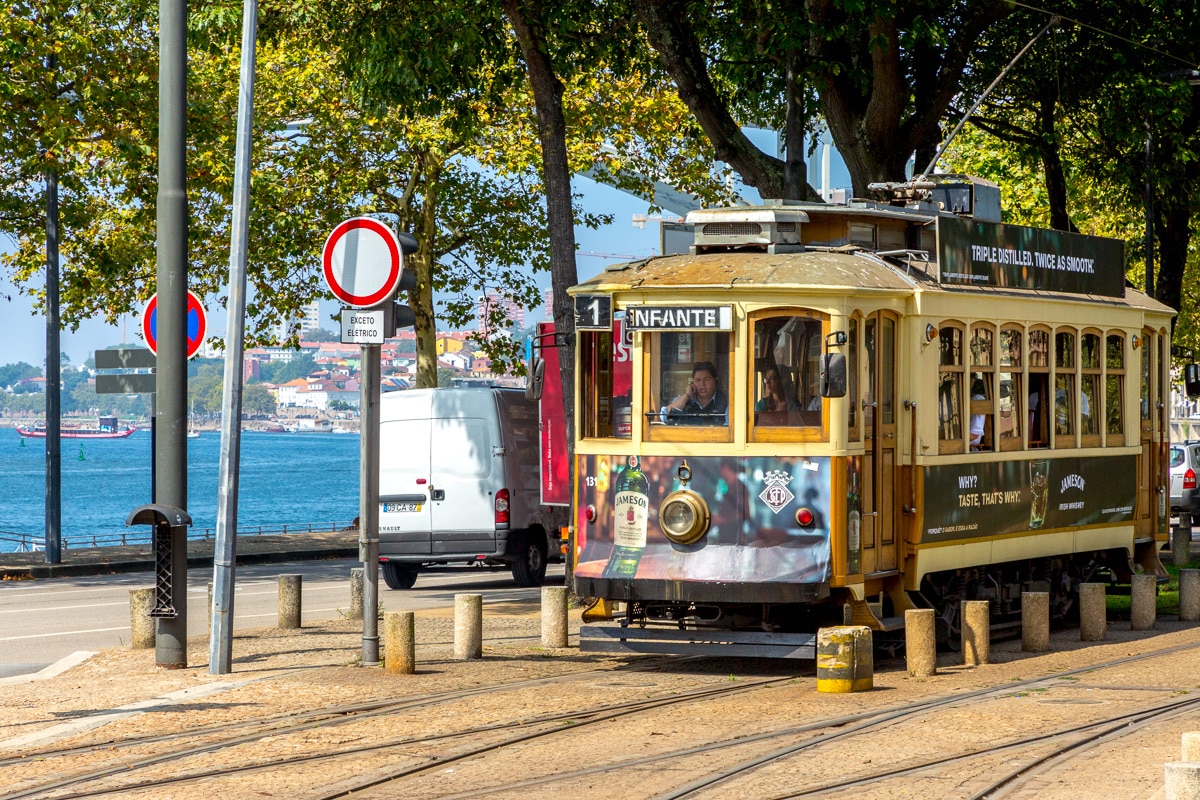 We were out wandering along the north side of the Douro river and happened across this Museum, housed in the old central power plant of the tram system. Dozens of beautifully restored old trams are displayed – from early 1870s models once pulled by mules to streamlined, bee-yellow 1930s numbers to “modern” trams that date back to the 1950’s and 1960’s. The control room of the power plant has been nicely restored to its former technological glory.