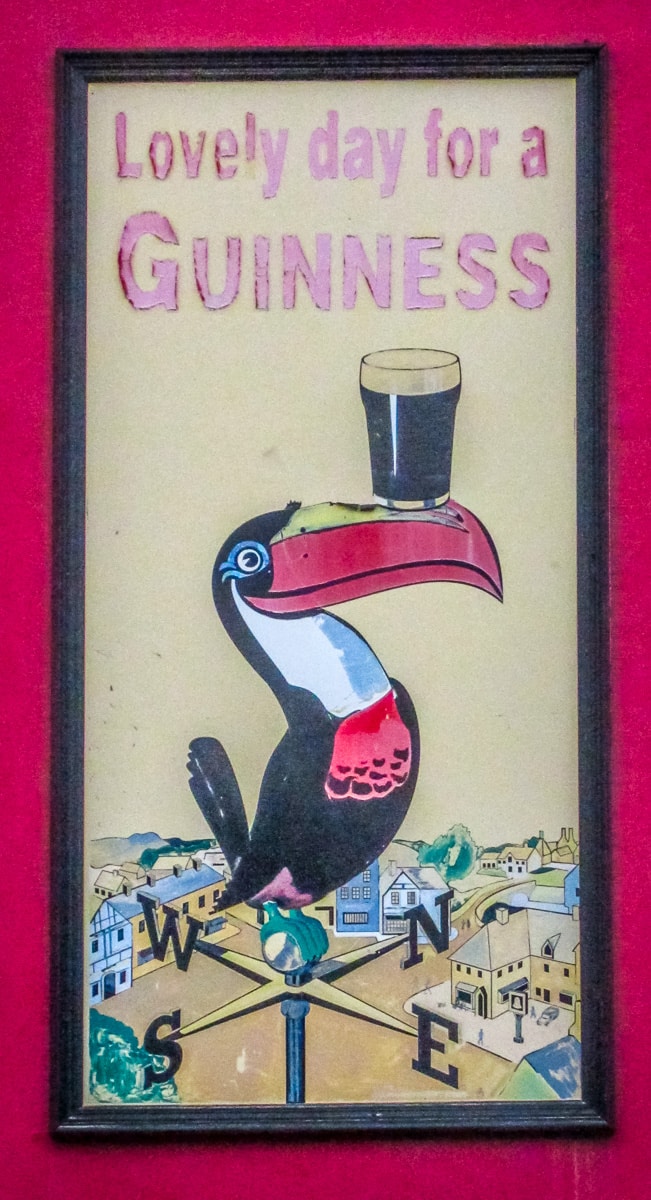 As we were thinking about where to go for the nine days after Killarney and before returning to Dublin, we knew we wanted to see the Cliffs of Moher. The decision to stay in Doolin then, was easy since it was nearby. However, when we discussed our plans with some friends and Killarney locals, we really didn’t know that the other, and maybe the best reason for going to Doolin was for the music, Irish traditional music to be exact.

Up until the latter part of the last century, the area around Doolin was Gaeltacht, or a primarily Irish-speaking region, and music, song, dance and story-telling was always an integral part of this community.

The 1960s and 70s saw a revival in folk music of all types, and since much of American folk music grew out of the traditional music of the British Isles, part of the spotlight fell on Ireland. There, an earlier generation of musicians from Doolin brought international attention to the traditional Irish folk music. Most notable of these were the Russell brothers Micho, Gussie and Pakie. Their fame, along with the Cliffs of Moher and the Burren, helped make this small fishing village a place where musicians and travelers from all over the world would come to experience a living musical heritage.

After we returned from our Cliff hike we stopped for a late lunch in Gus O’Connor’s Pub, just across the road from the Sea View House, our base in Doolin. After eating, we asked about what time the music would start and where the best location would be to sit.

Since it was Sunday, the “trad session” would start early, about 6:30 or so. 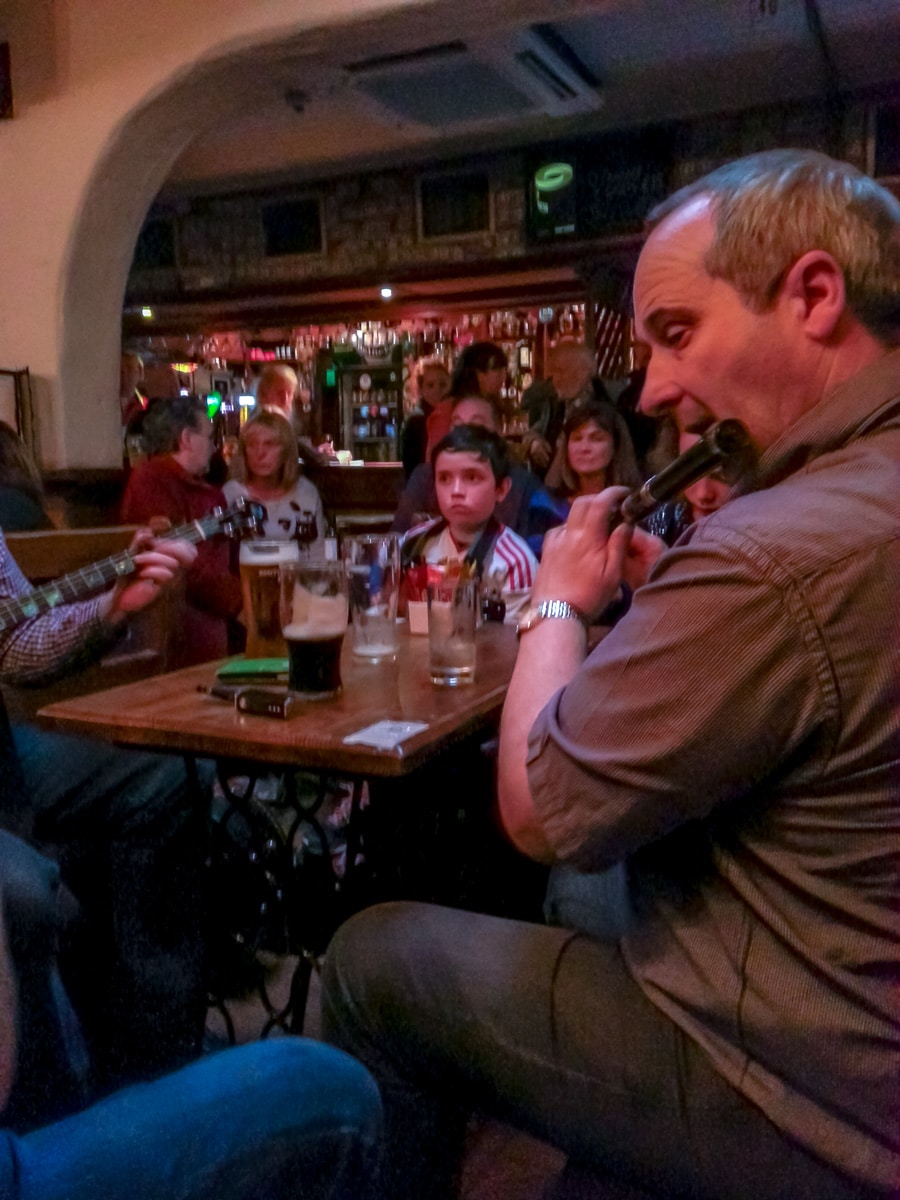 A “trad session” is an informal gathering of traditional musicians. It is unrehearsed as each one is made up of different players. The players all have a common repertoire of tunes that is based in a common key. The tunes are usually grouped into sets of two or more tunes with changes often preceded by a nod and/or a wink.

We arrived in time to get a table right next to the performer’s area, and ordered our drinks.  I had a Guinness while Jeannie had a glass of wine as we eagerly watched the musicians come in and unpack their instruments. They ranged in age from older-than-us to 12-15 years old. 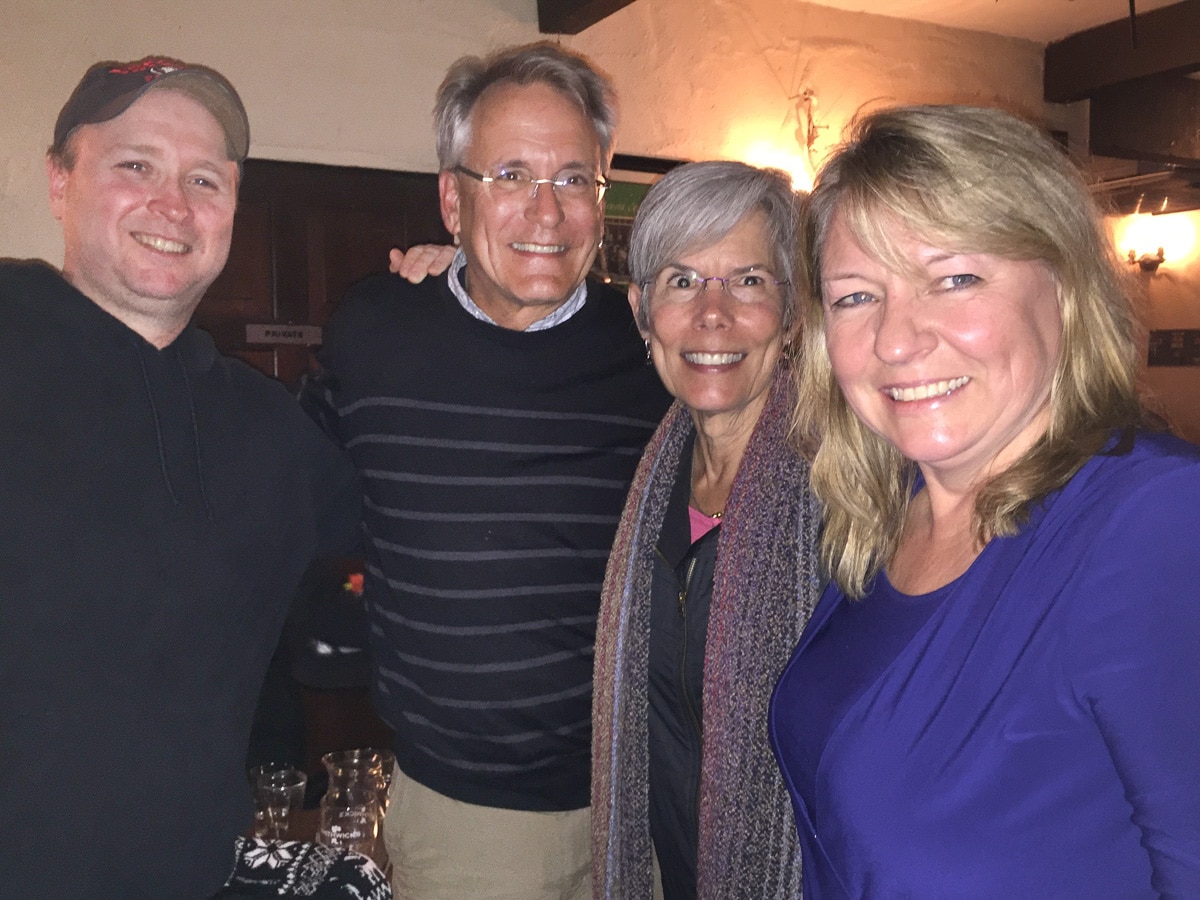 Here, the sessions are a community affair and clearly for the locals, but tourists are welcomed, and as it was early, there were several families with children. There was no doubt that even if there were no tourists at all the sessions would go on.

As we waited, Melissa and Shaun, fellow hikers from the Cliff walk came in and sat with us to enjoy the music as well. We were not to be disappointed.

After a couple of jigs and reels, an elderly one-legged gentleman got up and sang a birthday song to an elderly neighbor who was there with her family.

Since we were sitting next to the musicians, we enjoyed watching the interaction between each of players. It was especially interesting watching the way the older performers worked with the two youngsters, not with any words for the most part, but rather with looks, winks, nods, and smiles as everyone worked together to make the music.

At one point, after another couple of pieces, several of the group went to get drinks or a bite. A woman brought her two very young daughters to the performer’s area and sat down. She coached them for a short while as the others shushed the crowd. Then with tiny angelic voices they sang a cute tune together, with mom’s encouragement along the way.

As the evening wore on more musicians came and joined in. The families started to filter out as bedtime approached for the little ones, and other patrons moved in to take their places. And the music continued.

After still more great music, a couple more Guinnesses, and delightful conversation with new friends, we too had to return to our B&B to turn in. It had been a busy day. 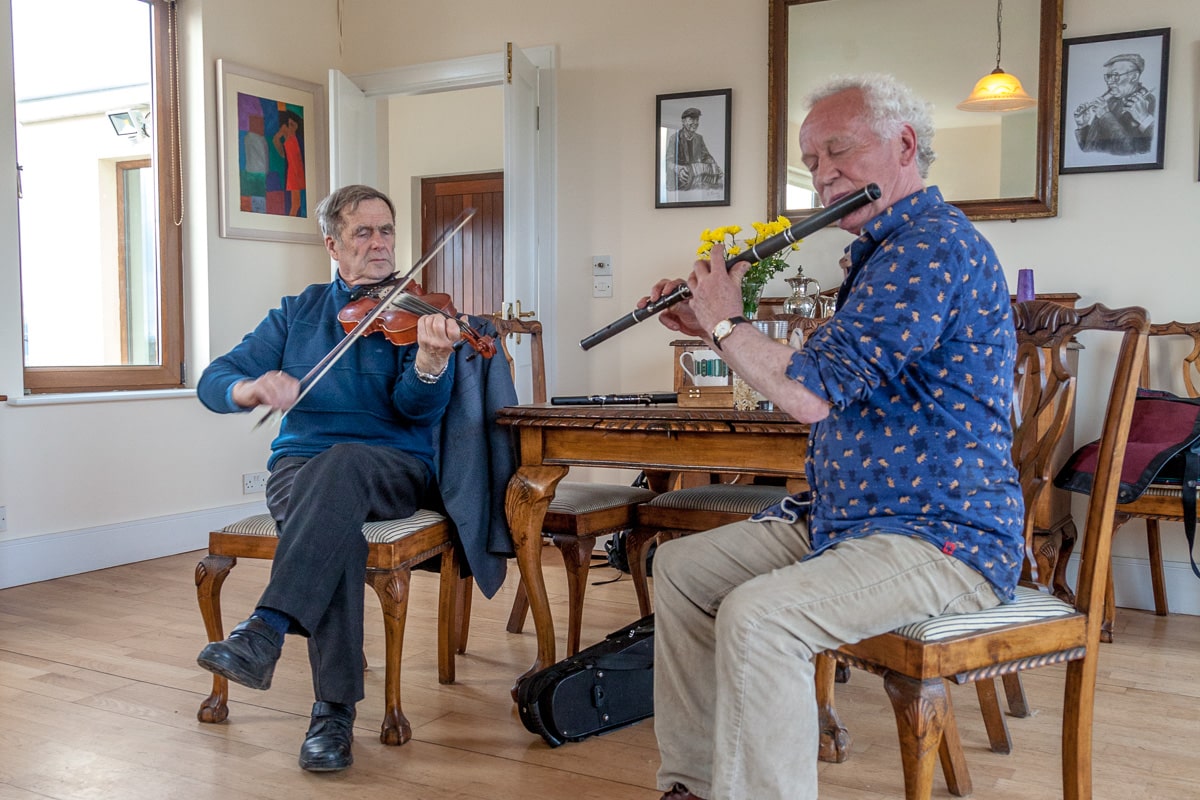 The next evening, after our trip to the Burren, we had arranged to go to the Doolin Music House, the private residence of Christy Barry and his partner Sheila for an evening of music and stories by their fire. 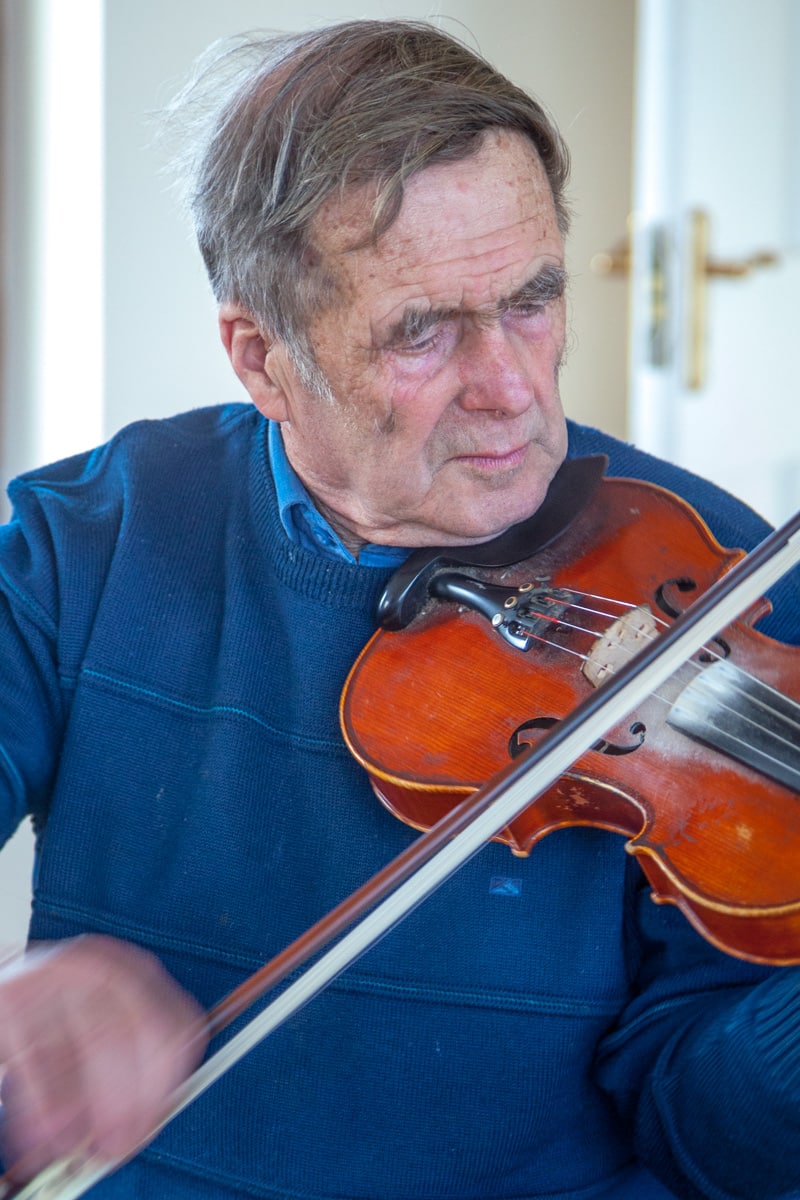 We were part of a very small group of six that evening, and were especially fortunate to hear Christy and Michael Kelleher, two musical legends in their own right, play and talk extensively about the history and personalities of the traditional music scene in Doolin.

The music and conversation could have gone on and on, but Christy and Michael were expected at O’Connor’s Pub by 9:30 for tonight’s session, … and yes, we would be going.

Another trad session sample from O’Connor’s (2:56)

By the time we arrived at the pub, Christy, Michael and several other musicians were just about set up. We went over and greeted them to thank them again for the great time earlier. It was rather exciting that we knew some members of the band, … ha ha ha, groupies.

Still another sample from O’Connor’s Pub (2:16)

Later still, an older gentleman sat in with his harmonica, and began playing a slow, melancholic tune that about half-way through picked up nicely.

The music continued to flow as freely as the Guinness, and it still wasn’t over as we left to turn in for the evening, well after the posted closing time. 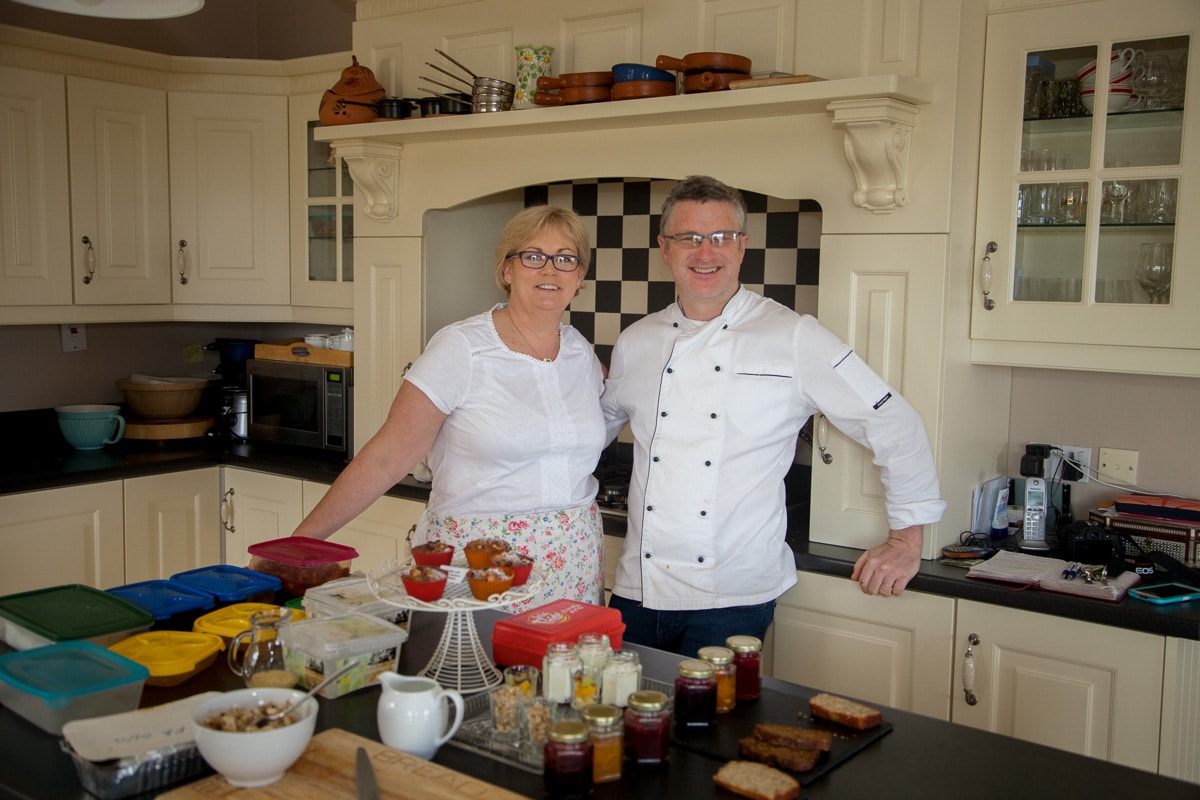 The following day after another spectacular breakfast, our feet were still tapping as we said our goodbyes to Darra and Niall at the Sea View House and departed Doolin, . It was time to move on to Kinnitty where another unique musical experience awaited.

(Note: There were not many photos taken for a variety of reasons – poor lighting, and Guinness were two, but the most important was that I was having too good a time. Besides the music is the point, eh?)