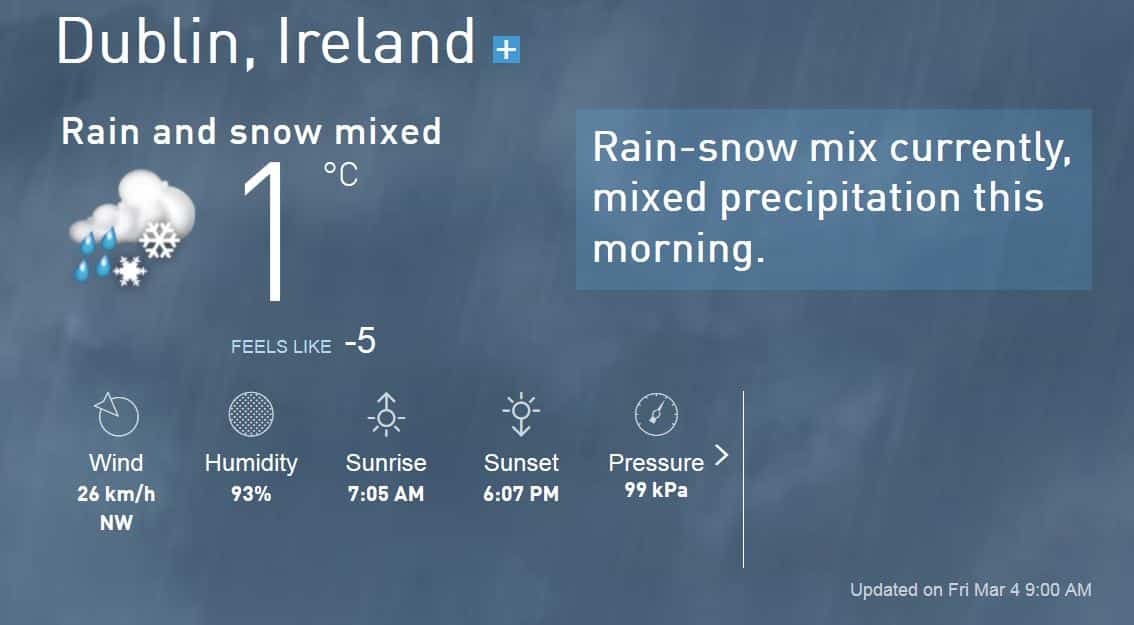 The flight to Dublin was cramped but uneventful. Once we arrived at our apartment it wasn’t quite ready from the previous tenants, so we deposited our luggage and went for a long stroll.

Dublin was cold, rainy, windy, and wonderful. It’s a big city, crowded and bustling, yet charming and friendly. Over the next few days it was not only cold, rainy, and windy, but also sunny and it even snowed one morning. The weather can be rather changeable. 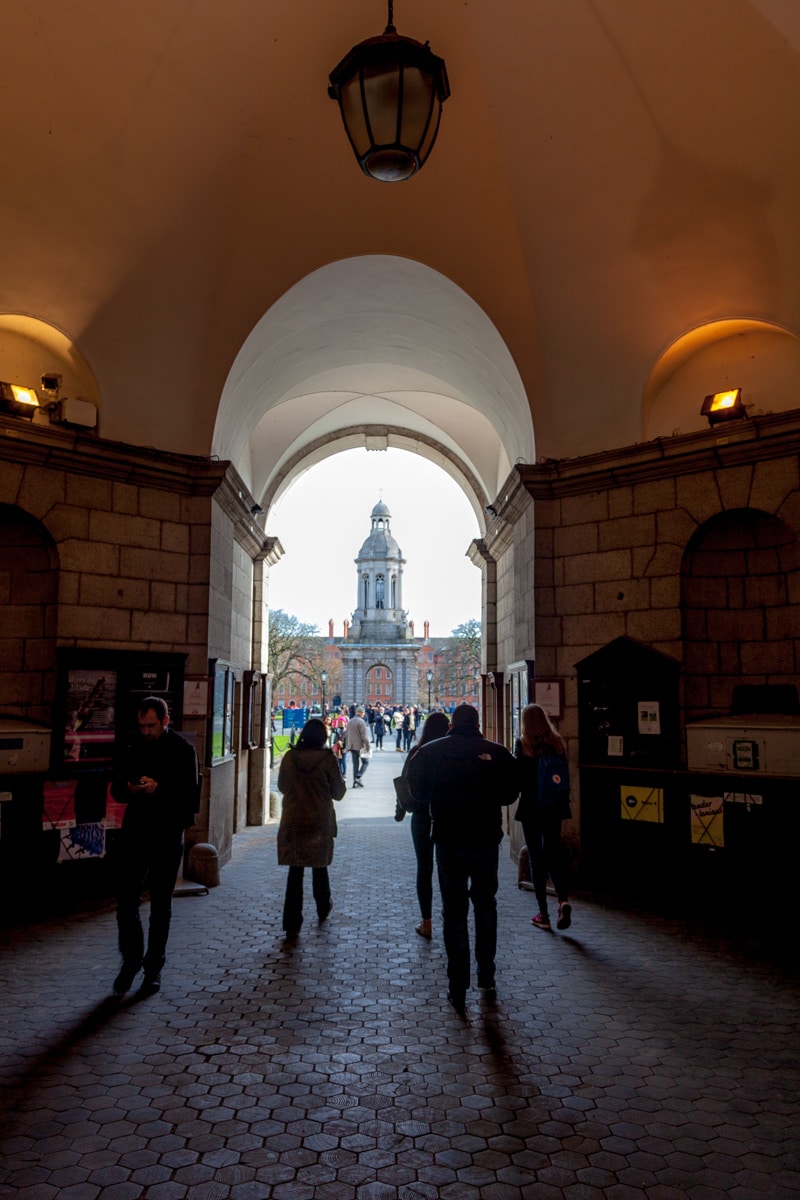 We first wandered over the River Liffey to Trinity College, founded in 1592. Situated in the center of old Dublin, it houses the Book of Kells, a beautifully illuminated manuscript of the four Gospels of the New Testament created c.800 AD. The exhibits surrounding the manuscript were very well done, explaining not only the history of the Book of Kells and much of its graphic symbolism but also the skills of the artisans who created the book.

Equally fascinating was the 65 m (~215 ft) long Old Library Long Room which houses 200,000 of the library’s oldest books in its oak bookcases. The smell of old books standing upright in the stacks brought back pleasant memories of graduate school when I would roam the aisles in search of some specific journal or treatise. 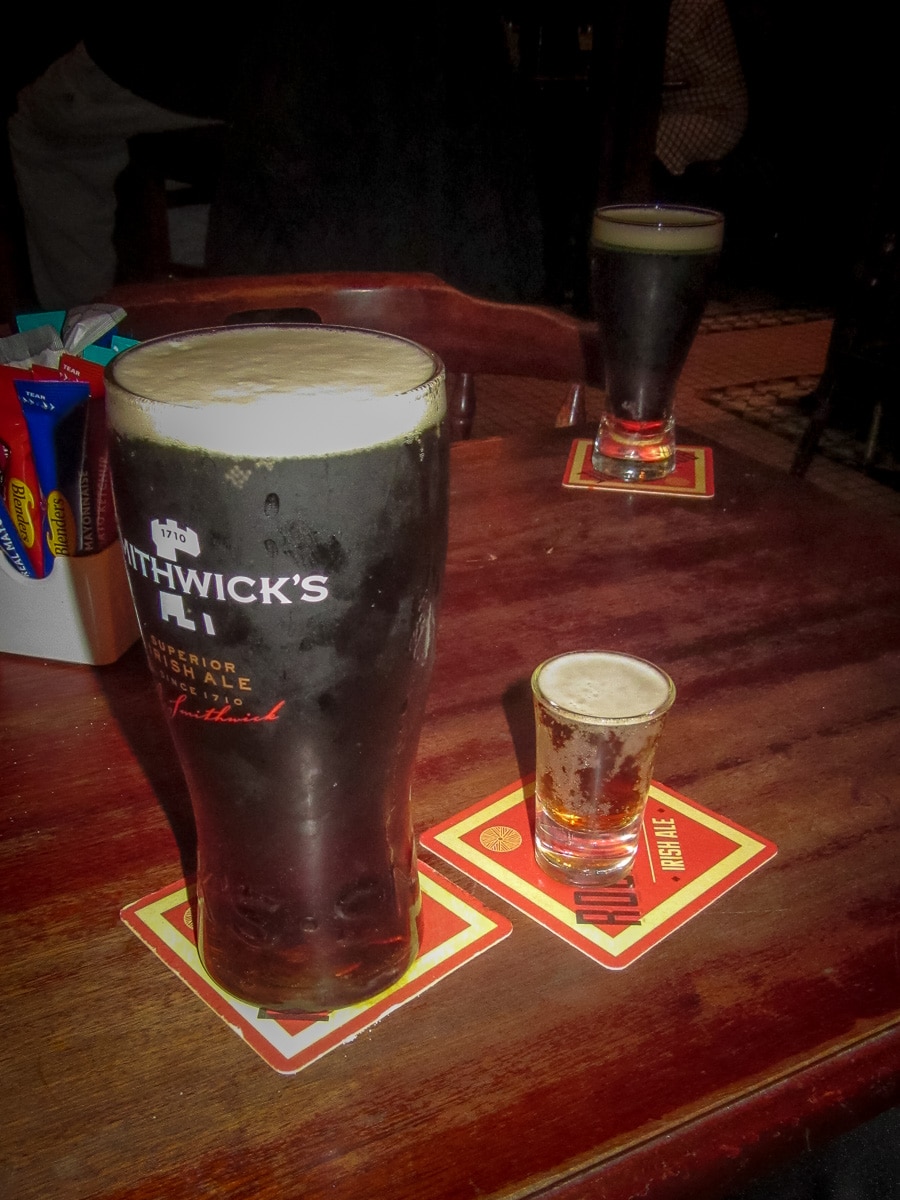 Later that evening we stopped by Madigan’s, a small local pub for dinner. I ordered a pint of Smithwick’s (pronounced Smith-icks) and Jeannie specifically requested the same but very small, as she isn’t a big fan of beer. Just a minute later the barkeep brought over my pint and for Jeannie, a shot glass filled with beer. The barkeep, with an authentic Irish twinkle in his eye, explained that this was the smallest he had. After a very big laugh, he brought her a half-pint.

The following morning the wind was whipping the cold air around under a sullen gray sky as we took off on a self-guided, walking tour of old Dublin. After a while, we stopped at a small cafe for lunch where we warmed ourselves with some hot soup before continuing on. Later we stopped by “Fallon and Byrne”, a well-known food hall to pick up some dinner to prepare in the apartment. 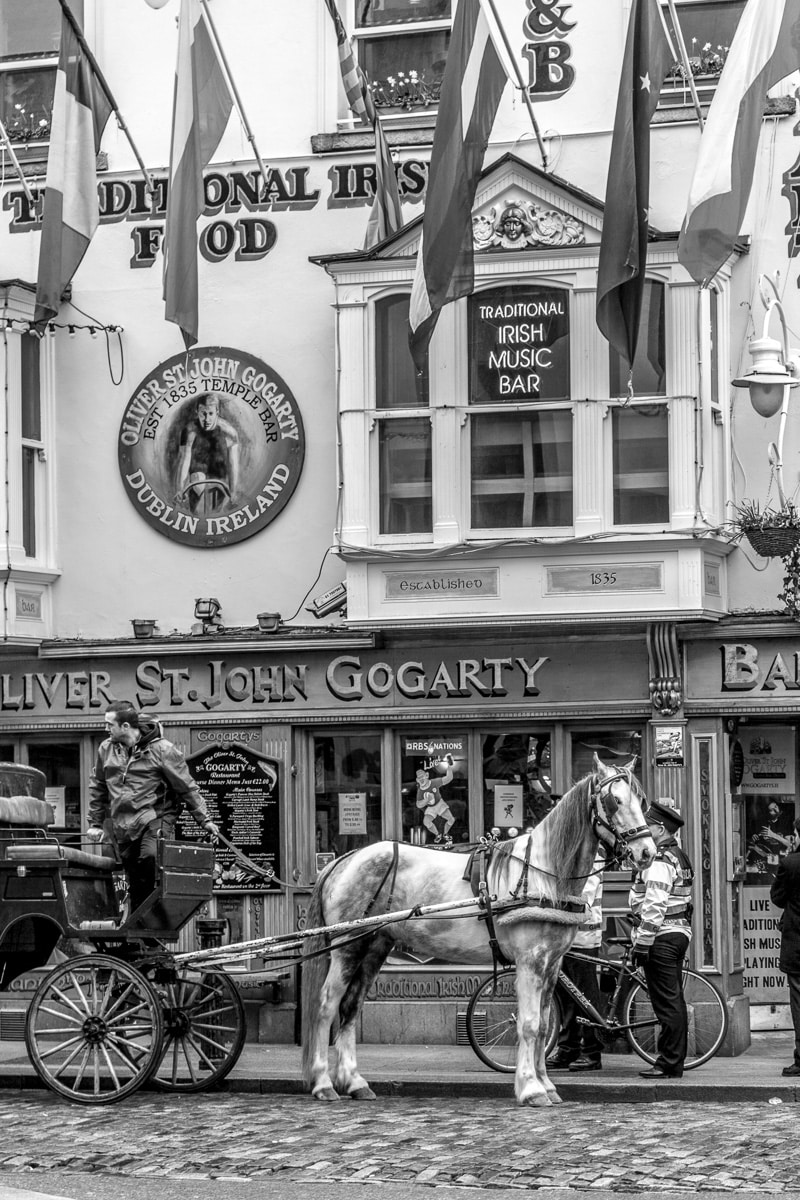 The day was far from over though. We ate in the apartment so we could be ready for the Traditional Irish Musical Pub Crawl we had signed up for. It turned out to be a great choice. Two excellent local musicians sang and performed acoustic music, and accompanied us to three different pubs where they continued to entertain us with their musical skills, humour, and stories. It was an experience well worth the €13 each.

The next morning started off with a bit of snow falling outside. We opened the curtains from our warm bed to see the flurries dancing about and collecting on the rooftops. Fortunately, it didn’t last long either in the air or on the ground. However it did remain cold. Locals tell us that it has been an exceptionally cold spring after a warm winter, yet the signs of spring are everywhere. The bulbs are pushing up through the soil and the buds on all of the trees and shrubs are ready to burst. 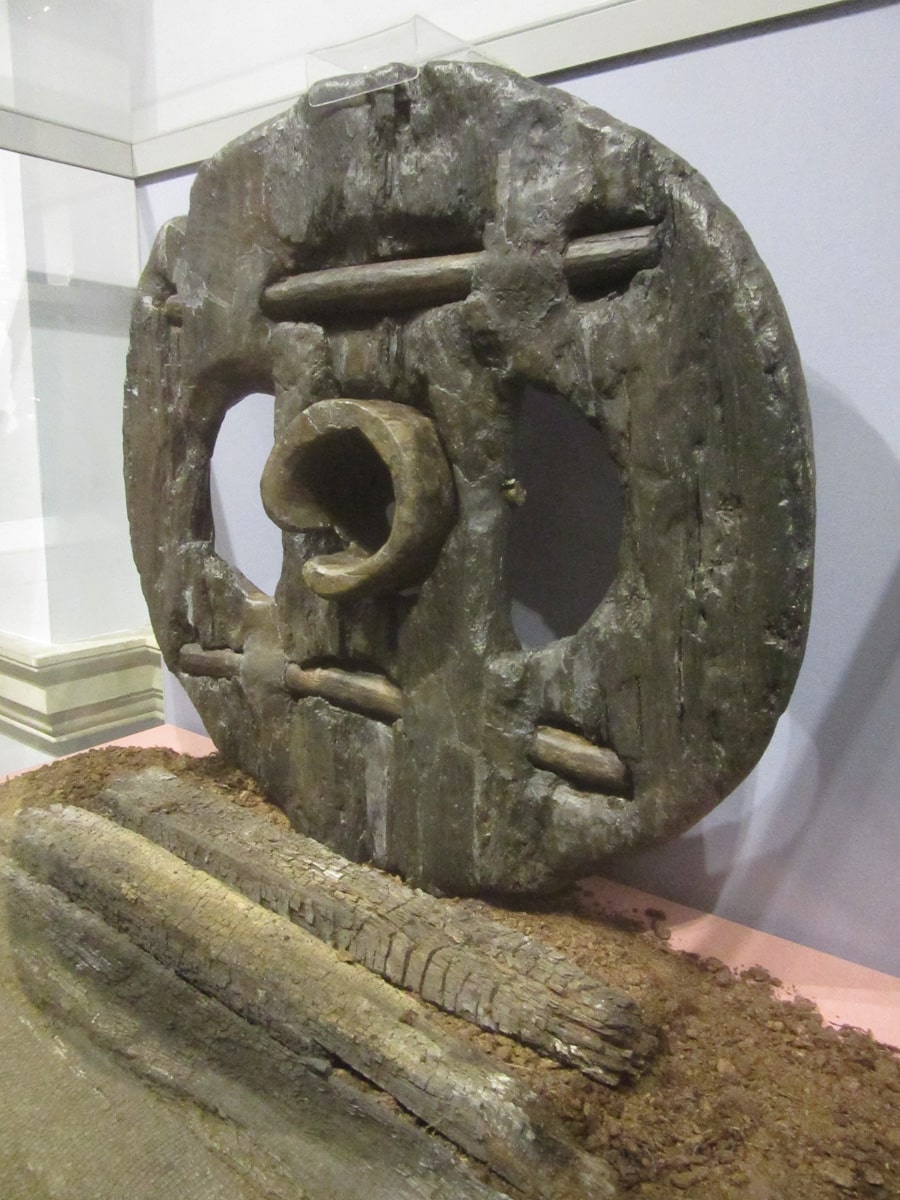 After a stop at the post office, we made our way to the National Museum of Ireland – Archaeology. Opened in 1890, the museum is housed in a grand Victorian-era building. The collections are remarkable, and some artifacts such as blades and points of flint and chert date back possibly as far as 7000 BC. The collection of prehistoric goldwork ranges in date between 2200 BC and 500 BC. Other items were well-preserved in peat bogs such as a 4,500-year-old logboat. 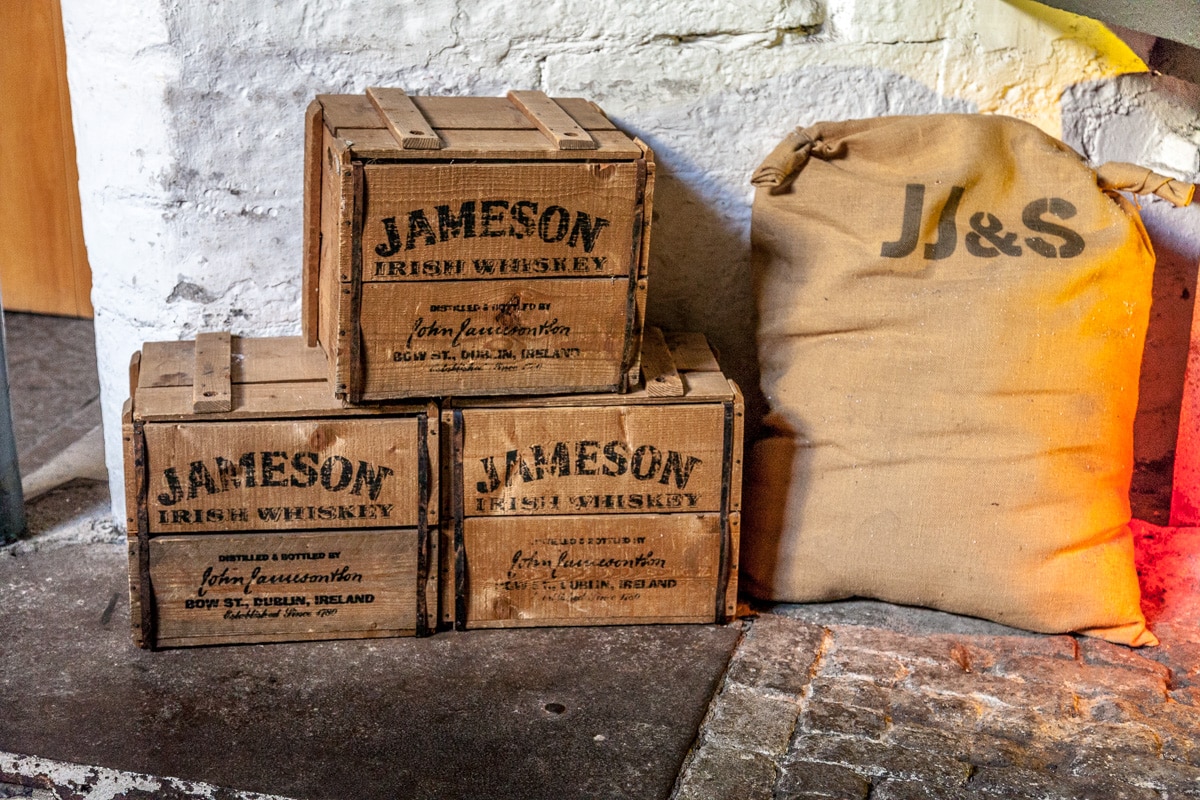 With only a few days here, we knew we wouldn’t be able to see or taste everything, but we were determined to get a good taste. One of the “tastes” was a tour of the Jameson Irish Whiskey Old Factory. While they no longer make their smooth product in this location, they gave a very good accounting of the history as well as a tour of some of the old facilities. Of course the tour ended with a comparison tasting of three different whiskies: a scotch (Johnny Walker), an American whiskey (Jack Daniels), and Jameson. Afterwards we were offered a drink in the tour bar area and sat with a man and his young daughter (who drank cola) from the Netherlands for a delightful conversation. 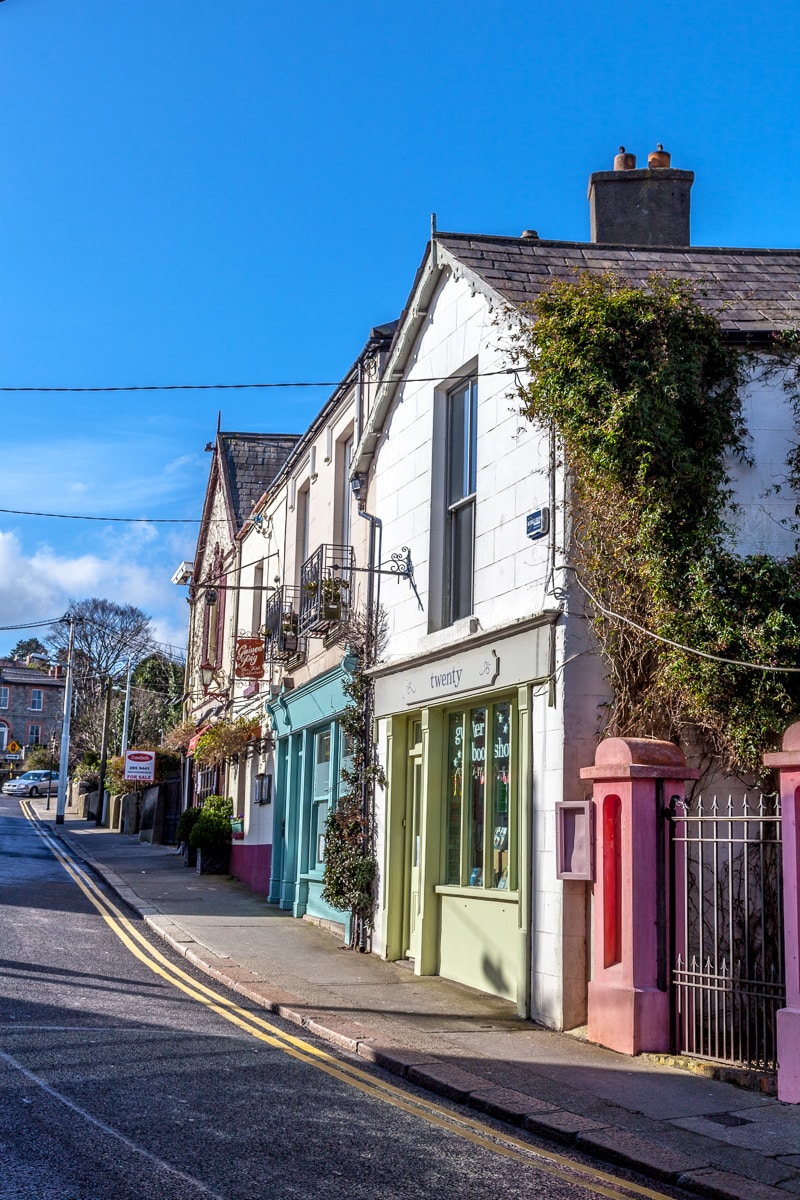 After the Jameson tour, we were sufficiently warmed to make our way back to the apartment to rest before going out for dinner. We ate at a nice local place just down the street, then decided to go to another local pub for some more music. The day had been long, and we had a day of hiking ahead of us on the following day.

One of our goals was to get out to the coast and walk along the Irish sea through one or two of the small villages. We took the train/local commuter rail to charming town of Dalkey where we picked up a couple of hot cross buns to snack on. Sitting on a bench in the church yard, the morning sun tried its best to warm us, but the day was cold and we quickly enjoyed the sticky buns before taking off on our walk. 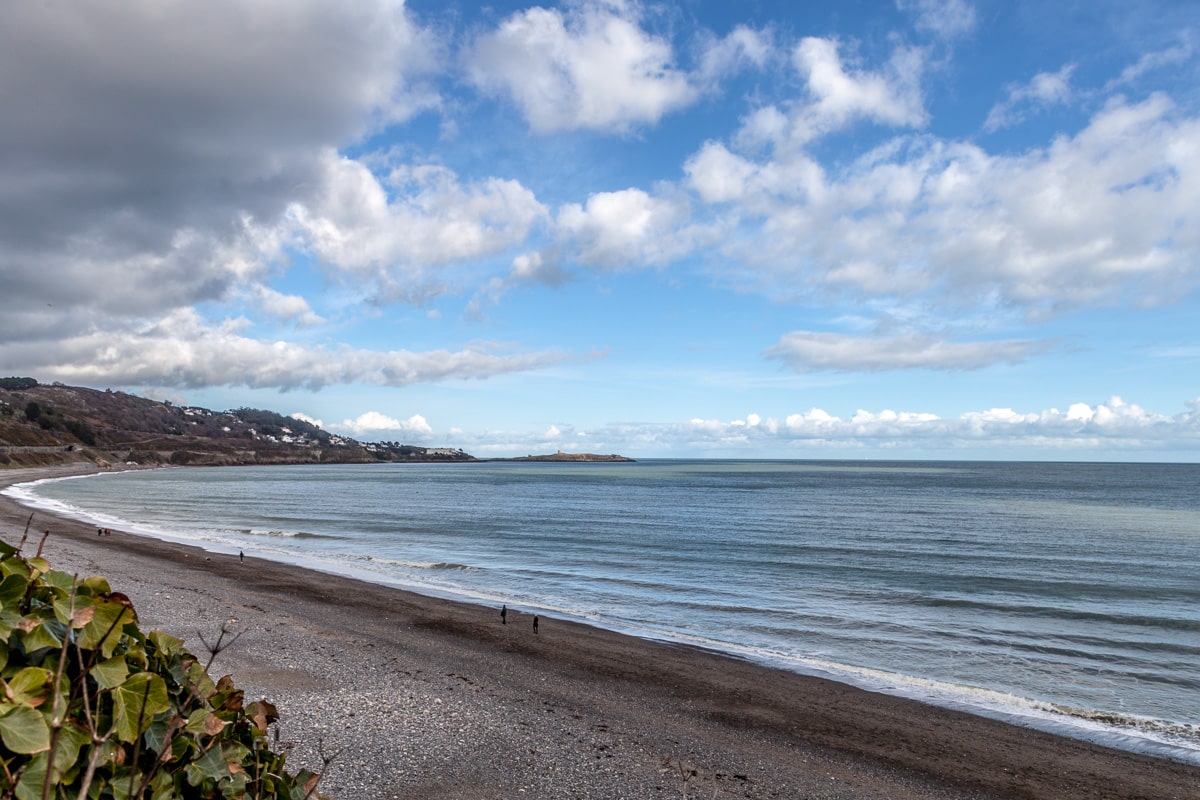 It turned out to be a beautiful day and we wandered down the coast to Killeny along busy roads, quiet lanes and through several parks. Although we would have rather wandered further, we needed to return to Dublin to pack and prepare to drive south to where we will be for the next five or so weeks. We are ready to be in the country and out of the big city. Next stop Killarney!