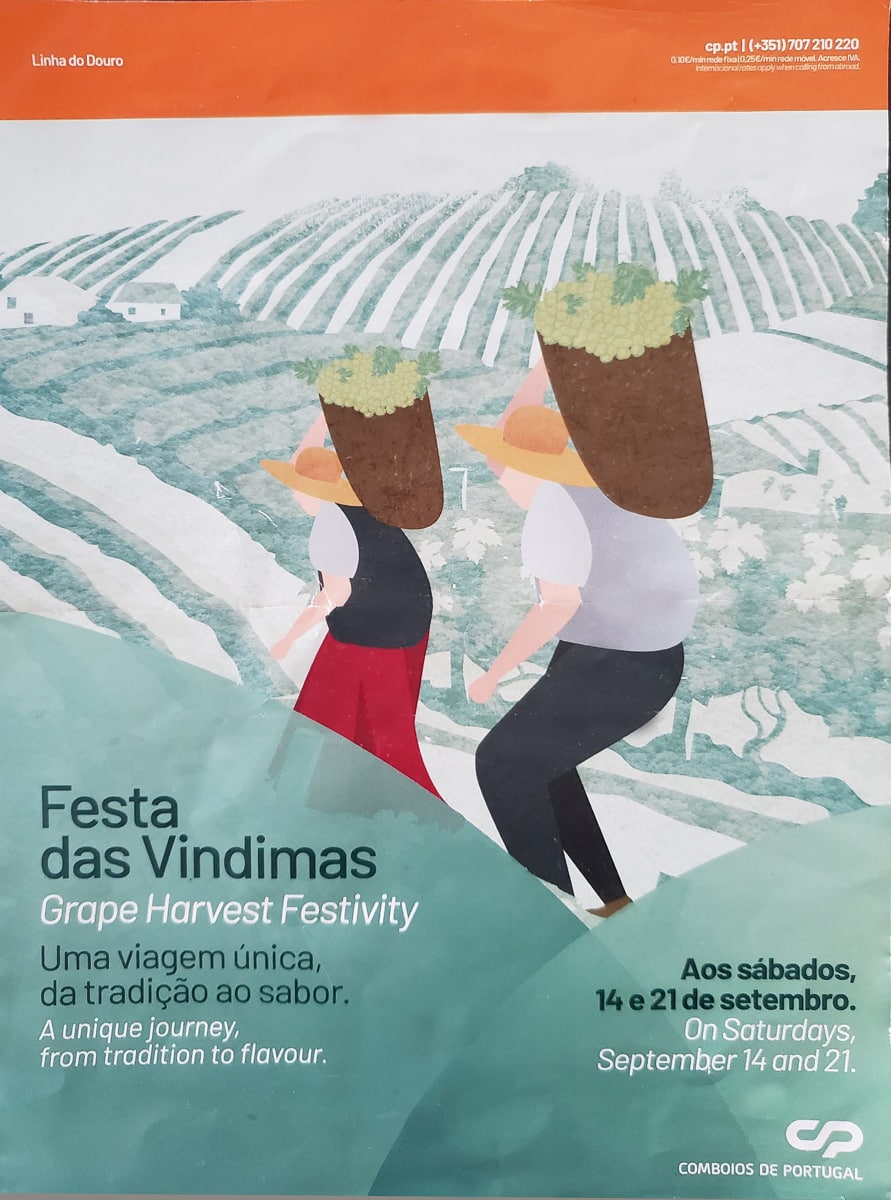 14 September 2019 – Well, we had gone to the São Bento train station to purchase tickets for one of our day trips, and we noticed a brochure on the counter at the ticket window. It was announcing a wine harvest festival up in the Douro wine region, and we were intrigued.

A couple of days later we scanned the tourist information sites and could find nothing about a wine harvest festival. Of course we initially assumed that it was being marketed towards tourists, and that it was a somewhat simple and reasonable way to ride the train up into the Douro valley, visit a quinta (the name for an agricultural estate, such as wineries, vineyards, and olive groves), and have a lunch, then take the train back. We were kind of wrong.

The reality was that of the 120 or more participants on the trip, there were only about 10 non-Portuguese. And of the locals who didn’t live in or near Porto, many traveled here just for this event, which is held only two days each year. 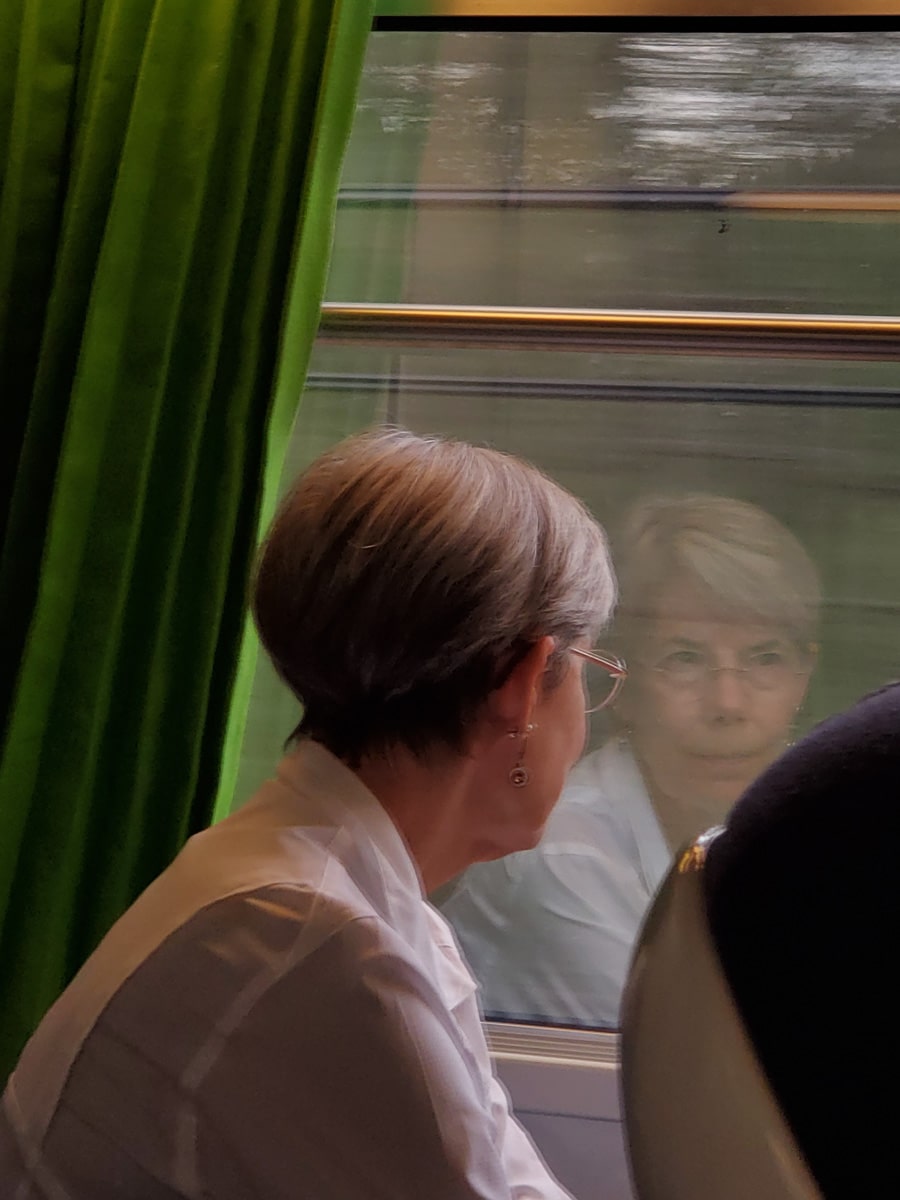 The first part of the transportation departed from Campanhã station was a special three-car arrangement that followed the Douro River inland through the steep slopes covered with vineyards and dotted with small towns and villages. It was onboard the train we met Doug and Colleen from Portland, and we chatted quite a bit along the way. When we arrived at the Pinhão Station, we transferred to three buses to travel up to the Quinta da Avessada in the mountains where the festa would be held.

The large buses moved slowly along the steep, narrow, curving roads, only encountering a couple of cars along the way.  The smaller vehicles had to pull in their side mirrors as they crept past, and there were several hairpin turns that were so tight we could almost read the license plate on our own bus. 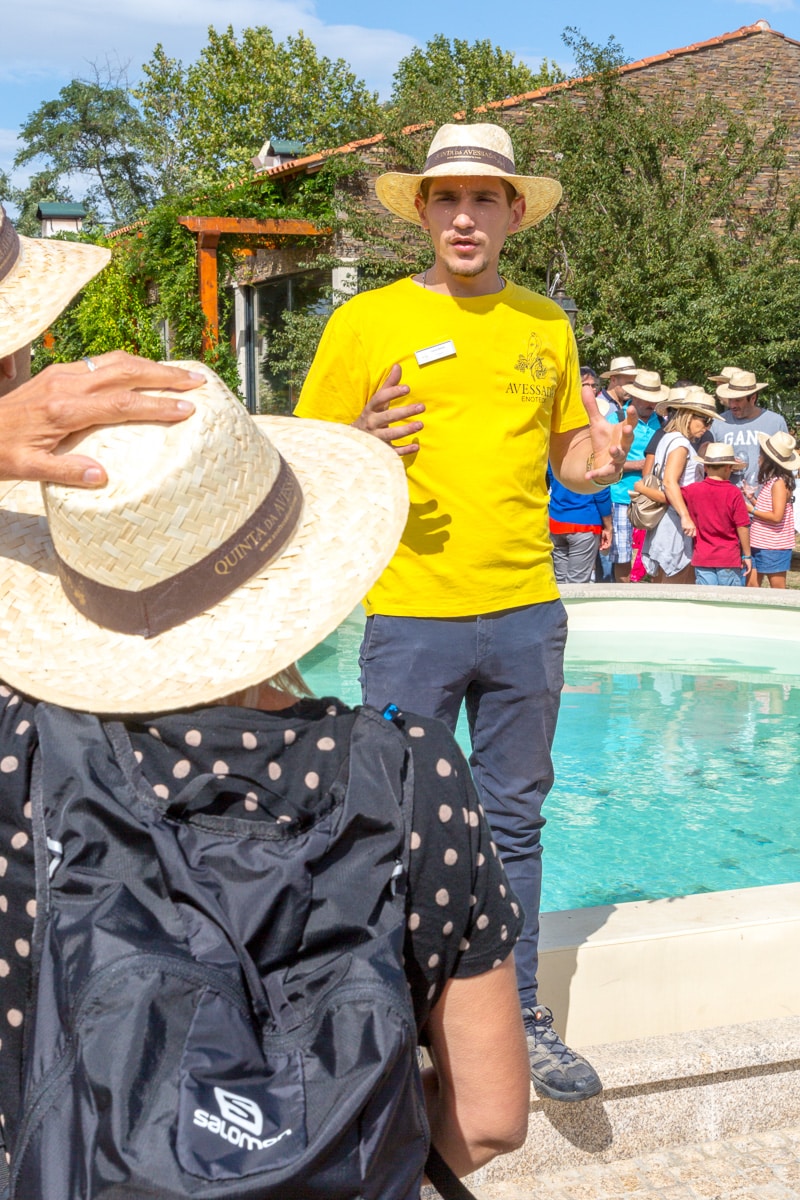 Once we arrived at the Quinta we were greeted with music and smiling faces.  From there we were taken to their large terrace garden overlooking the vineyards for freely-poured vinho branca (white wine), punch for young and non-drinkers, and delicious nibbles — cod fritters, empanada-like, meat-filled pies, mini ham sandwiches, and grilled pork ribs that were replenished as quickly as they disappeared. It was here that we met another couple, Andy and Linda from Portland.

Thus fortified, we were all given straw hats, buckets and clippers for grape harvesting, and then followed the accordion player to the vineyards. This Quinta is located on one of the few sites of flat land in the area, as most vineyards are on the very steep slopes typical of the region and must be hand-harvested. 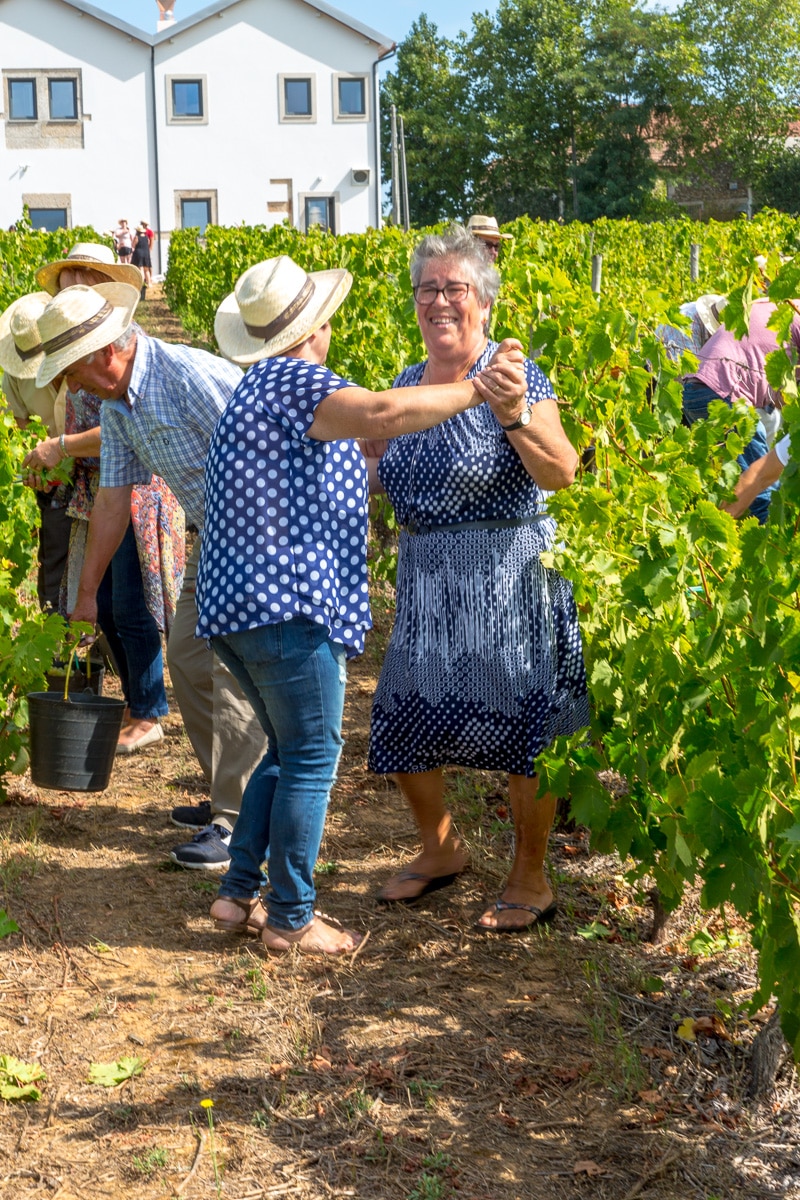 Just about the time we were beginning to get hungry and starting to eat grapes we were told to follow the music back for lunch. As previously stated, we were expecting a simple lunch with a glass of wine or two, but we couldn’t have been more wrong.

The Quinta da Avessa is a venue for many types of events, so they have the facilities to accommodate large groups, and as we entered the large hall surrounded by windows, the concept of a “simple lunch” vaporized.

There were about 12 large tables, each seating at least 10 people. On the center table were the sobramessas (desserts) on display around bottles of wine and large flower arrangements. All of us non-Portuguese speakers were seated at one table — Doug and Colleen, Andy and Linda, a couple from Canada, and two German gentlemen. 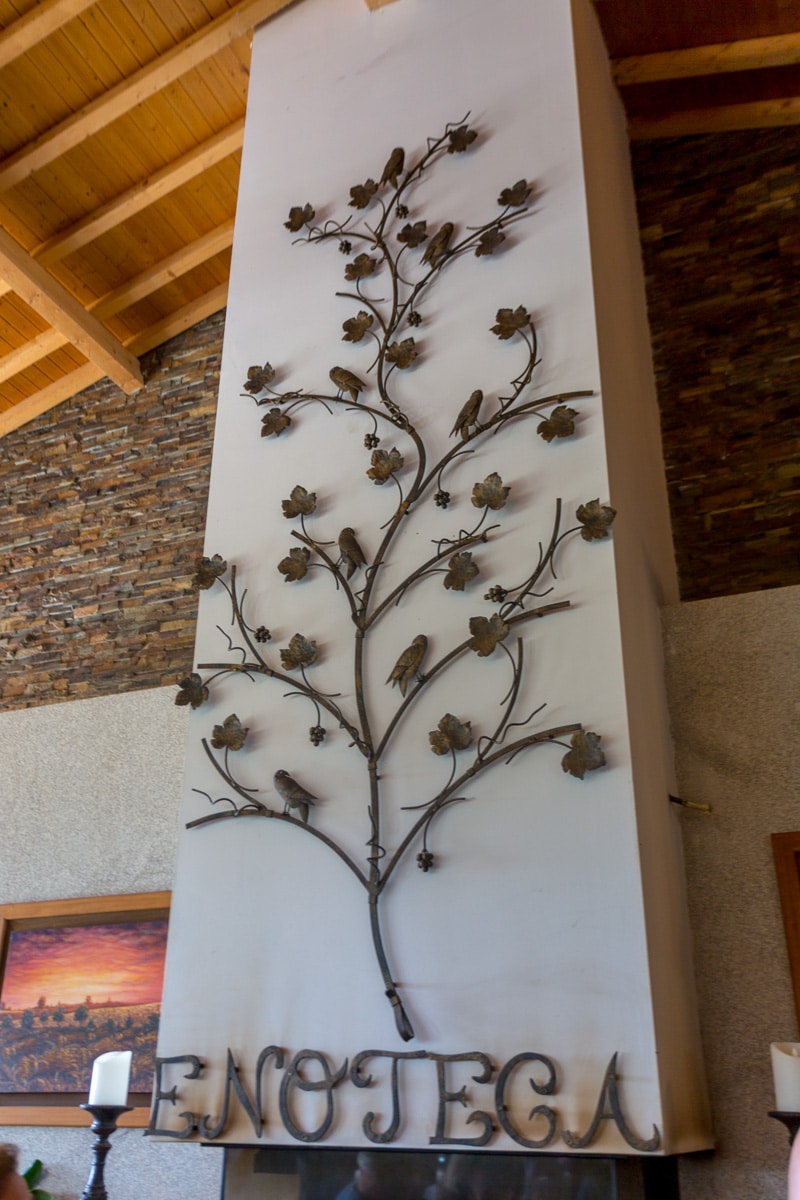 The entertainment began with some music and singing, and then an spirited skit between a woman and man, of course in Portuguese, and though the English explanation on the side was pretty brief, we did get the essence of the story.

Then appetizers were served, bottles of white wine, red wines, and bottled water were placed on the table (and replenished regularly). A large salad bowl was then served and passed around. After the salads were finished, a giant kettle of soup was brought into the room and distributed to the tables. The main course consisted of beef, gravy, sausage, roasted potatoes, cabbage and carrots, rice, and bread. As more and more food was brought to the tables and more wine was poured the conversation flowed, appetites satisfied, and a good time was had by all.

There was a break in the food service for some more music, and many couples took to the floor for dancing. And then the sobramessa (dessert) table was pronounced open. 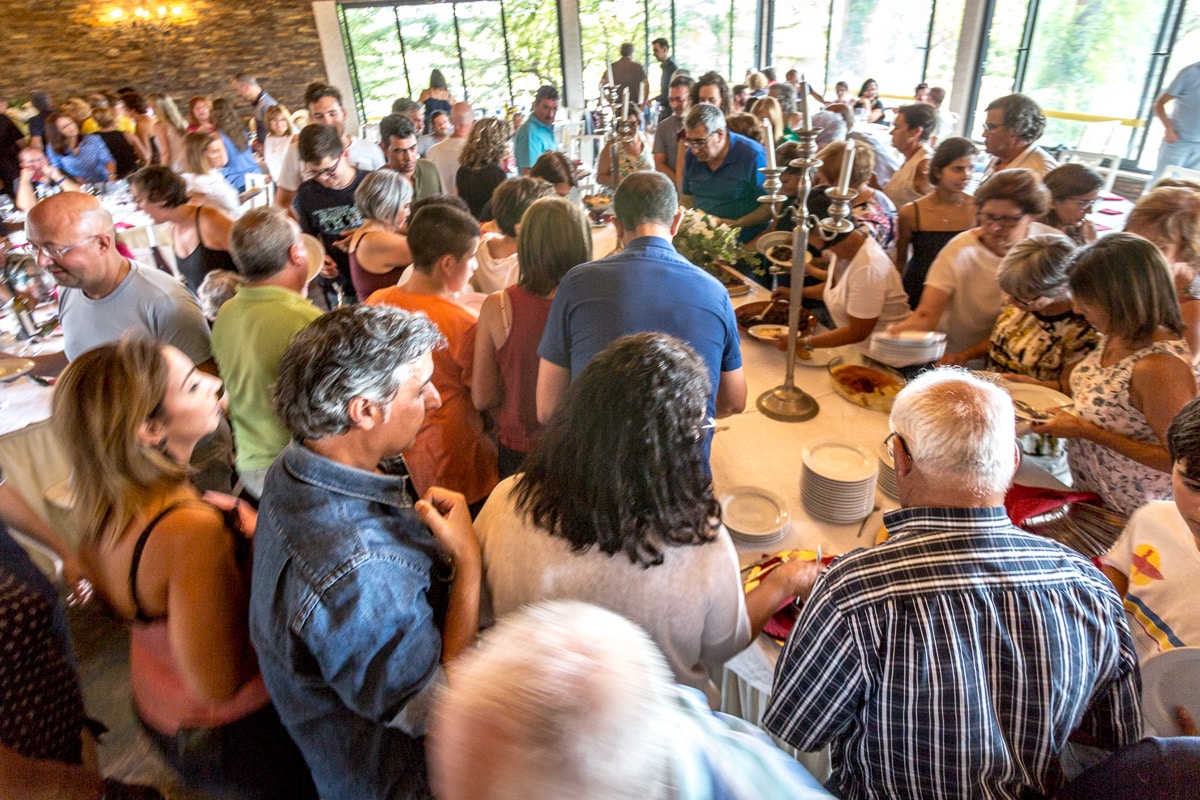 Chocolate cake, crème brulee, drunken pears, cheeses, sliced fresh fruit and a bowl of fruit cocktail filled the table, and it was quickly surrounded as people crowded in. There was no line or order followed here, simply a happy mob scene! As one serving plate quickly emptied, another was brought to replace it. Soon everyone had their fill, and the table was bare.

After that, coffee (espresso) was served, and then a small pour of their “firewater” (grappa) was offered to the brave as a digestif. 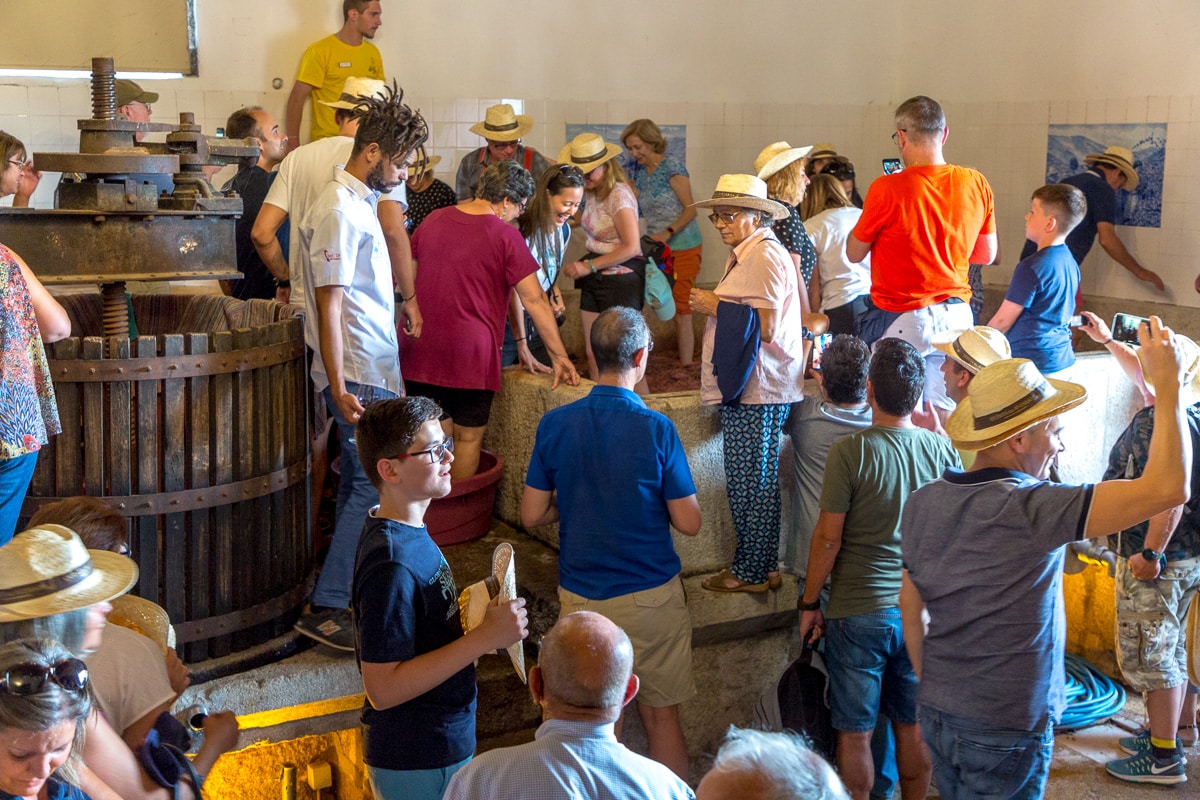 Slowly many began wandering outside to stretch and chat. Quite a number of the Portuguese could speak excellent English, (and we’re certain many others could as well) and we had some very pleasant conversations. However, we were interrupted to go to the cellars for grape treading (“stomping”) of the grapes that we had harvested earlier.

It had been recommended to wear appropriate clothing for this activity and those that wanted to experience stomping the grapes removed their shoes, rolled up their pants, rinsed their feet, and waded into the vats. Music was playing as many danced on the grapes, and after a while the grapes were well stomped! Then, feet were rinsed, shoes put back on and pants rolled back down, and we all slowly migrated into the enoteca for a muscatel tasting. 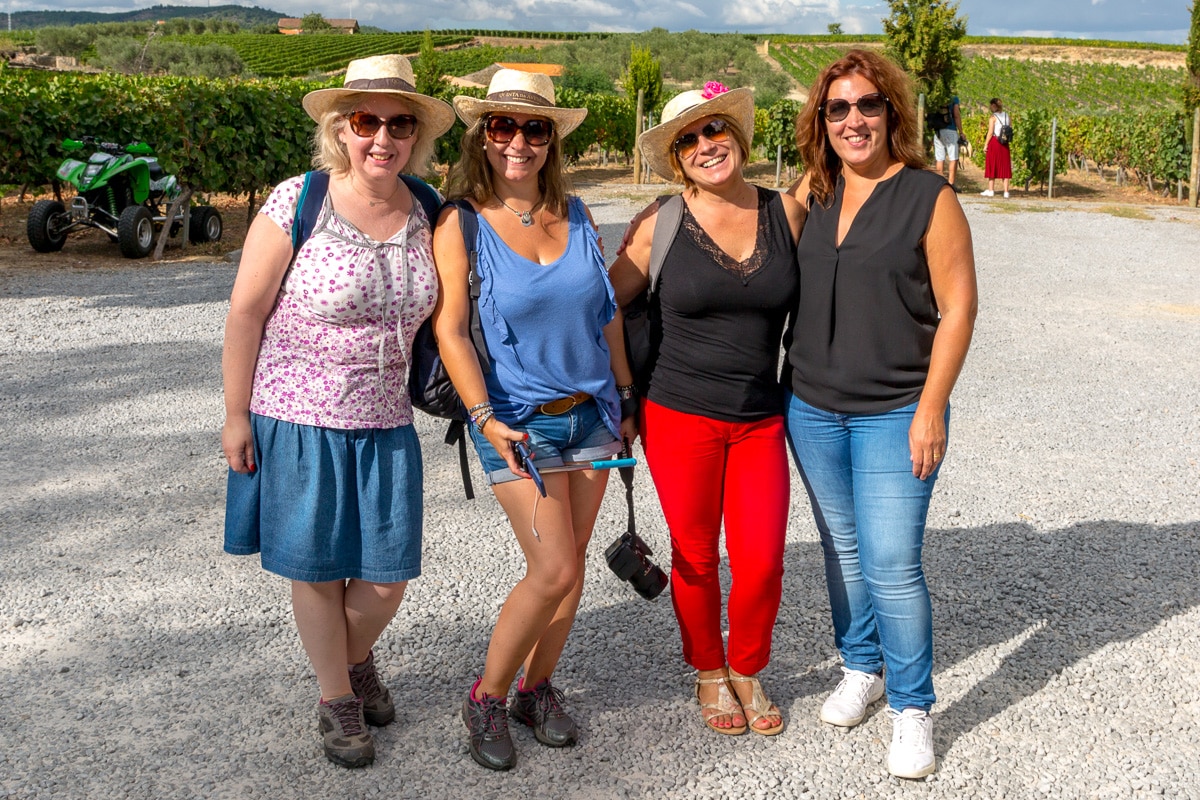 After tasting the Quinta’s excellent muscatel, we roamed outside and Chris offered to assist with some group photos. A conversation began with several other residents who spoke English, They were on a work outing.

It soon became time for everyone to board the buses to return to Régua where our train was waiting to return us to Porto. The road down was just as stunning as the route up, with vineyards on nearly every inch of ground. On the bus we had conversations with several of the people in the seats around us. They spoke some English and we tried our best at speaking our very inadequate Portuguese. Still, the attempts were appreciated and we all had fun making the connections. 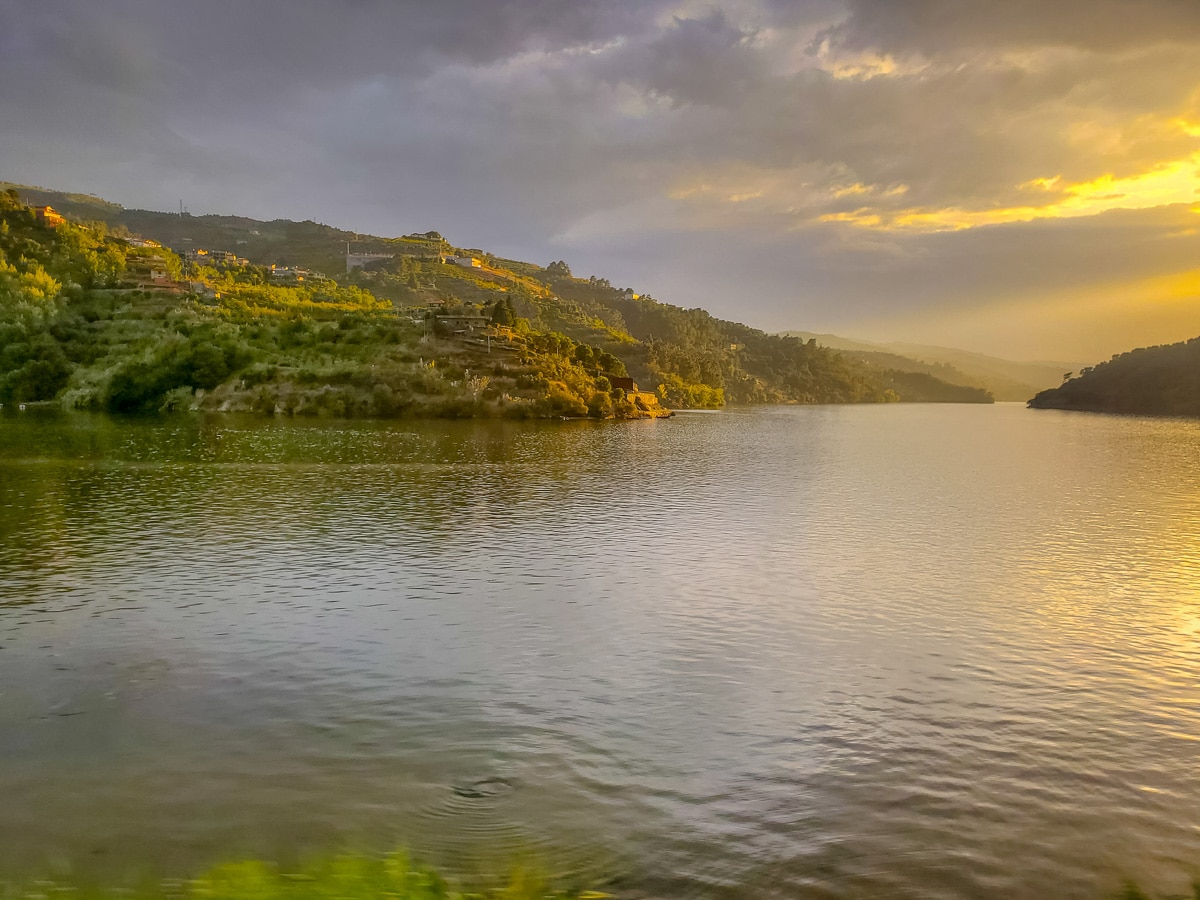 We were tired and heavy-headed as we boarded the train, though a group of Portuguese friends in the middle of the car continued the merriment with lots of laughter. Night fell as we were in transit, providing additional beautiful sunset views of the Douro River making its way to the Atlantic at Porto.

The gentle rocking of the train and the rhythm of the tracks nearly lulled us to sleep before we reached Campanhã station. Once there we said farewell to Colleen and Doug, (Andy and Linda had departed at an earlier stop), and to our Portuguese friends, and then took the metro home. What a day!

There was no need for dinner after the day’s feast, just a shower and a night’s sleep spent dreaming of grapes, food, too much wine, and new friends.