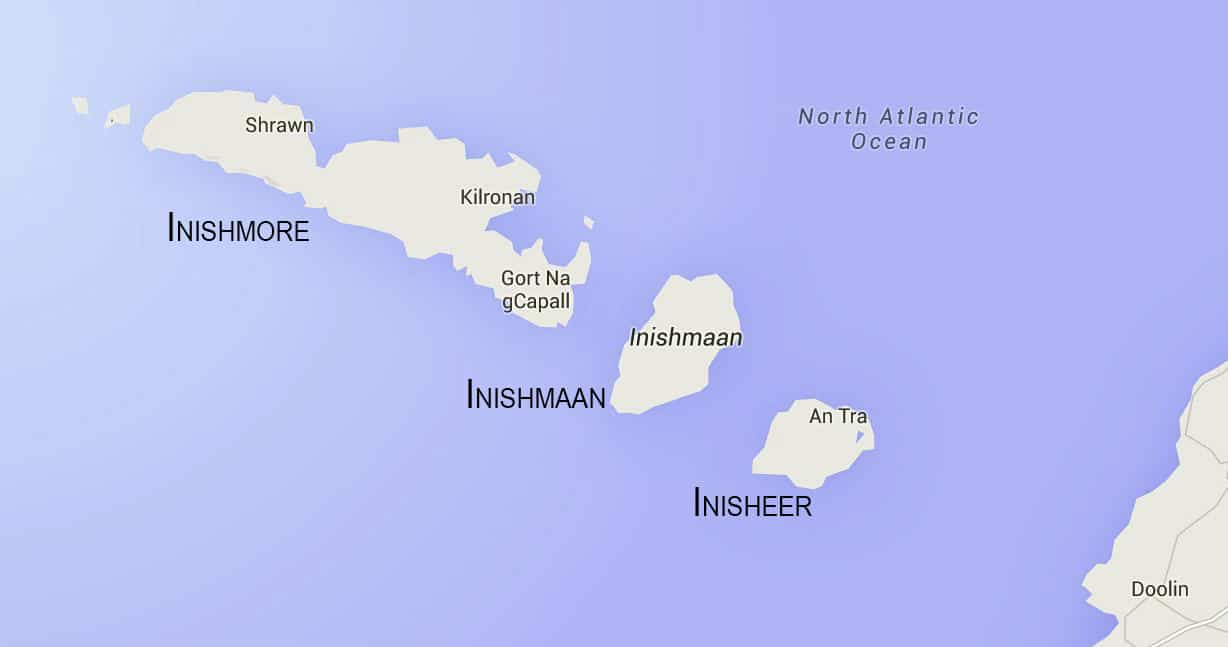 If you stand on the Cliffs of Moher looking seaward and it is somewhat clear, you can see the three Aran Islands. They are geologically an extension of the Burren, as they have the same underlying layer of limestone pavement.

Inisheer (Inis Oírr) is the smallest (8 km2 | 3.1 sq mi), and most eastern of the three islands, and a little less than 10km | 6mi across open water from Doolin’s small port. The ferry took only about 30-minutes, and the day was generally overcast. 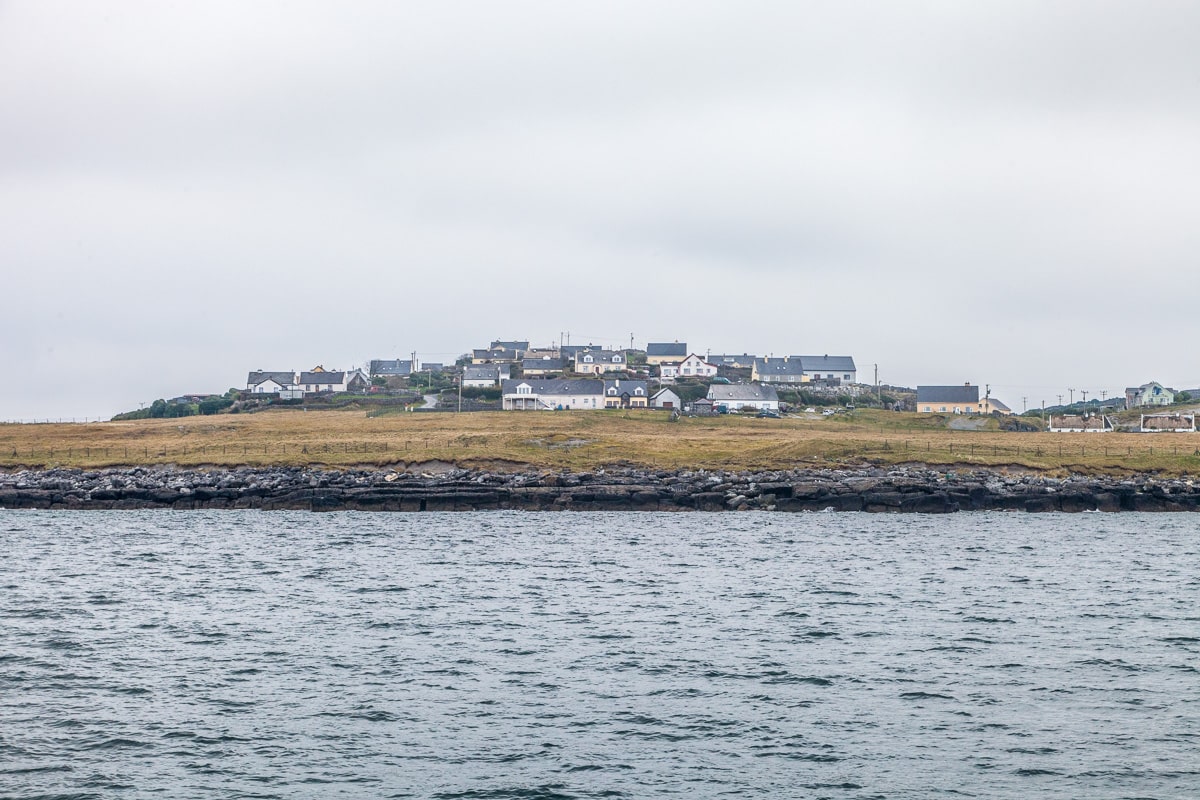 Arriving at the island’s small dock, we disembarked and were greeted by several horse-drawn cart owners interested in giving a tour. However as much as we would have liked to support the local business, we declined, having a need to walk.

Inisheer is a charming island with a population of about 300. Colorful homes dot the countryside within a lacework of stone walls. In fact, the density of stone walls is remarkable, and they seem to cover the entire island. 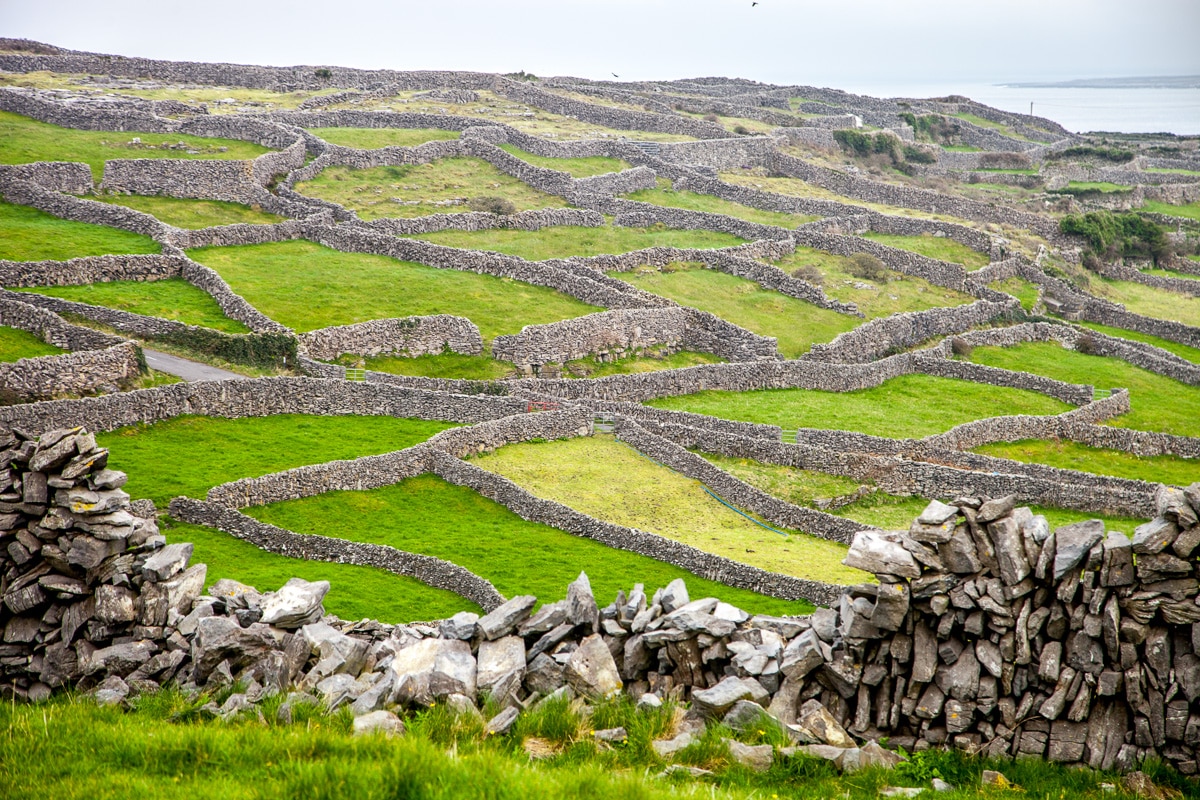 Built during the clearing of fields of stone, the walls are quite beautiful, with interesting designs incorporated into their construction. It is most likely that what we see as artful design is, in reality, necessary engineering for the strength and integrity of the wall. Nonetheless, many are pleasing to look at. 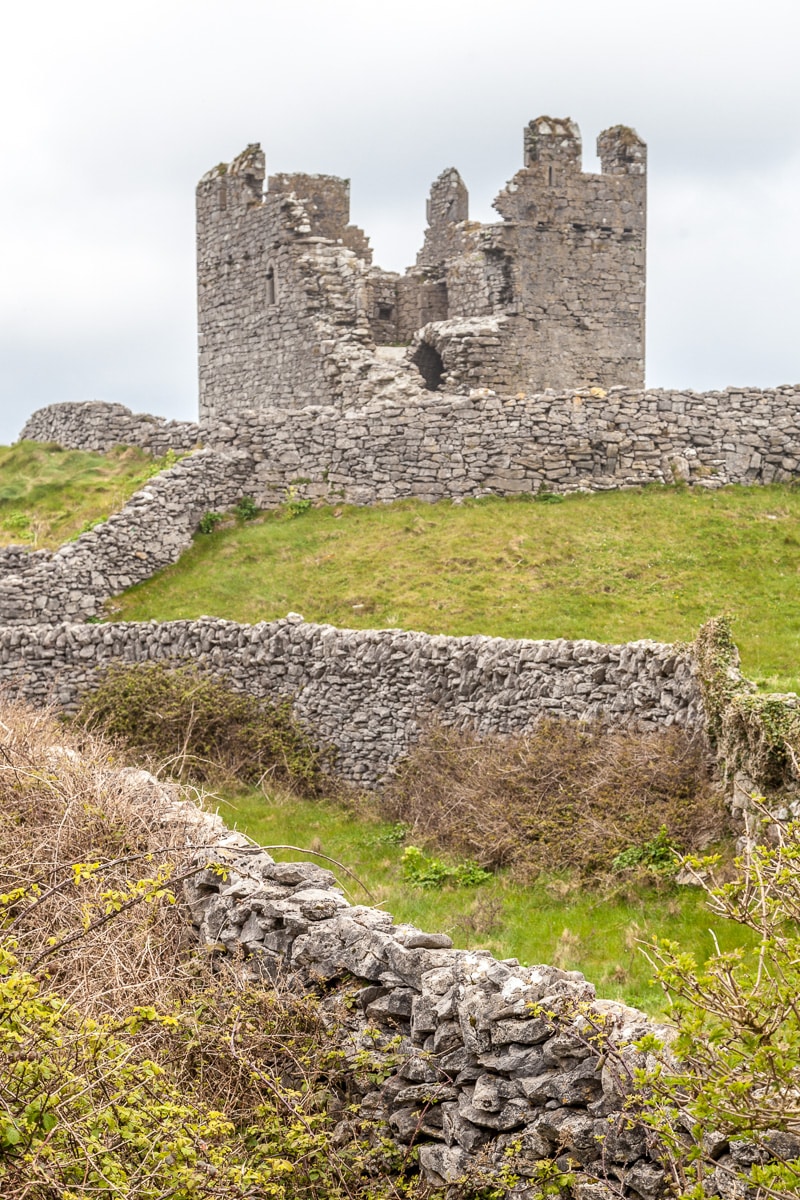 We threaded the steep, narrow, walled lane up to where the remains of a 15th-century O’Brien stone fort stands near the Island’s highest point. Its commanding view provided the O’Brien’s a strategic position for guarding the bay and harbor of Galway against pirates and coast plunderers. From this vantage point we were able to peer over the stone walls to the island’s coast where the modern lighthouse in the distance now offers protection for the craft passing the island.

However, it was the walls that fascinated us as we wandered up and down and through the countryside. Often, we were practically unable to see anything but stone wall, but as the terrain changed we could look out over multitude of small walled plots. 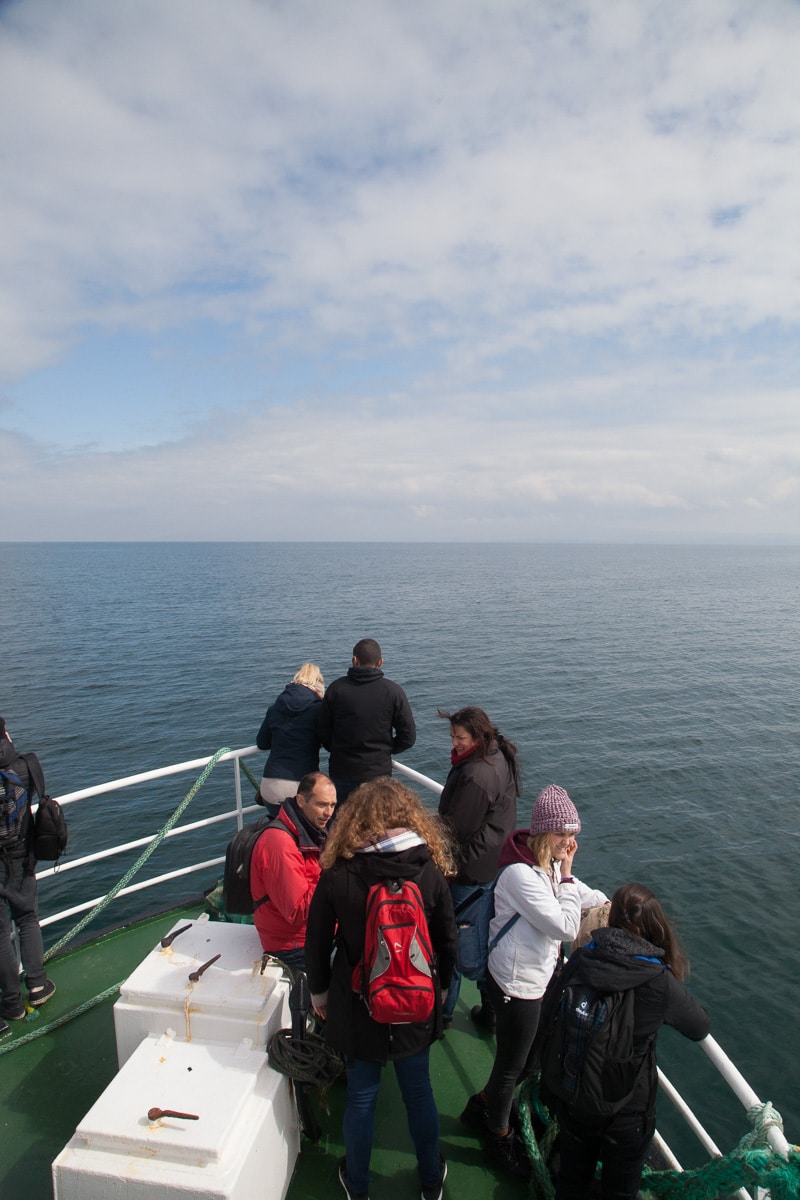 As the hour approached to return to the ferry for the next leg of the day’s travel, we stopped into Tigh Ned, one of the three pubs on the island, for a brew and a bite. Though there weren’t any fresh seafood specials available due to the previous several days of very bad weather, we each had a delicious hot panini with chips (French fries) and I had a Guinness and Jeannie a wine.

After lunch, we boarded the ferry for the return to Doolin, but the route would first take us over for a view of the Cliffs of Moher from the water. Fortunately the weather had improved and the skies cleared giving us a rather sunny afternoon with which to see the cliffs. 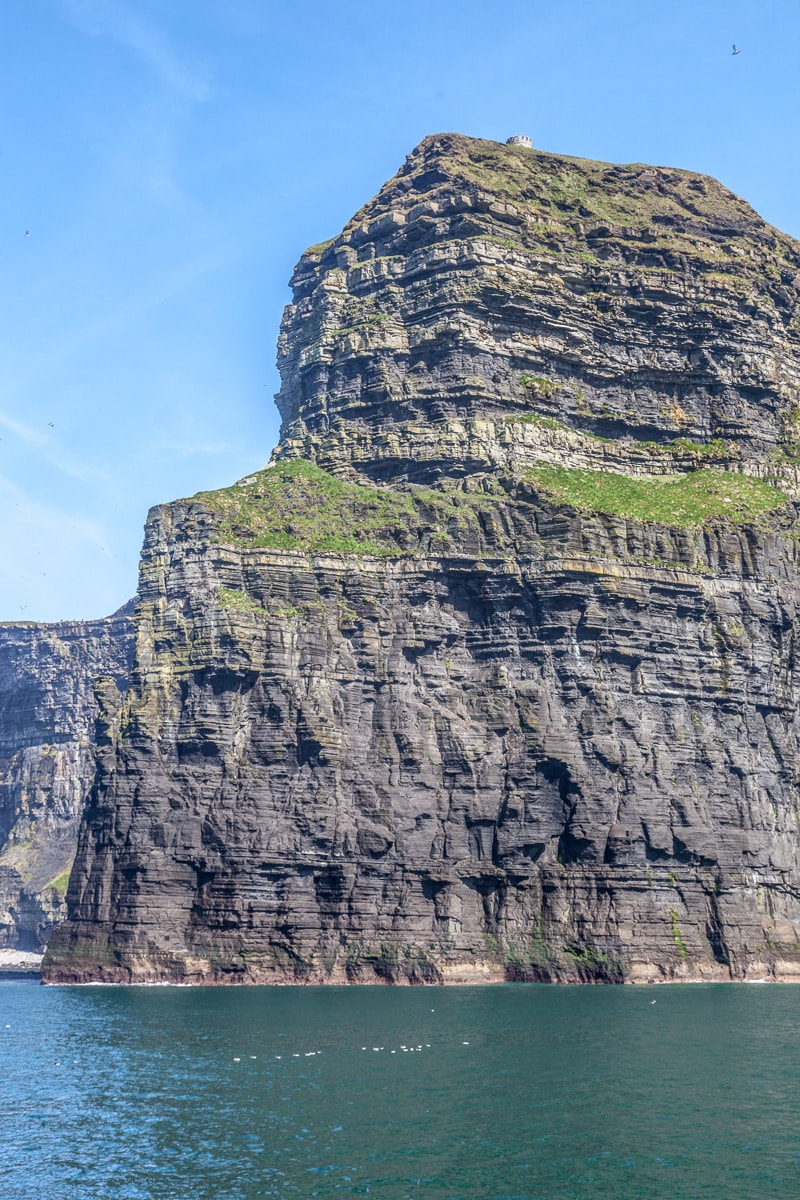 As we approached, the immensity of the rock face again staggered the mind. Sea birds became more numerous both in the air and in the water. It is estimated that some 40,000 birds inhabit the Cliffs of Moher. Guillemot, Razorbill, gulls, puffin and shag are just some of the species that nest and feed at the Cliffs. 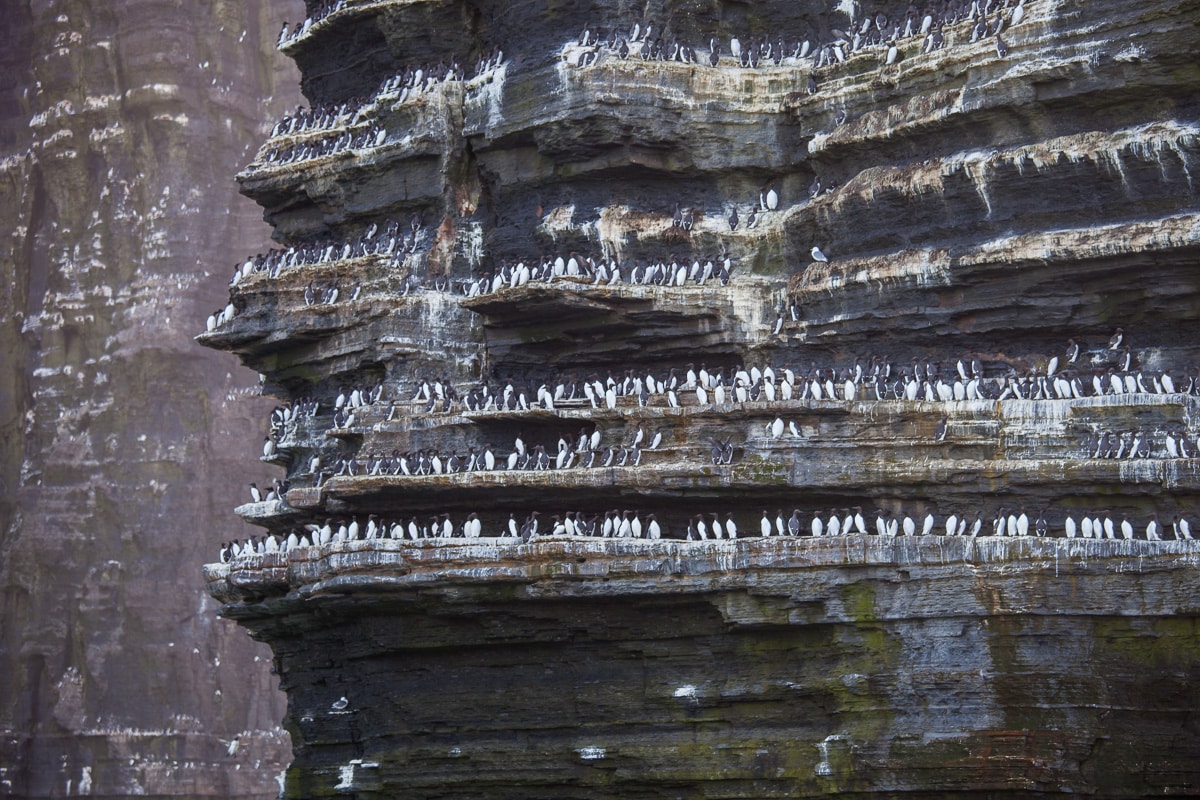 Closer still, we could make out the birds, thousands of them, lining the rocks and crevices of the cliffs and sea stacks. Here there were even more birds in the water as well, and since the seas were very calm the boat was able to get in close. It was as amazing a sight as the cliffs themselves.

However, it was time to return to Doolin. It had been a remarkable day but we were ready to return. Besides, we needed to pack for our departure to Kinnitty and the Slieve Bloom Mountains tomorrow.